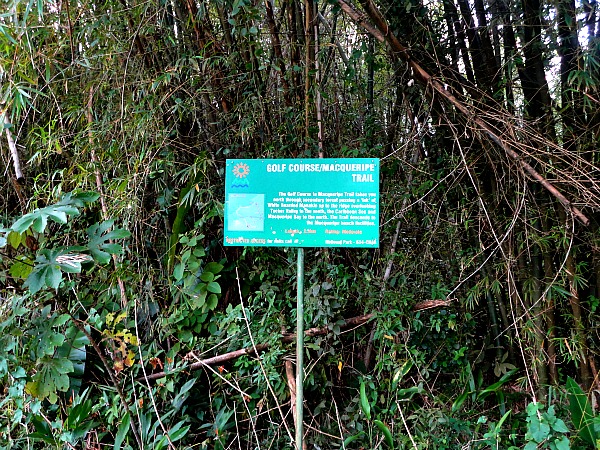 More adventure than we bargained for at Macqueripe Beach

Who could forget the timeless Gilligan Island theme song with the repeating “three hour tour” line? On a hike through the Trinidad jungle on the way to Macqueripe Beach Chaguaramas National Park in Trinidad & Tobago I was reminded of this unforgettable TV show. The sign to Macqueripe Beach in Chaguaramas National Park said “a 2.3 kilometer hike, a 2.3 kilometer hike.”

We arrived on Saturday at the Trinidad & Tobago airport and after clearing customs we were met by the Skipper who currently lives in the island Republic. The Skipper picked me and Gilligan up at the airport. Even though it was nearing midnight we were soon drinking on the streets of Port of Spain until 5am.

The next day we awoke fuzzy and tired from a day of travel and a night of drinking. We had nothing concrete planned for today. It was actually the day before Carnival and not a hung over American was stirring in the Skipper’s house. We finally emerged, and the Skipper said, “hey, are you interested in going on a 2.3 kilometer hike, a 2.3 kilometer hike to a beach.” We were soon on the road heading for Chaguaramas National Park.

We were soon walking through a beautiful forest with huge bamboo trees. The trees were actually planted by the U.S. army and non-natural to Trinidad & Tobago. At times the trail split through narrow mazes of the giant grass. 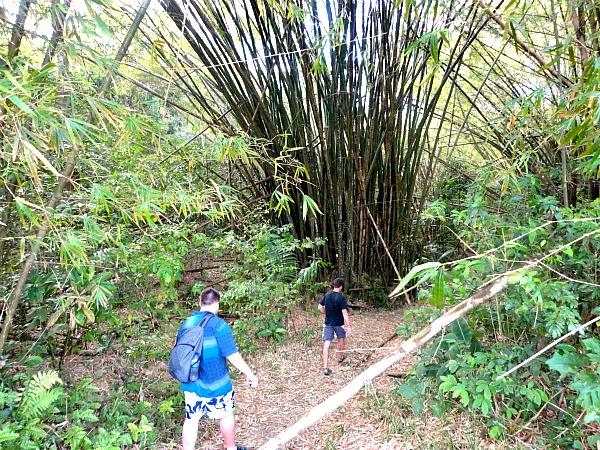 We soon started to gain elevation on to the ridge that ran along the coastline. Gilligan struggled to keep up even with his new vibrams he bought for the trip. The elevation was substantial although nothing crazy. As soon as we topped the hills we followed a ridge with amazing views of the ocean on one side and the jungle and hills on the other. 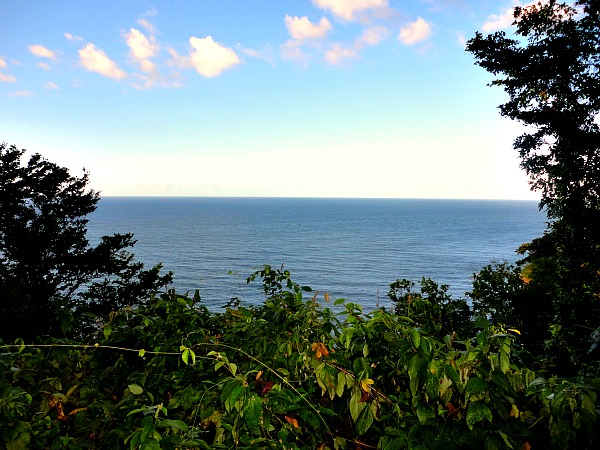 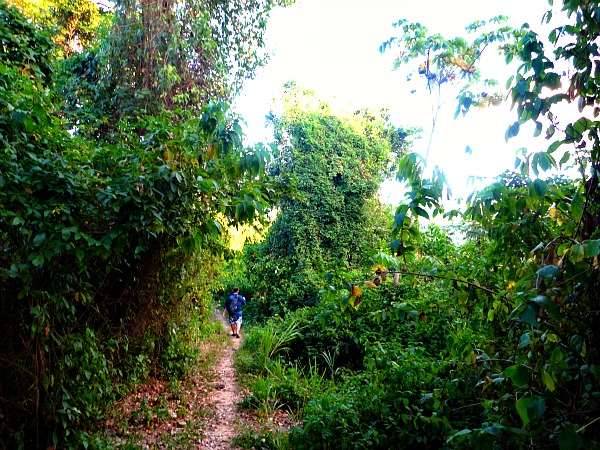 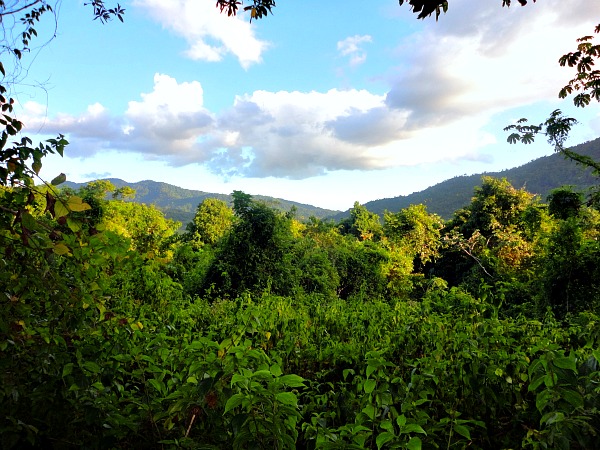 We descended down the other side and ended up at Macqueripe Beach Chaguaramas National Park just as the sun was setting. Since we slept most of the morning after a 5am night we did not get off to an early start. The sun pierced through low lying clouds just above the coast of Venezuela and provided a beautiful backdrop to our evening dip. 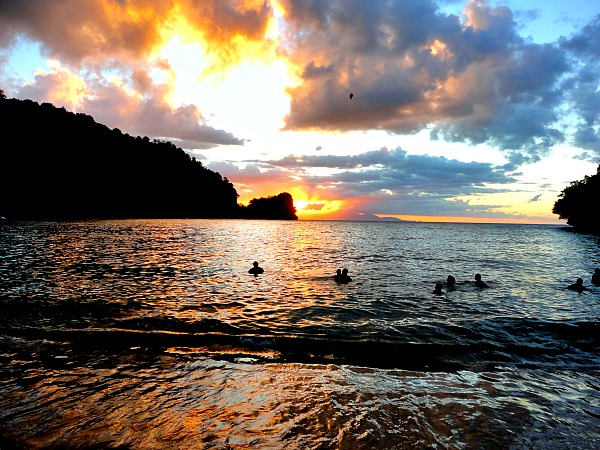 We swam for 15 minutes, but time was not on our side, so we knew we had to hike back the 2.63kilometer trail, the 2.3 kilometer trail back to the car. The road actually came to the beach, but we decided to park at the golf course in order to make the beach a midway point for the hike.

Gilligan was feeling a little tired after the exertion, the previous night’s activities, and the long day of travel the day before. We decided it would be a good idea to leave him here. We could then hike back quickly, get the schooner, and return to pick up Gilligan. We knew we were going to be hiking in the jungle in the dark, and with Gilligan in tow the Skipper and I would go slower, and we were concerned about him possibly tripping and spraining an ankle, which is easy to do when you are tired. 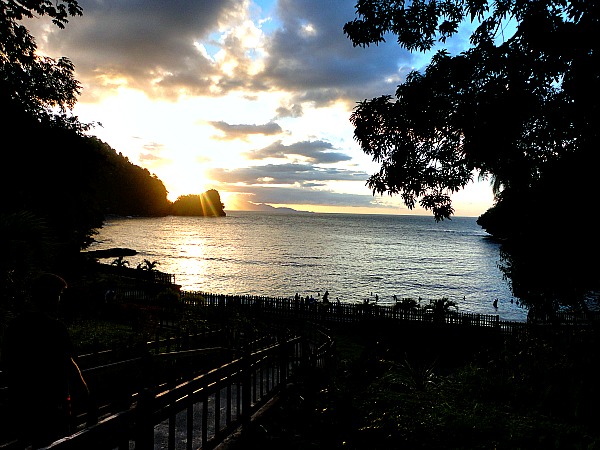 We took off and hiked up the hill back to the ridge line. We made good time as the sun set and the jungle became instantly almost pitch dark. The Skipper then turned to me with his head in between his hands in frustration and said “Gilligan has the key, Gilligan has the key.” We stupidly forget the car key in Gilligan’s backpack and now we were already more than halfway to the car. 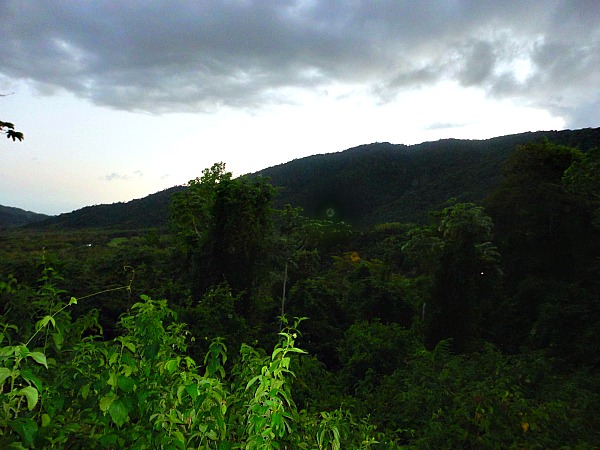 Macqueripe Beach Chaguaramas National Park – Night was falling on the author, the Skipper, and Gilligan

There was no turning back in the near pitch dark. We arrived back to the parking lot to our now useless car. The only option was to walk back to the beach via the road. About a mile up on the road was a playground. We had walked a mile up to this point and just about the time we reached the parking lot a light pulled out and headed the other direction. We just missed a possible ride.

Two miles of walking later my feet were pounding. I also had worn vibram shoes, and they did not do so well in the rooty and rocky jungle trail. My feet felt chewed up, and now they were getting hammered on the hard pavement.

We finally hit a fork in the road and turned left. The Skipper had instructed Gilligan to start walking until he reached a fork, so theoretically he should have been at this point, but no Gilligan. We started yelling his name and only the yelps of dogs echoed from the woods. Soon, the source of that yelping became apparent.

“Wild dogs,” said the Skipper. They charged us and their barks became louder. I yelled “stay,” and the Skipper did a mock charge. This was enough to keep them at bay. Up close, they were not as threatening as they were not much bigger than beagles, but my heart raced when I first heard those frightening words.

Other worries started to filter through my mind. Trinidad & Tobago is not the safest country in the world. What if Gilligan was in the wrong place at the wrong time and ran into an unsavory group of locals. Fortunately, we approached a light, which was the beach parking lot, and Gilligan finally returned our calls. We were reunited with Gilligan and more importantly, the key.

Now we just had to walk about 3-4 miles back to the car. Immediately a pick-up truck passed us by, and we were able to wave them down. Even though the local language is English, we could not understand a word the people spoke in the truck. They seemed friendly and we finally realized they were telling us to jump on. They had a pickup truck completely encircled with fencing. We hopped up on the bumper and grabbed on to the railing. I was in the middle, and I was afraid the back would give way and throw me off the back, so I had to awkwardly reach over and hold one of the sides.

We soon reached the crossroads, and we got the dudes in the truck to stop. We were still two miles away from our car. Since we had trouble understanding the guys in the truck we figured it would be too difficult to ask them to take us back to our car, so we resigned ourselves to another two miles.

We walked about ten minutes when a mini-van with flashing blue lights approached. It was the rangers from Macqueripe Beach Chaguaramas National Park. They stopped and said they were locking the gate. We told them we were walking back to our car, and they invited us to hop in. They kindly drove us back to our car, and the 2.3 kilometer hike was finally over. Sometimes, when hiking with the Skipper and Gilligan, the adventure turns out to be more than you bargain for.

Don’t split up unless you have to

Don’t adventure travel with people named Gilligan and the Skipper