You know those trips that are kind of disasters, but make the best stories and memories afterwards? We had one of those experiences when we visited Costa Rica and the La Paz Waterfall Gardens during the end of the rainy season in December. The only difference was, we knew during the experience was a once in a lifetime event as it happened despite the difficulties. 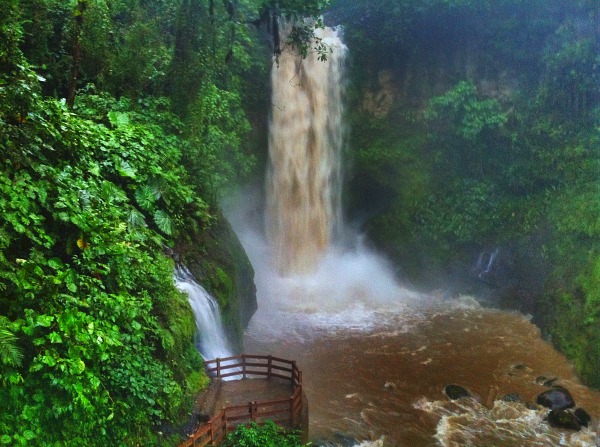 During our last day in Costa Rica, we booked a tour to Poás Volcano and La Paz Waterfall Gardens with our hostel, the Alajuela Backpackers. Our first stop was the volcano where we were fogged out from any appreciable views. While at Poás, we received some disturbing intelligence from other Americans we met at the crater overlook. They said it was absolutely pouring at La Paz. At the volcano it was raining, but not too bad. I thought these Americans were just panic mongers as it could not be that much worse at La Paz since it was not too far away.

We arrived at the La Paz Waterfall Gardens to a drenching rain. I would not say it was pouring, but it was a steady soaking rain. The information gleaned at the volcano was correct. Our guide dropped us off at the entrance where we paid the steep $38.00 entrance fee. We then walked into the gardens. The walking in the park is self directed although you can choose to hire a guide. There is no need to hire one from a safety stand point, but if you want local information, it never hurts. We had a guide who drove us here, but he did not accompany us inside. 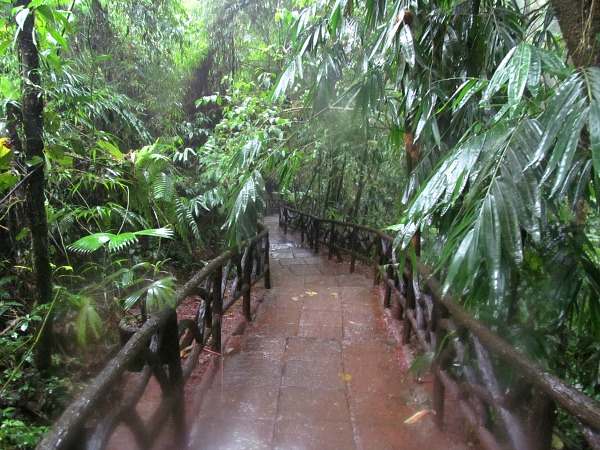 Descending into the waterfall fury

The La Paz Waterfall Gardens are basically half zoo and half hike down a gorge past waterfalls. We took our time walking through the zoo part first. They had a huge room devoted to butterflies. Apparently it is the largest of its kind in the world. They also had big cats including jaguars and pumas. Our guide was very excited for us to be there during feeding time for the cats. We were less than enthused about the timing. While zoos can be kind of interesting, it is not really my thing. The best part about this zoo was that some of the exhibits were inside where it was dry. We lolly gagged in the butterfly area hoping the rain would stop. It did not.

We had about an hour left, and we had had our full of animals in cages, so we headed towards the waterfalls. If it was possible, the rain actually intensified. On top of that, it was not that warm. Costa Rica is a tropical country, but La Paz is halfway up a mountain. It was not much more than 60 degrees Fahrenheit. 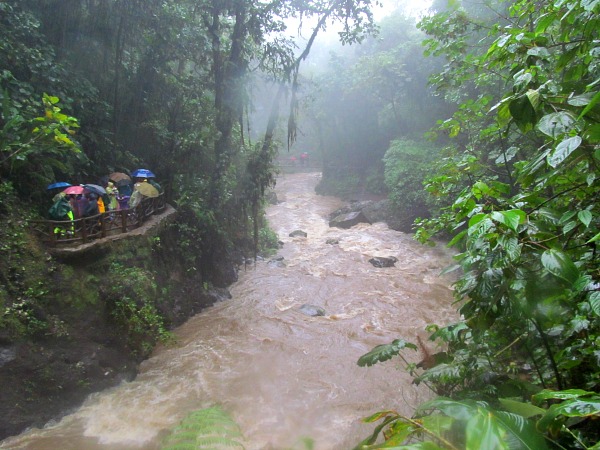 The La Paz River flows through a series of five gorges and each one creates a splendid waterfall. I am not proficient at reading Spanish, but I believe the names of the individual waterfalls were Awesome Falls, Kick Ass Falls, Epic Falls, Gnarly Falls, and Unreal Falls.  Actually, those were not the names, but they should have been as each one was just as incredible as the previous or more so. I was too cold and wet to remember or photograph the names of each falls, but the five together are known as the La Paz Waterfall Gardens.

The park does a great job of allowing perfect vantage points as there are wooden walkways and viewpoints at all angles. There is even one place where you are directly below a waterfall and can virtually reach out and touch its force. 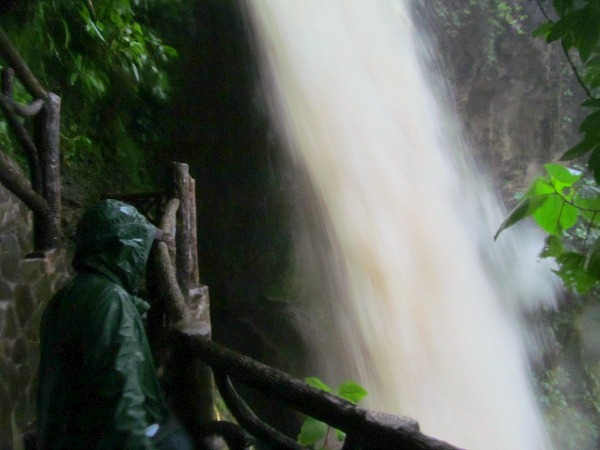 My friend Paul enjoying the force of a La Paz waterfall 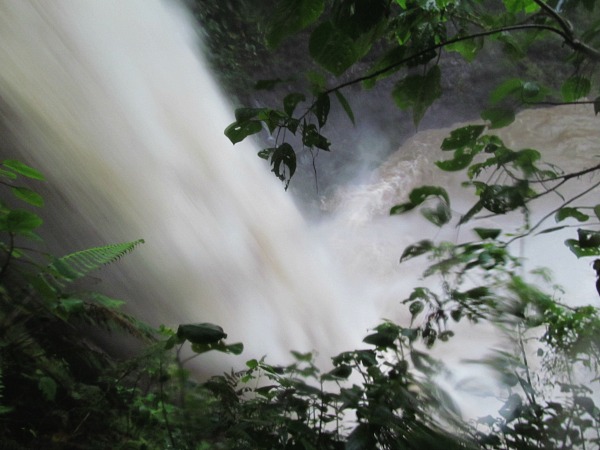 The bottom of Kick Ass Waterfall

Although we were wet and cold, the beauty of this force of nature was not lost in our uncomfortableness. We did not hurry down the trail as this spectacle was worth the high price of admission and worth a little chattering of the teeth. We would soon be back in the van and soon be back at the hostel where we could shower and change, so there was no need to hurry. Plus, this was our last day in Costa Rica, so we were not going to run back to the van and miss out on this natural spectacle. 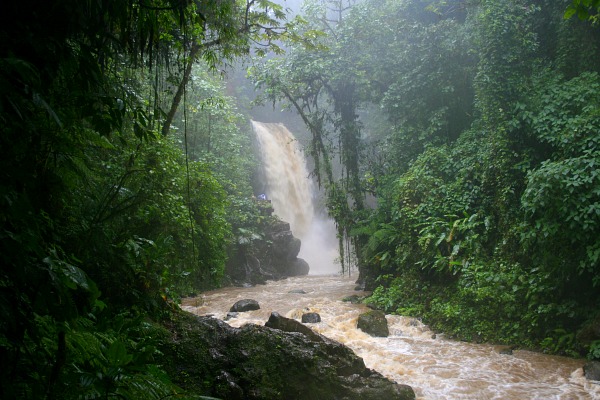 The heavy rain was a blessing in one respect. I have seen pictures of these waterfalls during the dry season, and they are still beautiful, but not nearly as impressive as they were today with muddy water launching with furry over the gorges. There were places where runoff down the steep jungle elevation was creating smaller waterfalls that joined the larger channel in the pools below. It was waterfalls on steroids. Someone needs to investigate this place and not allow it into the adventure travel Hall of Fame. 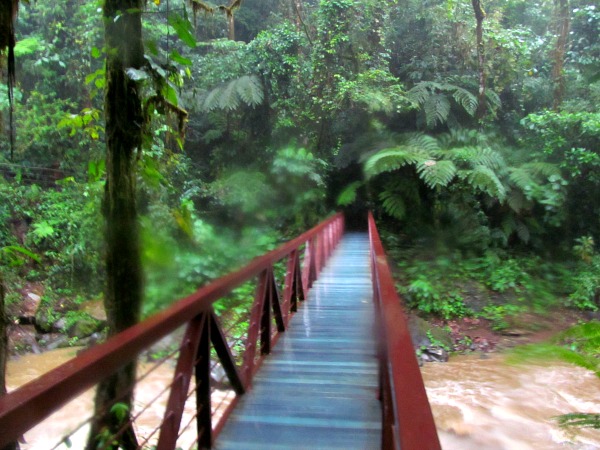 Bridge over the River La Paz

Another impressive aspect of the sight was the deep green color of the jungle surrounding the river. We had seen this same type of color in Monteverde and Santa Elana earlier in our trip, but it was nice to see this lush jungle so close to the country’s capital. 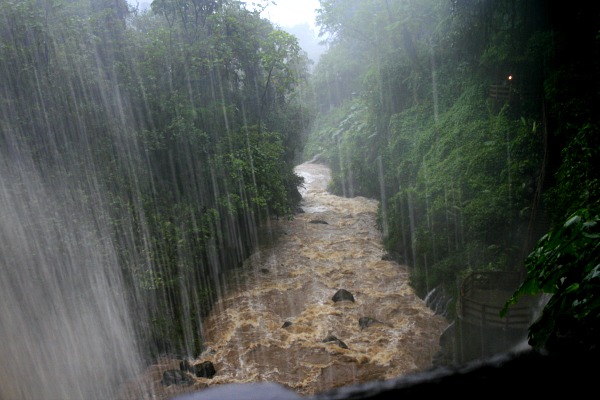 Another stunner from Paul Ceisel at La Paz Waterfall Gardens

I give kudos to my friend Paul. He never complained about the cold and rain and was just as entranced with the natural beauty we were witnessing as I. My camera got wet and had some issues taking pictures. In fact, I think this trip was its death knell. Fortunately Paul’s camera was working better, so I stole a few of his best shots. 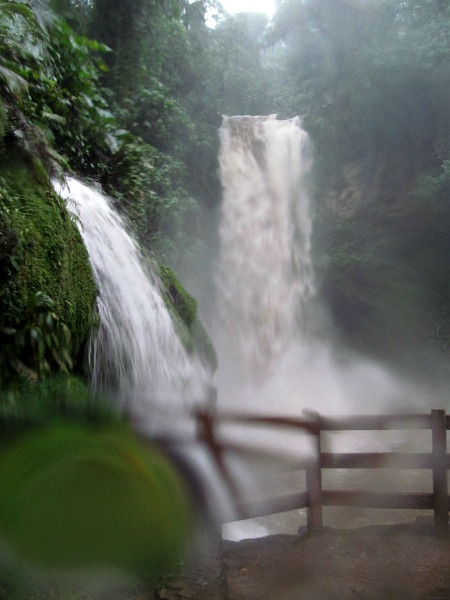 We soon made our way to the bottom of the canyon and a bus drove us back to the entrance where a warm van and our guide were waiting. I can close my eyes and still hear the roar of the waterfalls with the sound of drenching rain constantly slapping the rainforest flora. It was treat to see these waterfalls and walk in this jungle even on a cold day in the rainy season. 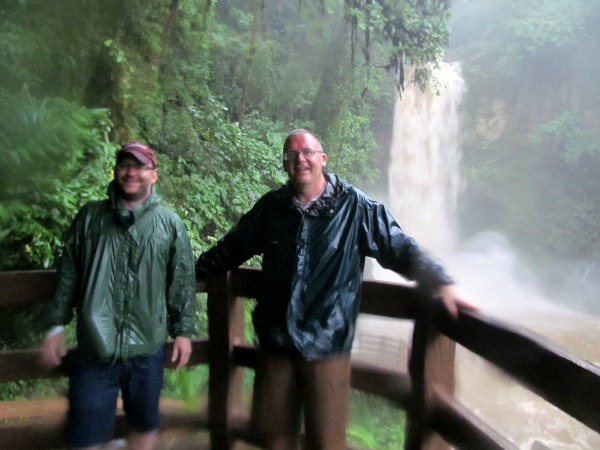 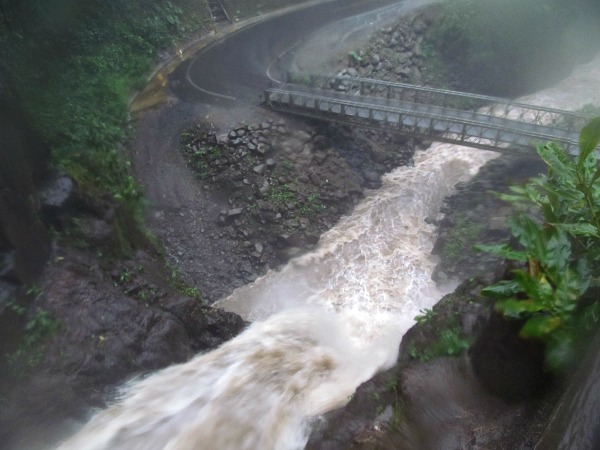