My first visit to Costa Rica did not include the Monteverde Cloud Forest, so it was first up on my radar after landing at Juan Santamaria Airport in Alajuela. After a night at the Alajuela Backpackers, we jumped a bus to Monteverde at 7 a.m. – no small feat after an extended happy hour at the rooftop bar in our hostel. We were told the bus was 6 blocks away, but when we got there we were told it was another 6 blocks. We ended up jumping a cab and paying $5.00 for a 5 minute ride. The three hour bus trip only cost $3.00 a person. So it goes when you don’t know exactly where you are going. 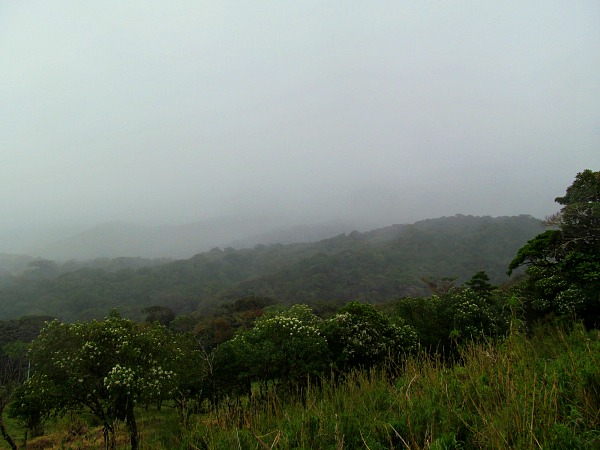 A few of the Monteverde Cloud Forest while approaching by road

Costa Rica has a fantastic bus system. It is very affordable and safe. I would keep an eye on your bag at all times, but you should do that anywhere. The seats were comfy and roomy enough for our trip to Monteverde. We arrived in the bus station, hailed another $5.00 bus to our hotel – the La Colina Lodge. The lodge was only 1 kilometer from the entrance to the Monteverde Cloud Forest. We checked in and got situated. My friend opted for a zipline tour while I decided I needed to explore the rainforest ASAP. 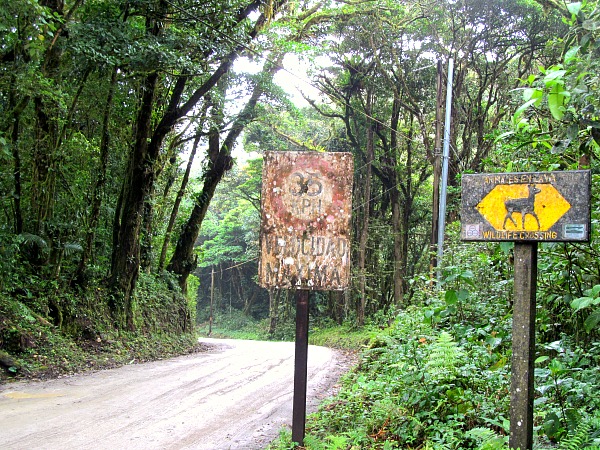 Walking the road from LaColina Lodge to the Monteverde Cloud Forest

No need for a $5.00 cab from here. I took off on foot and within a half hour I was at the gates greeted by a coati. The entrance fee is $18.00 and the reserve closes at 5 p.m. so get there early. I read in one guidebook that they cap the number of people in the reserve, so if you are here during the high season from Christmas through April, you really want to get started early. I was here in the ending of the rainy season and before the busy or high season, so there was no problem entering the reserve. 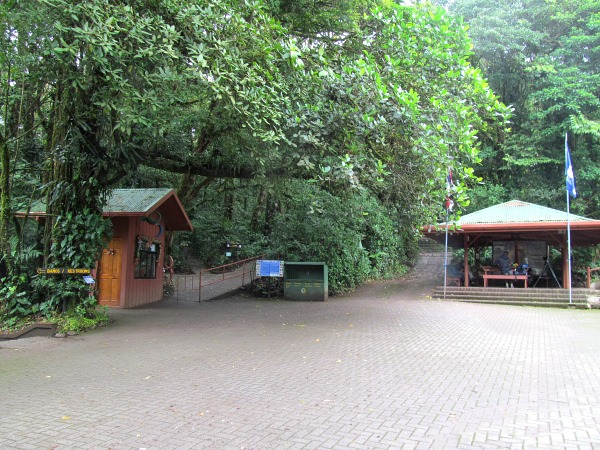 The entrance to the Monteverde Cloud Forest Reserve

There are probably about 6-8 miles of trails that circle the reserve. They are incredibly well maintained and well marked, so a guide is unnecessary from a fear of getting lost standpoint. It always helps to have one though as they are trained at spotting animals and birds. 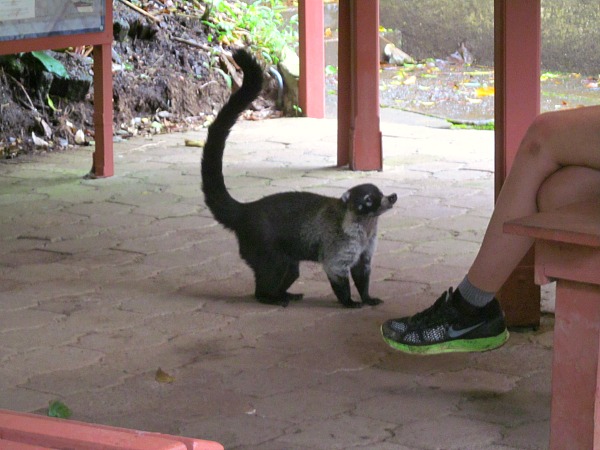 Greeted by a coati at the gates of the park

On the first trail there is a waterfall less than a half mile away from the entrance. I saw a lot of people on this part of the trail, but after that I felt like I had the reserve to myself. There were times I went hours without seeing people on the loop trails on the far end of the park. 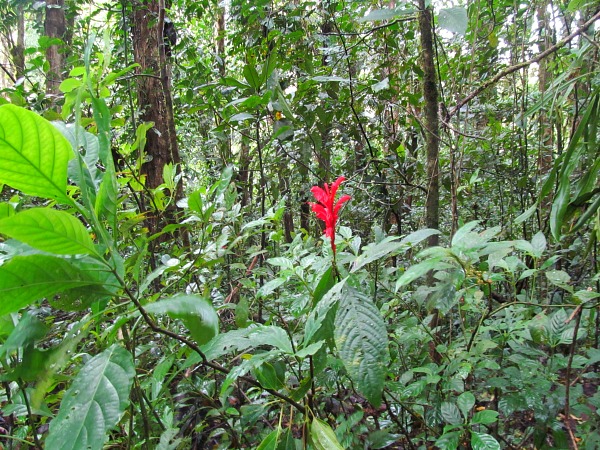 I have been to rainforests and jungles in Thailand, Borneo, and Guyana, but I have never seen such amazing vegetation and such vibrant green as I did in Monteverde and Santa Elena. This was my first time in a rainforest during the rainy season, and I was completely in awe. The rainy season technically ends in Costa Rica in November, but Monteverde is at a higher elevation and a misty rain is still common in December, so the forest is still in full steroid green mode. December is also the windy season, so the mist was blowing horizontally at times. 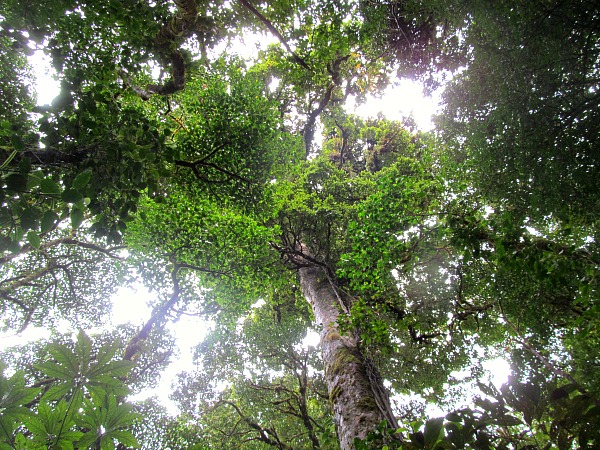 The trees in Monteverde were absolutely amazing

Besides the amazing vegetation, I saw two coatis, a black guan, an agouti, and a few hummingbirds. Monteverde has a full array of mammals and exotic birds, but you really need to get up early and perhaps get a guide to have the best opportunity to see macaws, toucans, and the prized resplendent quetzal. Even though I did not see a lot of birds and mammals, I was not disappointed. As you can see from the photos, the main attraction in Monteverde is the flora. 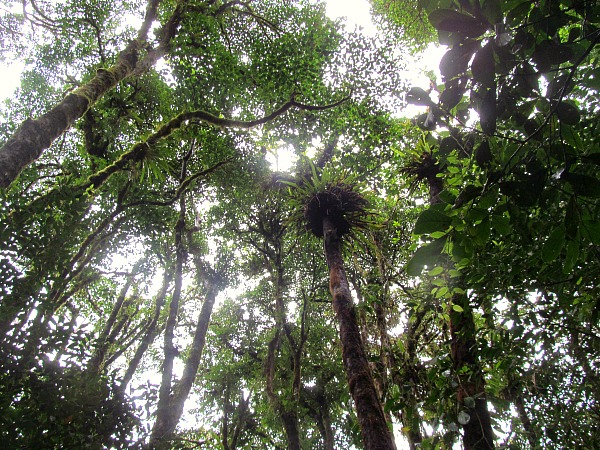 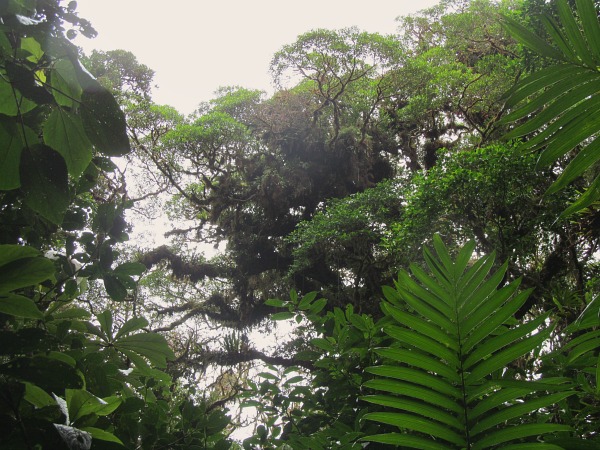 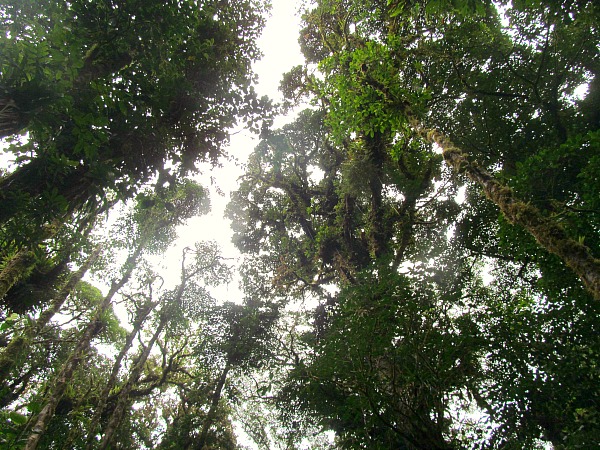 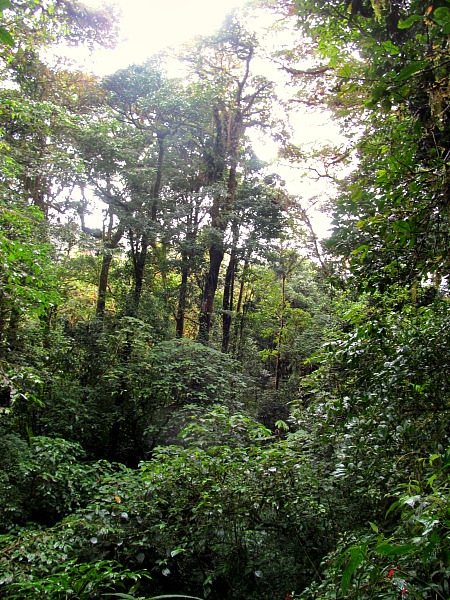 Definitely the greenest place I have ever visited 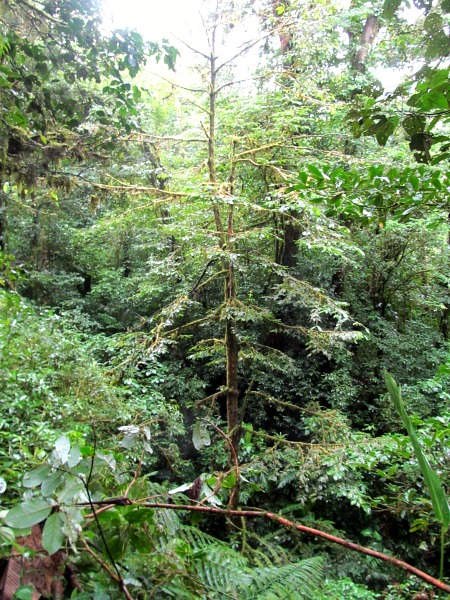 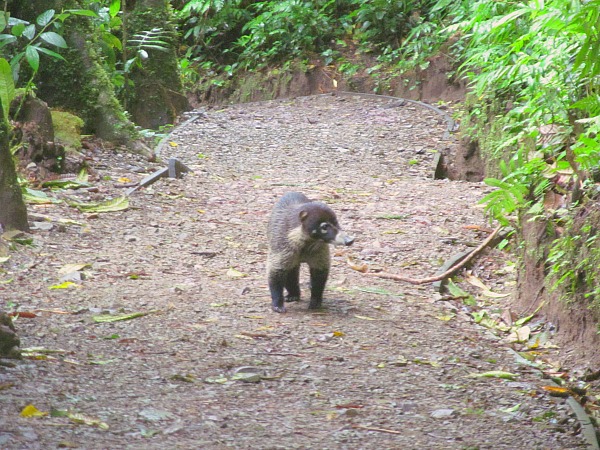 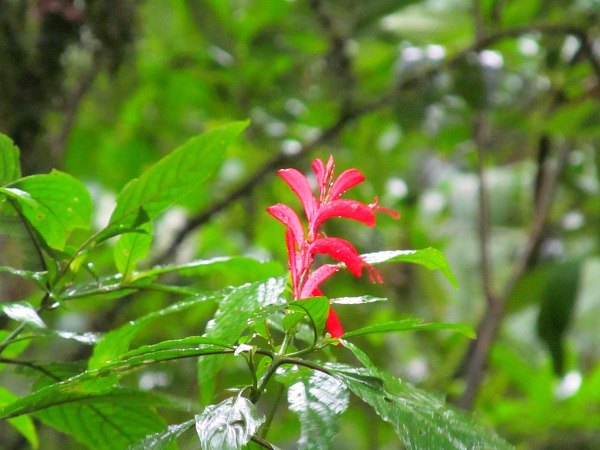 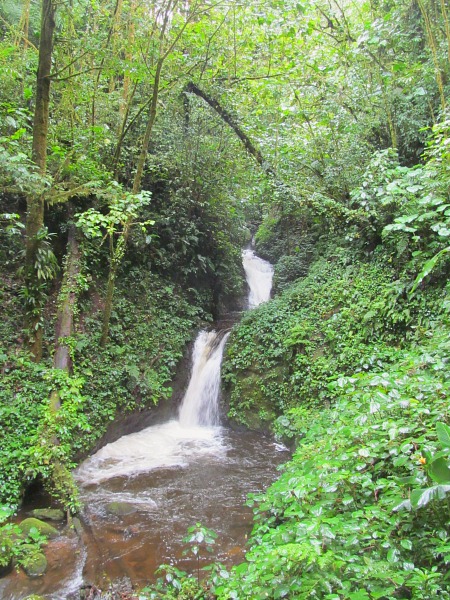 Beautiful cascading waterfall through a sea of green 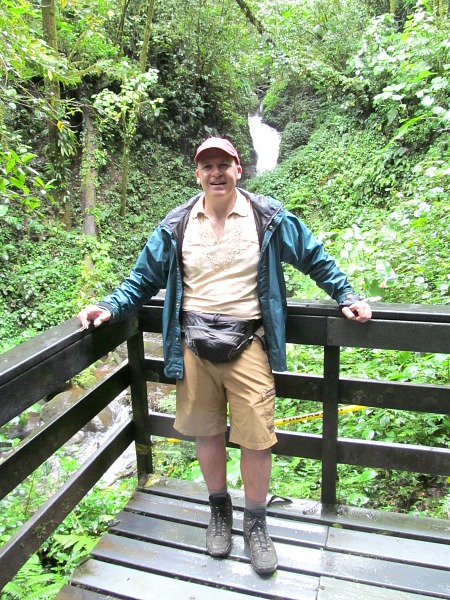 Enjoying the beautiful scenery at the Monteverde Cloud Forest 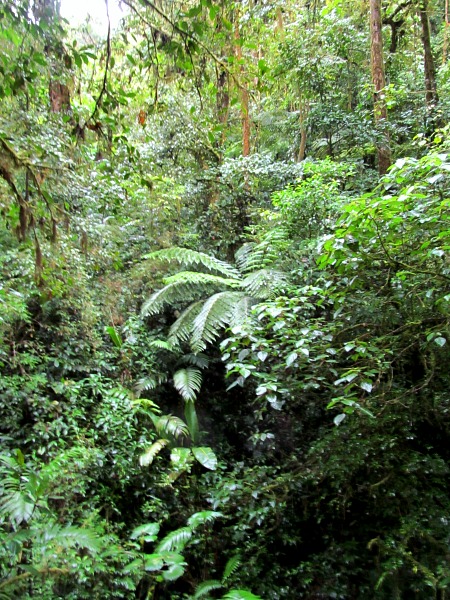 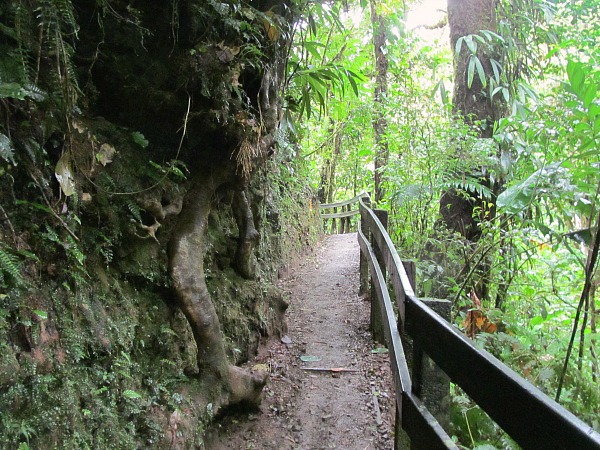 The trail leading out from the waterfall 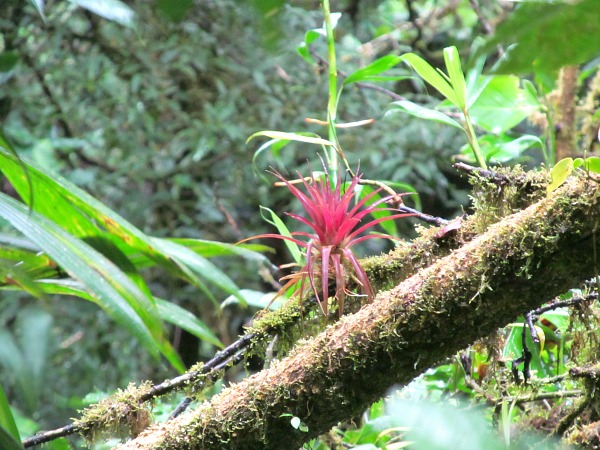 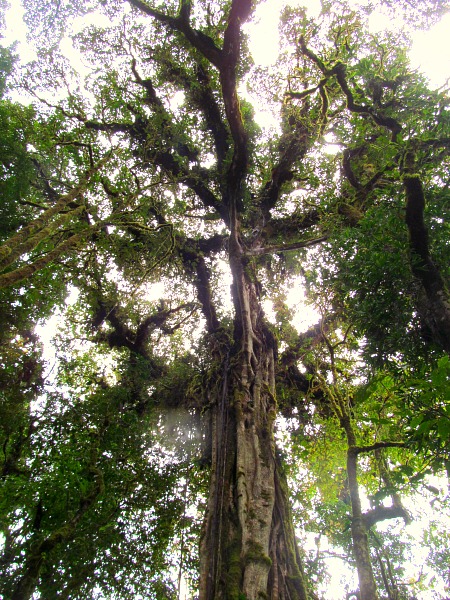 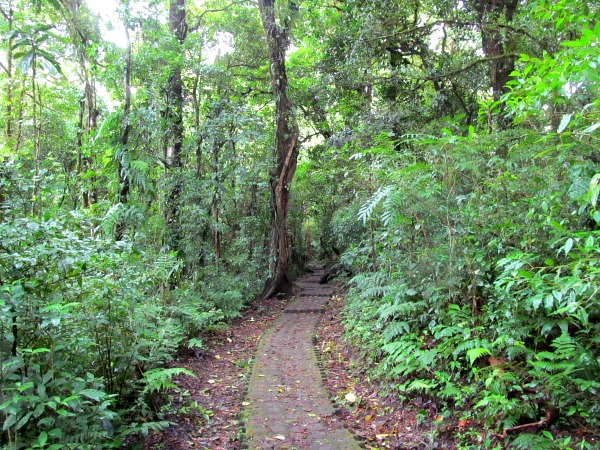 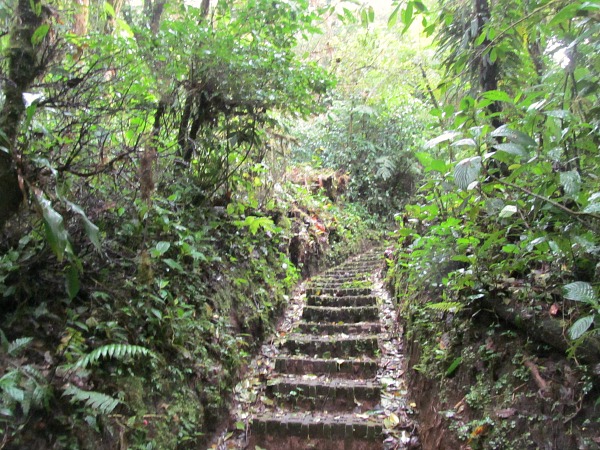 There is some elevation in Monteverde, but it is not too bad 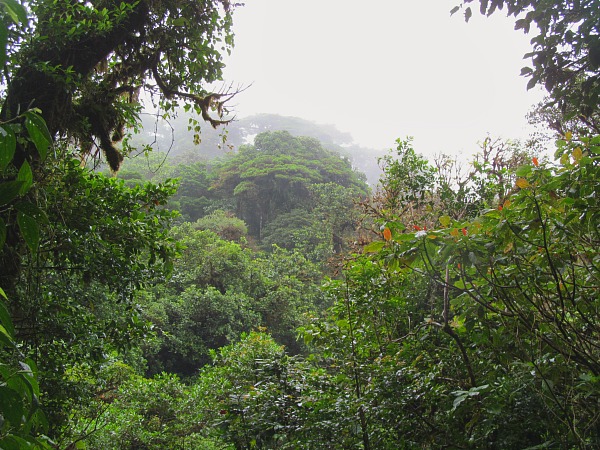 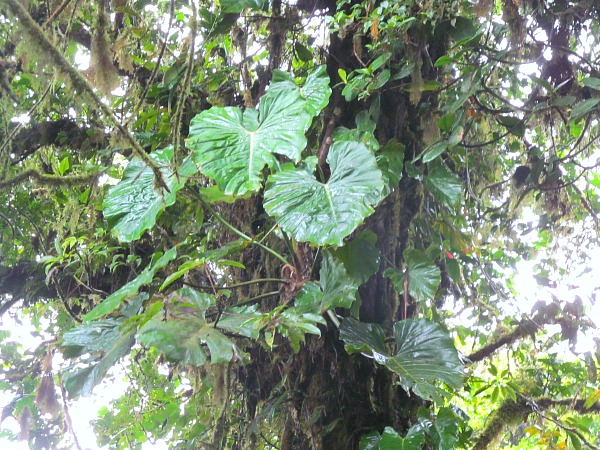 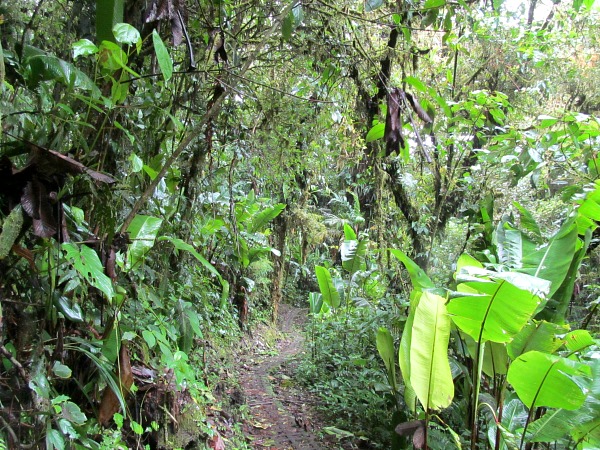 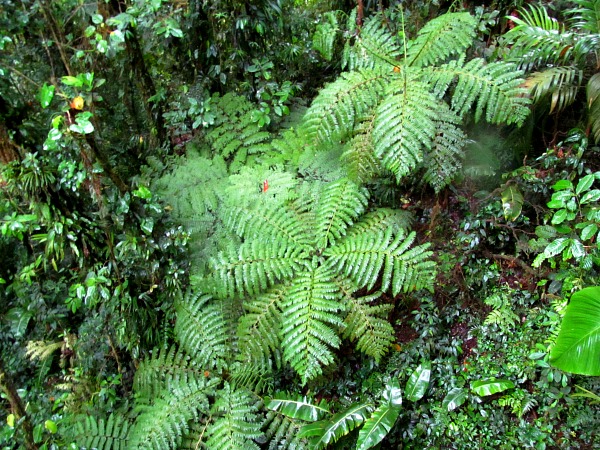 From the canopy walkway 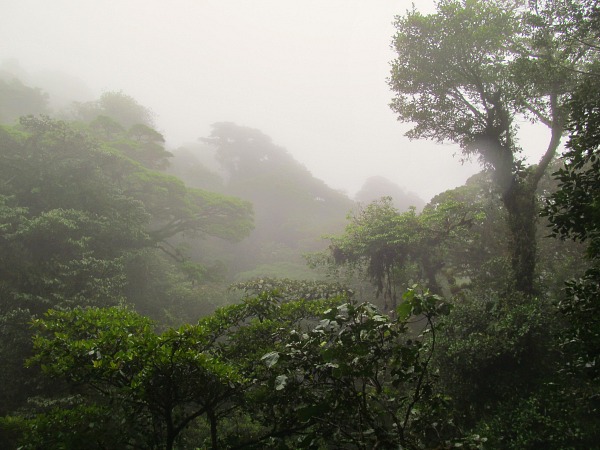 Even if there was a view, the overlook only showed mist, fog, and a few trees 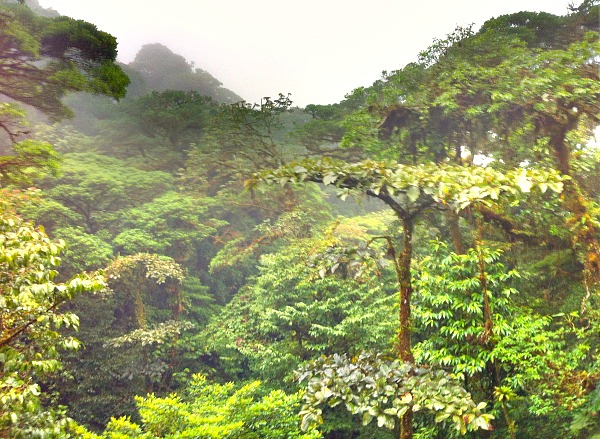