Auberge Old Chelsea B&B is the gateway to Gatineau Park

Whenever you go on a significant outdoor adventure, it is nice to have a temporary home just outside the destination. You can stay here before entering, after departing, or just use as a base while enjoying a multiple day trip. When I visited the Outaouais Region of Quebec for the Canada Ski Marathon, my first stop was the Auberge Old Chelsea Bed & Breakfast. 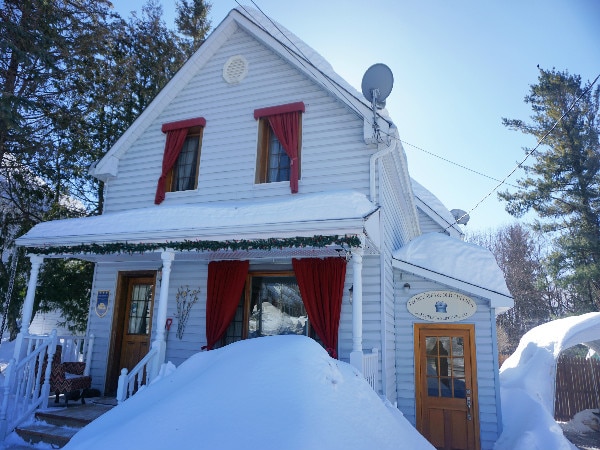 Drastic change of climate in Outaouais

I drove from Chicago to Kingston, Ontario and hardly more than a dusting of snow could be found. I then turned north and in less than two hours, I was in a winter wonderland. Amazing what a drastic change took place in a mere hundred miles. I pulled into the Auberge Old Chelsea B&B after almost passing it. There was so much snow, it was hard to decipher one building from the next. The village of Old Chelsea just looked like a beautiful white blanket of snow. 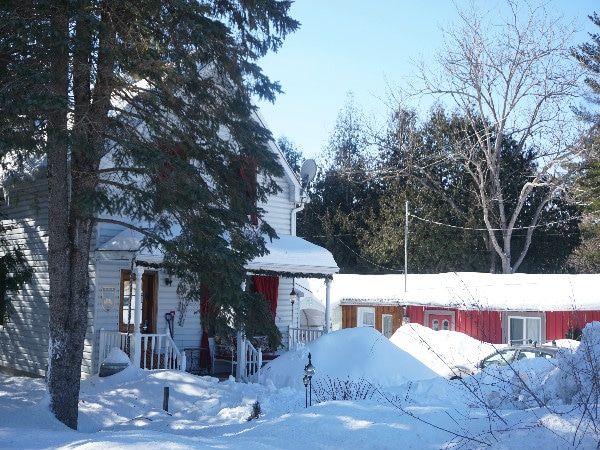 Out in front of the Auberge Old Chelsea B&B

I parked in front of the establishment, which was an impressive large white house. It looked like a regular and comfortable home. I walked up the stairs to find my room behind beautiful blue French doors. The room felt immediately warm and inviting. 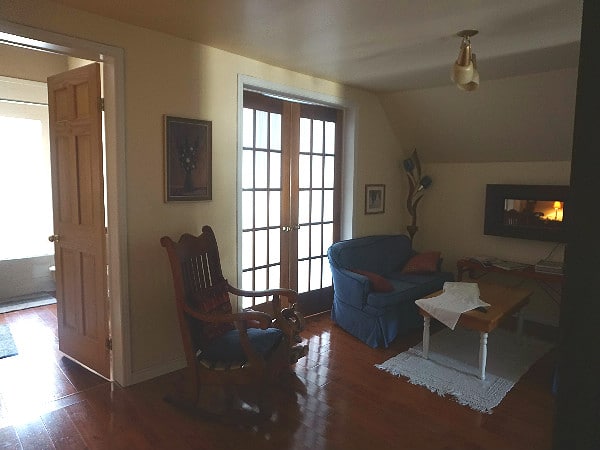 Before my head even hit the pillow, I was fast asleep. It was 2 a.m., and I was absolutely exhausted. Initially, I planned to cut my long drive in half, but I awoke the day before with a stomach flu. Fortunately, it was the 24 hour variety, and I did not have to cancel my trip. I did need to change my departure day, so I made the thirteen hour drive in one day instead of two. For obvious reasons, I was super tired. I appreciated the relaxing sleep that much more. 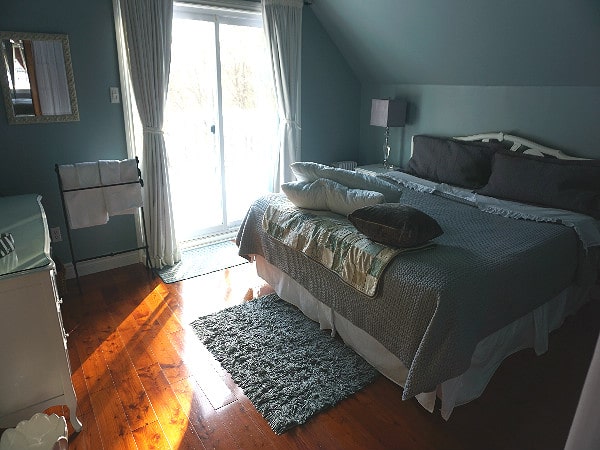 I awoke and met the proprietor of the establishment, Manon. The Wi-Fi was out, so I texted her to let her know. She replied back immediately that the electricity in the village was out. Every time I had an issue or question, Manon immediately replied to my inquiry. 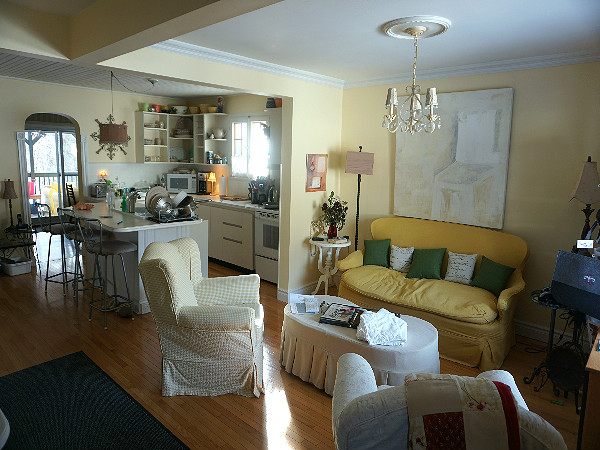 I was set to embark on a crazy adventure the next day with the Canada Ski Marathon. In preparation, I wanted to ski for an hour or two in Gatineau Park. The Canada Ski Marathon is 100 miles in two days, so no training could help me now, but I figured a couple of hours on skis would help shake the cobwebs out after the epic drive the day before. The Outaouais Tourist Bureau was kind enough to provide a complimentary pass to the park. 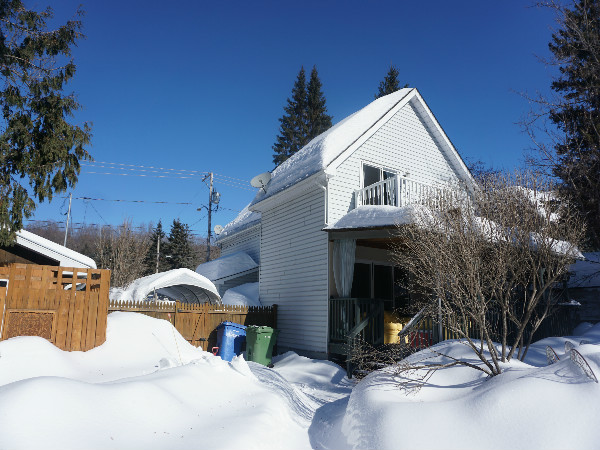 From the backyard of the Old Chelsea B&B

I enjoyed a simple breakfast of bread and fresh homemade jam with coffee and some fruit. Then I left for the park and provided my pass and got some information on where to park and where to enter.

I chose to enter at parking lot 9. I participated in the Gatineau Loppet two years ago, so the beginning section looked familiar. The first part of the trail was the unplowed road of the park. I skied up a long hill until I came to a trail junction that went through the woods. The trails in the woods in Gatineau Park are so much nicer than the roads. I hit some pretty nice hills and some gorgeous scenery as the trail snaked its way through the Outaouais wilderness. 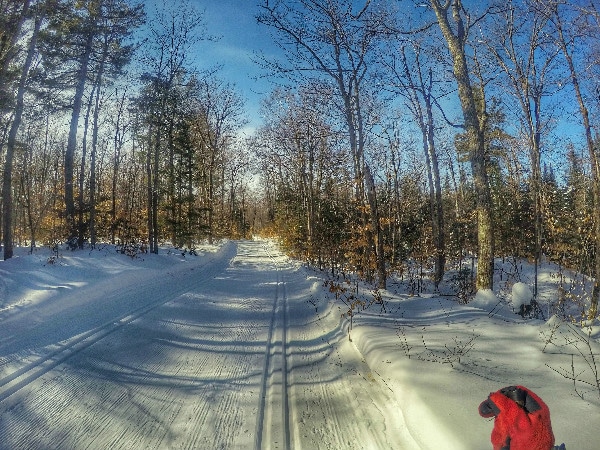 This is so accessible from the Auberge Old Chelsea B&B

I came across a warming hut where I turned around. The cross-country ski set up in Gatineau is quite impressive. They have over 200 kilometers of trails that are expertly groomed. Despite the amount of snow, the course was rather fast and a little crusty on this day. It must not have snowed for a while. This would change over the weekend as the region was hit with another foot of snow. 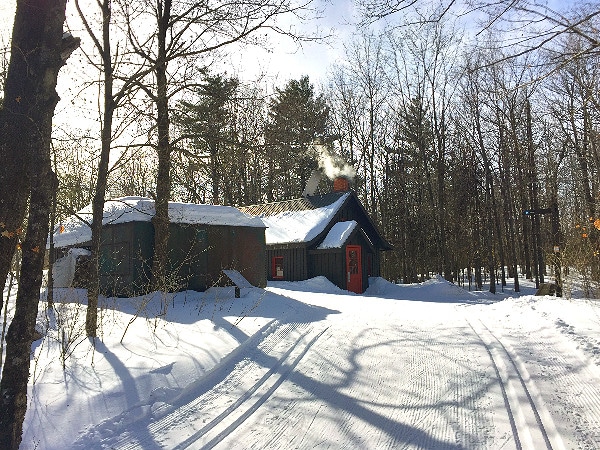 After my little ski adventure, I returned to the village and packed up my belongings. I then had a poutine adventure at the pub on the corner. After wolfing down my food, it was time to head to Pompineau for the night before the Canada Ski Marathon. 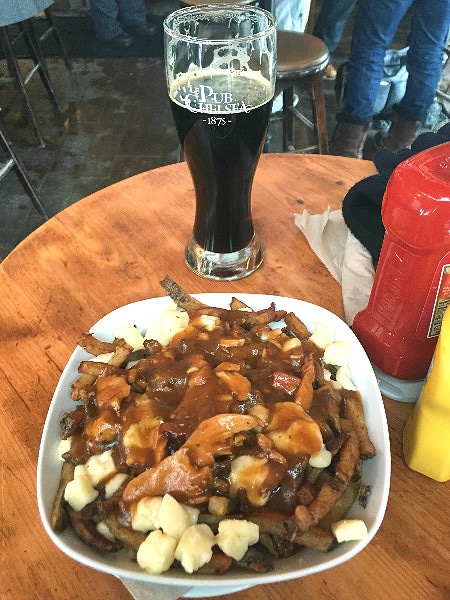 Old Chelsea is a cute little village with small shops, Gatineau Park, and the wonderful Nature Spa. I visited this spa the day after my Gatineau Loppet race two years ago. It was an awesome and relaxing experience. The Auberge Old Chelsea B&B is a great base for all these activities. The area is also a great adventure destination in the summer with hiking, canoeing, kayaking, and fishing among many other outdoor options. I would love to check out the region sometime in the summer. Check out the B&B’s website here for reservations and more information. 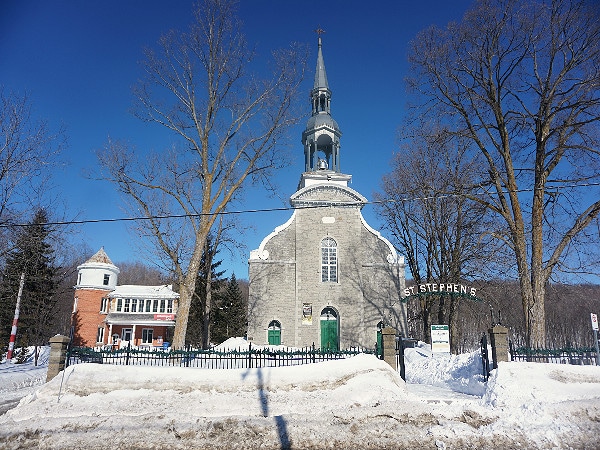 Beautiful Church just down the street from the B&B

When I got to Pompineau, to my horror, I discovered I had left my GoPro camera at the Bed & Breakfast. I texted Manon, who looked around and found my camera on the floor where I took of my boots after my ski trip. It was fortunate that I found out I left it behind when I had time to deal with it. It would have been awful if I realized this the morning of the race. I drove back to Old Chelsea and recouped my GoPro, so I was able to use it the next day during the marathon. Thanks again Manon for the quick response. 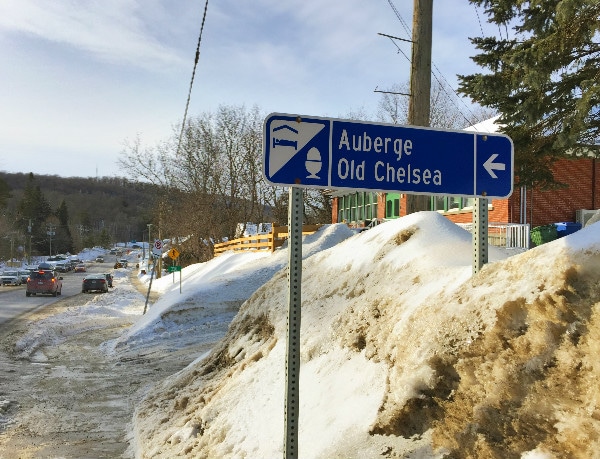 Disclosure – My stay at Auberge Old Chelsea B&B was complimentary thanks to the Outaouais Tourism Bureau. This fact does not impact this post as my opinions, pictures, and videos are purely my own.