The classic book Catch-22 introduced the term to the English language. The dictionary definition states: “A dilemma or difficult circumstance from which there is no escape because of mutually conflicting or dependent conditions.” I had a Canada Ski Marathon adventure Catch-22 when I raced in this year’s competition. 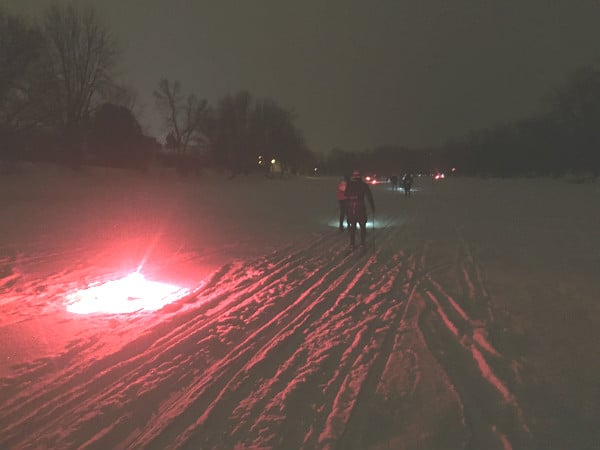 What is the original Catch-22

Many people are familiar with the term Catch-22 and know that it originates from the book, but many do not know what the actual original catch was unless they recently read the classic book. The book Catch-22 was written by Joseph Heller and chronicles the experiences of Yossarian during World War II.  Yossarian is a U.S. Army Air Force bombardier stationed in the Mediterranean. 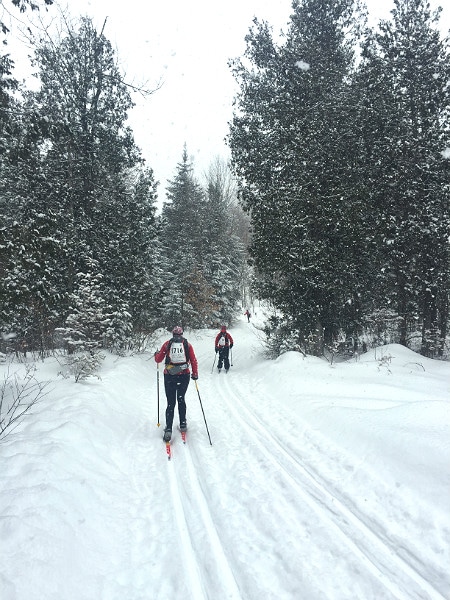 When I first heard about the Canada Ski Marathon from fellow blogger Leigh on her Hike Bike Travel blog, I said this is crazy, but I want to do it. In reality, my Catch-22 is a little different. Yossarian realized the insanity and wanted out, but I fully understood it and wanted in. At least at the beginning I did. 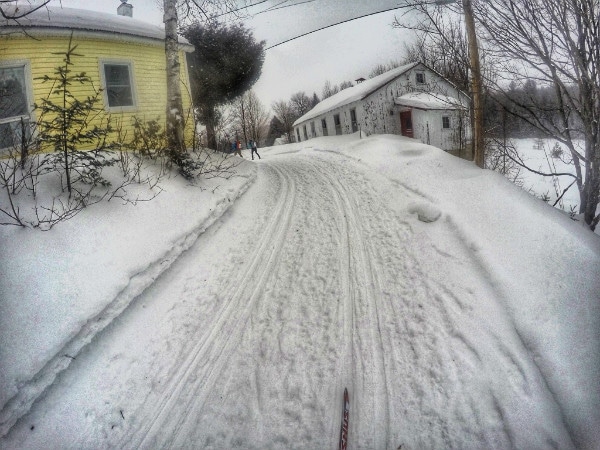 The Canada Ski Marathon traverses through hundreds of landowner’s property. Without their gracious acceptance of skiers crossing their property, the marathon could not take place.

What is the Canada Ski Marathon

The Canada Ski Marathon takes place each February in the Outaouais region of Quebec. The race is 100 miles long or 180 kilometers over two days. It is not necessary to ski the whole race, but if you want to be a Coureur des bois you need to complete the whole race. There are other shorter level options for those who do not want to embrace full craziness. The race is not timed; however, you need to be through the last checkpoint of the day at 3:15 p.m. in order to be allowed to finish the last section. This is no easy feat. 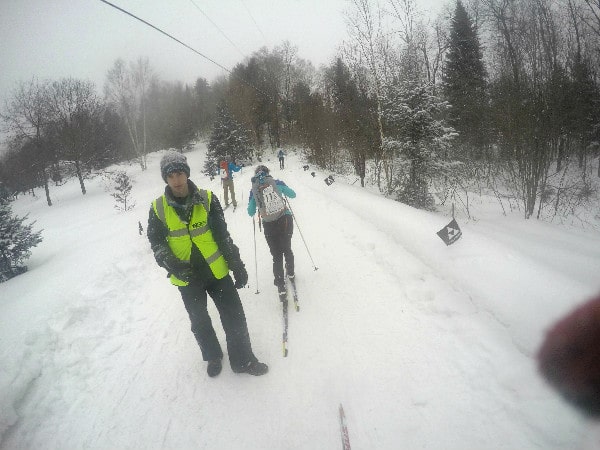 Going through a checkpoint during a Canada Ski Marathon adventure

If you are able to complete the race, you become a Coureur des bois bronze.  After that, you can continue to race in future races to become a Coureur des bois gold and be allowed to camp in the Gold Camp. These are the elite conditioned skiers who can ski 100 miles in two days with a backpack on and stay overnight in the freezing Canadian wilderness. I actually wanted to try it with the backpack on the first time, but you have to finish without a backpack before moving on to the more extreme level. Glad that I was saved by the rules of the competition from my own sense of adventure or madness. 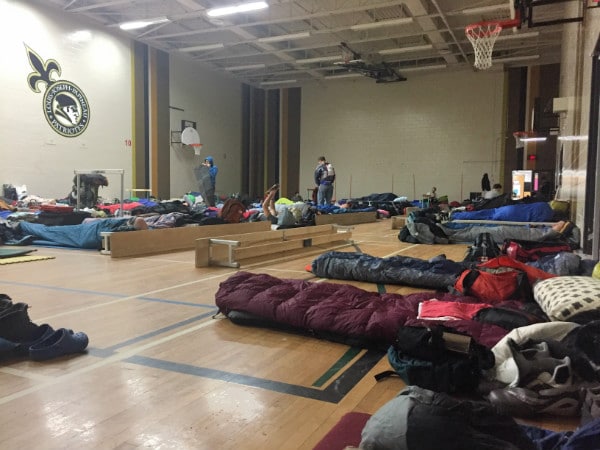 Start of the race

I stayed at the Pompineau school and slept on the gym floor the night before the race. I woke up at the crazy hour of 3:30 a.m., had breakfast, and jumped a bus to the village of Lachute for the start. The race started in pitch darkness with a driving snow. I said this is insane, but I loved it. The race began, and we immediately hit the Riviere du Nord. The first couple of kilometers were on this frozen river. There were flares in the middle of the river that helped light the way. 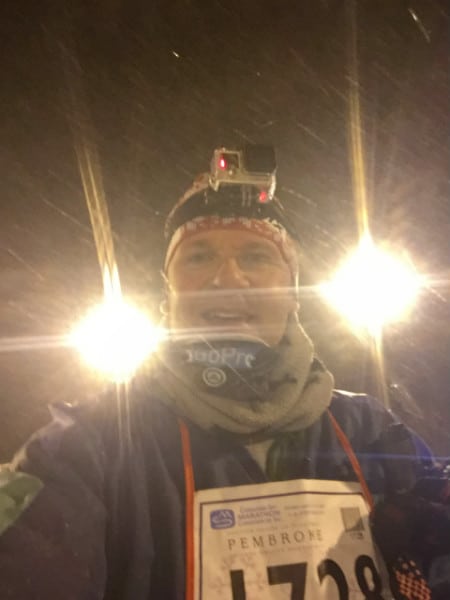 We then left the river and entered the woods. I did not bring a headlamp, but the light from other skiers helped reveal the the trail. I had no problem seeing the trail. It is always easier to see the woods at dark in the winter thanks to the light reflecting off the snow. Plus, it was beginning to gradually lighten up  as dawn approached.

No problems through checkpoint one and two

The course through the first two sections was beautiful, but nothing too crazy terrain wise. There were a few good hills, especially on the second section. The snow was really hard and crusty below a blanket of fresh snow that had recently fallen. This made some of the downhills kind of slick and fast. I crashed a couple of times because I came close to running over other skiers and could not slow down in time. I had to bail or risk collision. This was the first time I have ever crashed in a skiing race. It would not be the last. 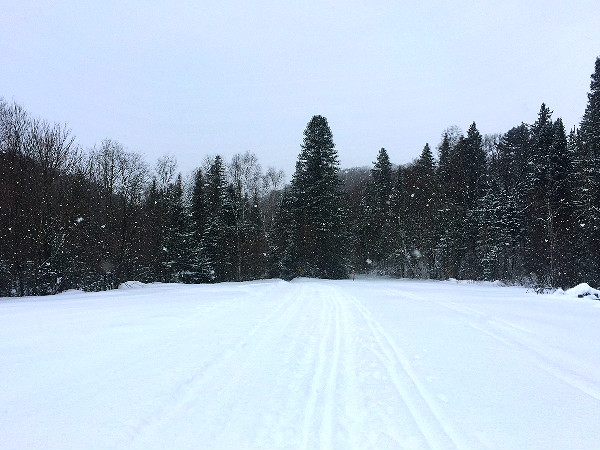 Before arriving, I did not do any research on the course. I have skied a lot of cross-country ski trails in the Midwest, and I completed the Gatineau Loppet in the same region of Quebec two years before. I figured I could handle any hills the course would throw at me; however, I did hear rumor from other skiers that section 3 was the most difficult.

At first, Section three was similar in nature to Section two. I did crash again coming around a corner, but for the most part the terrain was manageable. This all changed at kilometer 40. At this point the trail went up, up, up, up, and up. The course climbed for two straight kilometers. I got to the top and proclaimed this insane; however, I made it to the top. 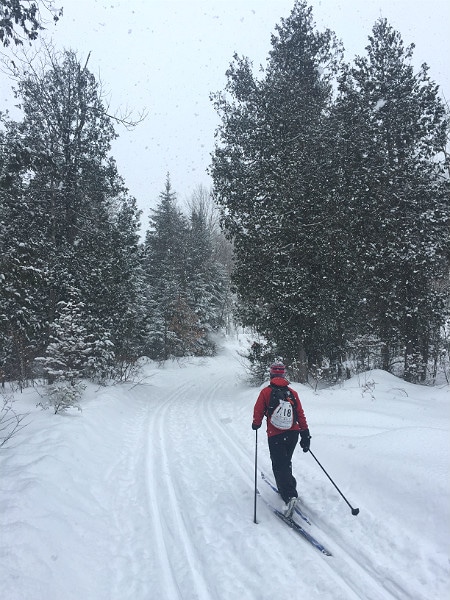 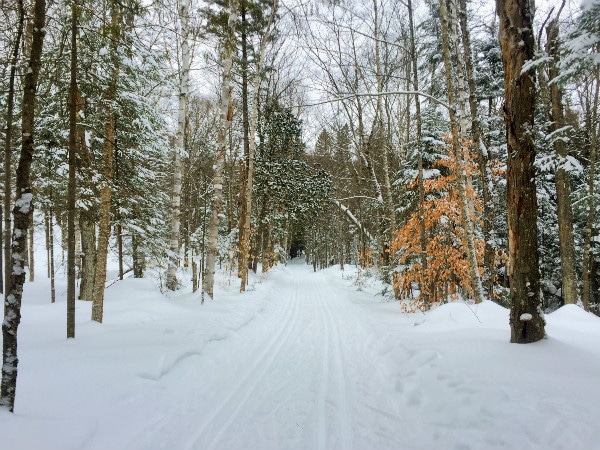 Another shot from my Canada Ski Marathon adventure

Since I had already crashed, I had a bit of a fear in my mind that perhaps the back end stretch of these hills might not be that easy. This premonition turned out correct. I turned a corner and the bottom dropped out of the trail. It was almost straight down with curves. Worse yet, there were these huge craters right in the middle of the trail. The trail was basically none skiable. I made an attempt and snow plowed as hard as I could, but with the holes in the trail, I had no hope of staying on two feet. I crashed, got up, tried to ski further, and crashed again.

When I got to the bottom of this hill, I turned a corner to find another precipitous crater filled hill. What happened was many people decided the hills were not passable, so they took off their skis and walked right down the middle of the trail. This made a difficult hill impassable. There were a series of six to seven hills until the trail finally came off this high ridge. At one point it was so bad there was a sign telling skiers to take off their skis. At first, I attempted to navigate these treacherous hills and just crashed before I got going to fast, but finally threw in the flag and took off my skis. 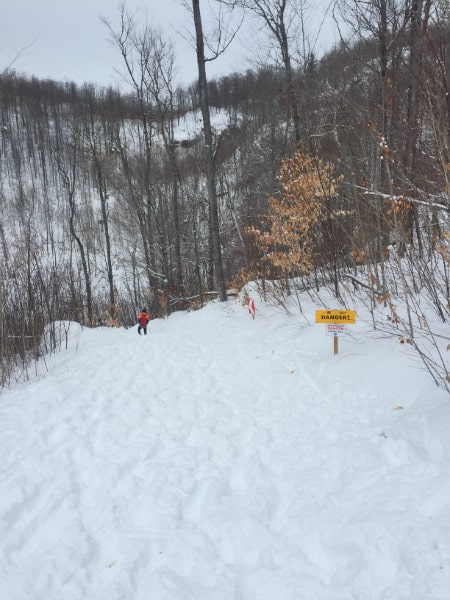 Walking down a hill in deep snow is way more difficult, time consuming, and much more of a drain on your energy level than actually skiing down a hill. I was already exhausted from climbing up the hill, and now I was deprived of my rest going down the hill. This was crazy I declared. 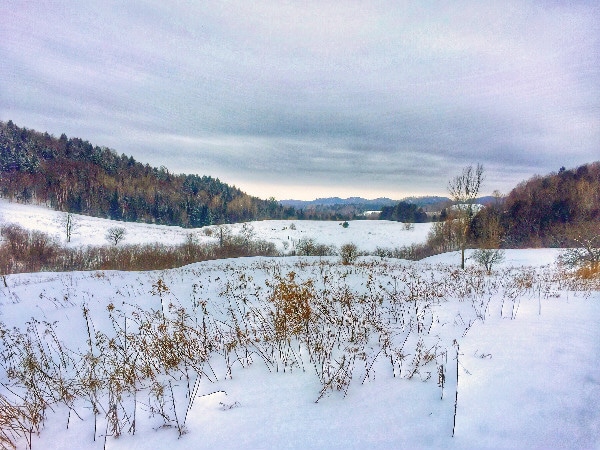 End of the hill

At the end of the series hills, there were two other skiers putting on their skis. I asked incredulously if they had done this race before. One replied he had not, but the other, without even asking for more clarification to my question, replied that the course was not usually this hard. He said he had in years past skied all the way down this hill without having to take off his skis or crashing. I can only assume the slick condition of the snow under the fresh snow caused the hills to be too fast. Then the skiers either crashing on the hills or walking down them created divets so severe that skiers following them could not successfully navigate. 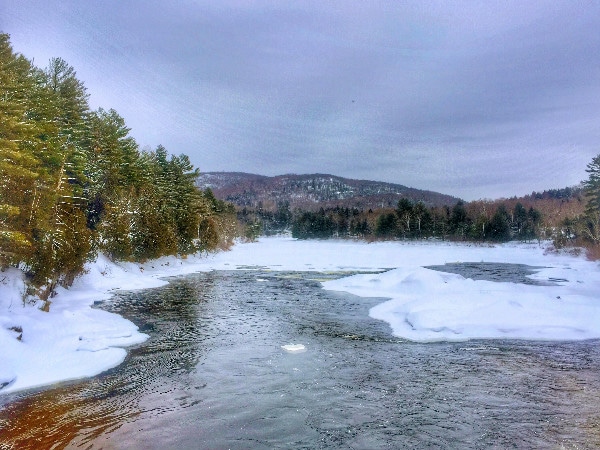 It took me two hours to ski section one, and a little more than two to do section two, but section three took over four hours. I got to kilometer mark 48 at the end of section three at 1:40. This meant I had less than two hours to complete section four if I wanted to continue on with the last section. I knew this was both insane and impossible. With no hope of completing my Coureur des bois hopes I got into the shuttle bus and ended my day. I had skied 48 kilometers or almost 30 miles through some of the toughest terrain I have ever attempted, so I decided that I had enough skiing for the day.

I got on the bus and talked to a lady next to me. She basically had the same experience. In fact, everyone on this bus made the same decision I had. There were several Coureur des bois gold skiers on the bus. There was no sense of shame from anyone who did not finish. 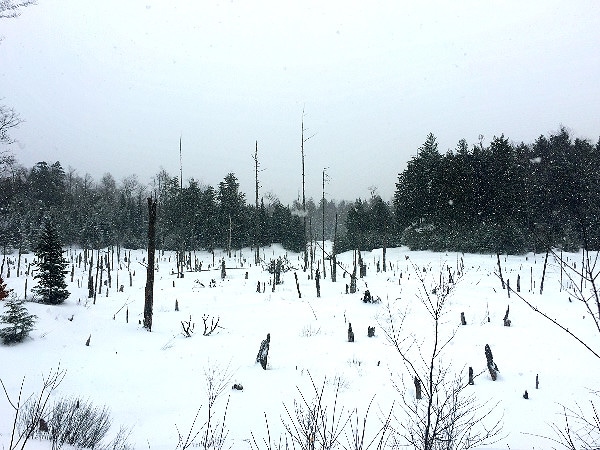 Reflection on my experience

At first, I was a little upset that I was not able to finish; however, I did not stop my race that day because I did not enjoy the race or the experience. I skied for 30 miles through some beautiful Canadian wilderness on a day it was snowing. While the hills were challenging, and I crashed perhaps ten times because I stubbornly refused to take off my skis on the unskiable sections, I never stopped enjoying the experience. My inner voice kept saying, this is insane, but another voice, perhaps not as loud kept saying “this is great.”

Even the steep hills where I kept crashing I found kind of fun. I was a little upset with them though because I knew the time I was losing here was hurting my effort to complete the Coureurs des bois. While completing the Coureur des bois would have been a great achievement, the race is more about the experience than individual accomplishment.

Even ripped my pants

When I reached down to put on my skis at the end of the long downhill run, my pants in front ripped. I am sure the fabric was compromised from the cold and crashing several times. When I got to the third checkpoint, someone asked if I was attacked by a bear. When you rip your pants trying to achieve something, that sure indicates you gave it your all. 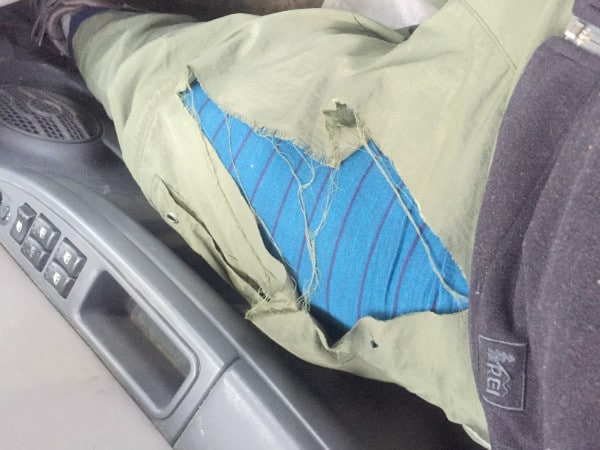 Would I do the Canada Ski Marathon again next year. Heck yea I would. You might say  I am insane to return, but the race and experience was so amazing, I would be crazy not to return. Similarly, if you are thinking of competing in this race in the future, then you are insane to even think about it, but you would be crazy not to do it. This is why the Canada Ski Marathon is the Catch-22 of adventure sports.

Part of my stay in Outaouais including lodging and race entry was complimentary; however, this does not impact the presentation of this post. This adventure, opinions, photos, ripped pants, and videos are my own.