Leave it to the Beaver Brook cross country ski trails

One difference I have noted in my adventures pre and post blog is a willingness to try and see new places. This is especially true of cross-country skiing. If it were not for the blog, I would continuously ski at Kettle Moraine, the Birkie Trail, and Black River Forest. Since I am a travel blogger though, I cannot write about the same places over and over again, so I need to check out places like the Beaver Brook cross country ski trails. 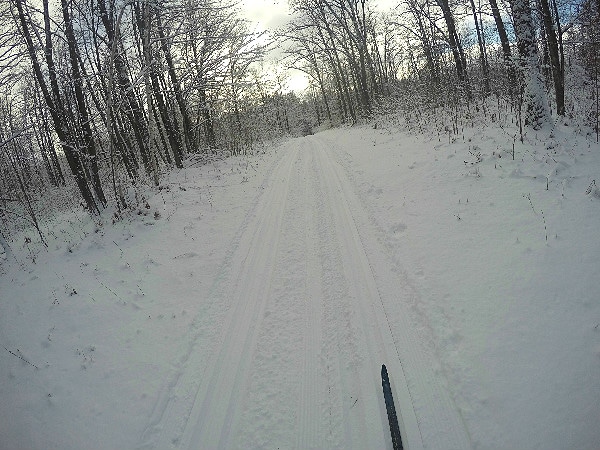 Many of these new places have been destinations I have driven by hundreds of times, but never stopped. Rock Cut State Park and Mirror Lake State Park are two other places I have driven by so many times on my way up north, but I never stopped until I started blogging. These two parks are now two of my favorites both for winter and summer adventure. 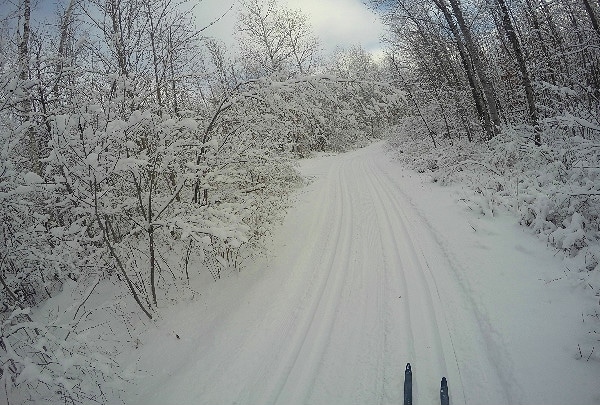 The Beaver Brook cross country ski trails are another place I have driven by many times. They are only one mile from Highway 53, which is the main thoroughfare to many of my favorite destinations like the Birkie, the St. Croix and Namekogan Rivers, and the Boundary Waters and Quetico. In fact, one stretch of the trails goes right by the highway.

The first day I was up north, I skied the Timberland trail system, and the second day I skied the Birkie Trail. Wisconsin had just been hit with some wet heavy snow and the groomers had not yet been able to clear the debris and get the first two trails up to speed. The Birkie was in especially bad condition as it felt like I was skiing through the backcountry.

Skinny Ski indicated that the Beaver Brook cross country ski trails were in good condition. Leave it to the Beaver Brook Trails to be in great shape. It was good to see that ole man winter was not too hard on the Beaver. On the third day I headed here and was pleasantly surprised that they were already groomed and for the most part tracked. Beaver Brook has skiing for classic only, which is perfect for me since it is the only style I have ever tried. 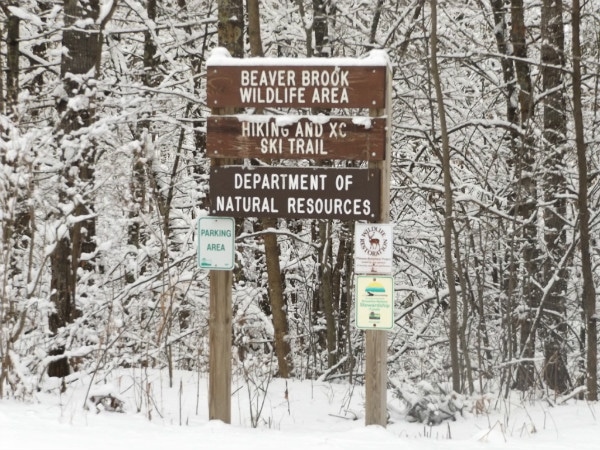 The trailhead on Cranberry Drive

I enjoyed these trails so much that I came back the next day on my way home and skied the West Trail. The first trail is I guess just called the Beaver Brook Ski Trail. There are two trail loops that are basically right next to each other. On both days skiing, I did not see a single other skier on the trail. This is another good reason to branch out to lesser known trails.

On the first day I skied these trails, I came around a corner and at the bottom of the hill were about twenty resting turkeys. When they saw me it was pure craziness. Turkeys flew left, turkeys flew right, turkeys ran left, turkeys ran right, and some turkeys even ran down the ski trails until spinning off into the woods. This all transpired in about two seconds and was done in complete silence – not one gobble. 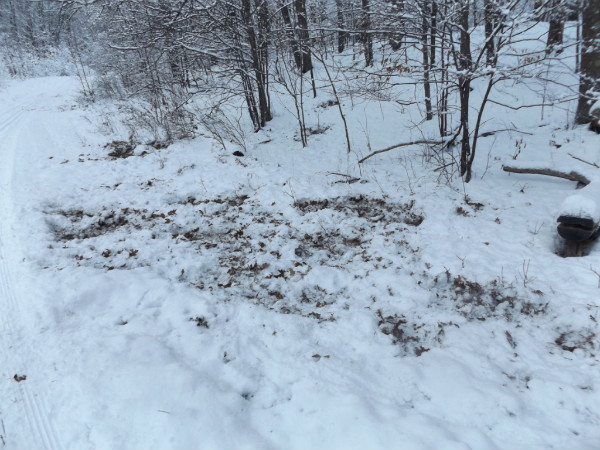 Only the turkey bed remains

It made me wonder if they had predesigned escape routes that each turkey followed in order to confuse the hunter or if it was just panicked reaction. If I had a gun, I don’t know where I would shoot, and by the time I made up my mind, they would have disappeared into the woods, so the panicked departure was effective. 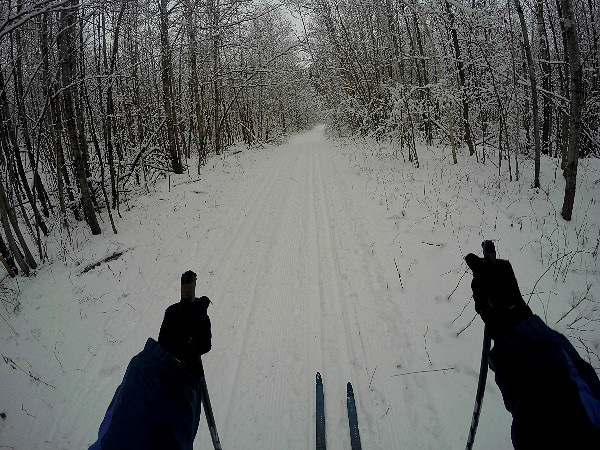 The only negative about my time at Beaver Brook is the trails are close to hunting grounds and on hunter even walked on some of the ski trails. I suspect it must be that pesky Eddie Haskel, but I can’t be sure. I heard some gunshots that were a little too close for comfort. I might think about wearing orange next time I ski here. The trails are part of the Beaver Brook State Wildlife Area, and they are multi use although people are supposed to stay off the skiing trails.

The hills are for the most part tame here, but there are some good sections that are kind of backcountry where the trail constricts and goes up and down and turns some corners in some pretty narrow corridors. It was so pretty here as these narrow lanes were lined with snow covered foliage thanks to the recent heavy snow. 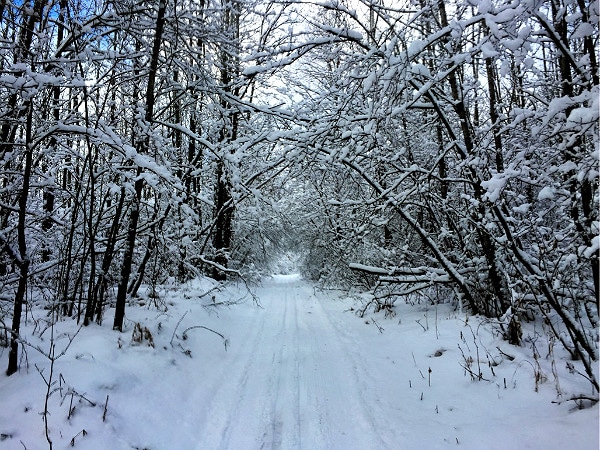 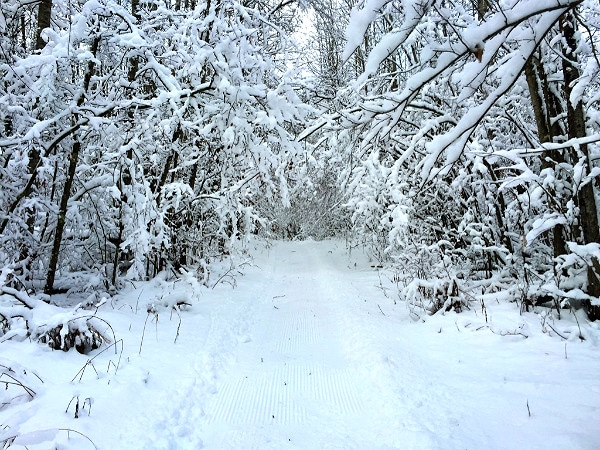 Both trail systems consist of a single trail that ends in a loop with smaller loops along the way. This is nice because you can augment your mileage by doing every portion of the trail system or you can cut sections off if you feel like doing less. Combined mileage for the two trails is 15 kilometers, so that is about nine miles, so you can ski for hours here if you want to keep doing the loops. If you can only do one trail, I would recommend sticking to the Beaver Brook Ski Trail as it has better hills and is more scenic than the West Trail in my opinion. They are both nice though. 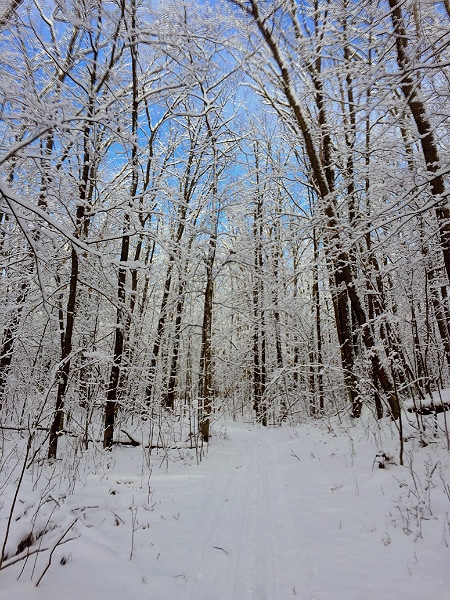 The trails are really well marked. At just about every junction there is a trail map with a pin showing where you are on the map. This is helpful at points because the are a lot of junctions at the end of the loops, so it can be tricky to figure out where you are if you are on the trail for the first time.

There are a lot of skiing options in the northwest corner of Wisconsin. It is easy to overlook the Beaver Brook cross-country ski trails due to the presence of the Birkie and Timberland, but I am glad I checked these trails out. They were in the best condition of any of the local trails, the scenery was beautiful, and the turkey/human ratio was 20/0 during my two days skiing.