When I looked at the mileage signs for hiking in Theodore Roosevelt, the first trail I was drawn to was the Achenbach Trail. It is 18 miles and the longest trail in the park’s Northern Unit. When I visit a national park, the first thing I want to do is hike the park’s most remote backcountry hiking trail. In Big Bend it was the Outer Mountain Loop and in the Great Smoky Mountains it is any trail other than the Appalachian. 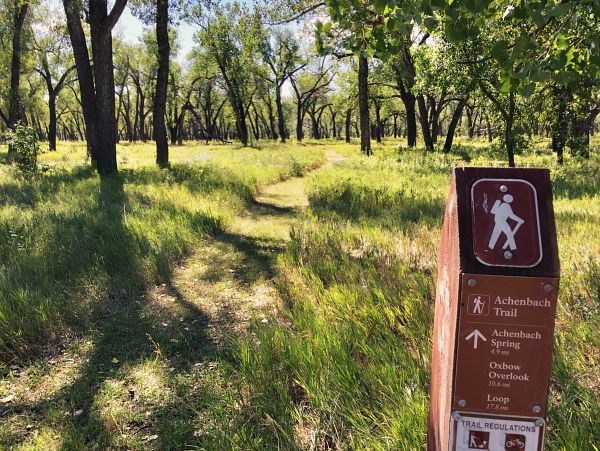 I arrived at the Southern Unit of Theodore Roosevelt National Park around midday on Saturday during Labor Day weekend. It was too late in the day to get backcountry permits and start a hike, so I enjoyed wild horses, bison, and deer on the scenic drive. I decided I would then get a camp spot and then leave for the North Unit first thing in the morning. 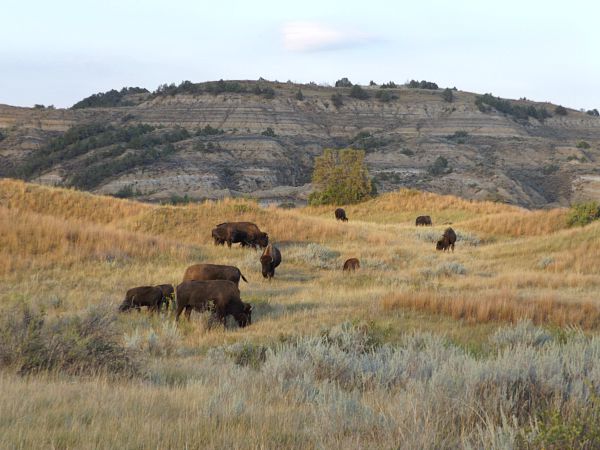 The campground was full in the South Unit when I tried to settle down. I decided to backtrack to Dickinson and get a hotel. I could have tried the Northern Unit, but I did not want to risk driving all the way there and having it filled up too as it was 55 miles north of the Interstate. This turned out to be a good decision. 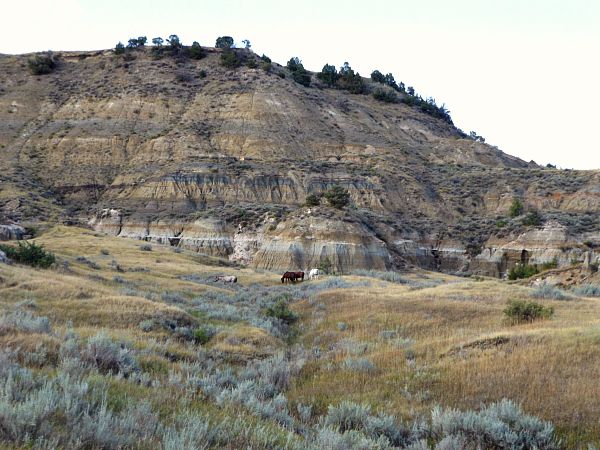 While drinking a beer in a Dickinson hotel room and watching college football, the familiar beep of a weather warning interrupted the telecast. Severe rain from a thunderstorm system with possible flash flooding was imminent. An hour later my hotel room shook as the storm hit with full force. I walked out to the exit and the wind was so strong the rain was coming down almost horizontally. I was glad I was not camping. Little was I to know that this rain would affect my ability to hike the Achenbach Trail.

The Little Missouri River flows through the park. It is navigable as a canoe route most of the year, but it can get really shallow towards the end of summer. I considered a canoe trip through the park, but figured the river would be too shallow by Labor Day. This rainstorm turned the park into a perfect canoeing destination and a not so great hiking park.

Next morning I got my free permit for backcountry camping the Achenbach Trail. The ranger warned me it was really tough in the backcountry and the river would be high. He warned the two river crossings could be four feet deep. I figured I would give it a try and hike as far as I could. If I could not get across or found a place that was too difficult, I would just backtrack. He also warned me that hiking on the wet clay was like walking on ice and could take an hour just to get up one hill. 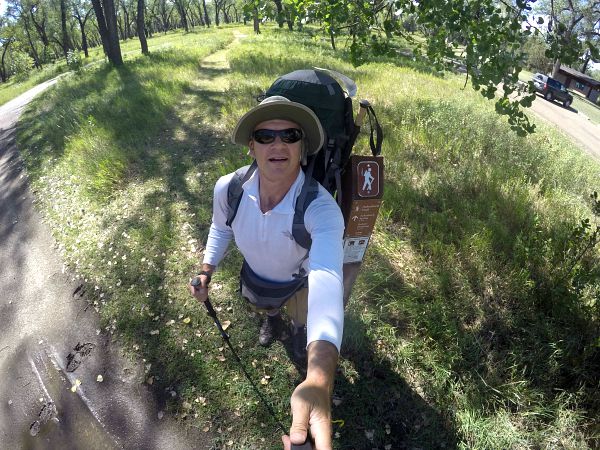 I was full of enthusiasm after 15 hours of driving and dodging a crazy storm. I was at last ready to hike the Achenbach Trail. I parked my car and got my gear ready and took the obligatory beginning of solo hike selfie with my GoPro. I started at the picnic area at the North Unit campground. I walked about a quarter mile and hit the first crossing of the Little Missouri River.

Failure to ford and hike the Achenbach Trail

The river was a deep muddy brown and flowing pretty fast with huge tree branches and logs swept up in the current. This did not look like an easy crossing. I got out my hiking poles and replaced my hiking boots with Vibrams and decided to scout the river. In no time I was chest deep in the muddy water, and I was not even in the strongest part of the current. I could tell the deep channel was on the other end near the opposite shore. I figured it could be over my head there. It definitely was not safe to continue, so I reversed. 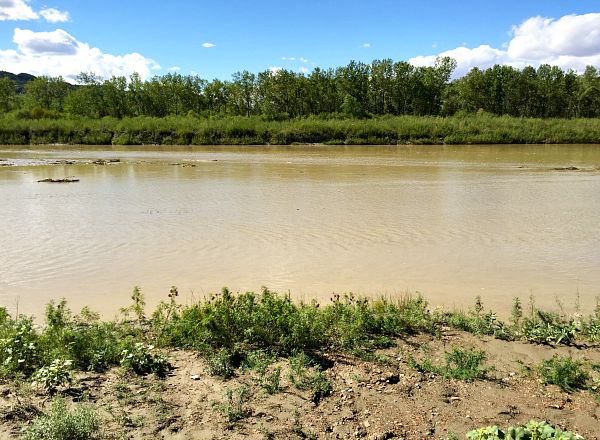 I scanned the river and thought there might be a shallower crossing further upstream. I walked up there and repeated the attempt. This time the river went almost immediately to my shoulders, so I got back out quickly. I went further upstream and tried again with the same result. After an hour of several attempts, I knew I was not crossing here today. I walked back through the campground and saw an amazing campsite right next to the river that was unoccupied. I put my hiking boots that were around my neck and my hiking poles on the picnic table to claim the spot and returned to my car. 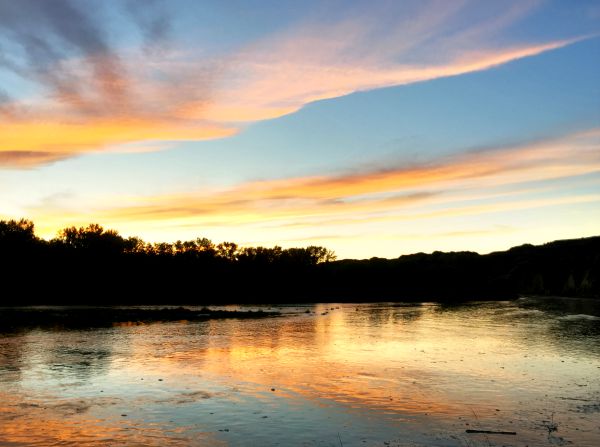 A new plan was hatched. I was going to stay the night here and drive the Northern Unit Scenic Drive and then return and enjoy a campfire at the campground. One saving grace of this plan is there are no campfires allowed in the backcountry. I love a campfire, so at least I would have this to look forward to. I also sat by the river after coming back from the scenic drive and watched the sunset over the Little Missouri River. There were scenic bluffs on the opposite side of the river and watching the sun set and change the color of the bluffs was fantastic. 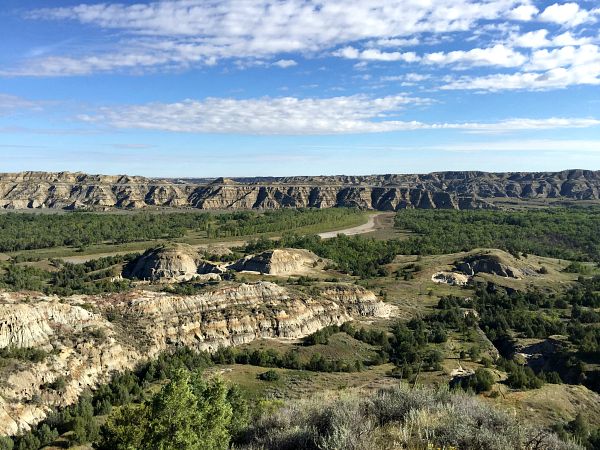 I was sorry I could not hike the Achenbach Trail today, but a good plan B developed. As it turned out, I was unable to hike the whole Achenbach Trail during my time In Theodore Roosevelt. The day I was leaving I was finally able to cross the river as the rain swelled river subsided to where it was only waist deep. I hiked the Achenbach for a couple of miles before I departed for other destinations in North Dakota further east. I definitely will return sometime to hike this entire trail. 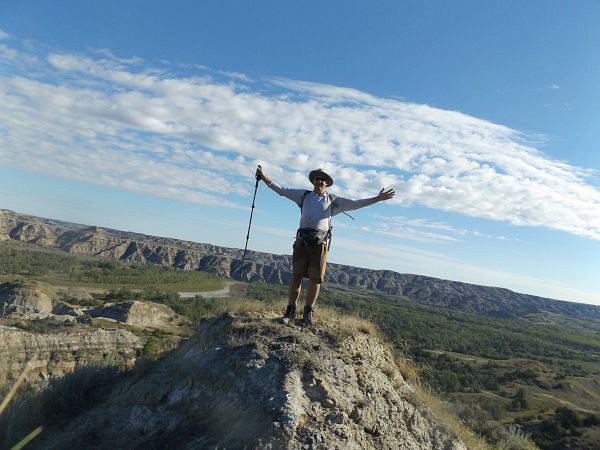 Feeling on top of the world on the Achenbach trail