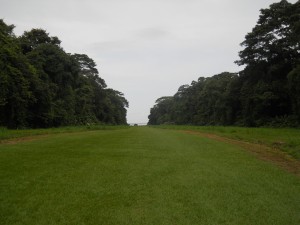 The Sirena airstrip in Corcovado

Corcovado National Park is a hard nut to crack said my prospective guide as he outlined to me the various options for getting into this amazing national park in Costa Rica. The wildest area of the park was Sirena Ranger Station, and I wanted to get there as quickly as possible.

Flying over the Corcovadan jungle on the way to Sirena

The easiest way usually was by a collectivo transport that drove back and forth between Puerto Jimenez and Carate twice a day. This was the rainy season, and there was doubt the bus could cross certain rain swelled sections and make it to Carate.

I could not take the early collectivo anyways, as it left Puerto Jimenez at 6am, and I had not secured my permit into the park. The park office opened at 8am, so I had to stay in Puerto Jimenez and get a permit first. My guide Felix, suggested taking a plane into Sirena Station.

I was hesitant to do this for several reasons. First of all, I wanted to hike in via Carate and the La Leona Ranger station. I love to hike, and this trail along the ocean sounded like a spectacular adventure. I was also not thrilled about paying $50.00 to fly in, especially after paying my guide for $150.00 for three days. This trip was getting as expensive as Quetico.

They say that time is money, and I felt I could not afford to not get into Corcovado as soon as possible. I only had ten days on this trip inside Costa Rica, and I had already frittered away two days in San José and one day on an all day bus trip to Puerto Jimenez. I did not want to spend another day in Puerto Jimenez, so I decided to bite the bullet and take the plane. A small plane flying into and over a jungle is also an adventure, just not as difficult.

There were several decisions I made during these ten days that I regret, including hiring my treacherous guide, but getting the plane into Corcovado and into Sirena Station was not one of them. The scenery from the back seat flying over one of the most spectacular jungles in the Western Hemisphere, arguably the world was worth the price of admission alone.

Then there was the convenience factor. I later found out the collectivo that left Puerto Jimenez only took prospective hikers halfway to Carate. They had to walk 15 plus grueling miles in the jungle heat to make it to Sirena. Only one person made it from the transport that day and two followed the next day.

While they were marching in the jungle, I was observing three kinds of monkeys, tapirs, crocodiles, and an amazing array of birds from the Sirena Station trails. I also had some awesome footage from my GoPro video camera flying into the station.

Squirrel monkey in the Corcovado jungle

After reading this, you may think Sirena is not wild because there is an airstrip there. The airstrip was basically a swath of trees cut in the middle of the jungle with a Ranger station. The ranger station used to be a farm. The rest is just jungle for miles around. Sirena is the heart of the Corcovado jungle and the place where you want to be when coming to this awesome park.