My first question when I heard about the Eleven Point River was why they just did not round down the name to ten. The answer is obvious. The Eleven Point river float trips goes to eleven. If you understand that reference then you have seen the movie Spinal Tap. The name gives the river an extra boost in appeal in my book. 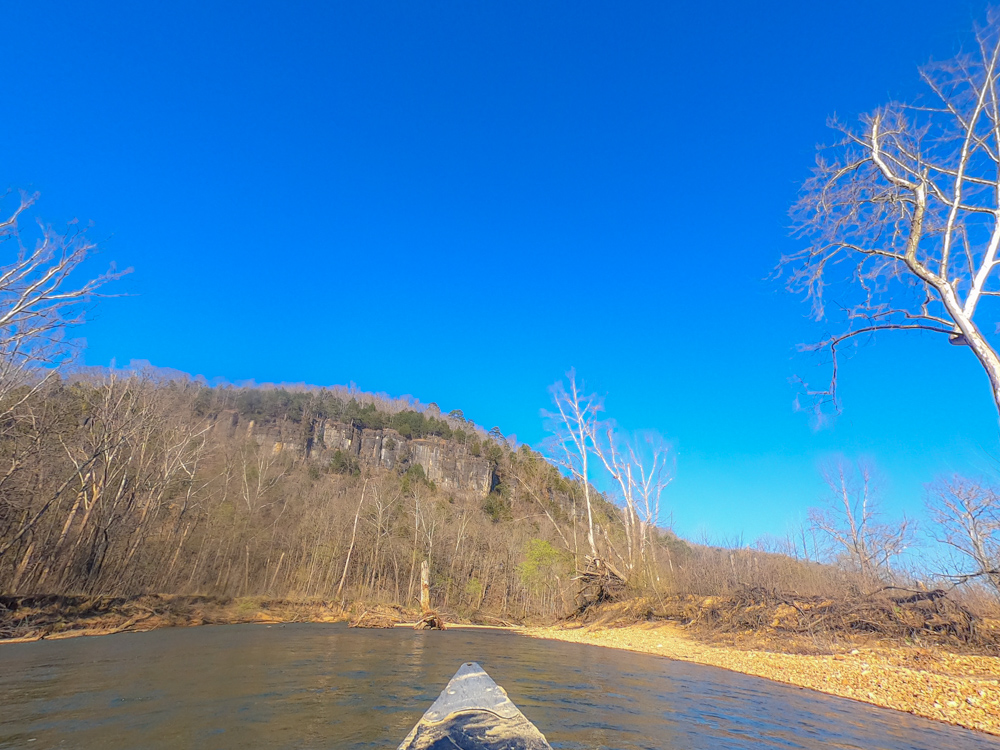 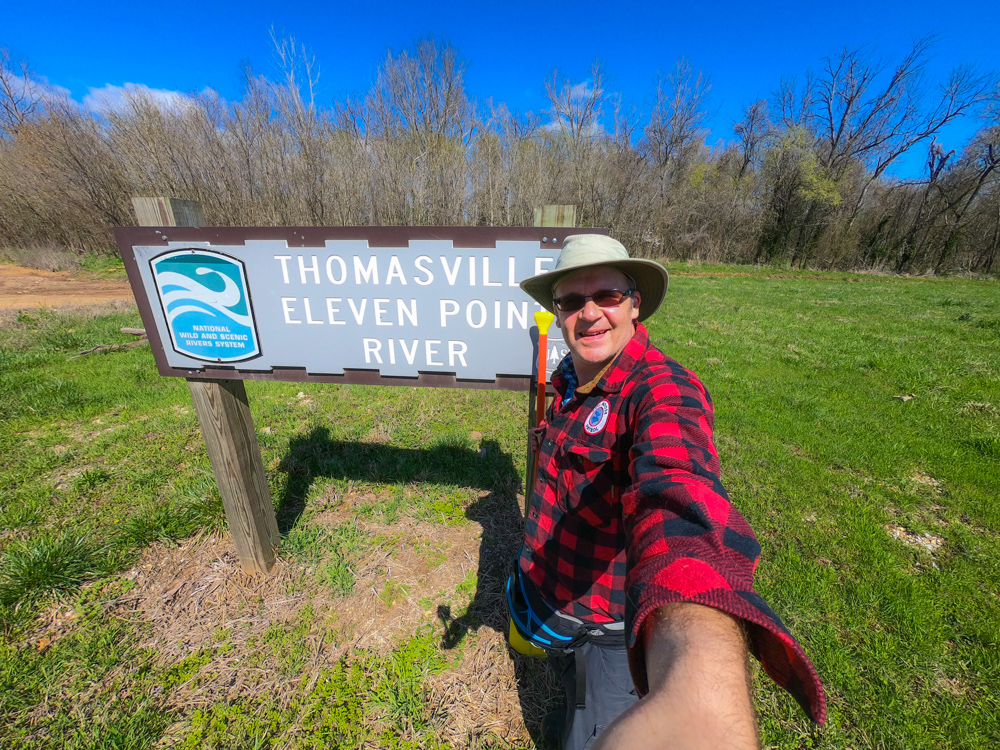 Selfie by the National Wild and Scenic river section by the access point at Thomasville.

On a recent spring break outing to Missouri, I decided to see what the Eleven Point River was all about. I have been coming down to paddle the Ozarks National Scenic Riverways for years, but I have always stuck to the Current or the Jacks Fork River. 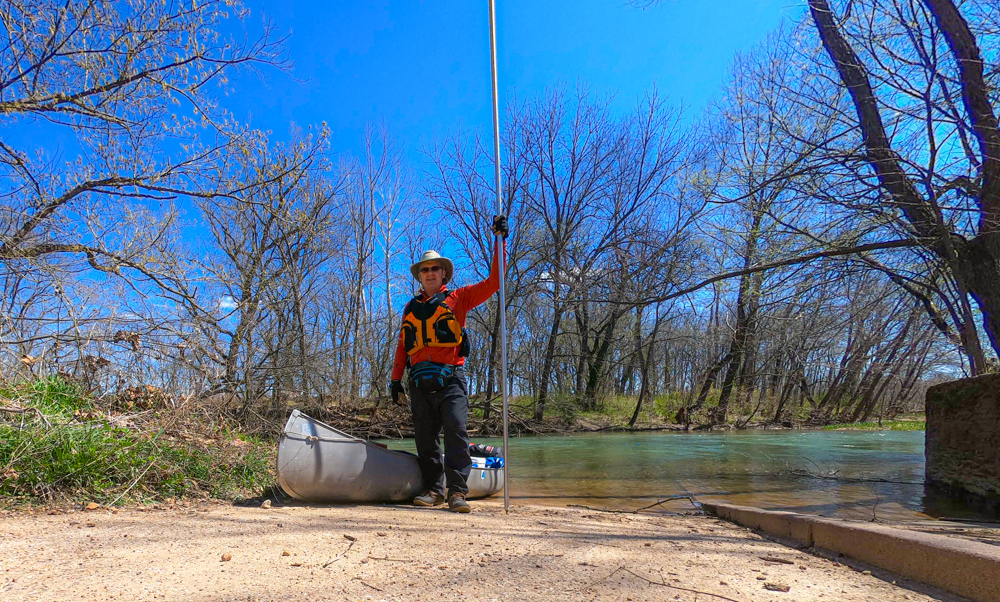 My plan was to put in at Thomasville, and paddle to Riverton and camp two nights on the river. I contacted Hufstedler’s Canoe Rental in Riverton and arranged a shuttle to Thomasville. Their canoe rental is a quarter of a mile walk from the take-out, so I parked my car there. I also arranged for a cabin rental for the night after my river adventure ended. 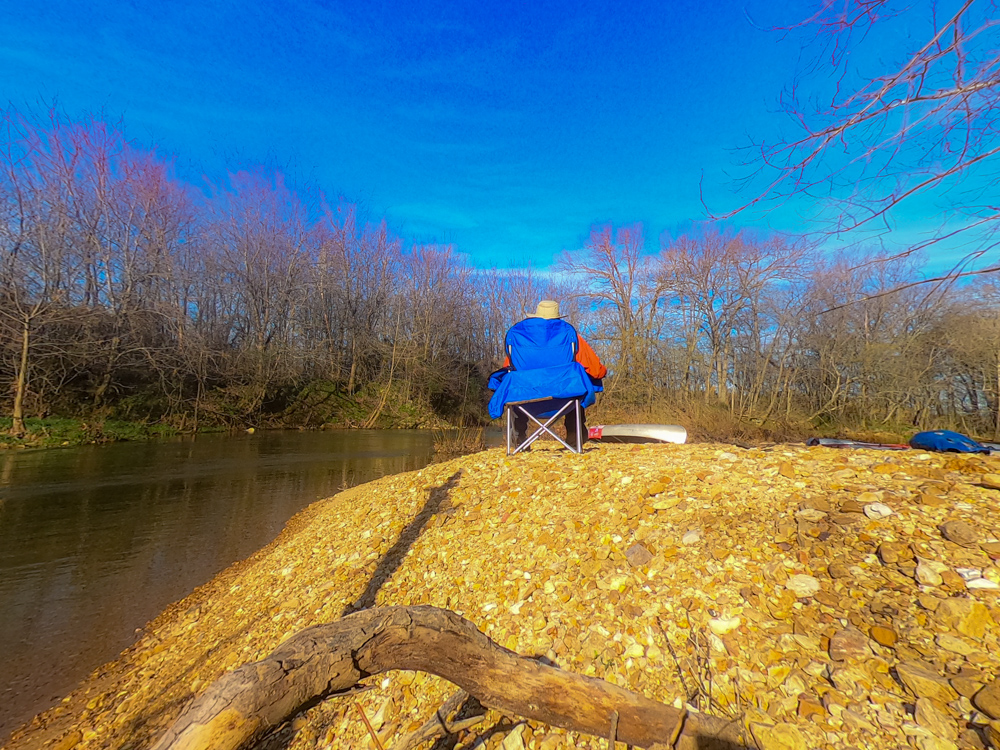 I spent a lot of time on Day 1 watching the river flow from my campsite in Thomasville.

As soon as I was dropped off in Thomasville, I realized that the Eleven Point River had some of the same magic as the Current and Jacks Fork River. The water was crystal clear with golden gravel bars and bluffs and cliffs along the river. The river was quite narrow in Thomasville and resembled the Jacks Fork although water levels were somewhat high and the current had a decent clip to it. 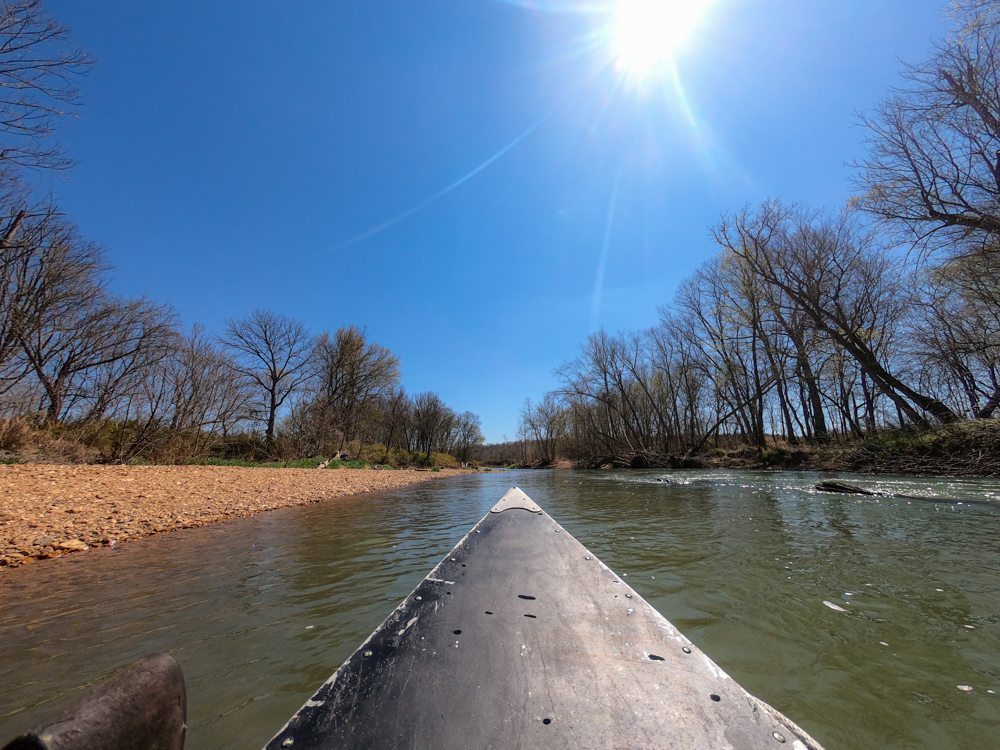 My only river pic from my short lived first day paddle

I paddled around two corners and there was a gorgeous campsite. I had a hectic couple of days getting down to Missouri, which included a second Covid vaccination, so I was a little wore out. Having made the mistake of passing on a good campsite early in the day before, I decided to get off the river early and enjoy the day, the scenery, and relax. 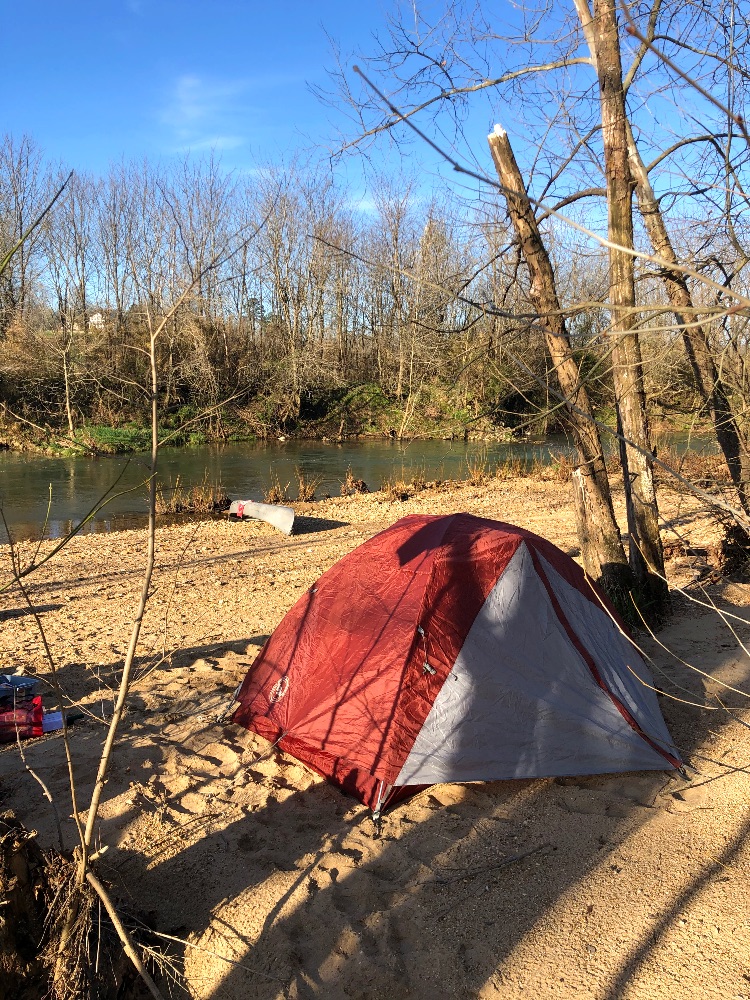 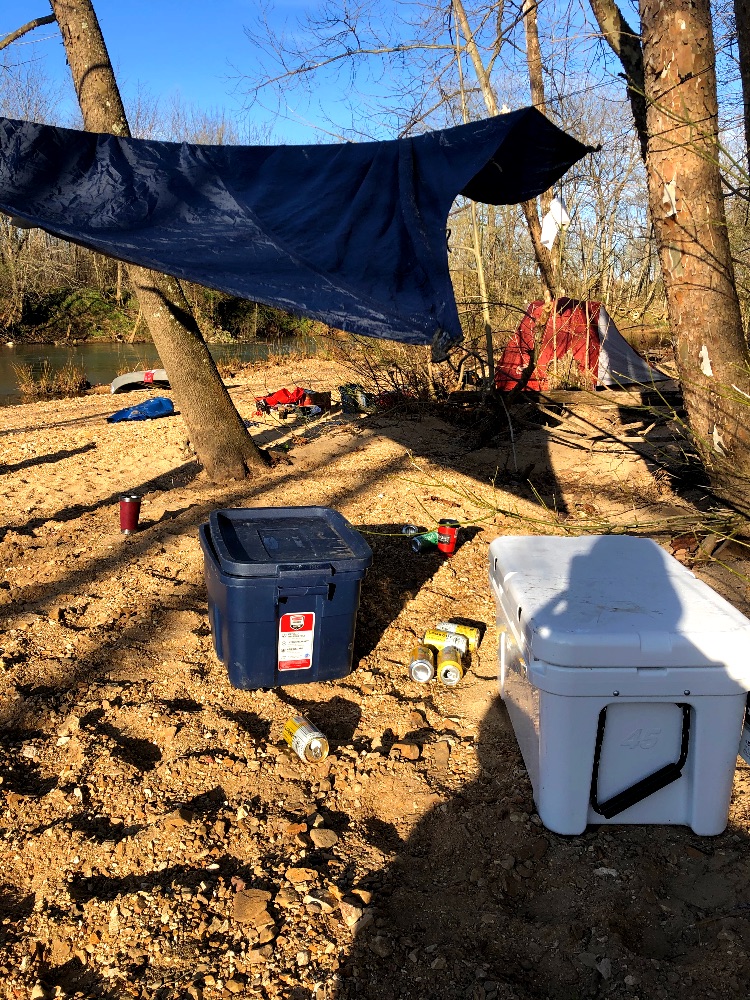 Eleven Point River float trips camp with a few dead soldiers – Please note – Campground was left cleaner than I found it as I cleaned up all of my trash and some trash from other campers.

Looking back on this decision, I wish I would have paddled about ten miles because the farther you go towards Riverton, the more remote the river is. There were plenty of amazing campsites along the river I paddled past the next day. I only saw one kayak paddle past me while I was at this campsite, so I had tons of solitude, but the river was definitely prettier and wilder as you adventured deeper into the Mark Twain National Forest. 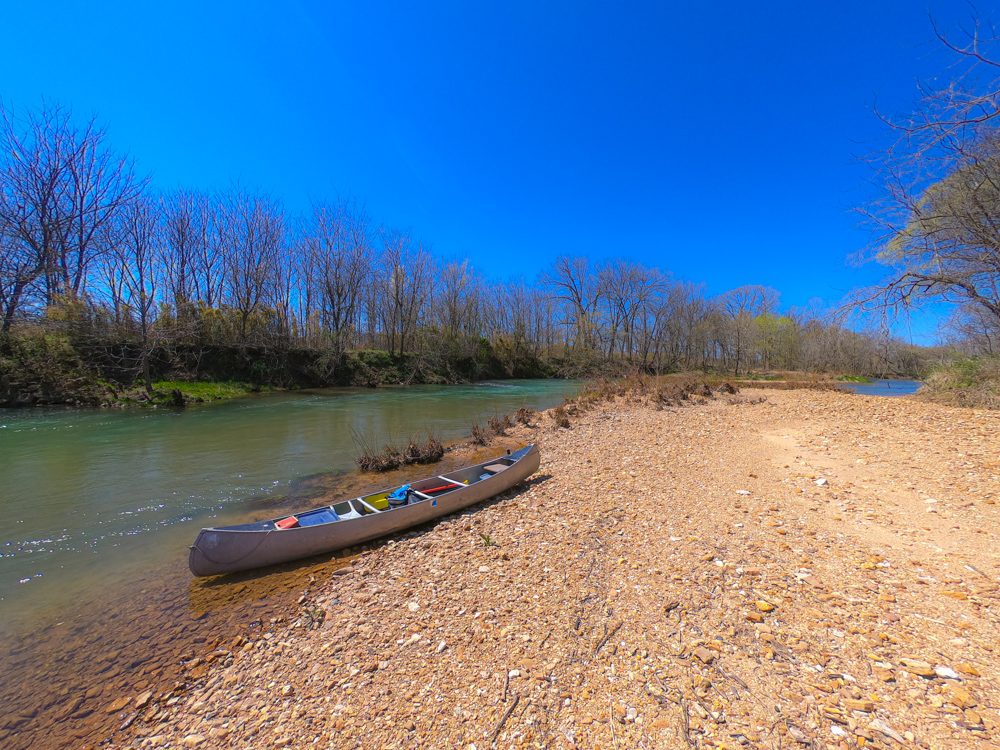 No regrets though as I enjoyed a beautiful day along the river. I hung a small tarp and sat under and protected myself from the sun and enjoyed one craft beer after another while soaking in the gorgeous day and scenery. Later, I made a campfire and a full moon came up over the river. It was a memorable evening.

Nothing like a full moon to end a beautiful day on the river.

The other drawback to ending my first day so early was I really had to make time and distance the second day. I woke up and got on the river as soon as possible with the intent to put some miles in. It was another really nice day although a little cool. 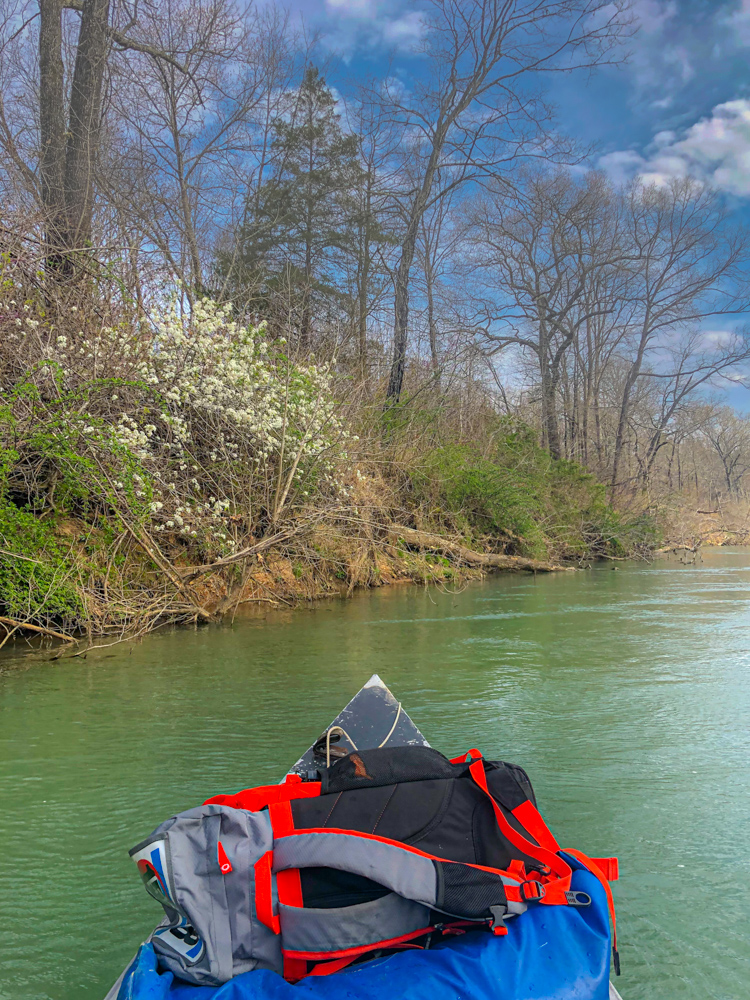 One can usually expect a little warmer weather in Missouri in early April, but temperatures were not much warmer than they were in Chicago. There were not leaves on the trees either although a few dogwoods and redbuds had bloomed which provided some color to the bleak forest. 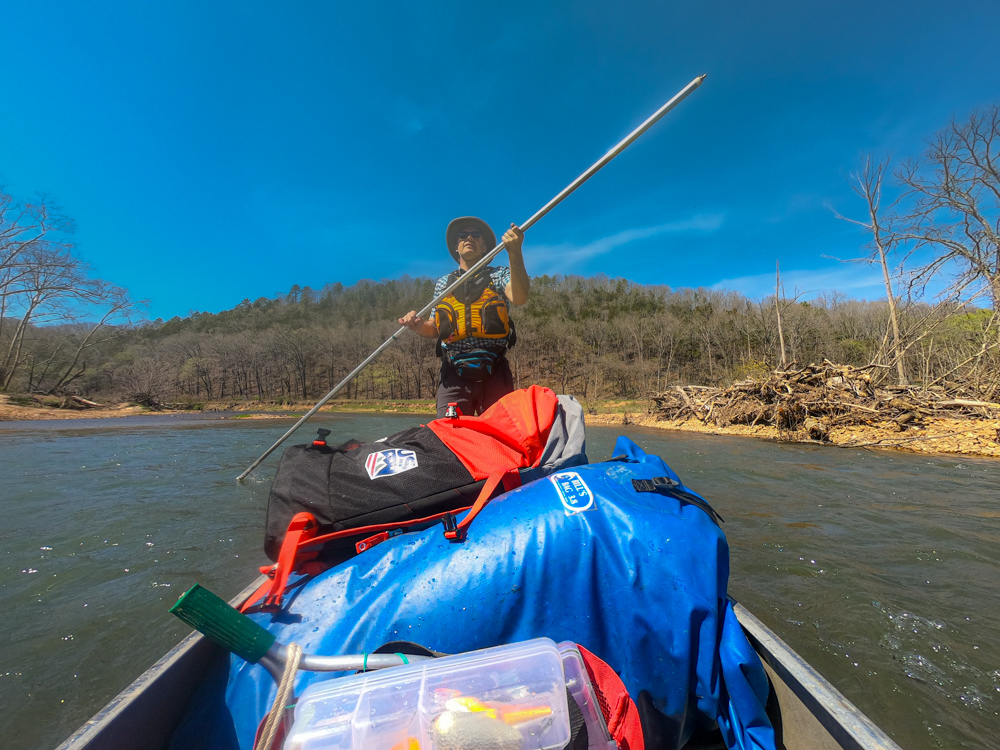 Started off poling, but soon sat down

I started off poling, but due to the strong current, I did not feel all that comfortable standing up. Early on, I came around a corner and the whole channel was obstructed by a log jam. Due to the current, I could not reverse and go back the other channel. I just floated into the log jam straight on and was able to pull my canoe over it. 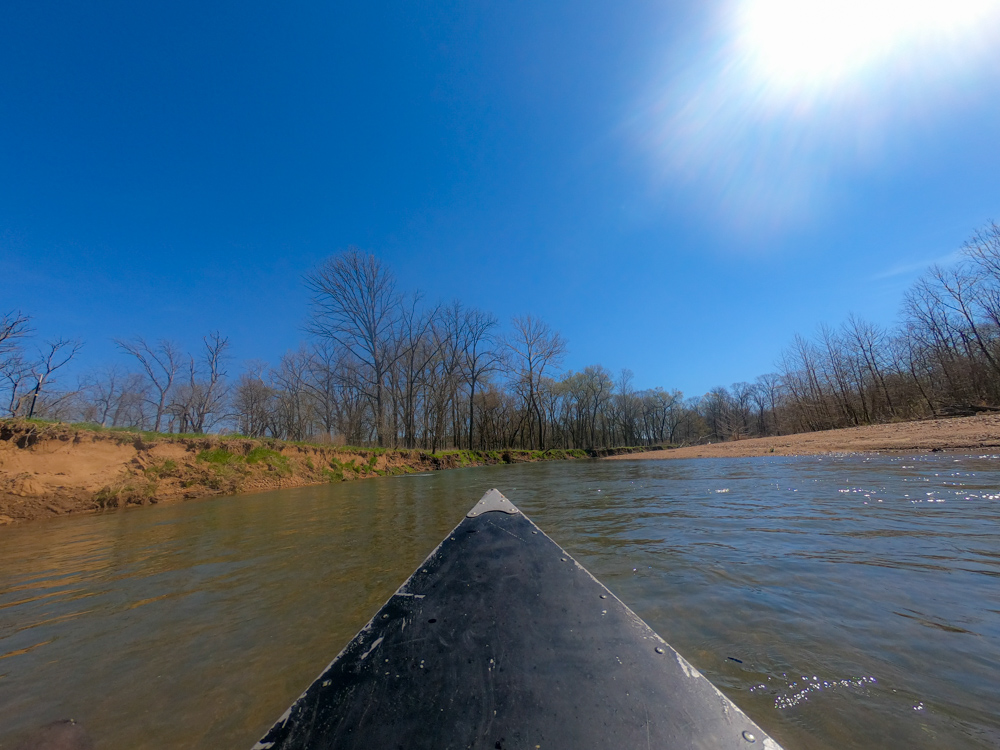 The start of a long day paddling

Changing character of the river

I mentioned the river resembled the Jacks Fork at the beginning, but this changed rather quickly. The river began to build as tributaries and springs entered into the river. The river then became more like the Current and widened out. By the end of the trip, I felt like the flow and width was even bigger than the Current, at least the stretch north of eminence. The most notable reason for this is the addition of 200 gallons of water per day that joins the river at Greer Spring about ten miles into the trip. 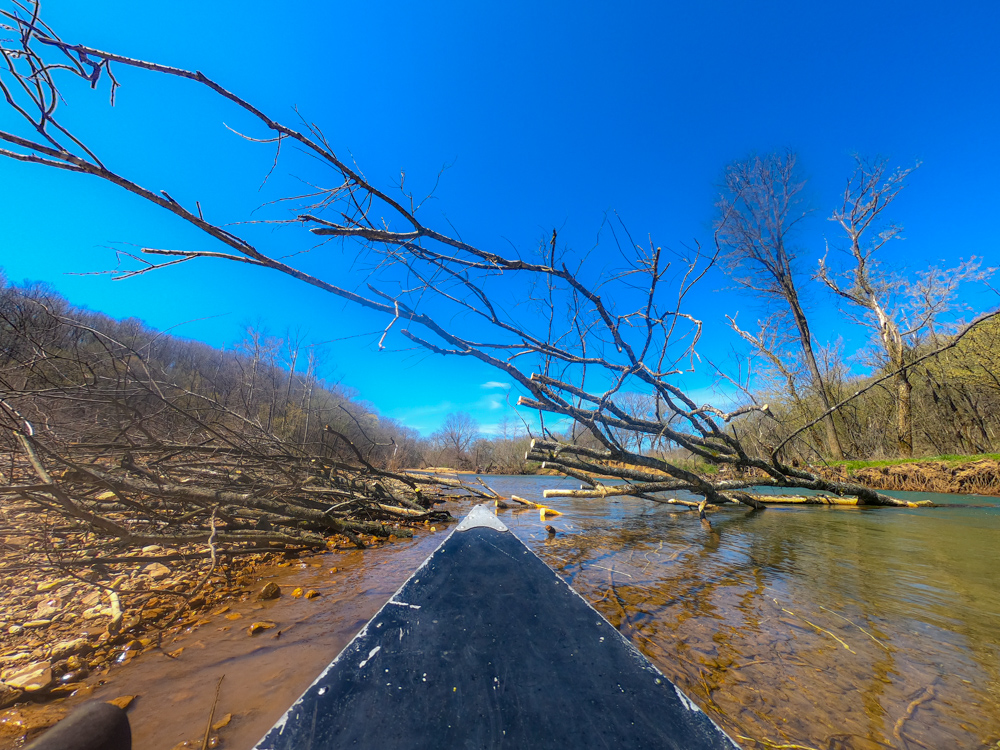 Sawed my way through a logjam on the Eleven Point River

Due to the current and semi high water, I had no trouble making up time lost from the early stop the day before. There was one more deadfall that obstructed the river, and I took a half hour sawing through it. After that, the river was clear of logjams. There were many small rapids, but at this water level, I breezed right over them through the standing waves. 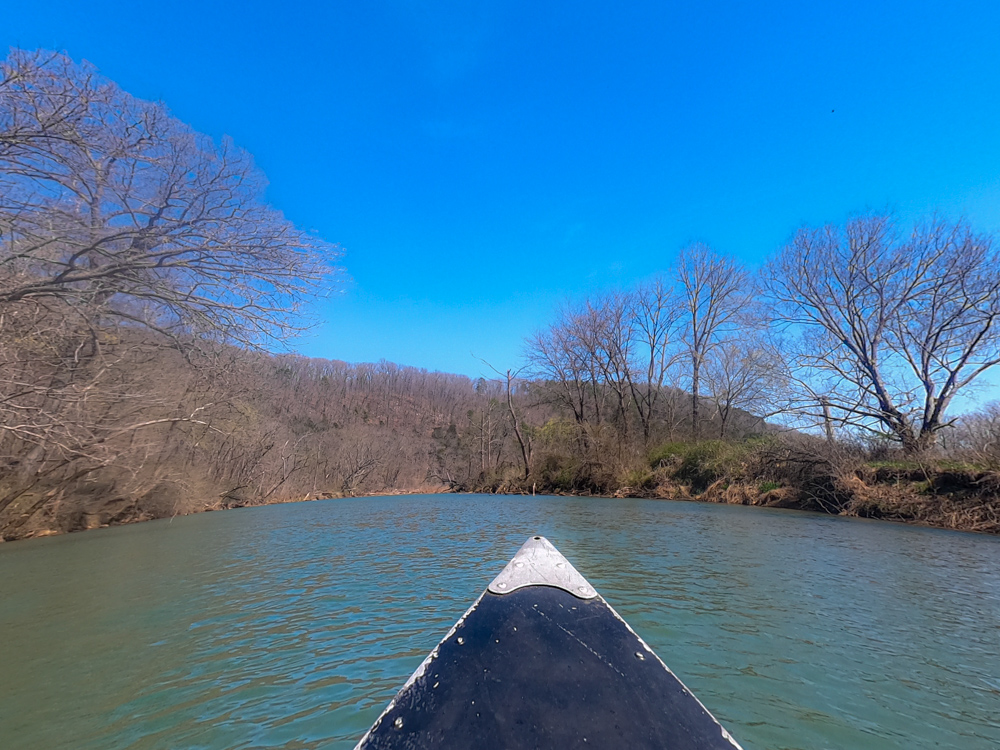 This picture from day two shows a much wider river from day one.

A few miles before the Greer Bridge, there was a low water bridge at a float camp. I had to portage my canoe and belongs to the other side. Not expecting a portage, this was rather a pain in the ass. It was an unfortunate obstacle on this beautiful river and hindered the experience and was kind of an eyesore. 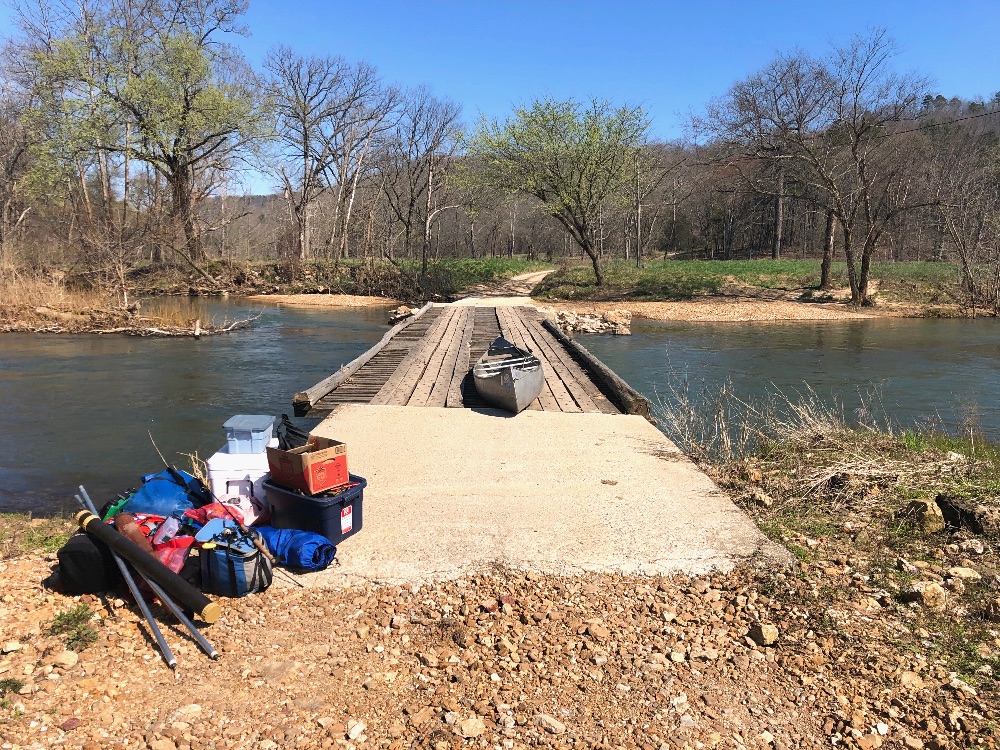 A big thumbs down and loud boos for the low water bridge near Greer on the Eleven Point River.

Eleven Point River gets an 11 for scenery and remoteness

The rest of the day though was just gorgeous. The river flowed through the Mark Twain National Park. Despite all the miles I traveled on this day, I did not see one human except for two cars going over the Greer Bridge. I did not see one other paddler or one fisherman on the shore. 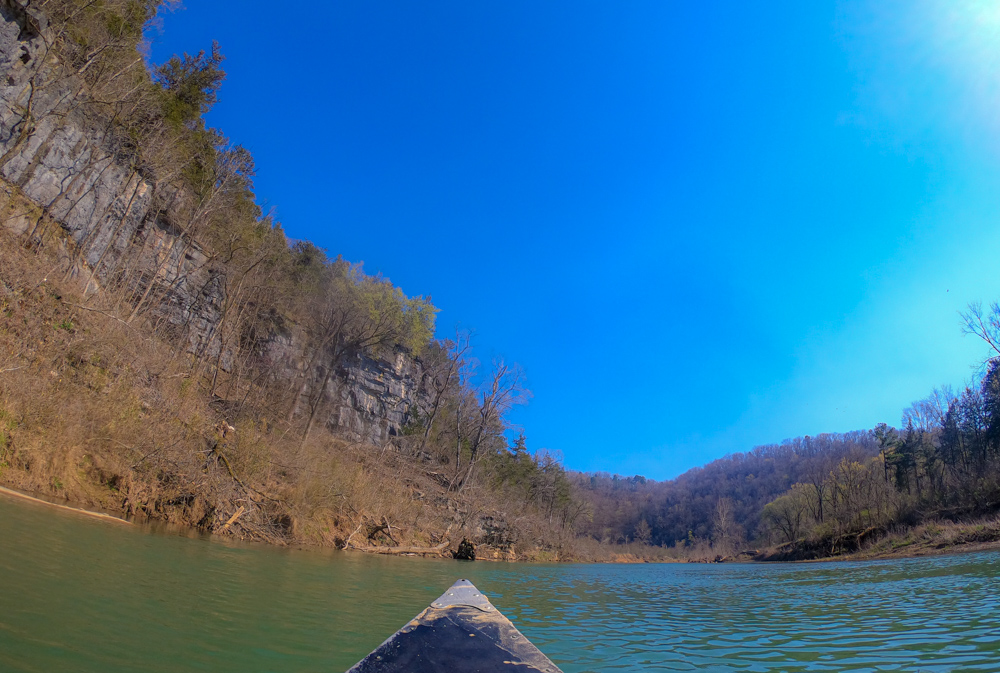 Amazing bluffs on an amazing day on the Eleven Point River

The scenery was as stunning as the forest was remote. Cliffs as high as the Buffalo River towered over the Eleven Point. My one problem in making time on this day I needed to put in miles was I was stopping to take so many pictures. 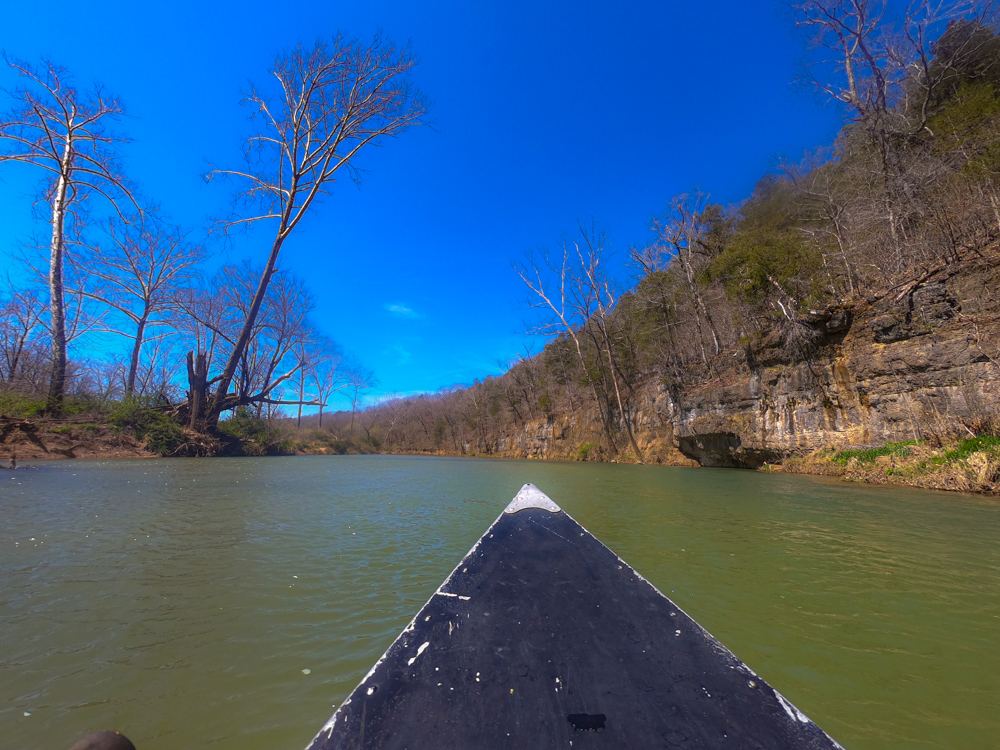 The scenery started to gradually improve with small cliffs and kept getting better. 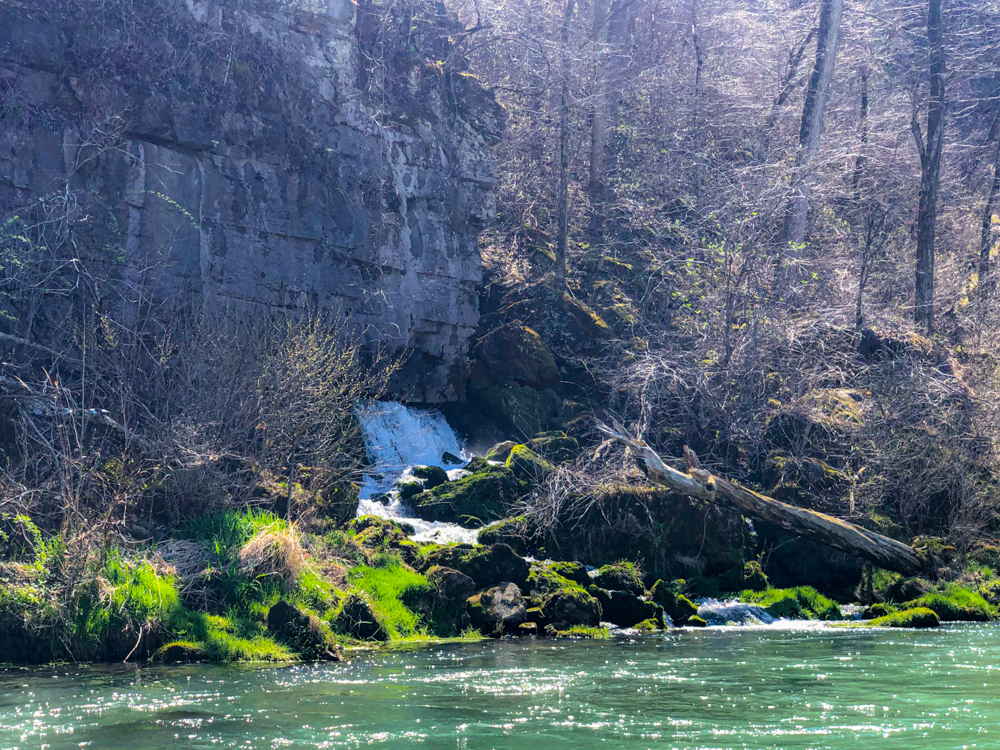 A record number of river otters

The wildlife highlight was seeing a record number of otters in one day. I once saw ten river otters on the White River in northern Wisconsin. This new record was partly due to being on the river later than usual. I saw several lone otters feeding as it got near sunset. 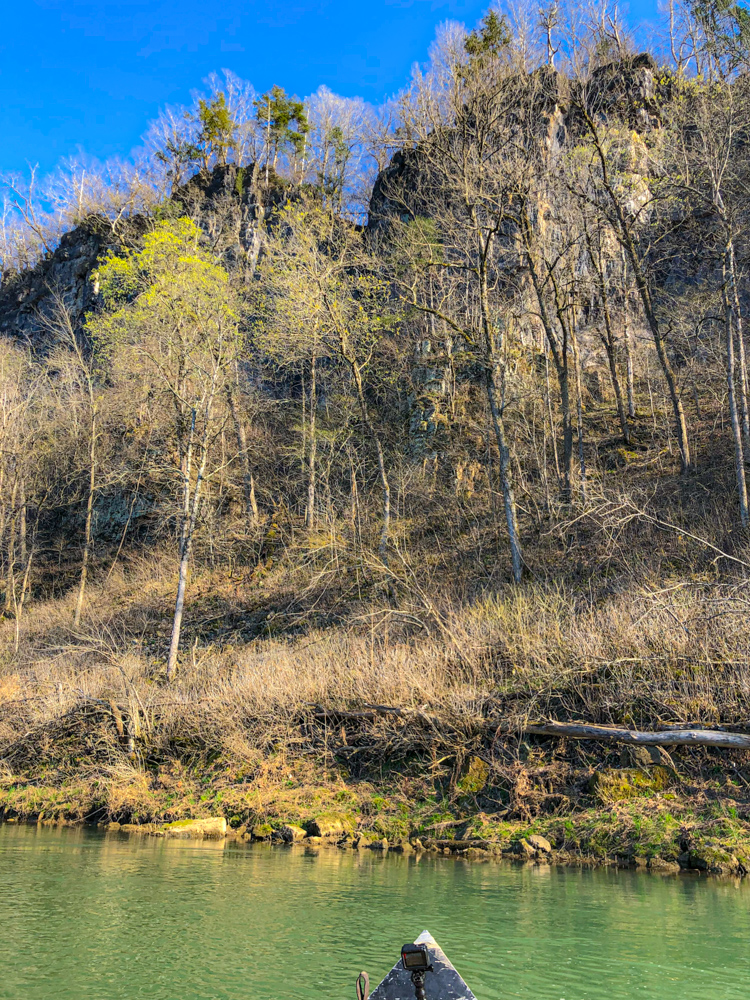 The other reason is I saw ten otters together at once. I was fiddling with my camera when I heard a stampede break out river left. I looked up expecting wild horses. Instead it was otter mayhem with ten running parallel to me on the shore, and they jumped into the river in formation. They frolicked ahead of me as they disappeared around the corner. 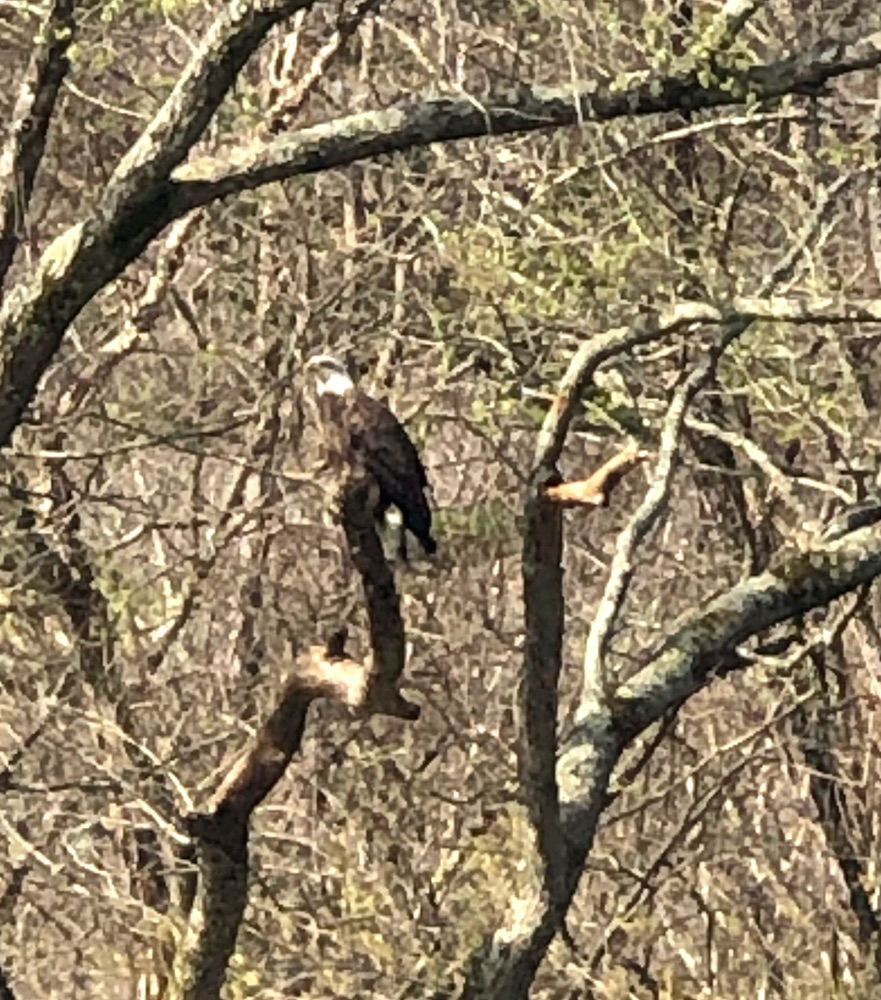 Besides otter, I saw a few bald eagles and tons of pileated woodpecker. The night before a beaver was slapping its tail in front of my campsite. It was apparently not pleased with my presence. 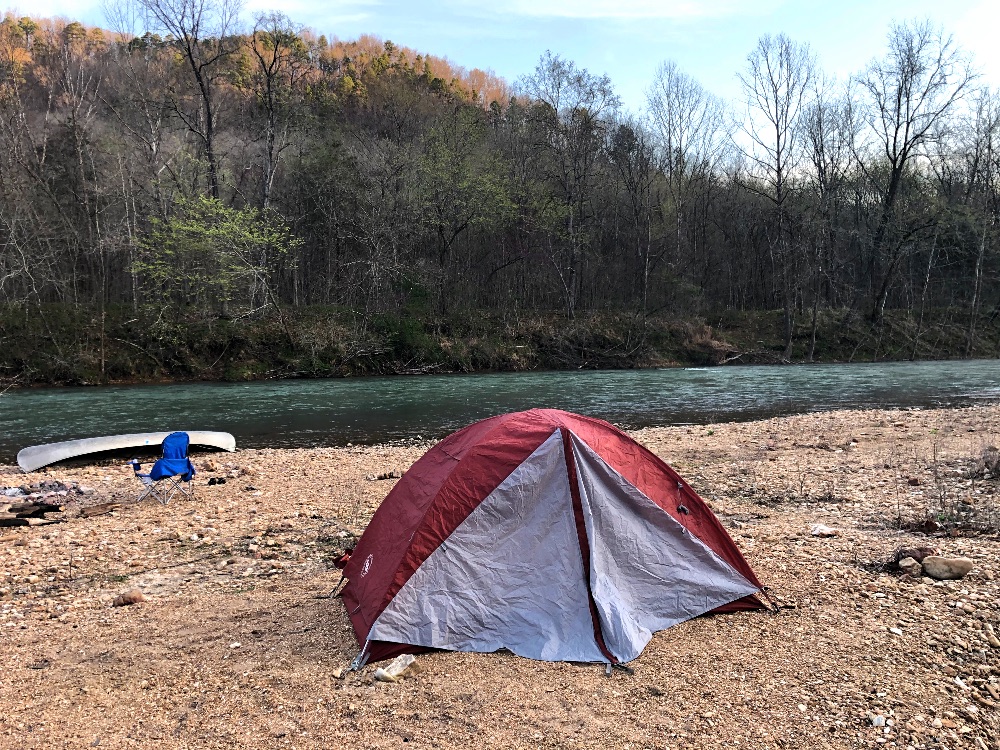 Another campsite and full moon

I finally made camp around 7:30 p.m. I set up my tent and quickly got a fire started. My camp was at the base of a bluff and the moon rose over the bluff making for another incredible Ozark Missouri scene. 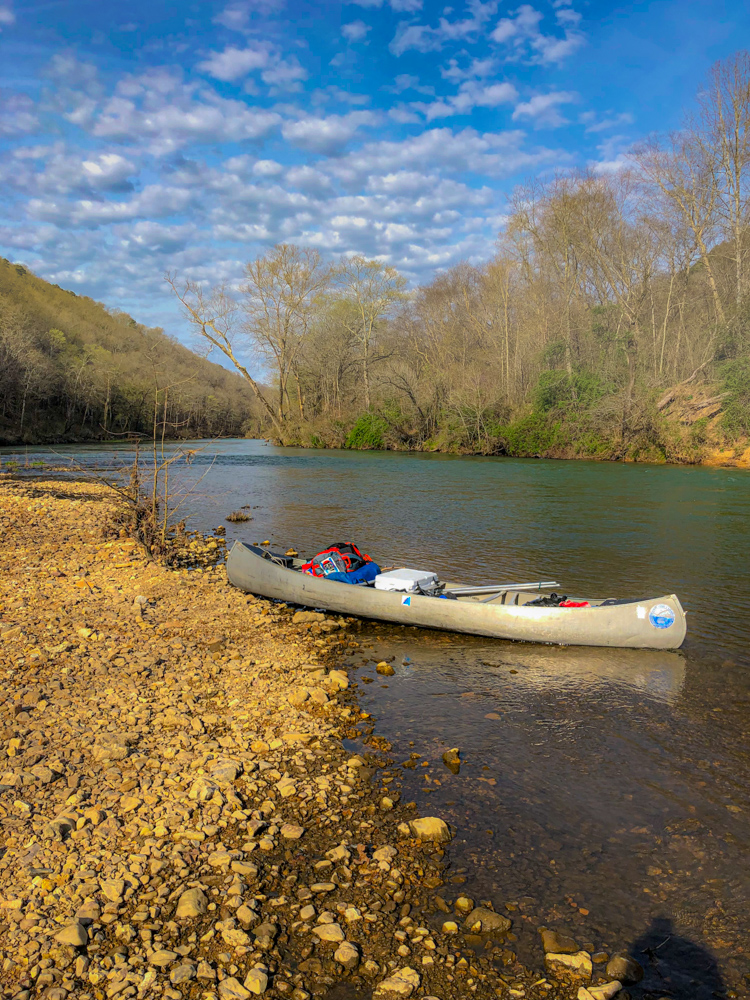 I woke up the next day to a cooler morning. The sun took awhile to rise over the bluffs to warm things up along the river. Its presence was short lived as a cold front rolled through and brought a little rain and the sky clouded over.

Since the weather went south, this gave me more of an impetus to head back to the canoe rental and my cabin as quickly as possible. I battled some wind on a few stretches and some rain, so it was not the best paddling day weather.

I heard some movement in the brush to my right coming from the shore. It was a decent sized animal, so I figured it was a deer. To my astonishment, a wild boar appeared in a clearing. I continued downstream, and I heard more rustling from the shoreline and another pig appeared in front of me. This time, the razorback actually got in the water and swam across right in front of the boat. I could have paddled up to it and hit it over the head with a paddle. That was how close it was. 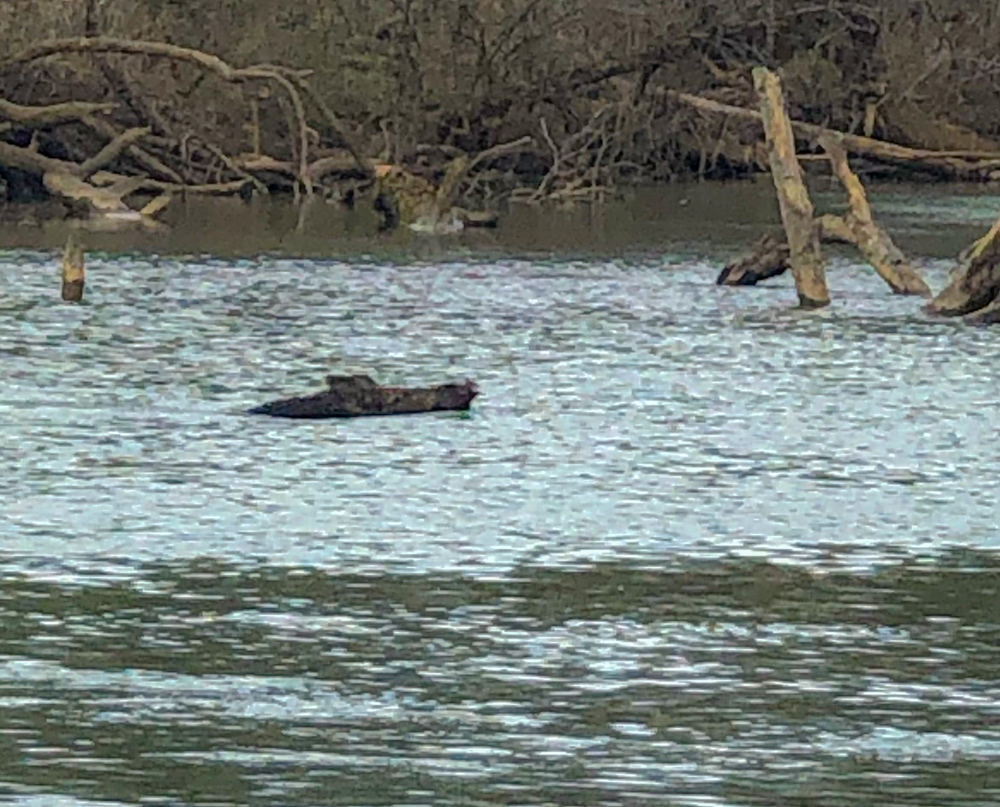 I have heard about the legendary Arkansas razorback my whole life, but have never seen one. I have seen a wild boar in the Smoky Mountains, but this was my first Ozark sighting.

Thumbs down on Hufstedler’s cabin

I took out at Riverton and got my car, loaded my canoe, and returned to the cabin. I would not recommend Hufstedler’s Cabin for many reasons. First of all, the scenery from the cabin was pretty decrepit. There was an Amityville Horror type of house that looked like it recently burned, so it was just the hulk of the house. There were canoes and run down buildings all over the property, which was a shame because this setting is right in the National Forest. 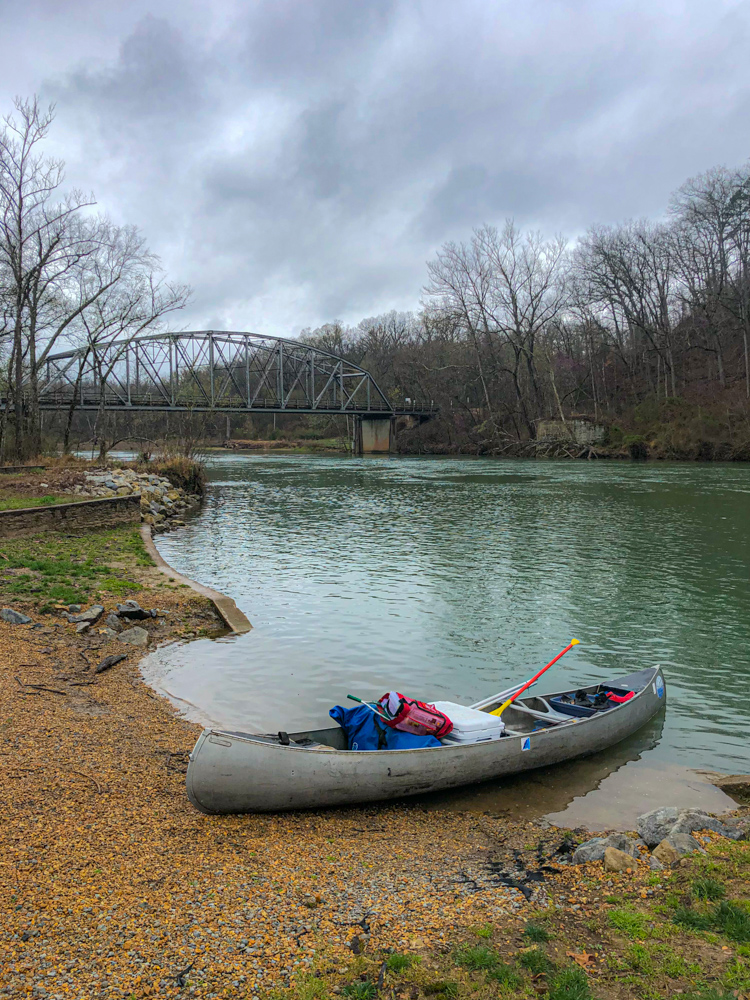 Then I could not get the heat to work in my cabin, and it was 50 degrees. I could call them because there was no cell reception and no Wi-Fi (another big downer). Later that night, I drove into town and called, but I could not get a hold of them. I was disappointed because I thought staying at their cabin would be like staying in the great outdoors for another night, but have some amenities, but having no heat and no Wi-Fi really sucked. I recommend their rental and shuttle service, but not the cabins.