Posted on May 8, 2021
In Adventure travel, fishing, United States
10 comments

I have paddled the Current River and Jacks Fork Rivers in Missouri for decades. As many times as I have canoed these scenic rivers, I have never once fished them. I have always wondered what it was like to go on a Current River fishing adventure. I finally made that dream a reality on a recent Spring Break trip. 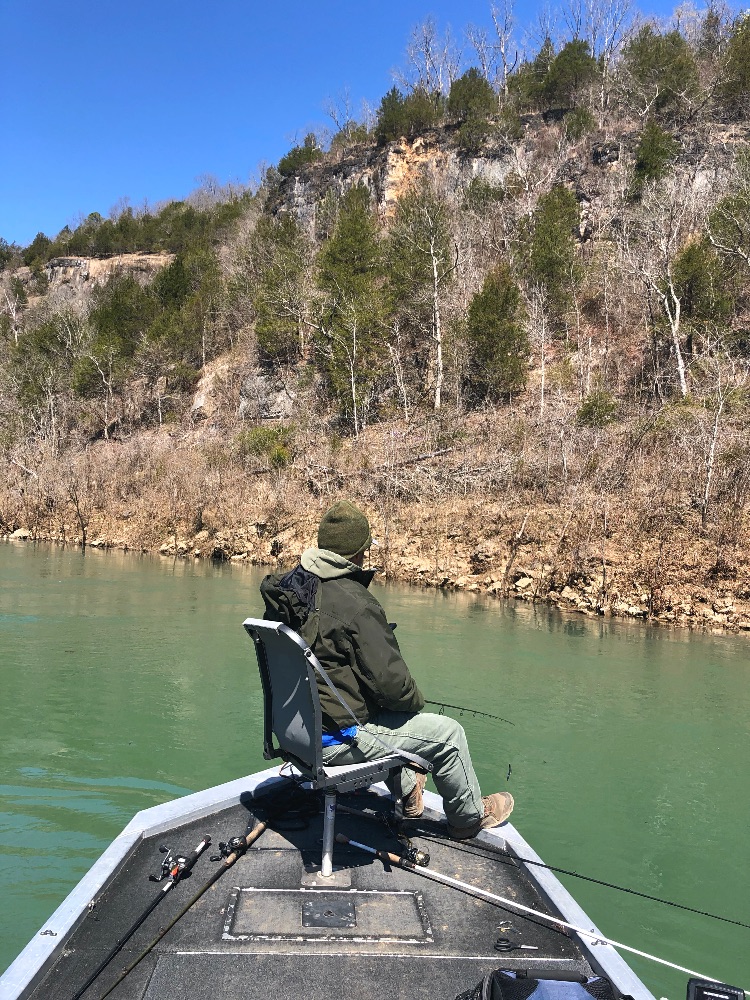 Does it get any better than this. Current River fishing adventure on the first national park to protect a river system.

A few years ago, while attending the Chicago Travel & Adventure Show, I stopped by the Visit Missouri booth. They actually had a professional fishermen as part of their crew welcoming prospective visitors. I have never seen that at a travel show before, and I was quite impressed. 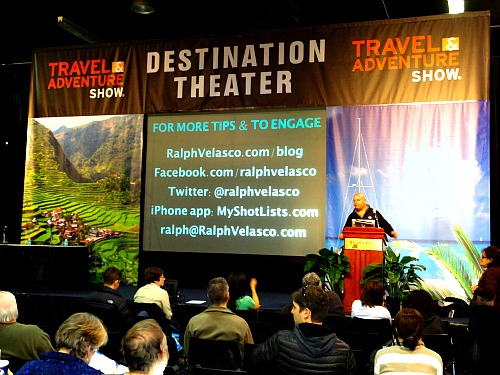 Related: Chicago Travel & Adventure Show to plan your next trip

I shook hands with Scott Pauley and exchanged cards. He said he would be happy to show me around some of the great fishing holes in the state. He said Missouri has some of the best fishing in the country. I thought that was kind of perhaps an exaggerated boast, but I definitely wanted to find out for myself.

Unfortunately, I was unable to hook up with Scott when I came down, but he introduced me to Bill Smith from Scenic Rivers Guide Service. One of only three guides that the National Park Service has issued a guide license for on the Ozark National Scenic Riverways. 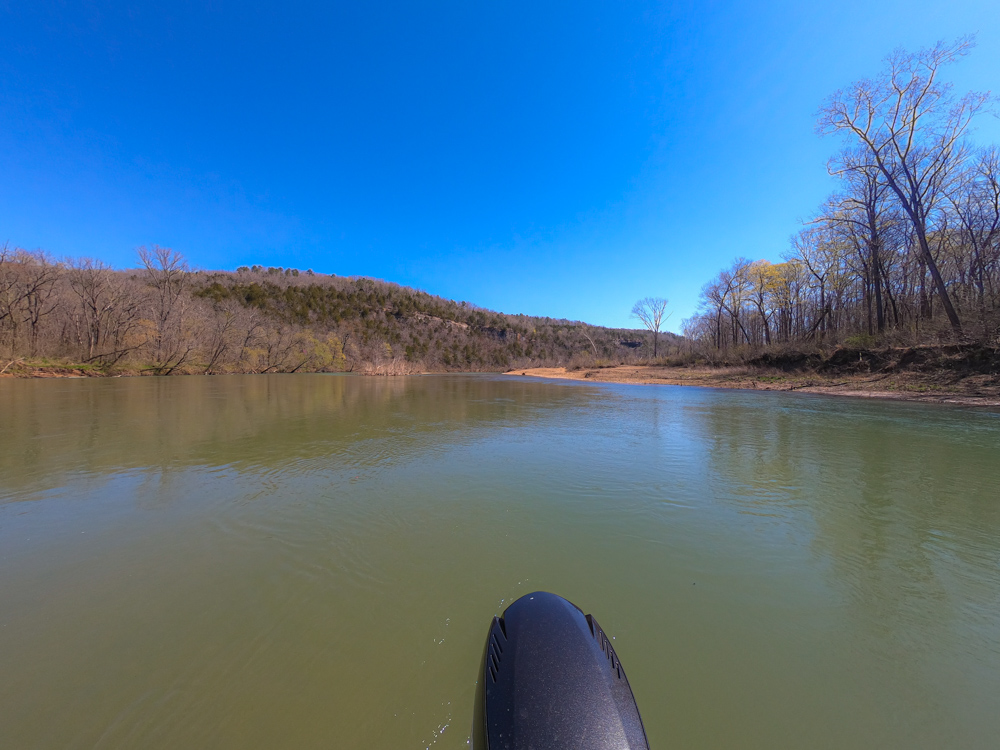 The Current River and Jacks Fork River make up the Ozarks National Scenic Riverways, which was the first national park area to protect a river system. The rivers are spring fed and crystal clear and feature scenic cliffs and bluffs, golden gravel bars, and remoteness in the beautiful Mark Twain National Forest.

Eminence, Missouri is the heart of the Ozark National Scenic Rivers. The Jacks Fork flows through town and the confluence with the Current River is not far away. In fact, that is where the Current River fishing adventure begins. We met at the Sinclair in Eminence and drove to the boat landing at Two Rivers. 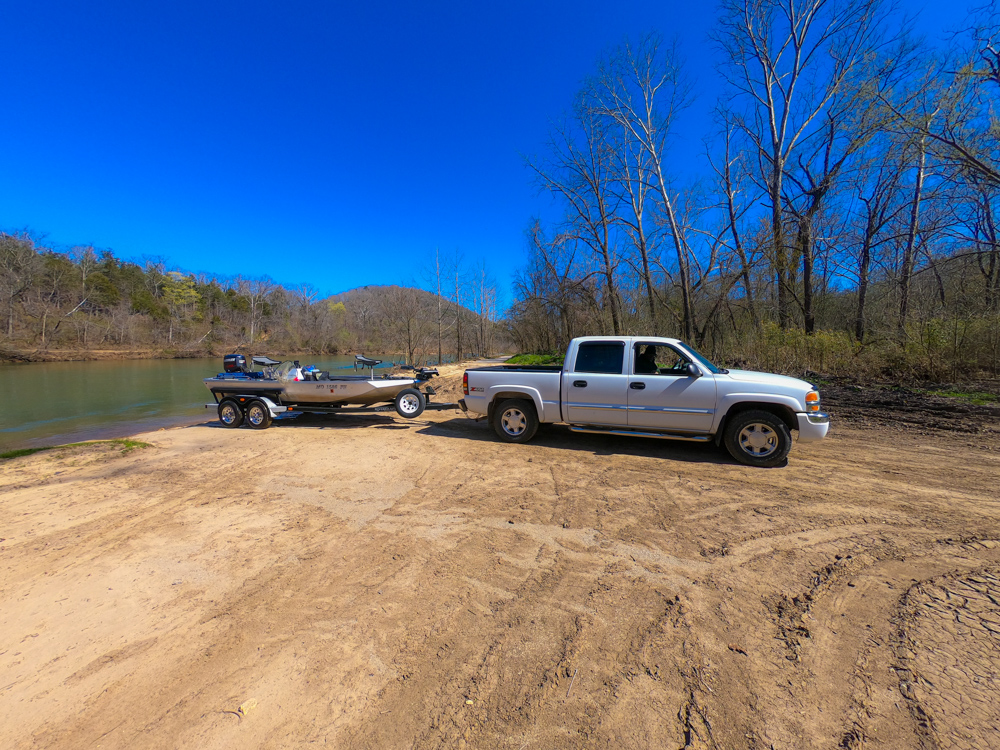 It was a beautiful day, but icy cold for Missouri standards. Temperatures were in the low 40s with a chilly wind that just cut through you especially when cruising on the river in the boat. With such a significant cold front rolling through, I knew it would not be the ideal day. 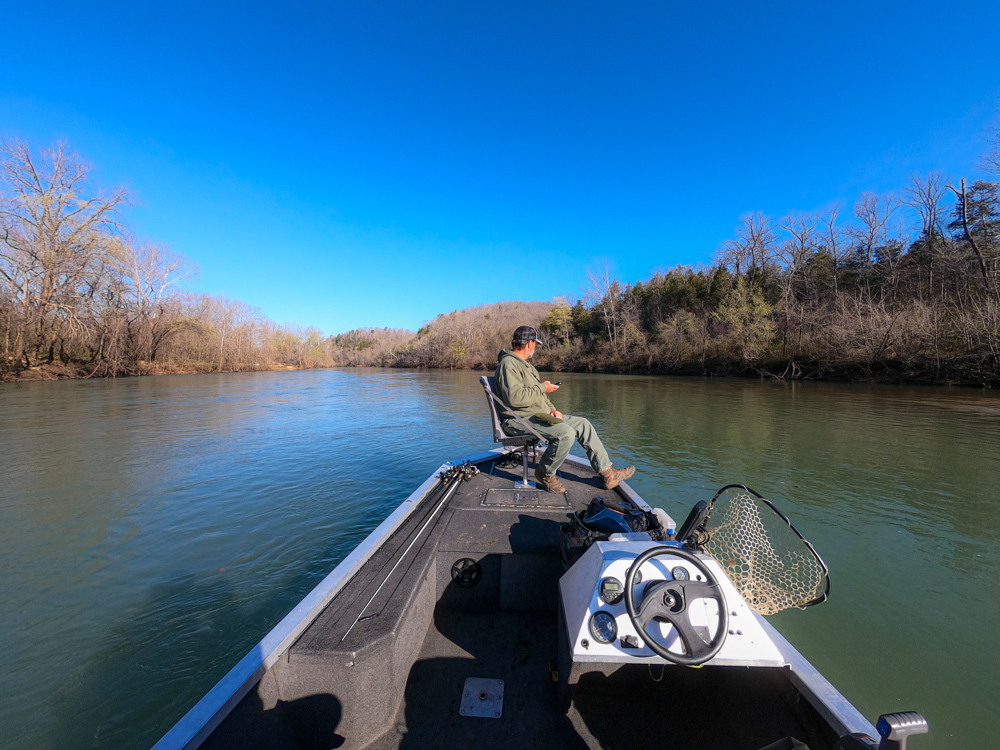 In an email from Scott Pauley, Scott said that Bill knows just about every eddy on the river and even knows what fish are in what eddy. Fisherman are famous for their exaggeration, and that might be another one, but I found the fact that Bill was an expert guide no tall tale. 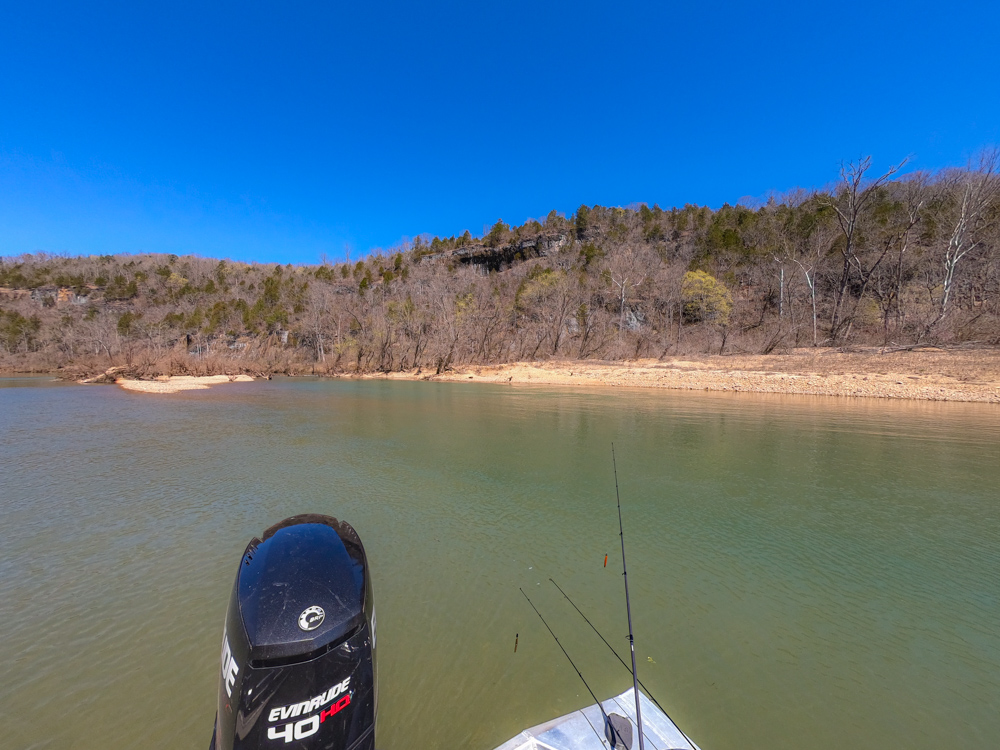 Bill supplies all the gear and even lunch, so there is no need to bring much of anything except yourself and the proper clothing. He even offered a few extra layers for me as he knew it was a cold day. We boarded his bass boat and proceeded to motor on the down the river to the first fishing holes. 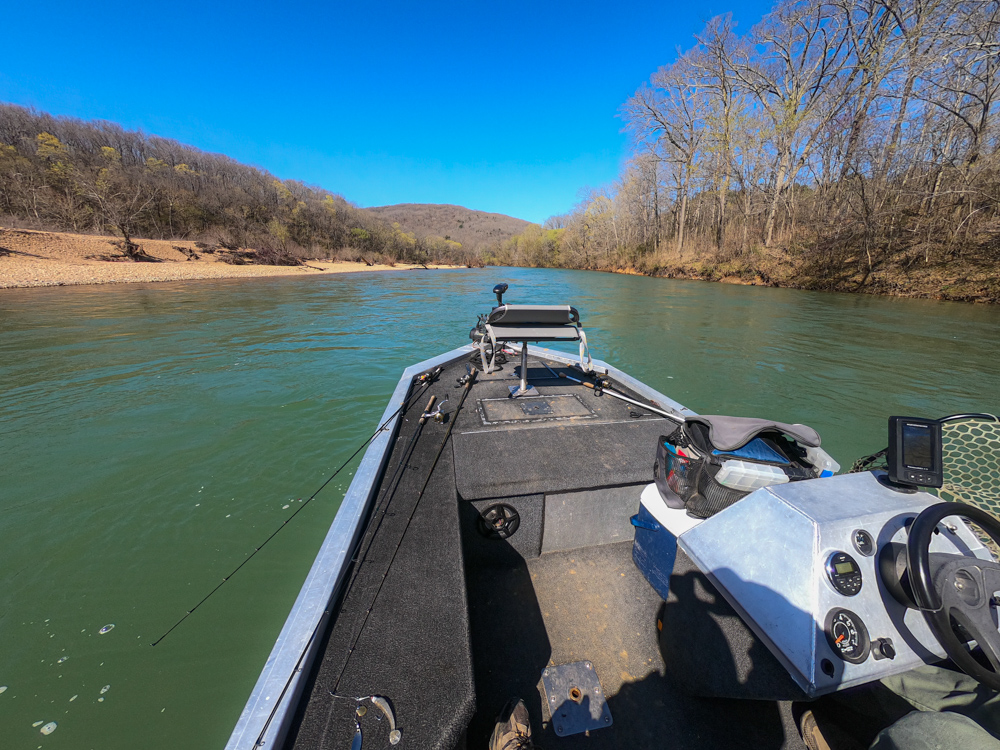 I had four fishing poles to choose from, each with a different lure. All of the equipment was top of the line. I mainly used a jig with a pointed head and a short orange plastic tail. It was like a Mister Twister tail except it did not have an hooked tail. The tail was short and did not make any movement. Bill said that the technique was to cast over the eddy to the shore and reel in slowly and jig off the bottom. 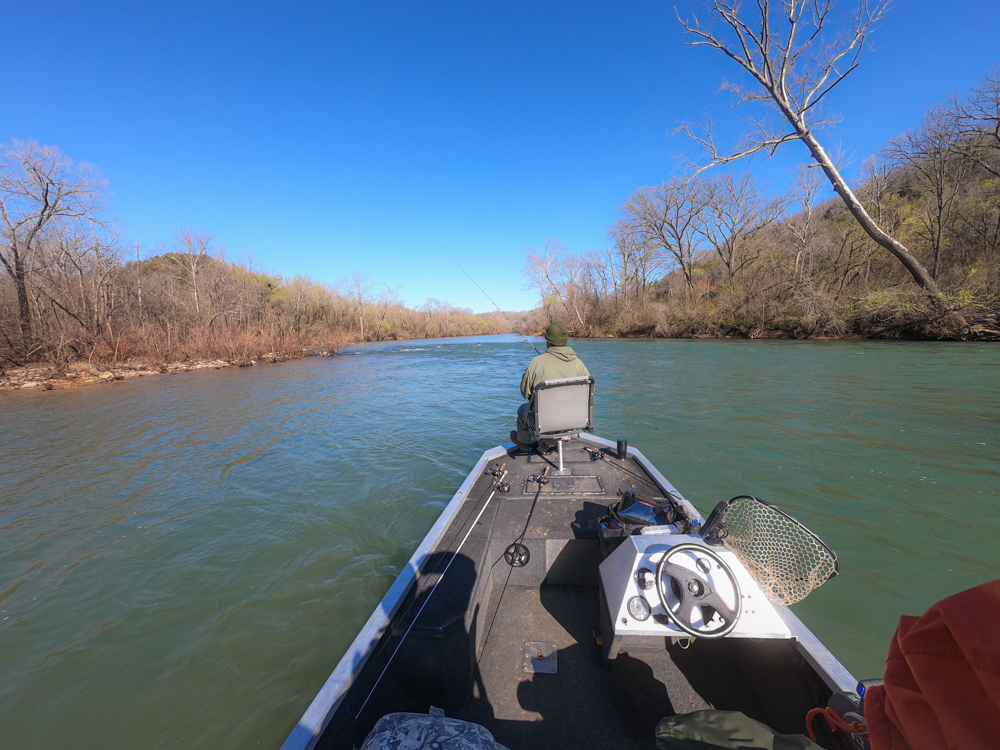 Gorgeous although cold day on the Current River

I cast exactly like he said and began to reel in slowly, and then bam. Right away on the first cast I had a nice little smallmouth. Smallmouth are known for their fight, so even a ten or twelve inch fish can provide a few minutes of excitement. I live in Illinois where the reality of getting skunked is always a possibility, so anytime I catch a fish, I am happy. 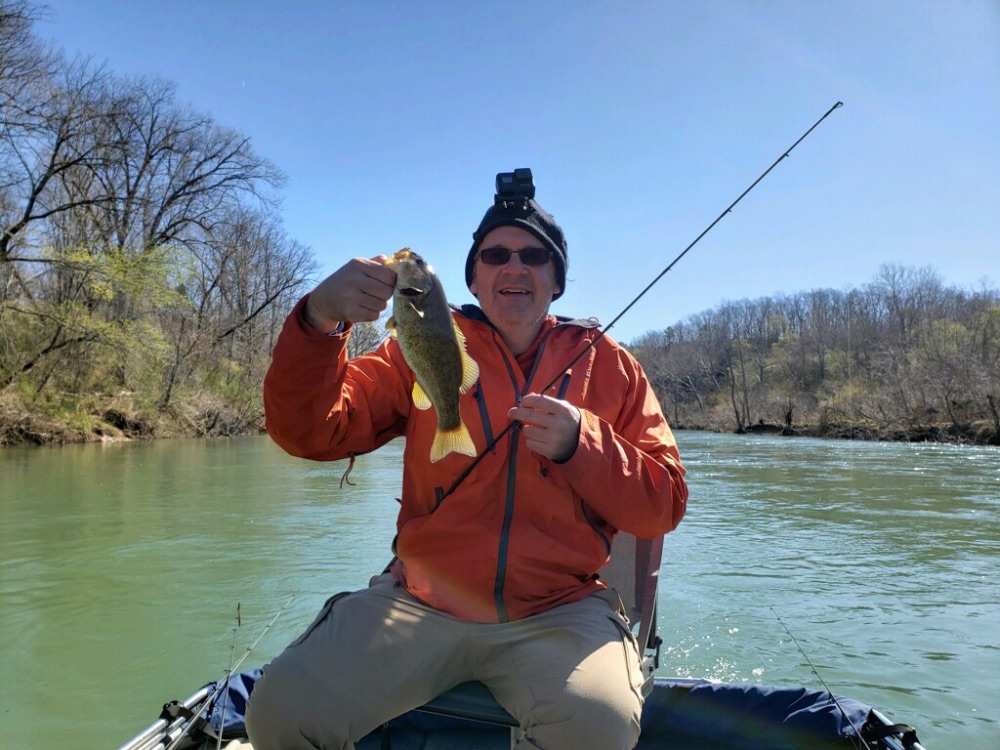 With the specter of a zero fish day released from my shoulder, I relaxed and concentrated on just enjoying the moment. Getting skunked I think is pretty much impossible from what I experienced on this day on the Current River. Despite the cold, it was pretty easy to delight in the fact that I was casting and catching fish on the first ever nationally protected river. I smiled knowing this was a bucket list experience happening right now.

Since it was just me in the boat, Bill also fished in between manipulating the motor and the trolling motor. He said when he has two guests, he does not fish as he sits in the middle and takes care of the needs of his clients. After catching a few small ones, I hooked on to a fish with a little more strength. This one would be my biggest of the day and required a photo. 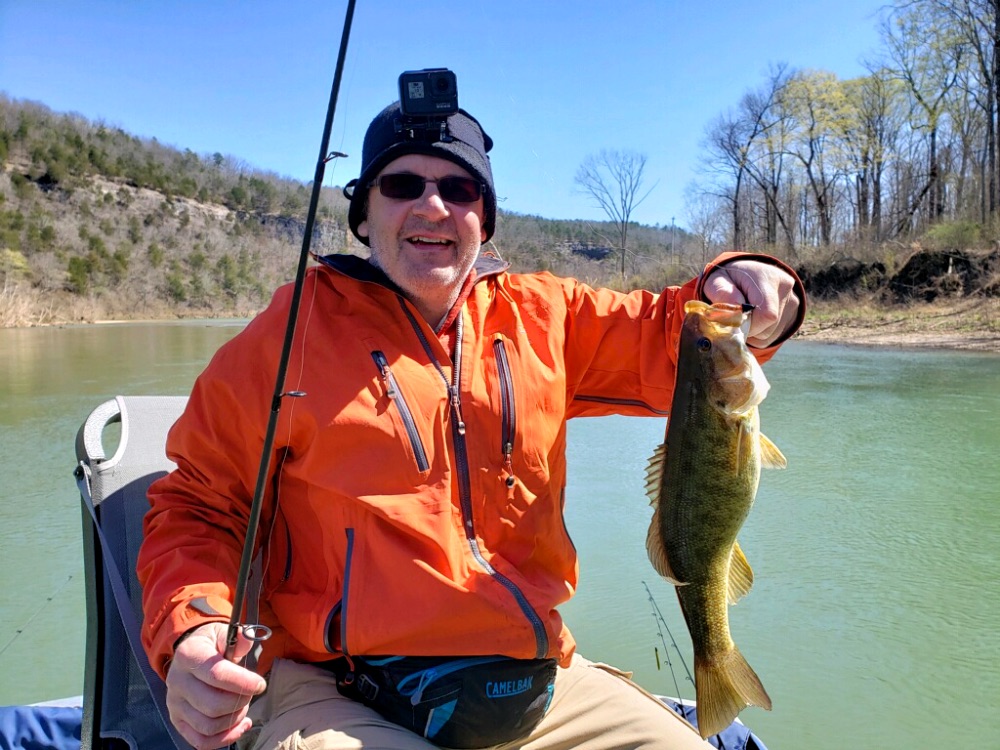 We floated downstream and continued to fish the eddies for smallmouth. At every eddy, Bill would make a comment like “There are some nice ones in this eddy,” or “last week we got a three pounder here.” He did not mention any fish by name, but I was beginning to think perhaps that Scott was right, and he did know some individual fish by their eddy location.

We caught mainly smallmouth with a few largemouth bass

Primarily, we caught smallmouth bass, but we did catch a couple of largemouth. Bill mentioned there was a lake upriver and sometimes flooding caused a few largemouth to make it into the Current. There are also goggle eye fish also known as rock bass. We did not catch one, but I had one on my line, but he escaped. 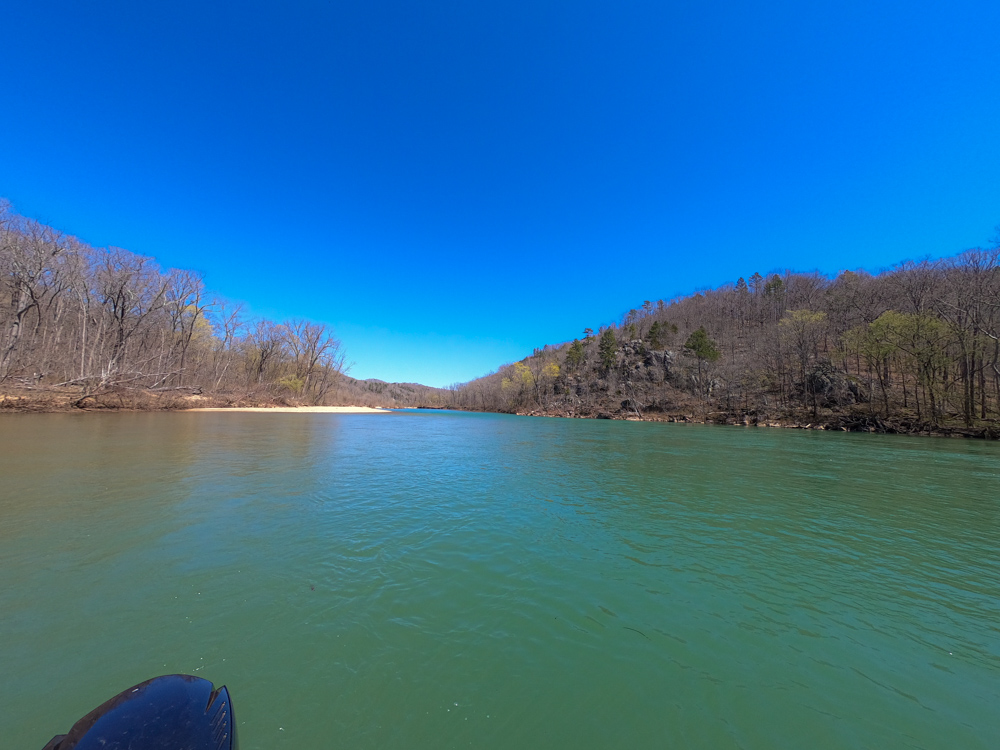 Fishing the Current River is definitely a bucket list adventure

Missouri waters are a national gem for canoeing and fishing

The fishing trip lasted for at least six hours, so I definitely had a full day. Between the two of us, we probably caught over 50 fish. They were all released back into the river and waiting for you.

Bill brings out clients for half day and full day fishing adventures. You even get a sweet hat out of the day. I highly recommend a day out with Bill Smith on the Current River. If you have paddled the river many times like I have and have been curious how the fishing is, the best way to find out is book a trip with Bill. 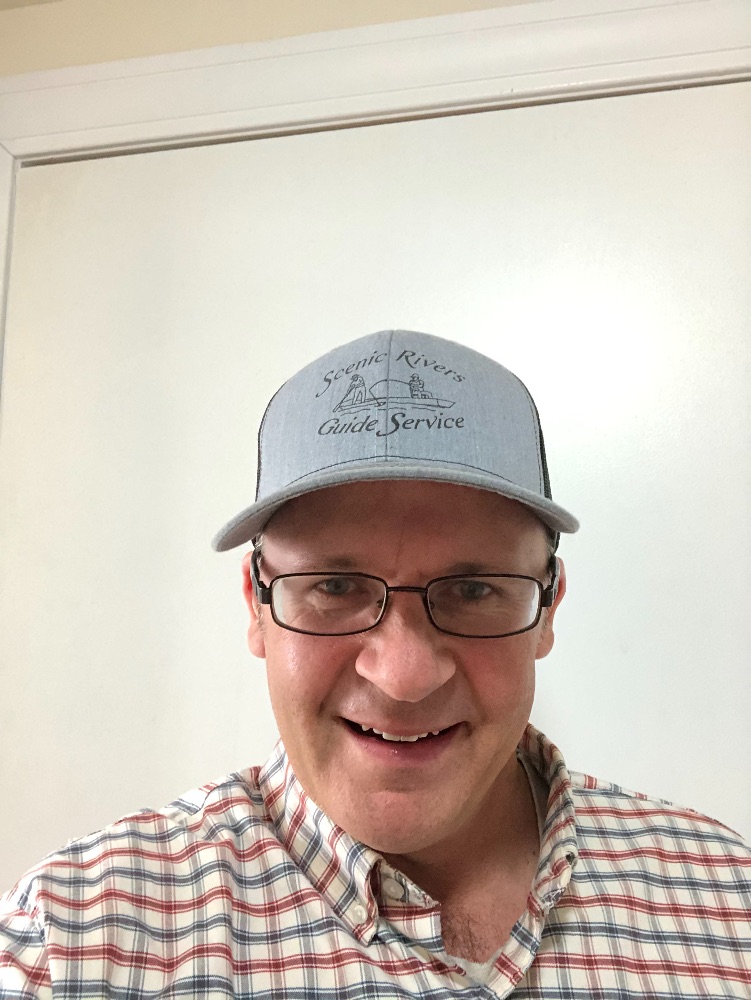 I got in my car and headed north delighted with the fact that I spent a wonderful day on one of the prettiest rivers in the country and caught plenty of fish. I began to think that what Scott said about Missouri fish