The Friends of the Chicago River volunteer guides gather every summer for a Wisconsin River canoe trip. We always enjoy the experience so much that this year, we decided to get together in the fall for some Wisconsin Dells fall canoeing. My friend Marvin had a friend with a cabin at one of the campgrounds. We stayed there for two nights. 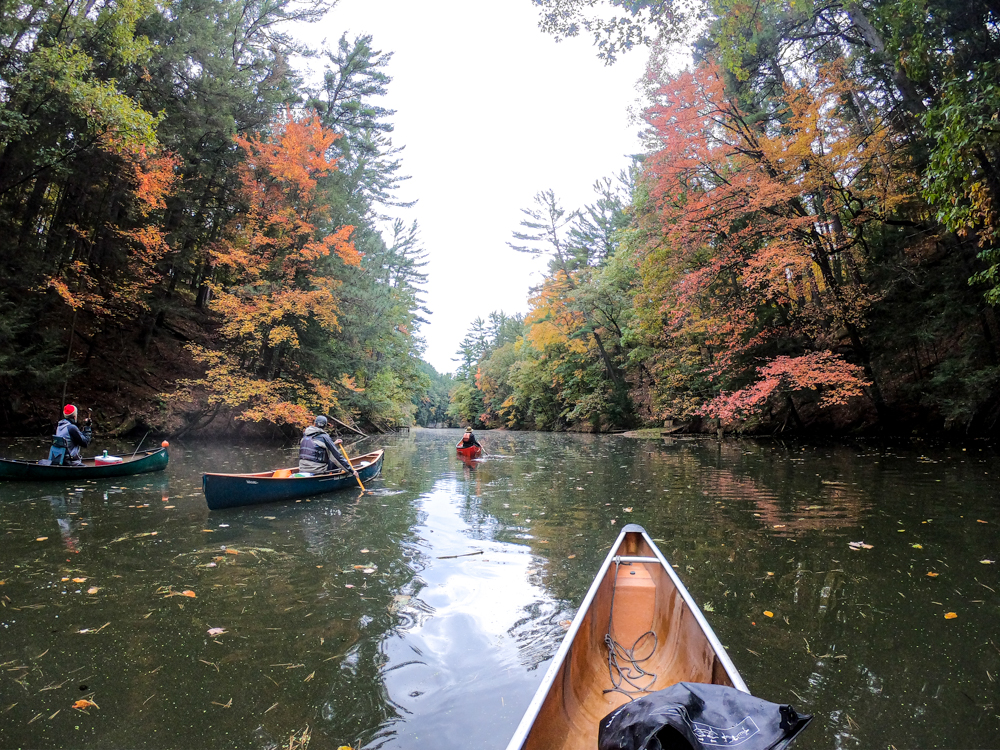 I often come up on Friday nights to Wisconsin, but I rarely get to take part in the age old tradition of the Wisconsin fish fry Friday night. I am usually driving and only have time to stop for a Subway or gas station food. This trip, I got up around 7:30 p.m., and my friends graciously waited for my arrival to go out for dinner. We dined at the River’s Edge Pub and Grill. The ambiance of this place is awesome. The highlight being a huge fresh water fish aquarium with some pretty nice lunkers. 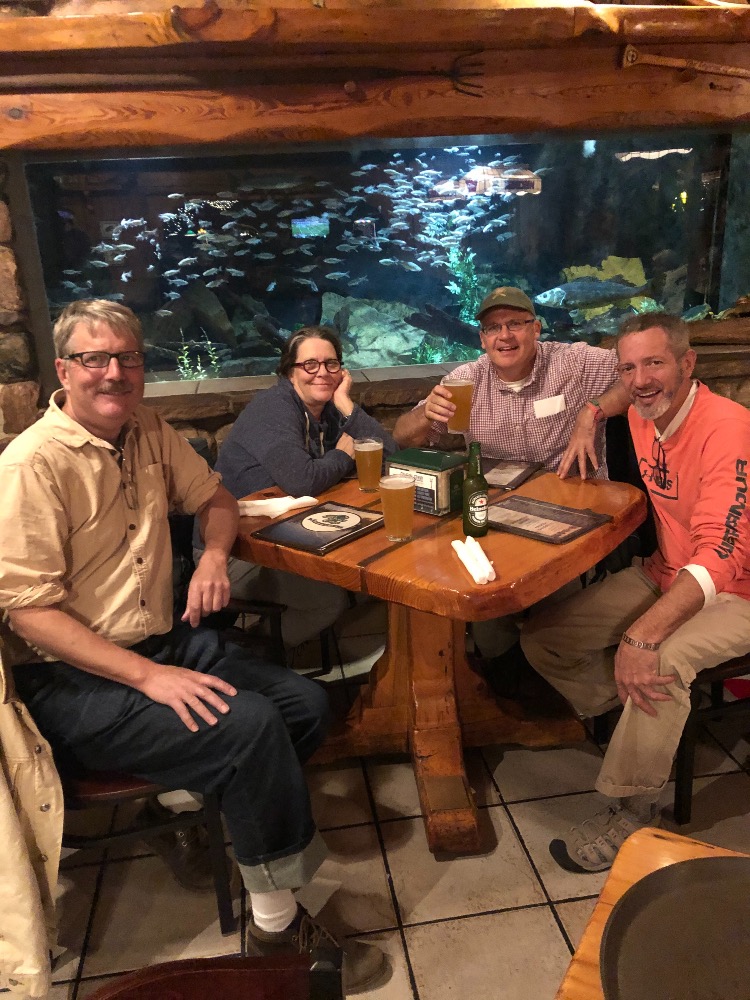 The first day of canoeing was on Mirror Lake State Park. The Wisconsin Dells is known for family fun and not so much for outdoor adventure; however, there are many wonderful state parks surrounding the Dells. Buckhorn State Park, Mirror Lake, and Devil’s Lake is not too far. The Wisconsin River winds its way through the area, and although the upper section is crowded with tour boats, the lower section is much quieter. If you look at the area on Google maps, you will see a lot of green areas, so there is a lot to do outdoor wise in the area despite the reputation. 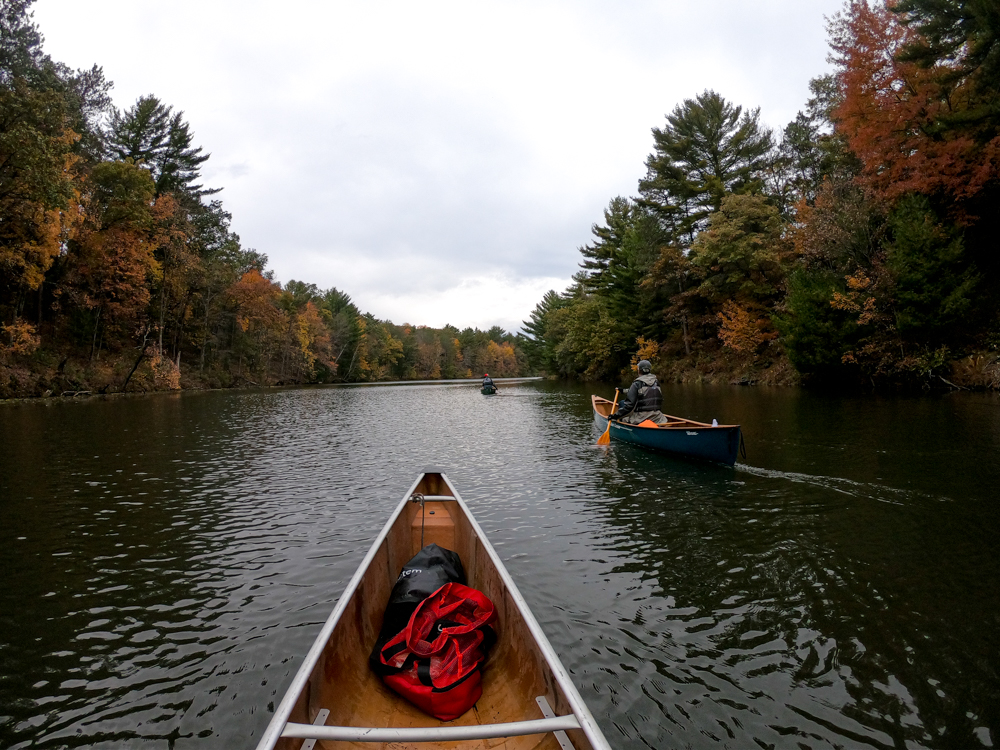 We put in on a little inlet and paddled out into the bigger lake. We had the lake practically to ourselves. There were a few other boats out on the water. The lake is not huge, but it is big enough to feel like you have the lake to yourself when only a few other people are paddling it. The colors were just about perfect, but Mirror Lake is mainly pine, so it was not spectacular. Even though it was not an amazing array of oranges and reds everywhere, the mixture of the pine with the fall colors was pleasant. 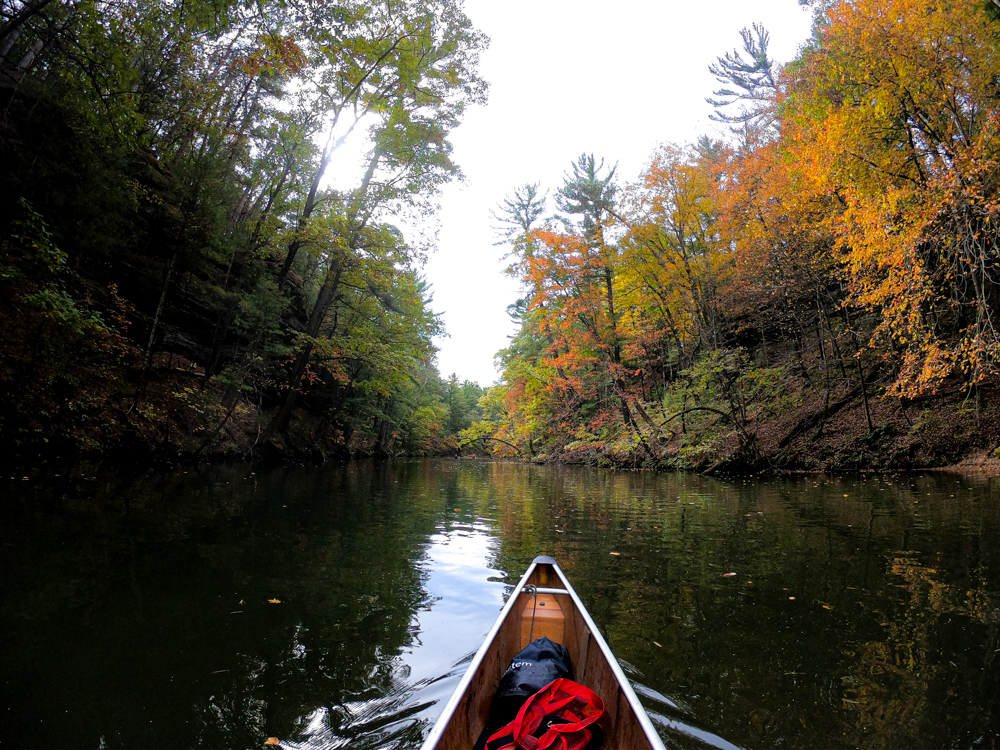 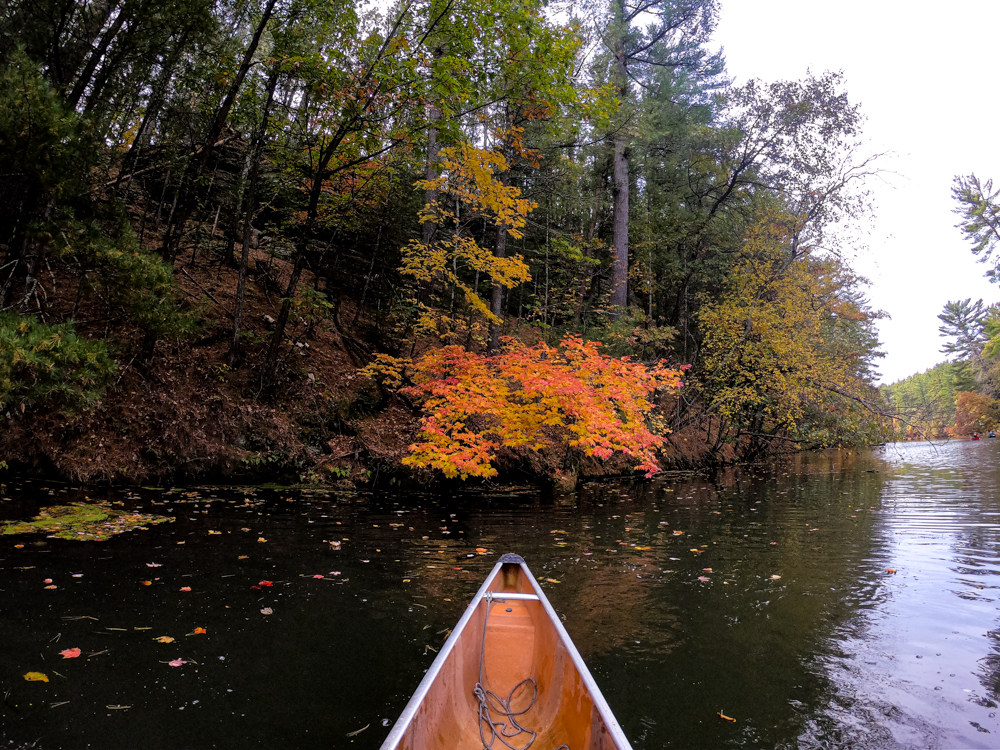 Eagles, owls, and a red fox

Being the only paddlers and boaters on the water has its advantages. As we paddled under the interstate, there was a cottage along the lake with a pier. On the shore next to the pier was a tree with what looked like an owl in it. I thought it was one of those fake owls because it was in a tree where people were dwelling and it was the middle of the day. I was just behind the other three canoes, and I pointed and got their attention and asked “is that a real owl or a fake owl?” Just as I said that, I could see the owl shift in the tree, so I knew it was real. It eventually took off, and flew right over us. It was a great horned owl. 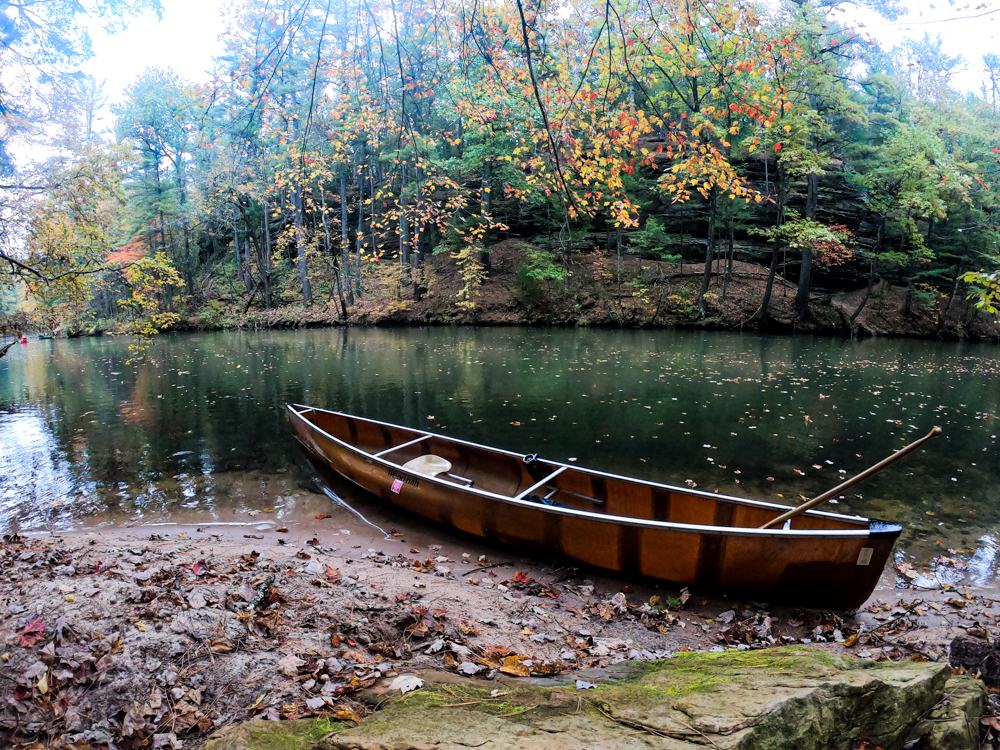 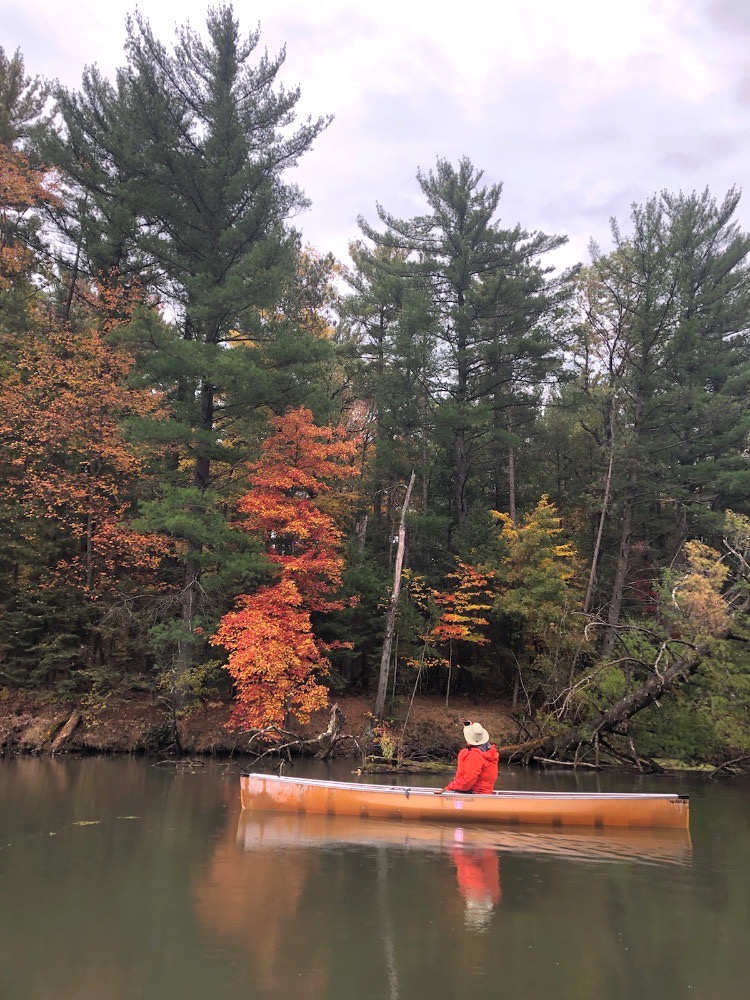 Me and my canoe on Mirror Lake State Park – Thank you Marvin for the photo.

We paddled up another inlet and saw some bald eagles. Marvin had an app that produces bird noises, and he played the bald eagle sounds. It seemed to perk the real eagles’ interest. On the way back, I took the lead. I just purchased a new Wenonah Sundowner canoe. I bought it used from a friend. It is really fast and sleek. I took off from the rest of the group trying out its speed. By another cottage by the lake I heard some movement and a white spot in the woods. It turned out to be a red fox, and he ran up the hill and then looked at me before taking off in the woods. Seeing Eagles, an owl, and a red fox makes for a great day of wildlife viewing.

At one point coming back it was especially peaceful. There was hardly any wind although a light rain began to come down. This rain began to knock some of the leaves on the trees down. They slowly but steadily came off the trees and helicoptered down on to the water. The water began to look like a carpet of colorful leaves. It was really beautiful. 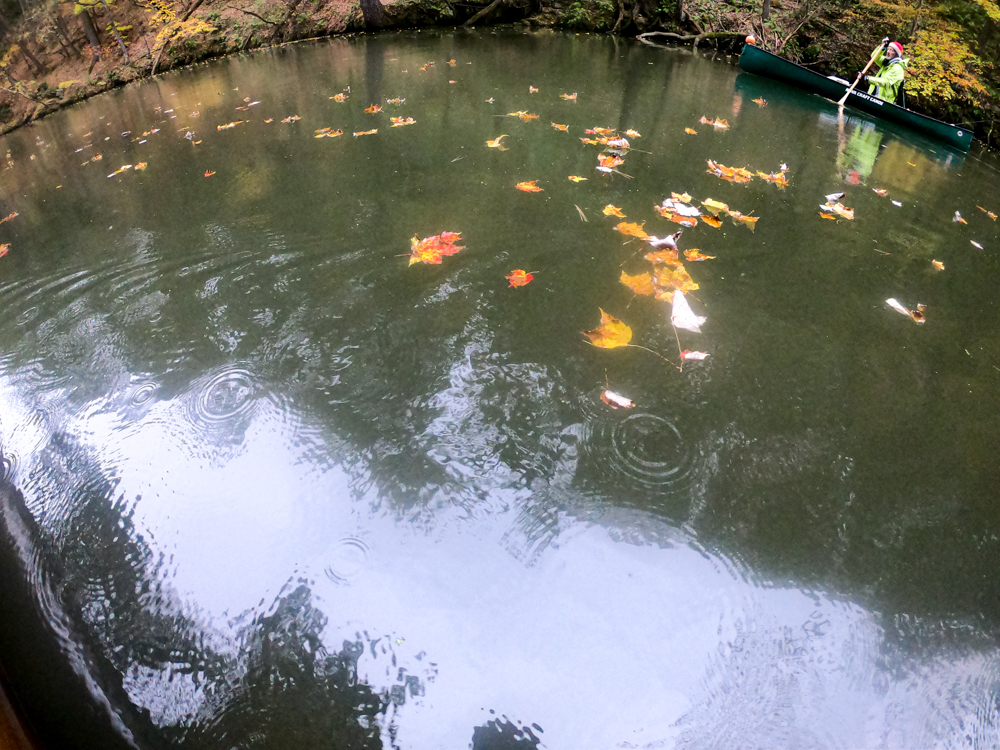 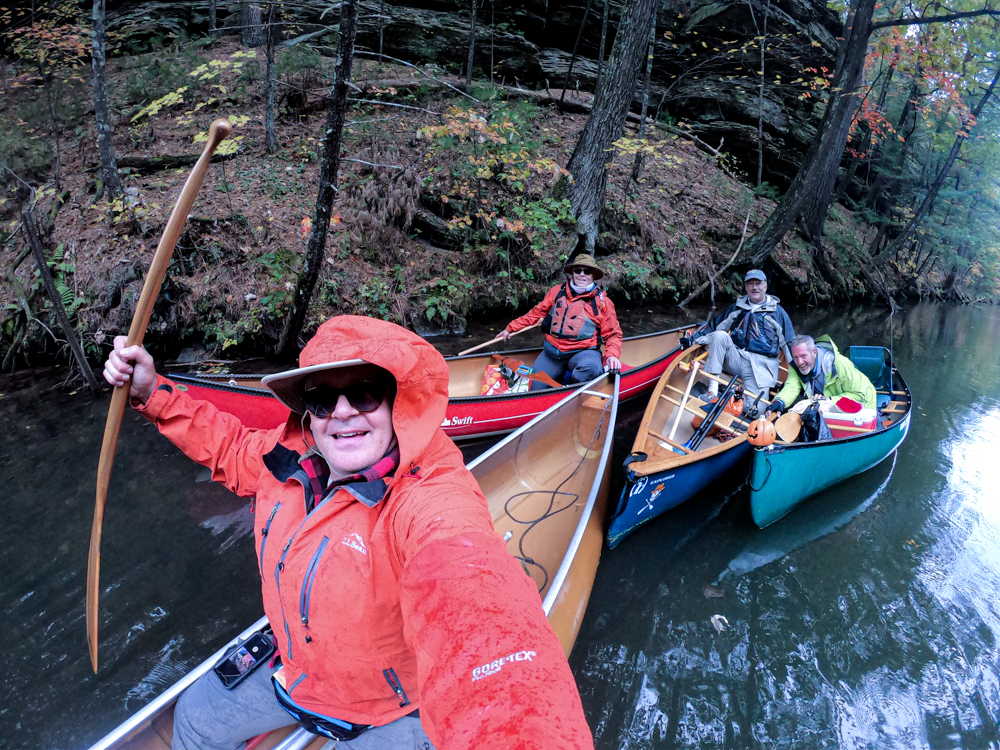 On day two, we did a small stretch of the Lower Dells on the Wisconsin River. We put in below the dam and headed south. We first had to plow through layers of foam by the dam. Once freed, we headed south. The first day we all paddled solo canoes, but today we took two tandem canoes. Besides Marvin, fellow guides Russ and Deb were along and today we had two guests from Madison. Kurt, who I have padded with on Bull Moose Patrol trips brought a friend. 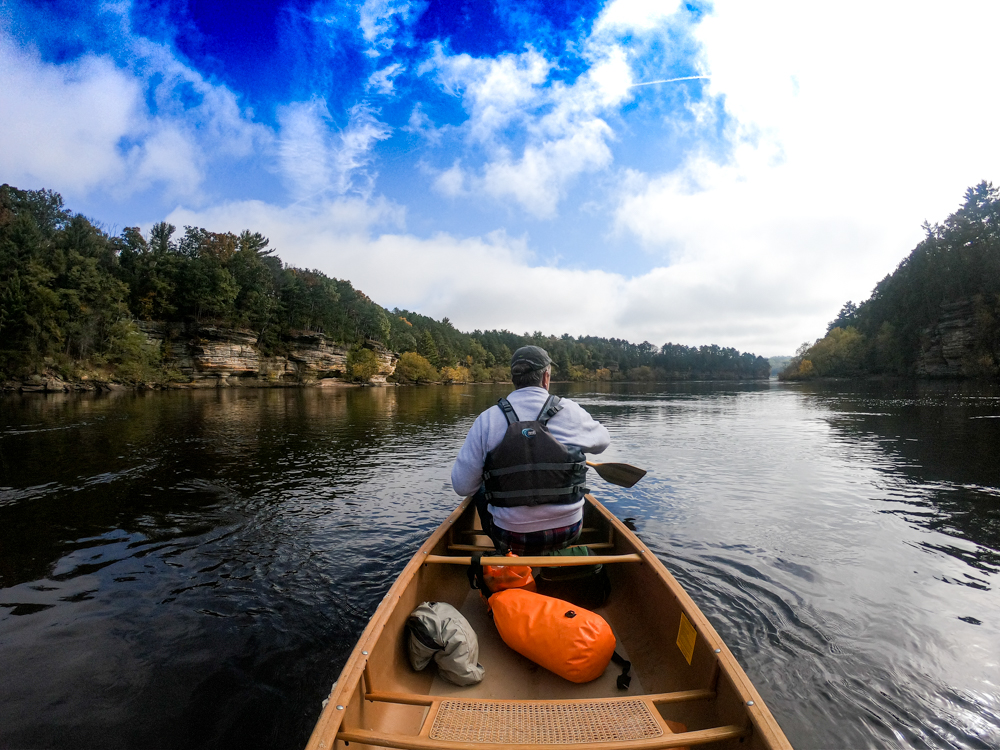 Gorgeous day broke out on the Wisconsin River

The first stretch of the Lower Dells were similar in character to the upper with beautiful sandstone cliffs along the river. We passed a sign that said no boats past this point. I think this was in reference to rented motor boats. This was also the section where the tour boats turn around and the picturesque cliffs disappear. At this point, so did the people. We only saw one kayaker past this point and the river looked like the Wisconsin River we were used to from paddling the lower section. The bluffs flattened out and sandbars began to appear. 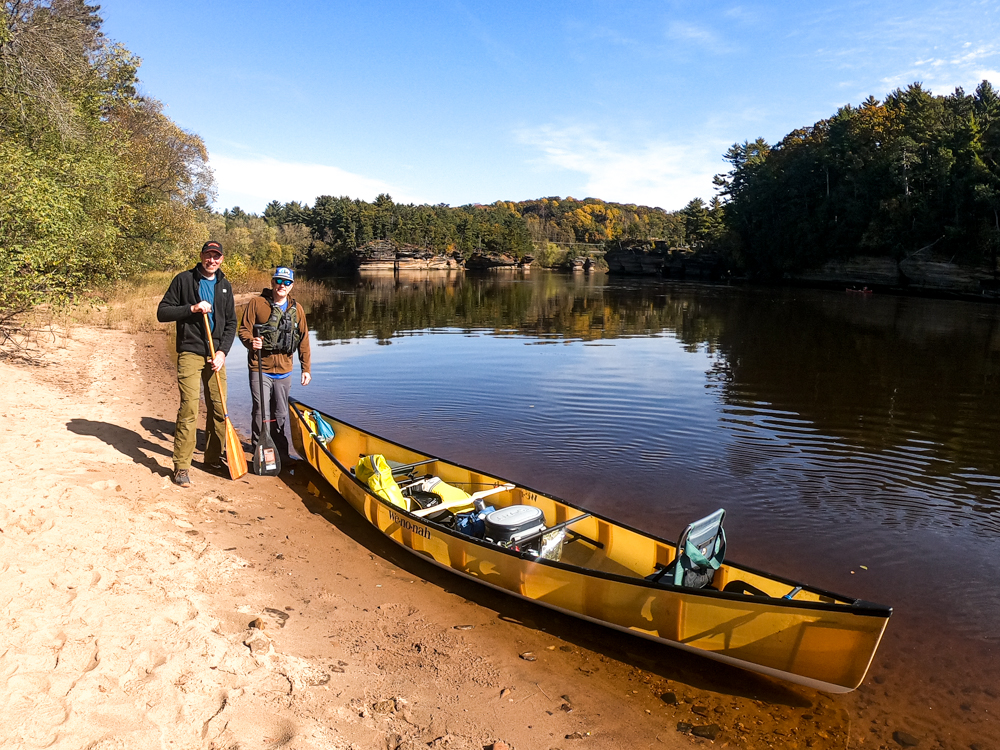 Kurt and his friend join us on a Wisconsin River sandbar

We only paddled a very short section. Some of the people in our group wanted to leave early being a Sunday. Kurt and his friend powered on to do a longer stretch. It was a gorgeous day, so we made several breaks on the sandbars and enjoyed one of the last days of being outside in sunny warm weather. 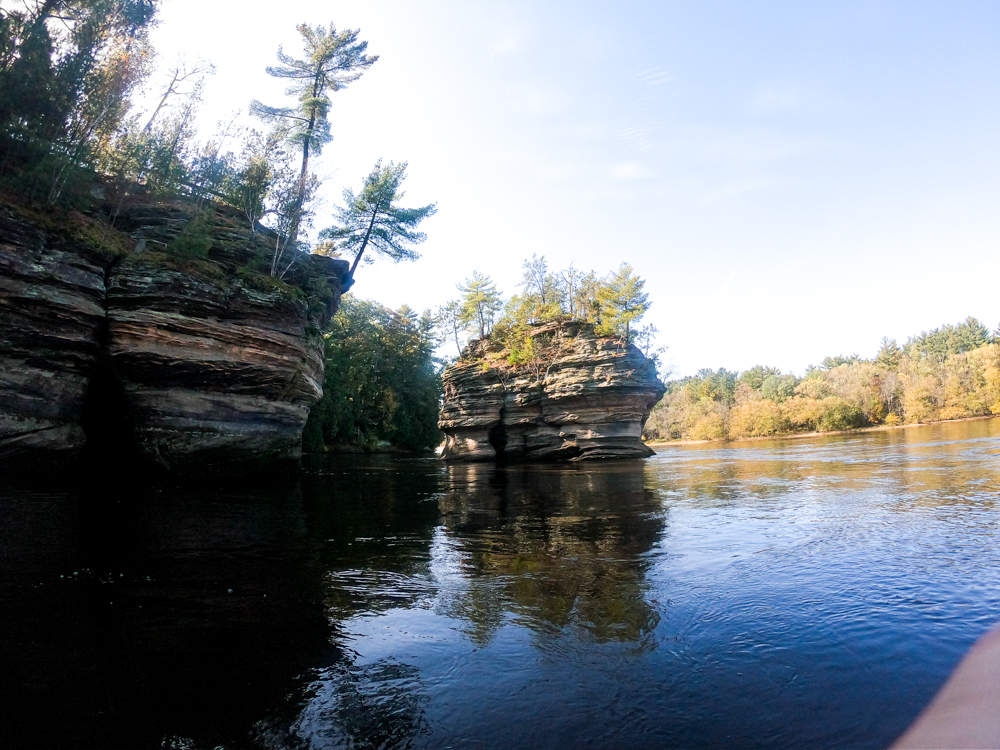 While hanging out on the sandbar, we began to notice an odd phenomena. We kept seeing strands of white spider webs floating through the area. The more we looked, the more we saw. The sky was full of these white wisps of web. Many of the strands would stick on the bow or stern of the canoe. We then discovered that some of these floating webs had small spiders attached. I have heard of this happening before, but never witnessed it. The Wisconsin River never ceases to amaze. 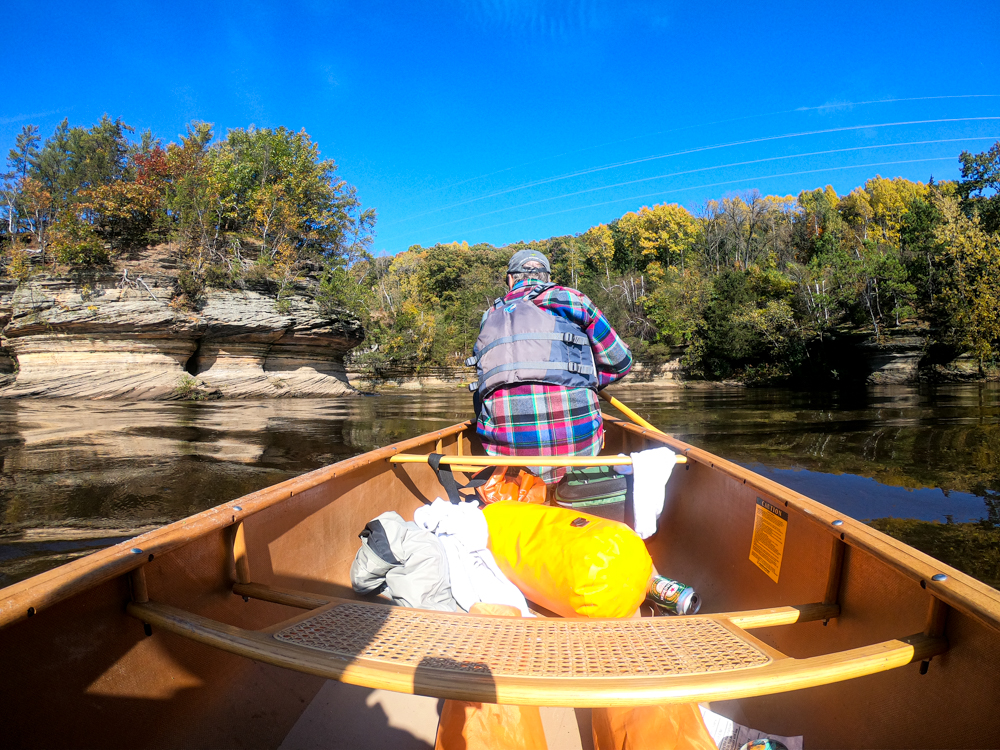 The next morning it was back to Chicago. I was grateful for this last canoe weekend getaway since I missed a whole month of the summer when I was in Southeast Asia. We agreed this trip is something we should make a new tradition. I love it when new traditions are instituted, even more so when they revolve around good friends, canoeing, and Wisconsin. 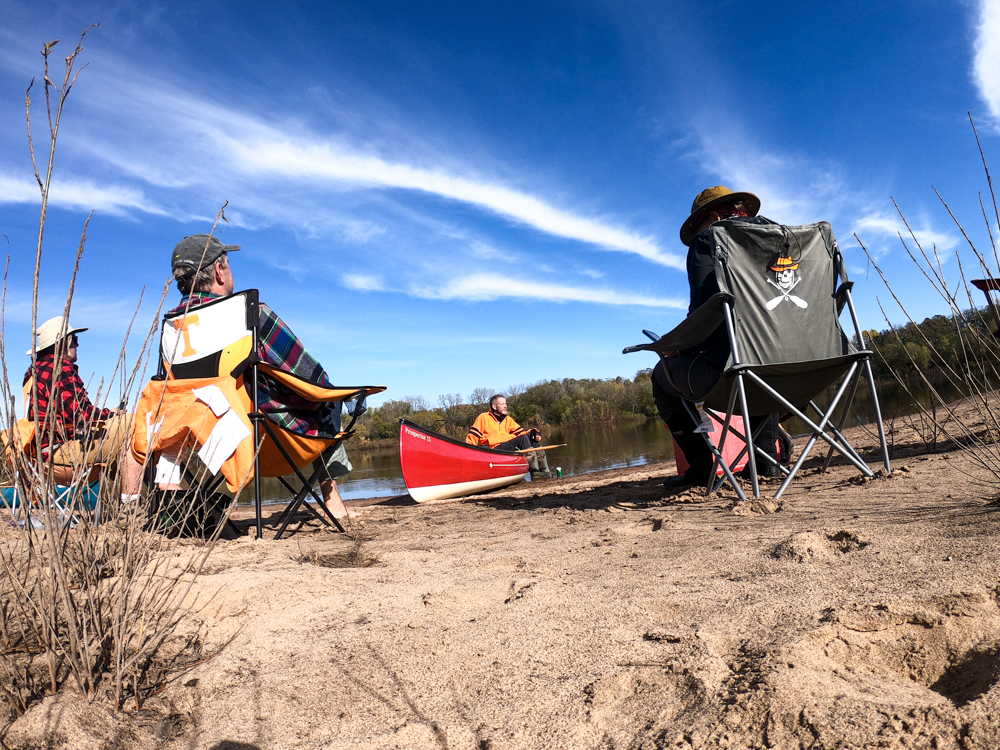