Neshota County Park is a plan A plan B

Sometimes when embarking on adventure, you do not know where you will end up until the last moment. Most adventures are planned out sometimes months in advance, but sometimes it is necessary to alter plans. This is most often due to weather, but other reasons can take place causing a change. I traveled to Colombia several years ago and found out that Tayronna National Park closed for the whole month I planned on visiting. A winter snow storm caused me to change plans and ski at Neshota County Park near Green Bay. Plan B turned out to be a sufficient plan A. 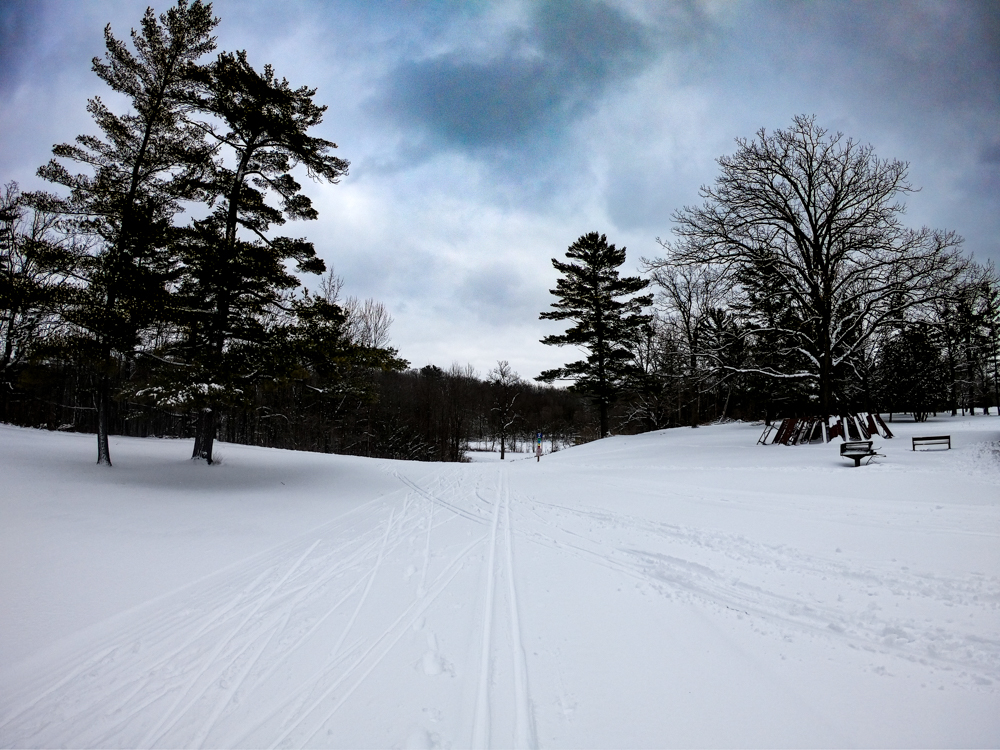 My plan A was to ski the Lakewood cross-country ski trails in Lakewood, Wisconsin. I knew a winter snowstorm was coming, but I hoped to beat it on Friday. I packed up my car in the morning and left directly after school. Skies were cloudy as school let out, and as I left the city there was no snow. Unfortunately, as soon as I hit the suburbs, the snow started to fall. It did not stop until the next morning. It took me almost five hours to reach Green Bay. My GPS initially said it would only take three hours. 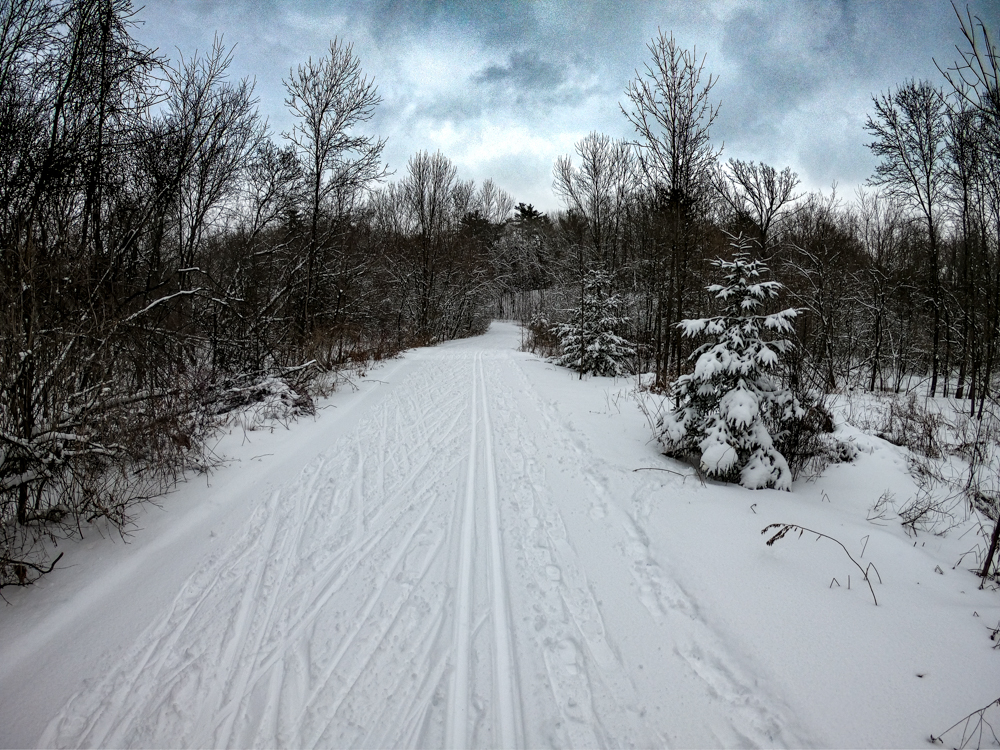 I woke up the next morning with the snow continuing to fall. After the difficult drive the night before, I was hesitant to drive another 1.5 hours to Lakewood. The unplowed county roads were not worth the risk. Plus, the ski trails at Lakewood would most likely not be groomed yet. I needed a closer plan B. I searched the net and settled on Neshota County Park only 15 miles south of my current location in Brown County, Wisconsin. 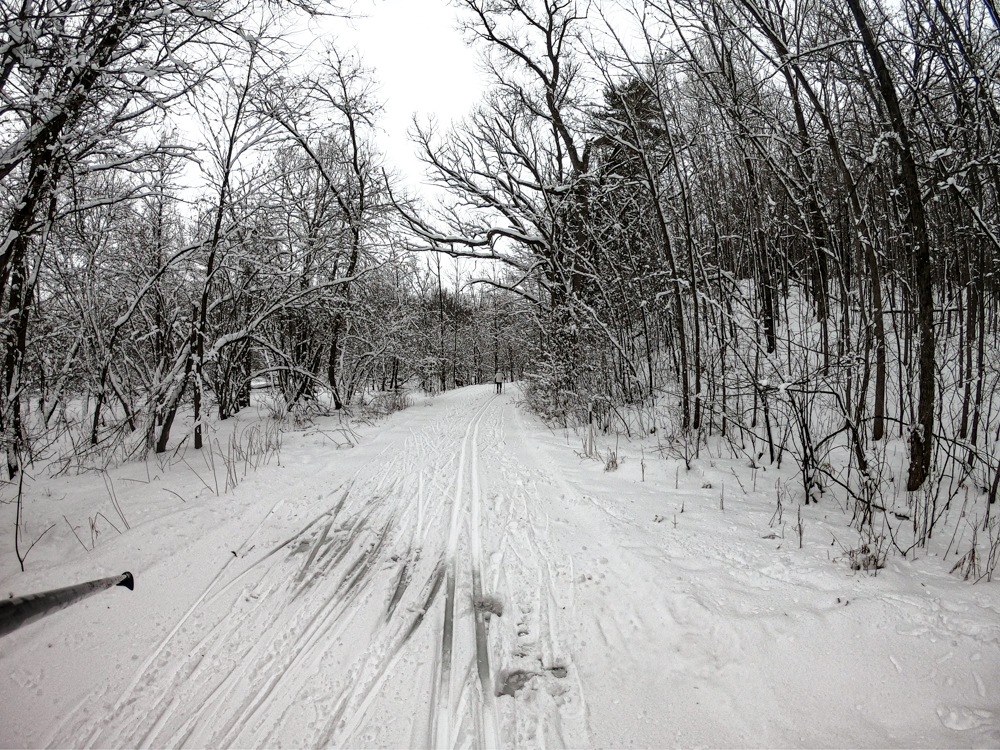 A little ice on this section of the trail, but the rest of the course was in good shape

Plan B Neshota County Park was much closer

Still fatigued from the difficult drive the night before, I left a little late in the afternoon. The snow finally stopped around noon. I  started driving around 1 p.m. I arrived at Neshota and got on the trail by about 2 p.m. The trail was packed but not groomed. Under the circumstances, I was pleased that it was at least packed. Since I got a late start skiing, many skiers had already been on the trail, so a sufficient classic track was set by other skiers. It was not perfect, but it would do.

Creek bed along the trail at the beginning

I paid my $5.00 usage fee and dropped it in the envelope. After consulting with the map, I immediately decided to try the Oak Hill Trail. It was listed as advanced and was 2.8 miles long with a couple of steep hills noted on the map. I skied down a short hill from the parking lot and entered the forest and the trail system. The trail started off following a small creek. The forest was a mixture of hardwood and pine with a nice amount of birch trees. As you can imagine, the forest was gorgeous after the fresh snowfall. A vicious wind greeted me at the trailhead, but most of the trail ran though the woods, so the forest afforded protection from the gale. 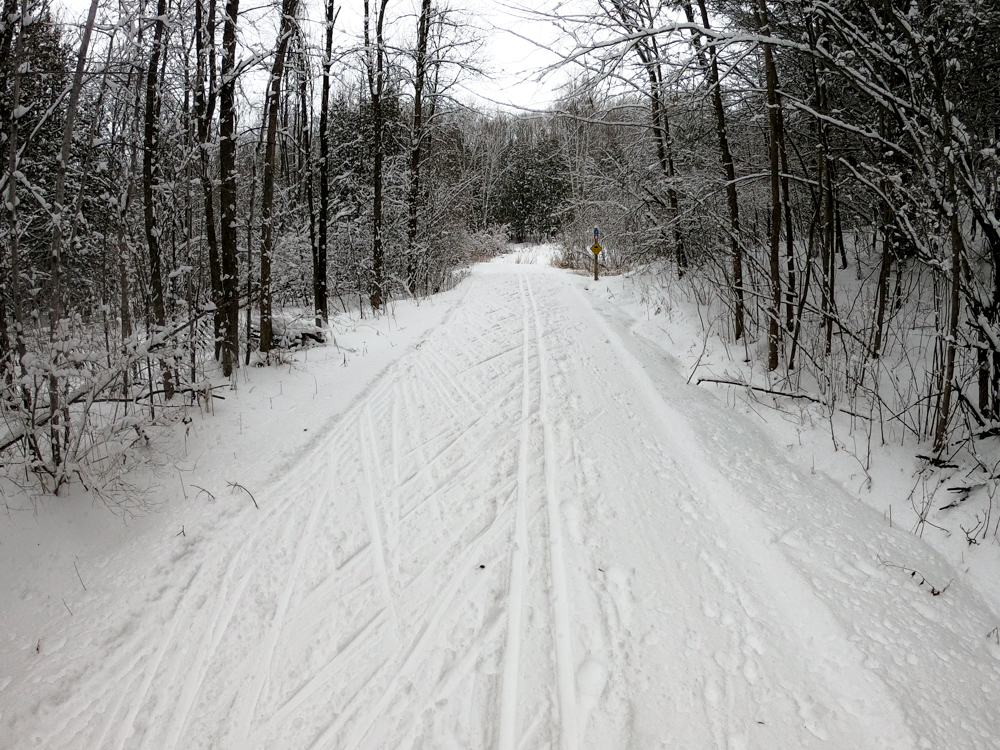 The first part of the trail was relatively flat. Then the trail branched off and started to climb a hill. I assume the hill was Oak Hill. The climb was quite vigorous and took about five to ten minutes to trudge up. Once at the top, it was straight down going around a corner and then straight down. At the bottom of the hill, the trail goes over a creek and narrows. It is necessary to control speed unless you want to end up in the creek. The trail then climbs up a smaller hill and back down the smaller hill. 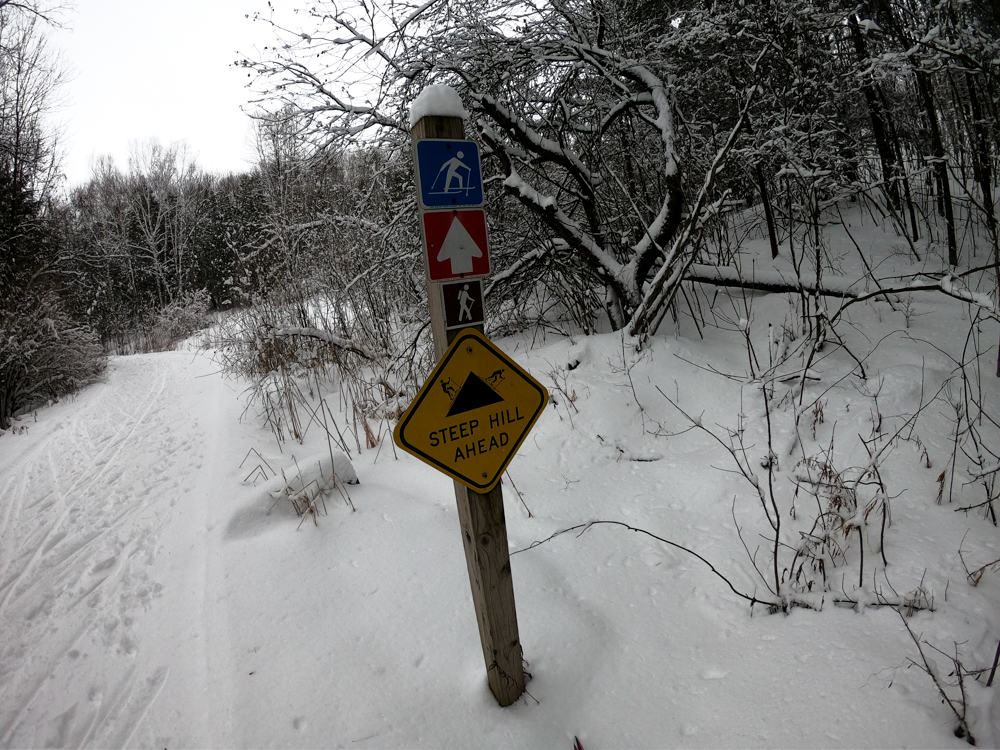 Steep hill warning before climbing on the Oak Hill Trail

Once the large and smaller hill are conquered, the trail reverts back to a flat course until the very end. At the end the trail turns left and goes up the small hill back to the start. I felt this trail was just perfect, so I had no interest in trying the other trails, since I assumed they did not have much in terms of terrain to climb up and down. I skied the Oak Hill Trail four times until it was pitch dark. 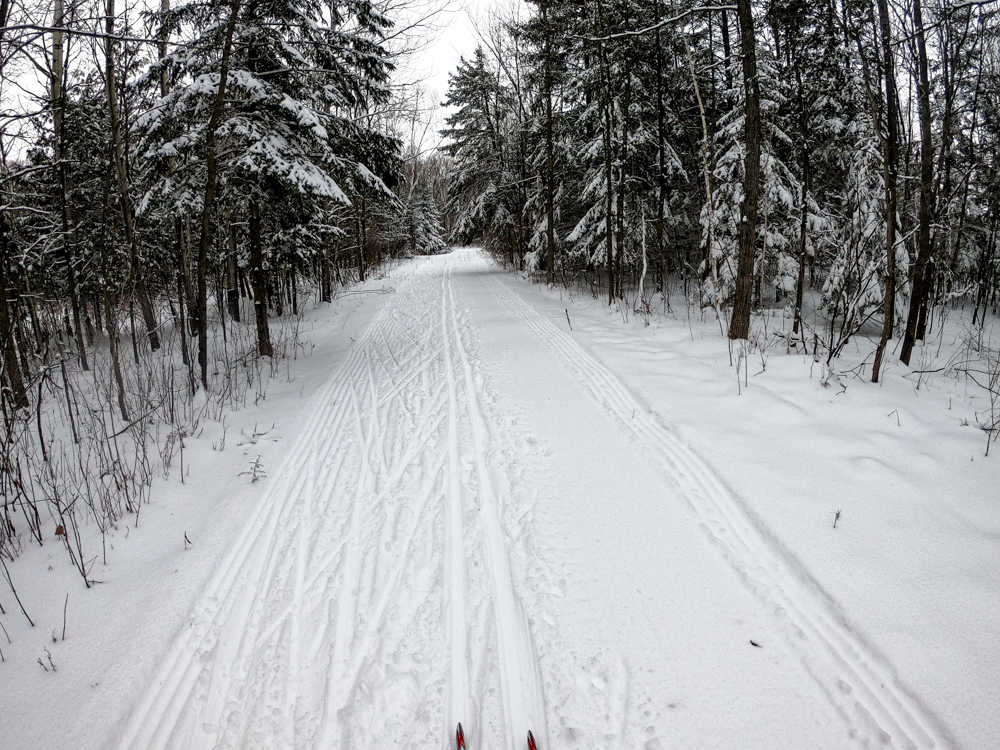 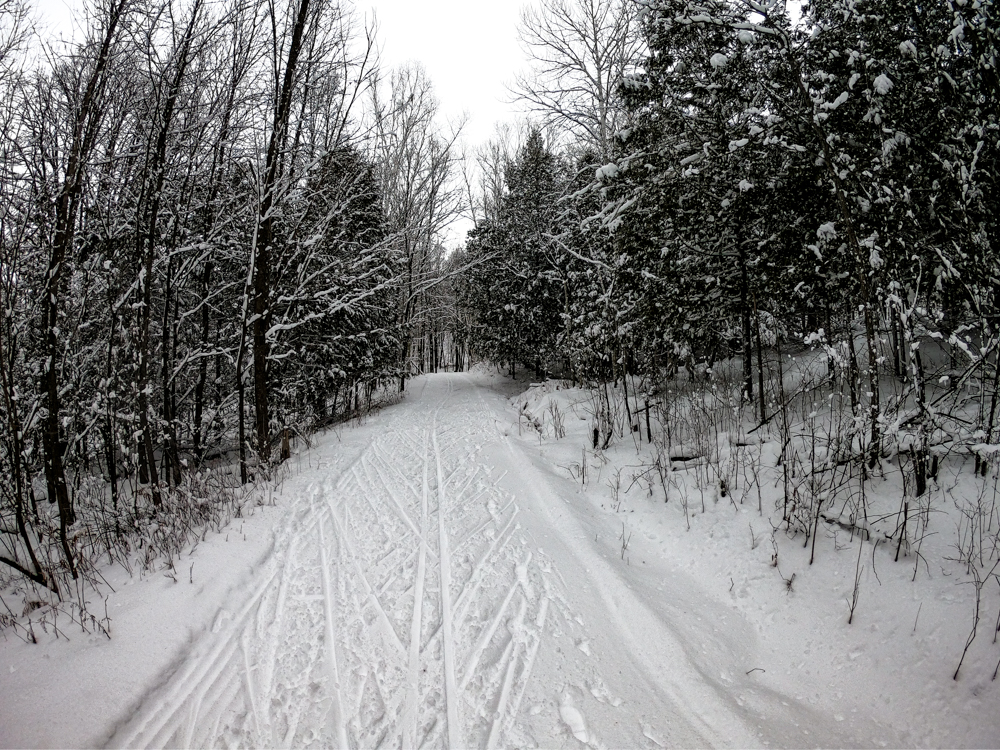 A friend on Facebook posted a picture of the trails a few days later and they were perfectly groomed for both skate and classic, so it looks like they do a great job of keeping the course groomed. It takes time for groomers to do their work after a snowstorm. It is ironic that the weather event we need to do the sport can sometimes make the sport more difficult. 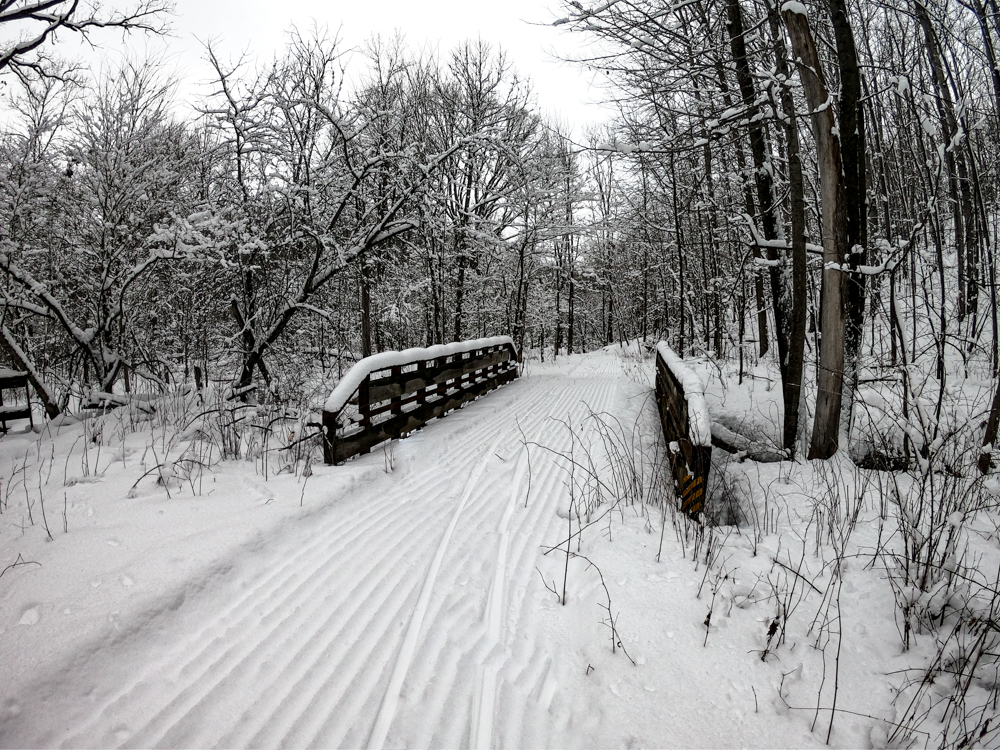 Beautiful winter scene off just off the Oak Hill Trail

Hit Lakewood the next day

The next day I made it over to Lakewood, and it was a good thing I did not try and ski this course the day before. I think I was the first person on the pristinely groomed trail, so I believe the groomer probably did this portion the night before. Only half the trail was groomed. If I came the day before, I am sure I would have been presented with six inches of ungroomed snow, which would have made for backcountry like conditions. I am glad that plan B brought me to Neshota County Park. It was a B in my choice for the day, but it gets an A for the experience.

For more information on Neshota County Park, check out the Brown County website.