Moose madness on the Allagash River

Growing up, I was fortunate to go on many Boundary Waters Area and Quetico canoe trips with my parents. Later in life, I went on several Quetico fishing trips with good friends. On these trips, we were fortunate to see moose frequently. Moose madness was alive and well in Canada and Minnesota. 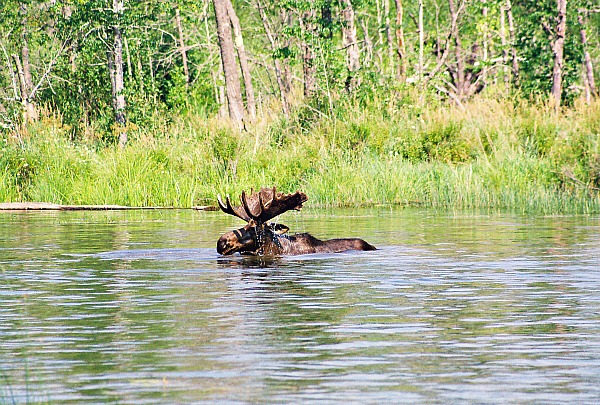 Moose madness on the decline in Minnesota and Ontario, Canada

About ten years ago, the moose population in Minnesota and Canada went into serious decline. It went from over 10,000 to less than 2,000. The decline was immediately felt on subsequent trips with my dad. We did two Quetico trips in 2011 and 2012 through the Falls Chain. During a weeklong trip we used to see four to six moose on a trip like this. On these two trips, we did not see one. I came up for a week of skiing a few years later with the same result. 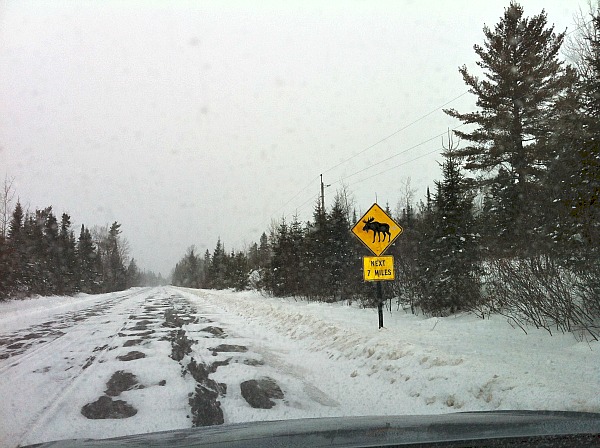 No moose crossing for me in over a decade

This was quite upsetting. I sure missed those big lugs. On top of this, I have been to Rocky Mountain National Park, North Dakota, North Bay, Ontario, and Vail, Colorado without seeing a moose.  I was beginning to think someone put a moose curse on me. 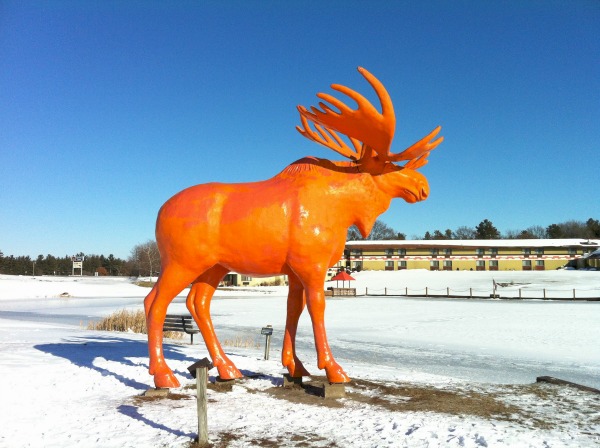 In order to stop the lack of moose streak, I signed up for Bull Moose Patrol’s Allagash River trip with Allagash Canoe Trips. I have heard the moose population is alive and well in Maine.

I did see a coyote in Baxter State Park, but that was it

No moose in Baxter State Park

My first outdoor adventure in Maine once again produced no moose sightings. I went on a three day backpacking trip in this state park famous for being the end of the Appalachian Trail. I hoped it would also gain fame for ending my lack of moose streak, but the streak continued.

When I arrived in Greenville, Maine, my first question to Chip and Lani was the probability of seeing moose. They said they did not see any on their last trip and feared hunting season was keeping them out of sight. When I heard there was 13 of us paddling on the trip, I just shook my head. To make matters worse, we would be paddling on Friday the 13th. We had better hope of seeing a crazed madman than a moose.

Could paddling with the Bull Moose Patrol stop the streak

On the flip side, we were paddling a Bull Moose Patrol sanctioned trip. I know Scott could not personally guarantee a moose sighting, but perhaps this was the added karma needed to offset the rumblings of possible bad luck.

Moose in the distance

On the second day of our trip, Chip pointed in the distance to a moving chocolate blob and announced “moose.” I squinted my eyes to make out the big beast in the distance. Before we could paddle another hundred yards, the chocolate marshmallow took off for the safety of the forest. I was glad the streak was over, but I wanted photographic evidence of the fact. I could just see it. “We saw a moose!” Moose madness nbelievers would ask, “did you get a picture?” Me, “no, it was a half mile away.” Moose madness unbelievers under their breath, “yeah right you saw a moose.”

Later in the trip the same scenario played out. “Moose” was called out and a chocolate blob faded away into the forest. This time though, as we approached where the moose disappeared, one reappeared. It started to swim across the river right in front of us. I grabbed for my Sony A6000 and zoomed in to get a few pictures.

Another moose then appeared on the shoreline. It became clear that the first moose was the calf and the second was the mother. We debated whether we should stay where we were or paddle forward to get out of their way. We feared that we might get in between the mother and the calf and separate them. Before we could come to a decision, the mother calmly swam across and joined its offspring. Meanwhile, I was photographing like a mayhem possessed madman.

Moose calf takes off for the safety of the forest

Then the mother emerged

Taking a look back at 13 awestruck paddlers

Moose madness – Mother takes off to reunite with her calf

It was an awesome experience to see such an incredible wilderness drama play out right in front of us. To have the streak broken earlier by the distant moose was cool, but this took the moose sightings to a new level. It is something I will never forget, and we had only just begun.

Cow in a cove

Later that day as we neared our campsite, a cow feasted on underwater grass in a cove on the bend of the river. She did not concern herself with us one bit. I again photographed like crazy as we paddled on by. Canoeing is a great way to see moose, as water is their environment, and you come upon them more quietly than you would walking through the forest.

Moose dipping its head in the water

Another cow and another calf

The next day, we came across another cow and calf as we entered Round Pond. This time, this duo did not stick around, but I got a few shots as they hightailed it into the woods. Our group ended up with eight total moose, although I saw only the six described in this post.

For the rest of the trip, I guarded my camera cautiously. I feared we might dump and destroy all moose madness evidence. Fortunately, this did not happen. We arrived safely at the end of the trip and all photos were quickly downloaded once we returned to Bangor.

Until the moose population recovers in Canada and Minnesota, the Allagash River is the place to get your moose madness fix. While it is not a given you will see one, I would say the odds are in your favor if you paddle for seven days on this beautiful river in Maine.  Check out Allagash Canoe Trips for more information.