After a grueling hike into Sirena Station, we were lucky to stay at this fabulous destination for two nights. We were greeted to several Baird’s tapirs eating vegetation at the fringe of the jungle. This was why we came here. Sirena Station may be the best place in the world to see these endangered animals. 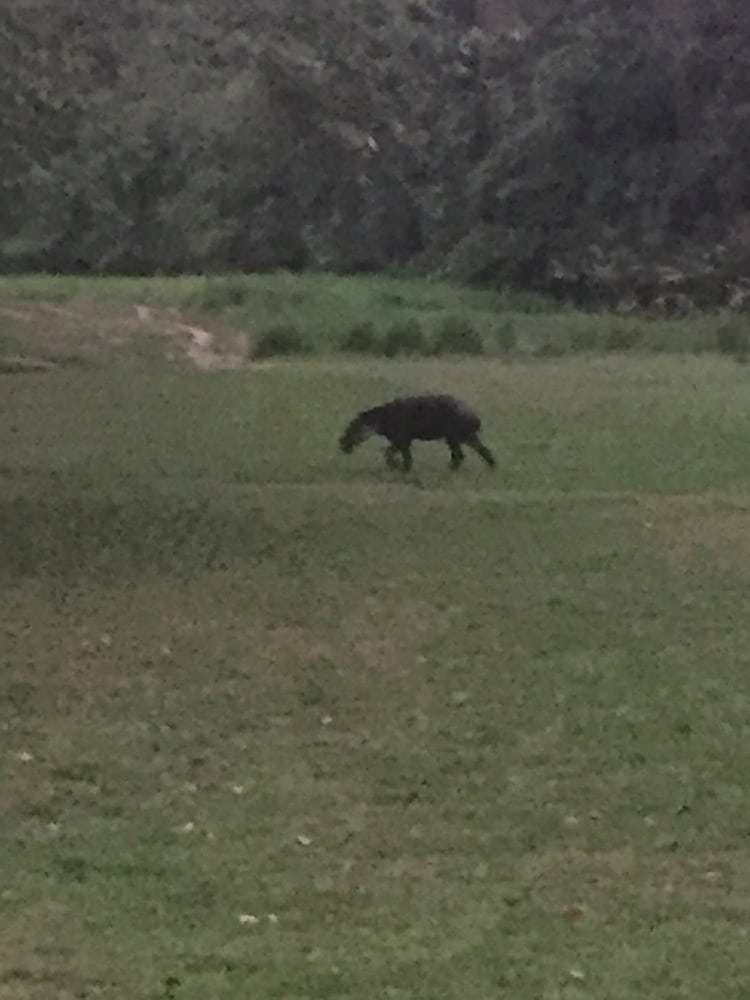 Related: Hiking into the Corcovado cauldron

Upon arrival, we were given our bed assignments and tickets for meals. You cannot bring your own food into Sirena. Visitors can bring snacks for the hike in and out, but all breakfasts, lunches, and dinners are eaten in the mess hall. I brought a plastic bottle of vodka and made myself a couple of drinks and then passed out almost immediately. 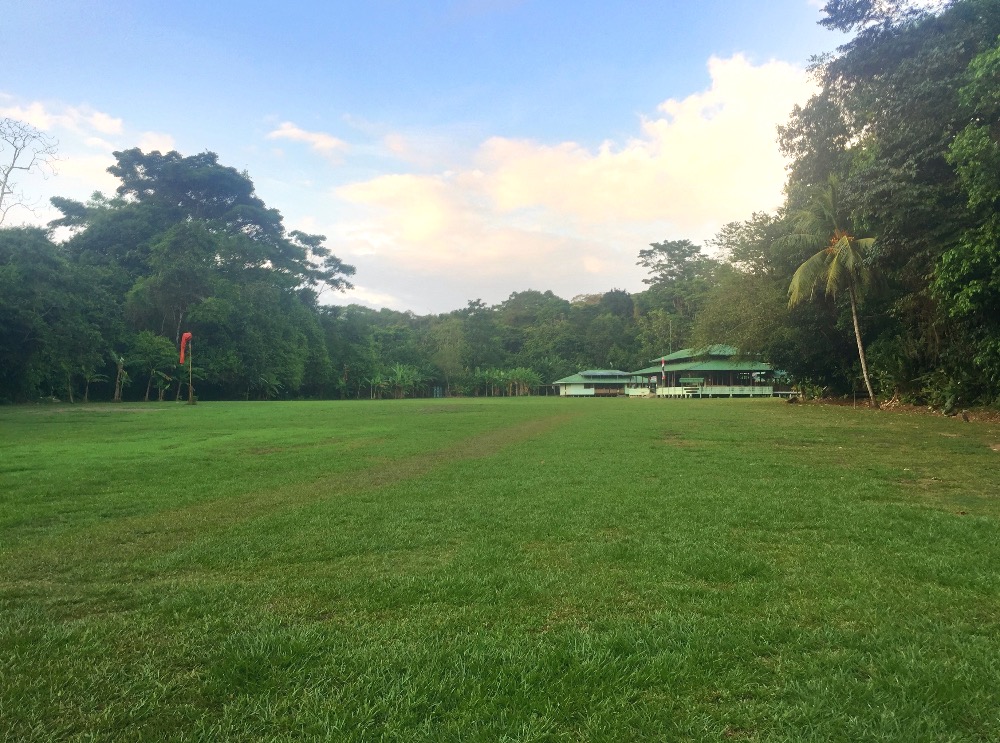 Fresh cut grass at sirena Station for the plane runway

No alcohol at Sirena Station

The next morning we awoke and had breakfast. The cap on my plastic vodka bottle broke, so I could not put it away in my backpack. I set it upright next to my bunk. After I returned from breakfast, I returned to see a mob of rangers pointing at my bunk. I though perhaps they were not pleased with the mess around my bunk. 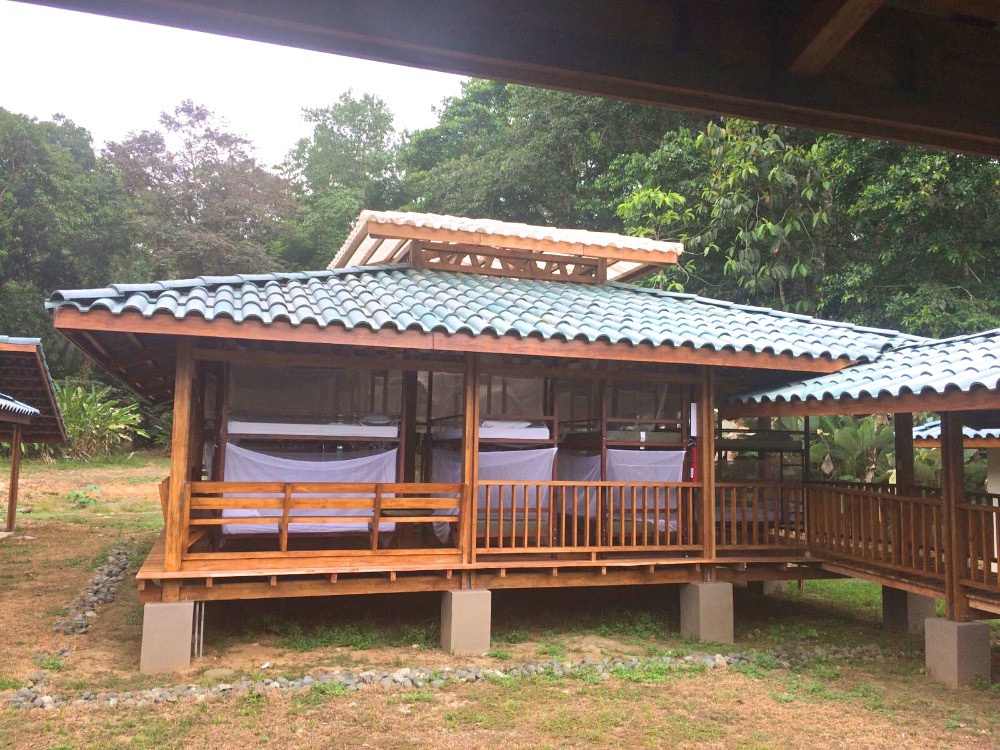 The lodging in Sirena Station comprise of bunk beds with mosquito netting with no walls, so the temperature is same as outside – Photo courtesy of the FomoTraveler

Instead, they were pointing to my vodka bottle. There is no alcohol allowed at Sirena Station. I had to pour it out, but at least they did not fine me or make me leave. I apologized profusely and poured it out. 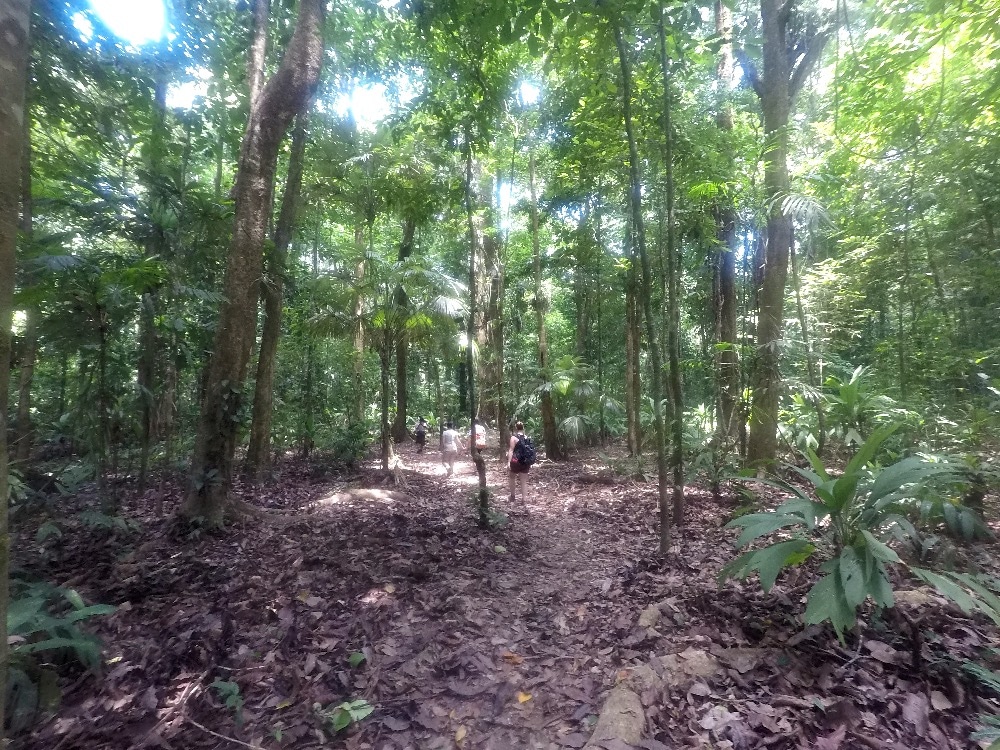 Hiking through the Corcovado rainforest near Sirena Station

The day was oppressively hot again. We went out for an early hike and saw more tapirs, currosows, caiman, crocodiles, trogons, and a sloth and her baby. The wildlife is just everywhere around Sirena and so easy to see. The area is so remote that few people come here and when they do they come with cameras and binoculars and not guns. This is the way it has been since the late 70s, so the animals around this ranger station do not see man as a threat. 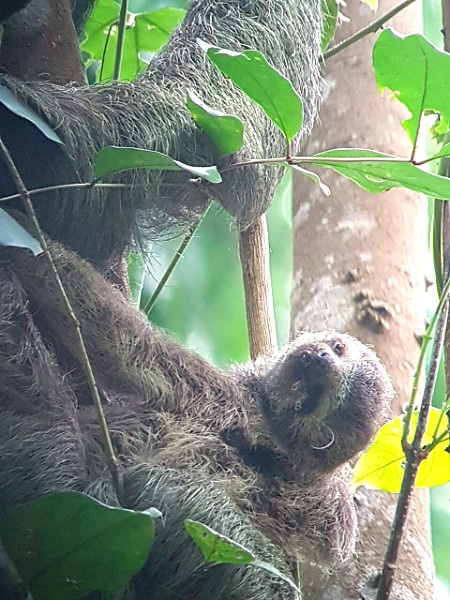 There are two rivers that enter the sea near Sirena Station, and the station is right in the middle of them. These rivers are great spots to see crocodiles, tapirs, bull sharks, and many birds. We saw a mother and baby tapir crossing the river at both rivers early in the morning. The first was on this day and the second was on our hike back. 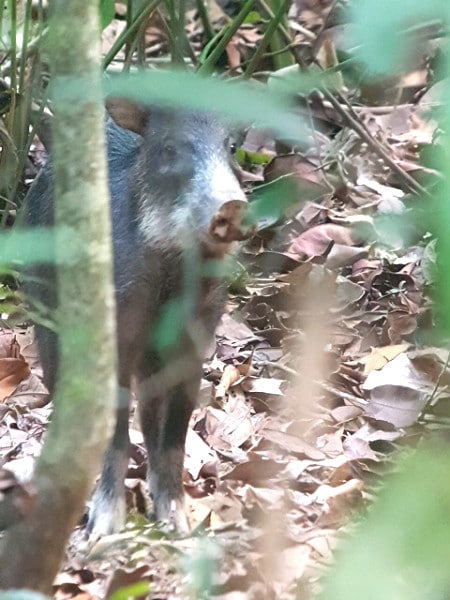 Have you seen the little piggy because he has seen you

One animal that I hoped to see on this trip was a peccary. I got my wish and more. We came across a whole herd in the jungle. We followed them for over an hour. It was interesting because they had a couple of individuals that covered their flank. Each time we came too close these guards would warn the rest of the troop and stare us down. We did our best to keep a respectable distance. 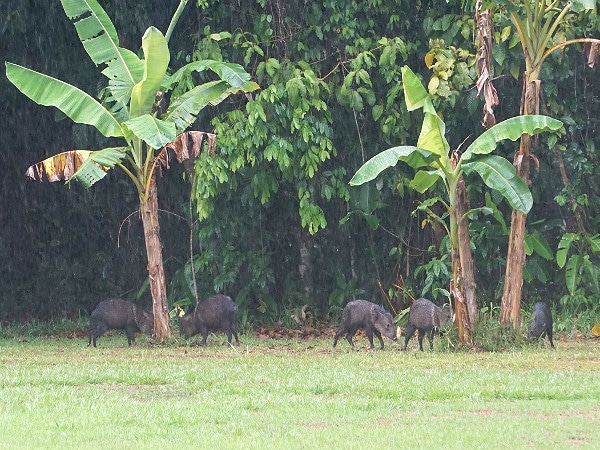 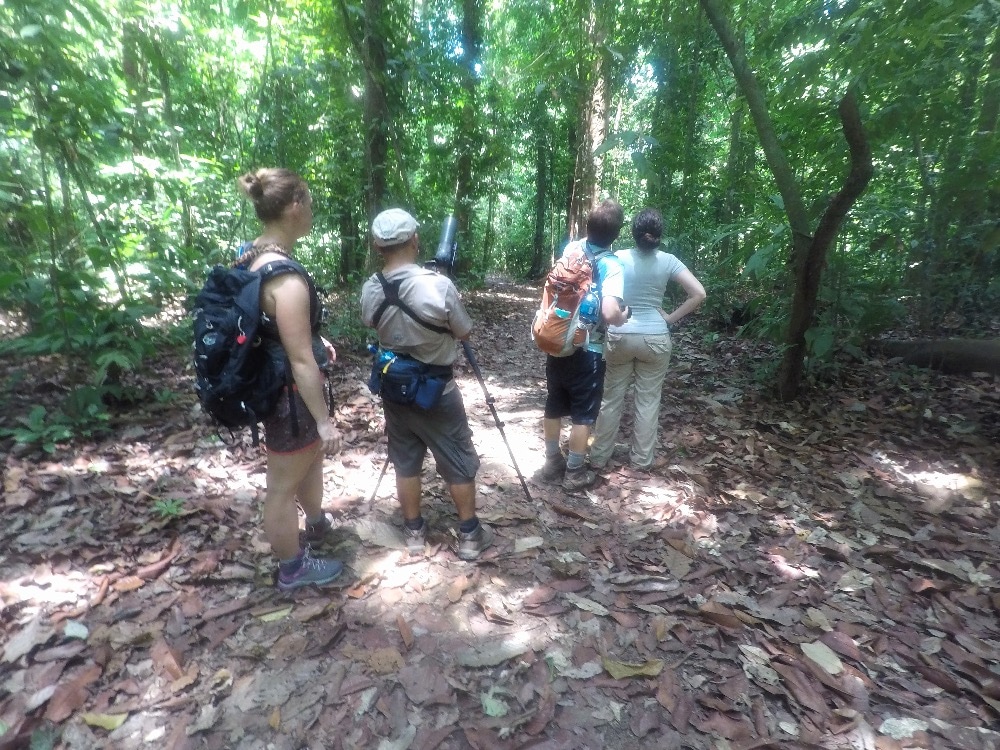 Rain and wildlife spotting from the porch

We came back for lunch and our afternoon hike was canceled due to rain. I have never been more thankful for rain in my life. Not because I was happy our hike was canceled, but because it cooled down the jungle. The temperature dropped probably by ten degrees.

We spent the rest of the afternoon hanging out on the porch at Sirena talking with other travelers and looking for wildlife. It was amazing how much we saw by just looking at the edge of the jungle. We saw a guan, spider monkeys, more peccaries, scarlet macaws, toucans, and more. 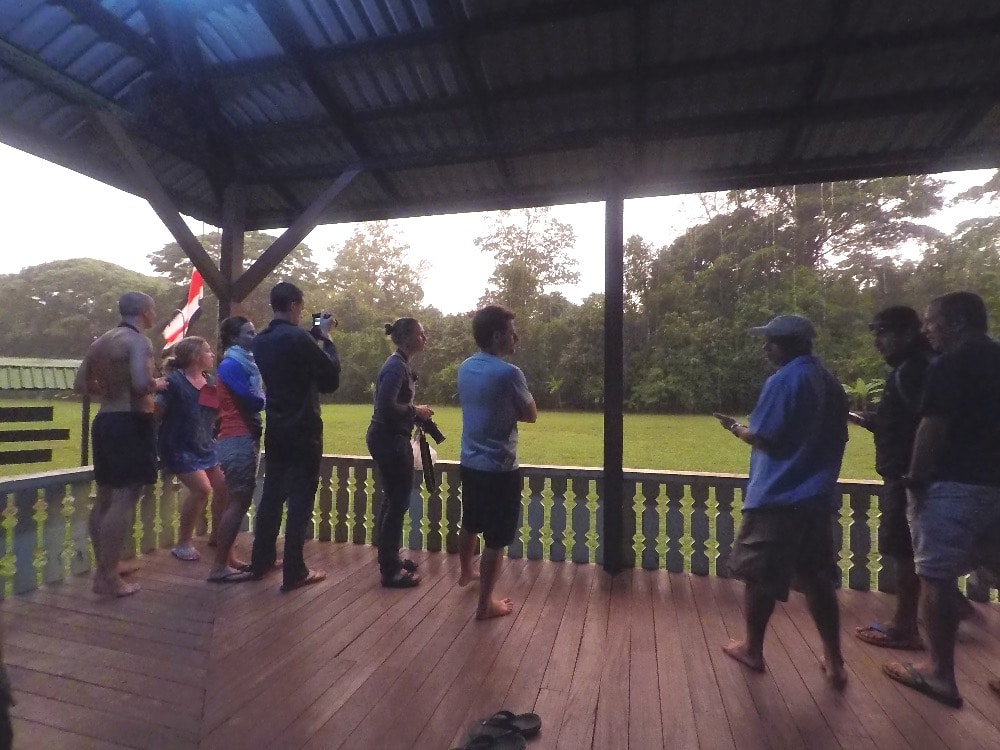 Checking out the wildlife from the Sirena Station porch

There was a guy with a Detroit Tigers shirt on, and I asked if he was from Detroit. He replied that he grew up in Michigan, but he now lives in Chicago. Turns out Derek and his wife Sara live in Logan Square only a few miles south of me. We ended up hiking out with them the next day. 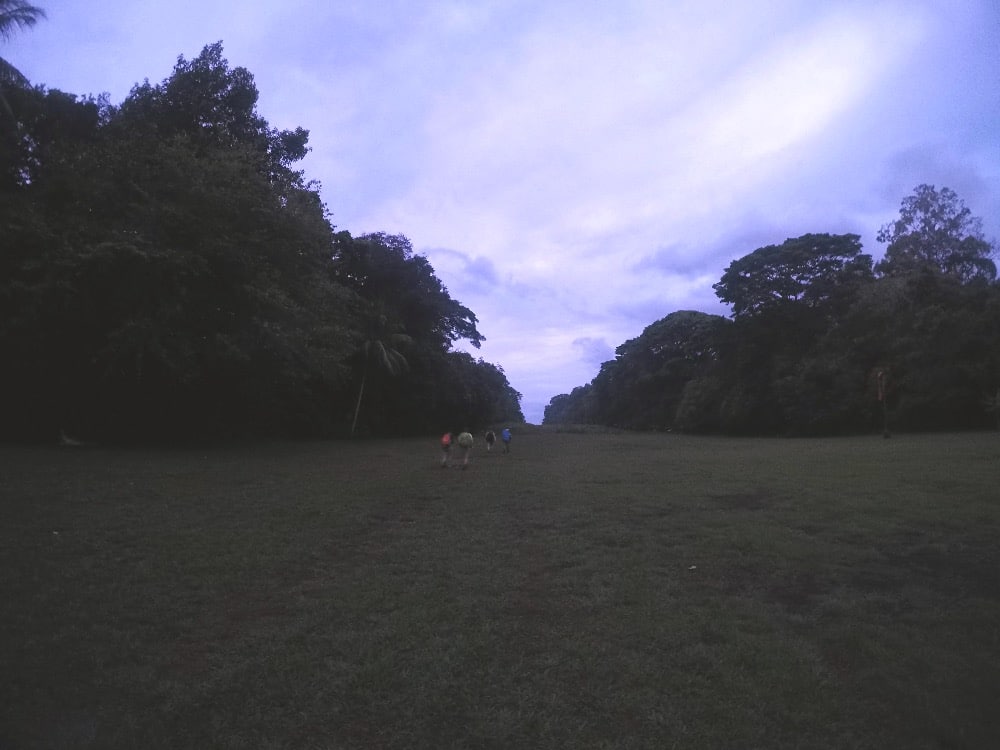 Early morning departure from Sirena Station to beat the heat

Early departure the next morning

The next morning we woke up around 4:30 a.m. and got ready for the hike back. We were on the trail by 5 a.m. It was still dark, but growing lighter as we headed towards the ocean down the green grass that serves as the runway for planes landing. We soon were at the river and crossed. It was a little deeper than a few days ago thanks to the rain. A Baird’s tapir and its baby crossed upstream as we were putting on our socks and shoes. 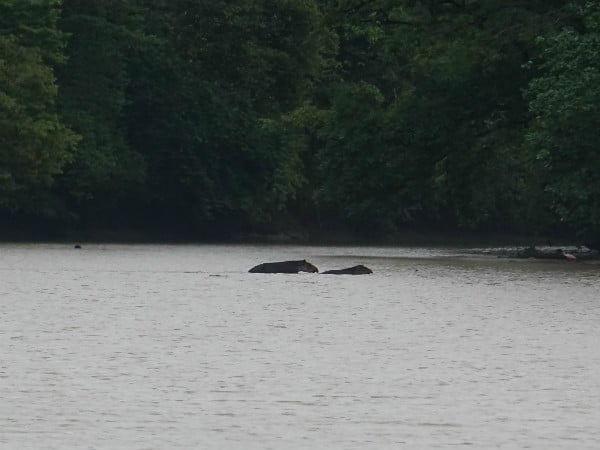 Easier hike back thanks to cooler temperatures

The hike back was far from easy, but it was a piece of cake compared to two days earlier. The temperature remained hot and humid and the sand did not get any easier to walk on. We all had blisters and raw spots from friction; however, we were all thankful for the drop in temperature and most importantly, the cloud cover. 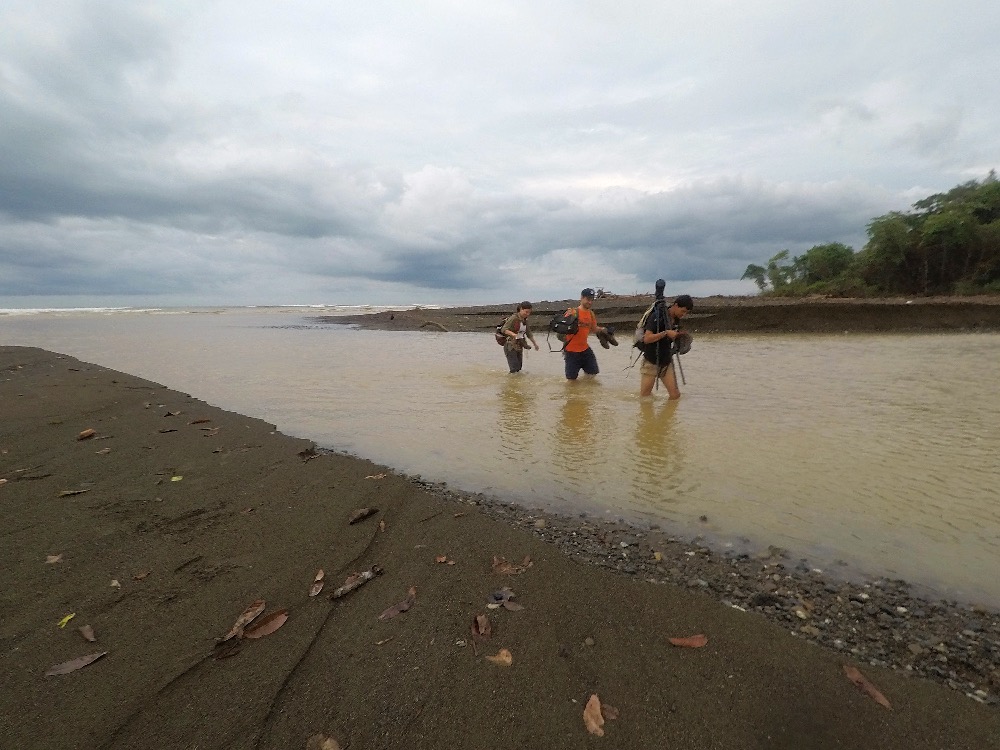 The La Leona Lodge is about two miles from the end. We stopped there and had a few beers and toasted to the trip’s near end. A few more miles, and we reached Carate. We had one more adventure before getting back in the truck. The rain had washed away the makeshift bridge, so we had to wade across. 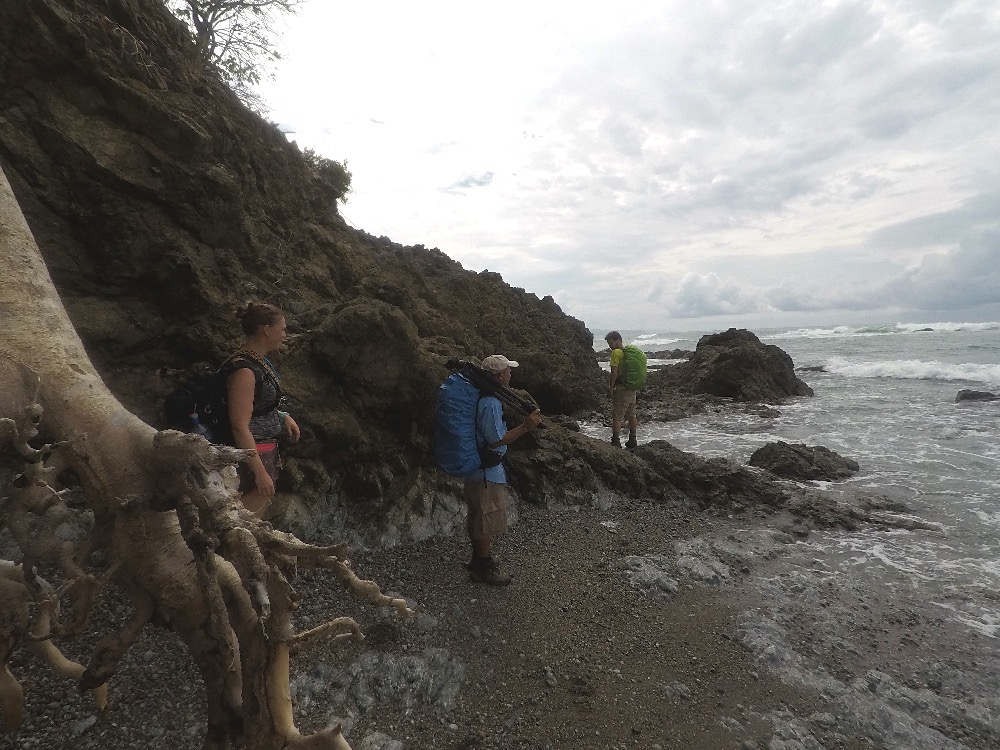 Pausing on the way back to Carate in Corcovado National Park

A horde of scarlet macaws welcomed us back. They gorged themselves on almonds while we satiated our photogenic appetite. We spent about 15 minutes taking our last Corcovado wildlife shots before getting in the truck and heading back to Puerto Jimenez. It was an end to one of my most intense wilderness adventures. 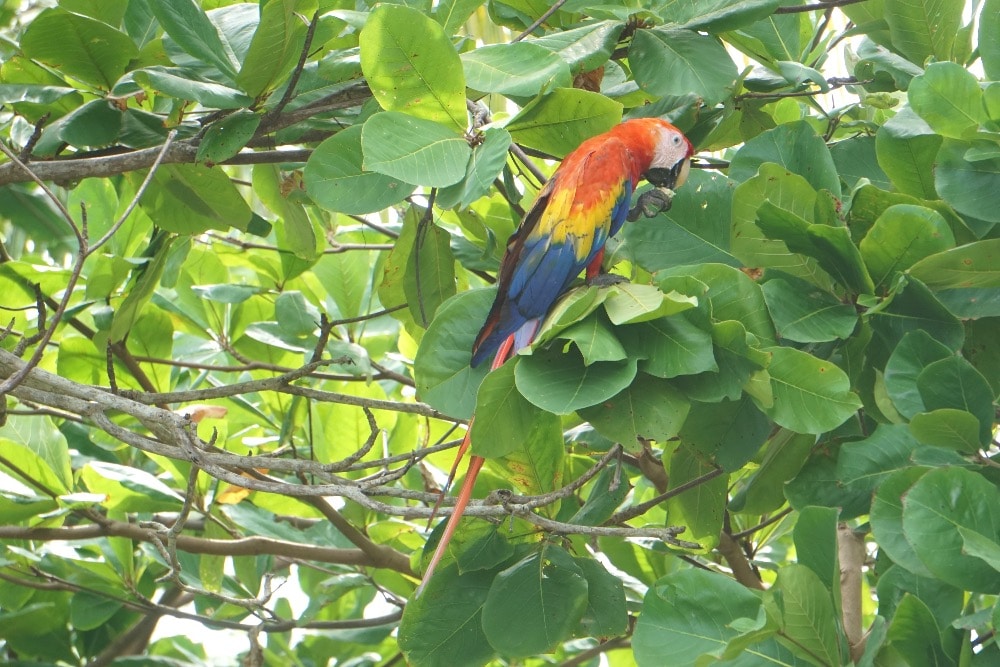 The perfect way to end our Corcovado adventure

Someone looked at the temperature in the gage in the truck on the way back. It was 95 degrees that day. That means it must have been over 100 the day we walked in. Funny that we were thankful for a 95 degree day to hike in.

If this trip appeals to you, check out Surcos Tours website for more information. 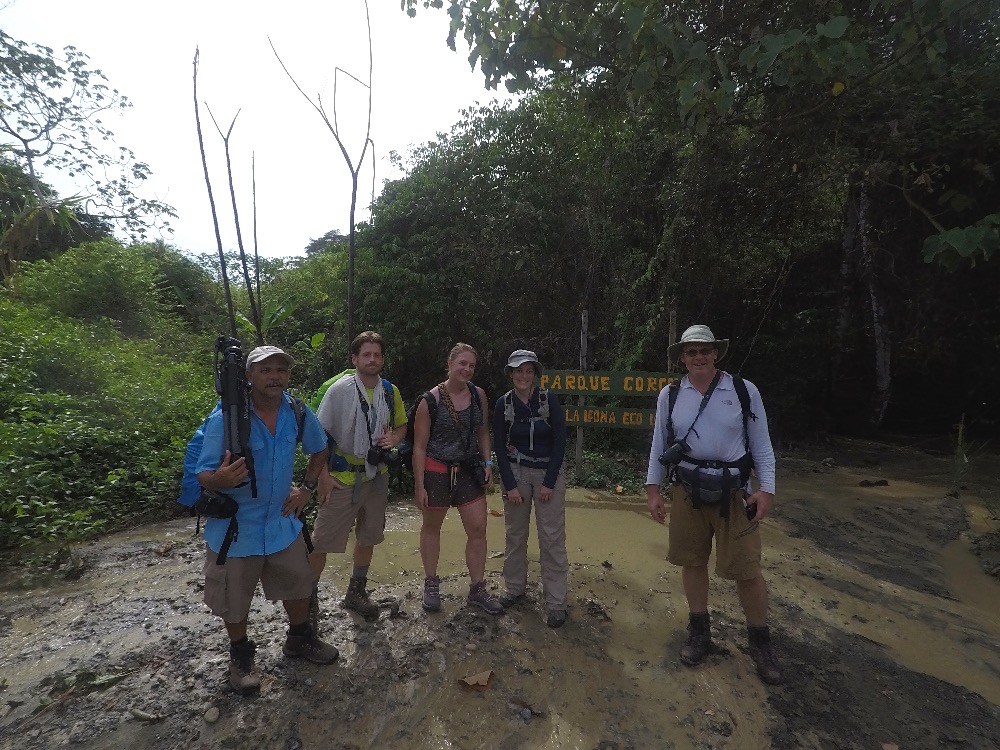 Group shot with our Surcos Tours guide, Oscar at the end of the trek