In October of this year, I plan on paddling the Allagash River Waterway in Maine with Bull Moose Patrol. Since I am spending a week with a new group in the wilderness, I thought it would be a good idea to go on a smaller trip to see how I fit in with the outfit. It seemed like a good excuse to partake in a Flambeau River rapids canoe adventure.

Justing taking the bow during our Flambeau River whitewater adventure

I drove up to the Flambeau River State Forest as soon as I finished with class on Friday. I arrived shortly after midnight. Within five minutes of my advent, a shot of whiskey mysteriously ended up in my hands thanks to one of my fellow campers. The relationship commenced on a positive note.

I set up my hammock and proceeded to celebrate with a couple of beers. The group had already done a river trip day, so I got the scoop on the next day’s itinerary and trip report on the first day. I seethed with jealously after hearing a bear was seen along with other interesting wildlife. 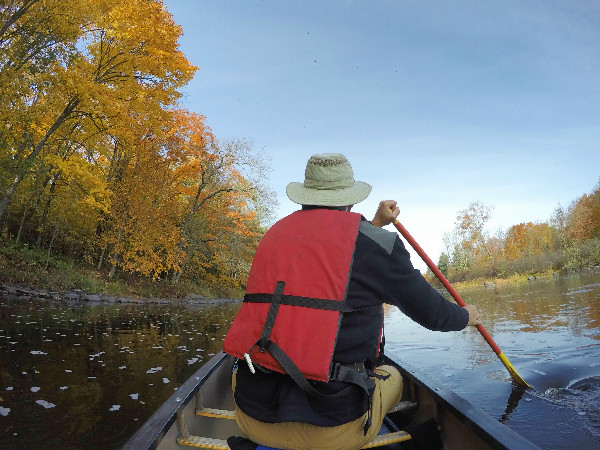 Flambeau River was a little more spectacular in October, but still not bad in June

This was not my maiden voyage on the Flambeau River. I undertook a trip on the Flambeau as a child with my parents and two years ago on the South Fork. This was going to be my first trip on the North Fork, so I was looked forward to checking off both forks of the Flambeau off my list. Next on the list is camping the nearby Turtle Flambeau Flowage.

The adventure began at Camp 41 landing. I waded out and took a few casts into the Flambeau with no luck while waiting for the car shift. The weather turned out a mixed bag.

The sun shined with blue skies overhead, but a strong wind made certain stretches on the river a burden. At least we did not getting any rain on this day; however, that weather system moved in the next day.

Camp 41 Landing on the North Fork of the Flambeau River

We got started, and I paddled with Justin who would be on the Allagash River. Scott is the man behind Bull Moose Patrol and the leader for this trip and the Allagash. For his perspective on this trip, check out his blog post.

Scott from Bull Moose Patrol taking a photo of the Flambeau River – I wonder if this photo made it on his blog?

Whitewater ratings rank the difficulty of a river and a rapids. Each rapids is given a rating from I-VI. The ratings go up in difficulty depending on the water flow going through the rapids and the difficulty involved. Most easy rapids have a chute, and you just need to maneuver the canoe straight through the chute.

The rapids we experienced on the Flambeau were class I-II in nature. These rapids definitely created a higher sense of adventure than anything I have been on recently. Some of the more difficult rapids definitely got the adrenaline flowing.

On this day we were joined by solo paddler Tom, who was an Uncle of Scott. Along with Kurt and Katja from Madison, fellow world travelers Helen and Aaron, and Scott’s friend Griff rounded out our group. I really enjoyed the group.

I previously paddled the Flambeau by myself. There was not a sole on the river that day, so it was nice having a group of paddlers around to share canoeing and traveling stories and not to mention a few beers as well.

Some of the Bull Moose Patrol crew on the river

When I paddled the South Fork, there were no rapids of note. There were several riffles, but nothing that even amounted to a Class I. Different skill levels were needed to paddle the North Fork.

After battling the wind for an hour, we reached Wannigan Rapids, which was a series of class I chutes. The water was somewhat high due to spring rain, so the rapids and river flowed at a healthy, but not dangerous level.

The amount and difficulty of some of the rapids surprised me because it was much more difficult than any on the South Fork; however, it did not shock. Northern Wisconsin is known for many rivers with class I-II whitewater and even higher. I had paddled the nearby Brule River and this river was full of ledges and rapids.

We had no difficulties getting through Wannigan. All of these rapids had a clear chute to head towards. We did take a little water on this rapids and ones farther down, but nothing too concerning.

Cedar Rapids contains several pitches with one being a solid class II. We could hear it before we could see it and the river seemed to disappear as the water descended over the lip. The rapids were noteworthy enough to pull over and scout beforehand. Scott and Griff went off to show us how it was down.

When we were not navigating Flambeau River whitewater, we struggled against headwinds

Unfortunately, although they picked the right route, it just did not work out. They went over the chute and the canoe lurched to the left and they went for a swim. It happens to the best of us. They picked the right chute and went through straight, but the bow paddler grabbed the gunnels when his paddle needed to be in the water.

I was a little concerned about going through, so we tied up all our belongings in case we experienced a similar fate. Fortunately, we went through unscathed except for bringing in a little water.

In between Flambeau River whitewater

As always, I had my GoPro filming throughout the day; however, with little success early on. First of all, I was wearing my wide brimmed hat, and the wind pushed the flap of the hat over the camera obscuring some potential quality footage.

Going through Wannigan Rapids my battery died, so I missed that opportunity. Through Cedar Rapids I operated my GoPro through my phone app. I put the phone in my upper pocket in my shirt. Somehow, my chest must have pushed the button as it mysteriously turned off in mid descent.

At Beaver Dam Rapids, I finally got it right. Fortunately, I was busy filming on other stretches too, so I was able to gather enough film to make the below Youtube video. I also captured Scott and Griff’s “oh no” moment.

The last impediment of the day before a bar, campfire, and beer was Beaver Dam Rapids. We could see the take out on the other side, but there was a solid class II rapids in front of us. In my mind, the difference between Class II and any rapids on a higher scale is a technical move in fast water. This rapids had a solid flow, and we needed to turn right after going down the chute.

Capturing the Flambeau River with a GoPro headstrap mount

I explained to Justin that he would need to draw like crazy after we started to go through in order to avoid the next set of obstructions. A draw is a maneuver that changes the course of the bow either left or right. This time we took the lead.

Justin is a new paddler, but he acted like a veteran and got the bow turned in the right direction, and we made it through. Everyone else followed through the falls in successful fashion.

After we finished, we headed over to Big Bear Lodge for old fashions, dinner, and a bear selfie. This is in Winter, Wisconsin about 35 minutes southwest of Park Falls. We were not canoe camping on this trip.

It was late, and we did not have the energy to make dinner in camp after seven hours of battling the wind and maneuvering through class I-II rapids. We then returned to camp and discussed the next day’s options.

A pretty serious set of thunderstorms rolled through the next day, so I bailed and drove home. It was a lot of driving for one day of paddling, but with several class II rapids paddled, it was well worth it. It was also great meeting a new group of paddle enthusiasts.

Before leaving Kurt and Katja cooked up a wonderful chicken enchilada casserole in a dutch oven over the fire. I added some guacamole and salsa dip. Looking forward to paddling the Wisconsin River in August and the Allagash River in October with Bull Moose Patrol.

Kurt and Katja created this amazing chicken enchilada casserole over the campfire, which was Bull Moose Patrol approved as you can see by Scott’s thumbs up and the fact we are enjoying it in the scene at the top. 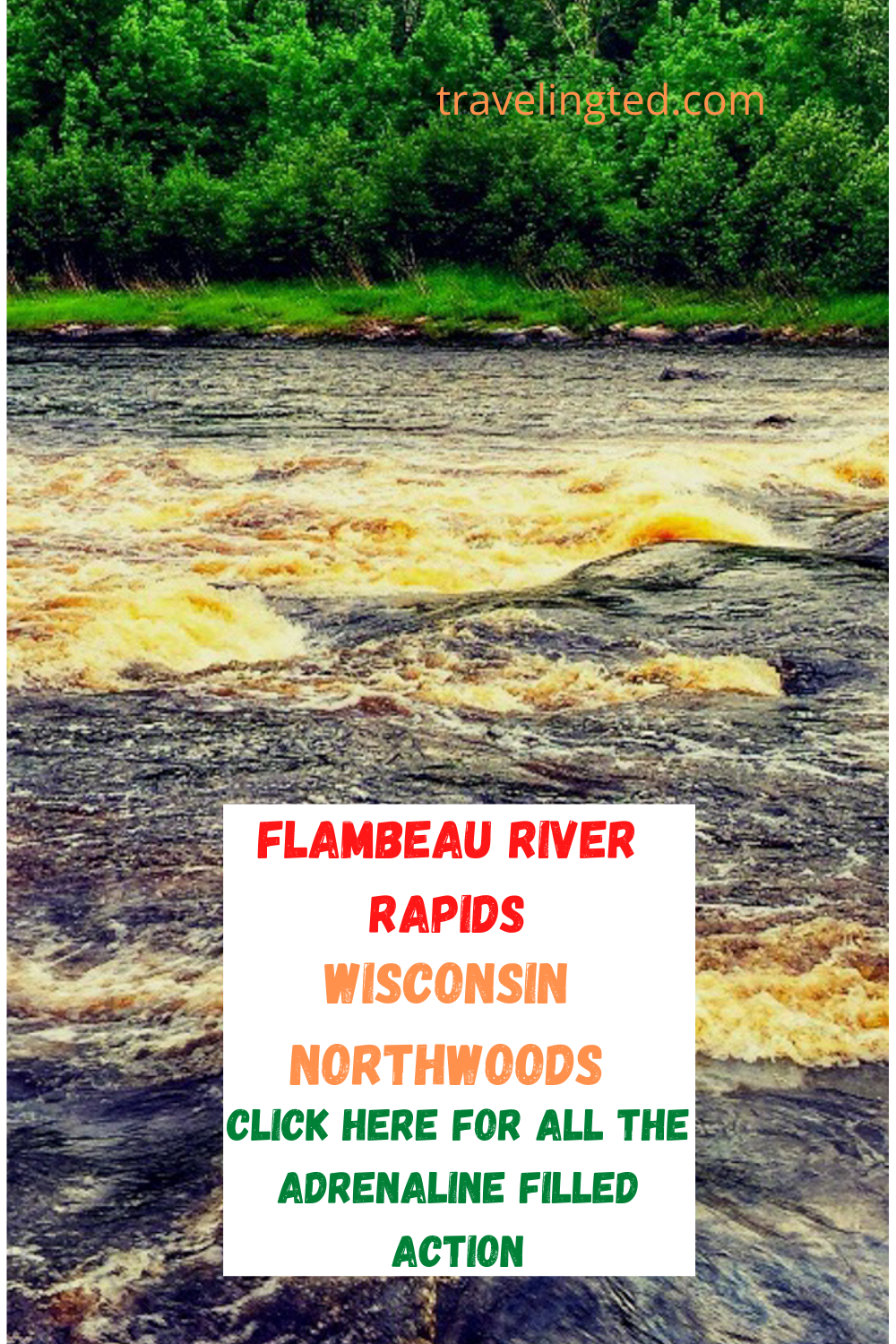