Kayaking through class II rapids on the Brule River 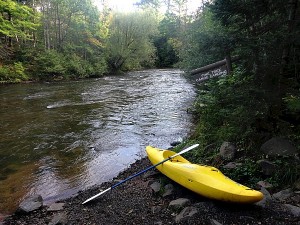 The Pine Tree Canoe Landing on the Brule River: Where this adventure started

Day one from Stones Bridge Landing had a little bit of excitement with some class I rapids and some rock gardens, but the next stretch down to the Highway 13 Bridge from the Pine Tree Landing on the Brule River is where the real fun takes place.

I was provided a spray skirt and a whitewater kayak by Brule River Canoe Rental, so I knew this stretch was no fooling around. I asked Saul, who is the Johnny on the spot for the outfitterl, if he suggested I should scout any of the rapids. He did not think I did as the rapids were well definite chutes. 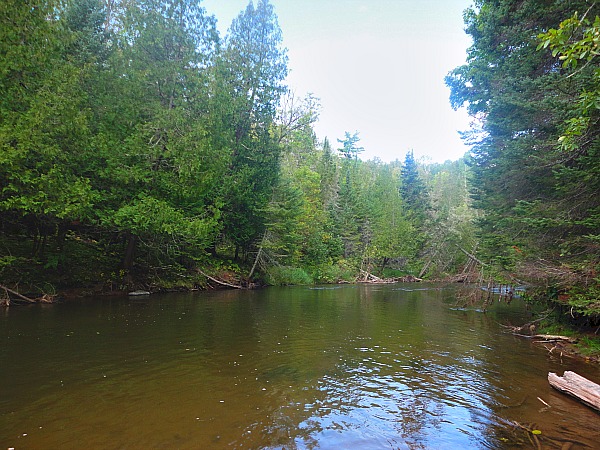 I would argue that many Class I rapids are harder than some class II and III because they can be more difficult to read and have more rocks stretched out across the river. Class II and III rapids usually seem to be vees where you just need to get your bow pointed towards it and the current does the rest.

The most challenging rapids on this stretch occur closer to the beginning. The most outstanding rapids are the Lenroot and Mays Ledges, which according to the Brule River State Forest literature are class II-III. The water was low, so they were definitely more class II on this run. I would imagine in spring they might be a little more intense. 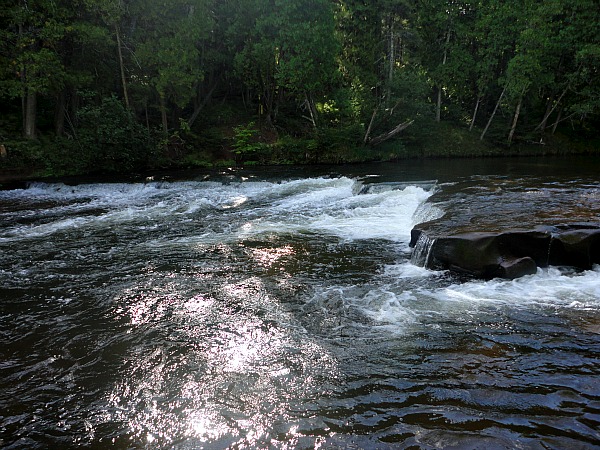 The Lenroot Ledge with no discernible chute at this water level

One of the Lenroot ledges had no clear passage way. It was a rock all the way across. I had to pick which part of the river had the most water flow going over, so I would not get stuck on the ledge. In the video below you can see me back paddling like crazy to try and discern the right passage. This is one I had wished I would have scouted beforehand, but scouting would have showed no clear passage any way, so it did not really matter.

I did scrape on the rock, which was inevitable, but I successfully went over. Another ledge I was not so lucky. I did not dump, but I stayed on the right side and did not pick up where the deeper channel flowed, and I  got stuck on a long flat ledge. I floundered around like a fish out of water as I tried to maneuver myself off the ledge. I finally did, and I was on my way.

When you are constantly concentrating on the river it is hard to admire the scenery, but the river is beautiful. One highlight was a bald eagle on a low lying tree only about twenty feet from me as I entered a rapids. Unfortunately, I did not have time to take a picture as this occurred right at the lip of a chute. 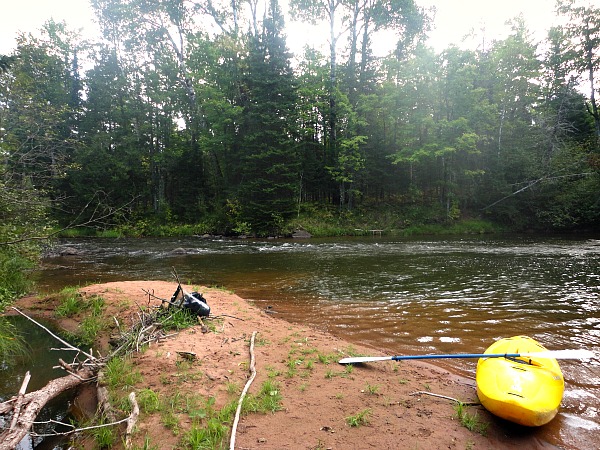 The last mile or so is pretty quiet after the first stretch. This is a little frustrating as you wish you could just turn right back around and kayak the fun stretch of rapids you just passed through, but on the other hand, it is a nice peaceful way to end the paddle. It gives you time to decompress after the adventure.

Many thanks to Brule River Canoe Rental for setting me up with a kayak and a ride. Although the ride was partially sponsored by them, the thoughts, pictures, video, and words are my own.

For those looking for more information on the Brule River and other local rivers, check out Morrall River Films, who produce helpful guides to local rivers in Wisconsin and Illinois.