I have been to Canoecopia several times before, but I usually only go for one day, so it makes it difficult to get the full experience. This year I spent two days at the convention, so I was able to do a lot more. The highlight was seeing six Canoecopia speakers.

Canoecopia is the world’s biggest paddlesport convention held each March in Madison, Wisconsin. It features exhibits from destinations, gear companies, speakers, and much more and it is all focused on canoeing and kayaking. The event is hosted by Rutabaga.

When I go for only one day, I need to rush around to see as much as possible. I usually drive up and back from Chicago, so I arrive a little tired, and then want to leave before it gets too late. This year I got a hotel room in Madison, so I could enjoy the event a little more. With only one day to spend, I have in the past only seen one or two speakers and sometimes none.

Madison, the state capitol of Wisconsin is the site of Canoecopia

I have been itching to get back to these two rivers. I last visited with my mom and dad over twenty-five years ago. They are now part of the national park system having been designated national wild and scenic rivers.

I saw the Namekagon this winter when I skied the Birkie – Thanks to inspiration from Dale Knox and Canoecopia speakers, I would like to return at a warmer time

I get a little taste of these rivers every time I drive and pass over them on the way to Hayward for the Birkie or to the Boundary Waters and Quetico. I have a thirst to revisit, and I hope this was the year. The speech by Dale Cox had me salivating for a return trip.

Our family remembers these rivers more for one disastrous trip than how beautiful they are. Paddling the St. Croix we stopped for lunch, and at the campsite another group was loudly playing a radio. It turned out to be a good thing as we overhead a weather forecast predicting a storm with 70 mph winds. We paddled downstream and found a suitable place to get out and hunkered down. Ironically, it was at Dry Landing. The storm came and the wind was blowing so strong that it reversed the current in the river and standing waves were going upstream. Tornadoes touched down in the area, but we survived just getting soaked and scared.

Canoecopia speakers 2016 – St. Croix River – Wikimedia creative commons – Aaron Fulkerson – I hope to have my own pictures later this summer

Later on the trip, an idiotic family that had joined us brought their friendly pit bull terrier. He hungrily eyed or sweet dog Barney the whole trip. I brought Barney down the water’s edge and Bert got his chance and leapt for Barney and broke his leash and gripped on to his shoulder. It was a violent dog fight, but Bert’s owner was able to hold his jaws and eventually pry him off. 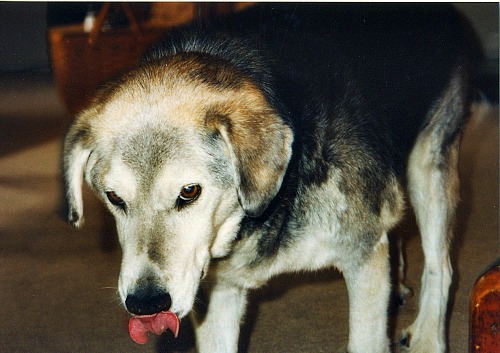 It was a tough trip for Barney

I hope my return to these rivers will not be as eventful. I plan to follow Dale’s advice because I love to fish and catch some smallmouth as I paddle downstream. I plan to camp along the river for a day or two and enjoy some sunsets and campfires.

I have seen many pictures and a few blog posts from the Apostle Islands National Lakeshore, but I have never been. John Frank fell in love with kayaking these islands, and in over 20 years he has visited all twenty plus islands. He makes a good case for me to go up there and fall in love myself. I hope John does not mind if I bud in and fall in love too.

The Apostle Islands have great camping, beautiful caves, lighthouses, good fishing, rocky shoreline, beaches, and even hiking on some of the bigger islands. My only concern is dealing with possible winds along Lake Superior. Looking at the map, there seems to be plenty of things to do on the mainland if wind is an issue. There is even a ferry to Madeline Island, which is not actually part of the park, but is just south of the island chain.

John has actually written a book  (only $26.95) about his over twenty years of exploration of the islands. I am sure it is a great tool for planning a trip.

Door County is outside of the Dells, perhaps the most touristy area of the state. I have been once, and I was not all that impressed. I was with my parents and the weather was horrid, so that played a part in my negative memory.

Seeing Tim’s presentation sold me on the fact that I need to give this destination another chance. Although I am not a big lake paddler, seeing bluffs, fishing, lighthouses, and interesting wildlife are all right up my alley. I was also not aware of the interesting inland lakes to explore, so one does not have to paddle only on Lake Michigan.

If you recognize the name Rolf Peterson, it may be because you have heard his name in connection with the world famous Isle Royal wolf and moose population. He has been living on the island and studying their relationship for over 30 years. When I was 11 years old my dad took me on a 14 day hike of Isle Royal. While camping at Daisy Farm, we were able to see Rolf give a presentation about wolves and moose. This was in 1981 I believe. 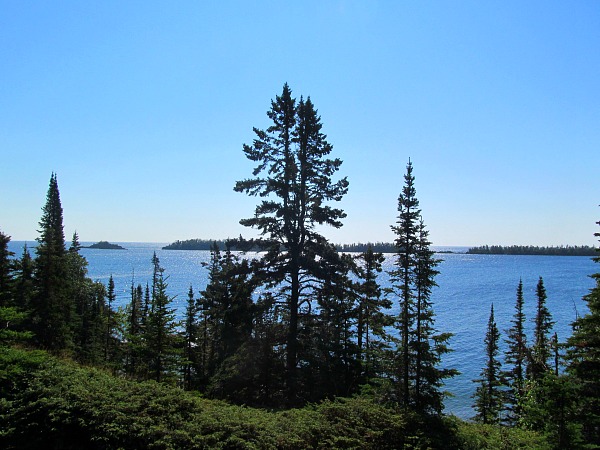 Over 30 years later I got to see him present again. This time talking about circumnavigating the island by canoe. Isle Royale is an island in the middle of Lake Superior. Circumnavigating the shoreline is a 130 mile trek and they recommend taking two weeks. They actually recommended you do not take this trip at all. It is dangerous with nasty gales that can leave you windbound for three days or even worse if you are foolish to try and paddle in dangerous waves. They recommend a more tame trip that takes you through the interior of the island.

I love Isle Royale, but I am going to take their recommendation and never paddle this trip. In fact, I doubt I will ever paddle Isle Royale period. I will return though, but I will leave my canoe on the mainland and hike this island instead since it has over 165 miles of wonderful trails. I did really enjoy this presentation despite the fact it did not motivate me to canoe in their footsteps or paddle strokes. 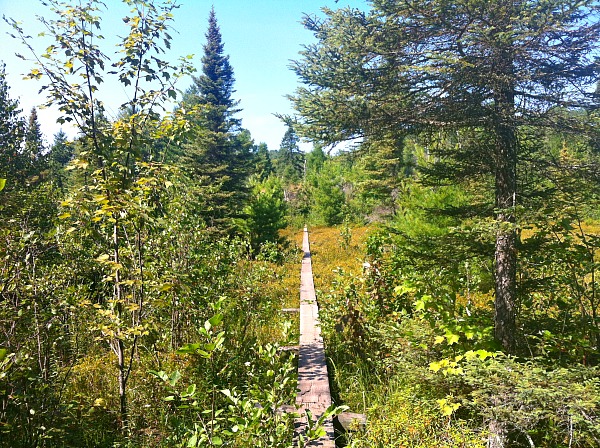 I love Lake Superior, but I have no desire for long paddles in it – I will stick to hiking at Isle Royale

They told some interesting stories of their trips, they had a funny banter only achieved by man and wife who have spent a lifetime together, and they shared some very uplifting thoughts about the human race and its relationship to nature.

This was a presentation I was really looking forward to because my dad lives half of the year in north Florida, and I plan to visit for two weeks later this year. I took my chair and looked over to my left and saw two longtime paddling friends – Peggy Jacobs and Fran Almquist. I had paddled the Everglades with Fran when I was in high school on a trip with my parents and many other rivers.  Three years ago, I paddled the Wisconsin River with Peggy. The paddling community is a small world. 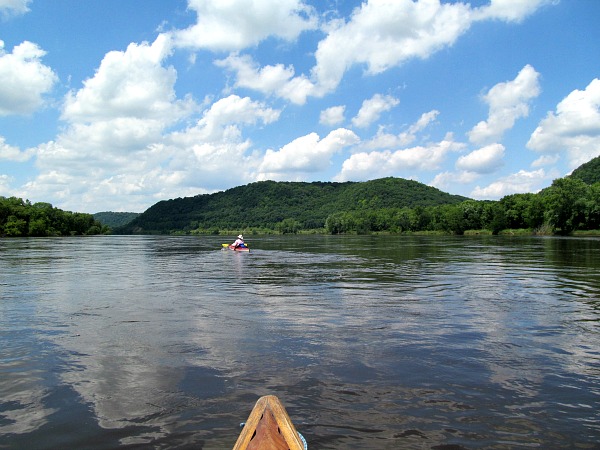 I have paddled this part of Florida several times. Many people only think of beaches and Disney World when they think of Florida. If they do think nature, then they naturally look to the south and the Everglades and Big Cypress. The swamps in the south are fantastic, but the whole state has an incredible network of gorgeous rivers.

North Florida boasts the Ichetucknee, the Suwannee, and the Santa Fe to name a few. This section of the state also has a virtually untouched shoreline. Tommy Thompson stated that this area has over 120 miles of undeveloped shoreline. The only place in the United States that compares is in Alaska as far as a shoreline that is not built up. 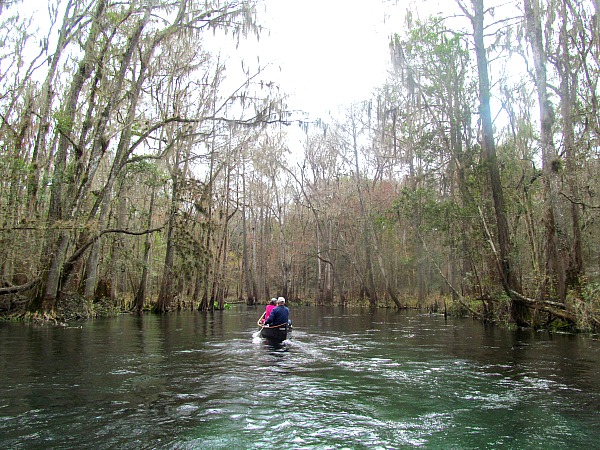 I look forward to exploring some of that shoreline and paddling some of those rivers later in the year. Peggy informed me that she was running an October trip in that area. I might have to join.

Scott is a fellow blogger and social media person who also shares a love for the outdoors. His blog Bullmoose Patrol chronicles his adventures paddling, canoe poling, and other adventures. I was looking forward to hearing about Maine and also meeting Scott since we have so many shared interests.

His presentation did not disappoint with mouth watering pictures of Maine. A state that I am embarrassed to say I have never explored, but it is on my radar. Scott is also an accomplished canoe poler, which I am also interested in because my dad is also a canoe poler. Canoe poling has always fascinated me for many reasons. I think the main reason is it just looks cool to do. Something about the aesthetic of someone standing in a canoe with a long pole.

Scott’s presentation gave an interesting history of the backwoods and guiding tradition in Maine as well as profiled several famous guides from past and present. He is a registered guide himself in Maine. He described the preparation as well as the test itself where he became certified, which sounded quite stressful. 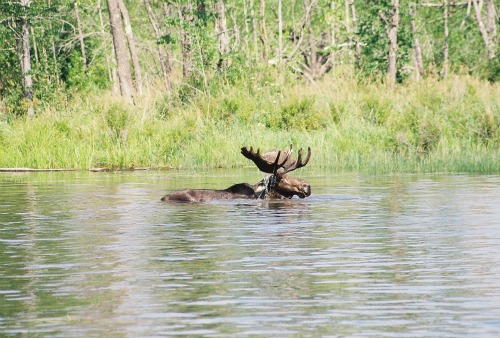 I was sold on Maine before this speech, but Scott’s photos and stories definitely made me want to visit. Some things that made my jaw drop was the fact that he had canoed about a total of a month on Maine Rivers and has never seen another paddler. Also, there are 65,000 moose in Maine. With the sad die off of Minnesota moose, I think I need to get to Maine.

Even though I stayed inside all weekend, I felt like I was on an extreme adventure thanks to the 2016 Canoecopia speakers. I caught fish and camped along the St. Croix, I enjoyed an amazing sunset kayaking the Apostle Islands, I marveled at Door County lighthouses, I was windbound for three days on Isle Royal, I paddled under a canopy of Spanish moss filled trees to a clear Florida spring occupied by manatees, and I poled down remote rivers seeing many moose in Maine. Ahhhhhhhh. . . . . .  I can’t wait for the paddling season to begin.

Did you make it to Canoecopia 2016? What were your favorite speakers? Please feel free to share your experience in the comment section.