One of the best things about attending a big music fest is discovering new musicians. Getting exposed to new talent makes for a great musical adventure. At Stagecoach Music Festival a couple of years ago, it was the Haunted Windchimes that caught my ear. This year at Summer Camp, the band that I cannot get out of my head is The Way Down Wanderers. 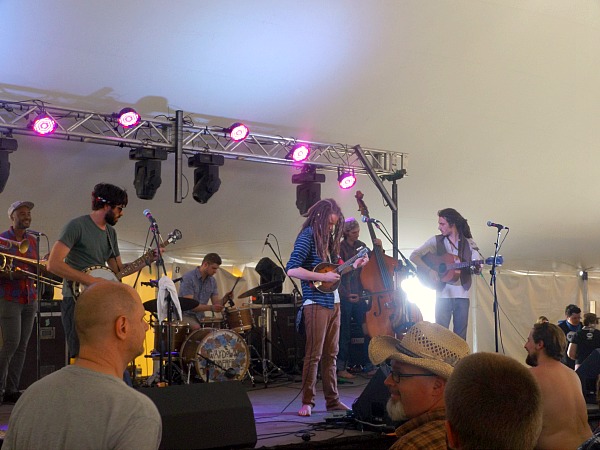 The Way Down Wanderers at Summer Camp Music Festival 2015

Memorial Day is the traditional start of the summer, and Summer Camp Music Festival begins the summer music festival season in the Midwest. Approximately 20 thousand people gather just north of Peoria, Illinois in Chillicothe for jam bands, techno rock, Americana music, bluegrass, classic rock, and several other styles. While jam bands and techno music are the featured artists, the list of musicians is truly eclectic.

Although I enjoy the jam bands, and I can handle a techno group or two, my preferred music is Americana, so I was happy to see this genre well represented at the fest. I had never heard of the Way Down Wanderers before, but I knew from their name that they would be right up my alley, and they did not disappoint. 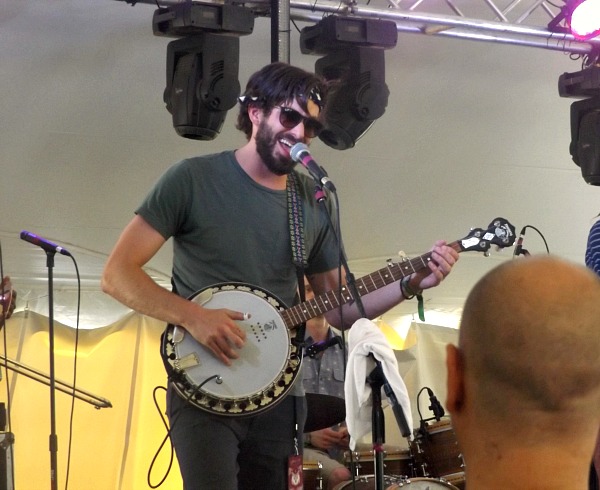 Ben Montalbano from the Way Down Wanderers

The Way Down Wanderers at the Soulshine Stage

Their first set was on Saturday at 2:45 underneath the Soulshine Tent. I read in their bio that they feature two half brothers that met for the first time five years ago and were astonished to find that they both were pursuing similar musical tracks. I walked into the tent and there was a decent crowd in front of the stage. We entered the tent and got into position. 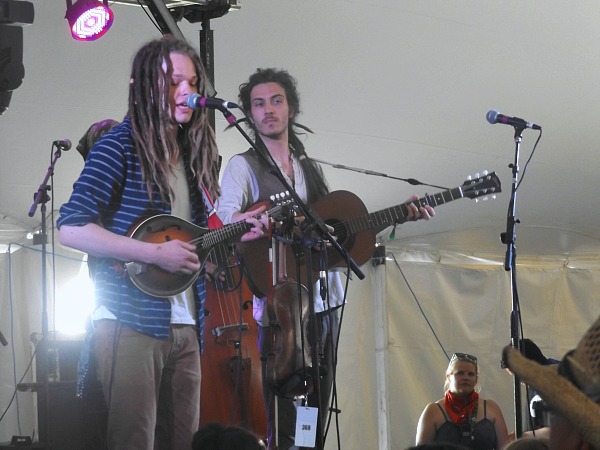 Collin Krause and Austin Thompson from the Way Down Wanderers

I immediately liked their sound. It was upbeat, twangy, and I loved their harmonies. The two half brothers, Ben Montalbano and Collin Krause play banjo and mandolin. Krause also plays a little fiddle. They are joined by acoustic guitarist and singer Austin Thompson. Both Montalbano and Krause also sing lead and harmony vocals. John Williams is at upright bass and John Merikoski rounds out the band playing drums. They also had a small horn section at Summer Camp, which was an interesting spin. I was not the only person digging their sound as the whole tent was dancing or at least foot stomping. 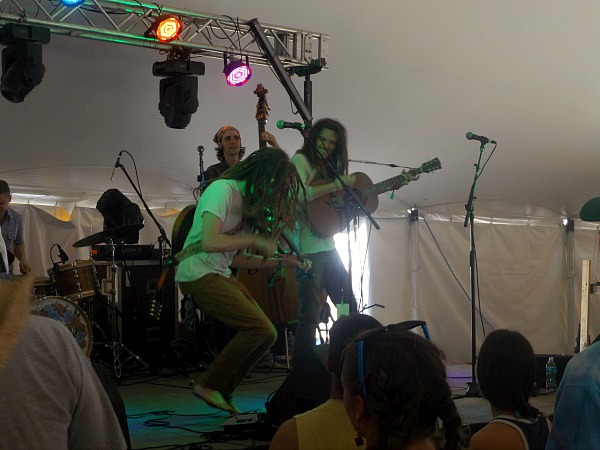 Krause and Thompson of the Way Down Wanderers laying it down

The Way Down Wanderers part II at the Camping Stage

Their set was over way too soon. I fortunately did not have to wait long to see them again. They were playing the Camping Stage at 6 p.m. There I was again to see them, and even though they duplicated a song or two, I was transfixed. Near the end, they played a real lively tune, and had the whole crowd with them. After that, they slowed it down with a beautiful ballad featuring Krause on mandolin and lyrics. It really impressed me that they had the courage to take it down a notch after having the crowd in a frenzy. 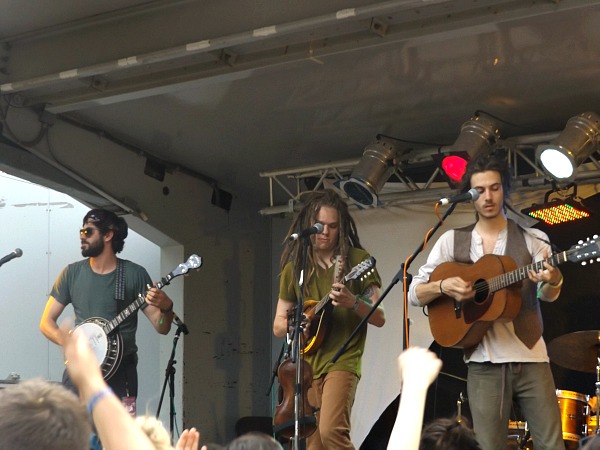 Way Down Wanderers later in the day at Camping Stage

The most incredible part though was after their show they did an encore in the middle of the crowd. They unplugged, walked right into the crowd and asked everyone to circle around them. Then they did a touching rendition of Will the Circle be Unbroken with the whole crowd singing harmony. 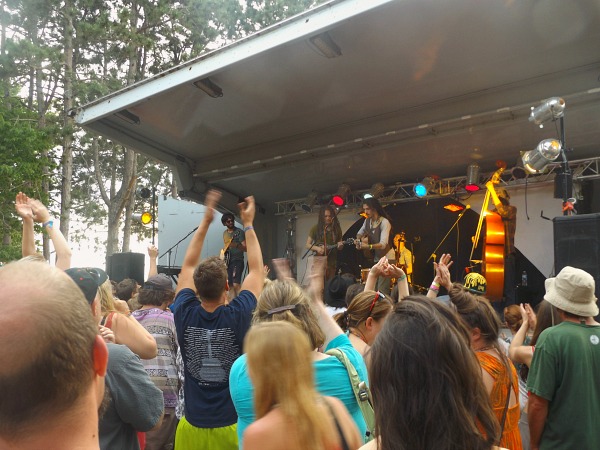 The Way Down Wanderers rocking the Camping Stage

I took a few pictures of the scene and contemplated getting closer to try and get a quick video in, but it was such an incredible moment that I just decided to enjoy the experience and listen to the music. This was their last song, and it was such a moving scene that I almost left in tears. Tears of joy from sharing an awesome time with fellow music fans, friends, and an exciting new young group. 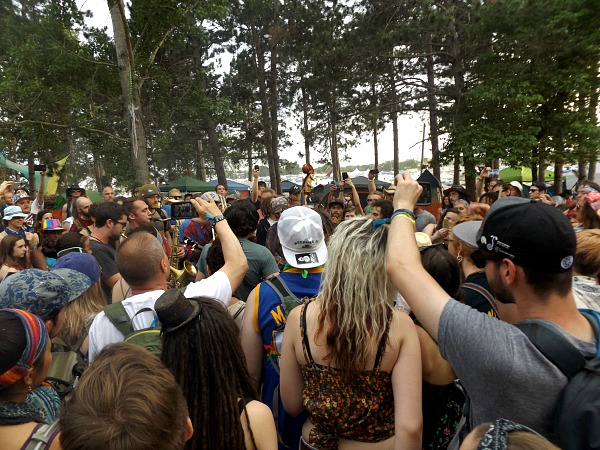 According to their website, they are beginning to make a name for themselves with this personal connection they make with their audience during these impromptu unplugged sets. They also sometimes jam at rest and truck stops on their tour routes. Below is a video from them performing at one of my favorite places – Starved Rock State Park.

I was delighted to hear that my new favorite band is from my hometown –  Chicago. They are opening up for Corn Meal on Friday at Lincoln Hall. If I do not go camping this weekend, you can bet that I will be there to see them, and if I miss them this time, I will be seeing them at Schuba’s in August. 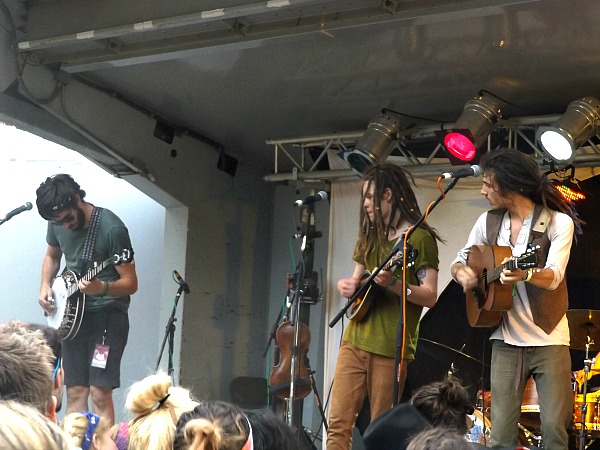 Summer Camp Music Festival featured some outstanding acts like Umphrey’s McGee, Moe., Widespread Panic, Bruce Hornsby, Keller Williams, Trampled by Turtles, and Greensky Bluegrass to name only a few. For me, it is The Way Down Wanderers that are playing in my head two days later, and I am thankful I caught their acts at Summer Camp and look forward to seeing them again.