Hiking out from McCargoe Cove in Isle Royale 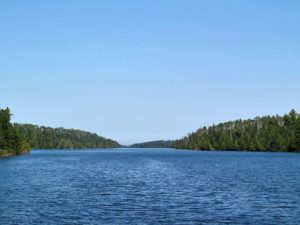 As noted in an earlier post, my Isle Royale trip was turning into not only a misadventure, but a debacle. Hot temperatures, a heavy pack, lack of sleep, and not enough water due to inadequate water filtration and depleted fuel resources due to too much boiling water put me in a fix. This all culminated at McCargoe Cove.

After a near sleepless night at Chickenbone Lake, due to a frenzy of mosquitoes buzzing non-stop in my ears around the mosquito netting, I headed towards McCargoe Cove. I had hoped to cover the whole island and back in 6 days, but to this point I had only hiked about 20 plus miles in 3 days. 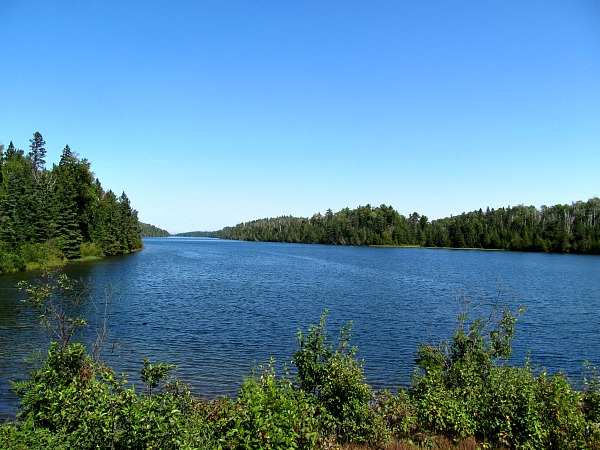 I headed towards McCargoe Cove on Lake Superior and then I was going to head west towards Todd Harbor and possibly even Little Todd Harbor. After the two mile hike to McCargoe’s Cove I was already exhausted. I knew something was wrong because I don’t care how heavy back is or how hot the weather is, I can hike more than two miles. 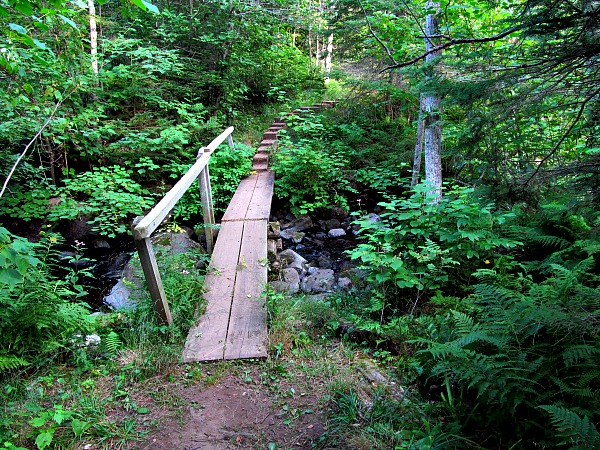 I have overdone it before on past hiking and canoeing trips. When you begin to over extend yourself, your body has effective ways of stopping you. On one trip into Quetico I was so exhausted I started throwing up and having diarrhea, fortunately not at the same time. After a day of recuperation I was fine. If I continued to hike I might break out with similar symptoms.

I knew I was going no farther than McCargoe’s Cove when I stepped into the campground. My legs felt like two bricks as I found a shelter and collapsed on the shady ground. I hunkered down here for two days resting and reading a book.

Despite the fact I was not feeling well, McCargoe Cove is a beautiful spot to relax and gain strength. I could look out over the cove from the pier all day. I had a decent shelter right near the water, and I was reading an enchanting book by Jim Harrison, one of my favorite authors. It turned out the book, The Great Leader actually took place in the Upper Peninsula of Michigan. 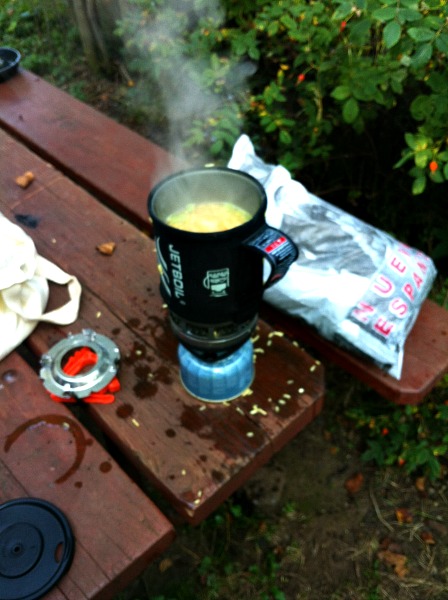 Running out of fuel due to too much boiling water

On the down side, I was running out of fuel because I had to boil water due to my steripen not working in Isle Royale waters. I had borrowed a filter at Chickenbone Lake from a nice couple named Jamie and Chris, but that supply was diminishing. I tried to boil some water over the fire, but one sip out of this smoky water set me to retching. 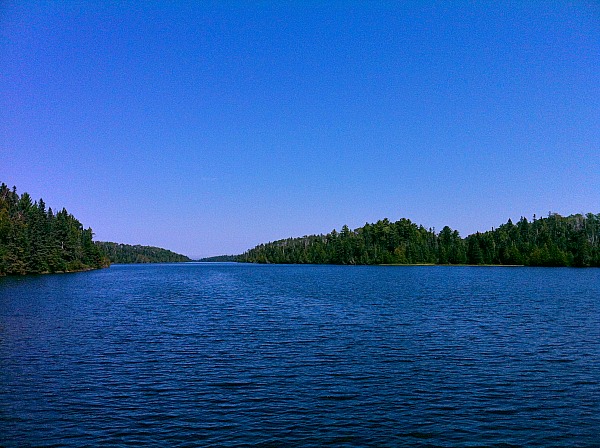 Just when I was down to my last drink, Nate and his group of six came charging into camp. I met them on the ferry on the way in and talked with Nate for hours about camping, fishing, and running marathons. They were sight for sore eyes. I borrowed their filter and loaded up my water carriers with fresh water.

I had two more nights left on the island. I decided I had had enough of the difficulties with the water. I was going to hike in the next day. After two days of rest I begun to get my legs back. At Rock Harbor there is potable water at the campsite. Only problem was it was 15.5 miles away. Only two days earlier I had problems with 2.1. 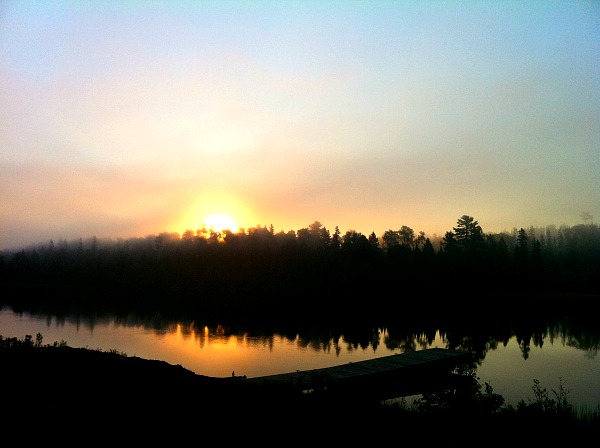 Sunrise at McCargoe Cove – Up at dawn to hike out

I woke up early when it was still cool and hustled out of McCargoe Cove. I still suffered from a too heavy backpack and it was still humid even this early, but I felt better and sailed through the first portion of my hike. I was hiking at a nice 3 mile plus clip. I wanted to get in fast as I only had so much water. 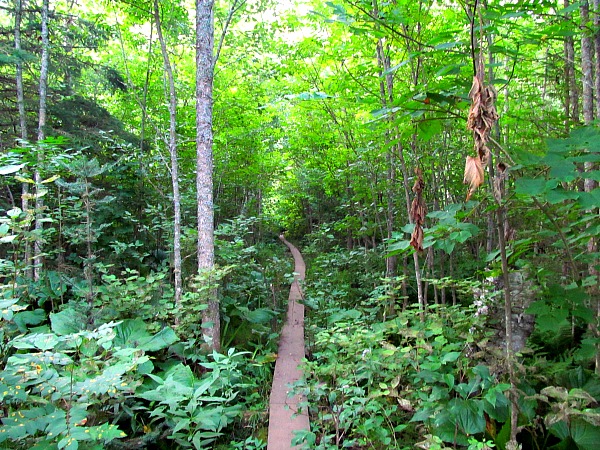 Hiking out in Isle Royale to Rock Harbor

Soon I was at Daisy Farm and only 7.6 miles away from Rock Harbor. Just east of Daisy Farm I found a little beach along Lake Superior. The last 7 miles were along the rocky coast on the Rock Harbor Trail. It is rare to find a beach along Lake Superior in Isle Royale. I waded in and for 15 minutes took turns taking dips. It was too cold to stay in too long, but when I did it was the most refreshing feeling ever. 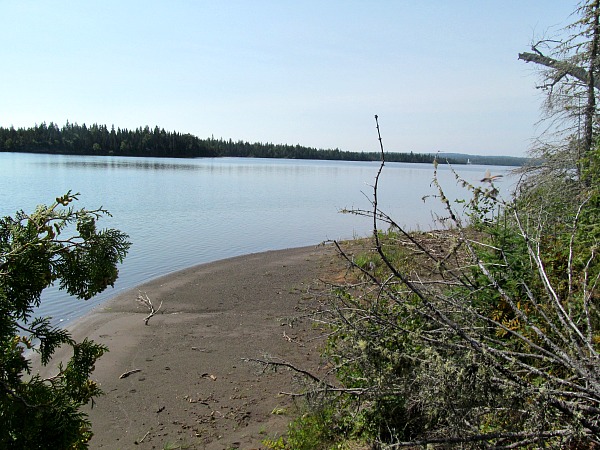 This catapulted me the rest of the way. Soon I was past Three Mile Camp, which is appropriately named as it is three miles from Rock Harbor. Soon I started seeing signs of civilization, and I made it to camp. The shelters at Rock Harbor were a welcome sight as was the water spigot. I think I drained a 32 ounce nalgene of crystal lite right then and there. 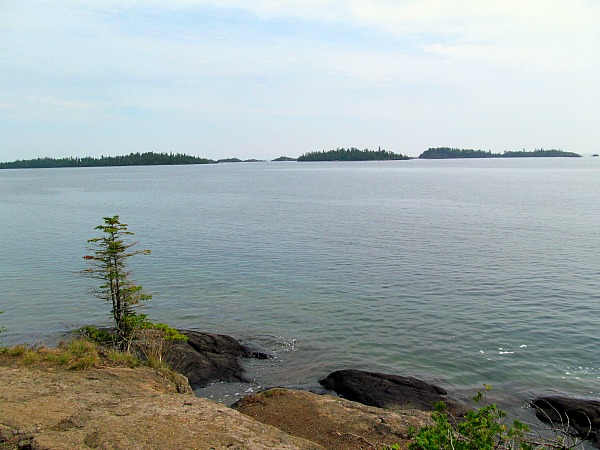 The best thing about getting into Rock Harbor early was there was a restaurant. I had a juicy steak with two IPA beers followed by blueberry cobbler along with glass after glass of precious iced agua. You never appreciate how great water is until you are a little short and it is hot. 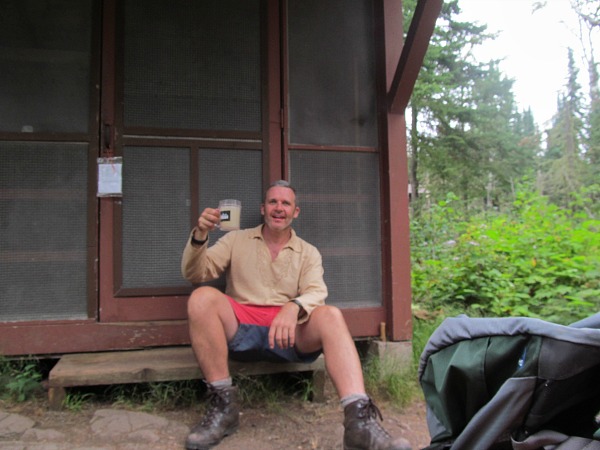 Despite the tough conditions, I am glad I was able to get one good 15 mile hike in and redeem myself after the poor planning and hot weather got the best of me. I awoke the next morning refreshed and ready for the ferry ride home although there was one more bright spot I discovered the next day before my 2:45 p.m. ferry departure, but that is a story for another post.