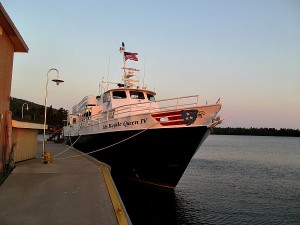 My first view of the Isle Royale Queen IV Ferry

Isle Royale is one of the least visited national parks in the system. This is due to its remoteness and inconvenience in getting there. Isle Royale is located in the middle of Lake Superior. You can only get there from a ferry, seaplane, or a private craft.

Loading canoes and kayaks while the good captain looks on

The embarkation points are from Copper Harbor, Houghton, or Grand Portage, Minnesota. These locations are kind of off the grid themselves and then you need to ride 3+ hours on a ferry across North America’s largest freshwater lake.

This assures no Griswalds make it to Isle Royale to take a picture of the park and leave like in the movie Vacation. The people who are hardy enough to make the trip tend to stay awhile and hike, canoe, fish, and camp. 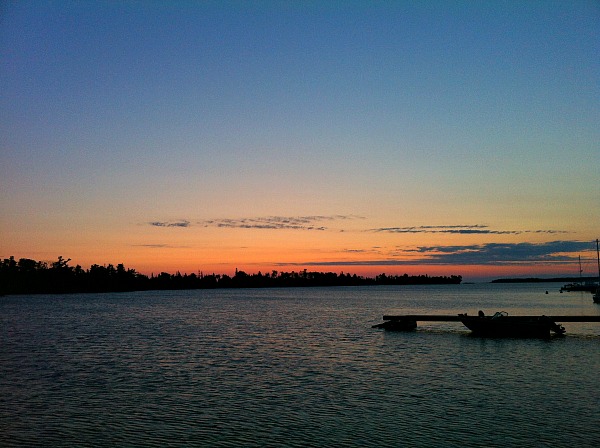 I arrived in Copper Harbor around 4 a.m. There was absolutely nothing open, so I used the time to rearrange my pack. After I did this, I drove to a public harbor just up the road and was treated to an unbelievable sunrise. My trip had not even begun, and I was already greeted with stunning scenery.

I then pulled into the parking lot around 7 a.m. They charge $5.00 a night for cars, but they cap it at $20.00, so if you are staying two weeks, you only pay a $20.00 parking fee. It is a little more expensive for RVs and cars with trailers. The parking is not secure, but the likelihood of someone breaking into your car in this little town is pretty remote. 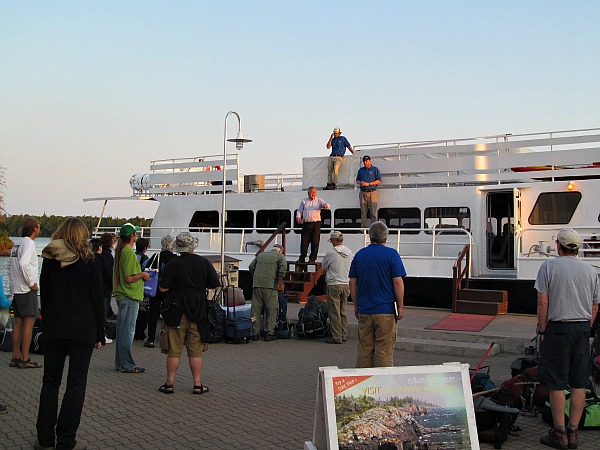 The captain giving us last minute instructions before loading

The captain then briefed us on how we were going to load. He wanted to load canoes and kayaks first. They cost $40.00 extra dollars to take along. Then we loaded backpacks one-by-one. After all the equipment was loaded we were able to board. You needed to check in at 7 a.m. and get a boarding pass. They have a list of your names, so it is not important to bring a printed receipt, although it is always a good idea to have. 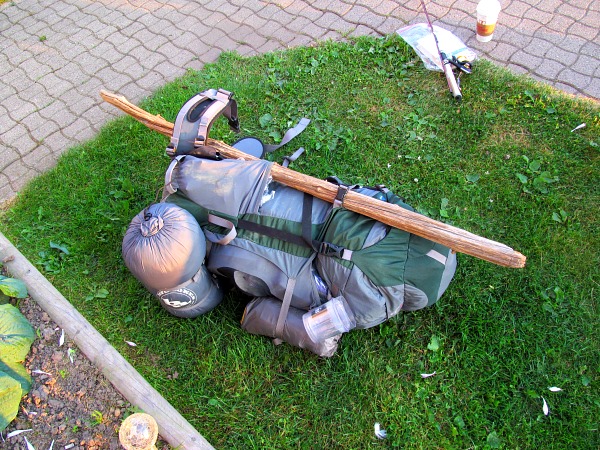 My pack awaiting to be loaded

The Queen IV did not mess around and it was anchors away promptly at 8 a.m. It is a 3 and a half hour trip from Copper Harbor to Rock Harbor, which is the main port in Isle Royale.

The trip back and forth for me was smooth sailing, but this is not always the case. I met a couple while hiking that arrived on the ferry the day after me, and they referred to the boat as the barf boat. They experienced high winds with 6 foot swells that caused a lot of people to throw up, so if you have a queasy stomach be sure to bring the Dramamine. They have plenty of plastic bags on hand in case of rough seas. 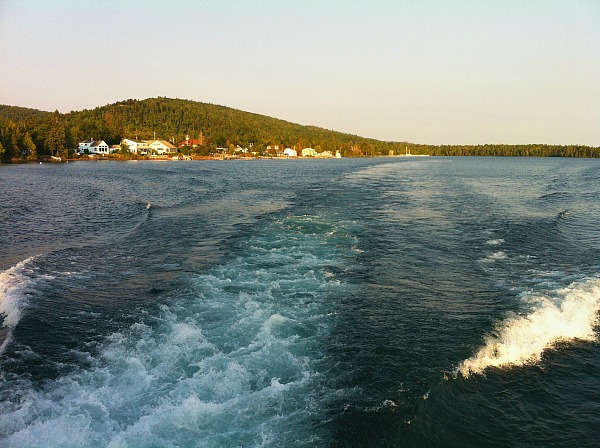 The accommodations on board are quite comfortable. They have padded booths inside and they have a room downstairs perfect for bigger groups to hang out in. You can also loiter along the sides as there are causeways on both sides that lead to the bow. There are great places to sit both on the front of the ship and the back. The only place that is off limits is up on top where they store people’s backpacks and canoes and of course the Captain’s quarters. 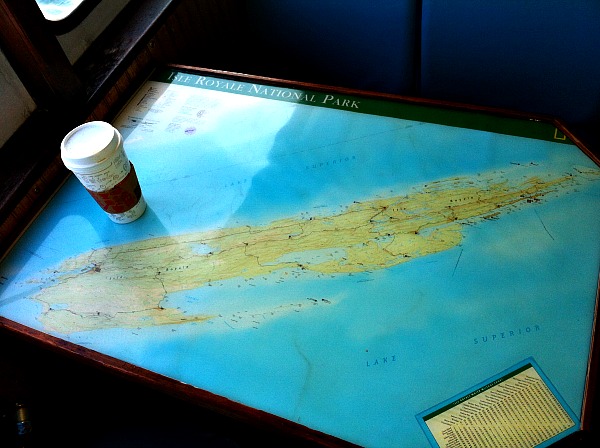 The best part of the trip is it is a great opportunity to talk with fellow hikers, canoeists, and adventurers. On the way there people are eager to get information and share itineraries. On the way back everyone enjoys telling their stories from their trip, trading moose and wildlife experiences, and reliving what was most likely a wonderful time in the great outdoors. 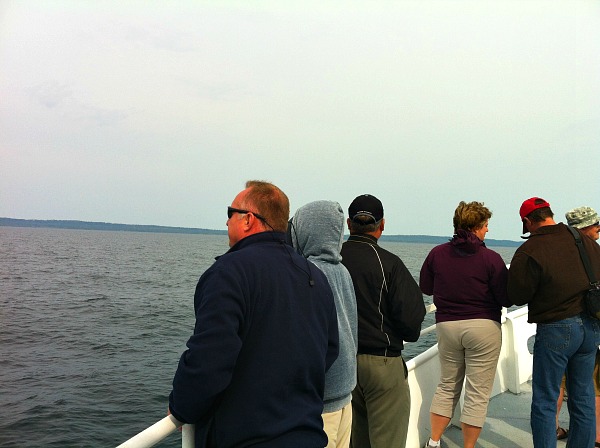 I met a group of 6 from Michigan that was on the boat out with me, then I met them on the trail, and then they were on the trip back with me, so I became pretty comfortable talking with them. One of the crew named Nate saved my rear end out on the island when my water purifier system broke down. Although it would be nice if Isle Royale was an easy drive away, the ferry trip adds character to the adventure. 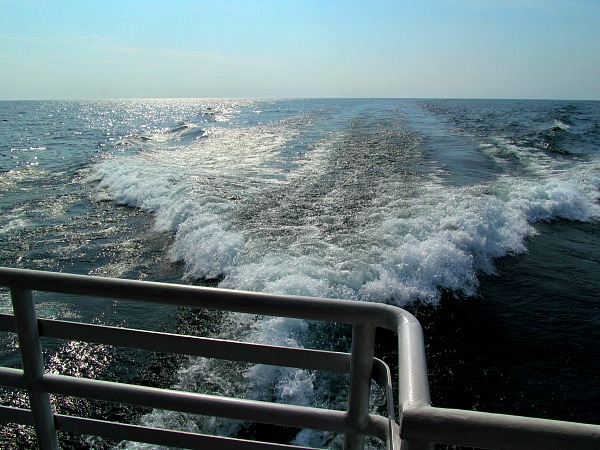 On the way back the Captain told us that although Isle Royale is one of the least visited parks, it is actually one of the most revisited parks in the system. Those that come fall for the fun adventure of being on a 50 mile wide island with nothing but moose, wolves, other hikers, and a mosquito or two. 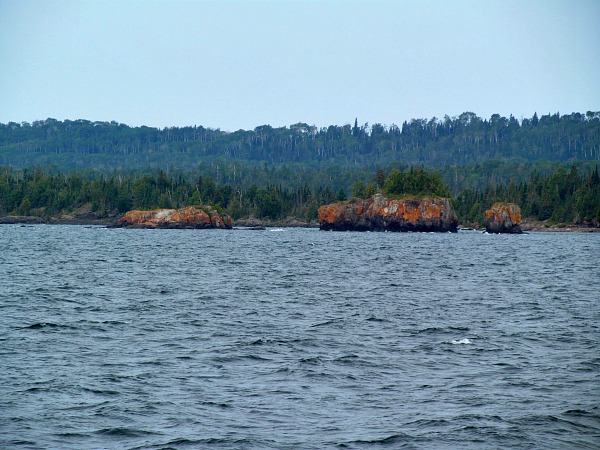 I could understand this phenomenon because on the way back as everyone was sharing their stories there was a lot of “next time I come, I want to go here,” or “next time I come I will be sure to have a good water filter” etc. . . etc. . . As I shook hands with the cool people I met on the ferry and waived goodbye to others I was already plotting my return. 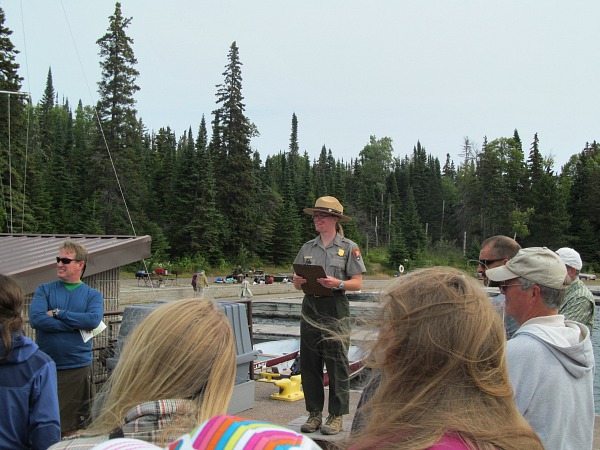