Puebla, Mexico Talavera Workshop Tour and the Stairway to Heaven 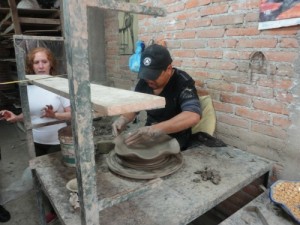 When we received the itinerary for the Puebla, Mexico tweet up trip I immediately scanned the schedule and mentally circled the items I was looking forward to. The visit to the Cantona Ruins perked my curiosity as did the mole poblano cooking class.  Who doesn’t love to eat great Mexican Food?

Beautiful shelf of Talavera work made at Santa Catarina

One item on the list did not elicit much excitement. The last day we were to visit the Santa Catarina Talavera Ceramic Workshop in Cholula. When I tried to picture what a tour of a ceramic factory might be like, I immediately felt like a diabetic with low blood sugar. Even the thought of the upcoming tour bored me to a near faint.

I tried my best to keep an open mind on the upcoming event. We tooled around the streets of Cholula for twenty minutes trying to find the place. I was somewhat hoping we would get lost and opt for a margarita instead.

Alas we pulled into the facility and were met by the proprietress.  We were led into a room with shelf upon shelf of beautiful ceramic products made here onsite.  The tour was led by Fernanda Gamboa who is the creative force and runs the workshop. 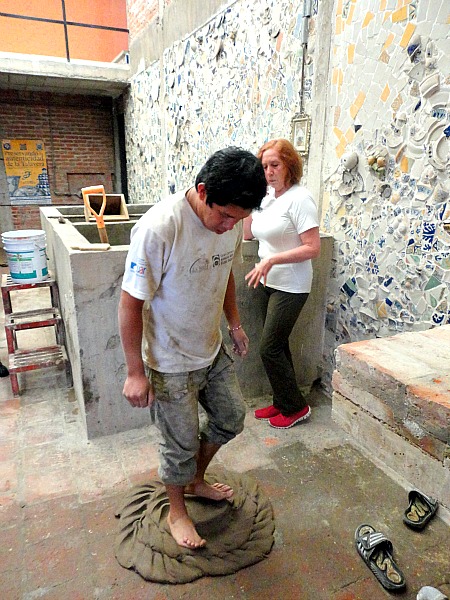 Talavera is handmade and feet made ceramics at its best

She must have took one look at my hat and realized I was not a ceramic aficionado because she succinctly summarized the history, the processes, and products made at this interesting workshop. She even stated that she did not want us to get bored as she led us briskly from room to room. 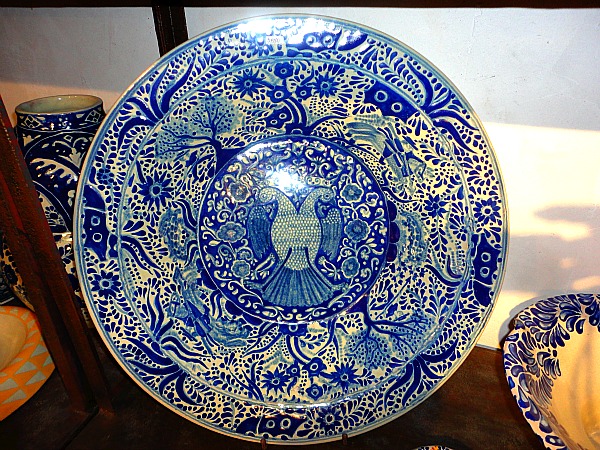 First of all, you are probably wondering what Talavera is. The technique has its roots in the ceramic techniques and works spawned from the Arab world which moved through the Mediterranean into North Africa and Europe. It then migrated to Mexico with the Spanish conquest in the 16th century. Crossbreeding occurred in Mexico, and Talavera molded with Pre-Columbian forms to make a unique style found only in the Puebla area.

We visited one room where a work in progress featured a beautiful tile of the epic classic rock song Stairway to Heaven. Talavera had me at Led Zeppelin. Now, not only was I not bored, I was rocking Talavera. 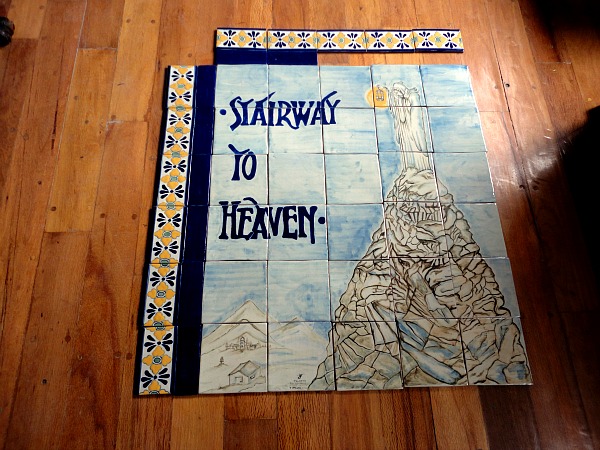 Talavera Stairway to Heaven for the Led Zeppelin fans

Like any good tour, it ended in the show room where we were free to buy. A coffee cup immediately grabbed my attention. I have a series of coffee cups from former employers. When I am sitting at home on a weekend enjoying some java, the last thing I want to be reminded of is work. Now I have a gorgeous blue Talavera ceramic cup from Puebla, Mexico to remind me of a wonderful trip.

The prices at Santa Catarina were very fair. My two coffee cups were around $15.00 a piece (I purchased a second for my mom). They also threw in a gorgeous tile of a heron like bird. When I paid with peso, they threw in a 10% discount for using currency instead of plastic. 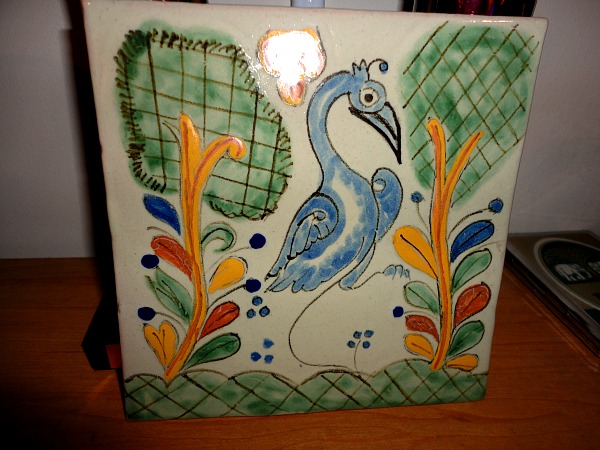 Going into the tour, I had preconceived ideas of immense boredom, but in the end I was impressed with the tour, the techniques, the history, and most importantly the Led Zeppelin. Many times people into adventure would never dream of taking a tour like this when visiting a foreign country. They and their mothers are missing out. 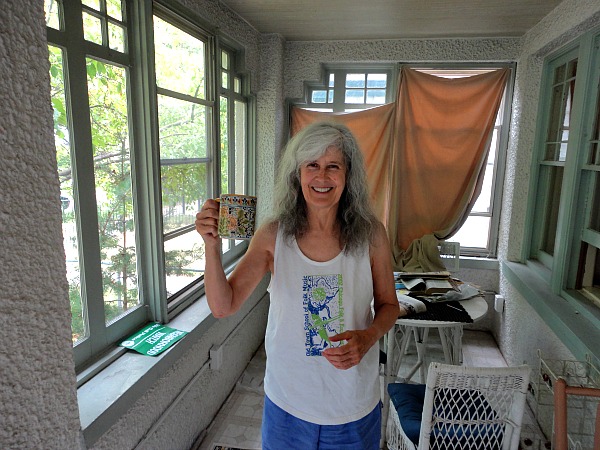 There is no official tour for Talavera Santa Catarina on their website, but they were very welcoming, and I am sure they would be happy to set something up for anyone interested in a visit. Cholula is only 15 minutes from Puebla and it would be an easy bus or taxi trip if staying in Puebla.

This trip was sponsored by the Mexico Tourism Board, but this post, opinion, and love of Led Zeppelin is purely my own.