Hiking the Olmec Ruins near Puebla: Yes you Cantona 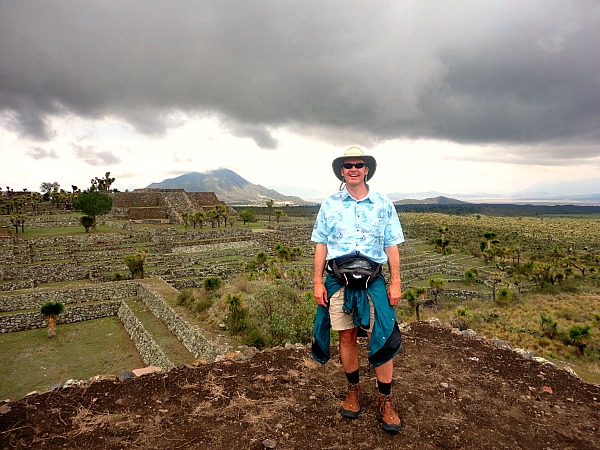 Standing on top of Olmec ruins in Cantona: a very old world

Cantona is the site of an amazing set of Olmec Ruins dating from 1,000 A.D. The vast archaeological site is situated about two hours northeast of Puebla, Mexico and about four hours east of Mexico City.

This former ancient civilization was eerily quiet when our group pulled in. There was not one other car in the parking lot. Nothing stirred except a couple of mangy dogs.

The area resembled something out of the desert southwest in the United States. I am no botanist, but I believe the orange wildflowers adding the only color to the dreary day and dry landscape was the penstemon flower. I had encountered the Utah variety while hiking the Grand Canyon. 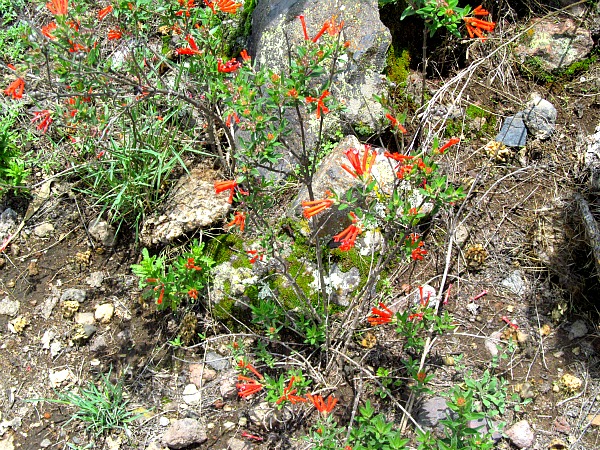 Hiking and climbing over Olmec ruins in Cantona, Mexico

We immediately climbed up a set of steep stone stairs. Once we reached the plateau, the ancient city came into view. There was no sign the area was of any interest to anyone from the parking lot unless you are a connoisseur of stray dogs. This changed as soon as we crested the first flight of stairs. From here you could see a series of walkways, pyramids, and courtyards that stretched out in front of us. In the background, clouds hovered over impressive mountains. 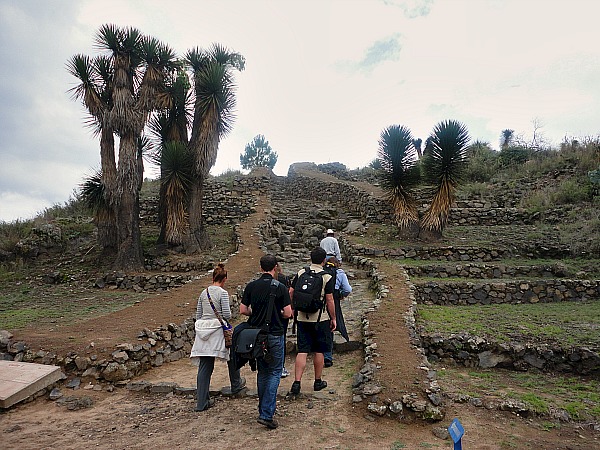 The scope of the ruins from this vantage point was impressive. What was even more incredible is that only 10% of this ancient city has been uncovered. I closed my eyes and tried to imagine a bustling city in this remote spot stretching out in the valley over 1,000 years ago. I always find it humbling to stand on a historically significant spot and try to imagine what it looked like way back then.

We approached one of the pyramids. There were several signs asking visitors not to walk in certain areas of the complex, but it was acceptable to walk up to the pyramid. Steep steps ascended up front of the square pyramid. 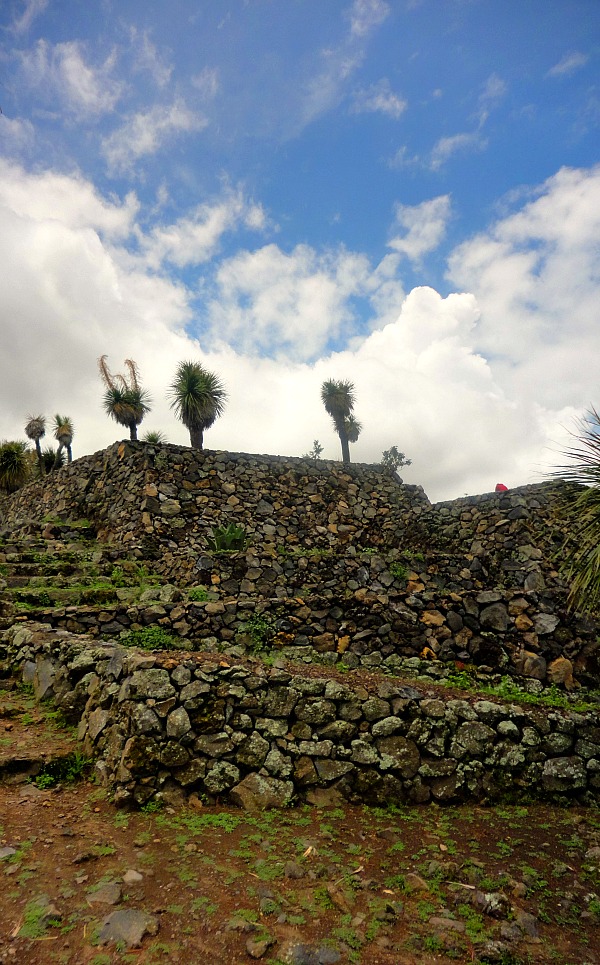 A view of the Cantona Olmec ruins and pyramids

Whenever I see an impressive set of steps, I can only think of one thing – ROCKY. I grew up in the 1970s and can still remember the intro with Sylvester Stallone running the streets of Philadelphia and then climbing up the stairs with hands raised to the sky.

When I looked straight up to the pyramid and saw the steps, the music started playing in my head. I took off and headed straight up the steps leaving the rest of the group behind. In seconds I was on top of the world on an Olmec Pyramid in Mexico looking out over the rest of the ancient city. I stretched my hands to the sky Rocky style. 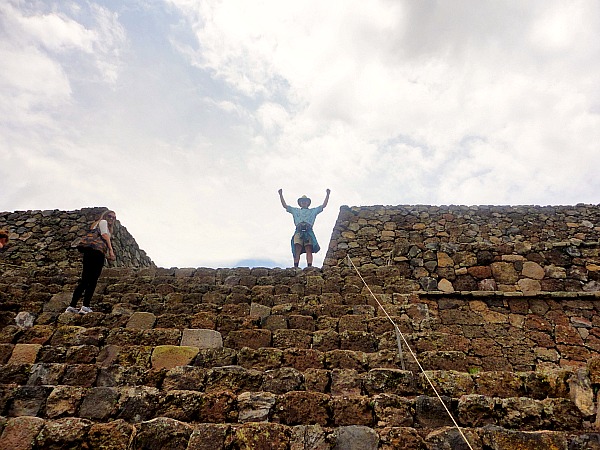 Getting strong now on top of an ancient pyramid in the Olmec ruins at Cantona, Mexico

When I looked around I put my hands down and stopped my silly antics and stopped paying homage to a fictitious boxer from the 1970s. This was because the view was so awe inspiring. The view from the first plateau entering the site was cool enough, but it really was something from up here. 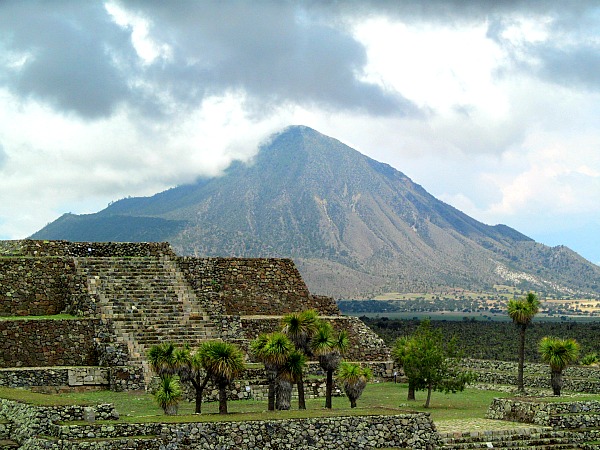 Awesome view from on top of Olmec ruins

We were at the center of the complex and looked down on the rest of the pyramids. The rugged countryside stretched out in all directions with distance plains, trees, and mountains. Interesting cloud formations covered and then uncovered the mountains in the distance. A storm was brewing, but that did not matter now. 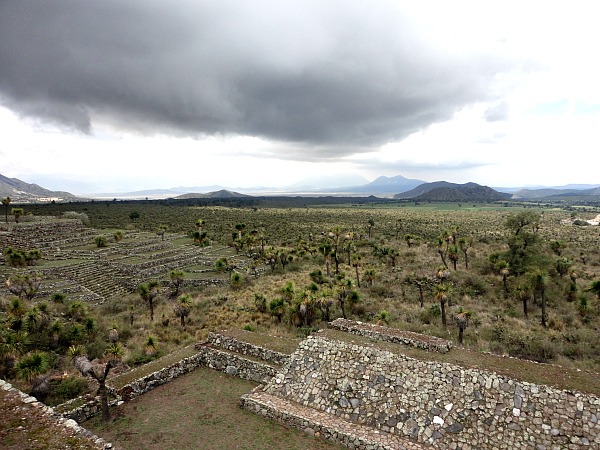 The surrounding landscape was just as spectacular as the Olmec ruins themselves, but together it was sublime 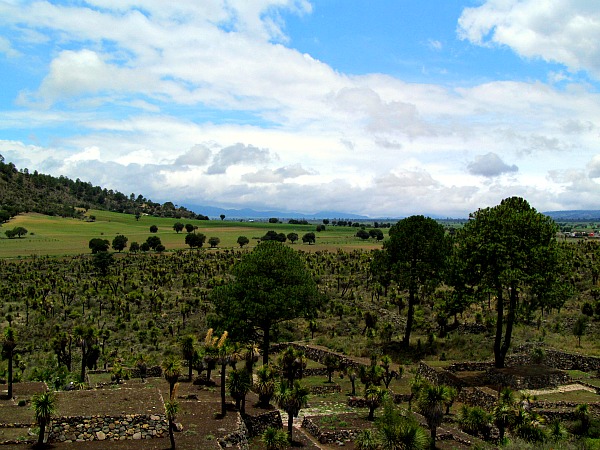 The jaw dropping vista from atop an ancient pyramid

The day was overcast and cool with a refreshing wind cooling us down. It was one of those moments that just made you feel good to be alive. Temperate weather combined with a great group of travel partners and 1,000 year old Olmec ruins are the perfect ingredients for a magical day. 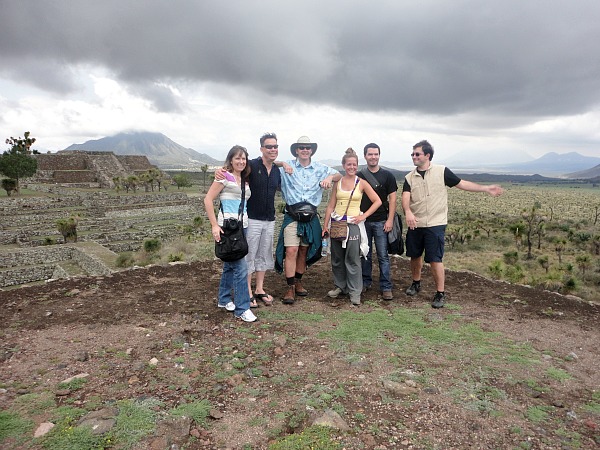 Yes, you can Cantona too. The best way to make it here is from Puebla. There is no designed tour from the city, but it would be easy to secure a cab for the day for around 500 pesos. To keep costs down, consider finding a travel partner to share the ride. The cost of the tour and entrance is reasonable or you could just walk the site yourself. Admission is less than 50 pesos (less than $5.00 usd).

One last look at the complex and surrounding landscape at the Olmec ruins in Cantona, Mexico

This trip was sponsored by the Mexico Tourism Board. The words, pictures, feeling, opinions, and Rocky imitations are purely my own.

I was not the only traveler along for the ride. Check out these interpretations from fellow bloggers on the trip to Cantona. If you are looking for a little more information on the civilization itself without the Rocky references, I recommend you click on one or all of the links below:

The Art of Backpacking