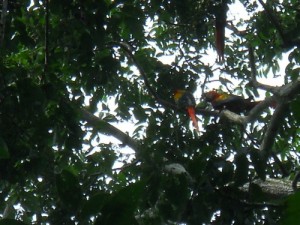 Decent shot in Corcovado, but I wanted better

A favorite food for the scarlet macaw is almonds. In Carate, which is a tiny town just outside Corcovado National Park in Costa Rica, there is a grove of almond trees in front of the tourist information building near the airstrip. Scores of these beautiful birds can be seen and photographed in this grove of trees.

Catching the flying macaw was an accident

Inside Corcovado National Park, I had seen many pairs of these amazing birds. We usually saw them in flight. A couple of times I was able to get beneath them in trees, but they were usually perched high up, and with thick vegetation in the way, it made it difficult to photograph.

On my way out of Corcovado, I got stuck in the tiny town of Carate for several hours (a story and a post for another day). While waiting, I enjoyed a few cold cervezas at the tourist information store. A coati (small raccoon like animal with a long tail), ran into the grove of trees and climbed a tree. Another person and I followed to see if we could snap a photo.

The coati got away, but once inside the grove I discovered the trees were full of scarlet macaws. These trees were short and planted in grass, so there was no other vegetation in the way. This enabled some great photos as the macaws ignored me as they were busy eating almonds. 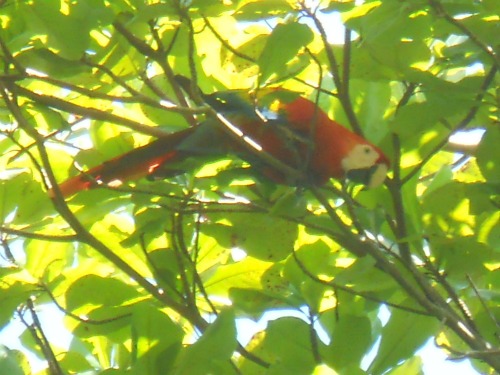 My favorite shot of the bunch occurred by accident. I was zooming in on the macaw at the top of the tree. When I snapped the photo I thought it had taken off. When I looked at the photo I realized it was another macaw that flew over the one I was focusing on. I captured the original macaw plus the aerial one just above the other one. 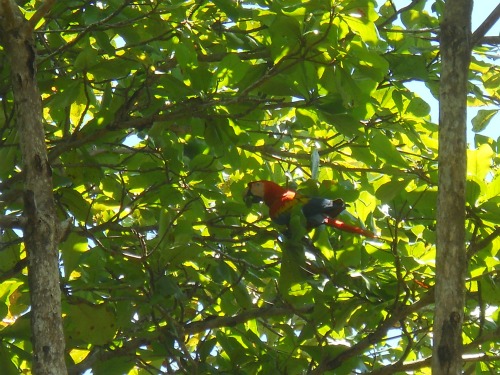 Caught in the act of almond enjoyment

Carate is merely a stopover for people hiking into Corcovado through the La Leona Ranger station. There is also an airstrip there where people can either fly into the Sirena Ranger Station in Corcovado or back to Puerto Jimenez. If you find yourself in this tiny little town, make sure to check out the almond grove for macaws before you pass through. There were ten in the middle of the day when I was there, and I was told sometimes there are between twenty-five and fifty later in the evening.