After 49 years of living, I finally enjoyed an Upper Iowa River canoeing adventure. Of all the places I have traveled, probably the area that I have explored and returned to the most is the Driftless Region in Wisconsin. I have paddled the Wisconsin, Kickapoo, and Pine Rivers easily over 50 times combined. 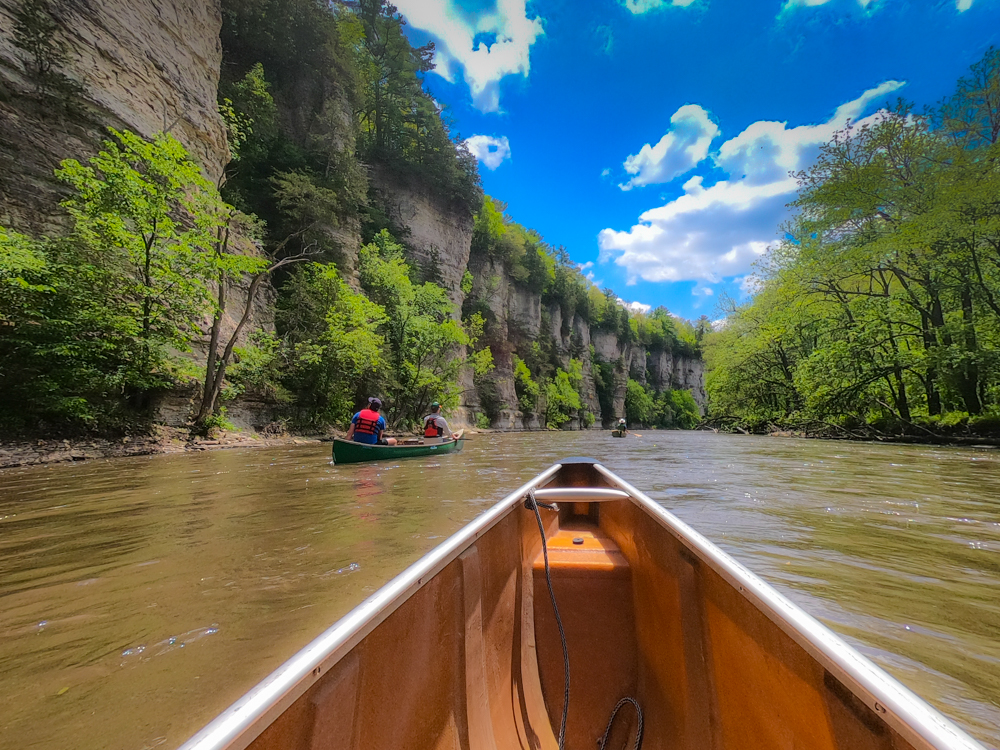 The Wisconsin Driftless Region is picturesque and close to Chicago; however, I have never once crossed the Mississippi River to paddle the other side of the Driftless Region or for that matter, any river in Iowa.

The last time I ventured out of state was for the American Birkebeiner ski Marathon in Hayward, Wisconsin in late March. Since the global pandemic changed the world, I have been limited to hiking forays in local forest preserves and Midewin National Tallgrass Prairie.

I drove out of Chicago with the song “here comes the sun” playing. It was a prescient lyric because it felt like two months of no sunshine in quarantine. 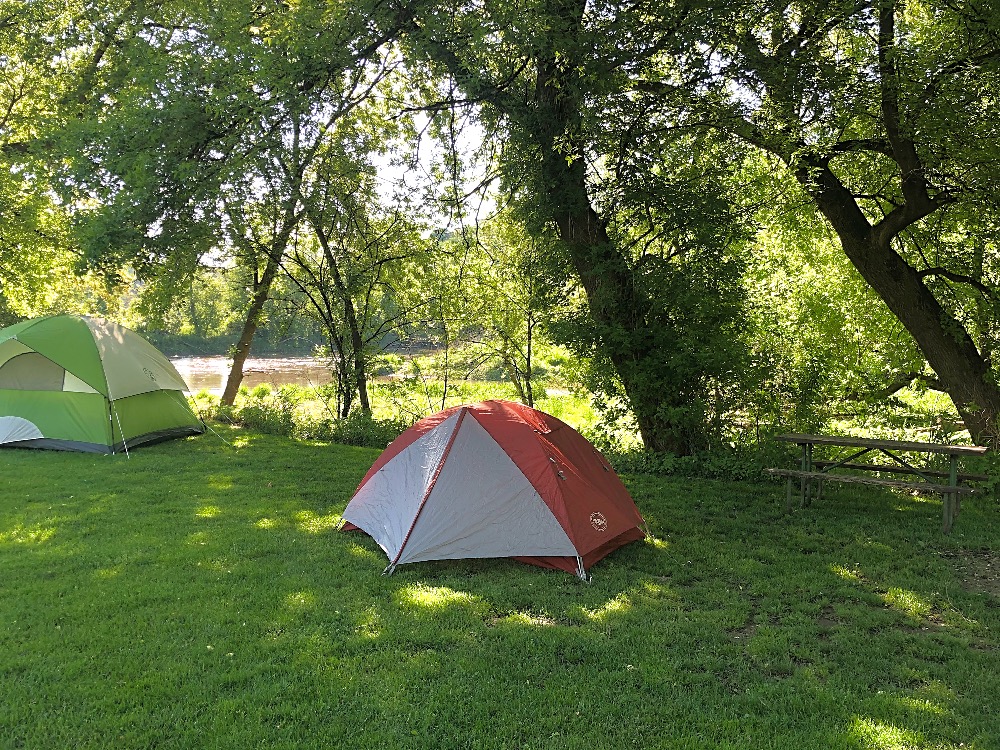 One of the last tent spots at Pulpit Rock Campground in Decorah, Iowa

I had to pick up my new/used Wenonah Encounter canoe in Fox Lake, so I got off to a delayed start. Unfortunately, all Wisconsin state parks were still closed, so I had to drive all the way to Iowa on Friday. After crossing the Mississippi at Prairie du Chien, I checked out Pikes Peak and the Yellow Forest State Parks, and they were no vacancies. I tried to reserve online, but this trip was a last minute get together.

Scott from Bull Moose Patrol texted me on Thursday, so it was too late to reserve online. Fortunately, I got one of the last tent spots at Pulpit Rock Campground in Decorah, Iowa when I rolled in at 1 a.m. I put up my tent from REI and promptly went to sleep after the long day. 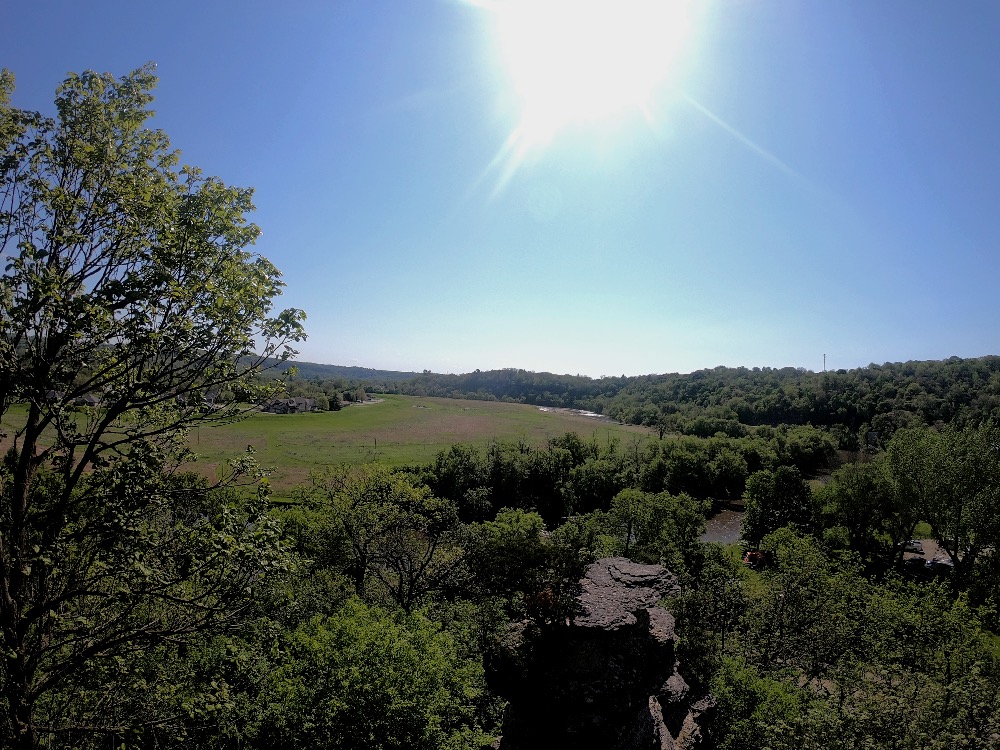 Climbed the bluff at the Will Baker park by the landing in Decorah to get this sunny shot of the Upper Iowa River valley as it flows through Decorah, Iowa

My morning reveille consisted of birds singing and the sound of the Upper Iowa River churning in the background. My camp spot was close to the river tucked away on a grassy section next to a copse of woods. The plan was to meet up with BMP at Hutchinson Family Farm just outside of the Decorah city limits.

On the way there, I got pulled over by the police for rolling a stop sign. I luckily just got a warning. The police officer said he paddled Quetico and complimented me on my canoe. 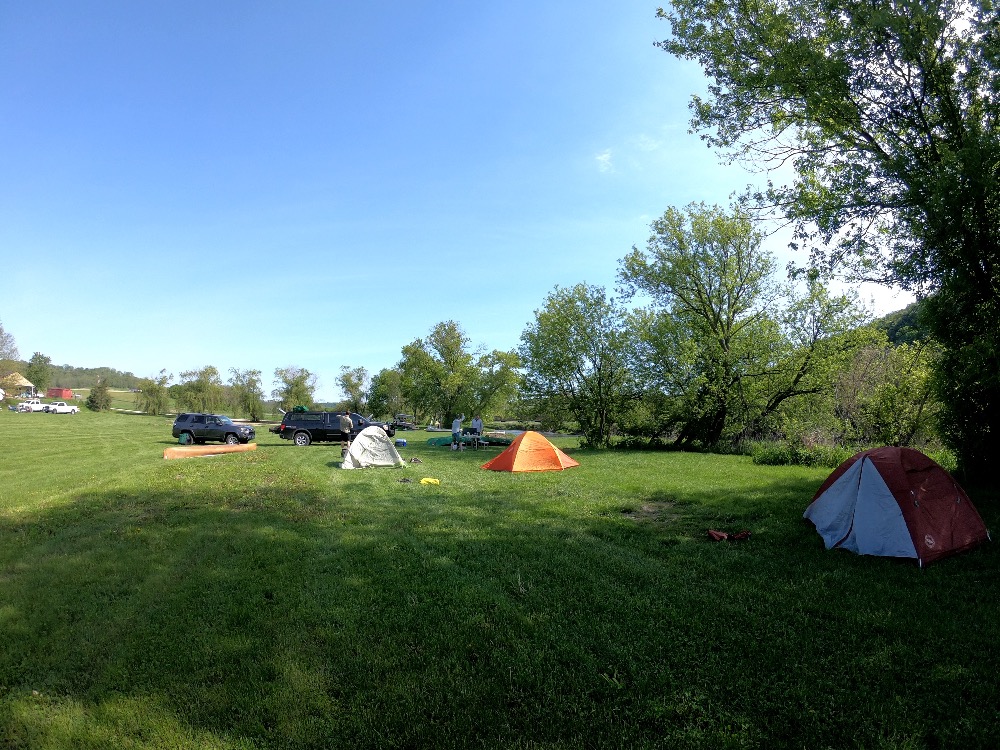 Campground at Hutchinson Family Farm near Decorah, Iowa. This was also the take-out for day 1

The rendezvous with Scott, Justin, Andy, and Bernard took place at the campground. We kept the trip small to promote social distancing. Once I pulled in, we pitched our tents and set up camp. We decided to paddle Chimney Rock to Bluffton the first day.

The perk of this stretch is we actually ended at our camping spot, so we just had to drag our canoes to our camp and then drive back to the put-in to the get the vehicles. 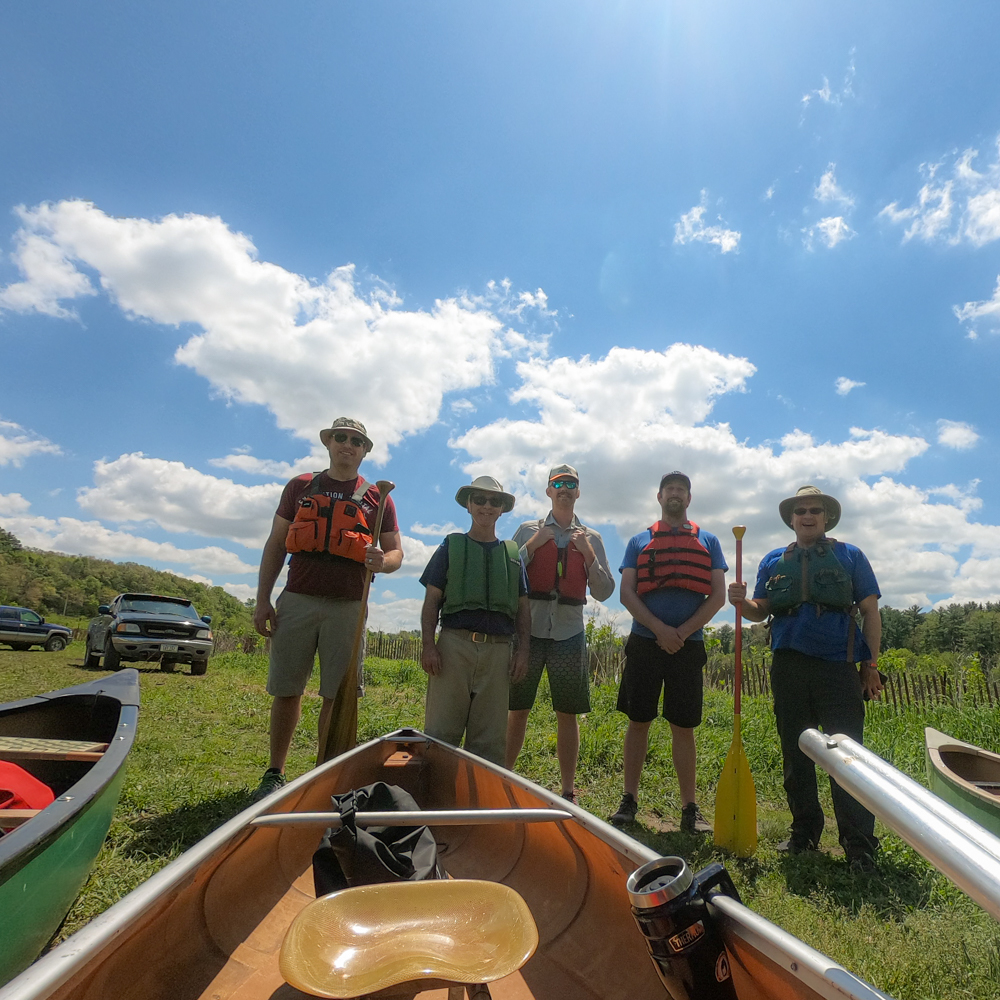 We could not have asked for a more stunning weekend to paddle. The weather was ideal. Warm and sunny in the upper 60s lower 70s without a hint of humidity accompanied by white billowy clouds. We lucked out on the water level as well. The Upper Iowa River conditions were slightly high, but manageable. 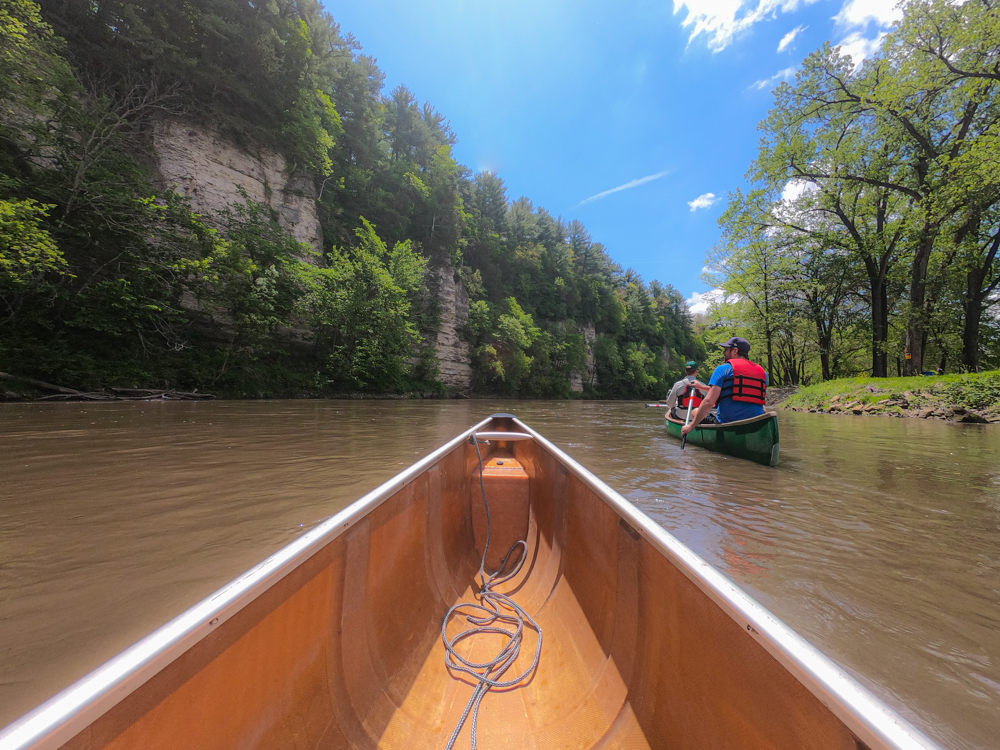 Bluffs begin at once on the Upper Iowa River

Scott and Bernard brought canoe poles, and I did too, but my poling experiment lasted about two minutes. The Wenonah Encounter is not designed for standing up especially in fast water. I felt unsteady standing up, so I took a seat and grabbed my paddle for the rest of the weekend. 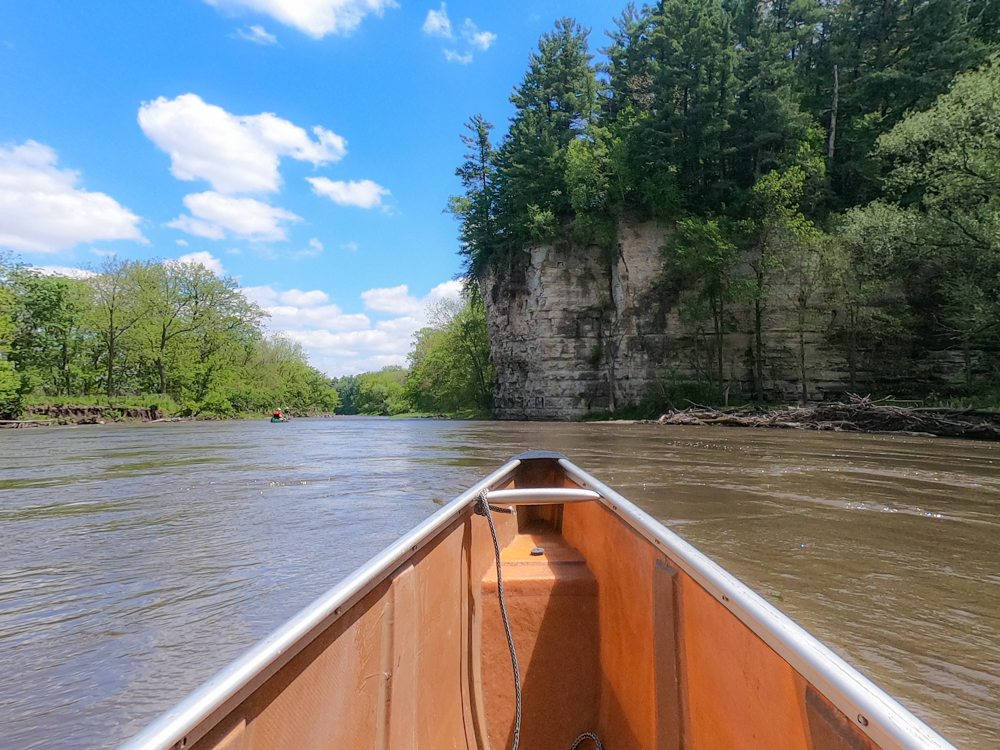 The bluffs on this section of the Upper Iowa River were spectacular. I felt like I was on the Current or Jacks Fork River in the Ozarks except for the lack of crystal clear water. This stretch of the river was just as scenic as the Kickapoo River out of Ontario. 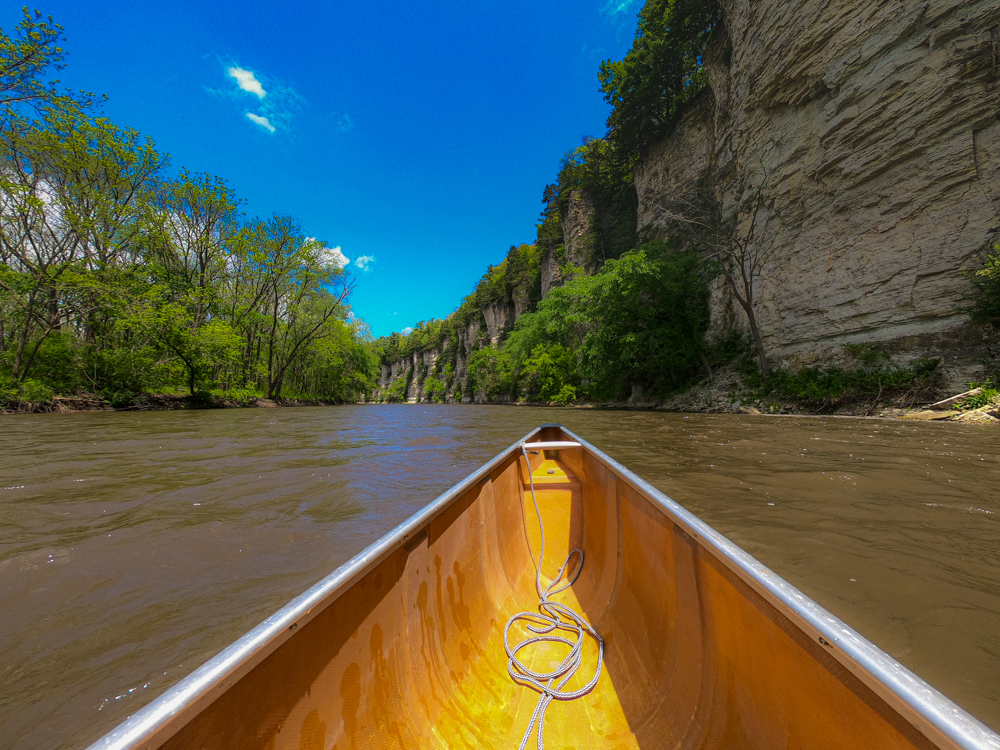 Turned around on this stretch to catch the bluffs with a different light. The river was flowing so strong, I could not make much headway upriver.

I spent a considerable amount of time taking GoPro pictures and videos as each bluff and cliff was as stunning as the first. Upper Iowa River kayaking is more popular than canoeing, which was evident in the number of kayaks appearing on the river, but it did not detract from the experience.

The river was flowing so fast that when someone did pass us or we passed them, it was a quick hello and then back to solitude. The campground at Hutchinson Farms was not too crowded either. 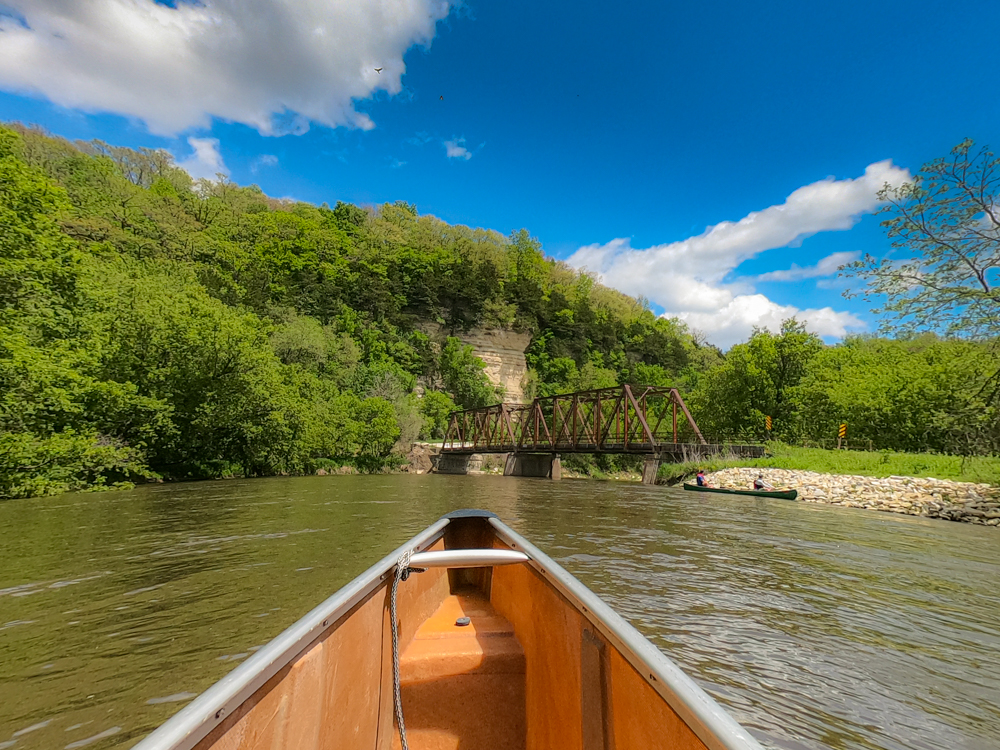 We saw this amazing scene, and we made the wise choice to stop below the bluff. 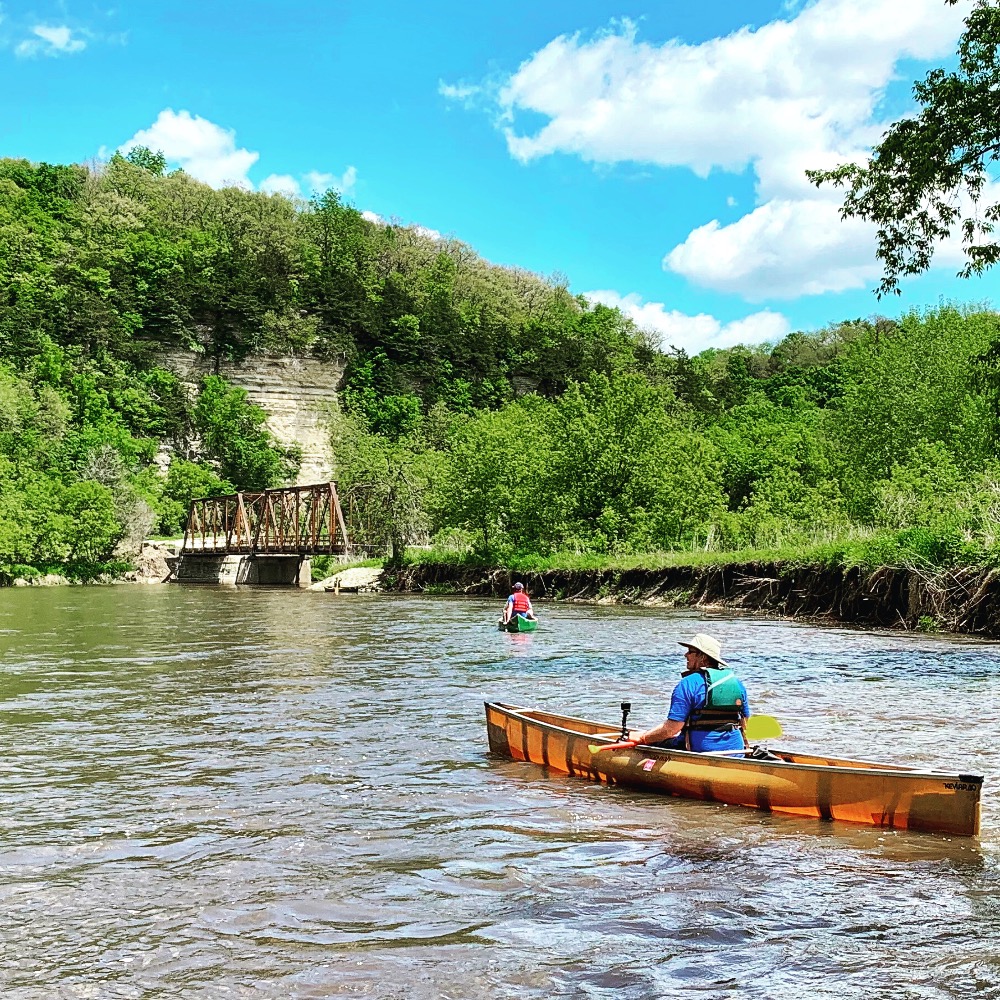 Thanks to Bull Moose Patrol for this beautiful picture 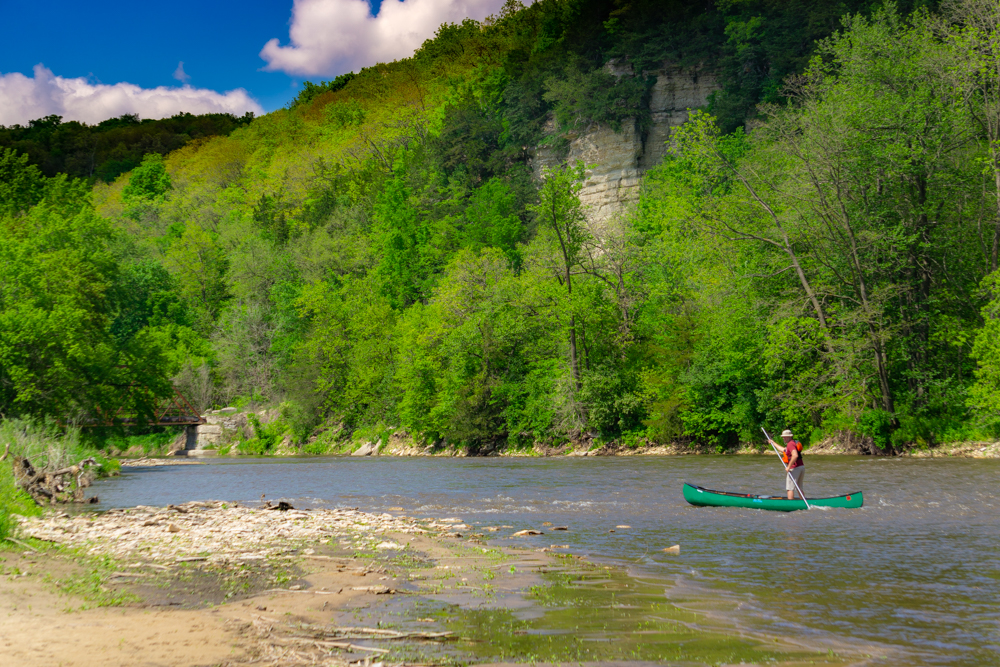 Lunch and relaxation below and bluff and bridge

We found the quintessential lunch spot on the other side of a bridge below a pleasing bluff. We chilled on a gravel bar while Scott and Bernard played in their canoes poling upstream. I normally would have joined the festivities, but I was very comfortable drinking a beer and sitting on a chair soaking in the scenery. 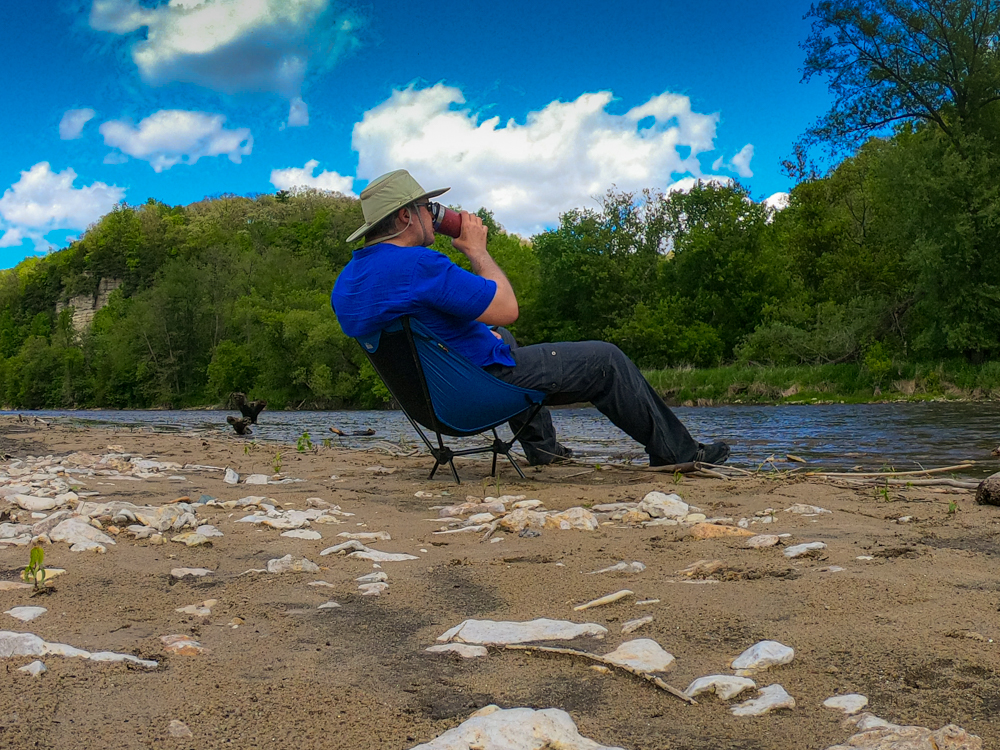 Relaxing on a gravel bar soaking in the scenery

There are many Upper Iowa River access points to consider. On day 2 we started farther downstream from and put in at the Lower Dam after traversing many gravel roads outside of Decorah. We were fortunate enough to have the muscle of two twin boys push us in at the put-in. We decided for a short stretch on the river as the Bull Moose Patrol crew had to return to Minneapolis, which was raging in protest. 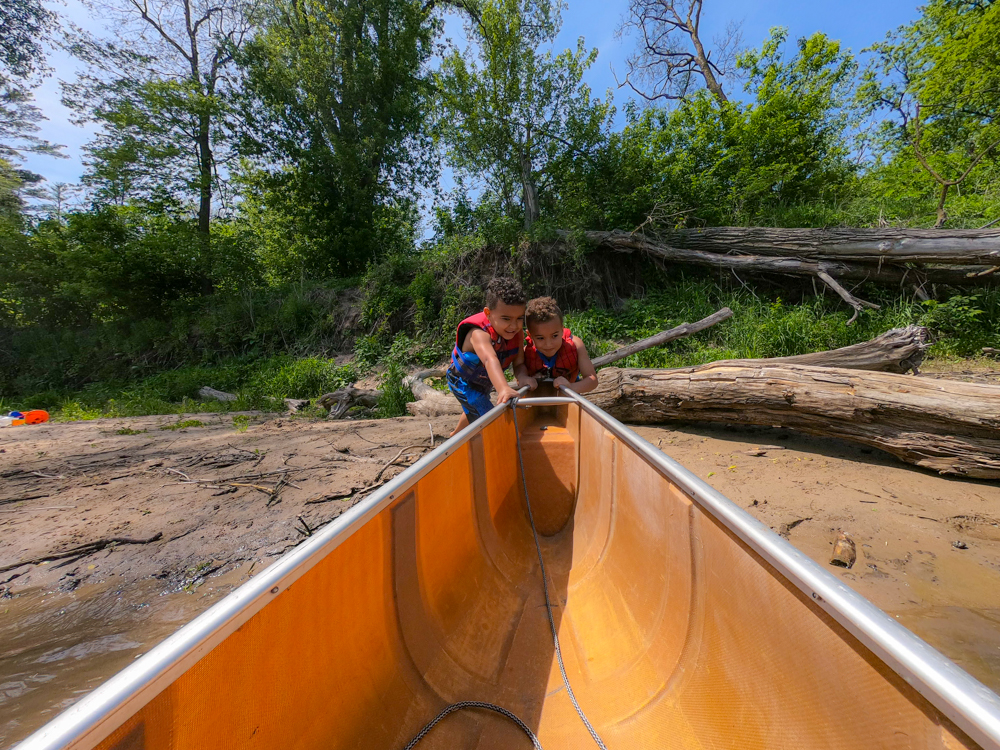 Got some outside muscle to help with the put-in

This part of the river was not as outstanding as the first day as far as bluffs and cliffs, but it was much quieter as far as boat traffic. I don’t think we saw a single canoe on the river. We saw people at the put-in and take-outs, and a fisherman along the banks, but other than that this stretch seemed remote and peaceful.

The scenery was a mixture of wooded shoreline and farm fields, but it was mostly forest. There were bluffs, but not with the eye dropping rock faces from the day before. We were surprised to see a fair amount of pine trees, especially on the first day’s stretch, along the river. Some of them were remarkably giant. 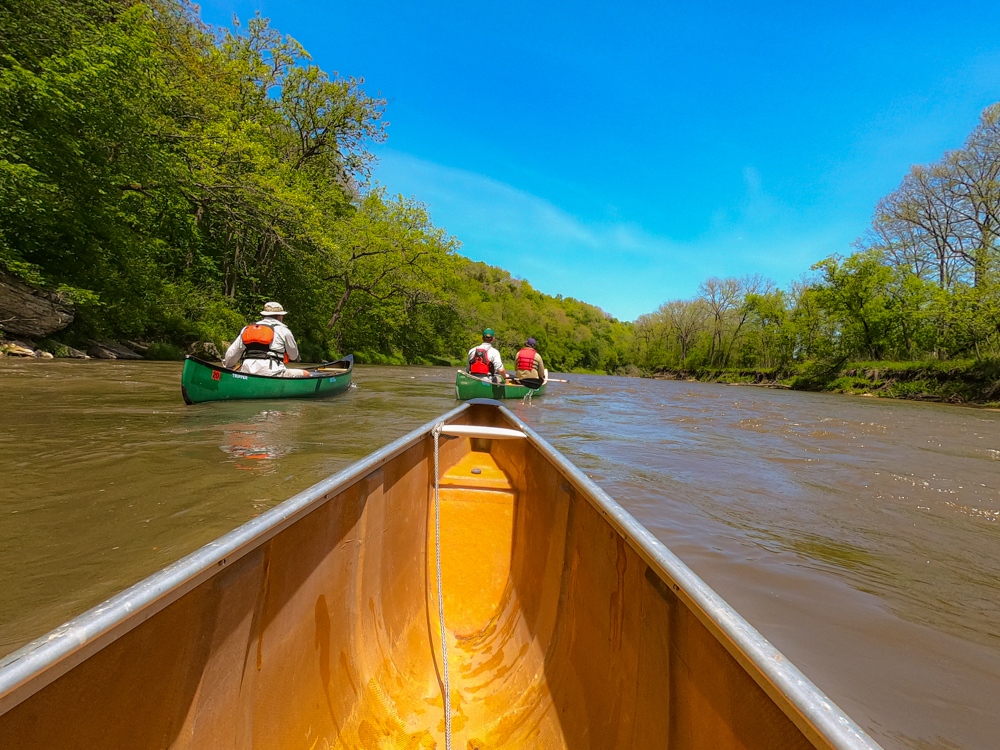 The wildlife highlight was bald eagle accompanied by their nests. We saw one eagle nest per day. We also saw several white-tailed deer, mostly while driving to and from the river. Red-tailed hawks and turkey vultures meandered through the thermals above us scanning for prey. 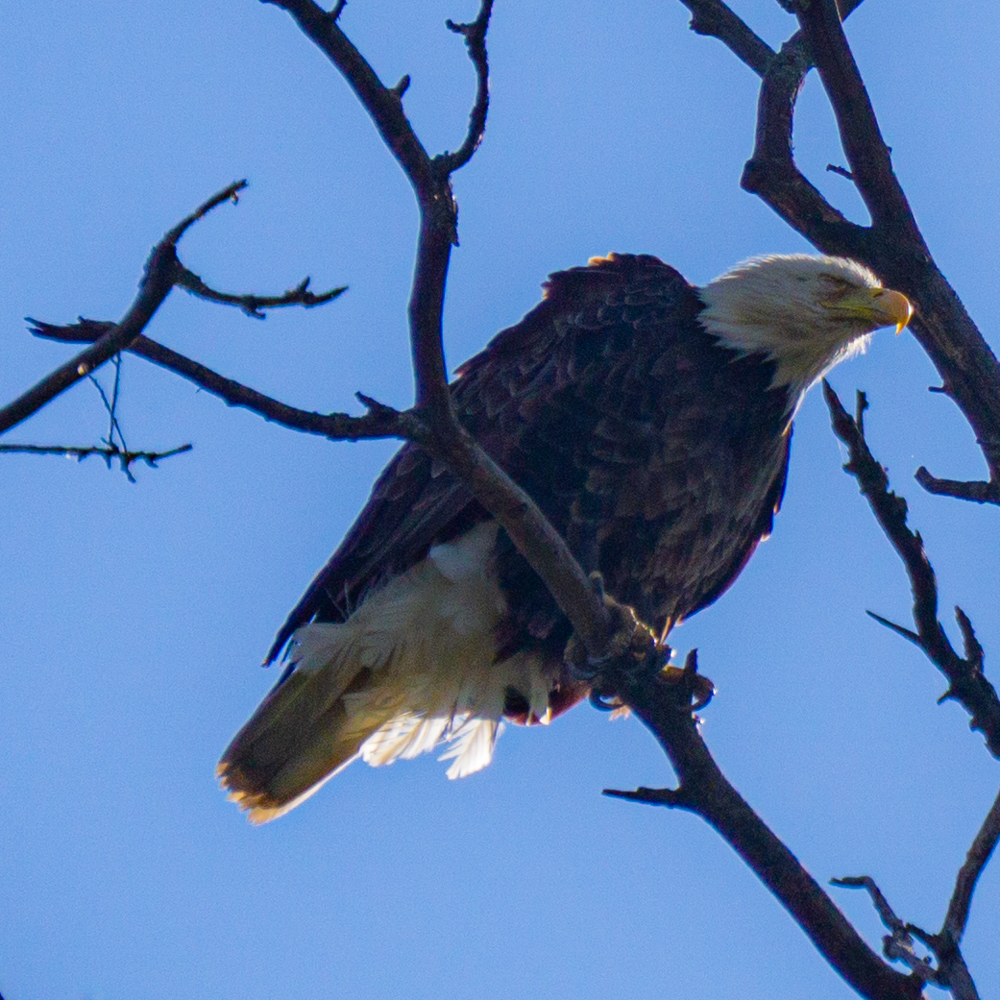 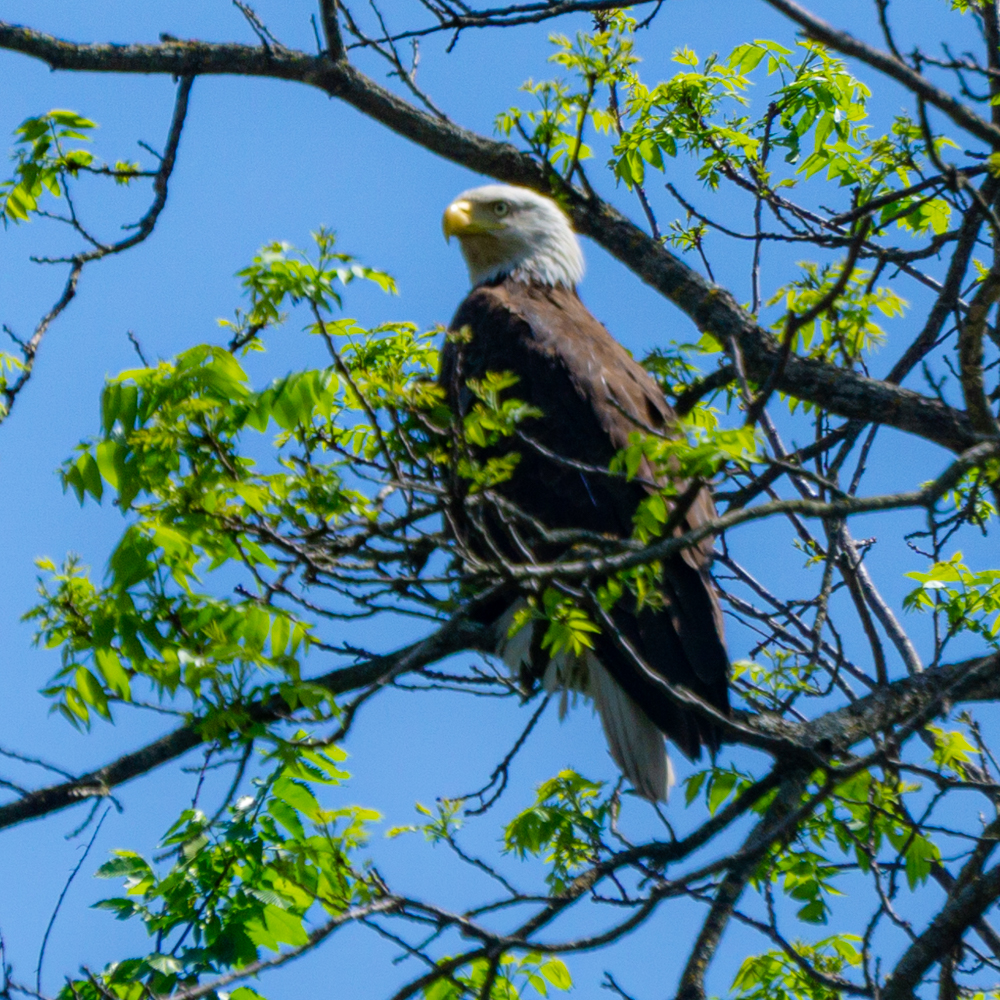 Soon enough, my Chevy Trax came into view as we rounded a bend in the river. We packed up and said our goodbyes and returned to our cities roiling in protest. It was nice to take a break from the world of pandemic and rioting during a gorgeous weekend in Iowa. My first ever adventure camping and canoeing in the state.

I would remark that Upper Iowa River float trips are suitable for novice paddlers. We did not encounter any significant rapids higher than class I. In fact, I am not sure I would even label it that high. Due to the water level, we coasted over all rifles.

Some decent standing waves at times appeared in the bows of our crafts, and one logjam that took some maneuvering, but other than that it was pretty much flat water.