I have skied the American Birkebeiner or affectionately known as the Birkie five times, I have also competed in the Great Bear Chase, and the Gatineau Loppet in Canada. One race that has eluded me until now is the Noquemanon Cross-country Ski Marathon in Marquette, Michigan. This race is located in the Upper Peninsula. 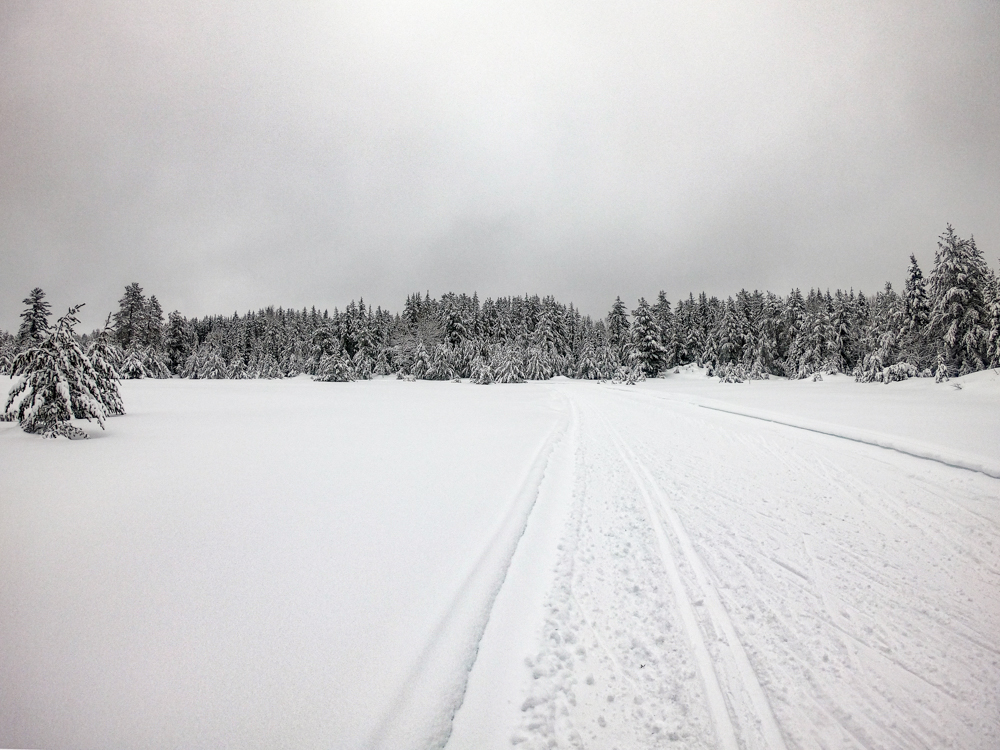 The Upper Peninsula is near and dear to my heart. My first outdoor adventure happened in the Porcupine Mountains when I was nine years old. I have since returned here several times. The Upper Peninsula served as a springboard for exploring one of my favorite national parks – Isle Royal. 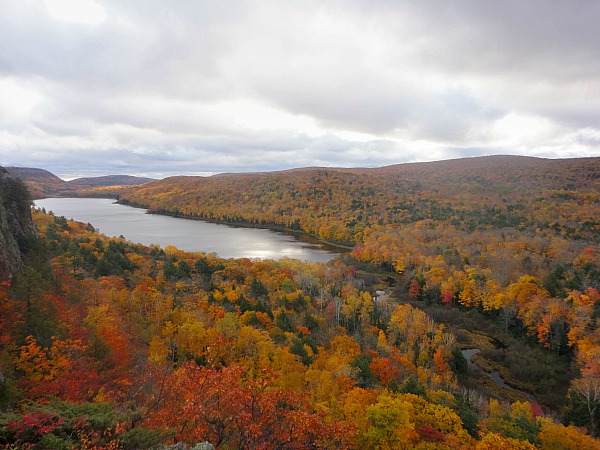 Lake of the Clouds in the Porcupine Mountains

The city of Marquette is also special to me. I worked there as a summer intern for the Southwestern Company between my freshman and sophomore years in college. I sold educational books door-to-door while taking up residence in the community in 1990. It was an extremely difficult job working excruciating hours and dealing with nonstop rejection, but I loved the people and the community of Marquette.

Since it is home to a cross-country ski Marathon, I felt I needed to return to a place that once felt like home when I worked here. Thanks to Travel Marquette and the Noquemanon Ski Marathon, I recently made happen.

I picked up my bib on Friday at the Superior Dome while imbibing in a 51K IPA beer from Black Rocks Brewery. The Noquemanon is a 50 kilometer race, so I guess it is one more kilometer to the post race bar. Alpine skiing does not corner the market on apres ski activities. 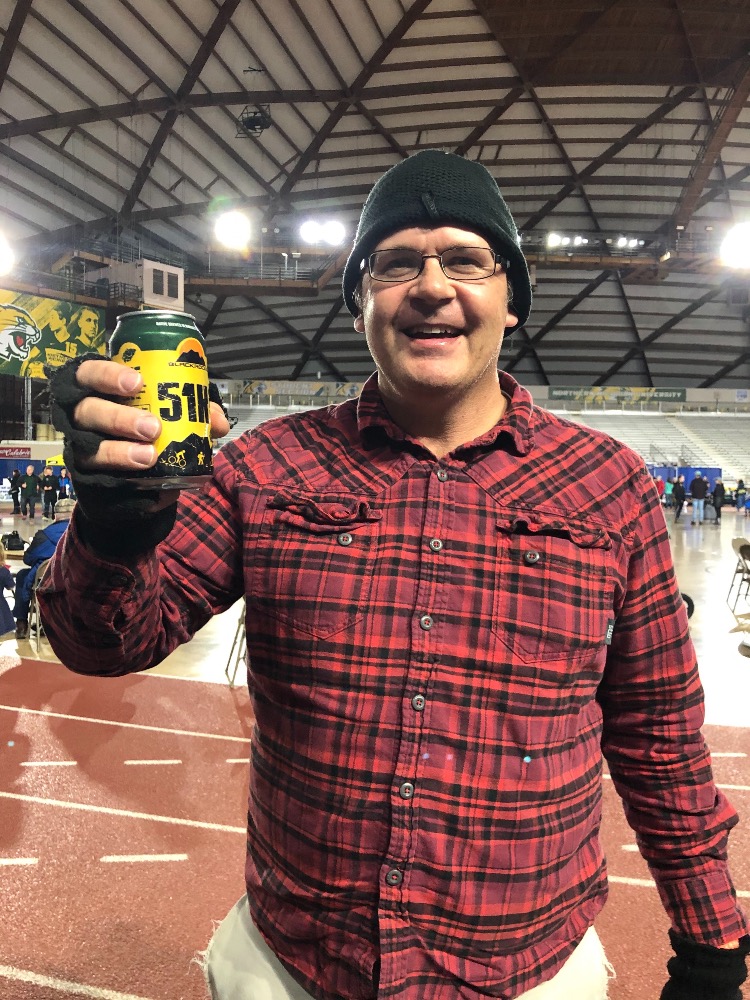 The next morning six inches of heavy wet snow coated the already impressive snow mass. Ironically, the instrument needed to even allow the sport can sometimes turn to overkill when there is too much of it. On the bright side, at least it was not freezing cold.

The 30 minute drive to Marquette took 45 minutes. I pulled into the parking lot for the Superior Dome and a bus was waiting. Buses transport skiers to Ipsheming where the race commences. 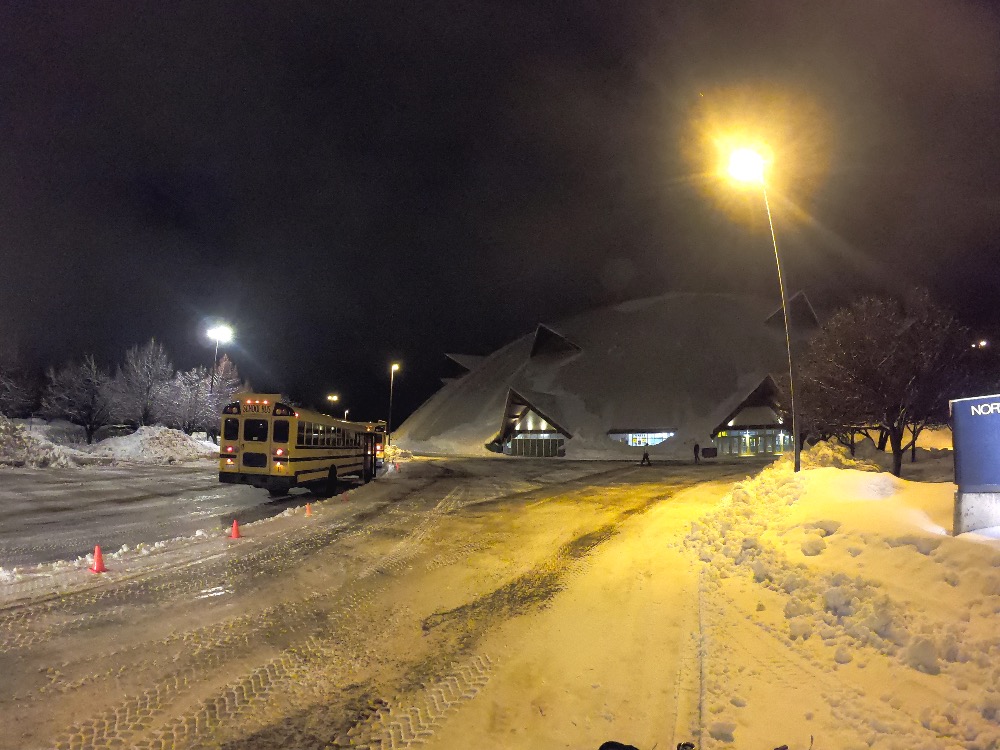 Easy logistics at the start of the Noquemanon. Easy parking at the Superior Dome and the bus was right there.

Wax on at the starting line

I spent most of the time when the bus dropped us off at the starting line applying kick wax. This was the question of the day. There is no real good wax on a day like this. In fact, many skiers were going with skin skis, which are non-waxed skis, which I am not too familiar with. 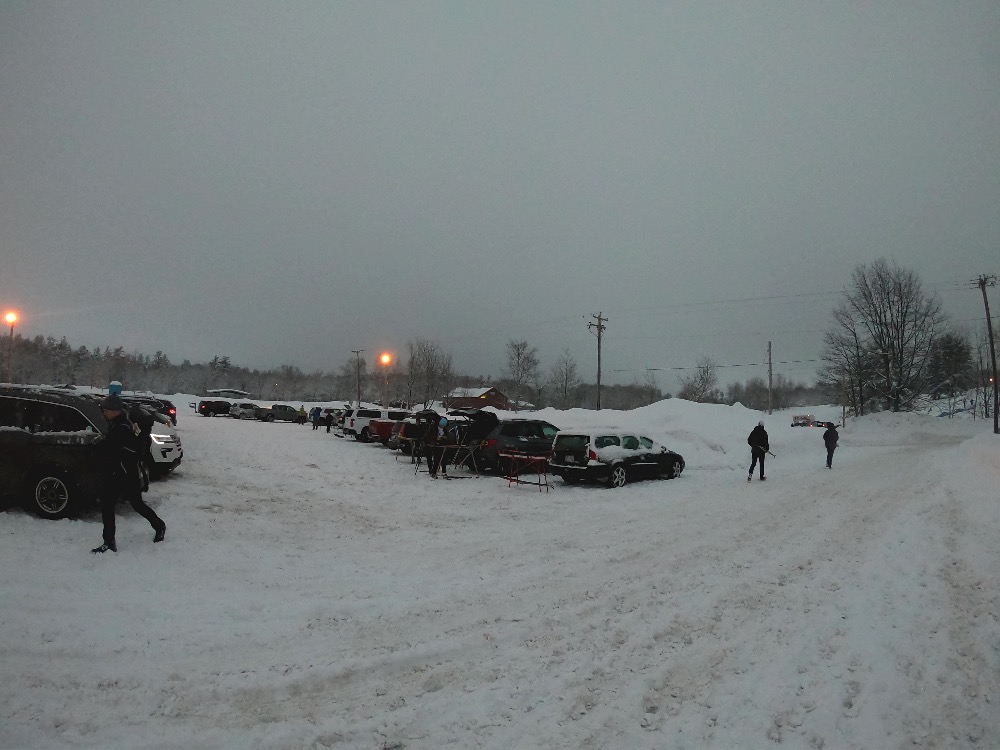 Skiers waxing at the Noquemanon Cross-country Ski Marathon at the start in Ipsheming.

Soon, my wave was called, and I got my skis on and headed over to the starting corral. As soon as my skis hit the snow, I just about completely stopped and almost fell as the snow was super sticky. I was afraid this was going to be a long day, and I might not even be able to finish if I went at a slow as molasses rate.

The great thing about skiing the Noquemanon, is the course goes through some private property, so this is the only time of the year these parts are open for Nordic skiing. Other parts of the trail are always open for recreation. It was a cool experience skiing through the Upper Peninsula wilderness.

The scenery was outstanding. There was probably over three feet of snow on the ground and with the new batch the night before, all trees were covered with a thick coating of snow. 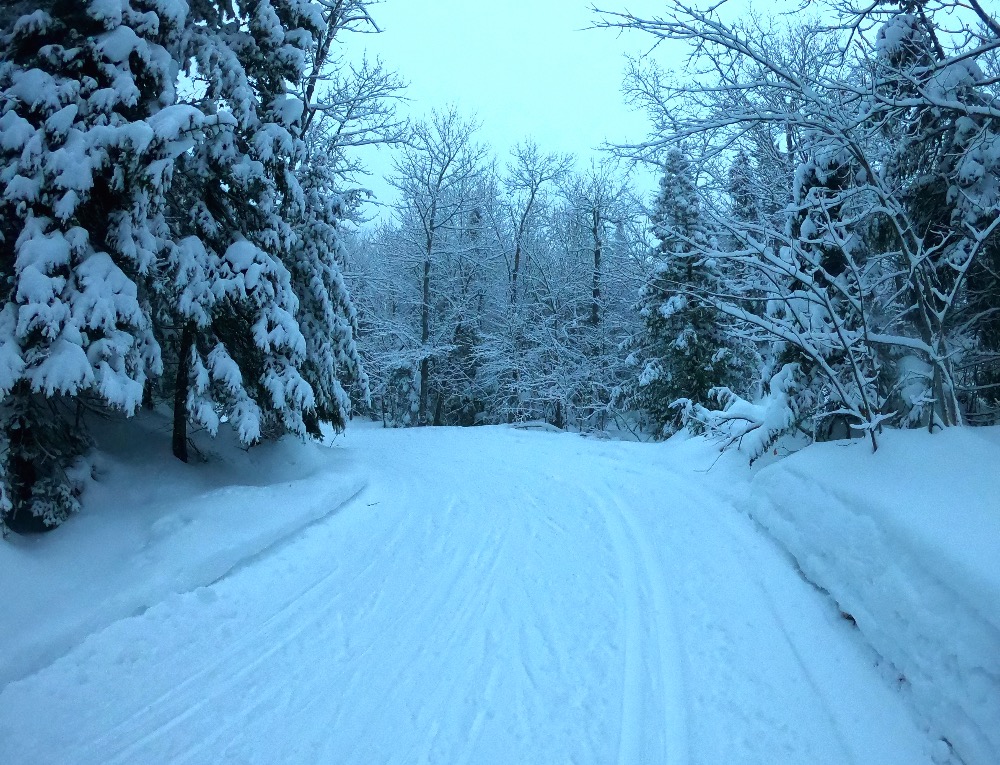 The trail conditions were for the most part, as good as can be expected. It was slow going at the start, especially on the uphills. Snow tends to stick more going uphill for some reason.

It is then necessary to kick off the snow before heading downhill. A couple of times, I started downhill before getting all the sticky snow off my skis.

This created a problem as I got up to a decent speed going downhill and then some of the remaining snow still on the skis would cause resistance, and I tumbled forward. It is really frustrating to crash when you feel like it is not your fault. Although, who else can you blame? 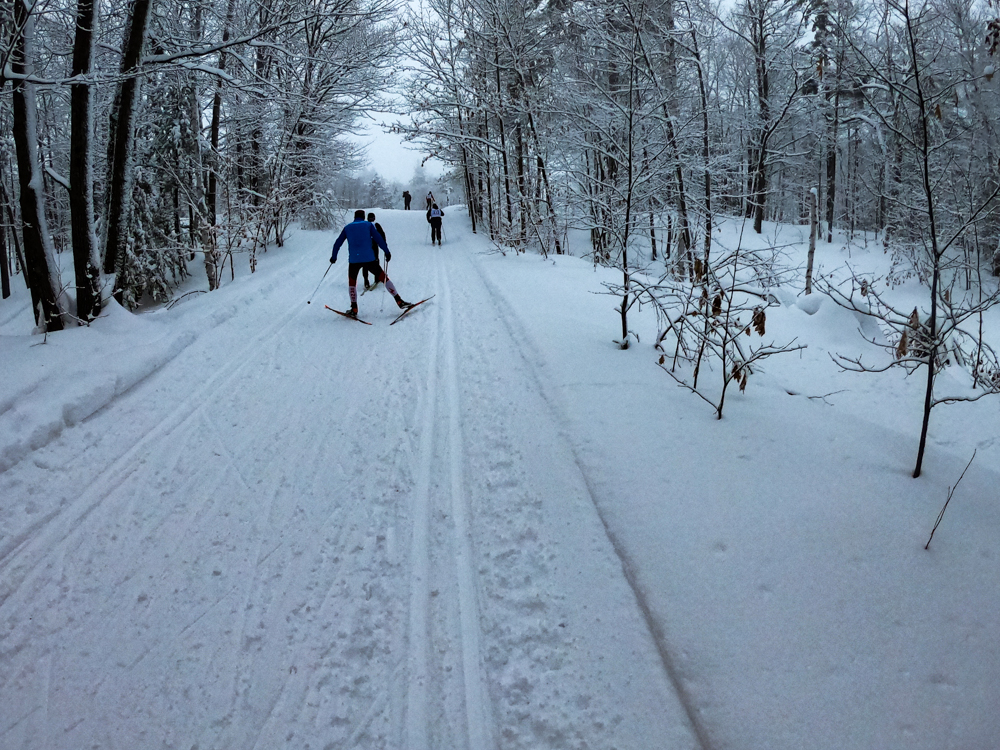 The first station with food and water was at the 11K mark. Volunteers braved the winter conditions to help skiers stay hydrated and full of energy.

I asked if they had any 11K IPA, but was told I needed to wait until the 51K mark. This was little disappointing. Black Rocks brewery would really rock if they had an IPA for each aid station. 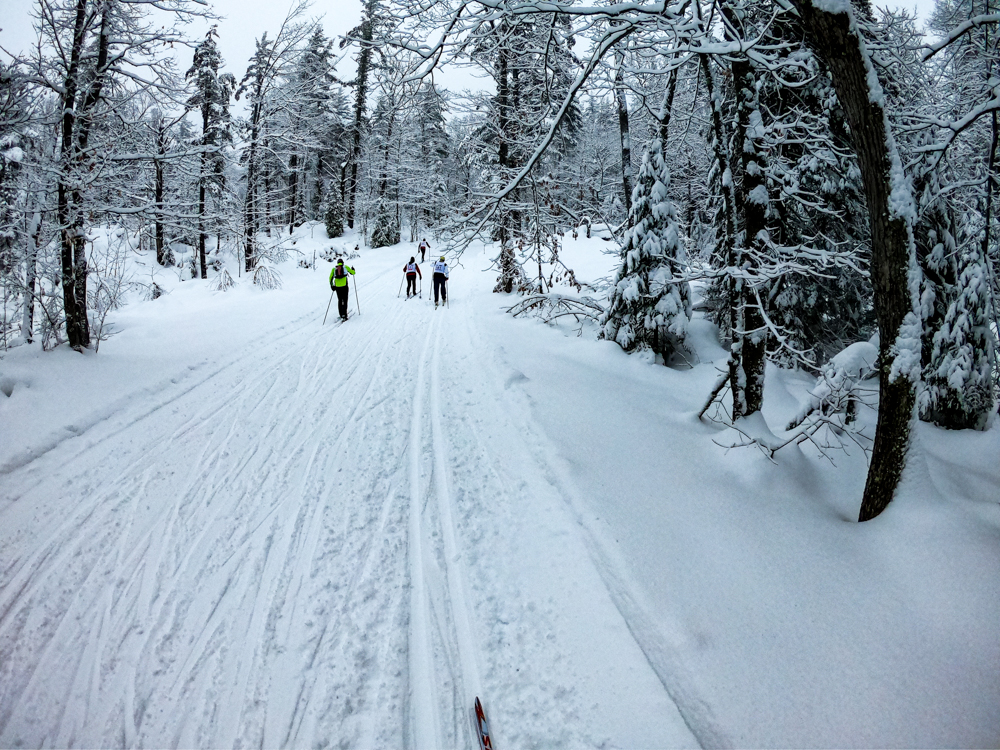 For the first ten kilometers, I had the course to myself. I intentionally started off in back since I was taking so many pictures; therefore, everyone in my wave was way in front of me. Secondly, I was not in peak condition, so I was using this race to get in shape for later races and to just enjoy the experience. It was surreal being alone on the course as this would never happen at the Birkie. 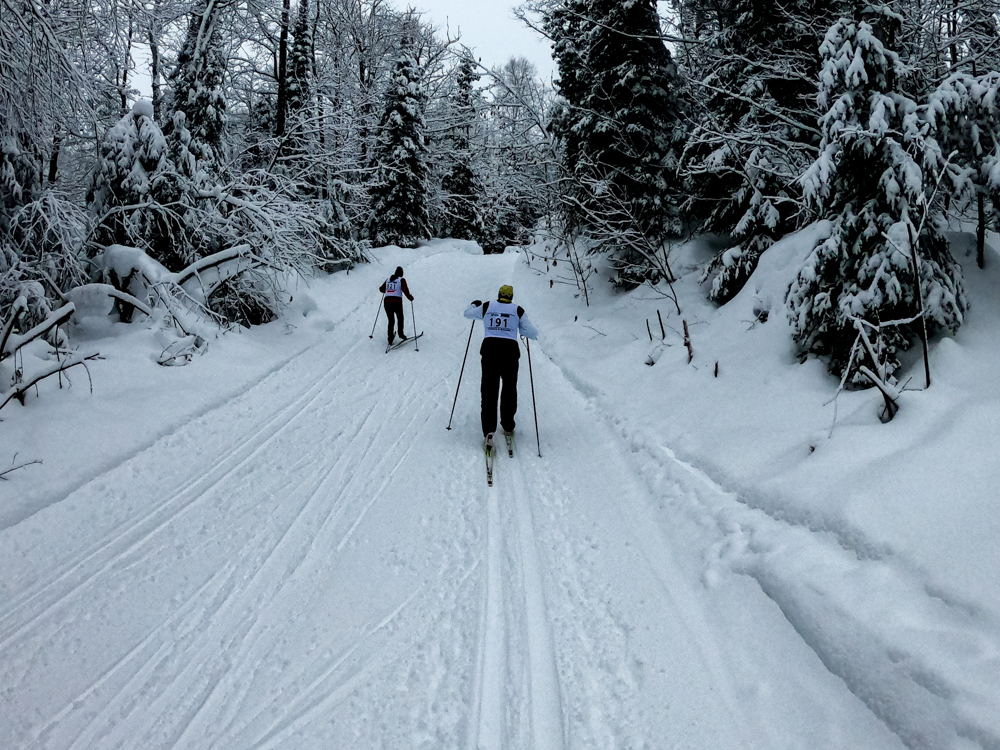 Following bib 191 at the beginning of the race 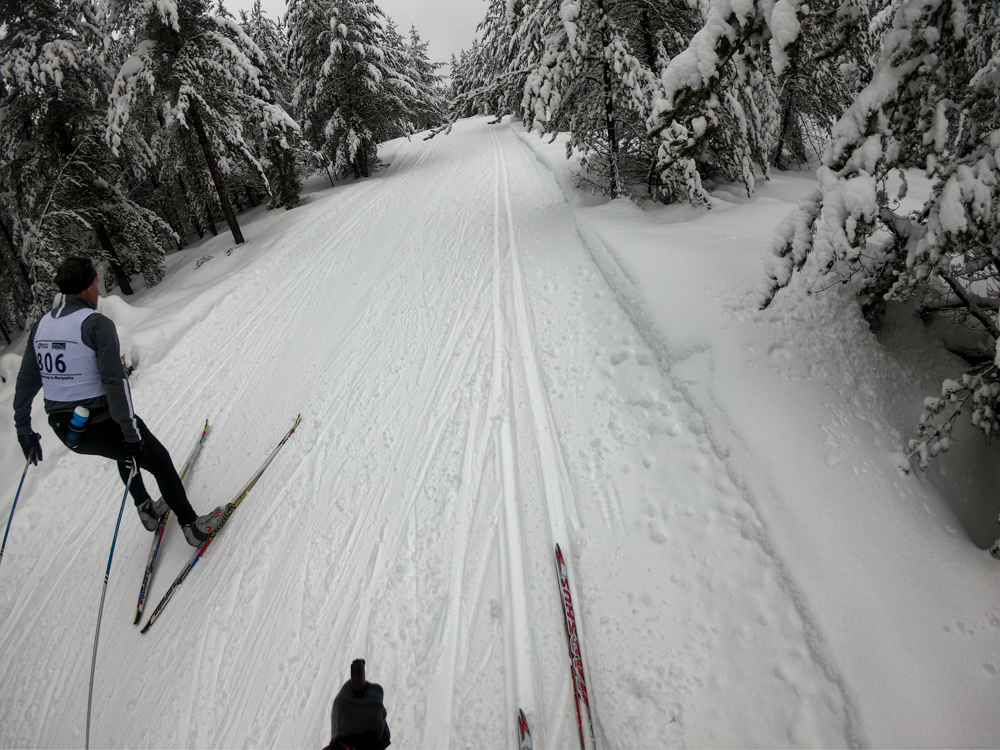 Passed by skate skier during the Noque ski Marathon

While going through a narrow section where the trail went through some rugged terrain, I all of a sudden got passed up by an elite group of skate racers. They seemed to come out of nowhere. I jumped out of the way and let the front skiers pass.

I waited to the side while more passed. Skate skiers, especially fast ones, are so much faster than most classic skiers like myself, that I soon found myself alone in the woods again. At least until the next batch flew by. 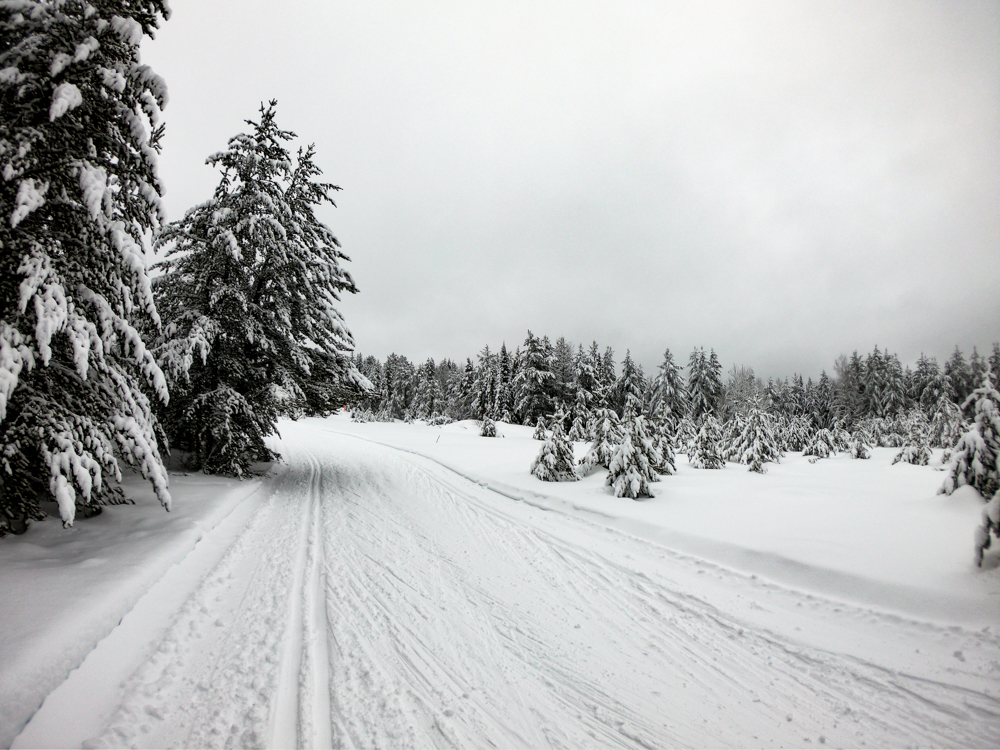 Beautiful but stark scenery on the Noquemanon

Rugged up and down terrain halfway through

After crossing a lake somewhere about halfway through, the course goes straight up to the highest point of the course. The nature of the snow changed at this point too. Perhaps this was due to the elevation change, so many skiers passing by, or an air temperature difference.

Whatever the reason, the snow changed from slow and sticky to fast and slippery. I think I prefer the slippery snow as you can wax your skis to offset the slipperiness. 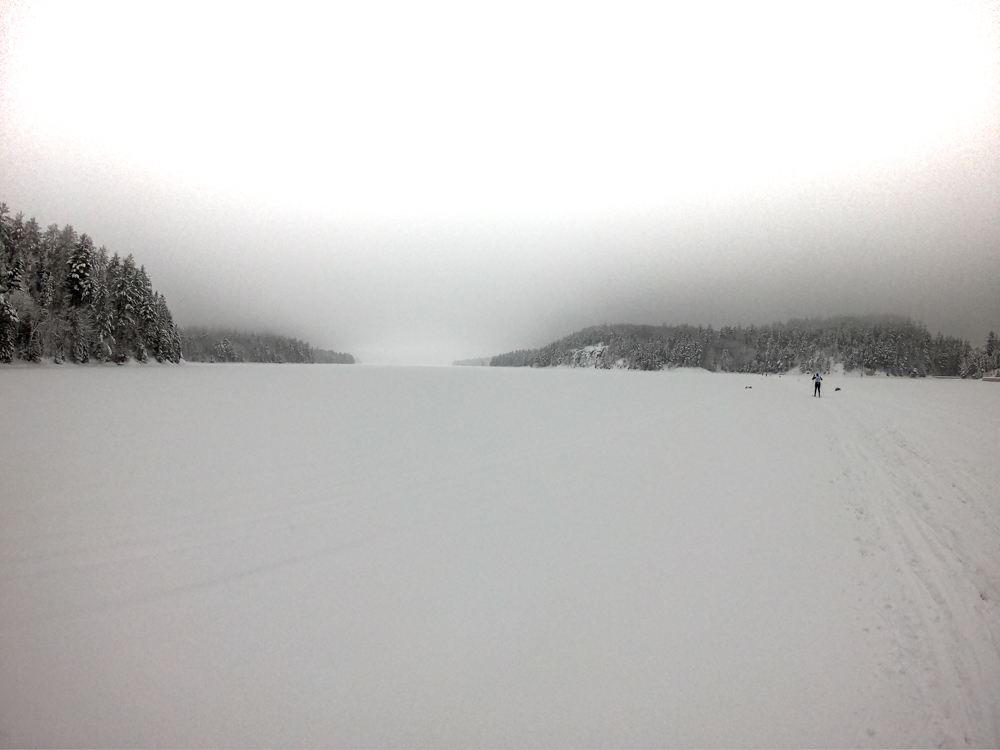 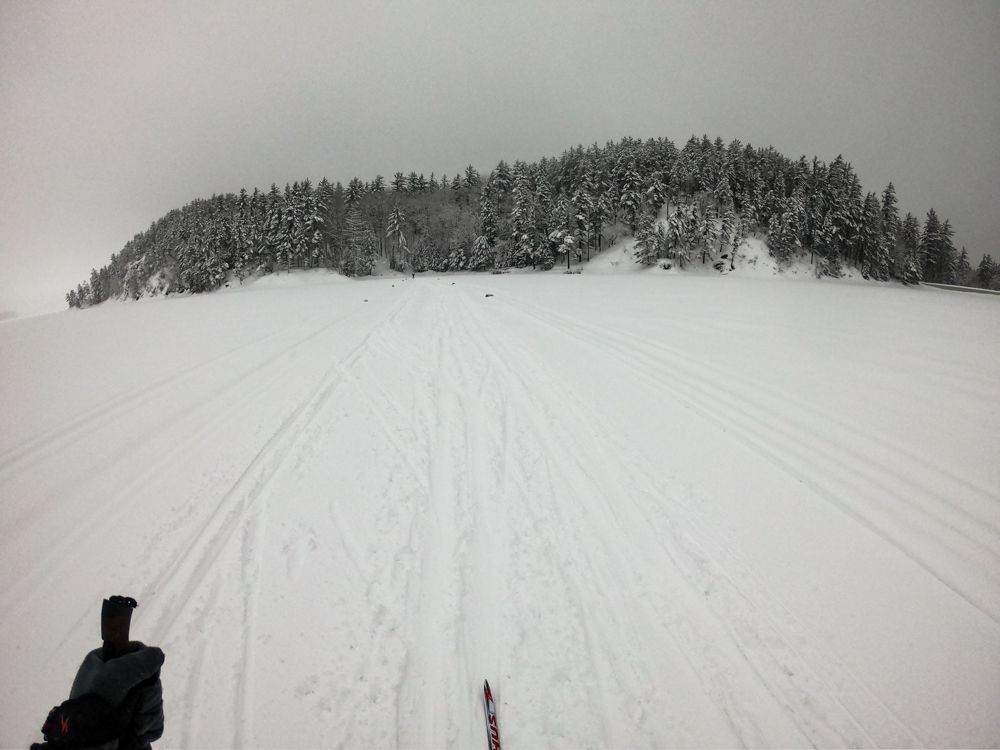 Conditions and terrain changed after this lake crossing

This shift took place during the most challenging section of the course. A few more crashes ensued. The downhill sections were now slick and more difficult to snow plow; whereas, they were slower and ponderous previously. I suffered two pretty hardcore crashes. 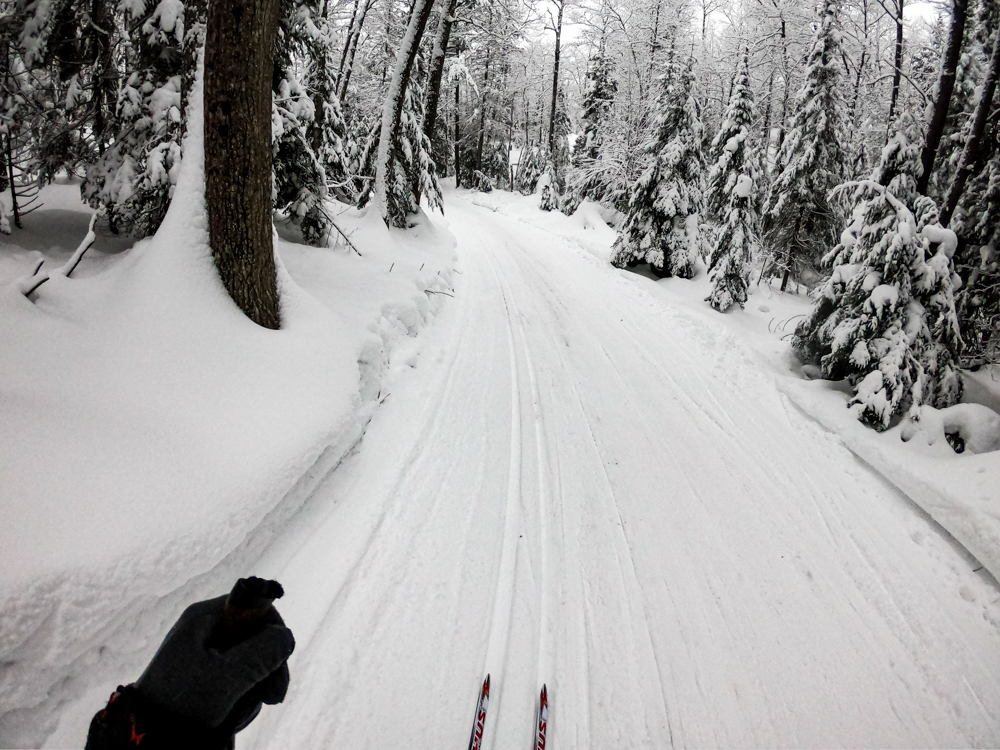 On one short downhill slope ending at another lake crossing, I endured my worst spill. The downhill was short but steep. Since so many skiers had already gone down, the path down was kind of irregular due to previous crashes and snowplowing.

I fell forward and landed on my head. I had a GoPro head strap on top of my head. That cushioned my fall, and I subsequently flipped over onto my back and bounced down the hill. Fortunately, except for a bruise or two, I was fine. 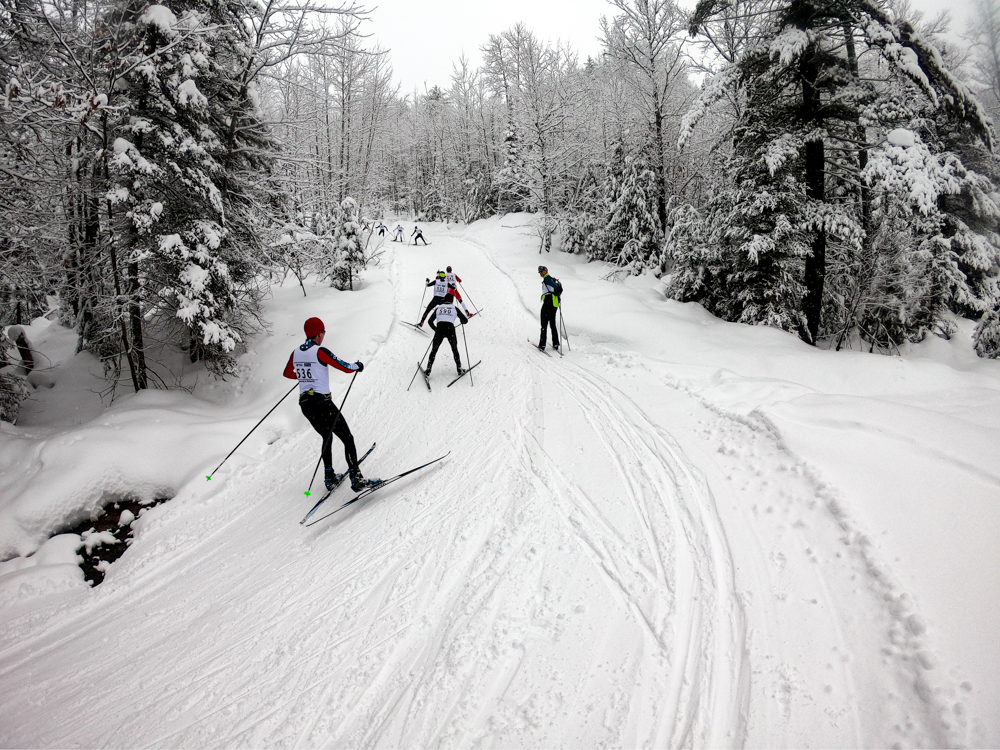 A little worried about finishing the Noquemanon Ski Marathon

In the past, I have gone entire seasons of skiing without crashing. Already today, I totaled at least four. I was a little concerned about my well being, and if I could finish. At some point, they cut you off and will not let you finish.

If you are not finished by 4:30 p.m., the course will pick you up. A little voice in my head was thinking with all these crashes and slow going, getting picked up would not be that bad after all. 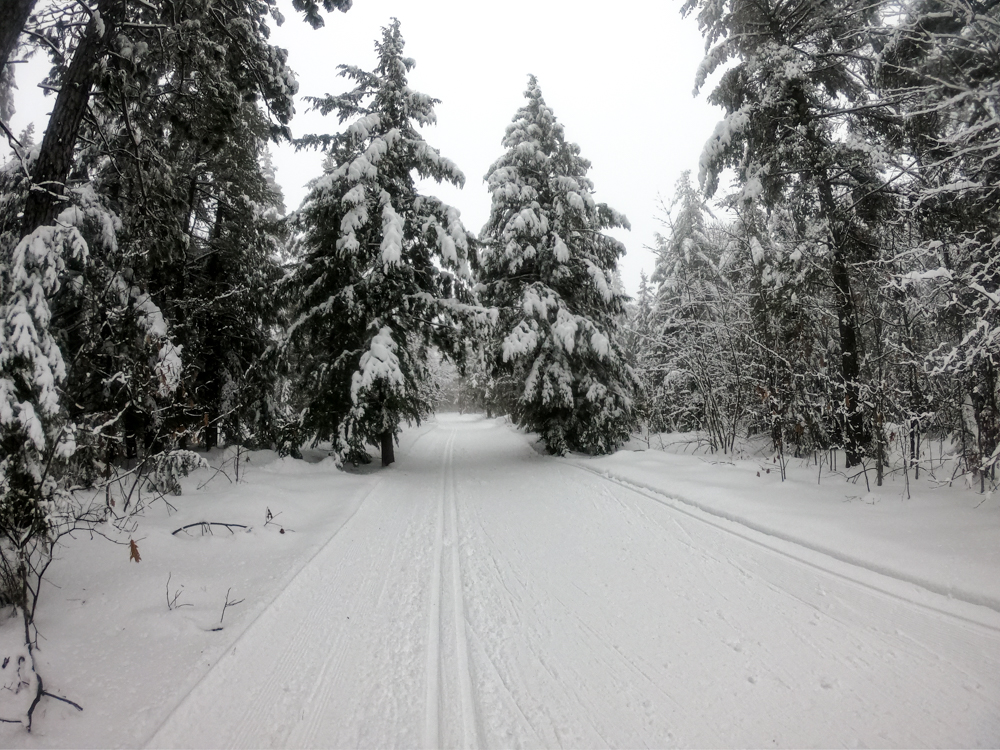 I quickly banished that thought because I wanted to earn my 51K beer. After the violent crash on the short hill, I rallied and stayed upright the entire second half of the race and finished just over seven hours.

The last aid station provided delicious donut holes and a fiery shot of fireball, which carried me through the last few kilometers into town. I placed 160th out of 167 in the Classic 50K, but I was happy to finish and mark the Noquemanon Ski Marathon as another completed race. 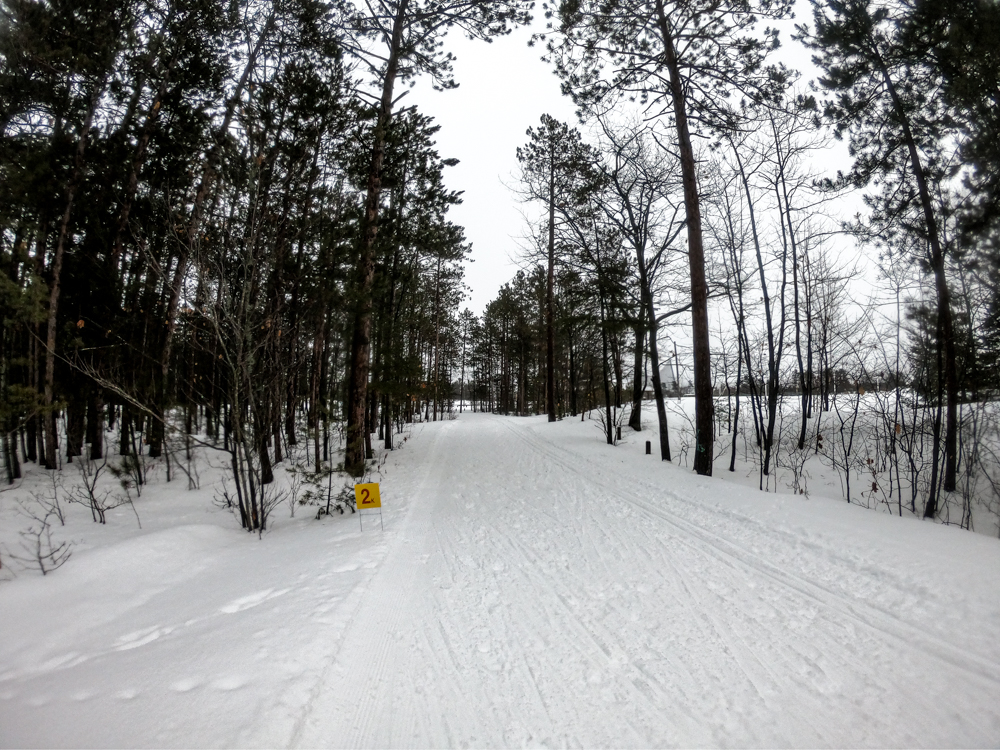 Two kilometers to go until the end at the Superior Dome in Marquette, Michigan

I hobbled back to the Superior Dome for soup and my 51K IPA reward. I would say the Noquemanon has the best scenery of all the ski Marathons I have participated in. Thank you Ski the Noque and Travel Marquette for having me.

My entry in the Noquemanon Ski Marathon was complimentary thanks to Travel Marquette and the race itself. This post is a narrative of my experience and the fact I received complimentary entry did not impact this post. All thoughts, photos, bruises, and exhaustion are my own.