Anyone who’s ever visited Niagara Falls, or even thought about visiting, has probably wondered the same thing. “What happens if you go over the falls?” The idea of hopping in a barrel or some other vessel and sailing over Niagara Falls on purpose probably isn’t appealing to most visitors, who simply want to view the natural wonder from the safety of dry land. However, the idea of going over Niagara Falls has attracted dozens of daredevils for more than 100 years. 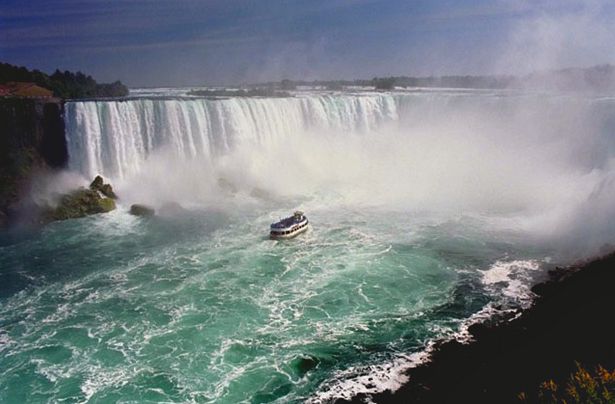 So, the question remains: What really happens if you take a trip over Niagara Falls?

What Happens When Going Over Niagara Falls

Niagara Falls has been a popular destination for tourists for nearly two centuries. The falls draw visitors from all over the world with natural beauty, a wide array of things to do and see, and, in the case of honeymooners, rumors of the mists having aphrodisiac powers. And while most visitors are content to take in the falls from afar, since the beginning of the 19thcentury, thousands of people have attempted to go over Niagara Falls, either as part of a stunt or to commit suicide.

A lesser number have gone over by accident. Experts say that today, accidentally being swept over the falls is all but impossible, so it’s not something you really need to worry about during your vacation– but the fact remains that of all of the people who have gone over the falls, only three are known to have survived without safety gear. Even with a protective vessel, the odds aren’t good for survival.

The first person on record to go over Niagara Falls in a barrel was Annie Taylor, in 1901. Though bruised and battered, she lived to tell the tale. Ten years later, Bobby Leach opted for a steel barrel, and survived with minor injuries. The next two successful attempts were in ball-like contraptions. In 1984 there was another successful attempt in a barrel by Canadian Karel Soucek. During the 1980’s, several successful attempts were made. One daredevil even did it twice. It wasn’t until 2003 that Canadian Kirk Jones went over without any equipment whatsoever, and actually survived.

While stunters have tried any number of methods to survive a trip over Niagara Falls, from inner tubes and steel barrels to anvils (that didn’t work out at all), most experts say that the odds of survival depend on nothing more than pure luck.

Why Only the Lucky Survive Going Over Niagara Falls

Several factors come into play when determining the chance of survival when you go over Niagara Falls. The speed of the water, the angle you enter the water, the water temperature, and the bubbles present in the water, and how well you can get away from the falls quickly. This all assumes, of course, that you miss the rocks at the bottom of the falls.

At the top the falls, the rapids move at a rate of about 25 mph. By the time you hit the edge of the waterfall, the water is moving at 68 mph. The actual fall takes only a few seconds, but experts say that if you make it to open water (again, assuming you don’t land on the rocks) you still have challenges. The water temperature in the Niagara River averages in the 30s, giving you about three minutes before you black out – assuming that the shock of the cold water didn’t trigger a heart attack. At maximum, you have about 15 to 30 minutes to survive in water that cold if you don’t black out.

The other problem is that the water at the base of the Falls is filled with bubbles. So many bubbles, that they will block out the sunlight and make it almost impossible to determine where the surface is. Considering you’re likely to be disoriented from the fall, the darkness isn’t going to help. If you are able to find the surface and swim to the banks of the river, rescue is likely, especially if your fall was within view of tourists and the hotels in Niagara Falls. 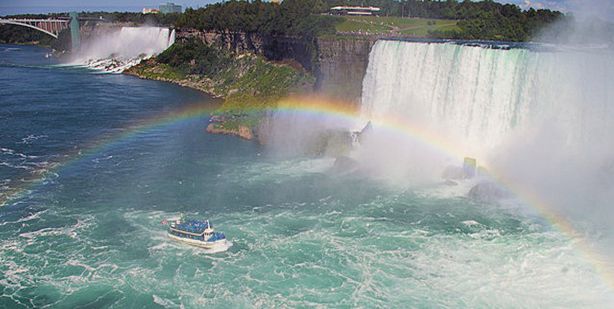 When going over Niagara Falls, the tour boats have taken part in several rescues.

In fact, the Maid of the Mist (a must-do when you visit Niagara Falls) has been involved in several of the rescues of people going over the waterfall). Don’t expect to come out unscathed though. Unless you went over feet first and had the presence of mind to tighten your muscles before you hit the bottom (and you’re in decent shape to start with.) It’s likely you’ll have a few broken bones, at minimum.

Broken bones will be the least of your problems, too. Going over Niagara Falls is illegal, and will likely mean some big fines and other punishments. Kirk Jones, who went over in 2003, had to pay thousands of dollars in fines and was banned from Canada for life. Being banned from a country is never a good thing for someone who likes to travel. If the idea of almost certain death won’t deter you, this should.

So, while it’s perfectly natural to ask “what if?” when visiting Niagara Falls, it’s never a good idea. You’re better off to enjoy the Falls from one of the many attractions designed to let you do it safely, and leave the stunts to the professionals.