Fall flannel on the Namekagon River 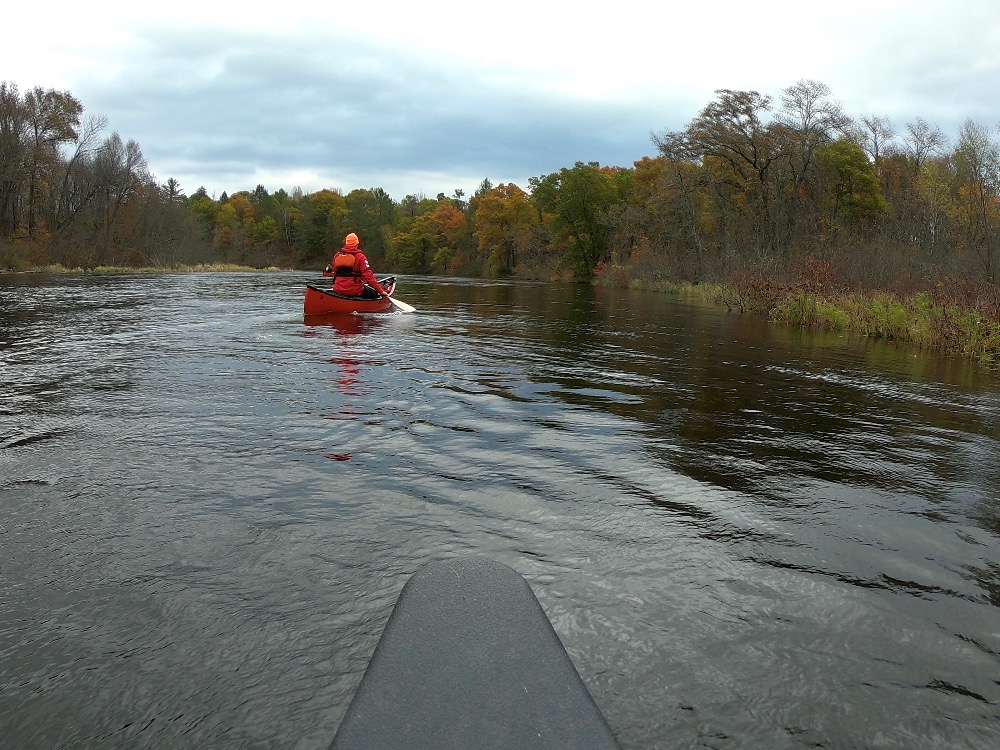 I paddled this river with the Prairie State Canoeists as a child, but it had been several decades since that trip. Since then, I have only seen the river in winter during American Birkebeiner competitions and crossing over the river on the way to adventures further north. This trip we stayed in a scout cabin, so there was no camping in cold weather.

Namekagon is beautiful in the winter, but a little too cold to paddle – This photo taken just west of Hayward

We were hoping to catch the fall colors at peak level. Unfortunately, most of the leaves on the stretch we paddled had blown off. The water level was also unusually high. We hoped to do some poling, but the river was a little too deep and fast flowing for standing up. Scott and I both brought our poles, but we stuck to the paddle on this trip. Scott dabbled in poling for a bit, but changed back. 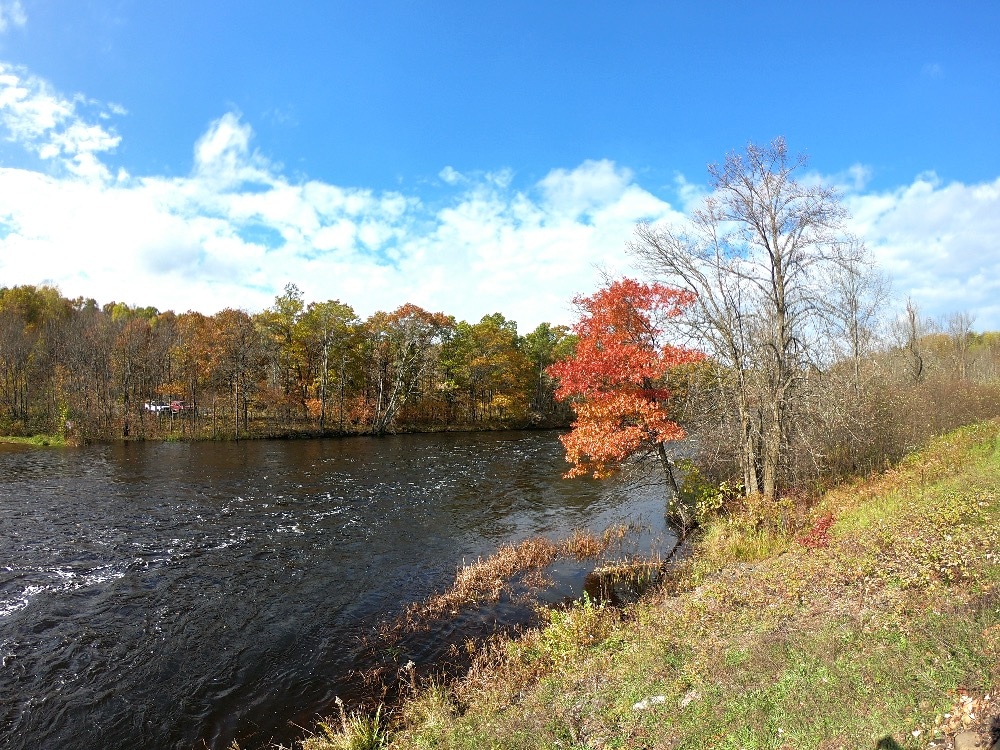 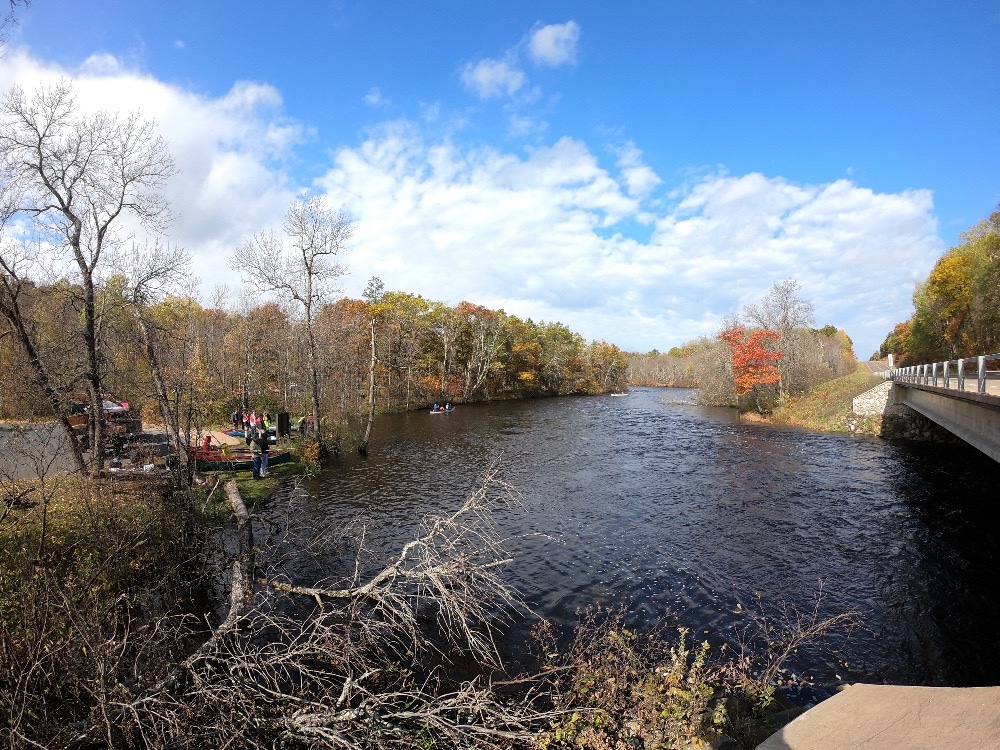 Picture of the group before us taking off from the put-in. We would catch up pretty quickly

The Namekagon River is over 100 miles long, so choosing a section is no easy feat. We paddled a ten mile stretch from County K to Whispering Pine landing. It was a pretty cold day, so we decided to keep it short and sweet despite the fast current. Two hours on the river was fine for us on this day. Fortunately, we were all garbed in the tell tale red and black flannel mandatory on all BMP trips when temperatures fall below 50 degrees. 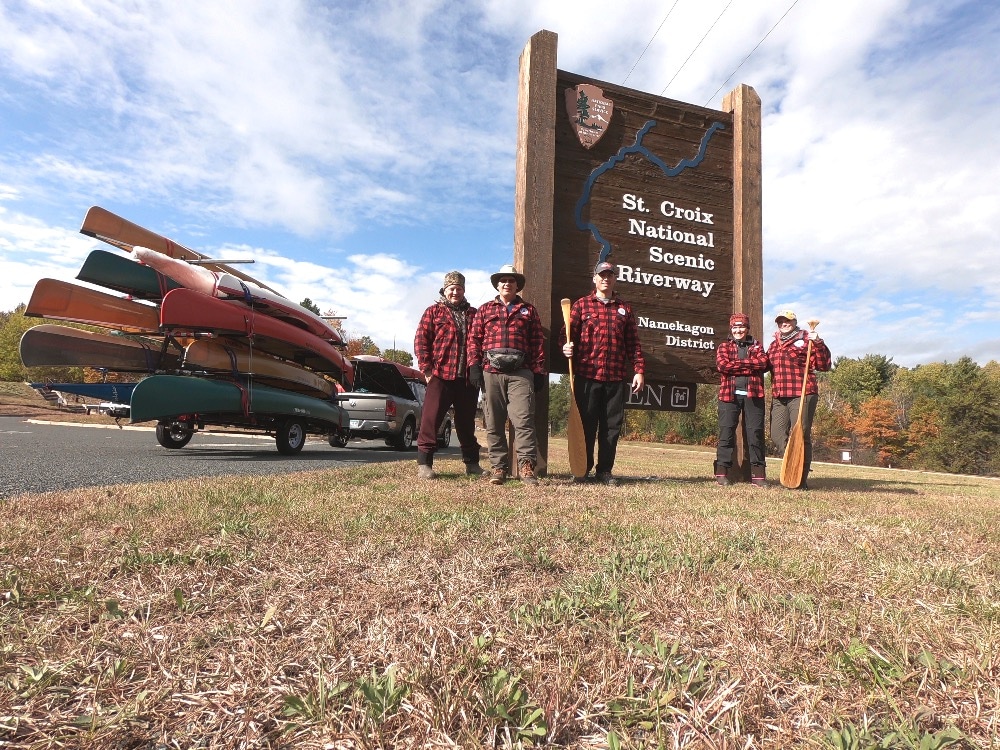 Bull Moose Patrol group shot in the mandatory red and black flannel as we pose in front of the National Scenic Rivers sign at Trego. Thanks to Kurt for bringing the trailer full of Wenonah Canoes

There was another group taking off with us at the same time. They got started a little bit before us, but they were not very experienced and had trouble navigating the first bend. At least one canoe dumped, so we passed them within the first quarter mile as they had stopped and started a fire to warm up. New paddlers should not really be out paddling when the weather is cold and the water is high. 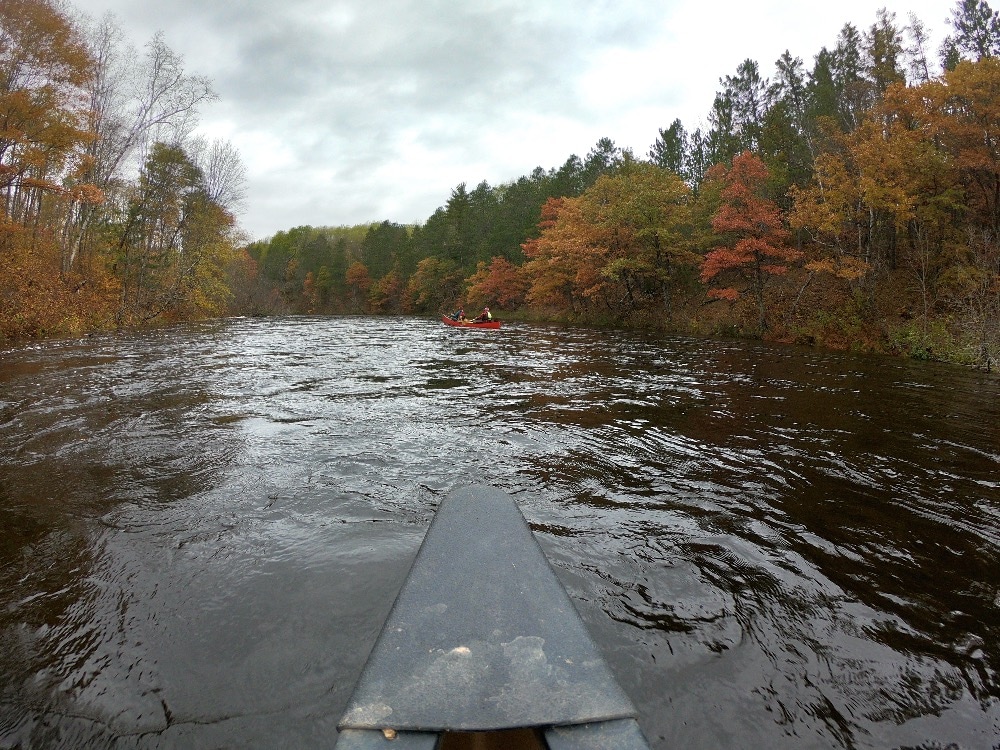 Mixture of faint color and pine on the Namekagon River

After we passed them, we did not see another canoe the rest of the day. There was some beautiful fall color on the drive up to the river and the color looked nice at the put-in, but the stretch we paddled only had a few sporadic trees with nice color. When there was color, it seemed kind of burnt instead of bright orange and red. We decided the next day to paddle the Birchwood Canoe Routes. This turned out to be a good decision as the color was a little better further south. While we did not see a lot of red on the leaves of the trees, there were a few red canoes and explosive red flannel to compensate. Next year, paddlers may come out to peep the red and black worn by BMP instead of the colors on the trees. 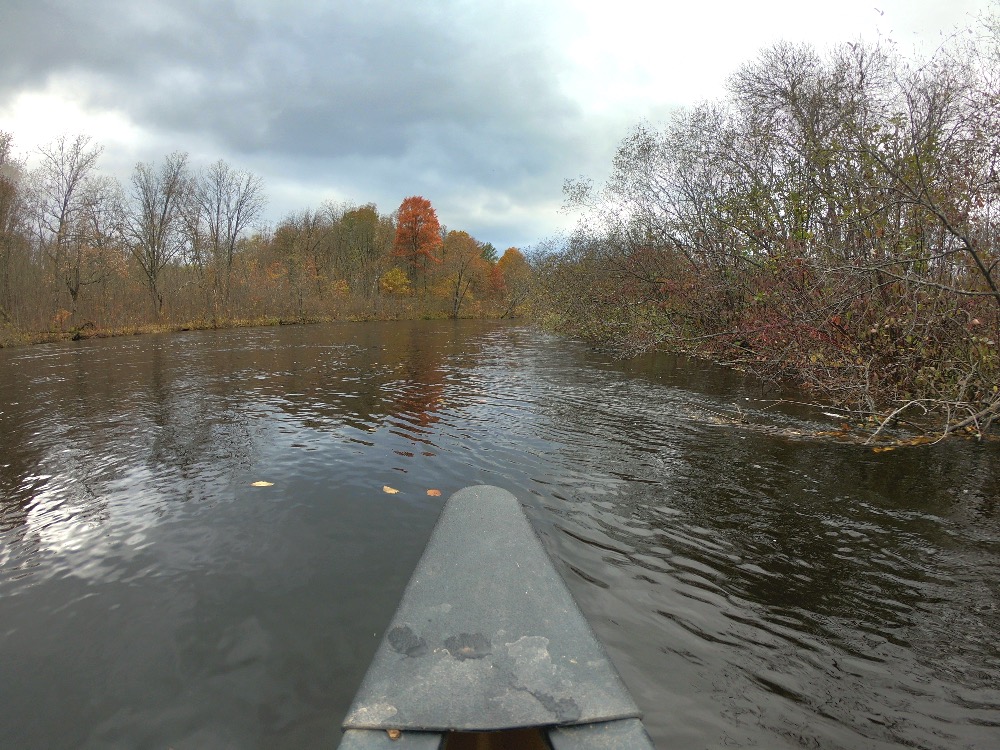 We went on the second weekend of October, so if you are wanting to see some brilliant fall color in the northwoods, perhaps the weekend before is better. I went on the Flambeau River several years ago on the 9th of October and it was perfect. 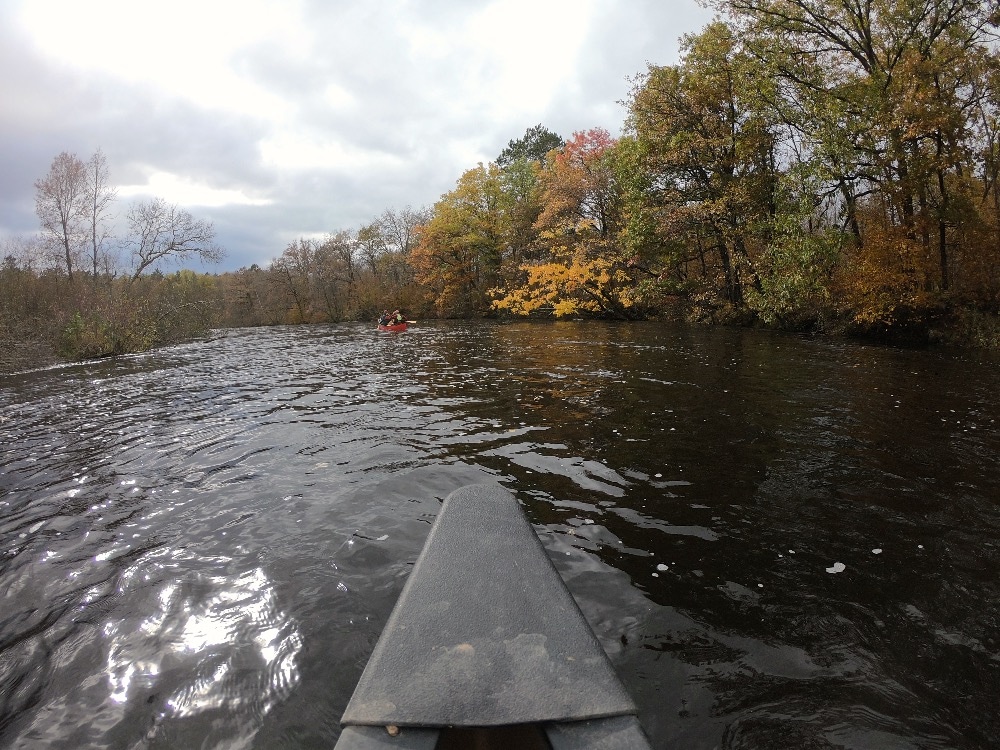 Faint presence of some orange along the Namekagon River

The scenery was typical northwoods Wisconsin. A lot of pine trees mixed with hardwoods with gentle rolling hills. I paddled with Emily (AKA EK) who kept the canoe straight and rolling while I manipulated the GoPro. Kurt from Wenonah Canoes brought a trailer full of new canoes, so we were well equipped for the trip. 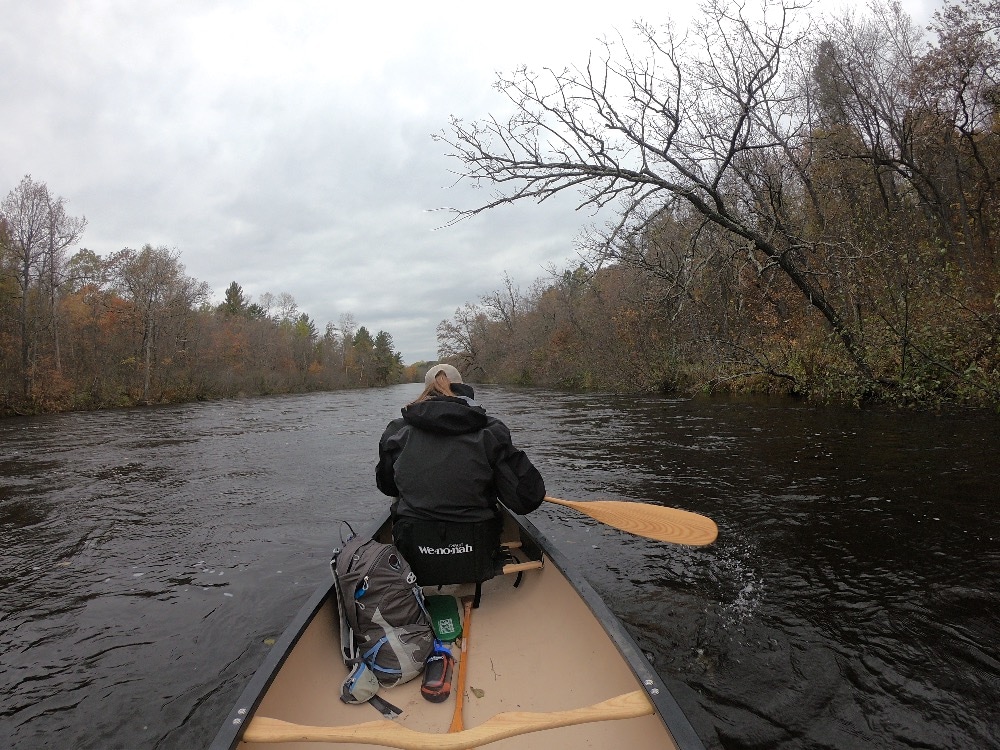 No need to paddle hard with a strong current and EK in the bow. 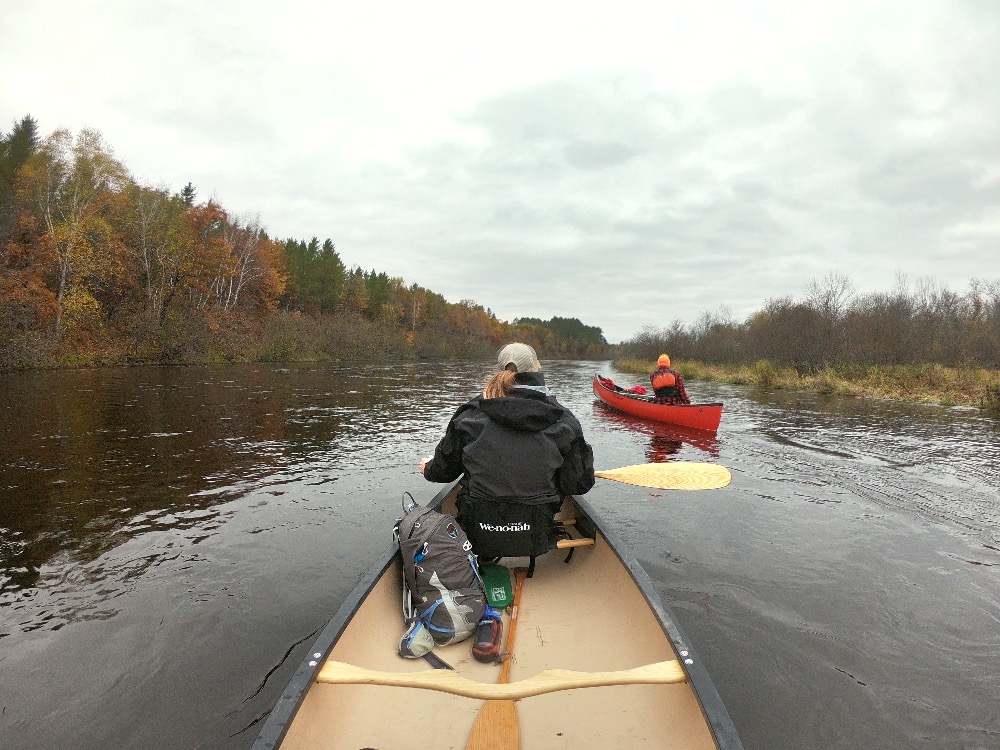 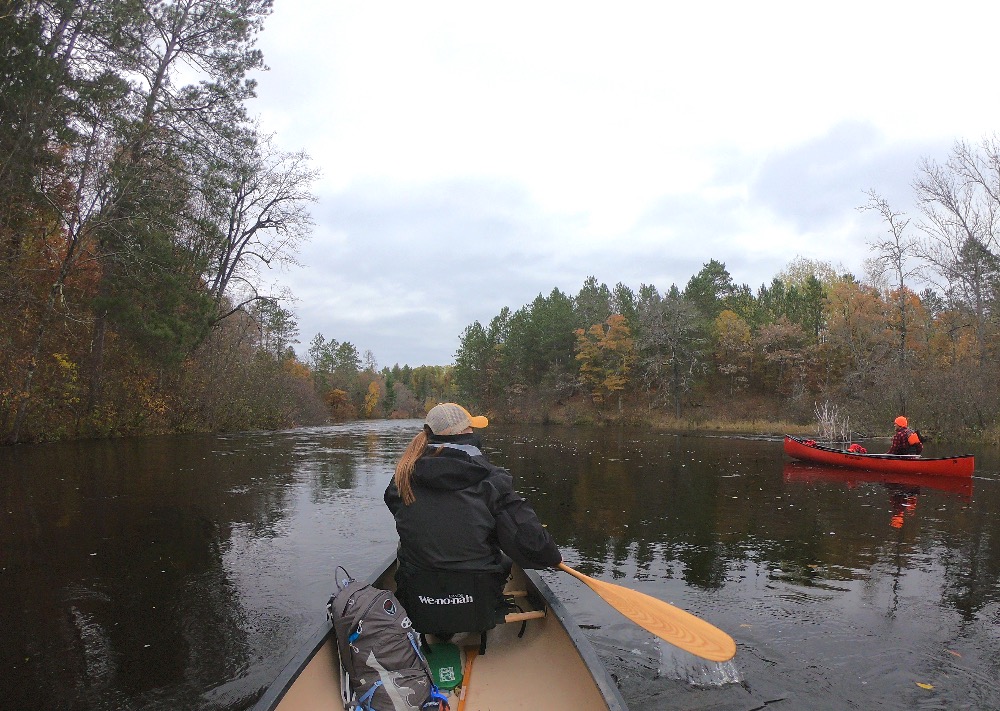 Another picture in the series of EK paddles, and I take GoPro pictures on the Namekagon River

Once the paddle was over, it was time to visit various northwoods bars. The Spooner area is not lacking in colorful saloons and eating establishments. We warmed up with local brew, pizza, and wings, and discussed the baseball playoffs and strategized about the possibilities for paddling the next day. 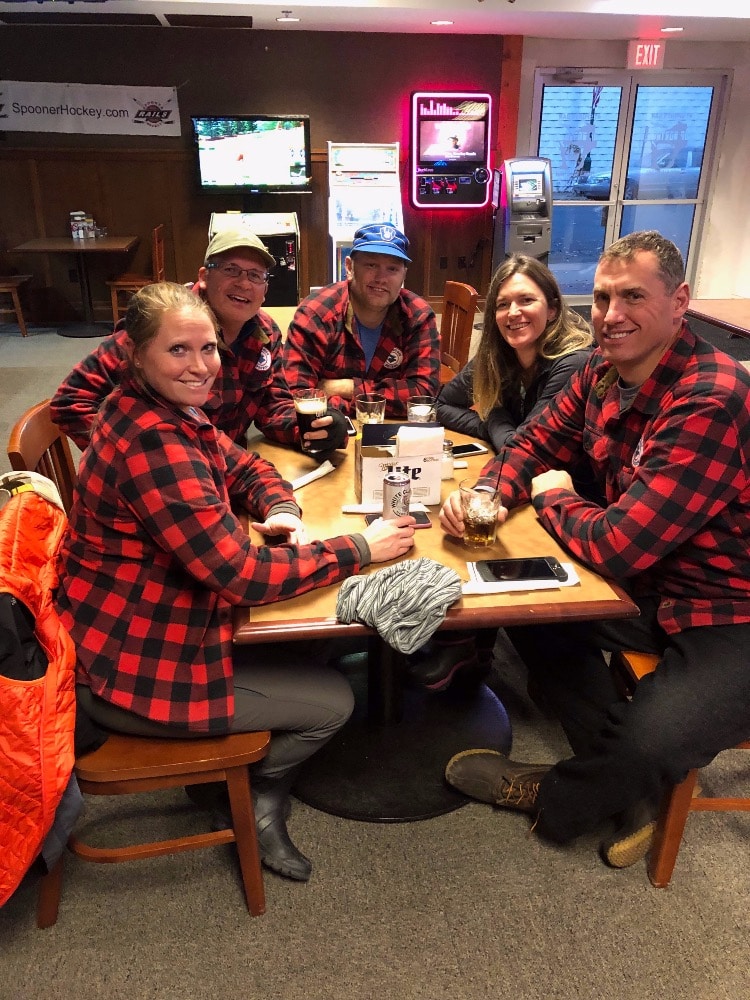 BMP refueling and warming up at a Wisconsin watering hole

While the conditions were not optimal for great canoeing due to high water, cold temperatures, and not perfect foliage conditions, it was great to get out on the river one more time. Also great to see your canoeing buddies again before everyone hunkers down for winter until Canoecopia in March.