In my time hiking, I have had some memorable tough hikes. Usually the toughest have occurred with a full backpack on. Hikes up to the Appalachian Trail in the Great Smoky Mountains are always tough. Crossing the Chihuahuan Desert or up the mountains in Big Bend were exceedingly difficult. Other memorable tough climbs included the summit up to the ridge at Baxter State Park in Maine and the hike from the Colorado River to the top of the Grand Canyon. The toughest day hike I have ever partaken in was up the Concepción Volcano on my recent trip to Nicaragua. 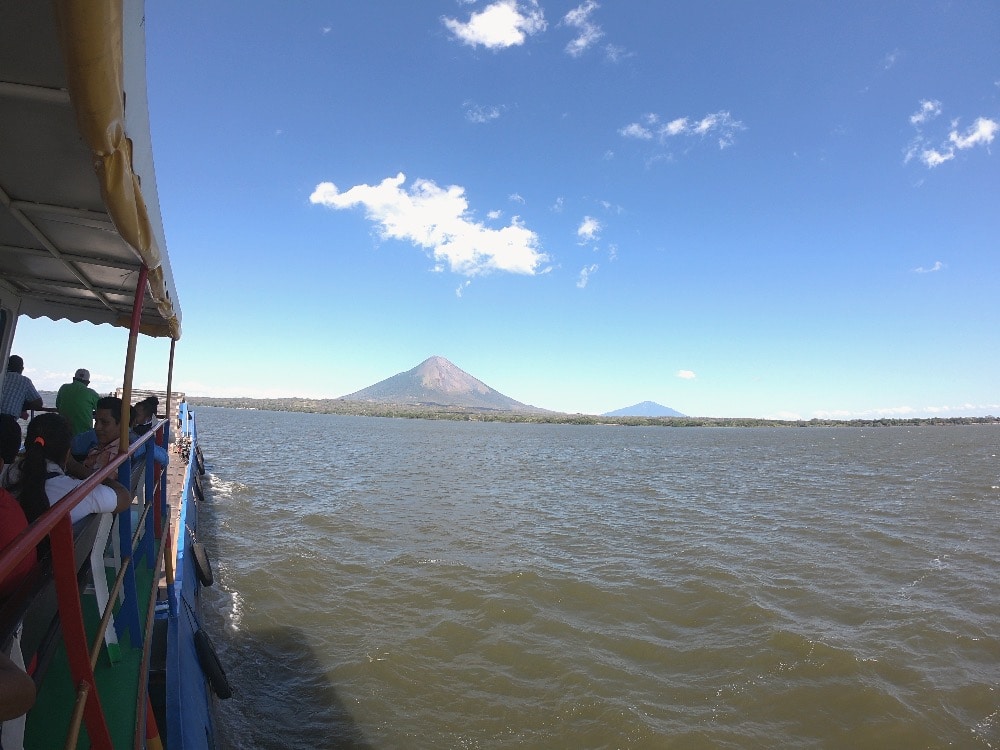 Under no illusions about the difficulty of the hike

I knew this hike would be difficult. Lonely Planet labels it so, and I talked to a dude in Managua who hiked to the top and mentioned that it was so windy up on top that they were pelted with flying volcanic rock. I could also see how steep the volcano was from the ferry over from Rivas. The incline of the volcano from a distance is measurable.

Booked the tour through the local bed & breakfast

I booked the tour through the Cornerhouse Bed & Breakfast in Moyogalpa. Moyogalpa is a small village where the ferry comes in from Rivas on Ometepe Island. Cornerhouse is located only a few blocks up from the ferry port. I arrived, ordered lunch, booked my room, and then inquired about the hike up the Concepción Volcano. In a matter of minutes, a gentleman arrived with information on getting a guide. It was $25.00. $22.00 for the guide and $3.00 for entrance into the park. 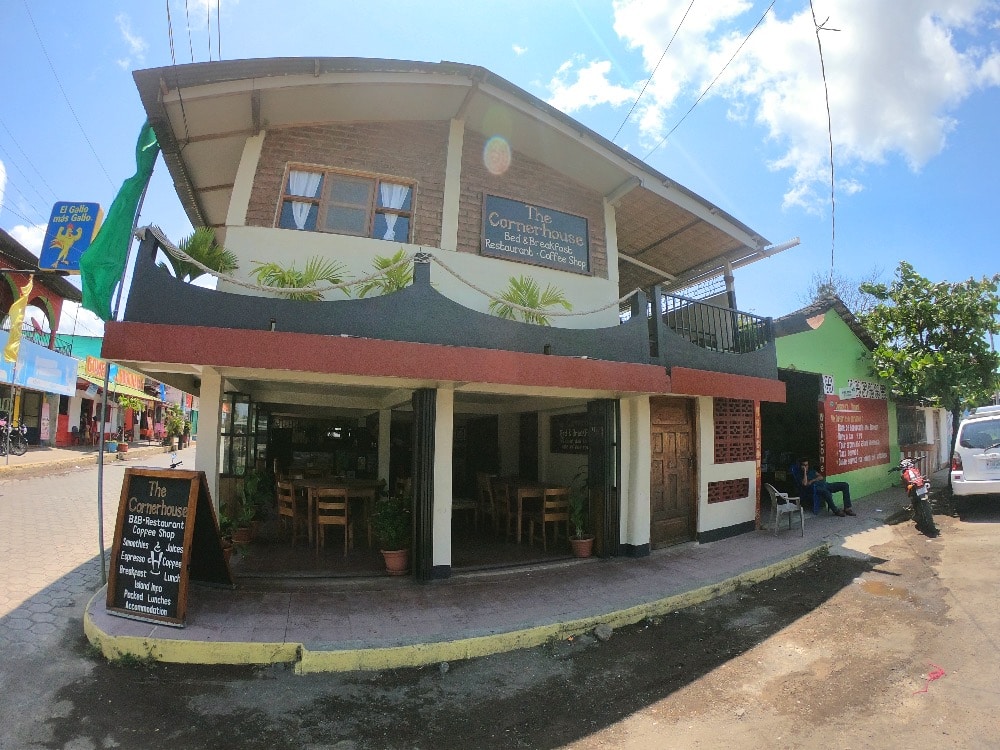 Cornerhouse Bed & Breakfast will pack you a lunch for the trek, but this needs to be procured in advance. The restaurant closes at 5 p.m. and does not reopen until 7 a.m. the next day. I did not arrange this in time, so I just stopped at the grocery store and bought some water and snacks. They recommended 3 liters of water, which seems like a lot, but the hike is all day in the hot sun. I needed just about every drop of water of that 3 liters including some powerade bought at the entrance.

All photos and videos taken with GoPro Hero6 black

Leave early the next morning

My guide Roger picked me up in a tuk-tuk the next morning around 6:30 a.m. We stopped for water and then left for the entrance to the park. We walked to a small building where we signed in and paid the entrance fee. 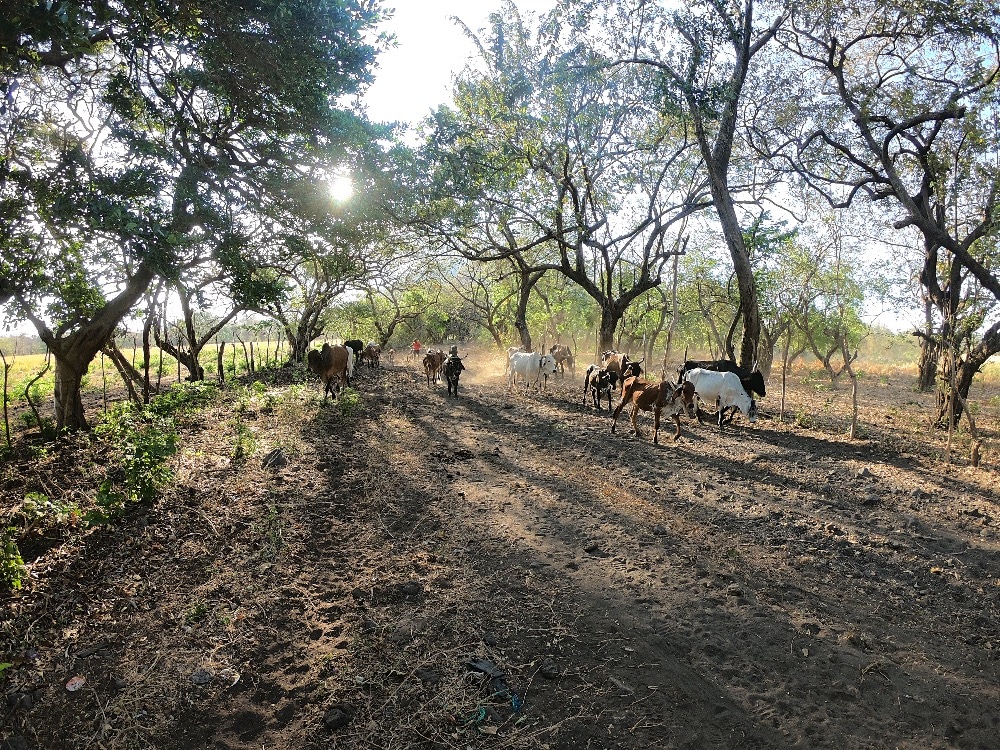 The hike started off easy enough through gentle rural farmland

The first couple of miles crosses rural farmland. We came across fields of livestock and horses that were fenced off from the gently undulating terrain. We came across a small shack, which contained a little beverage stand. A local family manned the building and sold powerade, soda, and beer to Concepción hikers. I purchased a powerade. 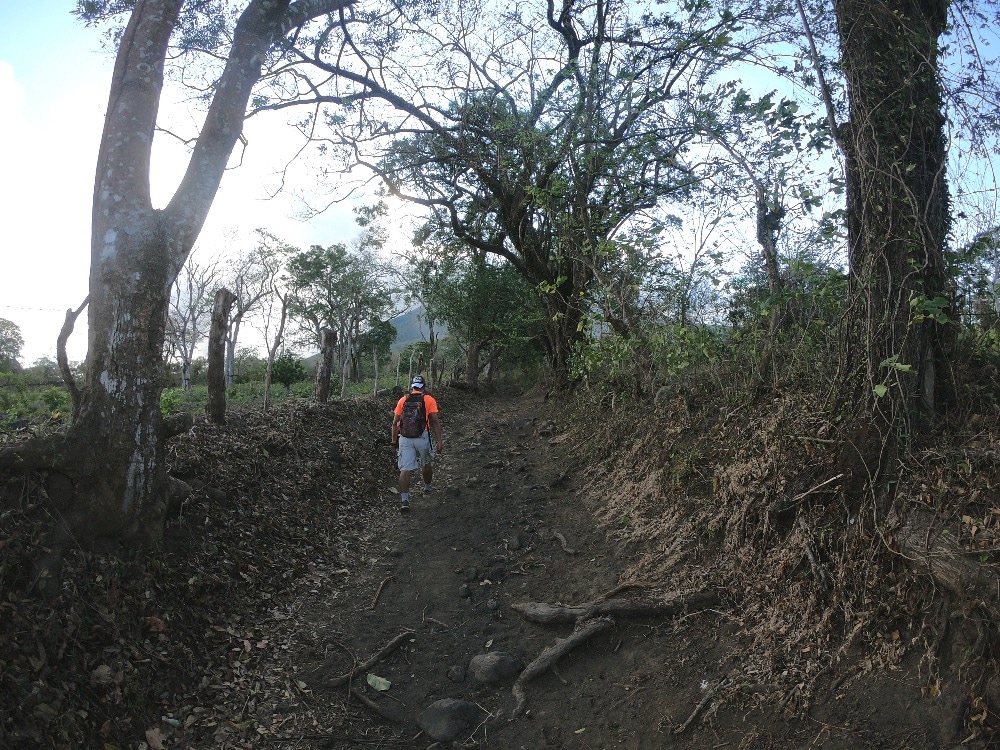 Hiking through the lowlands with Concepción Volcano rising in the distance

As we approached the base of the volcano, the vegetation and trees became thicker. The wildlife also increased here. We saw many magpies and a few howler monkeys. When we were not seeing the monkeys, we could hear their primordial howls from nearby trees. 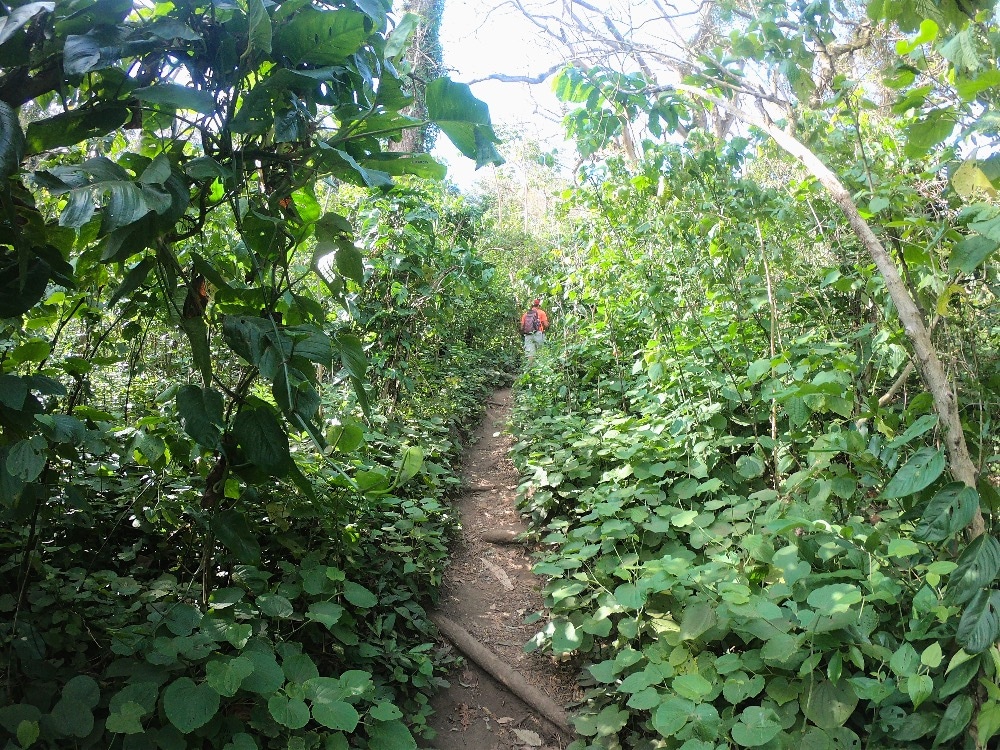 As we headed up the base of Concepción Volcano, the vegetation became thicker

Base of Concepción Volcano

The difference from the gentle terrain of non-volcanic Ometepe to the steep rising volcano was so pronounced that you could see the actual base of the volcano. It looks like a high ridge at first, but it keeps going up and up. The first section of the incline goes through the thick jungle, so at least there is shade. It is  tough going, but manageable. 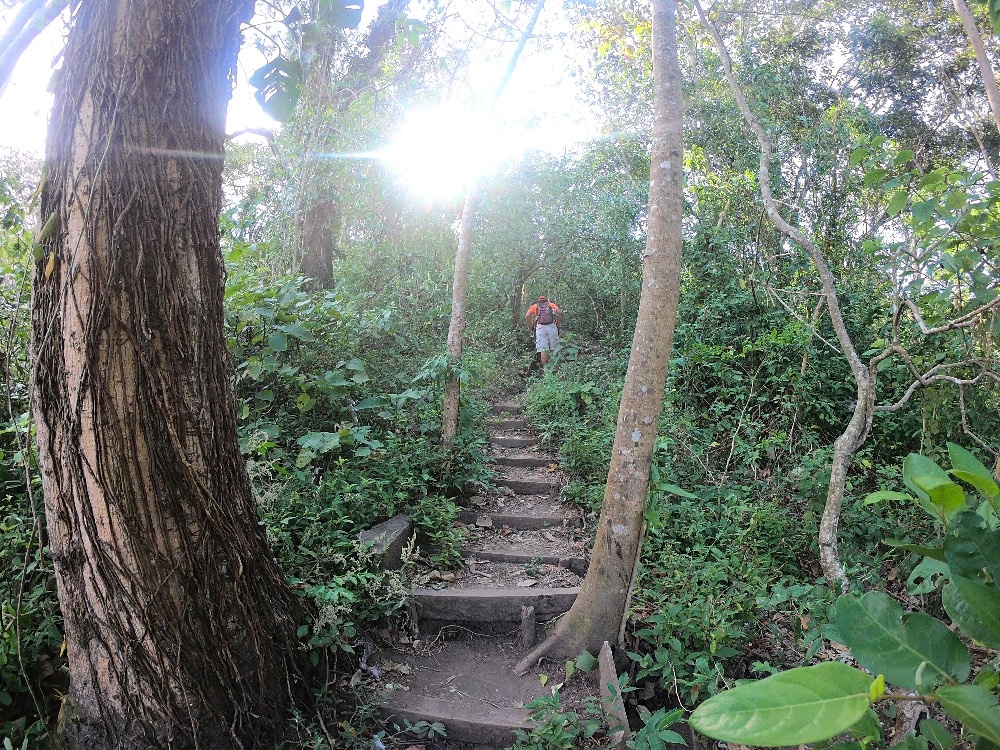 It took us a little over an hour to climb from the base to Lookout Point. Lookout Point is where the treeline ends and the volcano’s steepness changes from tough to insane. We took a nice break here and talked with other hikers. We had seen a mother and daughter from Mexico earlier, and now we were overtaken by a Swiss hiker. He was with a group, but surged ahead. 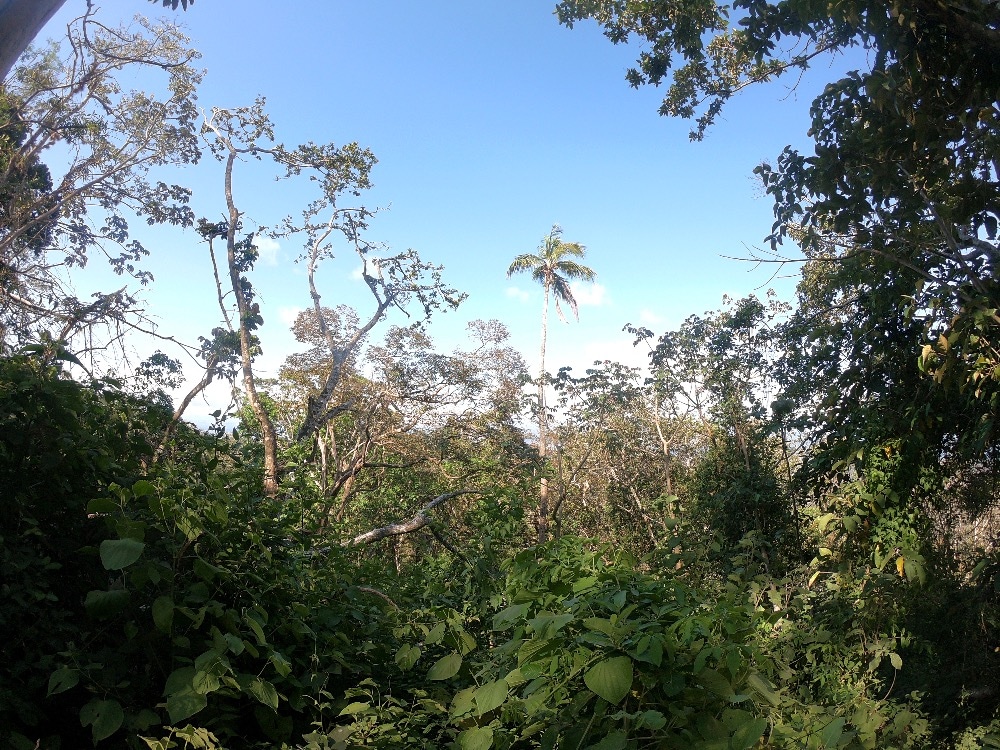 It took a while until the spectacular views showed up. Until then it was nice views of the surrounding forest land

I had my own guide named Roger. Roger was fantastic. He was a local from Moyogalpa. He spoke excellent English and was very personable. I got to know him quite well since it was just me and him on a ten hour hike. At Lookout Point we could see the top of the volcano. It only looked like a half mile away. Roger said it would take two hours. 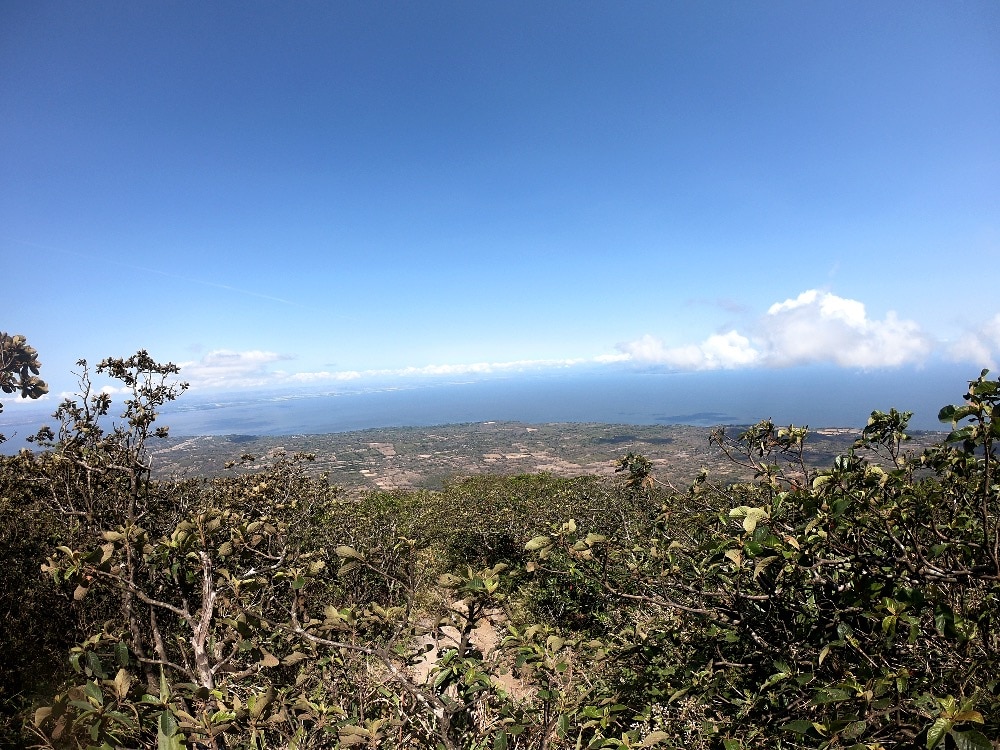 The view from Lookout Point on Concepción Volcano

After Lookout Point everything changed

If you look at Concepción Volcano from afar, you can tell how steep the top is. It almost looks like it would be unclimbable. The slope changed dramatically after Lookout Point. I have never attempted to hike something so steep. If the incline was a few more degrees, hikers would require ropes.

Intensity of the hike went up with the degree of incline

The physical toll from climbing straight up was tough enough, but the hike also took a mental toll. The intensity of the hike rose with the precipitousness of the terrain. You had to focus on the rocks in front of you and only step on rocks that were part of the actual volcano and not loose. If you fell here it would probably not be fatal, but it could lead to broken bones and at the very least scrapes and bruises. 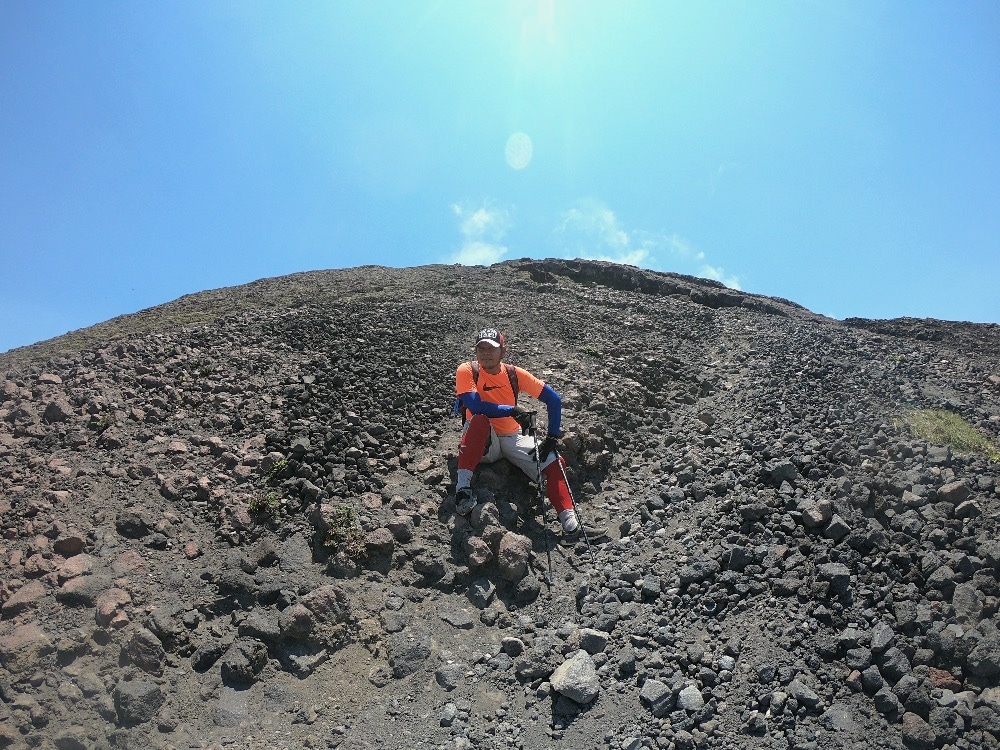 I had to stop every ten minutes or so to catch my breath. I am not sure if the elevation had anything to do with this or if it was just the steep incline. My sluggishness started to annoy Roger. He kind of got on my nerves a little bit with his growing annoyance and my need to stop and slow progress. At one point he warned I might not make it to the top. I realized though he was just trying to help and motivate me to the top. 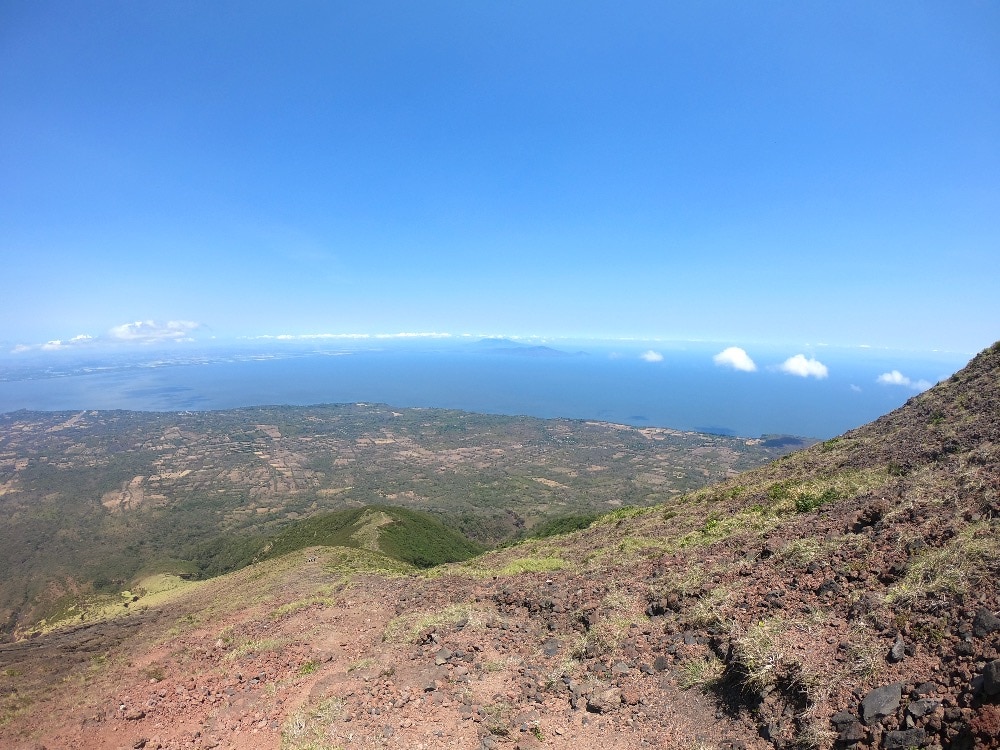 I can see for miles while climbing Concepción Volcano

At certain points up to the summit, I would have been glad to stop and turn around. The view is amazing, but there is no difference from the view at the top from the view at Lookout Point. Once you get above the treeline you can see the rest of the island, several distant volcanoes, and Laguna De Apoyo. I was ready to turn around at any point the last half hour, but I kept moving forward. It would be a shame to come all this way and then not summit. 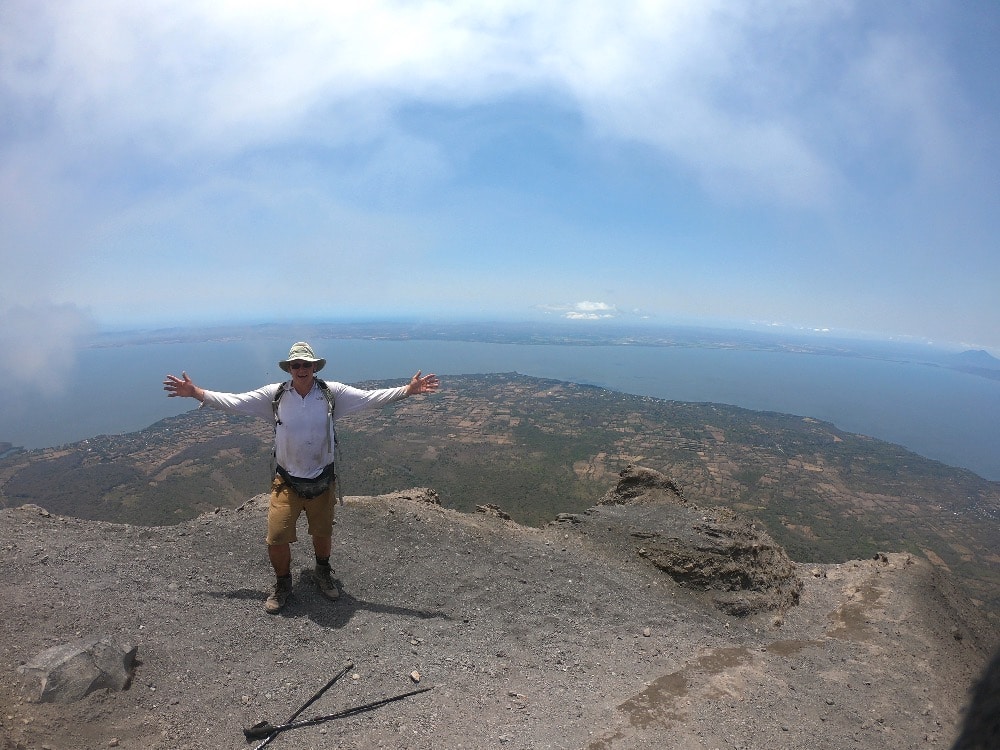 Finally, the very top was in view, and I staggered forward and stumbled the last few feet to the top of the crater. I was greeted with a cloud of hornets and smoke from the smoldering cauldron. I meekly celebrated the top, took a few pictures, and drank the rest of my powerade and more water. 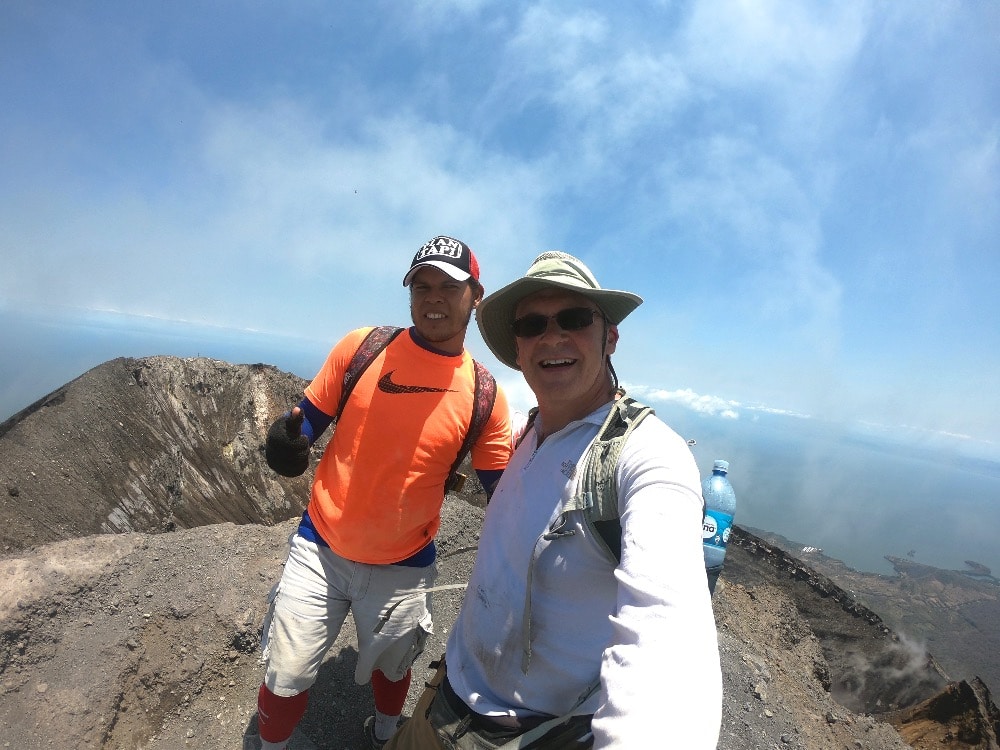 Roger and I celebrate the climb up Concepción Volcano

I began to worry on the way up that I would have little energy for the way back down. At first, I was fine going down as I got a second wind going down, but it took just as long to get down as it did coming up. 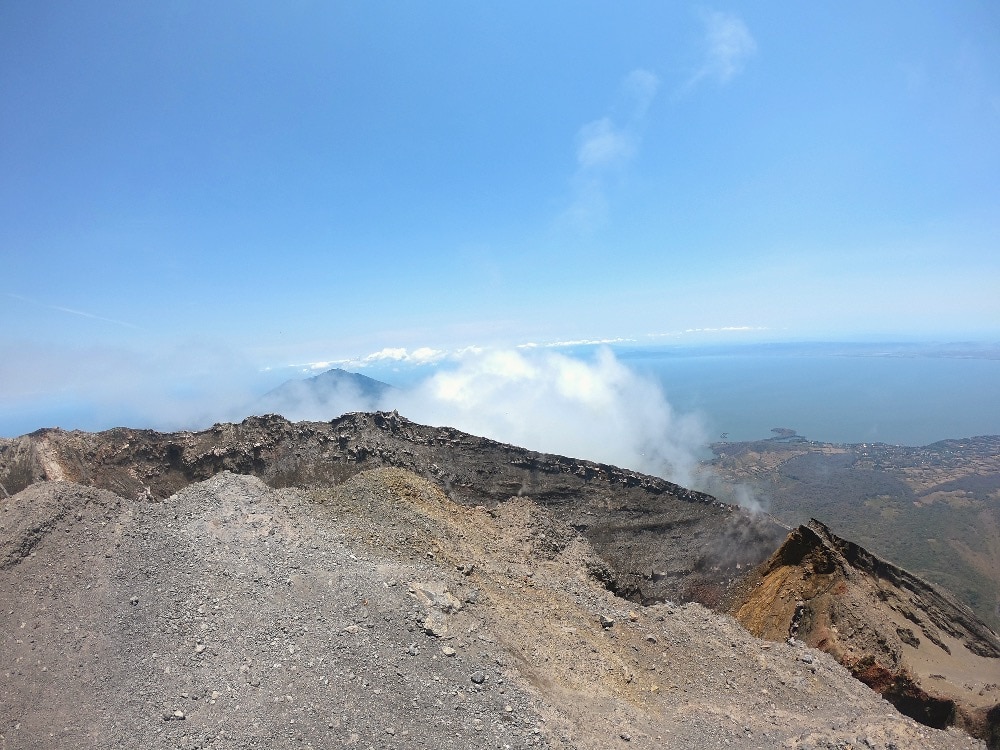 Five hours up and five hours down

We got stuck behind a slow moving group on the way down, and there is not much opportunity to pass. An hour later we finally were able to pass. This was not a big deal as I was content to go their pace. You need to control your speed going down and carefully pick out stable rocks. This was even more important going down. At one point I slipped on some rocks and fell backwards. I caught myself, but in the process cut my hand on sharp volcanic rock and also slightly damaged my phone screen. 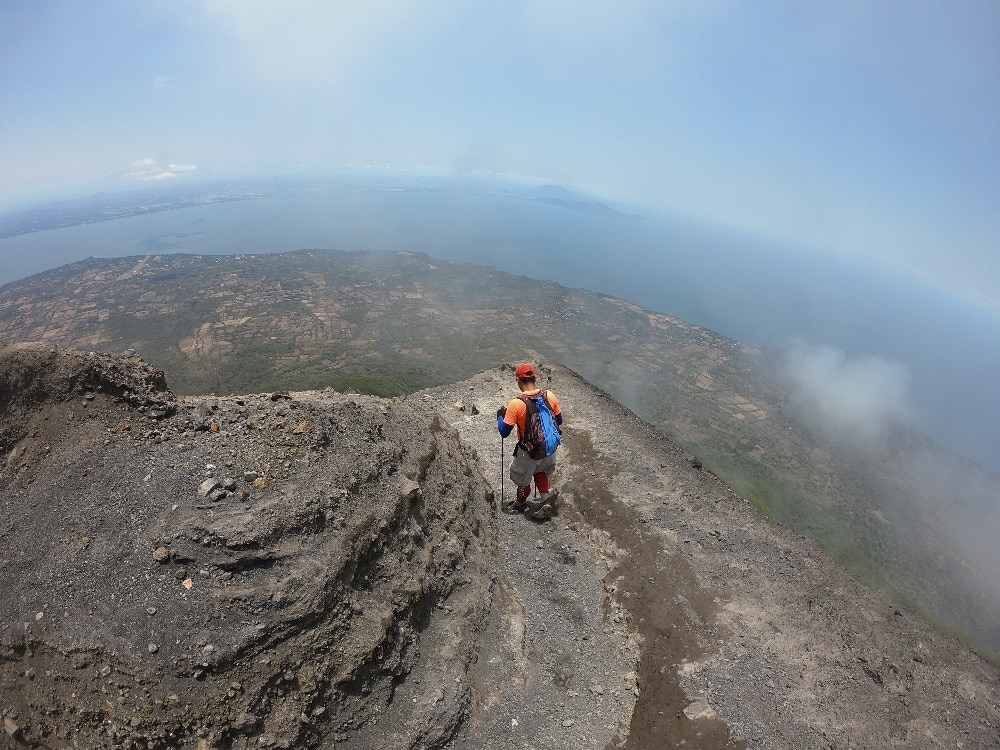 We finally made it back to Lookout Point. I felt like the hike was over since the most difficult part was over. I forgot how far it was down the shaded part of the volcano. We still had two more hours to go, and I was toast at this point. This section was still difficult even going downhill. It was also easy to slip on loose stones on this part of the trail, which I did several times. Another group was hiking with us at this point and they had a few falls themselves. 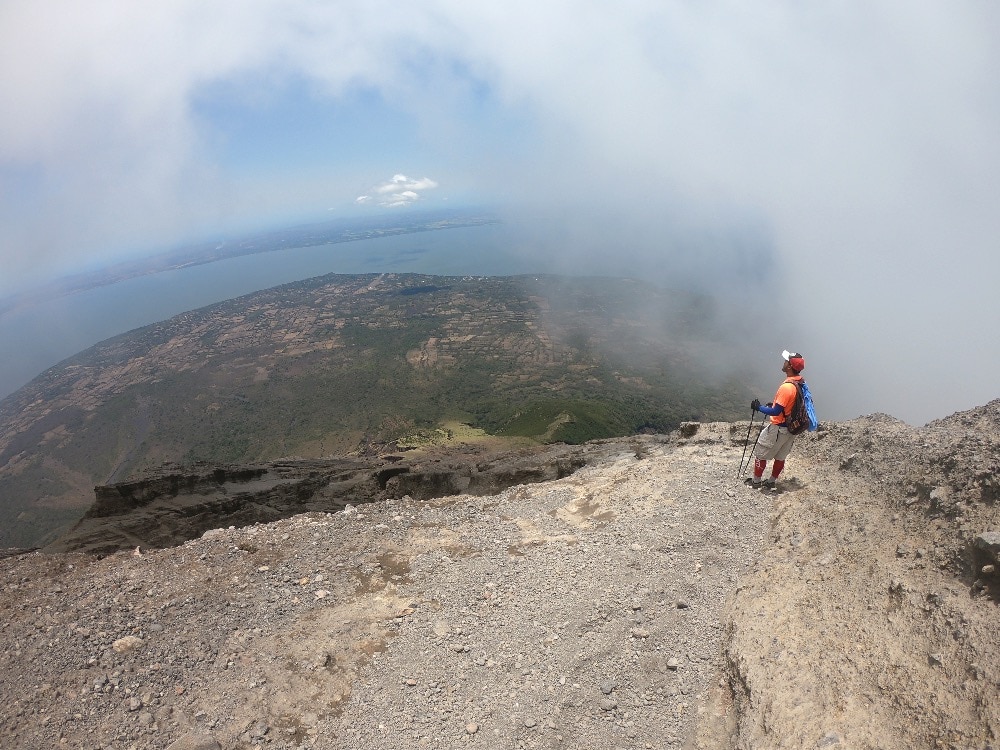 Roger enjoys the view while waiting for me to catch up

We finally got back to the base of the volcano and then back to the little house that sold drinks. I bought a powerade and a Toña beer. I downed the powerade in one minute and then celebrated the end of the hike with the Toña. 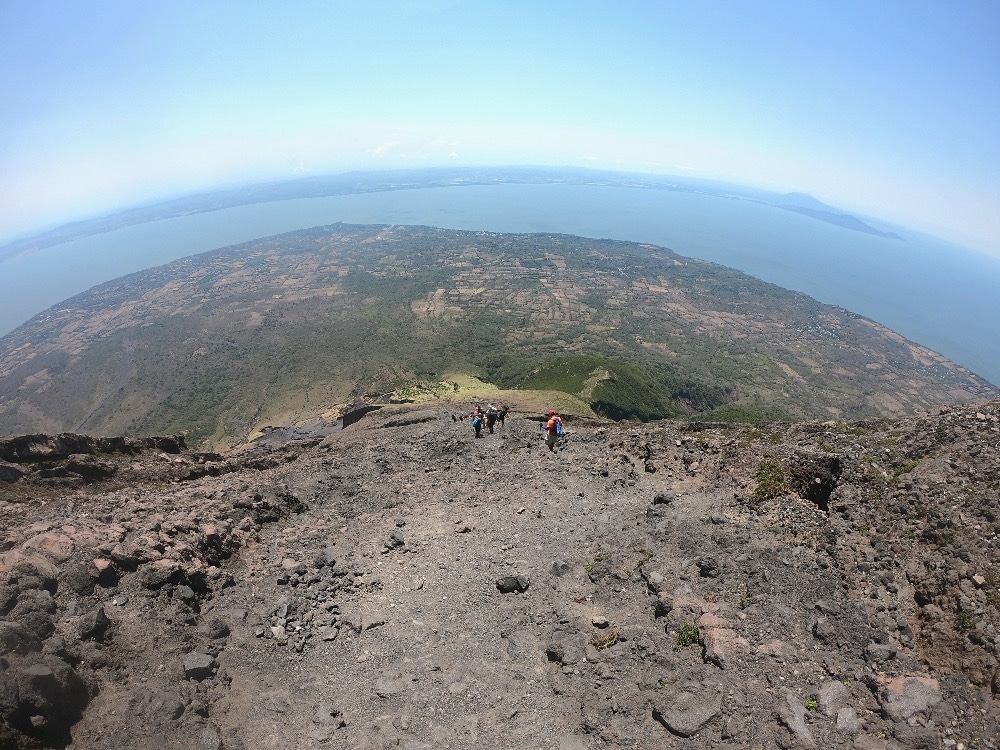 A long way down Concepción Volcano

Back to the guesthouse

We hiked the rest of the section out to the road and then grabbed a tuk-tuk back to town. I retreated to my room where I just lay in bed in agony until I went to sleep. I had a little too much exposure to the sun and felt so hot I could not cool down, so I took several cold showers. It was a tough day with too much hiking, too much incline, and too much sun. I felt great though that I conquered Concepción even though I felt like quitting several times on the way up.

The goal of this site is to inspire people to outdoor adventure travel and then provide tips. If you liked this post then sign up for the email newsletter. Notifications go out once or twice a month with what is new with Traveling Ted’s adventures. Your email will not be share and you will receive no spam. Other e-follow options include Facebook (click on the like box to the right) or twitter (click on the pretty bird on the rainbow above).
.