Brazil in the Chicago Botanic Garden

It thrilled me to receive an invitation to the Brazil in the Garden exhibition at the Chicago Botanic Garden for two reasons. First of all, I have only visited the Garden on their Father’s Day Canoe Paddle adventure. I have guided this paddle with the Friend’s of the Chicago River for three years. Other than that, I have never set foot in the Garden. I longed to check out the Chicago Botanic Garden the way the other 99.99999 percent of the visitors do. If you are one of those 99.99999 percent, then check out the post below.

Reminds me of past adventures in South America

I also looked forward to this visit because I have visited both Colombia and Guyana. These two countries neighbor Brazil, and I loved visiting both. In fact, on my Amazon adventure in Columbia, we traveled up the Javari River. The Javari River marks the border between Peru and Brazil. We hiked on the Brazilian side, although I never got my passport stamped. There is no official Brazil border crossing in the Amazon jungle. I wondered if I would see some flora at the Chicago Botanic Garden reminiscent of my jungle adventures. 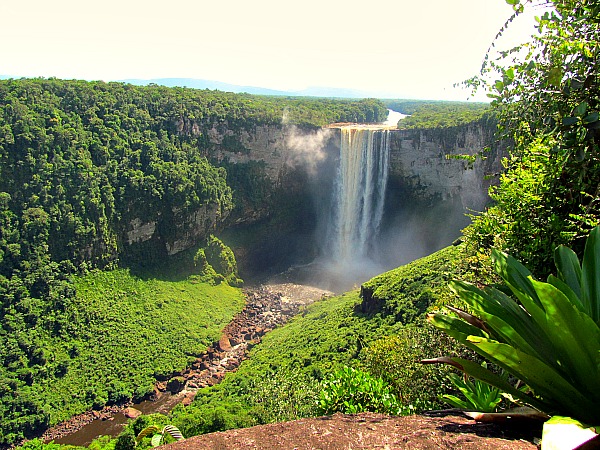 What is the Chicago Botanic Garden Brazil in the Garden exhibit

The Chicago Botanic Garden is paying tribute to Brazil with a diverse range of exhibits. The plant life of Brazil is of course a front and center piece in the exhibit, but the Brazil in the Garden is much more than just flora. Brazilian music is featured with a series of music nights. Brazilian cuisine is highlighted with a Garden Chef Series. The national cocktail of Brazil, the caipirinha, can be enjoyed and consumed in the cafe. An art exhibition in the Joutras Gallery showcases the talents of Brazilian landscape architect Roberto Burle Marx. Marx’s work influenced the layout of the garden designs as well.

Back in the jungle with bromeliads and more

We started our tour with a walk through the Garden outdoor areas. The exhibit is multi dimensional, but the rich biodiversity of Brazilian plant life is the focus, so it made sense to start here. One plant that I remember well from my South America adventures was the bromeliad. I remember coming across these especially in Guyana on a tour of the amazing Kaieteur Falls. It pleased me to see bromeliad towers in the Heritage Garden as a front and center piece for the exhibit. We also saw such beautiful plants and flowers like the Sharon Heliconia and the Inspiration Passion Flower. The Sharon Heliconia is another familiar plant from previous adventures.

Bromeliad tower in the Chicago Botanic Garden Brazil in the Garden

See aspects of Brazil without the malaria

I enjoyed seeing familiar Brazilian plant life. The best part is I did not need to get a Yellow Fever inoculation, worry about malaria, worry about coming across a poisonous snake, nor did I have to pay for an expensive Brazilian Visa. I also did not have to worry about my Portuguese. The staff at the Chicago Botanic Garden all spoke English. While I would love to officially visit Brazil and the above pitfalls of traveling do not bother me, sometimes it is nice when things are easy.

Another positive aspect about seeing a display from Brazil in a Botanic Garden setting was we were able to see a lot of different plants in one area. I did not have to crisscross Brazil to visit multiple ecosystems. When you are in a jungle setting, you see a lot of green. It can  challenge the trekker and their guide in a jungle to see flowers. Here in the Garden, many different varieties were close at hand.

Mike Schulte showing us how it is done

After walking around the beautiful exhibits, we worked up an appetite. Fortunately, the next stop was a demonstration on Brazilian cuisine from Executive Chef Mike Schulte. We had the chance to enjoy a coconut flavored pastry called Quindim and a tasty appetizer called Pay de Quejo, which is Brazilian cheese bread with chimichurri sauce.

We heard several accounts how the Chicago Botanic Garden coordinated the exhibits. It took over a year for the Brazil in the Garden to come together. One of the focal points of the Brazil in the Garden was the work of Roberto Brule Marx. We walked into the Joutras Gallery and the beauty of the textiles immediately stood out. Marx was most noted as a landscape architect. He also painted and created amazing textiles, so he possessed many talents. This is the first time these gorgeous textiles appeared in public.

Tillandsia are air plants. We had the opportunity to make a Tillandsia Tower and take it home with us. This was a fun interactive program. We put in the soil, added the bottom plant, and then glued and secured the air plants to the tower. It was a fun end to our adventure through Brazil in the Chicago Botanic Garden.

Tillandsia Tower in the Garden

Making my own Tillandsia Tower

I did receive complimentary access to the Chicago Botanic Garden along with some other cool swag, but it did not influence my experience. Thoughts, opinions, photos, and love of Brazilian flora are purely my own.