I have been visiting the Door County Adventure center booth at Canoecopia for several years now. Each time I drop by, I talk to the owner Tim about Door County kayaking adventures and the possibility of visiting. Then it does not happen, and the cycle is repeated the next year. 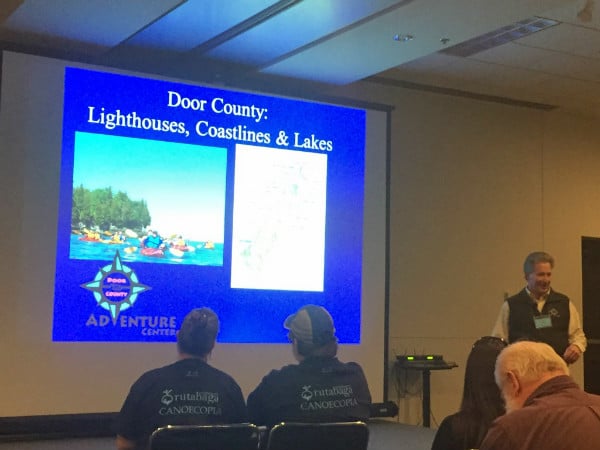 I decided this would be the year, so I resolutely sent Tim an email about coming up in early July. He replied that he had a guided kayak tour for Washington Island planned. I packed up the car and left Chicago on Friday evening. 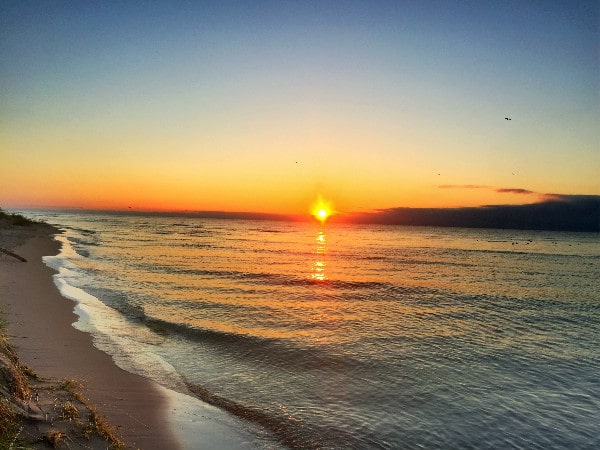 Waking up to this at Kolher-Andrae State Park

My first stop was Kohler-Andrae State Park just north of Milwaukee on Lake Michigan. The next morning I awoke to a spectacular sunrise over Lake Michigan and then headed north. I stopped a couple of times along the way to take pictures of shoreline and of Sturgeon Bay then reached the end of the Door County Peninsula. 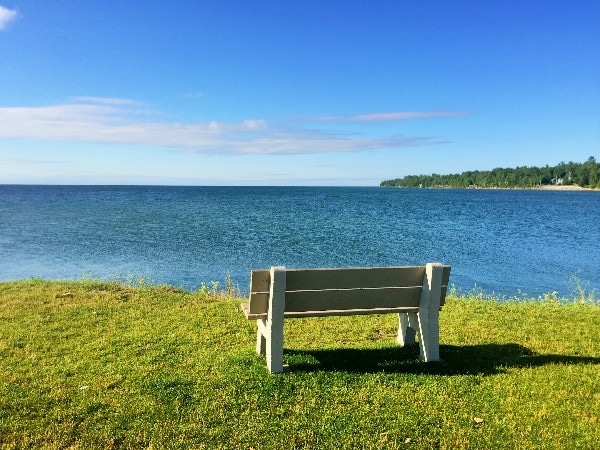 My first scenic view of Lake Michigan and Door County

I discovered an email from Tim. He said to give him a call as plans had changed. The trip began in Europe Bay instead due to an intense northwest wind. The wind was so severe it impacted the direction the ferry. This meant the northern tip and the eastern shore at Sister Bay would be completely out of the question.

Related article: 23 Amazing things to do in Door County

Putting in at Europe Bay with Door County Adventure Center

Europe Bay is part of Newport State Park, and there is a landing there. Tim gathered the 15 plus sea kayakers for a brief talk.

There was no option for single or tandem kayaks as all of us were solo. All were sea kayaks and there were no sit on top options. There were no clear bottom kayaks in the group.

There were four instructors present and the rest varied in experience from experienced to novice. Tim asked about my kayaking experience on the phone, and I mentioned a previous sea kayak experience on Lake Erie, but admitted I was more comfortable in a canoe. 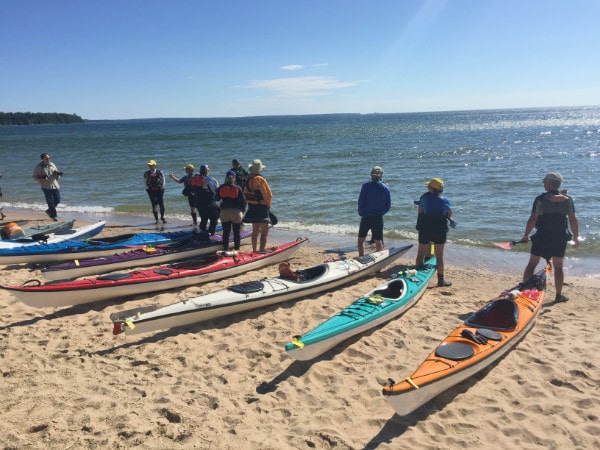 We all got into our kayaks, and Tim helped me get into mine. He then gave brief instructions about where to put my legs.

There were braces on the side and foot pedals at the end. He held the kayak for a few minutes while I got adjusted. It was a lot tippier than I remembered it. 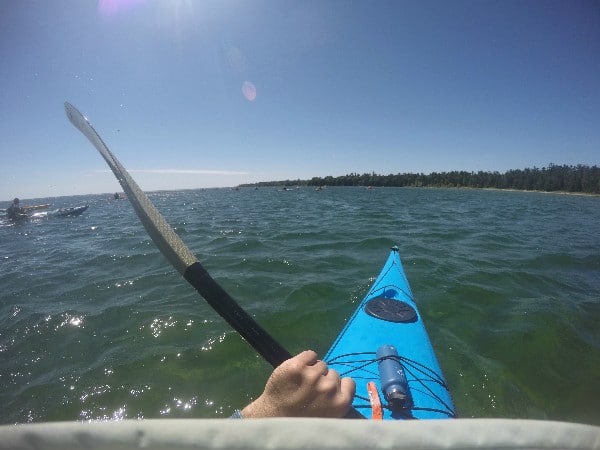 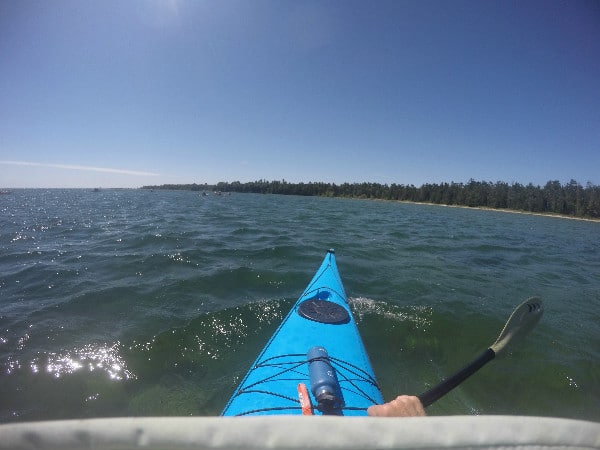 The first thirty minutes were a little hairy. Two foot swells were coming at us sideways. This was a tough baptism to experience while getting adjusted to the kayak; however, I began to feel more at ease halfway through this stretch. Eventually, I even began to enjoy the chop.

Once I felt more comfortable, I could appreciate the views better. The views of Lake Michigan and the shoreline were absolutely gorgeous out here. Just like in Traverse City, Michigan, the lake was a brilliant azure blue.

Furthermore, we were being followed by groups of white pelicans flying in formation and solo Caspian terns. We also saw two bald eagles. This should come as no surprise as there are more than one wildlife refuge protecting flora and fauna along the coastline. 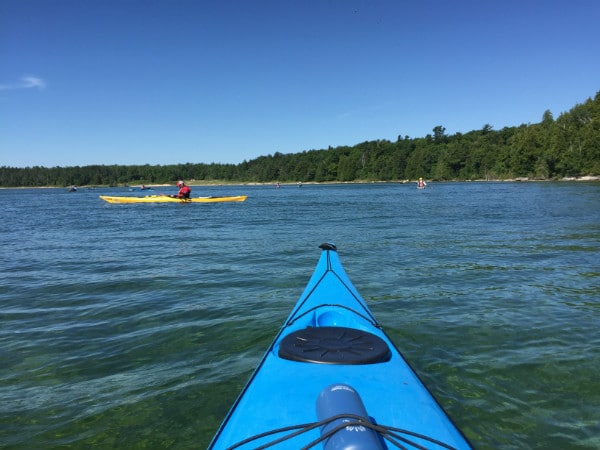 Once we turned more southward toward the main part of Newport State Park, we lost the wind and the paddling became easier. This nice thing about sea kayaking Door County is there is always a place for lakeshore adventures. No matter which way the wind is coming, there is always a calm bay somewhere as there are two coastlines to choose from as well as inland lakes to paddle like Kangaroo Lake and Clark Lake. 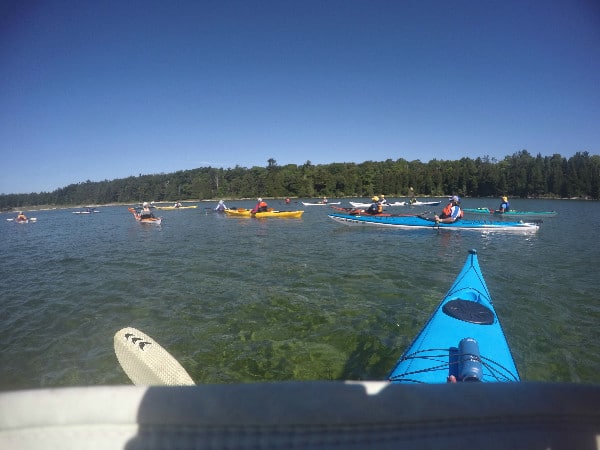 We then huddled up in the calm bay and Tim divided us into four different groups. Each group had an instructor teaching a different lesson. I opted to go with John who taught the stern and rudder technique.

This is a technique one can use to control the boat while surfing a wave. Since we just rode some pretty good waves coming in, I thought this would be a good option.

We paddled back to where the waves were coming in and John showed examples on how to catch a wave and then control yourself using the stern rudder. It was a lot like regular surfing. 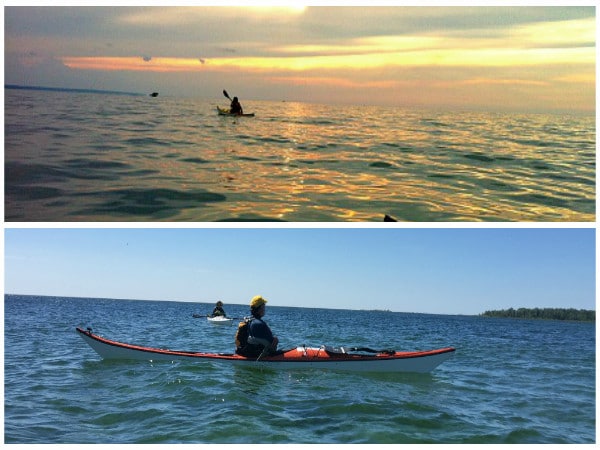 In the midst of the instructions, John was talking to another kayaker in the group while I was at a distance practicing the stroke. I overheard him say something about an outfit in Cleveland, so I paddled over and asked which outfit, and he said 41 North.

I paddled with this company when I sea kayaked Lake Erie. It turned out that the guide that I had on that trip was his son, Josh. The paddling community is a small world.

Related: A sunset tour kayaking to the Cleveland skyline

Lunch at Newport State Park and then more paddling

We then stopped for lunch on a rocky shoreline on other side of Newport State Park. I enjoyed a brief swim on the shoreline as the water was pretty cold. Before getting in the kayak, I took a picture with Ken from Liquid adventuring. 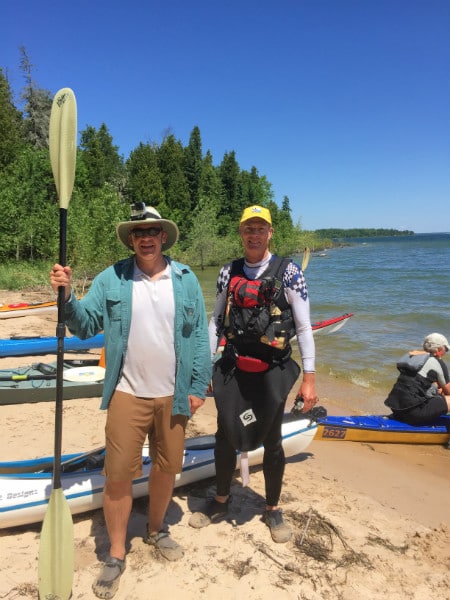 Turned out I was not the only travel blogger on the trip and more proof that it is a small world. Ken and I follow each other on Instagram and neither of us knew the other would be on the trip. 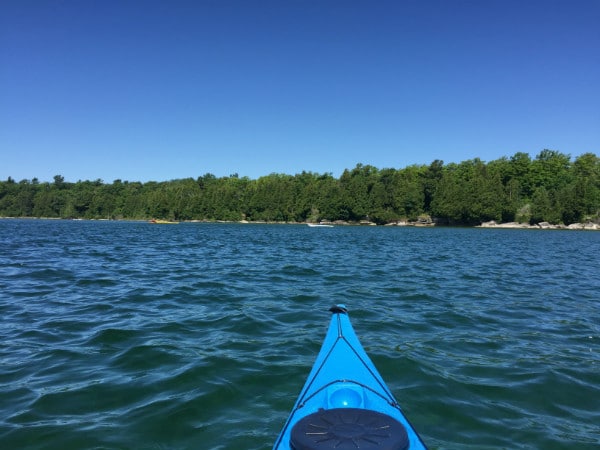 Then we returned to our kayaks for more paddling. We paddled for another hour or so and then took another break for more instruction. Tim demonstrated a dead man rescue where you can pull an unconscious person upright from a capsized position with one hand.

It was impressive and Tim showed some strength and leverage, for he managed the maneuver quite smoothly. Seeing this made me feel quite safe paddling with Door County Adventure Center. The instructors are great teachers and they really know what they are doing in case of an emergency.

We had one more tough section to paddle before calling it a day. We had to paddle across Rowley’s Bay to the resort where the tour ended. This left us farther north from Baileys Harbor and Cave Point County Park.

Only problem was the wind was creating white caps across the bay. We could either paddle straight across or paddle along the coast for a while and then cross. We decided to continue up the coast in hopes it would make the crossing easier.

This made the trip go a little longer, which I was all in favor of. Finally we opted to cross, and in another half hour we made it. We arrived at 3 p.m. What a great day of kayaking with Door County Adventure Center. 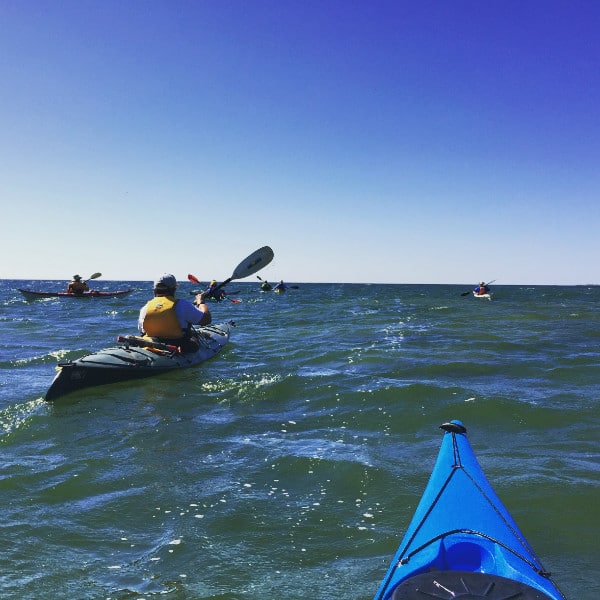 Door County was worth the trip

My trip was partially sponsored by Door County Adventure Center as I received a complimentary tour, but I cannot say enough good things about the trip. The quality of the kayaking, the scenery, the bird life, the leadership from Tim and other instructors was all top notch. Check their website here.

They offer all types of opportunities to get out on the water including Door County kayak tours like a sunset kayak tours and a shipwreck tour, paddle board rentals, lessons, and workshops. Door County Adventure Center also has a zip line course, so there is so much to do.

Traveling Ted newsletter
Your information will *never* be shared or sold to a 3rd party.
1shares