I have always enjoyed fishing, but most of my outings have taken place in inland lakes and rivers. I never had the opportunity to fish on one of the great lakes or done any deep sea fishing. Thanks to my time in Traverse City, I finally got a chance to experience big water fishing. Traverse City lake trout fishing turned into a highlight of my time in Michigan and one of my highlights of the year. 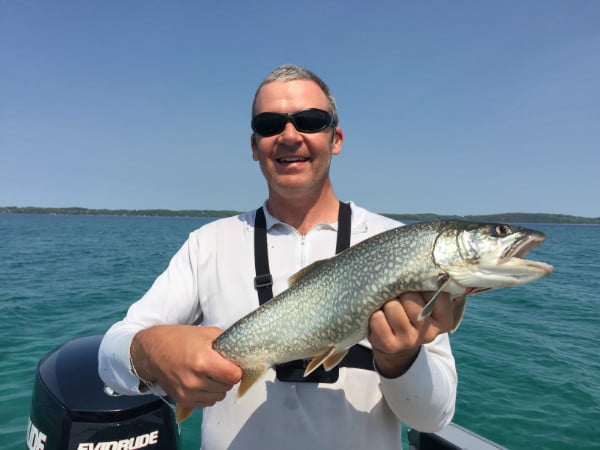 Fishing the bay between the peninsulas in Traverse City 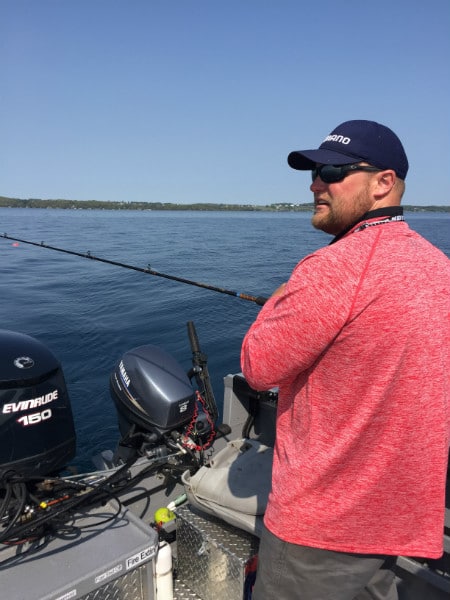 We fished the East Arm of Grand Traverse Bay between the Old Mission Peninsula and the mainland. Sunshine, clear skies, and virtually no wind greeted our departure. Catching a lake trout turned out to be a second first for me. I caught brown trout in Colorado last year and speckled trout ice fishing in Montreal, but I have never landed a laker. 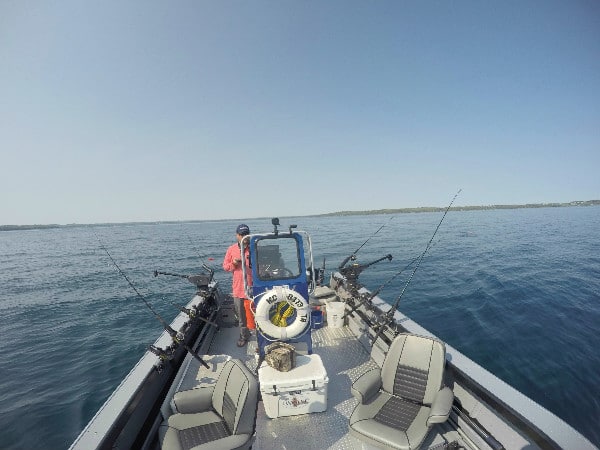 Cisco fish is a good friend of mine

We pulled out of the landing and headed to the middle of the bay. Excitement began to build as we cruised through the clear blue water of Lake Michigan. Chad had some good luck the day before and caught some beautiful lake trout, so we felt confident for similar good fortune today. We began to troll, and we did not have to wait long. We first pulled in a couple of cisco fish. Cisco resemble whitefish both in appearance and in quality of taste, so cisco fish became a friend of mine. I looked into the crystal clear water of Lake Michigan and could see the silver side of the fish fighting from deep down in the water.

The view from the middle of the bay could not be beat. One gets a different perspective from being in a boat. The scenery anywhere in northern Michigan impresses, but views on the water offer something extra. I could only imagine what it must be like to fish the shoreline of Sleeping Bear Dunes. The outfit I partnered with in Traverse City, Sports Fish Michigan, operates the only guide service for that shoreline. 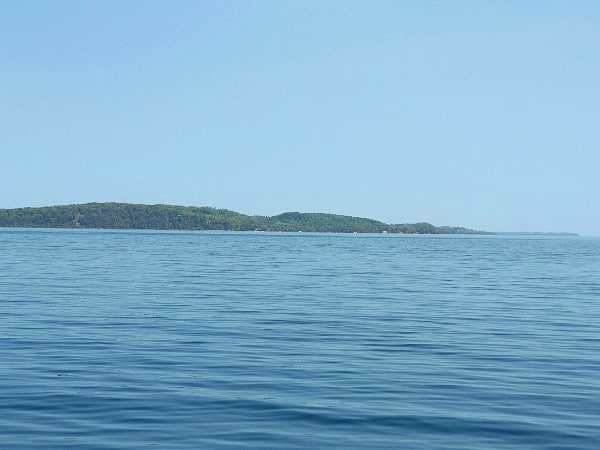 The action picked up dramatically afterwards because in a matter of minutes we caught three lake trout. In fact, we hooked two back-to-back. As soon as we netted the first, I picked up the second rod and began reeling in another spectacular lake trout. See the GoPro video below for the non-stop action. A permanent grin became etched on my face. 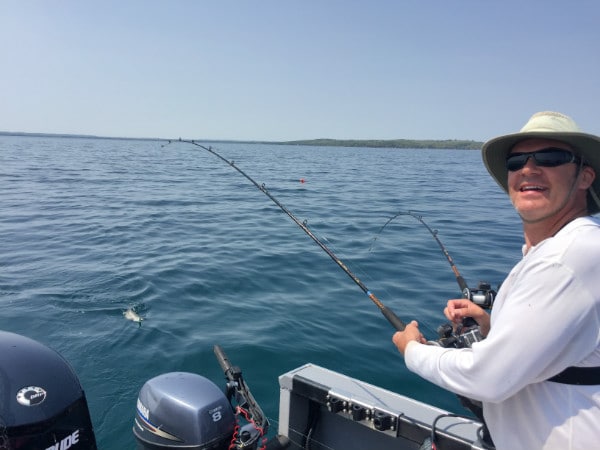 I could not believe what an awesome adventure Traverse City lake trout fishing turned into. In fact, the quality of fishing in the area in general surprised me. The fishing here was as good as or better as the fishing I have experienced in Canada. The day before, I enjoyed a productive day catching smallmouth on Long Lake. 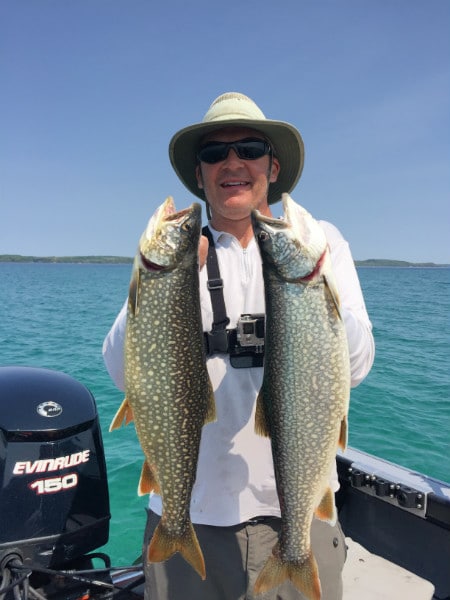 From trolling to jigging

We then switched from trolling to jigging. I enjoyed this strategy because I could fish with one hand and drink a beer in the other. I liked it even better when I landed another couple of ciscos. When we jigged, we switched from bait casters to spin reels. I preferred this transition because you could really feel the fight of the fish on the spinning reels. 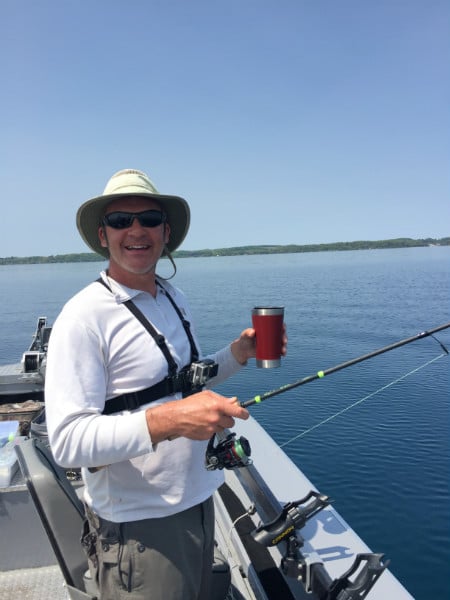 I can get behind this jigging thing

We had three nice lake trout, which almost got us our limit coming up one short; furthermore, we caught several ciscos. Chad got the electric filet knife out, and I soon had a cooler full of fish fillets. I grilled several lake trout over the campfire that night while camped at Sleeping Bear Dunes National Lakeshore.

Chad suggested a little butter and lemon pepper garlic salt to accompany the fillets. When Chad filleted the fish, he kept the skin on one side, and instructed that I should grill with the skin side down. With the bigger fillets, I ended up flipping to get the middle cooked, but I only had to flip for a few minutes to complete. 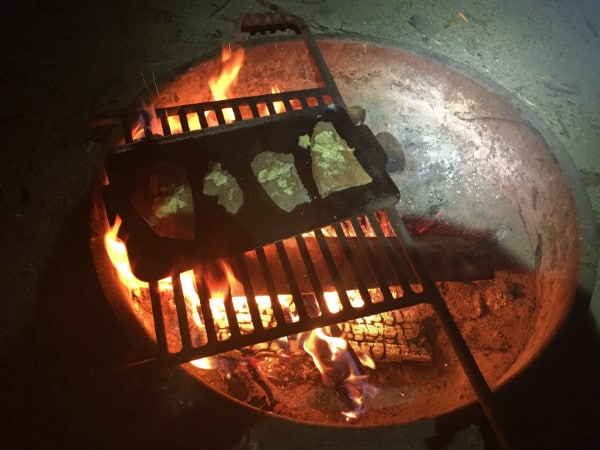 The fish tasted absolutely amazing, which did not surprise as fresh fish coming out of the ice cold water of Lake Michigan cannot be beat. When I looked at Lake Michigan in Traverse City, I had a hard time believing it is the same lake found in Chicago due to its pristine water quality.

Disclaimer: The Traverse City Tourism Bureau partially sponsored me taking care of my tours and lodging, but the views in my posts are my own and are not influenced by sponsorship of any kind. My posts reflect my experiences during the adventures.