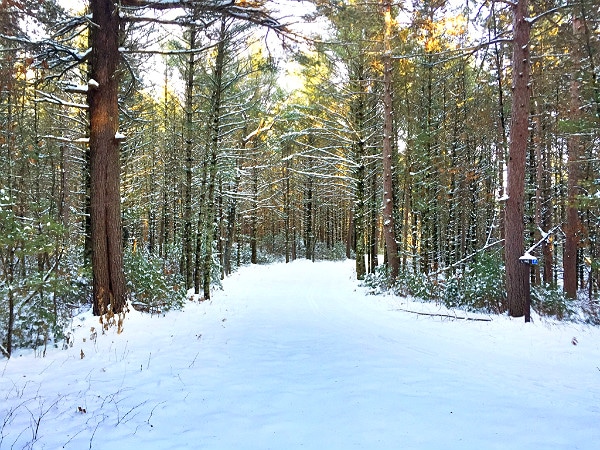 Starting at the Smrekar Trailhead

The Black River State Forest Wildcat Trails are aptly named with one ferocious hill after another. I have always enjoyed the Smrekar Trails, but they are kind of tame in comparison with marginal hills with a few good downhill straightaways. There is one outstanding hill on this trail system that descends from the scenic overlook. 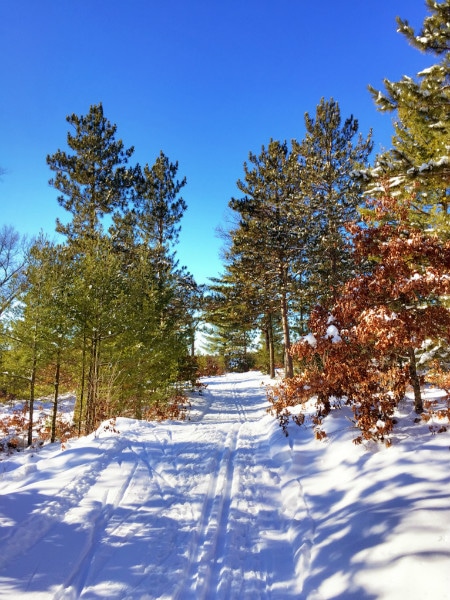 There are several hills of this magnitude on the Wildcat Trail system. It is easy to get to these trails. There is a separate parking lot, so you can start here or you can ski from the Smrekar Trail system and cross over to the Wildcat system on a link trail. It makes for a long day if you do this. 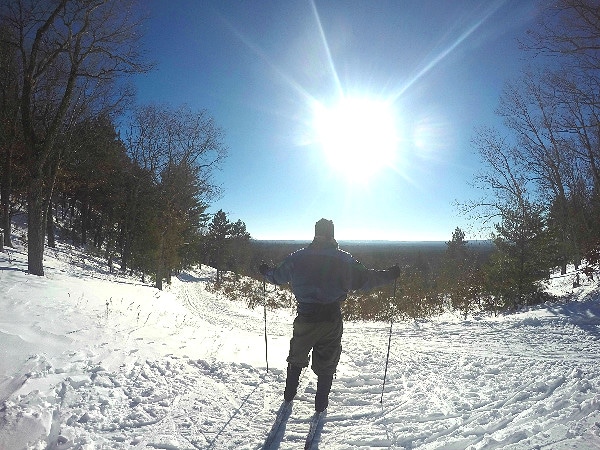 I started at the Smrekar parking lot and kept skiing the outer loops. I started on the Central Trail and then looped around on the Northern Trail to the link that crossed over the road to the Wildcat Trails. For a more direct route, you can just stay on the Central Trail.  See the map of the cross-country ski trails in the Black River State Forest here. 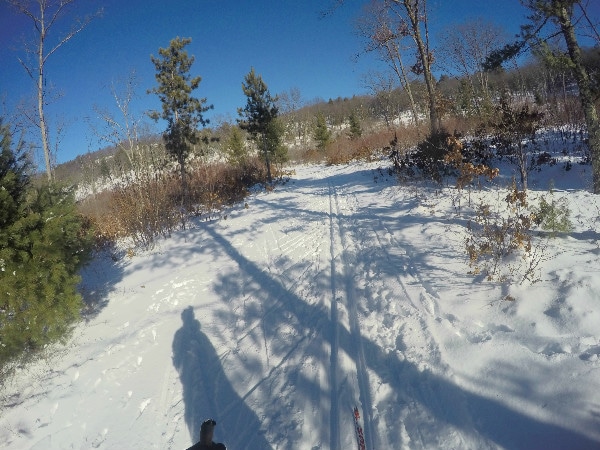 I then skied the Norway Pine Trail and the Wildcat Trail on the northern side of the park. These two trails were outstanding. It was a constant up and down with some really steep downhills. I rarely crash, but I took two tumbles on these trails. One was on a very steep hill. At the bottom of the hill other people had crashed and the snow was kind of thin in the first place, so the ski lanes were kind of uneven. I could not keep my balance going so fast, so I crashed. It was the agony of defeat and caught on the below video.

I then crashed again a few minutes later. Normally, I would have made the hill with no problem, but about a third of the way down the hill was a post with a map of the trails, so I wanted to see where I was on the map. I snowplowed in order to stop, and when I scraped into the snow my skis caught a tree branch, and I tumbled over. 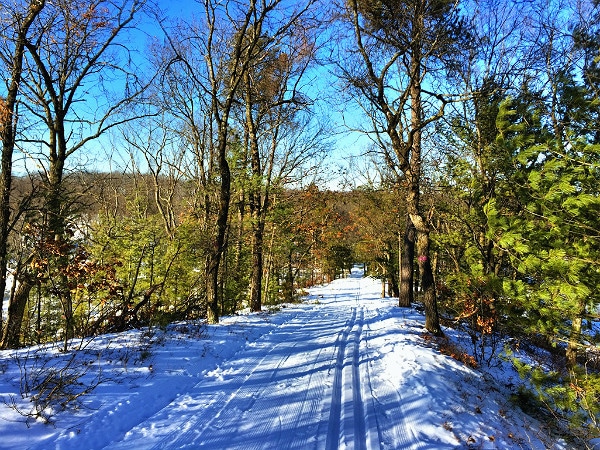 The snow was deep enough, but there was a lot of debris on the trail created by either white-tailed deer or wild turkey or both that were bedding down near the trails. They like to dig holes in the snow and even on the ski trails and drag leaves around. The ski lanes were also pockmarked with deer tracks in places. 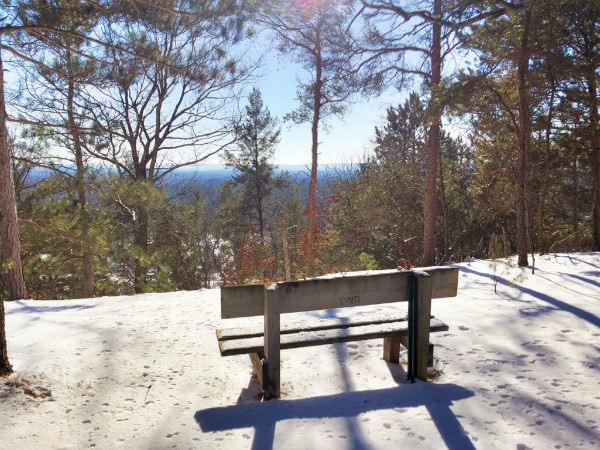 The scenery was outstanding with many views of the surrounding forest and many scenic overlooks of the hills and pine trees in the distance. This area is one of my favorite places in Wisconsin and is great for both winter and summer adventure. The beautiful Black River snakes through here and is one of the best canoeing streams in the state.

When I made it back to the Wildcat parking lot, I had to ski back to Smrekar. I continued to loop around the North Trail back to the Central Trail and back to my car. It took over three hours, and I was completely exhausted. This trail system is a great training ground for the American Birkebeiner. 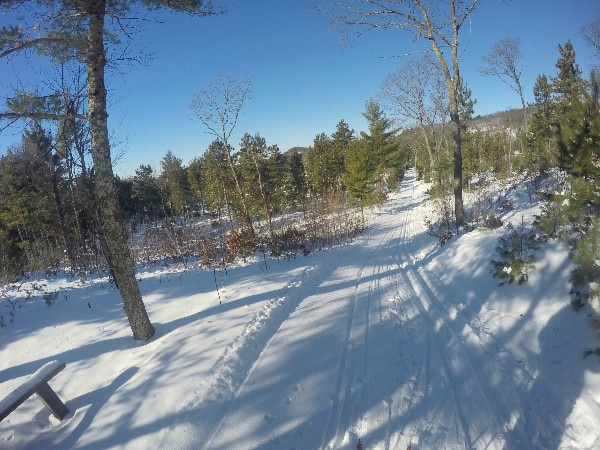 Had the trails to myself

The amazing thing is I saw absolutely no one on the trails. The only place I saw people at were in the parking lot. There were about ten cars at Smrekar and about three or four cars at Wildcat, but I did not see one skier on the trails.

With so many great places to ski in Wisconsin, is is easy to forget the Black River State Forest, but now that I have finally discovered the Wildcat Trails, I will definitely be back. Next time I hope to avoid the agony of defeat. 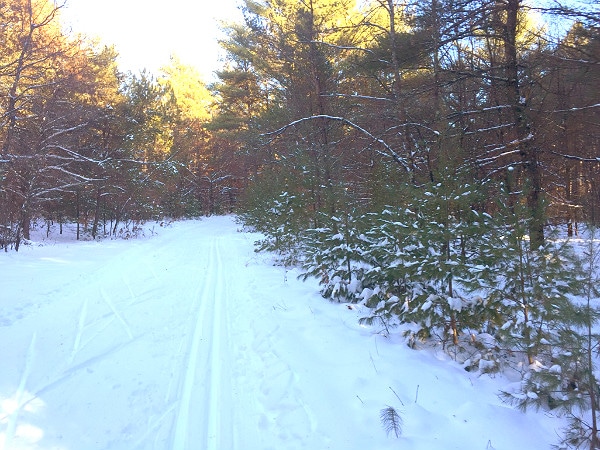 I skied these trails with Madshus skis who were kind enough to offer me a great deal on their skis.