Colombia owns the distinction of having the highest number of bird species of any other country with an astonishing total of 1,871. This was a major draw for me to visit, and although I did not see them all, I did see a decent number since I visited both the Amazon region and the Caribbean coast. This Colombia bird photo essay only shows half of the birds I actually saw. 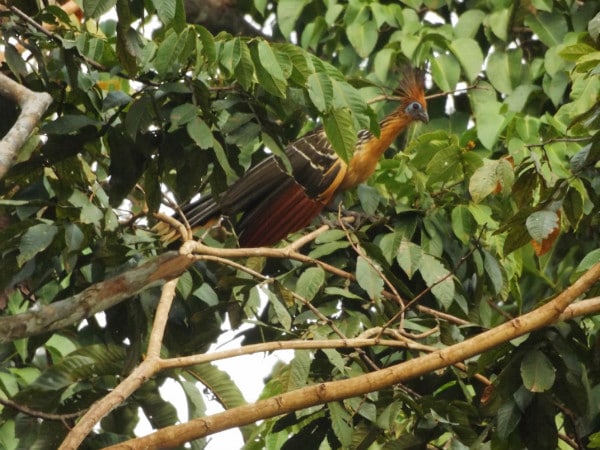 Read: How to book an Amazon River tour in Lettuce

I arrived in Bogota and spent one night in the country before heading out to Leticia for the Amazon River. This was a bucket list experience and seeing so many birds was one of the best parts. I was a little disappointed we did not see any toucans, macaws, or trogons, but we made up for it with many birds of prey and my favorite the hoatzins. Hoatzins are like these mini peacocks that live in the trees. One of our activities was paddling around a freshwater lake in the morning. They were in the trees, and I got some great shots. 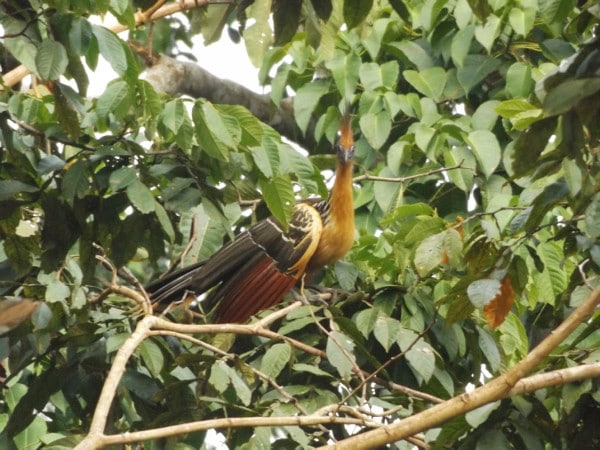 Getting the stare down from a hoatzin

We stayed at the Zacumba Rainforest Lodge on the Yavari River – a tributary of the Amazon. We were actually in Peru about an hour boat ride from the Amazon. The Yavari forms the border of Peru and Brazil. The trip was based out of Leticia, Colombia. Some of the best bird watching was done from the boat as we skirted the river’s edge. We saw many bird’s of prey as well as kingfishers, herons, and egrets. In fact, I wish we would have done more bird watching from the boat because when we trekked in the jungle, we hardly saw anything. 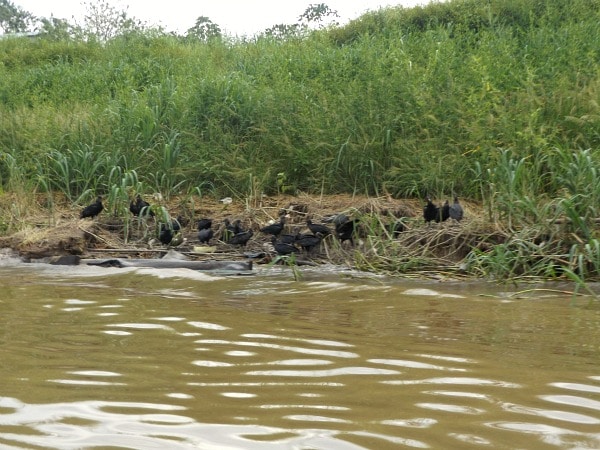 The most well represented bird seemed to be the black vulture 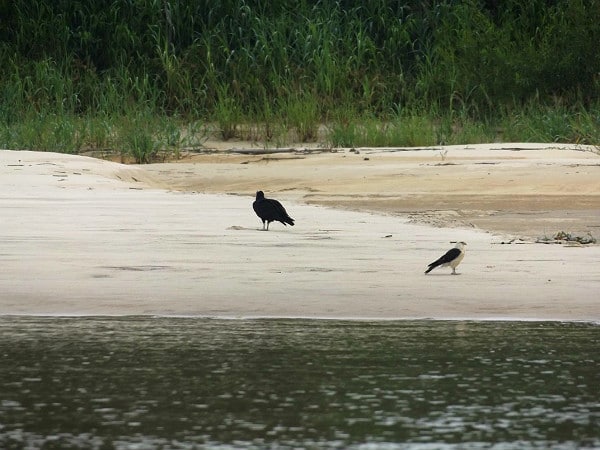 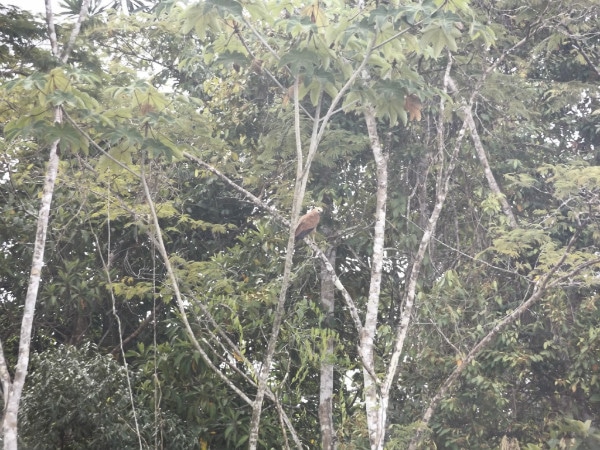 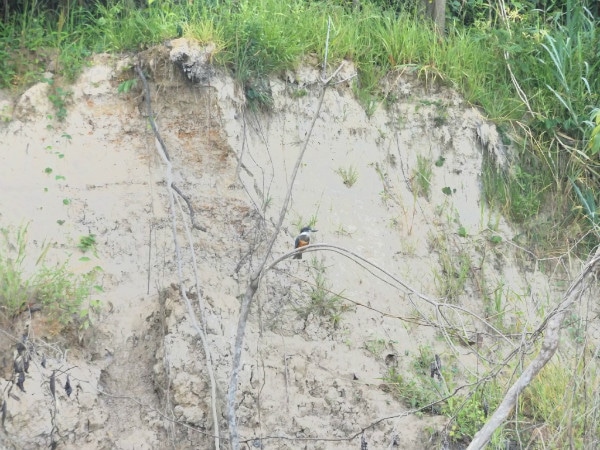 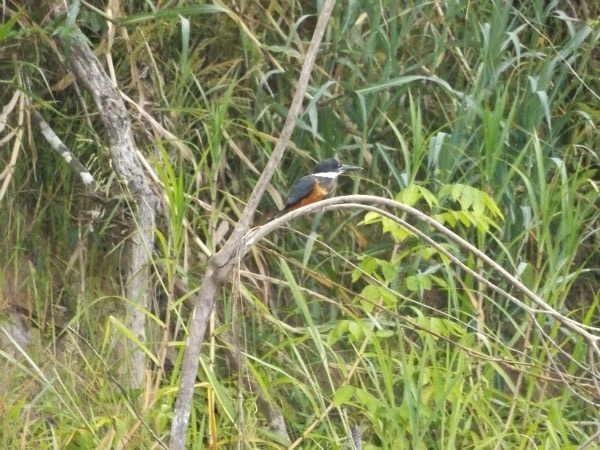 Another shot of the belted-kingfisher along the Yavari River 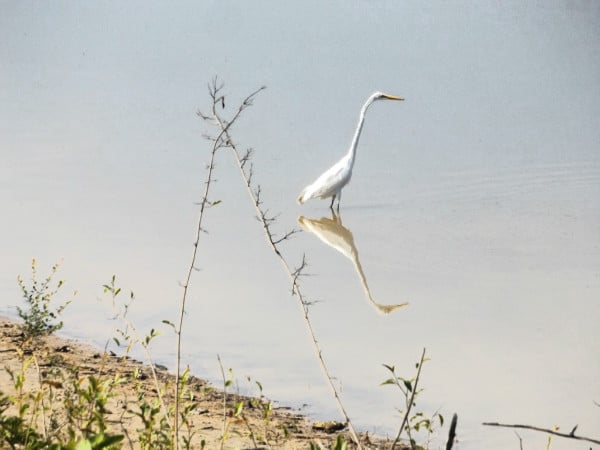 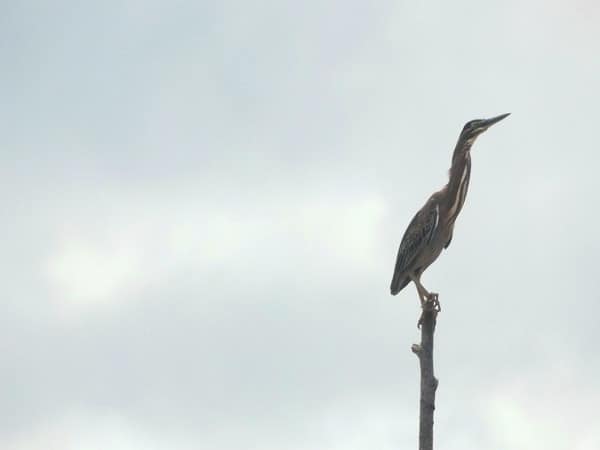 It is always interesting to go halfway around the world and see birds you have seen in your own backyard among the more exotic types. Belted-kingfishers, green herons, and egrets I see in the Chicago area, and there was an osprey that kept flying up the river right in front of our lodge. I have seen osprey close to Chicago, and in fact, they are trying to reintroduce them to the Chicago River by putting osprey platforms along the river. 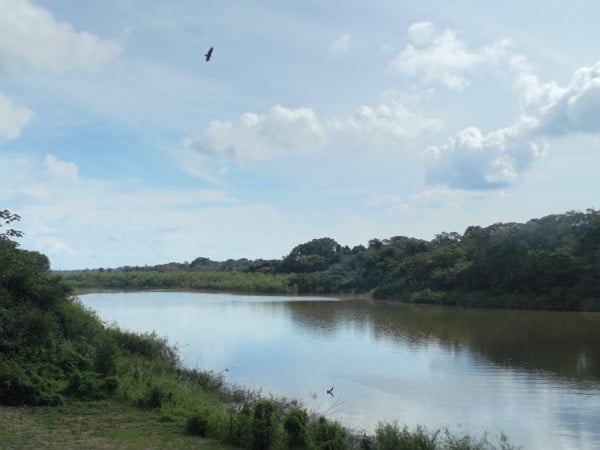 As I mentioned earlier, when we went trekking in the jungle, we did not have much success seeing birds. We did come across a couple. We saw an exotic kingfisher in a backwater swamp and a couple of beautiful jacamars on a tree in one spot. Other than that, it was slim pickings. It was the dry season, so that may have played a part in the lack of jungle birds. It is never easy to spot birds in the jungle in the heat of the day anyway as they tend to hide and stay cool and come out more in the evening and morning. 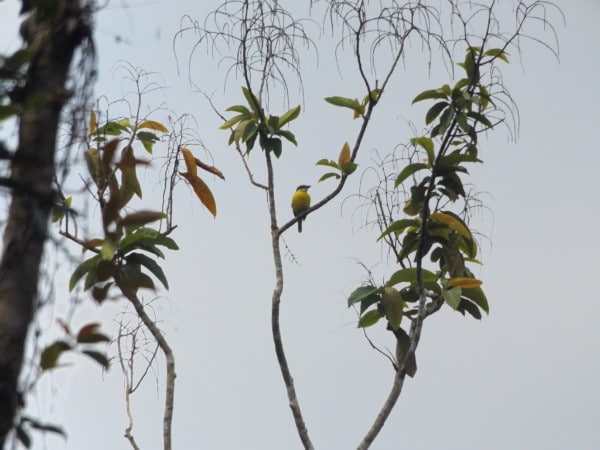 Colombia bird photo essay – My guess is a social flycatcher 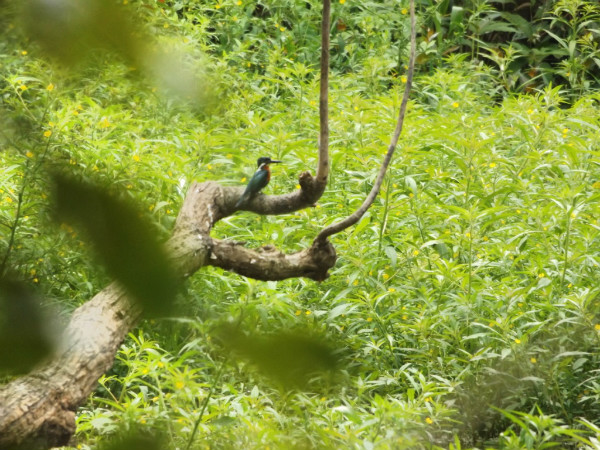 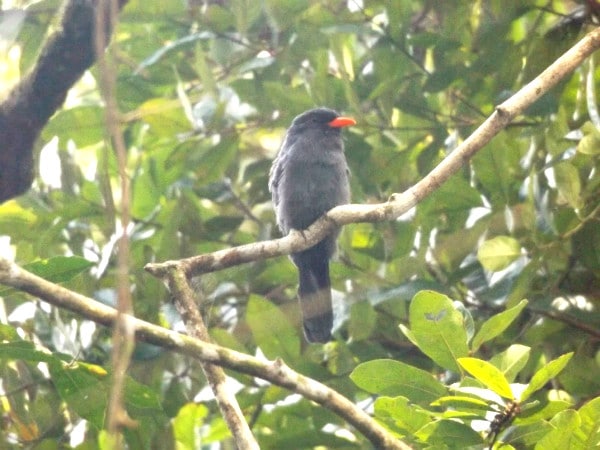 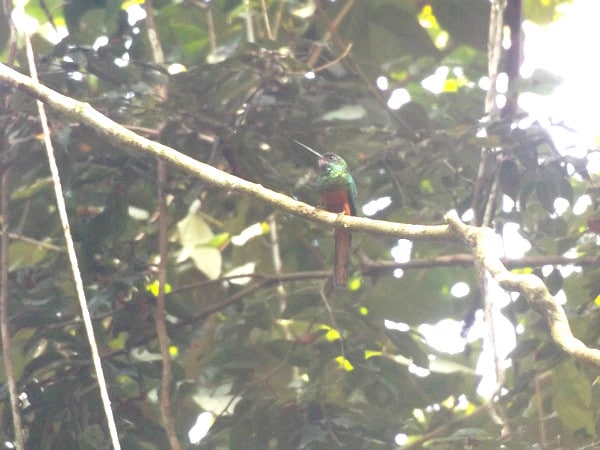 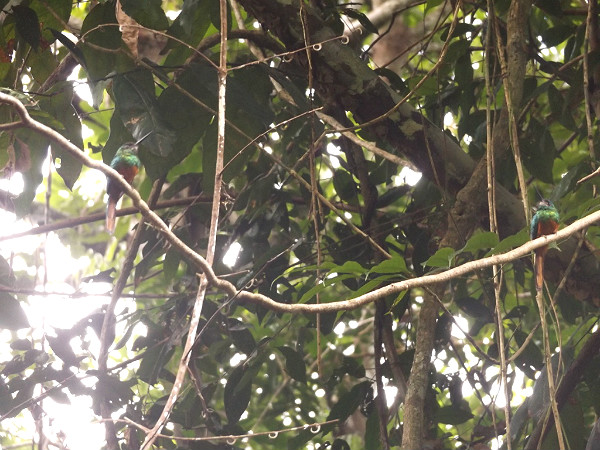 Then there were two rufous-tailed jacamars 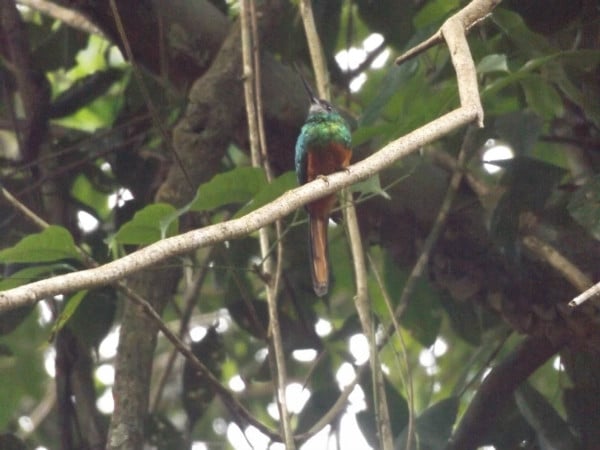 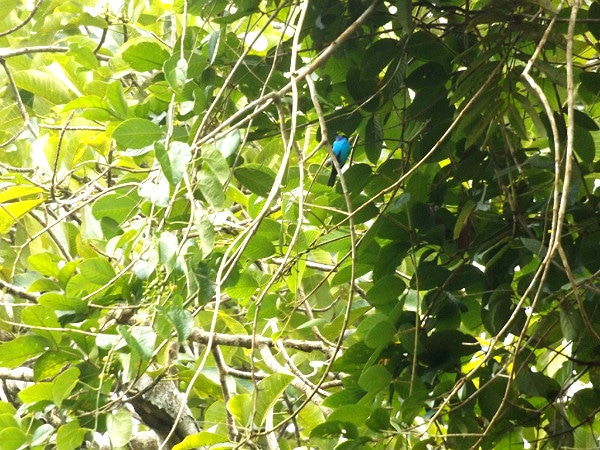 Colombia bird photo essay – My guess is a black-faced dacnis

Birds all over Colombia

With over 1,800 species in a country, birds can be found everywhere. I saw birds out the window of the bus and car, birds flying over the swimming pool at the hotel, and even birds in the middle of big cities. I saw several hawks while riding in a car in Bogota. 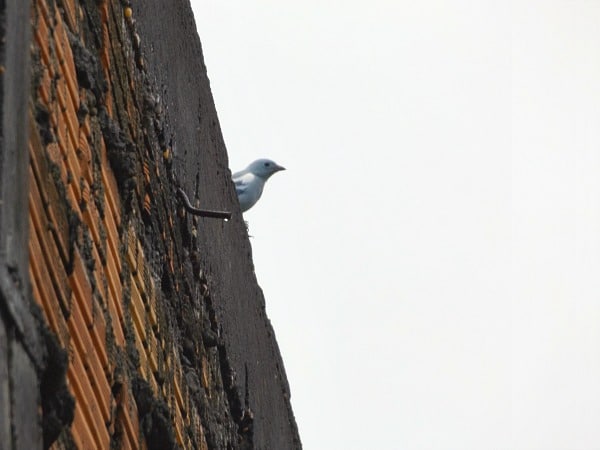 One of the main reasons I decided to visit the Caribbean coast was Tayrona National Park. Unfortunately, this place was unexpectedly closed during the month I was there. I decided to still come down and visit this part of Colombia because of Cartagena, and I figured nearby beaches would be just as great. Although it was disappointing that Tayrona was closed, I made the best of my time here including a nice visit to the Valencia Waterfall. 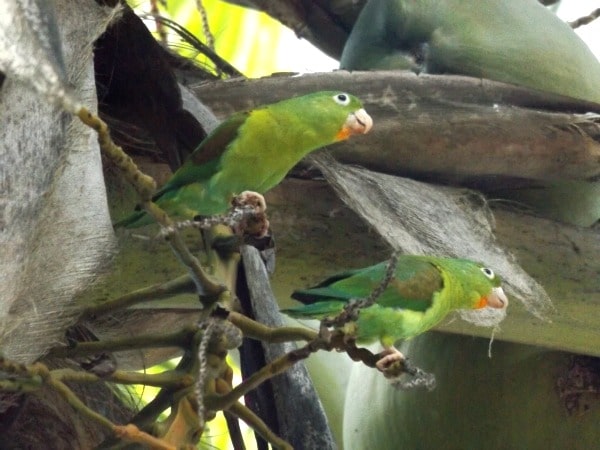 I stayed at the Tayrona Tented Lodge and the bird life here was fantastic. One thing I missed while in Leticia was the gathering of the parakeets at dusk in a local park. I arrived too late the last night I was there and although I heard them, I was unable to photograph them. At the Tayrona Tented Lodge the parakeets gathered in the hundreds near well before dusk, so I did not feel like I missed anything since I could photograph them from my front porch or from the hammock. 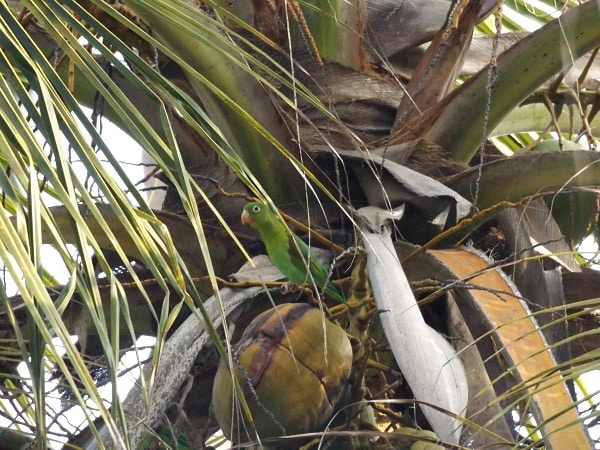 One of the many parakeets found at the Tayrona Tented Lodge

I also saw caracaras, frigate birds, interesting woodpeckers, pelicans, and some other cool birds of prey as I relaxed on a hammock looking out at the beautiful beach. I was not able to get a lot of photographs of these birds as many were far away. 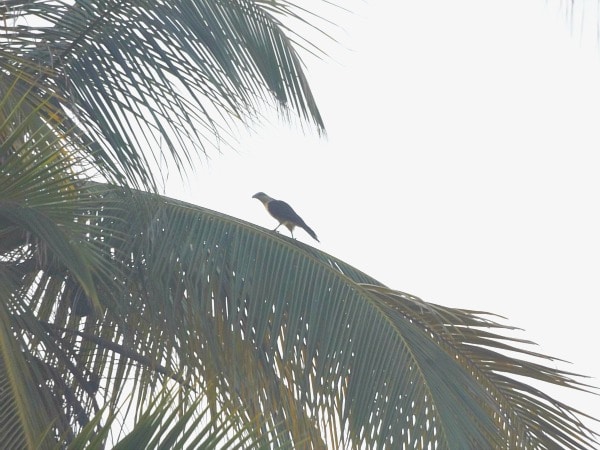 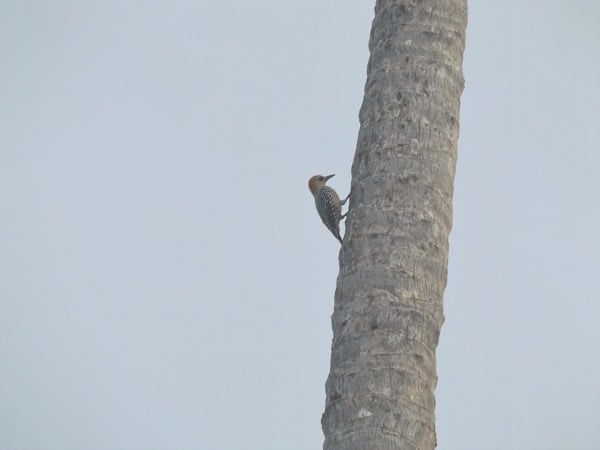 Red-crowned woodpecker on a coconut tree 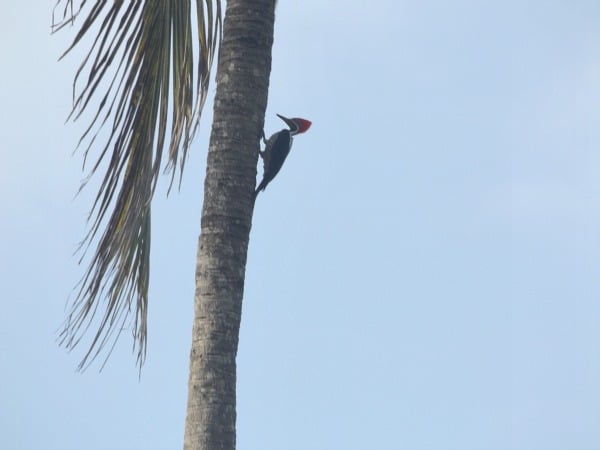 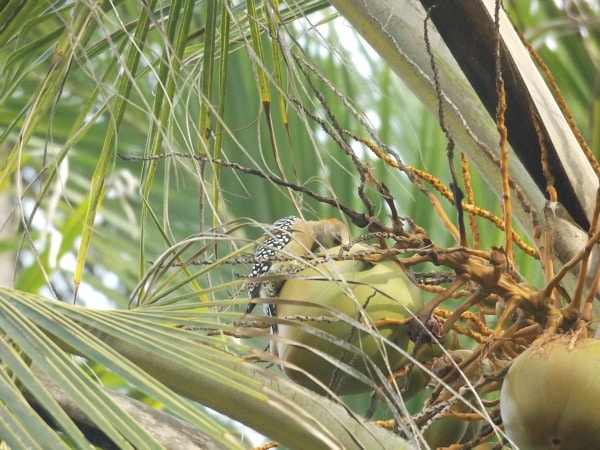 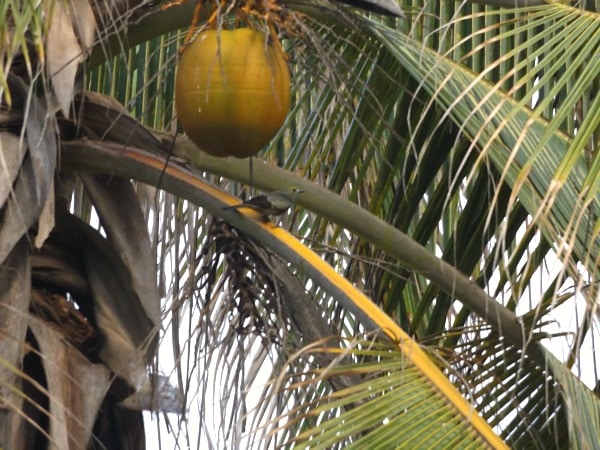 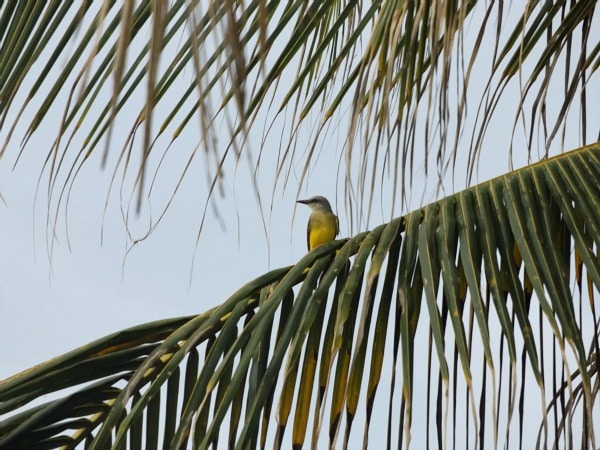 Also not sure of this one – Perhaps a cattle tyrant

As you can tell from the doubt infused photo captions, I am not a birding expert.  I am especially not a Colombia bird expert. I have a difficult enough time keeping straight the 300 or so birds in Illinois let alone 1,800 from another country. If you disagree with any of my findings as far as the bird names, I would be more than glad to know. Please feel free to leave a comment.  I leave you with one more photo from the hoatzin. 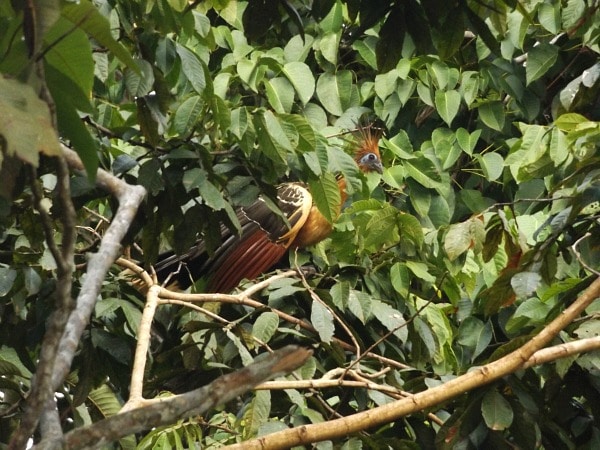