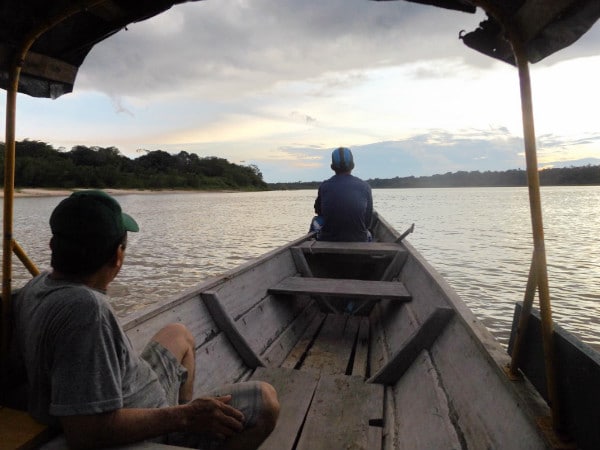 I have always wanted to visit the Amazon River since I was a child watching nature programs on Channel 11 in the Chicago area. One item that escaped my attention when watching these programs was there were freshwater dolphins that lived in the Amazon River system. I thought they only lived in the oceans. I guess I was concentrating too much on the 20 foot anaconda or the sloths, anteaters, and monkeys. 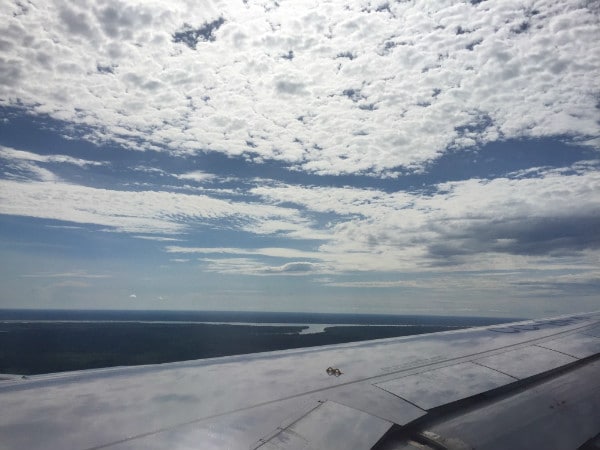 When I saw the Amazon River from our descending plane into Leticia, it was a tick off my bucket list

I came to Amazonas region of Colombia in search of the latter animals. When I found out there were Amazon River pink dolphins to see, that was just a bonus. The search for dolphins turned out to be my favorite part of the three day two night trek. 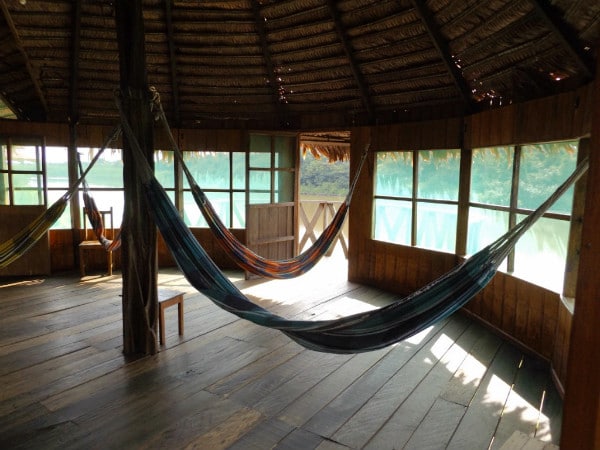 We arrived at the Zacumba Rainforest Lodge around 2 p.m. after a two hour boat ride up the Amazon and then the Yavari Rivers. We relaxed in the hammocks for a bit before going on a couple hour hike in the jungle. We then relaxed again in the hammocks until sunset. Antonio, the owner of Amazon Jungle Trips based of Leticia, Colombia informed us we would watch the sunset and search for pink dolphins.

Searching for Amazon River pink dolphins and gray ones too

We got in the boat and headed out into the main channel of the Yavari.  The lodge is located on either a backwater channel or another smaller tributary. The channel spills out into the main section of the Yavari just a couple of hundred feet upstream. This is a great place to spot the dolphins because many fish hang out at this intersection to feed, so the dolphins show up then to eat the fish. 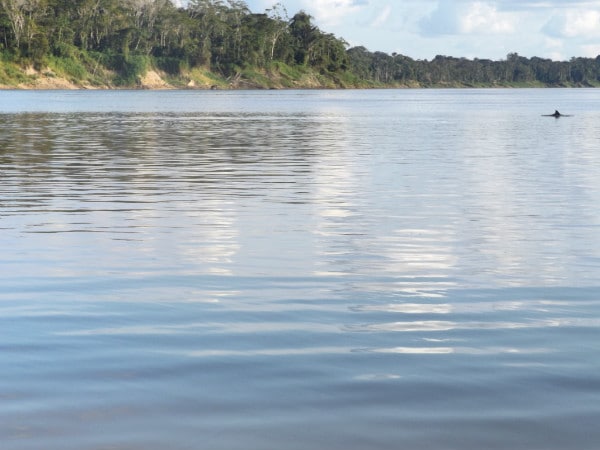 The gray and pink dolphins are actually the same species. They are part of the species known as the Amazon River dolphin. Generally, the gray dolphins are young or immature dolphins, and the pink ones are the adults.

Almost immediately a gray dolphin breached not too far ahead. We slowly headed up that direction in the boat and then cut the motor and drifted to where the dolphin last was seen. Meantime, in the west a beautiful sunset was taking place. I did not know where to place my eyes. Fortunately, we were looking west, but one eye wanted to scan the water for dolphins and the other wanted to see the sunset making me a little cross-eyed. 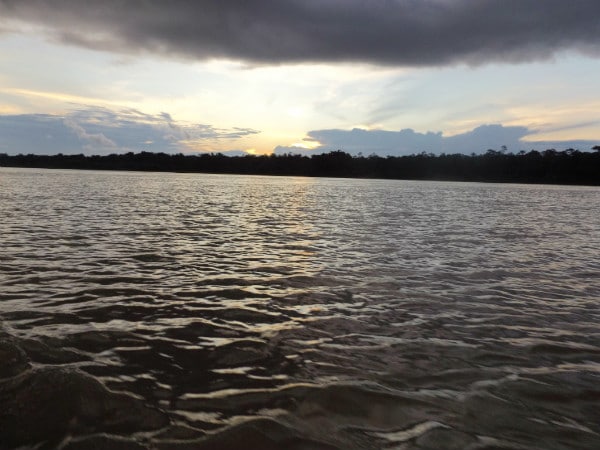 This turned out to be the routine. A dolphin would breach, then we would scoot closer and cut the engine. Our guide would then paddle closer while whistling to the dolphin. We were lucky to have a dolphin whisperer with us. We would always cut the engine in advance of where the dolphin breached, so we could get as close as possible while doing our best not to harass them. They did not seem to mind our presence. When a dolphin breached near us it was exhilarating and everyone in the boat let out a gasp at the same time. This happened the first time we saw the dolphins and the 15th time we saw them. It did not get old. 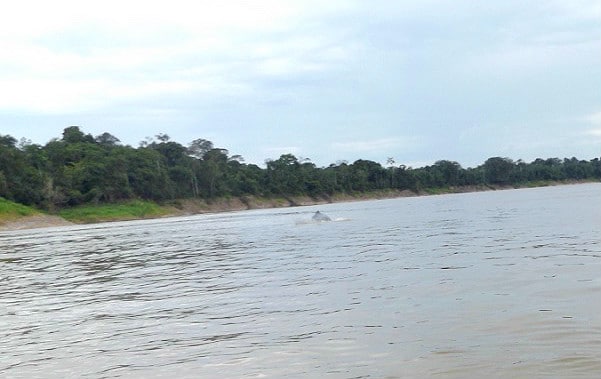 We did this same activity both nights that I stayed at the lodge. One morning we also awoke for a sunrise viewing. While on the boat, I was taking a picture of the sunrise, and our guide pointed to a pink dolphin. It was our first of the trip. In fact, I luckily got a picture of the pink dolphin as he emerged from the water at the same time I clicked the sunrise. I was photo bombed by an Amazonian pink dolphin. 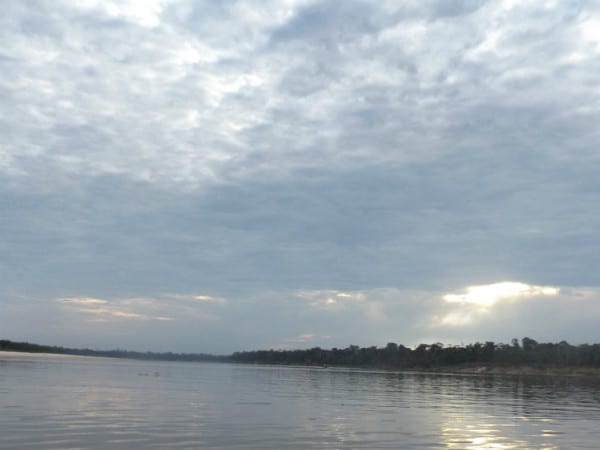 Taking pictures and video of the dolphins was a tough business. In the video above, I was actually able to get shots of three dolphins breaking the water on my GoPro camera. They would break the water and you could only hope to point the camera at the water to where you thought they might come out and click and hope for the best. You can see them in the video at the 55 second mark, 1:34 mark, and approximately the 1:54 mark. 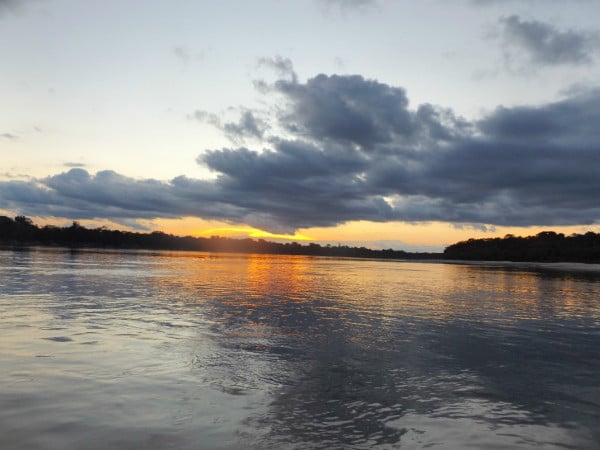 Sunset was even better the second night

There was only one time during our trip that a dolphin actually jumped completely out of the water. I thought that I captured it, but I just missed. All I got was a ring of water where he made his graceful re-entry into the river. I would give him a 10 on the dive. 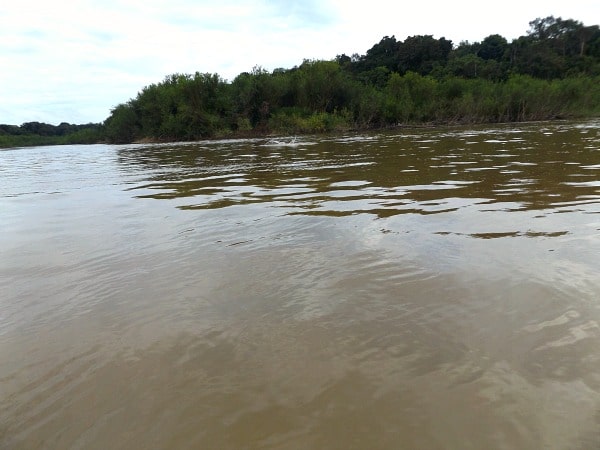 A perfect splash on the Yavari River

On the second night of sunsets and dolphin watching, we stopped at a beach to swim. I swam out far away from the shore and the boats and followed our guide who was doing the same. There were dolphins about 100 meters away breaking the surface. I could see them perfectly since I was at their level. I hoped they would come closer, but they kept their distance. I also wished I had my GoPro, but I had it set up doing a time lapse video of the sunset. 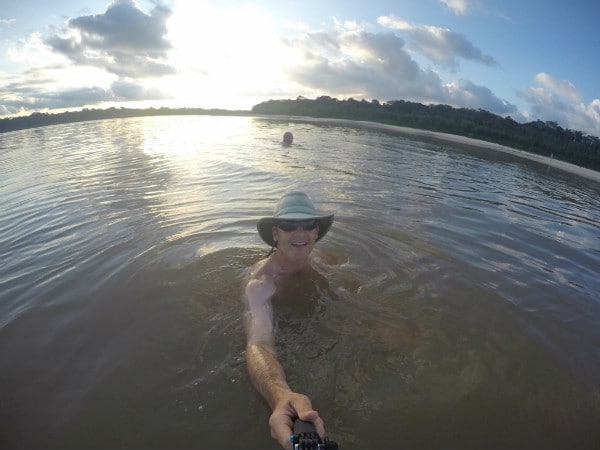 Swimming in the Yavari River, but no dolphins around here

It was eventually time to head back to civilization where there are no jumping dolphins in rivers that have forever been on my bucket list. Our motor boat that took us back to Leticia soon arrived at the Yavari, Amazon confluence. We turned on to the Amazon and headed back to where we started. I kept seeing dolphins all the way up until we made it to Leticia as if they were escorting our boat to safety, saying goodbye, and wishing for me to come again.

Although I only have pictures of fins and splashes to remind me of my time searching for dolphins along the Amazon River Basin in Colombia, Peru, and Brazil, I will never forget the experience. It was such an incredible experience being out on the water feeling the cool breeze after a hot humid day while the sun and clouds are creating a beautiful painting in the west, and freshwater dolphins are breaking the surface of a South American River.