Every year the Ralph Frese Memorial Paddle along the Chicago River is the beginning of the canoe season. It usually takes place on New Year’s Day, but due to cold conditions it was canceled this year. It was rescheduled for March 21.

In Chicago late March can be unpredictable, but we lucked out with one of the prettiest and warmest days of the year to this point. It was upper 40s and sunny with little wind. The event was organized by the Forest Preserves of Cook County. I took part as a volunteer guide with the Friends of the Chicago River. Our mission was to just paddle the river and offer assistance if anyone had any safety issues. 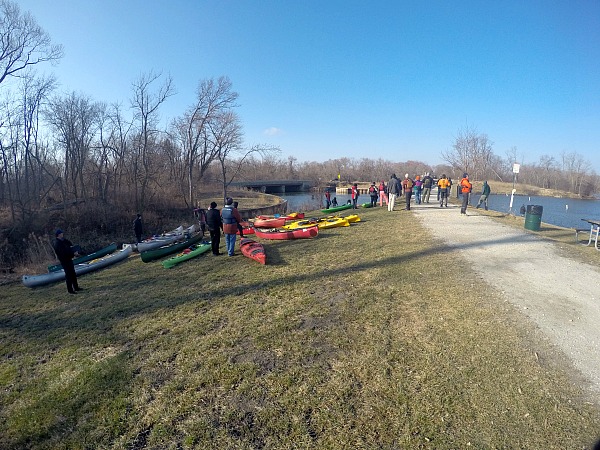 The Ralph Frese Memorial Paddle naturally started out with a note honoring the man. Ralph Frese was an icon to the canoe community in the Chicago area. He owned the Chicago Canoe Base store, but he did so much for the cause of canoeing and the outdoors. He promoted the sport, he built canoes, and he lobbied for more places to enjoy the sport and worked to protect the environment. Read his Wikipedia page for more information. 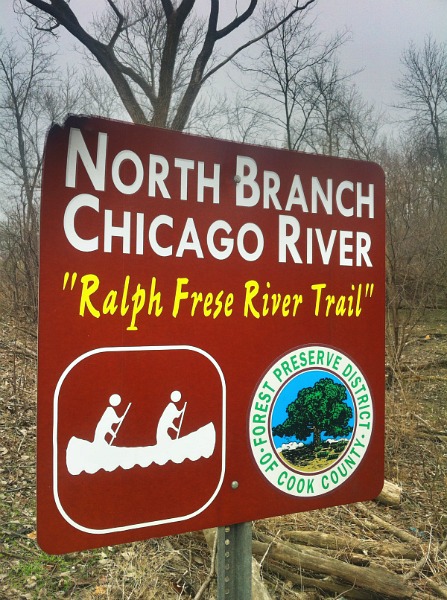 We were actually paddling down a river that the Forest Preserves District of Cook County designated as the Ralph Frese River Trail. We parked at Linne Woods in Morton Grove where a shuttle was provided that took us to the beginning of the paddle. The put in was where the North Branch of the Chicago River begins just south of Skokie Lagoons. 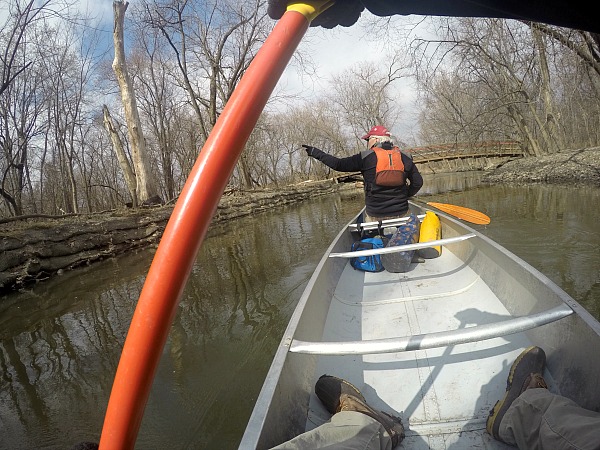 We put in and paddled south towards our cars at Morton Grove. I was really surprised how nice the river was. I could not believe I was only a half hour away from downtown and right in the middle of suburban Chicagoland. The river ran through forested lands on both sides of the river. Besides Linne Woods, we also paddled through Watersmeet Woods and Harms Woods. Pretty much the whole trip was like this except for one short stretch where we went through a golf course. One look at the bottom of the river and you could tell this section of the river was a golfball graveyard. Be careful if someone yells FORE! 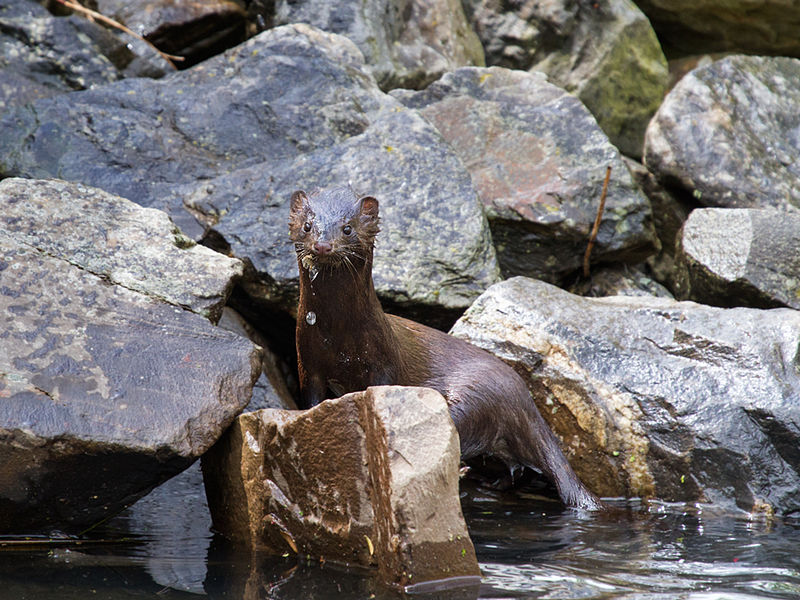 A movement along the river indicated a mammal of some sort. I turned my head to see something larger than a squirrel. For a moment I thought it was a river otter. It turned out to be a mink. It was a healthy large specimen for a mink. I could not believe I was seeing a mink so close to Chicago. These animals are usually more associated with wild areas. A quarter of a mile later, another mink ran along the other shore, and it was also a fairly large sized animal. I don’t think I have seen a mink for several years, and in one mile of river we saw two. You cannot beat a two mink day.

Seeing a mink reminded me of a time in the Boundary Waters that we saw a mother mink at a portage with 11 baby mink following behind her along the rocky shoreline. A person in our group threw the mother a piece of his peanut butter and jelly sandwich and the mink hissed at him and charged him. It was a hilarious sight. That will teach him not to feed the animals. 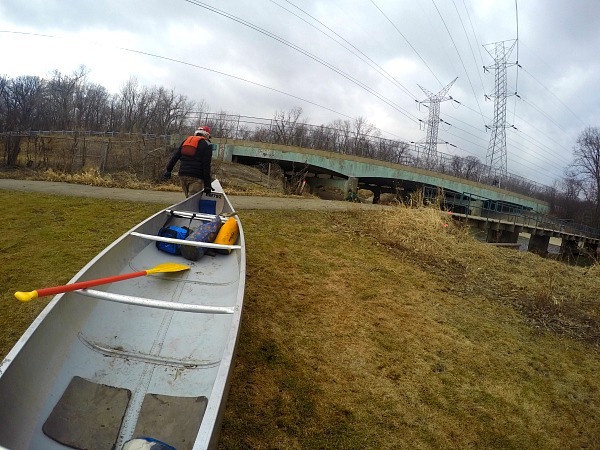 Speaking of portages – we had two on this trip over rock dams. The Forest Preserve had volunteers manning these sections. They helped us out of the boat and back into it. It would be nice to have a crew like this at a portage in the Boundary Waters or Quetico. I was getting spoiled with all this help. There were also police officers at every bridge with throw ropes in case anyone needed a rescue. The Forest Preserve did a great job organizing.

Anyone who is thinking of doing this trip in the future should be comforted in the fact that the organizers put a lot of emphasis into safety. The paddle is for experienced paddlers only though as the Chicago River winds back and forth, so competent steering is a must especially if the water is high and current flowing at a good rate. Today it was somewhat low and quite manageable around the turns.

We then paddled along a running/biking trail and saw a few people out enjoying the early spring day. We also saw two white-tailed deer run off into the woods. Two mink and now two deer, so the wildlife tally was impressive for an urban river. 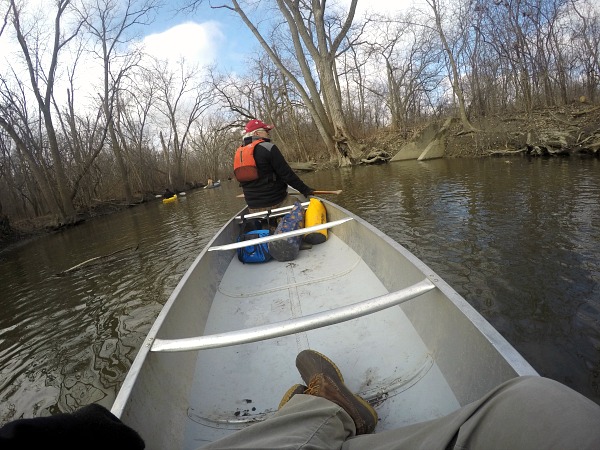 Eventually, we came around the corner and the take-out was in sight. There were volunteers there as well including some high school kids who helped us out of the boat. When we carried our canoe out to the grove where the cars were parked, we were greeted to snacks, a warm fire, and hot apple cider. It was a great way to end the trip. 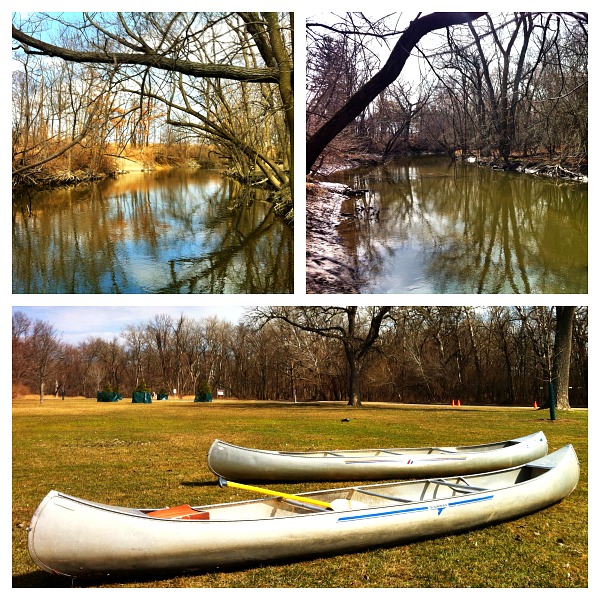 I might have to try this trip next year on New Year’s Day. It would be quite an experience to canoe through the woods with snow on the ground. On an unfortunate note, I left my regular camera at home and my iPhone in the car, so the only photo device I had was my GoPro. I guess I was a little rusty in my blogging skills being the first canoe trip of the year. This was my first North Branch of the Chicago River adventure, and I look forward to return again soon.