A Chicago Marathon morning and take off 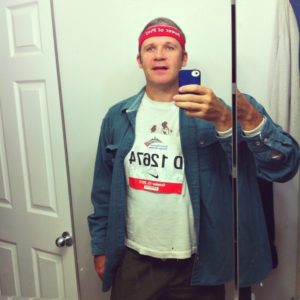 After months of training and over 700 mile spent running and hitting the pavement, it was time to run the Chicago Marathon. I woke at 4:30 a.m. and had some toast and jelly, kind snack bar, and some gatorade. Then I caught the brown line in.

I live on the end of the Brown line at Francisco, and I was the only runner on the train. That changed rather quickly as with each stop the train began to swell with runners in sweat pants, running shoes, and their marathon issued clear plastic bag (given for security reasons). 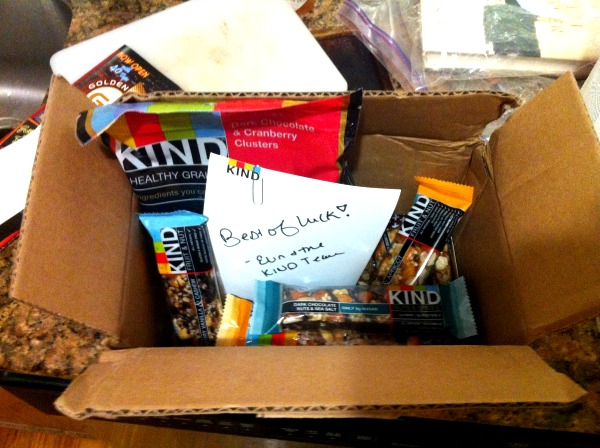 Falling back in love with Chicago after running the marathon

Chicago Marathon training is over

I listened to my iPhone and tried to psyche myself up on the ride in or at least wake up. This was not your normal Sunday. No nursing a hangover and watching football today as I was running 26.2 miles. Or at least I hoped I would finish. 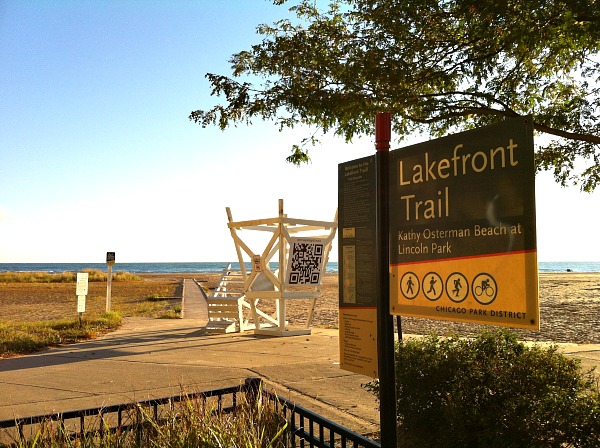 My 20 mile run took place along the Chicago Lakefront

I had my doubts. I feel my training was productive, and I felt in good shape, but I had a little trouble with my longer runs. I finished my 20 mile run three weeks before, and I felt I could not run another foot. I hoped the electricity of the crowd and other runners would carry me that last 6.2 miles. 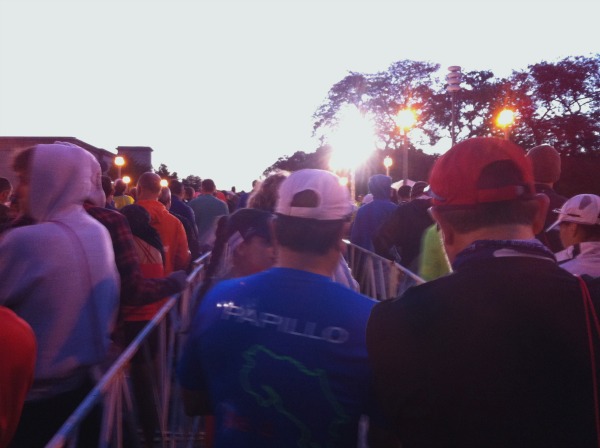 Security was tight but efficient

The crowds were backed up at the entrance, but despite the security, I rolled through the entrance to Grant Park rather effortlessly. As long as you had your bib on and gear in your plastic bag, you were good.

The only problem with the race was there was not enough bathrooms in Grant Park. With 40,000 runners all wanting to start the race with an empty bowel and bladder, this comes as no surprise.  I went to the bathroom as soon as I got there although I had to wait in line for about ten minutes.

Other than the bathroom issue, the rest of the race from beginning to end was amazingly smooth and well run. I grabbed some Gatorade and lubed up my legs a little so to avoid chaffing.  Vaseline and gatorade were provided for free to all runners as was gear check in. 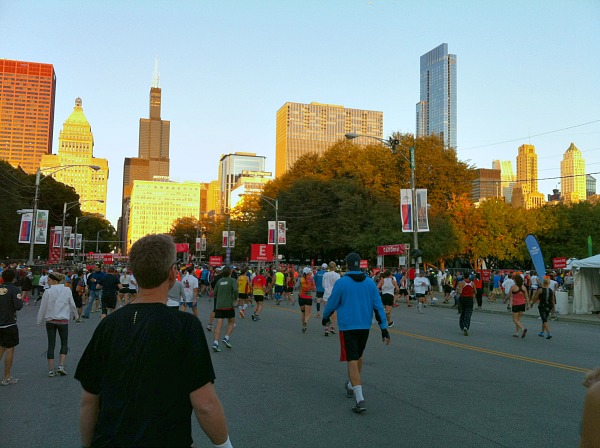 I then turned in my bag at the gear check. A piece of the bib tore off with your bib number, and they gave you a plastic tie to fix it to your bag, so you could turn in your gear and pick it up after the race. They also had changing stations. I wish I would have brought a complete change of clothes to change into after the race. 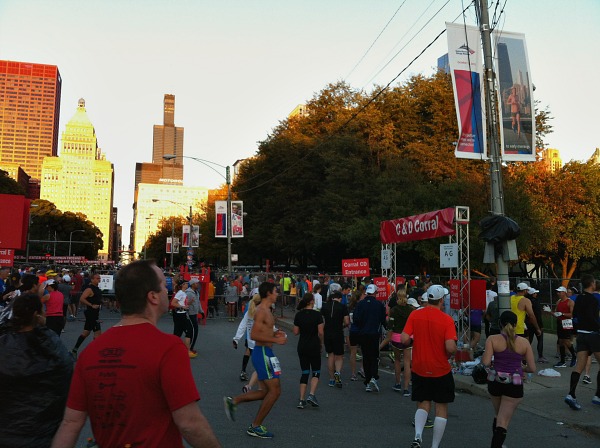 Getting corralled at the Chicago Marathon

We then had to find our corral. I was in corral D. I entered the corral a little after 7 a.m. as we had to be in the corral by 7:20 a.m. I was smashed in together with thousands of other runners. We were halted just short of the straightaway as we could go no further. I kind of had to go to the bathroom again, but the lines were too long, and I did not have time. 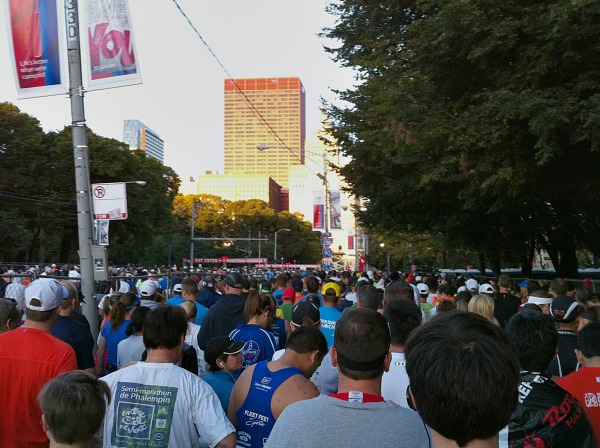 The sheep head to the start

Hardly anyone said a word. I was feeling very emotional for some reason. I was almost in tears as the DJ played Born to Run by Bruce Springsteen. He also rattled off some stats like how many runners had signed up, noted that there were runners from every state, and Mexico had the highest number of foreign runners. Despite the moment, I was quite calm. 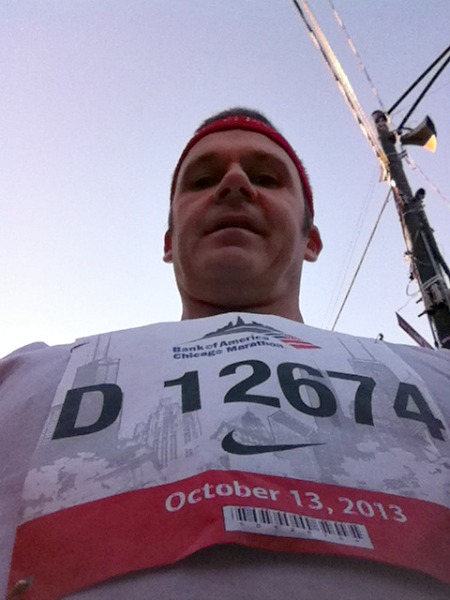 Another selfie as I await the start

The DJ counted down the time to the start. Ten minutes to start. . .  Five minutes to start . . . Then he introduced the elite field and at 7:20 they took off. Minutes later it was the rest of the field. I was about a half mile from the start. The timing device on the bib does not activate until the starting line is crossed. 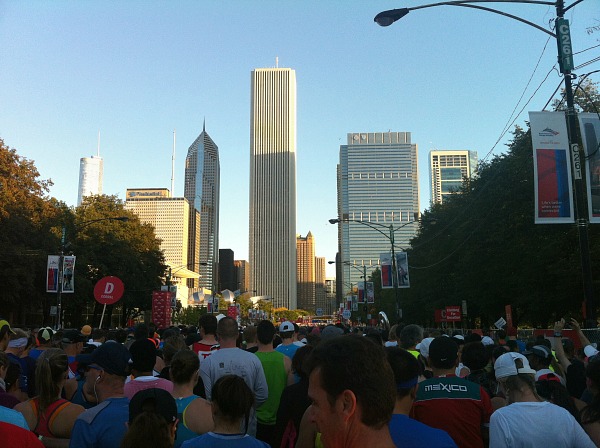 We turn the corner and the start comes into view

In slow motion we moved toward the starting line. We were smashed like sardines, but we began to decompress as we neared the start. In the distance I could already see a mass of runners in motion on the other side of the starting line. I had my iPhone and took several photos of what lay ahead. 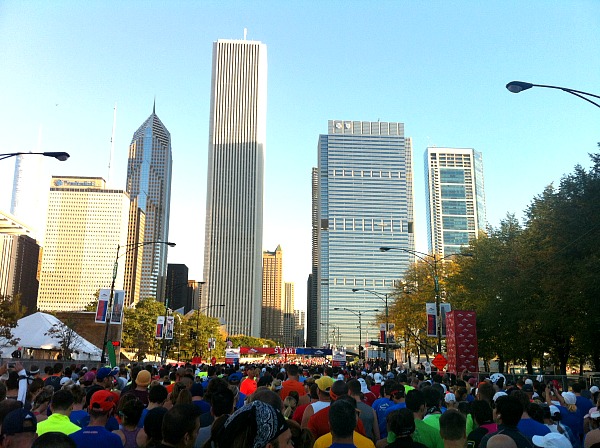 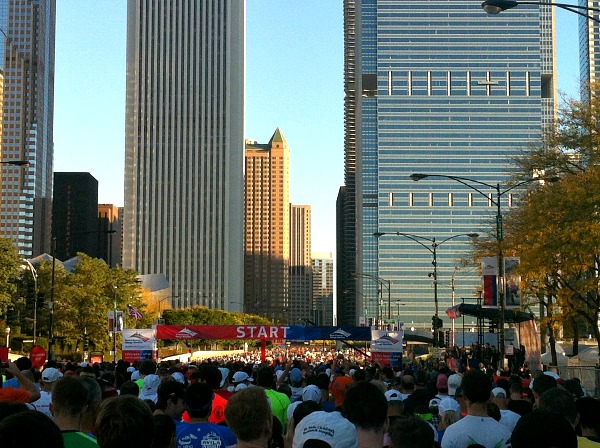 Just a few more feet and we are off

Then it was my turn to pass under the starting line, and I was off.