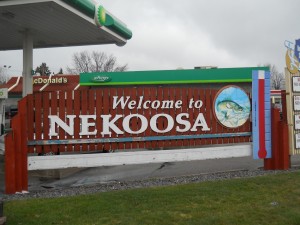 The annual Walleye Days fishing week in Nekoosa, Wisconsin ended a with snow storm and cold temperatures. Those that did brave the frigid temperatures faced long periods with little action except from tugs from their flask or swigs from their beer.

We talked to the employee at Sunrise bait shop in Nekoosa, and he said that the only fish caught were too big to keep and those were few and far between. Those words were prescient as the only two walleyes we caught over the whole weekend were over 20 inches. You can only keep fish between 15-20 inches, which is a good rule as the 20 inch variety are usually females full of eggs.

I arrived on the shores of Lake Arrowhead to low morale. The four fellow fisherman had all been skunked on Friday. The only thing keeping spirits up was the copious amounts of spirits imbibed. Although they did not score on the fishing field, they succeeded in having a good time anyway at the local watering hole after the fish won the daily battle. 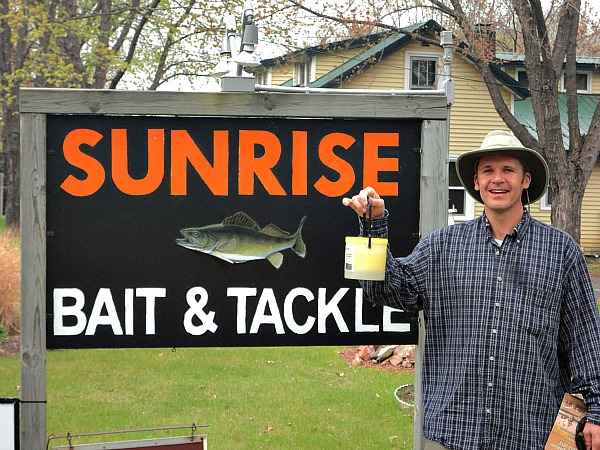 Getting our minnow fix at Sunrise bait shop last year

I was not fazed by the lack of success. I had hope that the next day would be the day the walleyes would begin to bite. The walleyes swim up to the dam in Nekoosa and spawn, so there are a ton of fish concentrated in one spot. The warmth of the river water triggers them to be more active and this year that had not yet happened as it has been a cold spring in central Wisconsin. 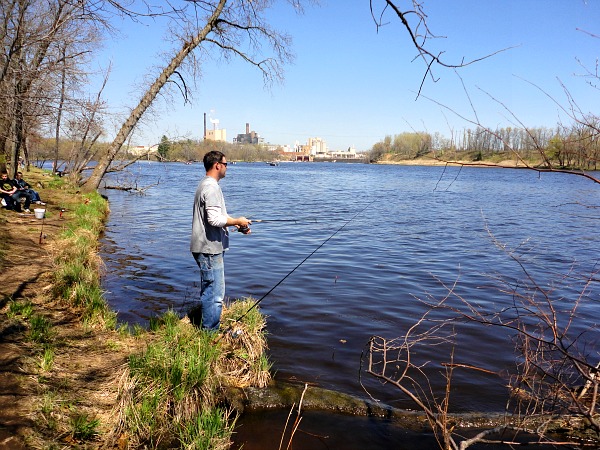 Warm days like this from last year help trigger the walleye run, but it has not happened yet

According to the United States Geological Survey’s water resource page, the Wisconsin River water gauge closest to Nekoosa at the Wisconsin Dells indicates that the water has not been warmer than 41 degrees since April 1, and it currently is at an icy 34 degrees. I am not sure what the optimal temperature is for catching fish, but in contrast, last year’s average was in the lower to mid 50s.

I arrived at the river bank and found what looked like a suitable spot. Two years ago a veteran of the fishing days gave me some advice after a long day with no fish. He said to work the quiet water for the big walleyes. He told me they like to swim in the eddies and rest in order to get out of the strong current. The spot I chose had sufficient quiet water. 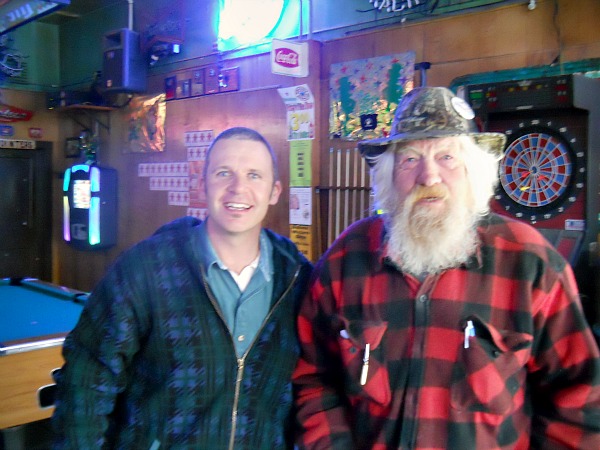 Getting some advice from a veteran of Walleye Days and fishing

On my first cast I lost my minnow. I was using a ¼ oz Mr. Twister jig head with a live minnow. It was an inauspicious start. Fortunately, my luck would change dramatically. On my fifth cast just as I was about to take the jig out of the water, BANG!. 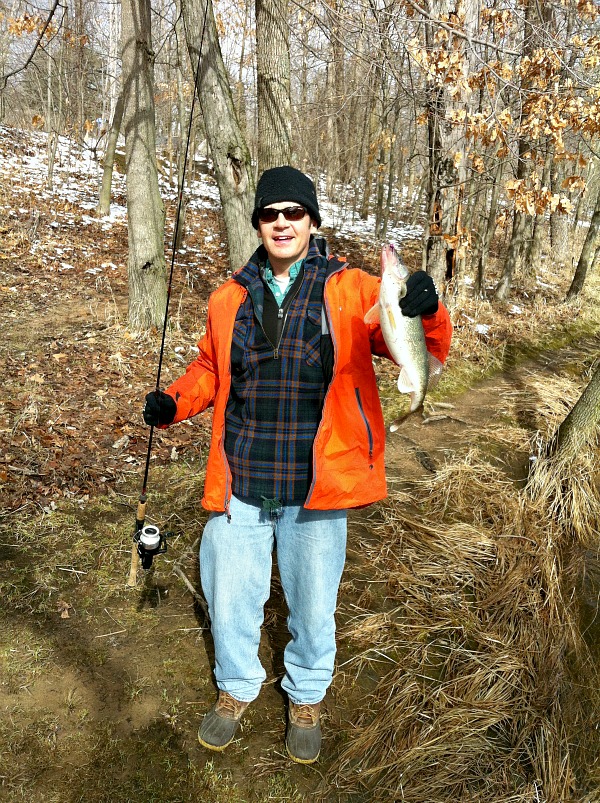 Success with a nice walleye

At first I thought I was stuck on the edge of the bank, but then my poled started to wiggle, and I knew a fish was on. My friends grabbed the net, and I pulled in a 20 inch plus walleye. It was just over the limit, so it had to be released back into the river, but I was happy to be off the walleye snide. This was the first time I ever said “darn, the fish is too big.” It is rare to be penalized for a fish too big, but it was a female full of eggs, so returning it to the river was the right thing to do. 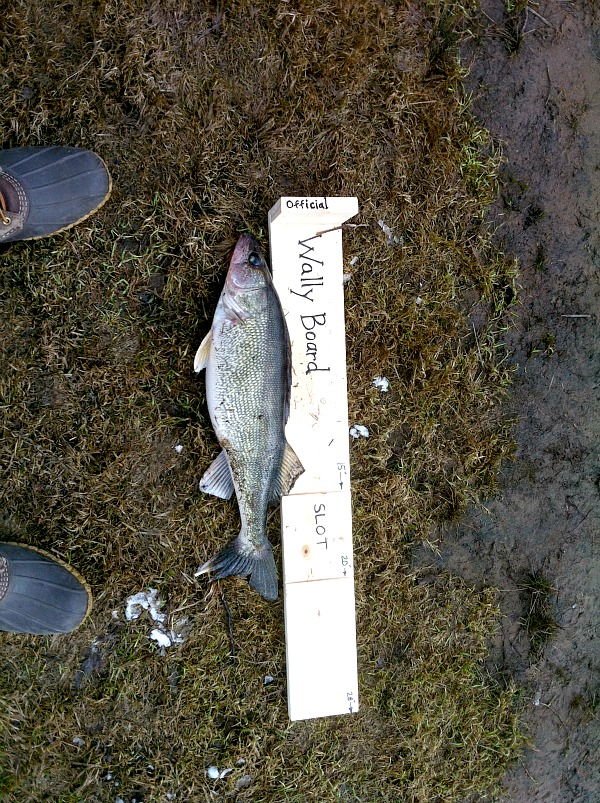 According to the walleye board, the fish is barely too big to be a keeper 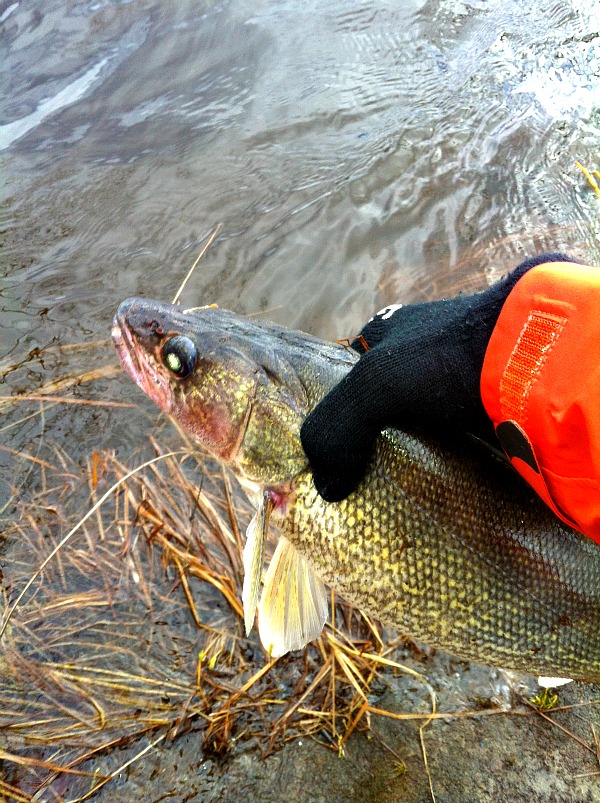 I did not catch any fish two years ago, and I only caught striped bass last year, so I was ecstatic. Plus, I learned later I won $30 as everyone anted in $5.00 in a pot to go to the fisherman with the first fish. I win. 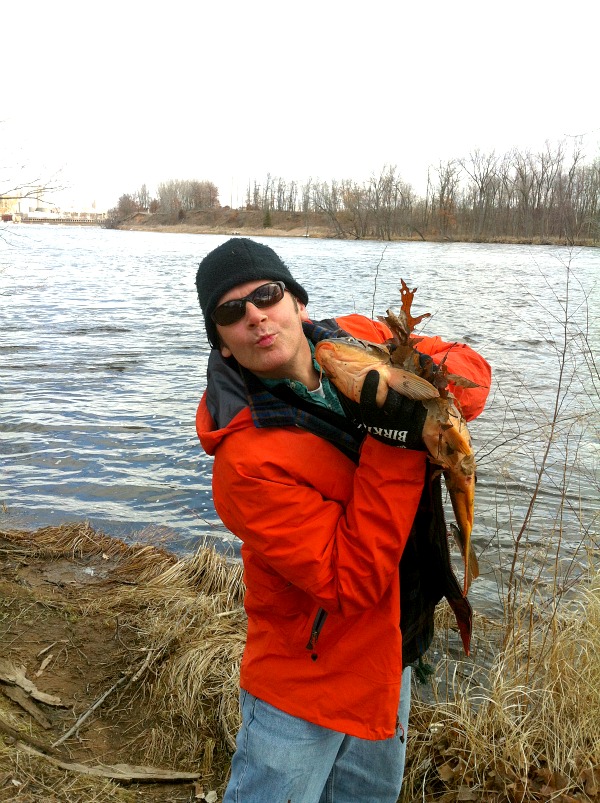 So many carp haters out there, so I am giving a little love to the one I caught

I then set about to catch more. I soon had another whopper, but it turned out to be an enormous carp. It was a fun fight, but walleye fishermen shun the bottom feeding carp.

My friend Jim scored an even bigger walleye a couple of hours later and another fisherman, Frank caught a nice northern. That was it folks for the fish. 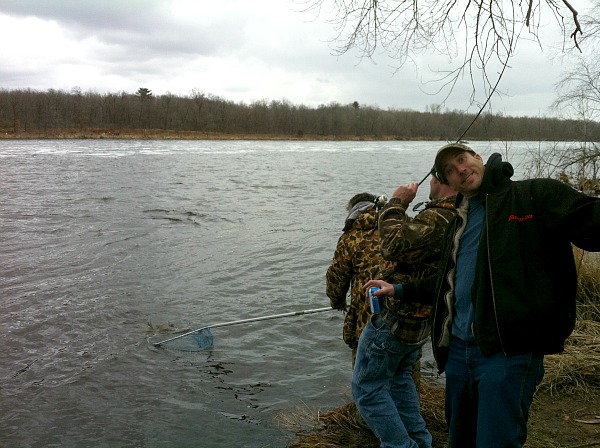 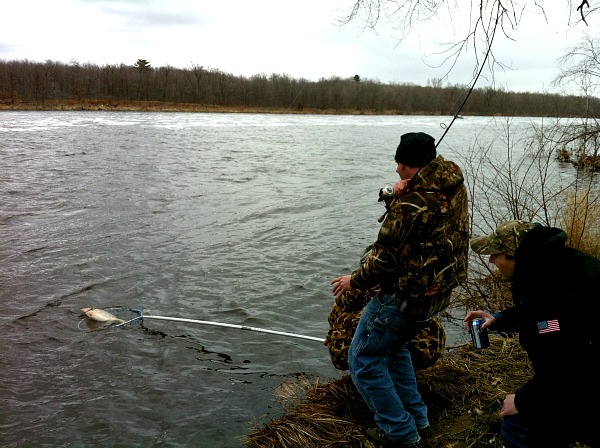 Jim providing one of the few exciting moments of the afternoon 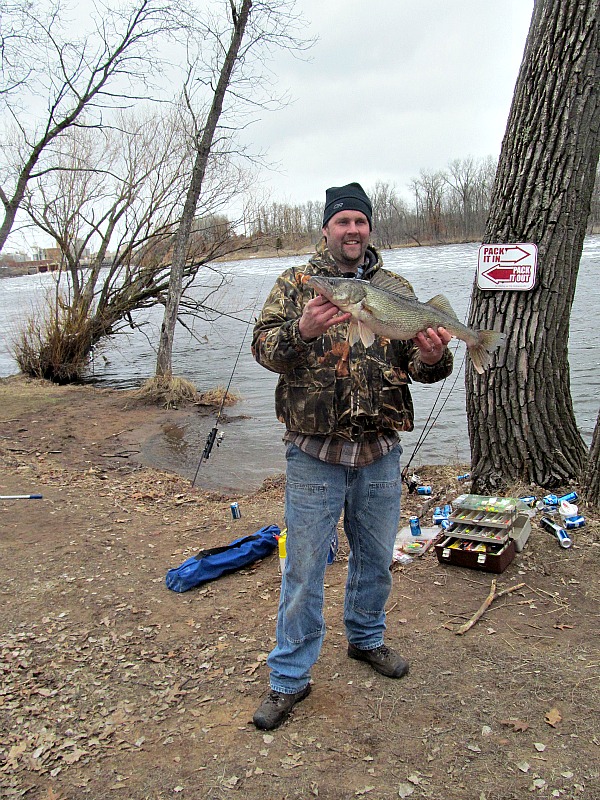 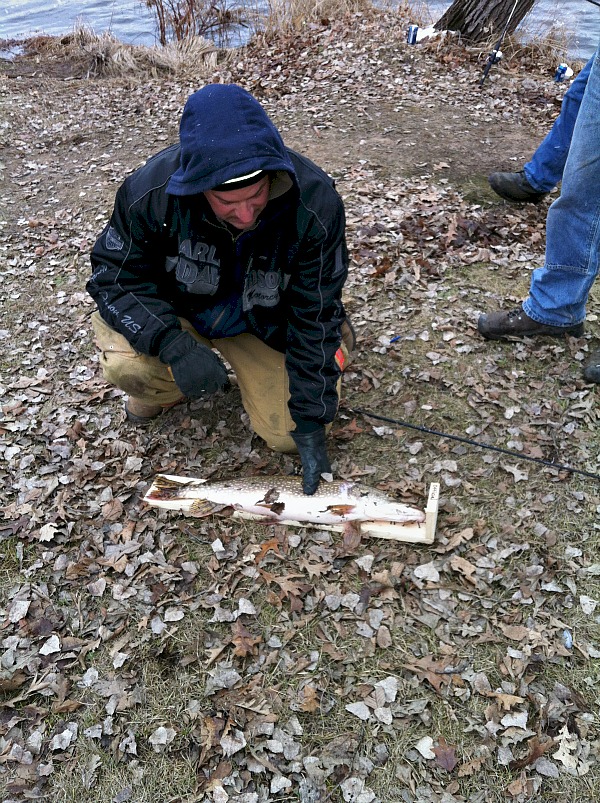 Frank checking out how the northern fared on the scale

I caught one walleye on one of my first casts and that was it. I admit I got a little distracted by the beers, the cold temperatures, and a short nap on the banks of the Wisconsin, but I did put in a lot of effort for only one walleye, but at least I was not shut out again. 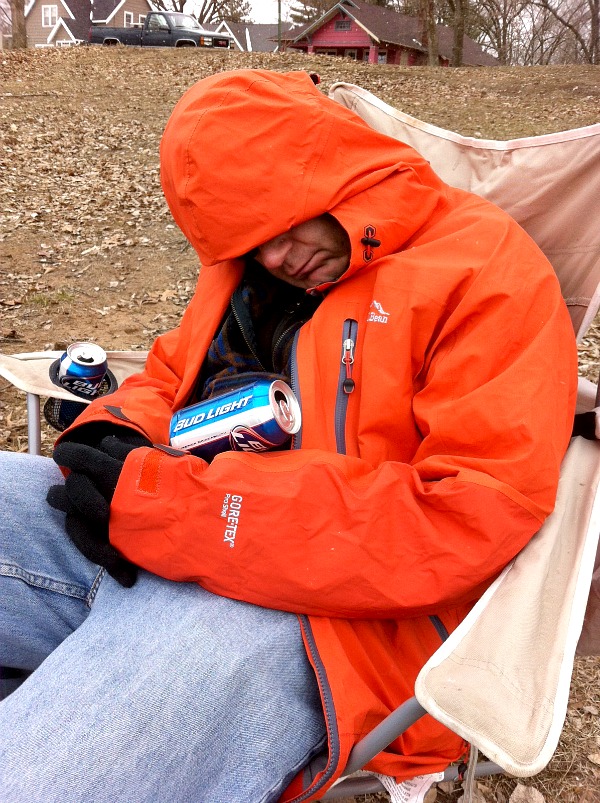 I know it seems this author is constantly on the go, but sometimes you need a little nap

We then hit the local pub and had half pound burgers, Point beers, and pool. After several hours warming up in the bar, we did things that grown men do when out of town on a fishing trip, but for that part of the story, what happens at Walleye Days stays in Nekoosa. 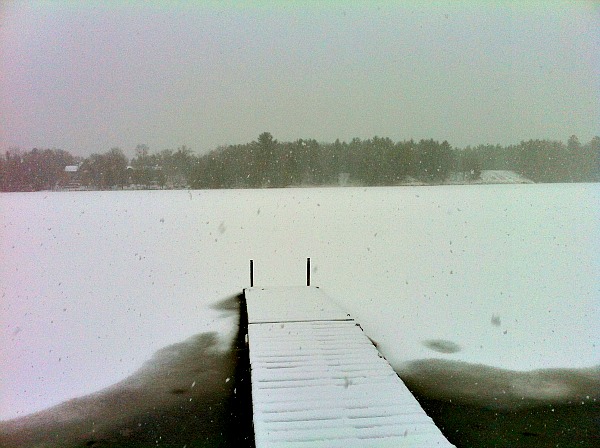 Next morning we awoke to a winter wonderland. I should have brought my skis as the Sunday storm derailed hopes of getting a few more casts in before heading home.