On the drive into the Iwokrama Rainforest in Guyana, my guides mentioned they had seen an anaconda a couple of days ago by the river at a bridge crossing. I asked them how big the snake was. When they told me I gasped, it was much bigger than mine. 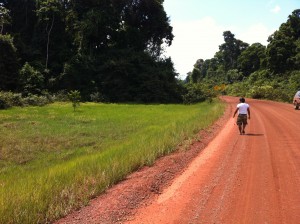 My guide searching for anacondas

There is the old cliché that it is not the size of the ship, but the motion of the ocean, but I was landlocked in a Guyana Rainforest, and I wanted an enormous serpent. I had anaconda envy in a big way. 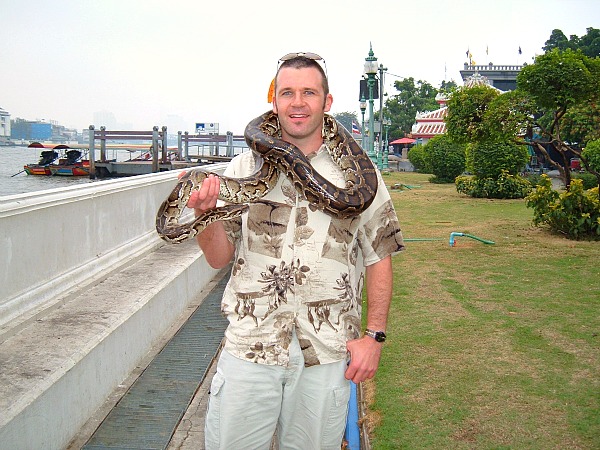 I used to have a big snake. So big I could wrap it around my neck, but lately my snakes have been small and limp. In fact, my most recent snake was so ashamed of itself it wrapped into a ball and hide. It knew it was no match for the units found in this South America jungle. 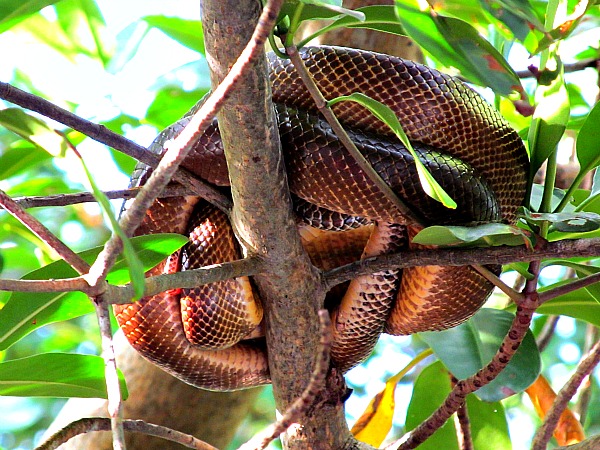 A balled up Cook’s tree boa found in Trinidad & Tobago 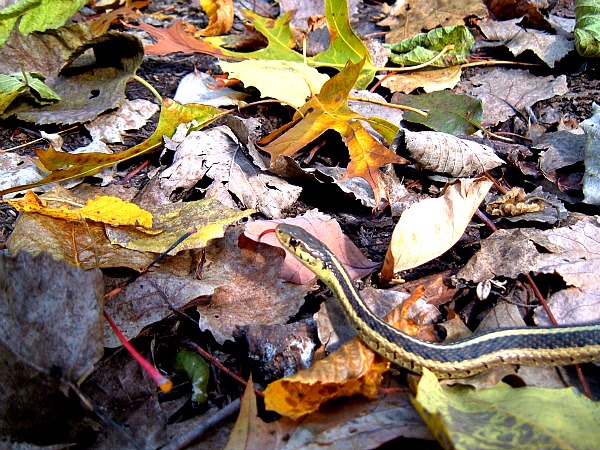 When we stopped at the bridge on the way in we did not see the leviathan. Instead, we only saw a kingfisher. I would have settled for a wood pecker. 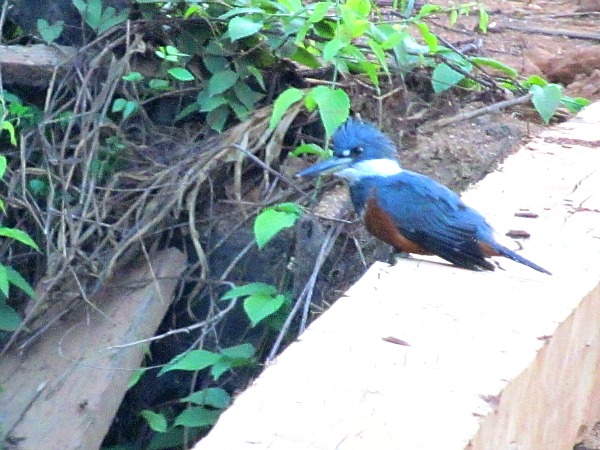 Only a kingfisher found on the way in

After a walk in the rainforest, we returned to the jeep for a return home. The tour was almost over. Hoping to extenze (pun intended) the trip, we stopped again at the bridge looking for the giant beast. I timidly walked behind my guide in the lush grass by the river.

Hope for an anaconda by the river

We were actually on Guyana’s superhighway. The Georgtown-Lethem Road is the only highway into the interior of country. During the 30 minutes we walked around the green grass looking for snakes, one car passed us by. 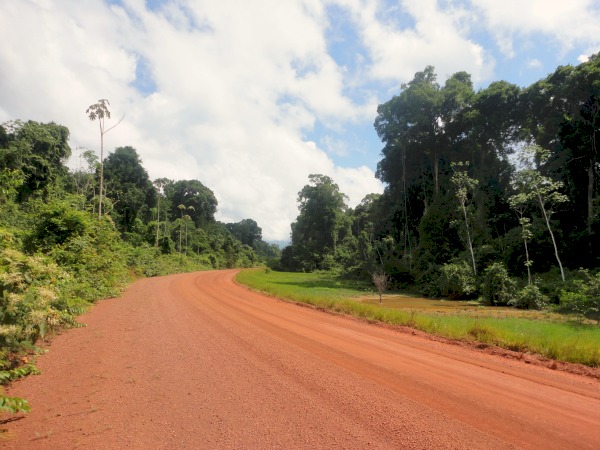 Georgetown-Lethem Road through the Iwokrama Rainforest 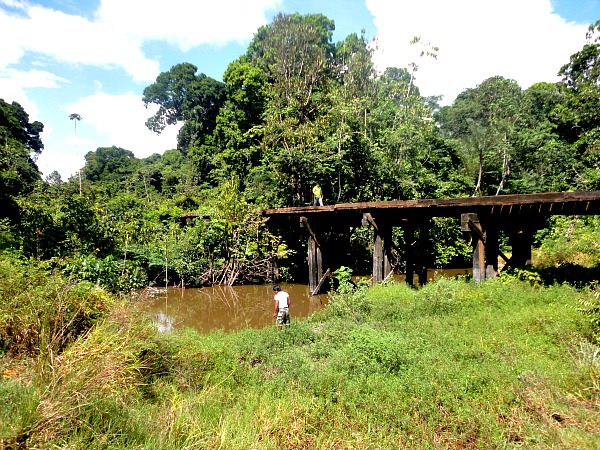 The only sign that a long hard creature had been here was the imprint from the slithering mass in the weeds. Looking at the crushed grass where the snake had moved just a couple of days ago was an adventure in of itself.

It was stifling hot in the midday sun with no shade. The river looked inviting for a quick dip, but knowing one of the largest reptiles in the world was afoot put those notions aside. My guide mentioned the river also was home to five foot electric eels and piranhas. I think I will wait for a swimming pool. 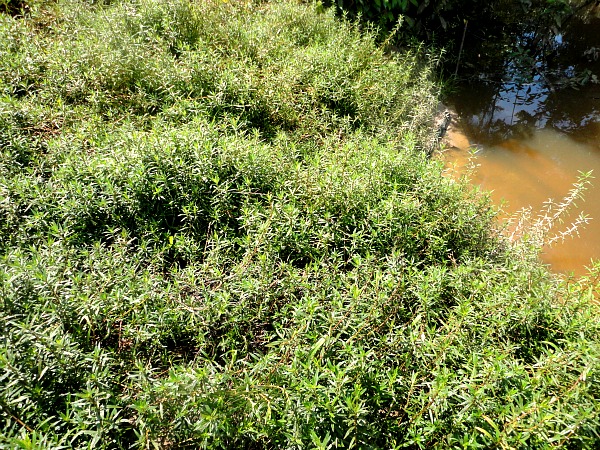 The crushed grass is where the anaconda slithered into the grass

No luck but still a cool experience

In the end, we did not see an anaconda, but it is not every day you get to walk in their path or even look for them period.  The anaconda we were looking for was 12 feet long, which is half the size of the longest one as they have been known to reach 29 feet long and 550 pounds. That is a lot of snake. 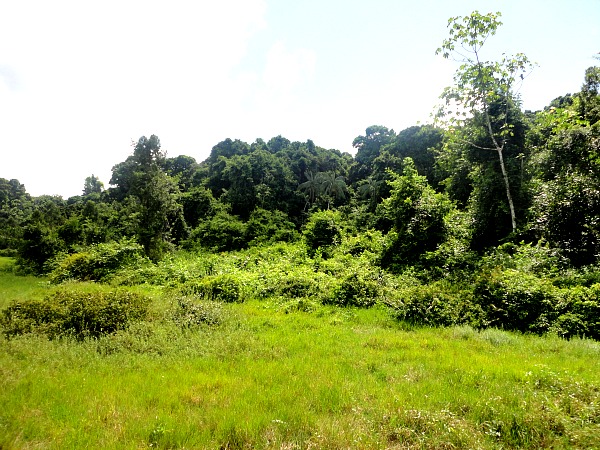 The anaconda likes this grassy environment near rivers 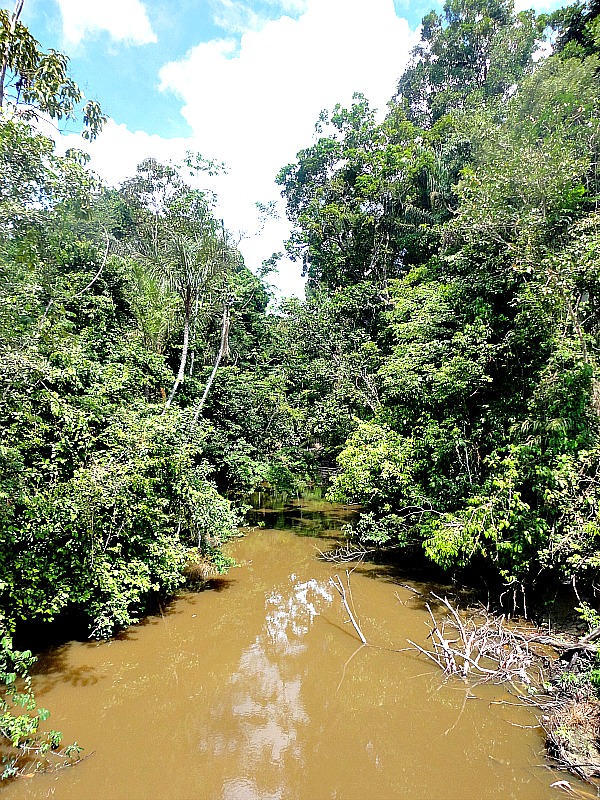 The derivation of the word is unknown. Two theories prevail. One is that it means “whip snake” coming from Latinization of Sinhalese henacandaya. Another is it means “elephant killer” coming from the Tamil word anaikkonda, which would be strange since there are no elephants in South America.

The actual name of the anaconda is the green anaconda, and it lives in the Amazon and Orinoco Basin, which includes Guyana. Besides the green, there are three other types of anacondas that are all smaller: the yellow, the Bolivian, and the dark spotted.  They all call South America home. The reticulated python can grow longer, but the anaconda is by girth the biggest snake in the world. It is fitting that the name is green as I was green with envy for those lucky enough to see a snake bigger than mine.

More from my Guyana adventure:

A man a benab and a hammock