Caroni Swamp home to the scarlet ibis: the national bird of Trinidad

We learned from our tour of the Asa Wright Nature Center and the Caroni Swamp that the national bird of Trinidad is the scarlet ibis. The national bird of Tobago is the cocorico. Together, they ordain the Trinidad & Tobago coat of arms. They both also appear prominently on their currency. 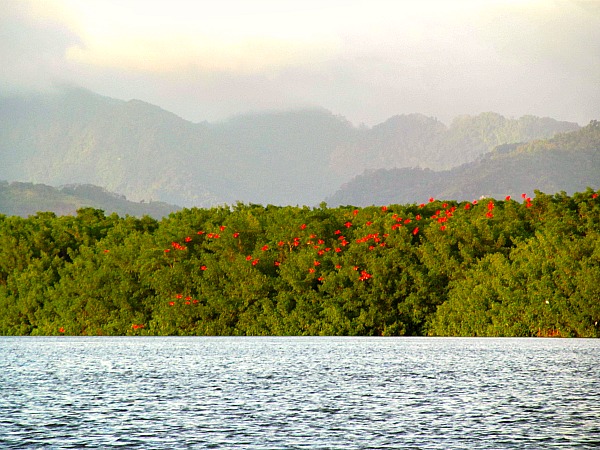 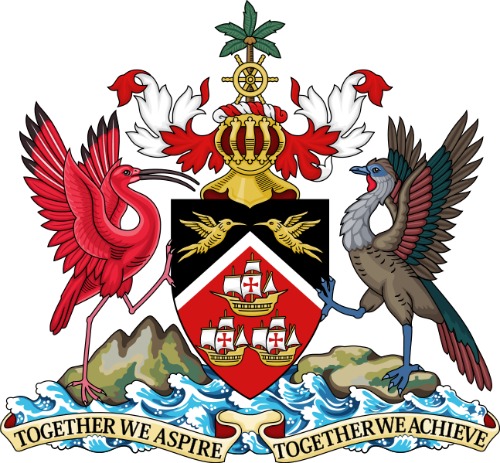 Scarlet ibis to the left and the cocorico to the right

Caroni Swamp is the place to see scarlet ibis in Trinidad

In the Caroni Swamp, we would see them in spades, well, perhaps diamonds as it more represents their beautiful bright red color. Ask anyone in the world what a flamingo looks like and they can tell you thanks to their pink beauty and their prominence in zoos and as lawn displays. 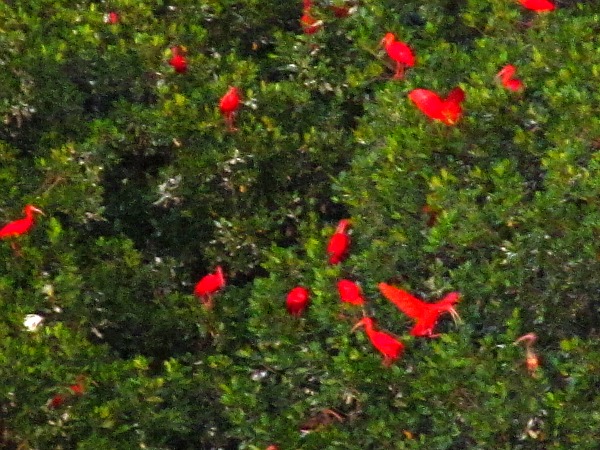 Closer up view of scarlet ibis island in Trinidad & Tobago

After seeing hordes of scarlet ibises, it made me wonder why these birds are not so well known. I think I would rather have a scarlet ibis on my lawn instead of a pink flamingo, yet the world knows very little about this colorful bird.

This is not so in Trinidad as they are passionately revered. We had seen a few of this amazing birds back in the mangroves of the Caroni Swamp, but we would soon get our fill when we made open water outside the channels. 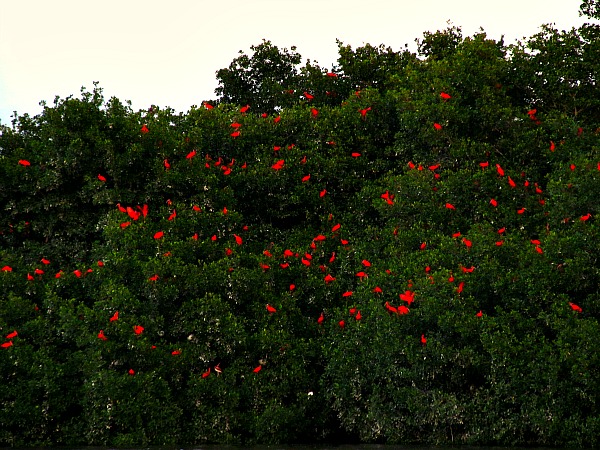 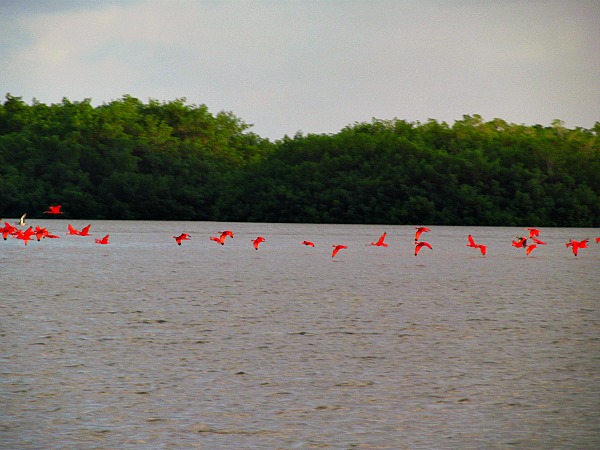 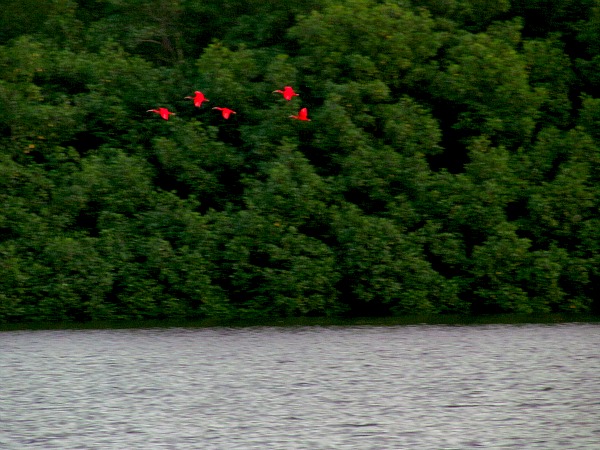 While sitting in the boat taking one photo after another of the returning birds to the island, we were fortunate enough to see another colorful natural wonder. A rainbow broke out over the swamp momentarily deflecting the cameras from birds to sky. Rainbows happen anywhere and at anytime, and soon the cameras refocused on the island scene filled with bright red birds intermixed with some egrets and tricolored herons. 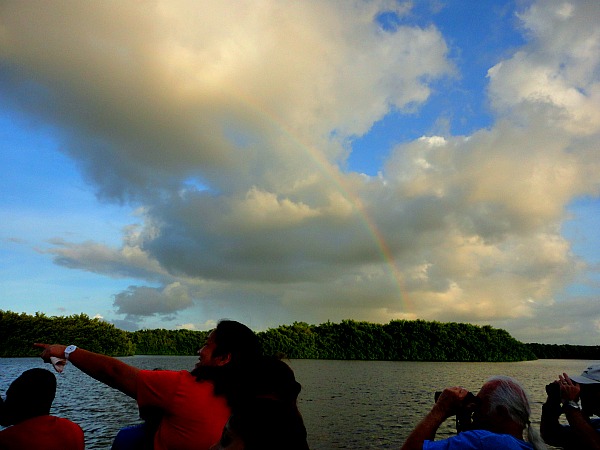 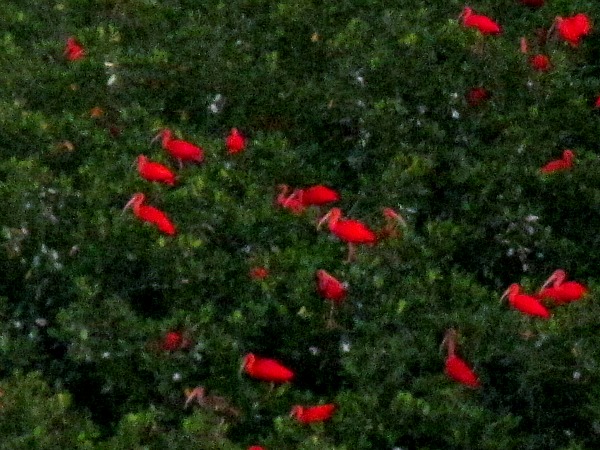 I could have stayed here all day zooming in on the island.  I wish we could have gotten closer, but I realize the need to give them their space. Soon, the sun started to descend, which ended the tour and photos. 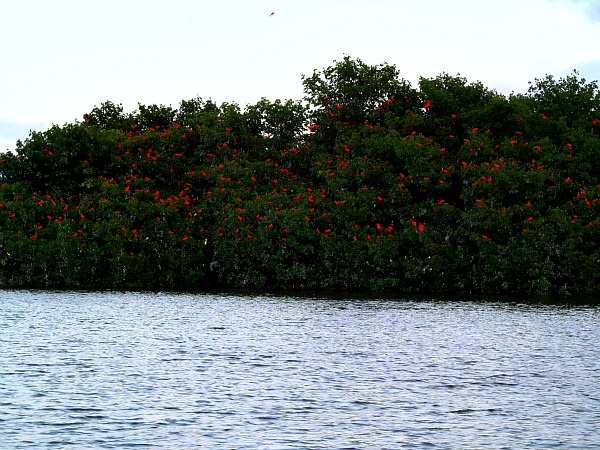 A perspective of the whole island filled with scarlet ibis 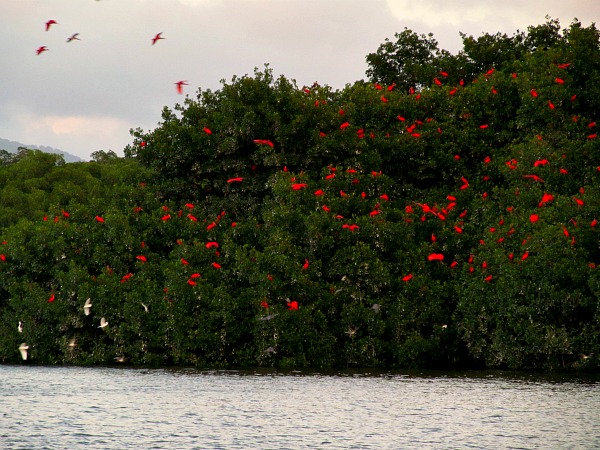 One busy island of scarlet ibises in the Caroni Swamp

The birds seen through the channels was amazing enough, but the beautiful scarlet ibis seen in such numbers was a thrilling conclusion to an amazing day in Trinidad & Tobago.

Caroni Swamp is a protect area in Trinidad & Tobago and can only be entered via permit. It is my understanding that in order to get a permit entrance must be with a guide. You can either do a group tour or you can kayak Caroni Swamp with a personal guide. The tour I took was combined with Asa Wright. It was an awesome day tour and only cost $80.00 per person with Jesse James. I highly recommend this tour operator and this tour. For more adventurous kayak tours, check out this outfit.