Things happen in threes as proven at Khao Yai, Thailand 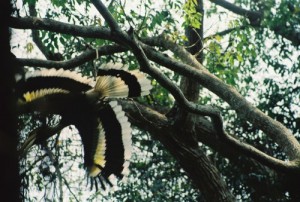 Flying hornbills was one of the the highlights

It had been a somewhat boring day in Khao Yai National Park in Thailand. I was enjoying the beautiful scenery and the opportunity to adventure travel in a national park half a world a way from where I lived, however, we had been walking in the jungle for hours and I only had a broken sweat to show for it. We had seen hardly any birds or animals.

The majestic hornbill poses for me at Khao Yai National Park

The day before had been a completely different story. We had seen hornbills, hummingbirds, kingfishers, a giant squirrel, hawks, monitor lizards, wild dogs, and deer. There was wildlife around every corner. On this day we had so far seen absolutely nothing. I had been given a different guide, so I was beginning to blame this on my new guide as if he had mystical powers to conjure up animals in the jungle and today his mojo was off. 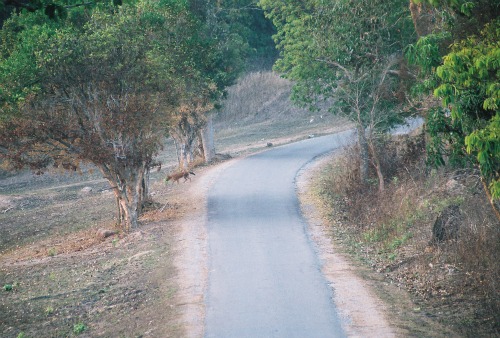 A wild dog crosses the road, but that happened the day before

Within about 15 minutes events completely changed and the afternoon took a dramatic turn. There is a saying that things happen in threes and this was definitely the case for me. First, we spotted a hornbill in a tree right above us. These birds spook easily and can be difficult to photograph. This one posed calmly on the tree for a few minutes before flying away. It turned out to be by far my best shot of any bird during the three days I spent here.

A few minutes later I was hiking along when movement of the slithering variety occurred to my very near right. It was a snake. I did what any normal hiker would do when observing a snake in a foreign jungle. I jumped about five feet in the air and yelled “SNAKE!” 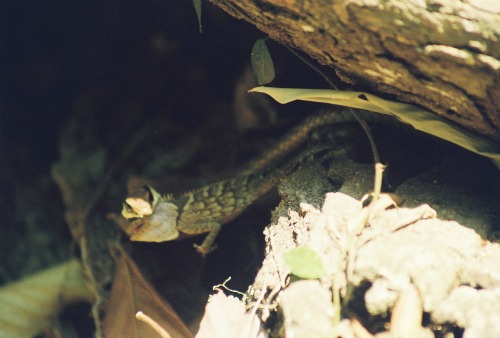 Slender snake getting ready for a feast.

Five minutes after the snake confrontation another animal encounter took place. This one much much larger. My guide all of a sudden tore past me on the trail yelling “CHANG, CHANG.” From my limited grasp of the Thai language I knew this word was a Thai beer, but it also meant elephant. I did not think my guide really needed a beer all of a sudden, so I deduced that an elephant was running towards us.

I have heard conflicting reports about elephants. Some nature shows depict them as peaceful soulful creatures which only harm when threatened. Other reports I have heard describe them as stampeding dangerous beasts. Without much time to decipher my thoughts on elephants, I decided the best thing to do was follow my guide, so I took off after him. We hid around a copse of trees and peered down the trail. 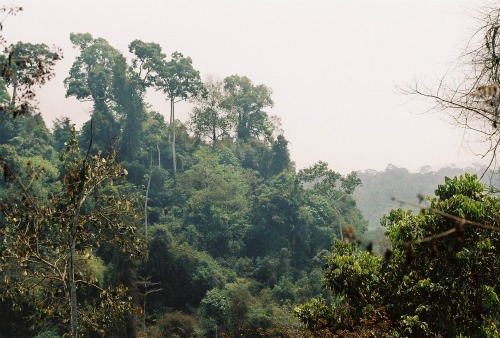 In the jungle the mighty elephant stampedes up a trail today

My guide had recovered his composure, and he urged me forward to take a picture. I moved forward and the elephant and I were both on the trail about 100 feet from each other. I swung my zoom lens forward and focused to take a picture. I had the whole face of the elephant in the picture, and he swung his snout up. It would have been the perfect picture.

When I snapped it the picture would not take. There was not enough light and I also had a wide brimmed hat on. I took the hat off, but the elephant decided he had had enough of us and turned off the trail and lumbered through the jungle. I got an out of focus picture of his side as he crashed through the undergrowth. I turned and watched the amazing beast take off. 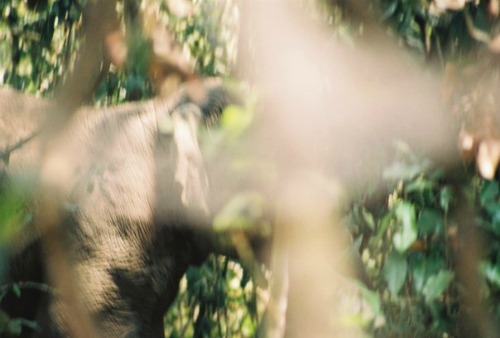 This is the out of focus side shot, but I have a great memory

Despite failing at the perfect picture, it was a memory and visual I will never forget. When you are hiking in the jungle and there is not much going on. Don’t blame your guide as just around the corner could be the most amazing sight you have ever seen.

For those in Thailand, make sure you visit Khao Yai National Park. Take a bus from the Mo Chit bus station to Pak Chong. It is about a five hour trip. Then jump on a jeep at the Pak Chong 7-11 and you are there.