A kayaking adventure on Lake Superior

Lake Superior, also known as Gitchee Gumee, has long been one of my favorite bodies of water. I have been fortunate enough to hike the entirety of  Isle Royale National Park, which is an amazing island in the middle of this huge lake, but I have never been lucky enough to kayak on it. Today’s guest post is by Leigh McAdam from hike, bike, travel, and she recently returned from a kayaking adventure, and here is her story. Her follow information is linked below this awesome post. 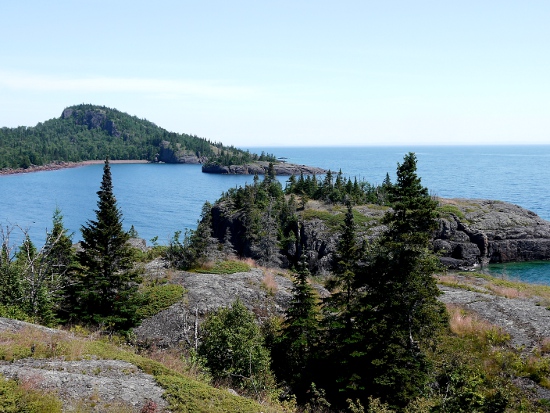 You can’t be serious says my 81 year old retired BC Ferries captain neighbour. You’re kayaking on Lake Superior? Do you realize it can be more dangerous than the North Atlantic?

Those were the words that stuck in my head as I headed to Lake Superior for a week of kayaking last summer.

But first a little background on Lake Superior 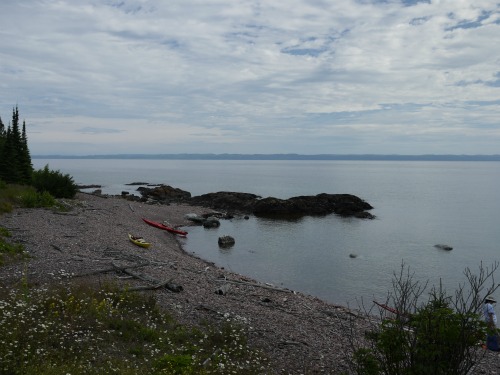 Cold water, a huge lake capable of making its own weather system and a reputation for sinking ships.

Our group of four did. We all love a challenge but at the same time we were aware of Lake Superior’s reputation and the fickleness of its weather. We chose to kayak around Mitchipicoten Island with a guide in July – when the weather is the most predictable and storms are at a minimum – partly from the logistical perspective and partly because of the lake’s reputation. 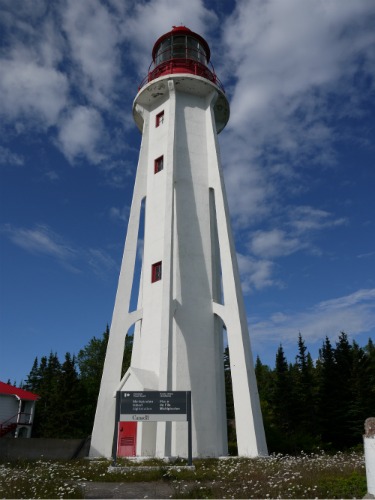 All of us were competent kayakers – but none of us could do an Eskimo roll. Our 26 year old guide Ginny was in a different category altogether – hardcore, nerves of steel and so skilled she paddled Lake Superior alone for two plus months the summer before.

Imagine kayaking around an island where you don’t see another soul for days? Where you don’t hear even a motorboat engine? Or see a plane?

Wilderness and all that goes with it, is why the four of us and others kayak Lake Superior. We all love the rhythm you get into – the waking in a tent and popping your head out to see how the wind blows, the breakfast that always tastes better outdoors, the physical exertion that comes with paddling for hours at a time, the wildlife, the history of the area and the ability to fully relax with no interruptions from the modern world.

We got that in spades from Michipicoten Island. 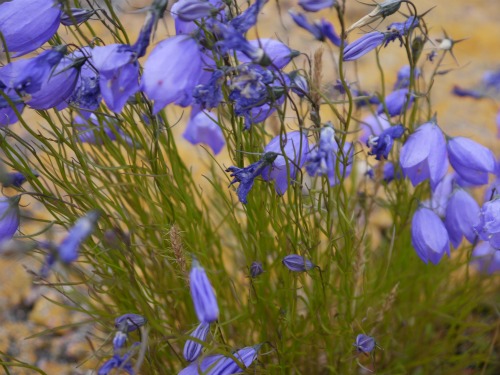 It’s an island with an interesting native history. The spirit of Mishipizheu according to Native lore, resides on the island as well as in the depths of Lake Superior.  As one story goes, in the late 1660’s four Natives tried to carry away a canoe load of copper nuggets – nuggets that were the cradles and toys of Mishipizheu’s children.  As they paddled away from the island, a great underwater Manitou spoke to the men and soon after all four died. Since then and continuing to the present day, many Natives refuse to land on the island, or any island in Lake Superior for that matter.

The six day paddle around Mitchipicoten Island provides spectacular paddling – past a rugged coastline broken by quiet coves and beaches, past abandoned fishing villages and a bay filled with shipwrecks. Most of the paddling we did was under sunny skies though one crossing to Davieaux Island happened in thick fog with only the compass pointing the way. 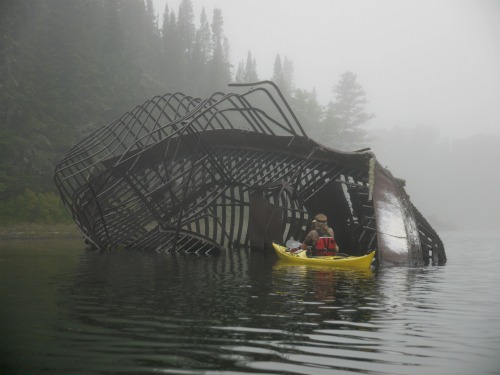 Kayaking adventure – Not the Edmund Fitzgerald, but a shipwreck nonetheless

On hot days it was tempting to go swimming – especially in waters that looked as seductive as those in the Caribbean. The best I ever managed was an in and out, with a scream to punctuate my feat.

The island is famous for its herd of woodland caribou. Some days, especially at dawn and dusk, we would see them walking the beach – and once we glimpsed a rare albino caribou. Beavers are plentiful in the interior and there’s enough birdlife to keep a novice birder happy. 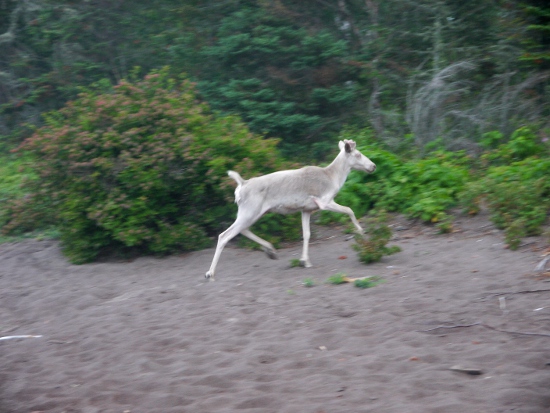 The shores of Mitchipicoten Island are a rock collector’s dream. Interesting colours and shapes had us all poking about on the beaches for hours at a time. That’s what you do when there isn’t an internet connection; one beach in particular was justly famous for its agates. 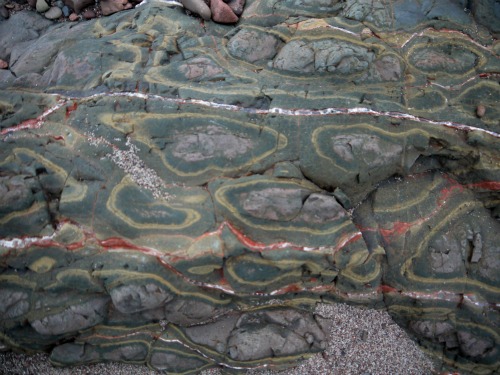 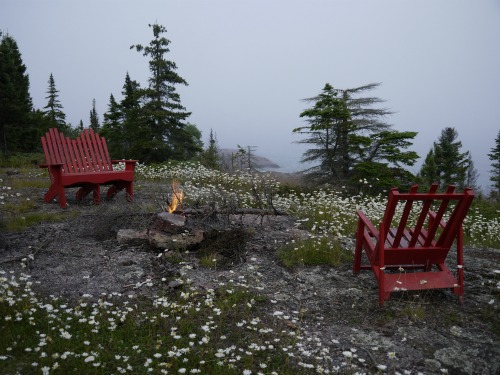 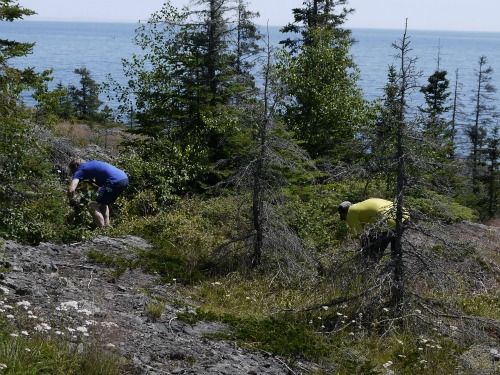 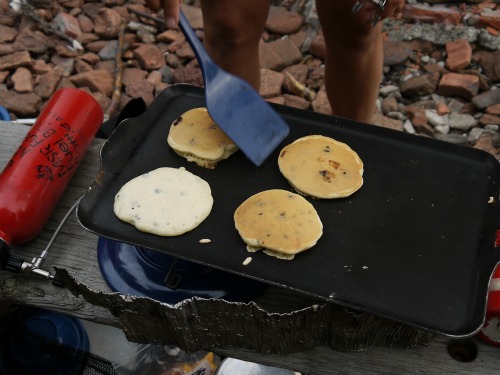 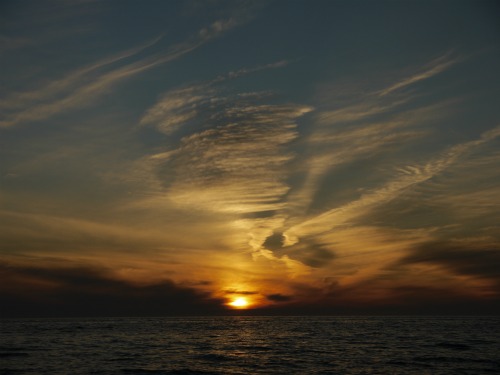 I’m not finished with Lake Superior yet!

For further reading I recommend: The Wolf’s Head by Peter Unwin and Deep Water Passage: A Spiritual Journey at Midlife by Ann Linnea. The second one is notable because she is the first woman to circumnavigate Lake Superior by kayak.

Thank you Leigh for the great post and pictures. Here is more about Leigh: She is an avid world traveler and loves outdoor adventures. When she isn’t traveling or blogging at HikeBikeTravel you’ll find her in the garden or curled up with a good book.