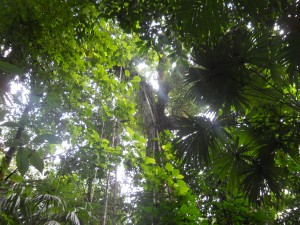 Many amazing sounds emanate from the jungle canopy

The howler monkey is an unforgettable sights and sound of Costa Rica. One of the delights in hiking in the jungle, rainforest, or even a regular walk in your local woods is the array of sounds. In the jungles of Costa Rica there are many sounds that bombard your ears.

In Corcovado National Park some of these sounds include the piercing whistle of the chestnut-mandibled toucan, the squawk of the scarlet macaw, the constant drone of the locust, and if you are lucky, the scream of a feline puma, ocelot, or jaguar.  The dominant sound that can be heard for miles around is the territorial battle between male howler monkeys.

When one thinks of jungles they think of monkeys and the comical sounds they can make from Tarzan movies and cartoons. Everyone at one time in their life has imitated this sound. When they do, usually they put one hand on top of their head and another underneath their armpit and make scratching motions while doing their best monkey imitation. 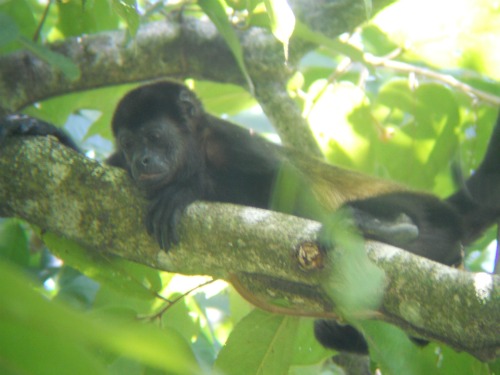 This is the sound the howler makes, but instead of comical it is awe inspiring and at first a little scary. Since it is a territorial warning, there is a belligerent tone in the call. If I did not know that is was a cute little monkey making this sound, and I was walking through the jungle and heard it for the first time I would be terrified.

The howler monkey cry is one of the many sounds of the jungle that haunt you and during your free time echo in your head. I will never forget sitting in front of the Sirena Ranger Station as night started to fall and heard the howler monkeys bellowing out from the jungle. I will also never forget my guide making an imitation of the sound on a Corcovado trail and having the monkeys reply (captured in the video). These memories assure I will return to the jungles of Costa Rica.

If you liked this post then enter your email in the box to get email notifications for each new entry. There is no spam and email information will not be shared. Other e-follow options include facebook (click on the like box to the right) or twitter (click on the pretty bird on the rainbow below).