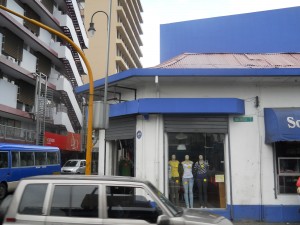 The hostel I stayed at last night was conveniently located half a block from the bus station in Alajuela, Costa Rica which had buses leaving every five minutes to San José. I was going to take a taxi, which would have cost $25.00, but thanks to the information I got from a dude in my hostel (great reason for staying in hostels), I grabbed the less than $1.00 bus ride into town.

The only problem with the bus was instead of delivering me to my hotel, it dropped me off in the middle of the city. My hotel was a little northwest of the city center. I could have taken a taxi from the bus stop, but I wanted to be adventurous and walk. Besides, I thought it would be a good opportunity to acclimate myself to the city.

Latin American countries are world renowned for having a laid back life style. Nowhere is this more on display than in the mapping system in Costa Rica’s capital. They do not have addresses, they don’t need no stinking addresses, instead they have numbered avenidas (avenues) and calles (streets). The addresses are actually stated in terms of the street or avenue and what street or avenue they are in between. For instance, my hotel’s address was calle 13 between avenida 9 and 11.

This is just the beginning though. There is a main street both north/south and east /west. The main north/south street is Calle Central and the main east/west is Avenida Central. The avenidas going north of Avenida Central are odd number avenidas and those going south count in even numbers.

If you are feeling confused and frustrated with this explanation, you should be. It gets even crazier though. Many of the calles and avenidas do not have street signs at the intersections. Some have them on the corner buildings, but less than fifty-percent. 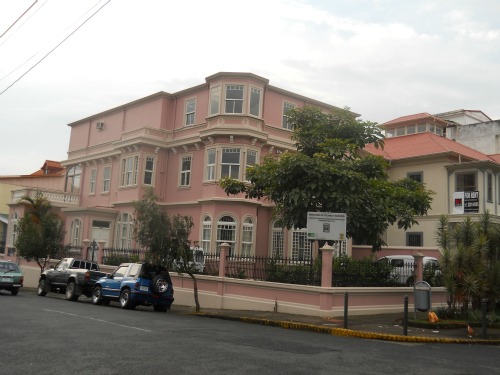 I walked west from the bus station and went four blocks with my heavy backpacks in a driving rain before I saw an Avenida 2 on one of the corners. However, there were no calle signs on the cross streets, so I was not sure if I was going the right way on Avenida 2. In the U.S. we usually can check the address numbers to see if we are going the right direction, but there are no addresses here.

I finally came upon the Teatra Nacional, which was on my Lonely Planet Map and realized I was going the right way. From there I realized I was at the intersection of Calle 5 and Avenida 2. I counted the blocks to Calle 9 and turned north.

A few blocks later, another rare sign on the corner of a building showed I was actually on Calle 7, so I had to go a few blocks more west. I finally made it to my hotel a sweating mess, but proud that I had met the challenge of the San José address less calles and avenidas and found my destination. Next time I will take a cab or get up the nerve to ask someone a question in Spanish.