A visit to Hiroshima is a sober reminder of the horrors of war.  This post is a part II.  Read part I here.

Any tour of the museum complex starts with a visit to the A-bomb dome. The city itself is vibrant, modern, and alive, but they decided to keep this building just the way it was after August 6, 1944. They have left this building preserved in rubble to remember that fateful day.

The building itself was built by Czech architect, Jan Letzel and completed in April 1915, and was named the Hiroshima Prefectural Industrial Promotion Hall. On August 6, the bomb detonated 490 feet almost directly above the building and amazingly the structure withstood the blast, but it was completely gutted.

This travel blog photo’s source is TravelPod page: So many traditions, so much culture …

The A-Bomb Dome above prior to World War II. 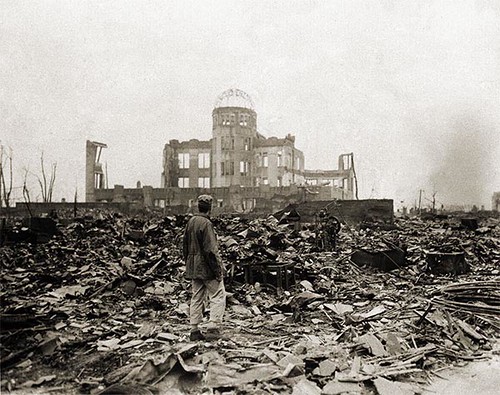 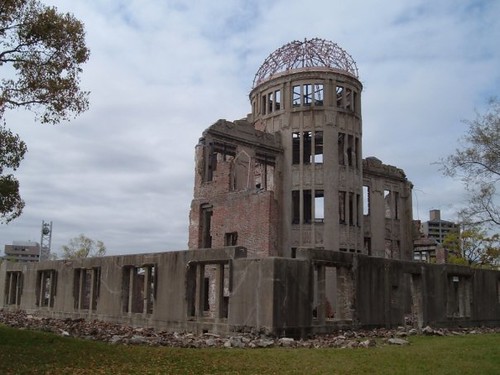 The Peace Arch or the Peace Cenotaph is the next stop. The arch is perfectly aligned so visitors can step to one side and see the A-bomb building in the distance through the arch. Under the arch lies a chest with all the names of those that died inside it. Sadly, names are being added to it each year as information yields new victims and those that were maimed by the bomb finally pass away. There is also a peace flame underneath that will stay alight until all nuclear bombs are gone and the threat of another Hiroshima ceases. 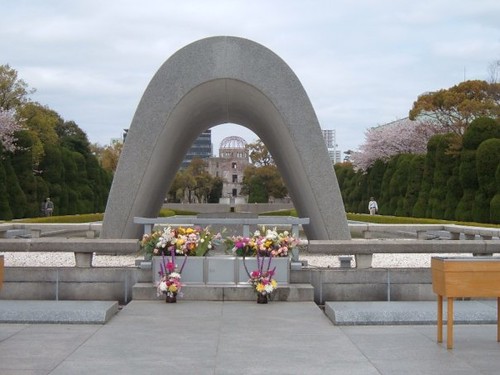 The A-bomb dome as seen through the Peach arch

Close by is the Children’s peace memorial in memory of Sadako Sasaki. Sadako was two in 1944 and lived one mile from the explosion. Ten years later she was diagnosed with leukemia. According to an ancient Japanese story those that fold 1,000 origami cranes will be given one wish by the crane. According to popular belief Sadako felt if she could fold 1,000 cranes she would be cured. When she passed away she had only folded 644. School children from the around the world have helped her finish and added thousands more. They are now found at the Children’s Peace Memorial. 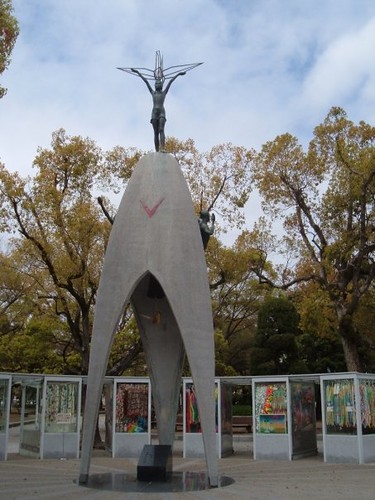 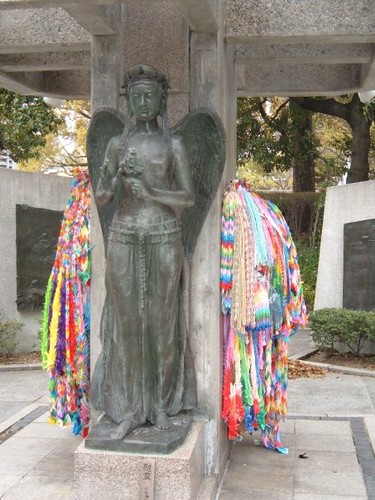 The Peace park and the A-bomb building will have already created quite an emotional impact, but just wait to one enters the museum. There is one room in particular that I will never forget from the museum. This one room contains burned articles of clothing worn by children who were exposed to the bomb. Underneath it they contain each horrifying story.

A typical story goes like this: Kazuki was 9 and was working in a children’s unit clearing out bombed buildings when the explosion hit half a mile from their unit. He received burns over three quarters of his body. He walked three miles home where his parents did not recognize him. He died from her burns three weeks later.

This story is heart rendering, but just imagine reading one story after another in similar fashion. There are few dry eyes that depart that room. The UN should pass a resolution that anyone who enters a high government position is required to walk through this room at the Hiroshima Peace Museum. No one in their right mind would want to start a war after hearing these tragic stories.

After three hours in this museum my friends and I retreated for some sake and beer. The museum was one of the most emotionally exhausting three hours of my life, but it is a place that everyone needs to visit. Many feel the bombs were necessary and justified in order to end the war. It is true that the bombs made the invasion of the Japanese home islands unnecessary, which would have inflicted untold carnage to invaders and the invaded alike, but to visit the museum it brings home how horrid war is.

Getting to Hiroshima is easy. The quickest way is by the bullet trains or shinkansen, which run through Kyoto, Tokyo, and Osaka. They are not cheap though and other less expensive trains and buses also provide service to the city.

This post is the fourth in a series of articles regarding visiting Japan in order to encourage tourism in the wake of the dreadful earthquake and tsunami on March 11, 2011.    Please consider a donation to the cause through either the Red Cross or from one of these Japanese organizations.  Follow other bloggers on twitter participating through either the #blog4Japan or #Japanlife hashtag.