No pain no gain in Quetico Provincial Park

In the previous two posts, I described how sometimes there is a price one has to pay when adventure traveling to reach one’s goal.  The first example of mine was a bus trip from Bangkok to Siem Reap.  Today and tomorrow will describe the same type of situation on a canoe/fishing trip in Quetico Provincial Park in Ontario, Canada. 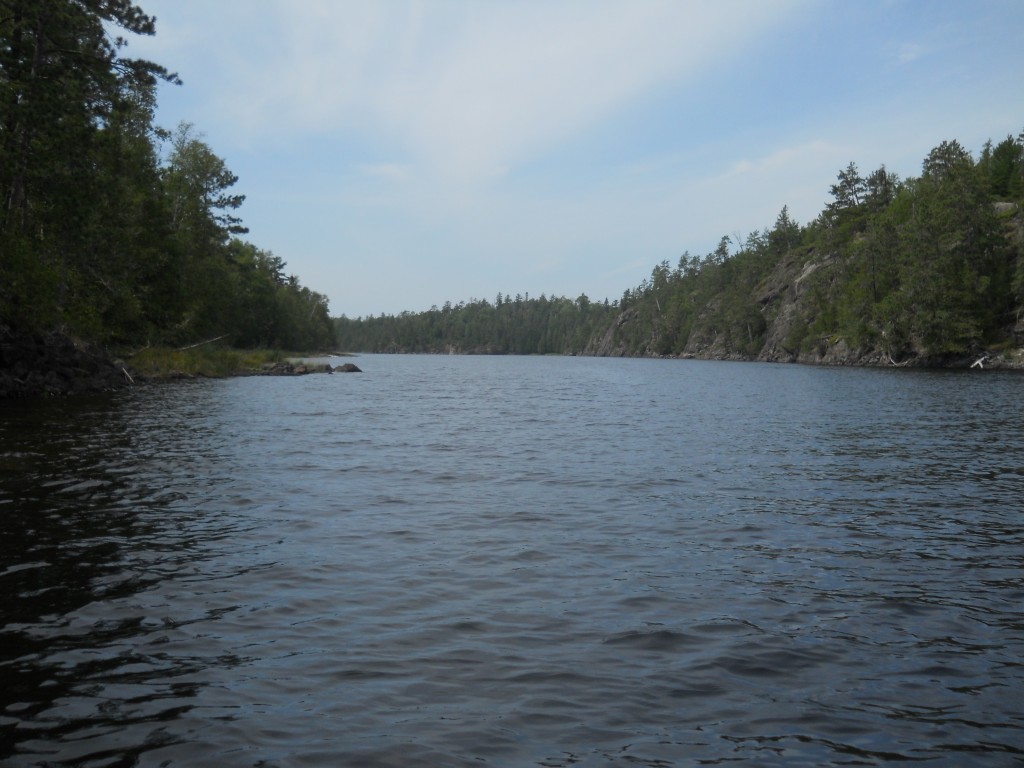 This last summer I went on a wilderness canoe and hiking trip with my Dad in Quetico Provincial Park in Ontario, Canada.  The park is just across the border from the Boundary Waters Canoe Area in Minnesota, but is much more remote and pristine than its American counterpart.

The goal of the trip was to get to the center of the park, which is Lake Kawnipi as soon as possible and then spend as much time there as possible.  Lake Kawnipi is the Valhalla of destinations in Quetico.  Since it is a two day paddle through difficult portages very few make the journey and the fishing is incredible. 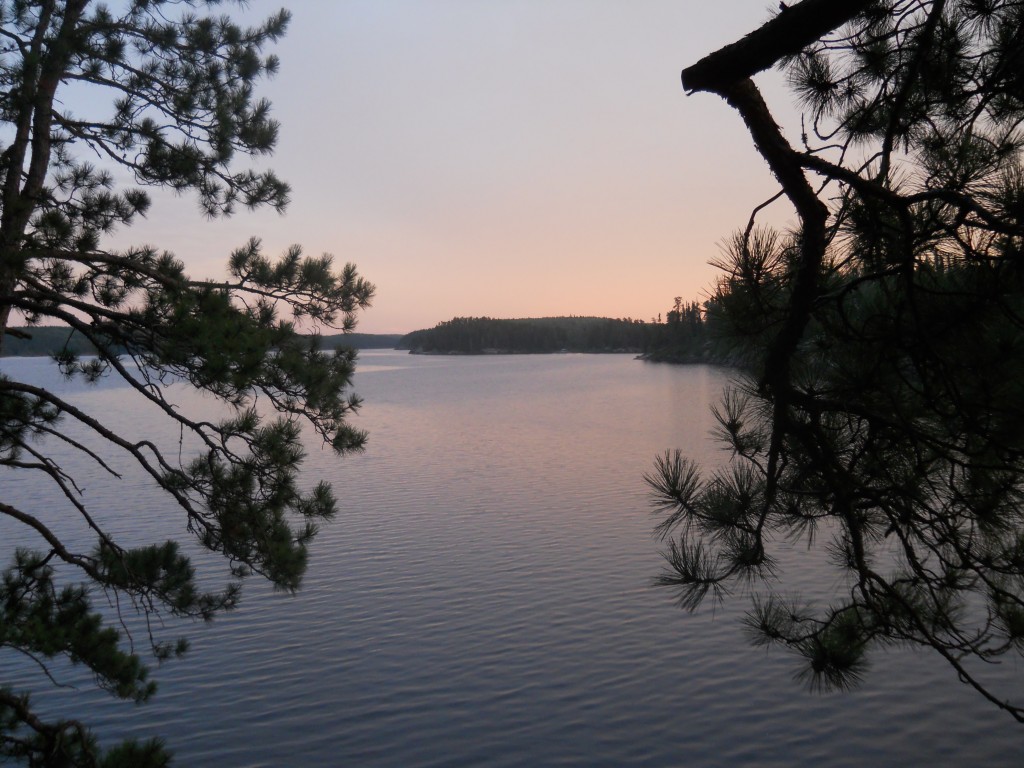 One reason why Kawnipi is the goal

We received a tow to the park’s border through Voyageur Canoe Outfitter and after over two hours getting permits and fishing licenses at the Cache Bay Ranger station we were finally free to begin our adventure.  Due to the late start we only got half as far the first night as planned. 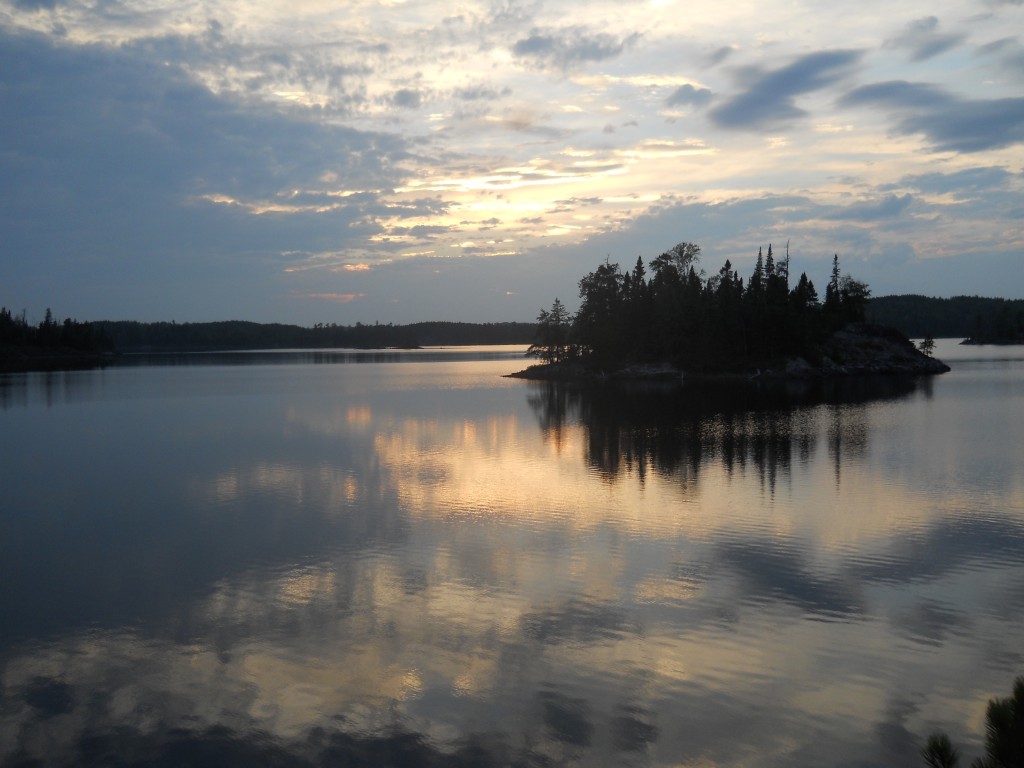 The first night’s campground was in a marshy area and the mosquitoes were horrendous.  As soon as we set foot at the campsite we were attacked and it was midday.  At dusk and night the harassment intensified.  My Dad and I sat in our chairs and had a few tugs of ole granddad and were just swarmed.  We would turn on our headlamps and there would be hundreds of mosquitoes swarming in the beam of light.

We invented a new way to quantify the mosquito annoyance by making a rough estimate of the number of blood suckers that would hover in the beam of light when the head lamp was turned on.   We called it the mosquito per beam (MPB) calculation.

The next morning we were awoken to heavy rain.  This is probably the worst time for rain to fall because no one wants to break down camp in the rain.  It finally stopped, but it delayed departure by a couple of hours and then we had to break down a wet camp. 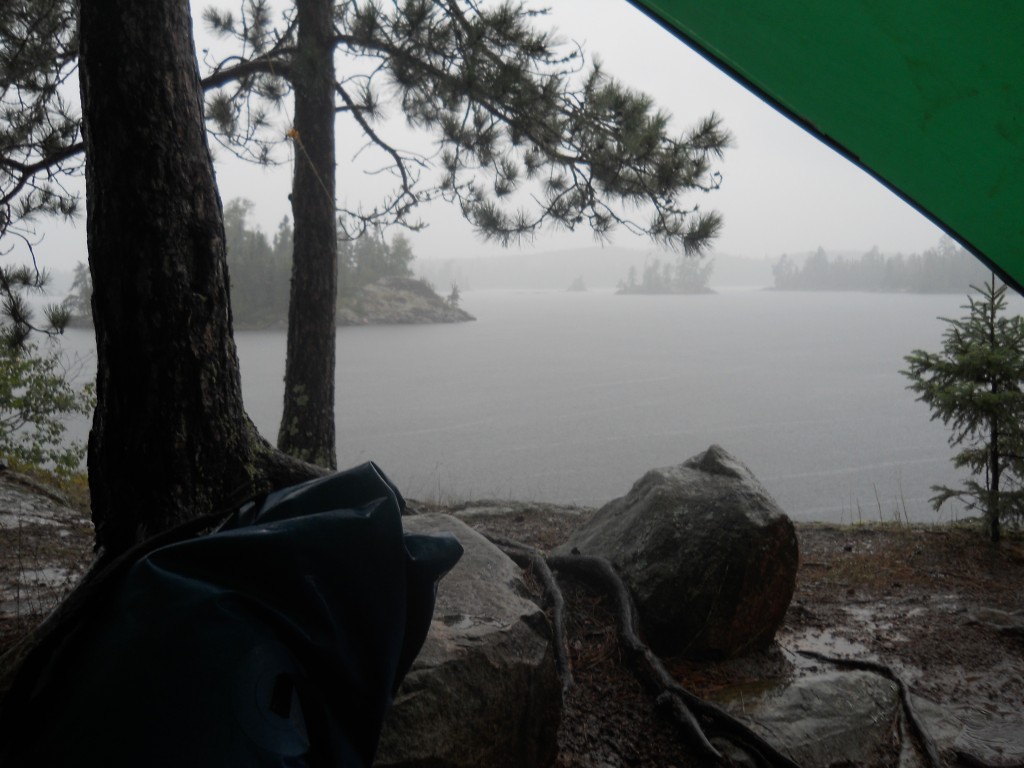 We then proceeded to enter the Falls Chain.  To get to Kawnipi through the south entry point it is necessary to paddle and portage past nine waterfalls.  They are all beautiful, but the portages around them can be especially grueling.  Coco Falls is a half mile and the portage is a swampy boulder field.  Not an easy trail to carry canoe and equipment over. 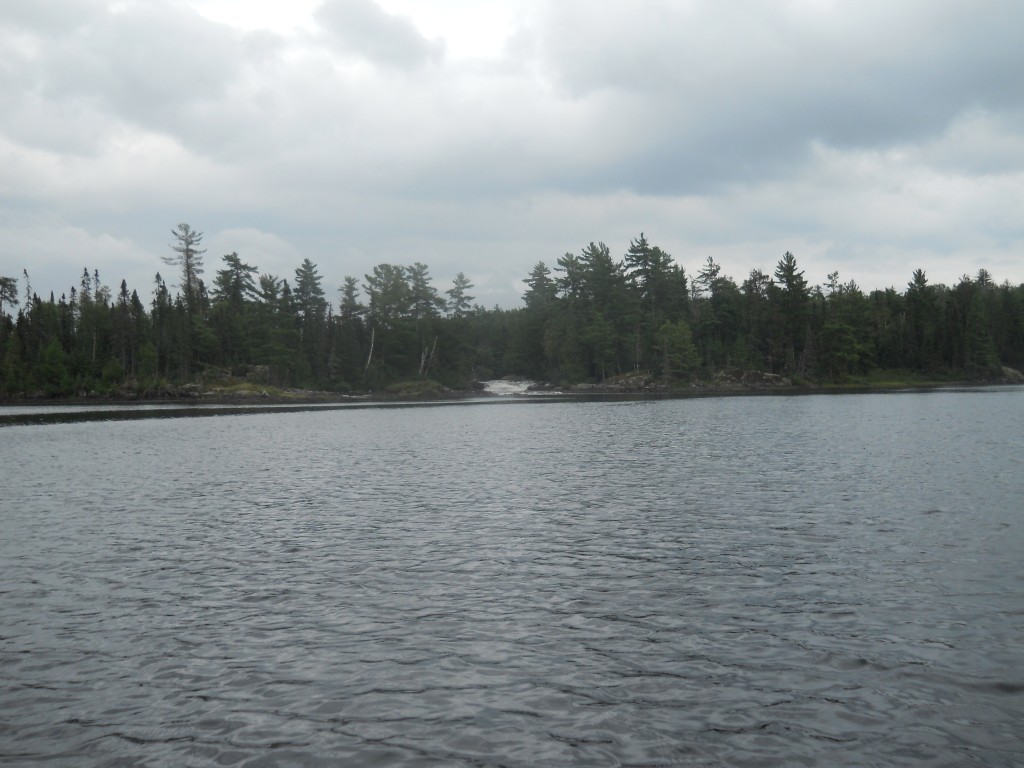 Looking back at 2nd falls on the Falls Chain

The difficulty of the portages was compounded by the heat and the mosquitoes.  Usually in Canada in August the weather is a pleasant mid 70s to lower 80s.  This year however it was a humid high 80s.  This is not the type of weather that is ideal for carrying heavy canoes and equipment through the wilderness.  We were all dripping with sweat after even the shortest portages.

The mosquitoes were omnipotent and ferocious all day and night.  They were especially troublesome on the portages.  When carrying the canoe a whole colony would stay with the portager and dive bomb ears and bite necks.  This is difficult to deal with when carrying an 80 pound canoe.  The only relief was by walking fast.

There were times when it was necessary to walk slow as there were rock faces that required careful walking with the canoe.  Sometimes the canoe got caught in a tree and the portage would come to a halt.  The mosquitoes took advantage of these delays and unmercifully attacked with maddening effect. 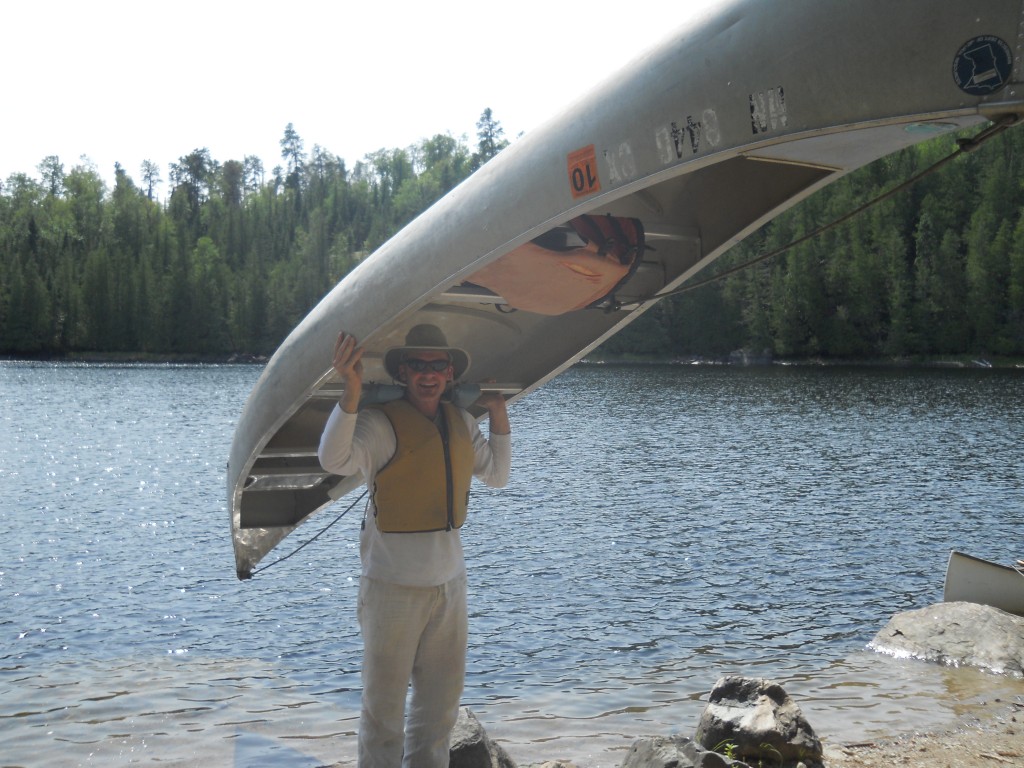 I may be smiling now, but will not when the skeeters attack

They say when it rains it pours.  And that is what happened in the middle of the day.  It started to pour again.  We huddled at one of the portages in our rain gear and swatted the hordes of mosquitoes.  It is times like this that you wonder why you go camping. 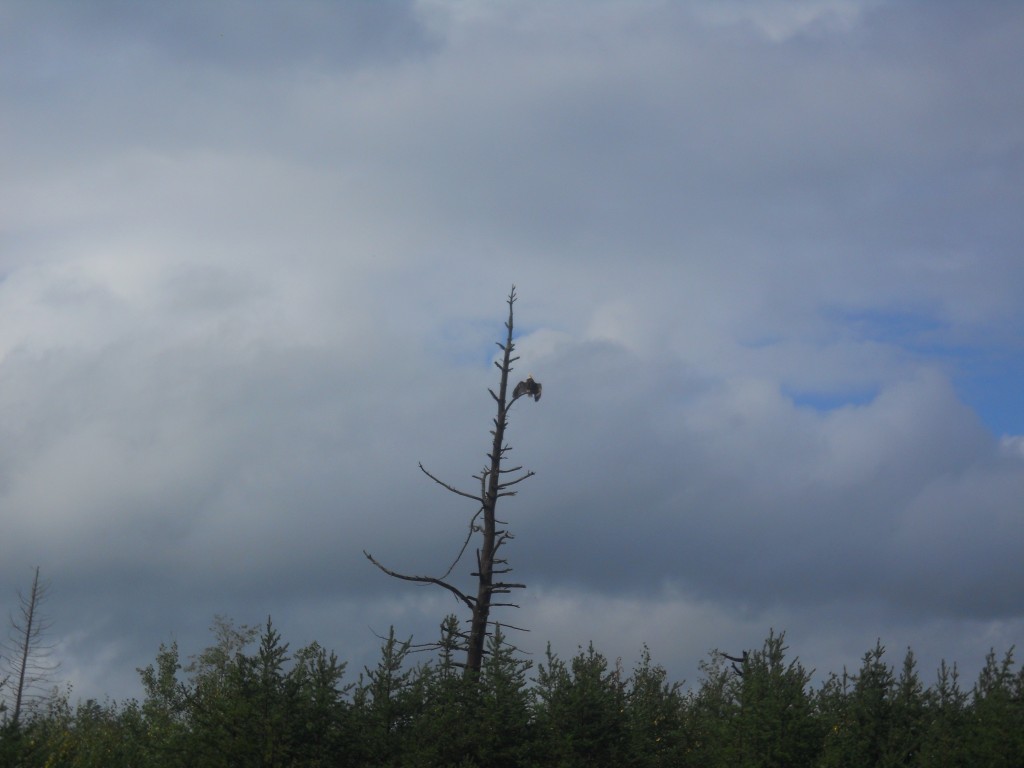 Even the bald eagle knows you have to go through adversity. It may be wet now, but a tasty fish is in its future

It finally stopped and we called it a day and stayed at one of the worst campgrounds ever that night.  The mosquitoes were even worse than the campground from the night before.  We hastily ate dinner and went to bed around 7pm to avoid another frustrating evening with a high MPB count.

Tomorrow’s post will describe how this miserable beginning magically turned around.