No pain no gain on the way to Siem Reap, Cambodia

In the previous post I introduced adventure travel no pain no gain and how this would be the subject for the next two posts.  The first remembrance comes from a bus trip from Bangkok to Siem Reap, Cambodia, home of the famous Angkor Temples.  This trip occurred in February of 2005.  Since this trip I have heard that the road has been improved, so that travelers need not experience this horror.

I had heard some warnings from other backpackers of a nightmare 13 hour trip, but I passed it off as hysteria.  I got on board a bus off of Kho San Road and had three seats to myself and the bus was air-conditioned.  This was proof people that spread the warning had no idea what they were talking about.  The trip to the Cambodian border once out of Bangkok traffic was a breeze, but everything changed at Poipet.

The guides said we had to take everything off the bus as the bus was going back to Bangkok. We got into a line that spilled outside the immigration building and the line was incredibly slow and we roasted in the 90 degree sun.

We all looked forward to when the line would shorten and we would be inside the building and out of the sun.  This finally happened and it was a case of be careful what you wish for as inside there was no air-conditioning and only one or two fans, so instead of roasting in the sun we now baked in a hot stuffy room.

After a sweaty, stuffy two hours, we finally entered Cambodia and our group entered a large bus.  It is always a relief to be on a large bus instead of the smaller cramped ones.  All of a sudden some other Cambodians came on and said to get off the bus. They told us a larger group needed to use this big bus, and we were then herded into a mini-van.

I could not imagine how all us would fit as there were over twenty of us. I was one of the last in. I looked inside and all the seats were taken. They had these mini seats that opened in the aisle that were low to the ground, which I had to take.

The condition of the road was absolutely horrible. Now I understood what the warnings in Thailand were about and that they were no lie. There were small sections where the road was paved, but then they would give way to dirt and gravel and huge potholes. When our over capacity bus hit these potholes, the driver had to slow down to an almost stop. When going through the potholes the whole bus lurched and all twenty of us bounced around. Since it was so hot, the windows had to stay open and dust kicked up from vehicles poured into the bus. 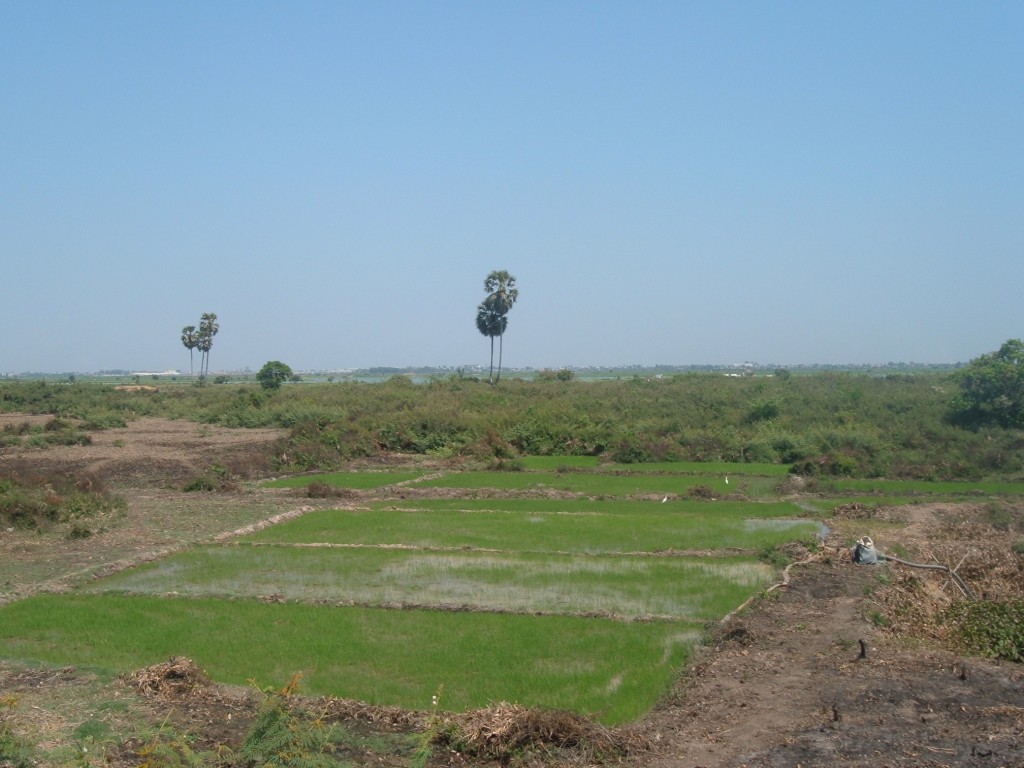 The scenery provided no break from the misery

We mercifully stopped for dinner, but when we got back on the bus I somehow found myself in a more uncomfortable position than before. One of my legs was wedged against someone’s luggage and the other was penned in by the seat beside me. This meant I could not shift my legs at all. I tried to shift my whole body back a bit and struck the person behind me in the face with my seat. I apologized and realized now I could not shift my back either. I basically could not move at all.

I was also not near any open window, so I could not catch the breeze coming in. Everyone on the bus was uncomfortable, so I do not think it really mattered much where one was sitting, but I think I had the worst of the worst. Everyone else was probably thinking the same thing. Comfort was nonexistent on our bus.

Then an amazing thing happened. The horrible road got worse. The potholes became more frequent and we also moved more slowly because we encountered many bridges and each bridge was only one way. There were also these huge inexplicable piles of dirt in the middle of the road for who knows what reason that our driver had to avoid. I think it is about a seventy mile trip from the border to Siem Reap. It took us over five hours to make the trip.

For those that do not know me probably think I am a big whiner, but for those that do know me can understand how awful this trip is because I usually am slow to complain.  I was just about to scream out loud in anger, frustration, fatigue, and any other word that evokes misery and discomfort when the bus started to all of a sudden pick up speed.

We amazingly hit a patch of pavement that was not broken by a pothole, or a one-lane rickety bridge, or a pile of dirt in the middle of the road. I did not want to begin to hope as I did not want to be cruelly disappointed when we hit the pot holes again. We kept going though picking up more speed. Soon there were buildings, lights, and road signs indicating we were entering town. Then we passed these huge hotels that could only be for foreigners visiting the Temples of Angkor. We all exhaled in relief.

The bus stopped and we spilled out at a guesthouse and got a room.  Soon Angkor beers were had and stories told about the nightmare made it seem only a memory.  As you can see from the pictures below the trip was worth it.  For a more updated account of Angkor read this post by Runaway Juno. 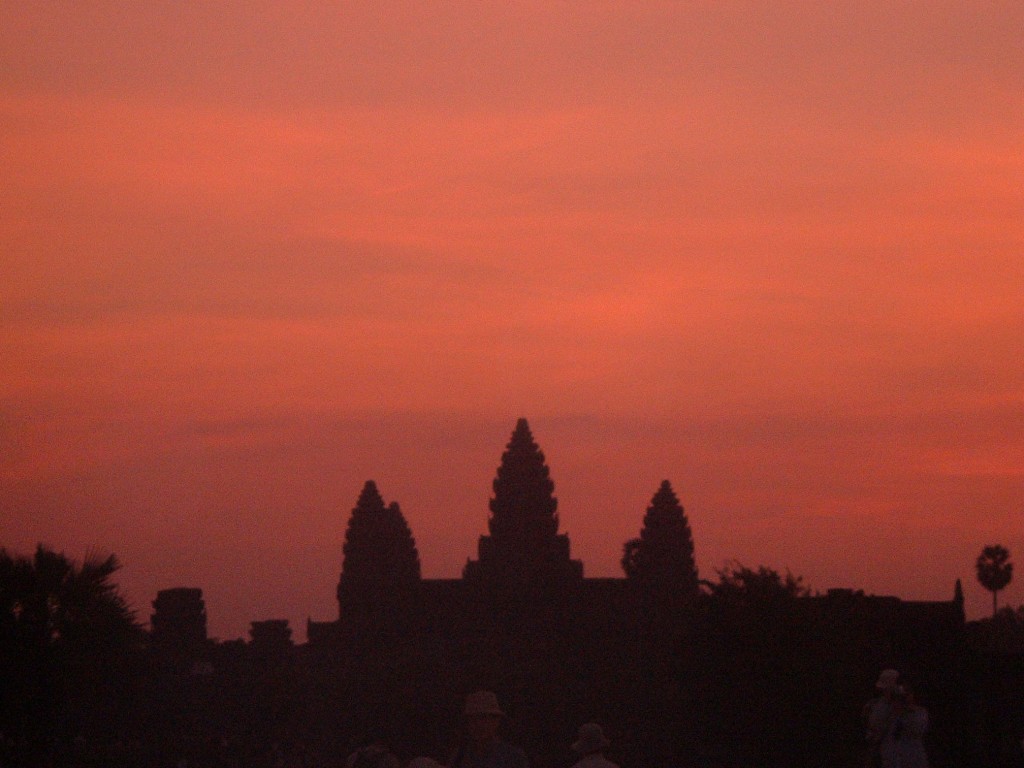 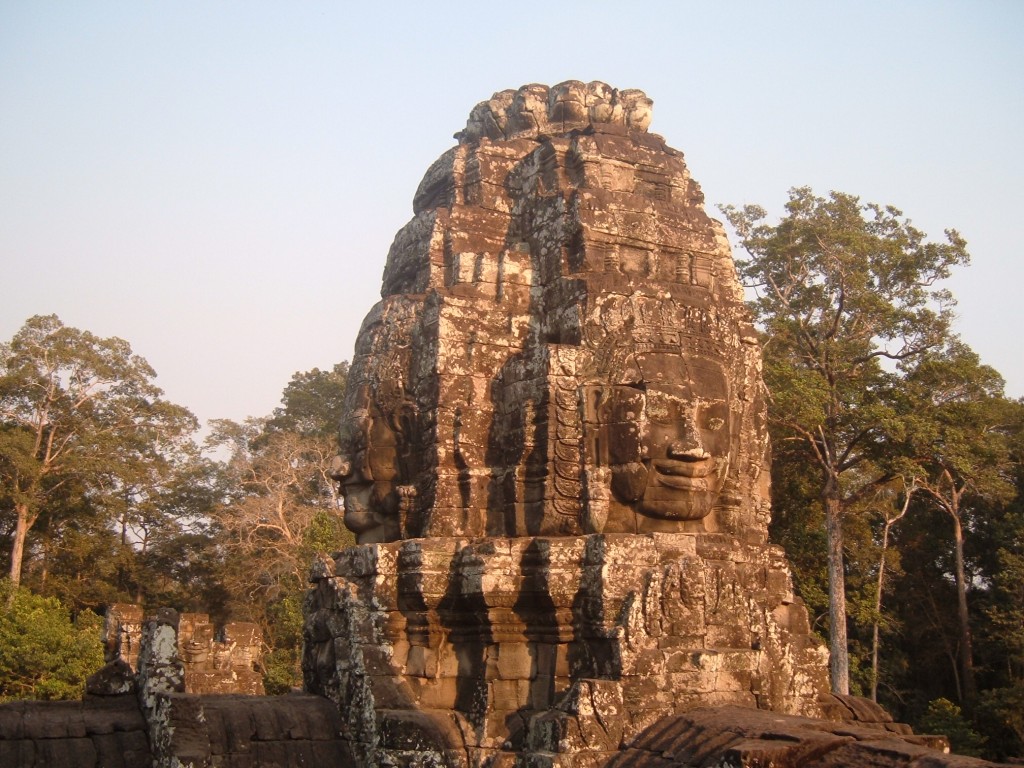