Pound for pound the smallmouth bass is one of the fiercest fighting fish in freshwater lakes. Walleyes and lake trout seem to be the fish of choice due to their incredible tastiness. If they cannot be located, bass fishing is a wonderful third choice. In August, I ventured to northern Minnesota for a BWCA smallmouth bass fishing trip. 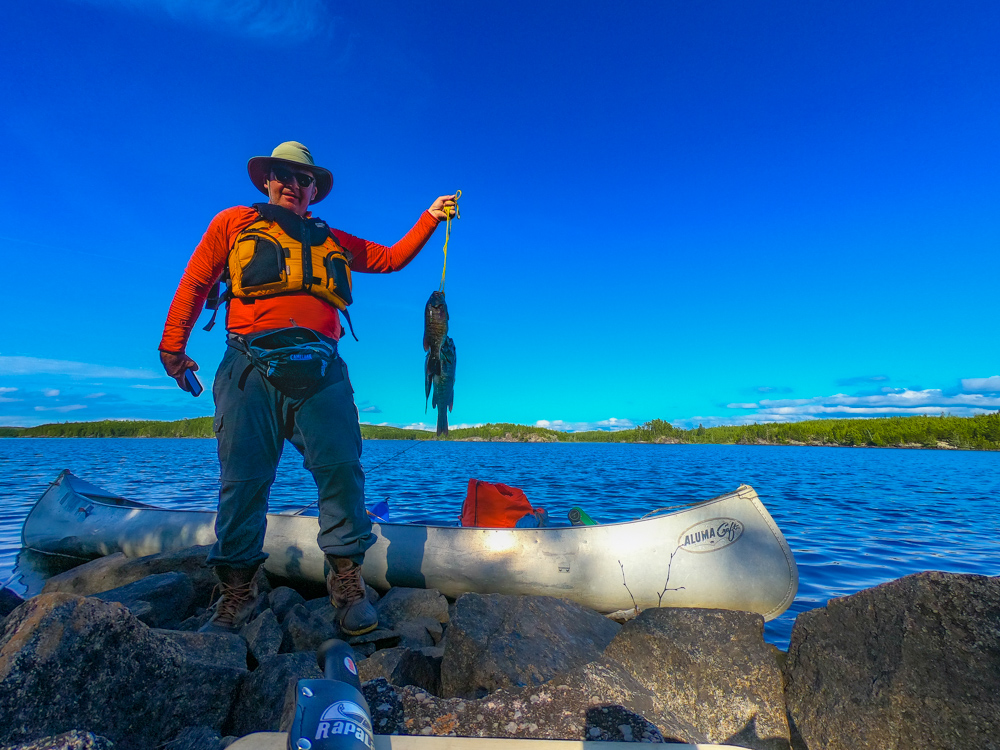 Memories of Boundary Waters trips past

The Boundary Waters Canoe Area (BWCA) is so special due to its popularity as a family adventure. I once attended a lecture on Saving the Boundary Waters by Dave and Amy Freeman at Canoecopia. They asked the audience how many had visited the wilderness area as children. Half of the attendees raised their hands. 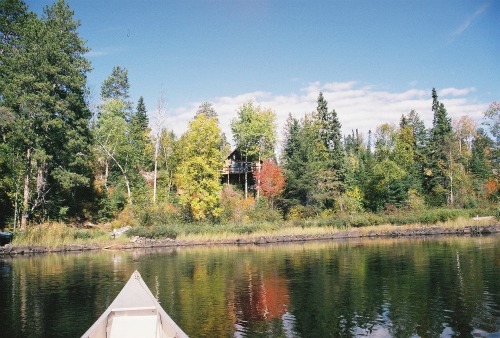 Our lovely cabin on the edge of the Boundary Waters

I was one of those who raised their hands. I enjoyed many Boundary Waters and Quetico trips growing up. My parents loved the area so much that they purchased a cabin on Gull Lake just outside the Superior National Forest.

On my last trip into the Boundary Waters, we camped on Horseshoe Island on Saganaga Lake. We took a day trip over Saganaga Falls and Horseshoe Rapids into Maraboef Lake. We fished the first bay after emerging from the Horseshoe Rapids portage. Our party enjoyed modest success catching nice smallies and then had lunch on an unusual hump backed island. 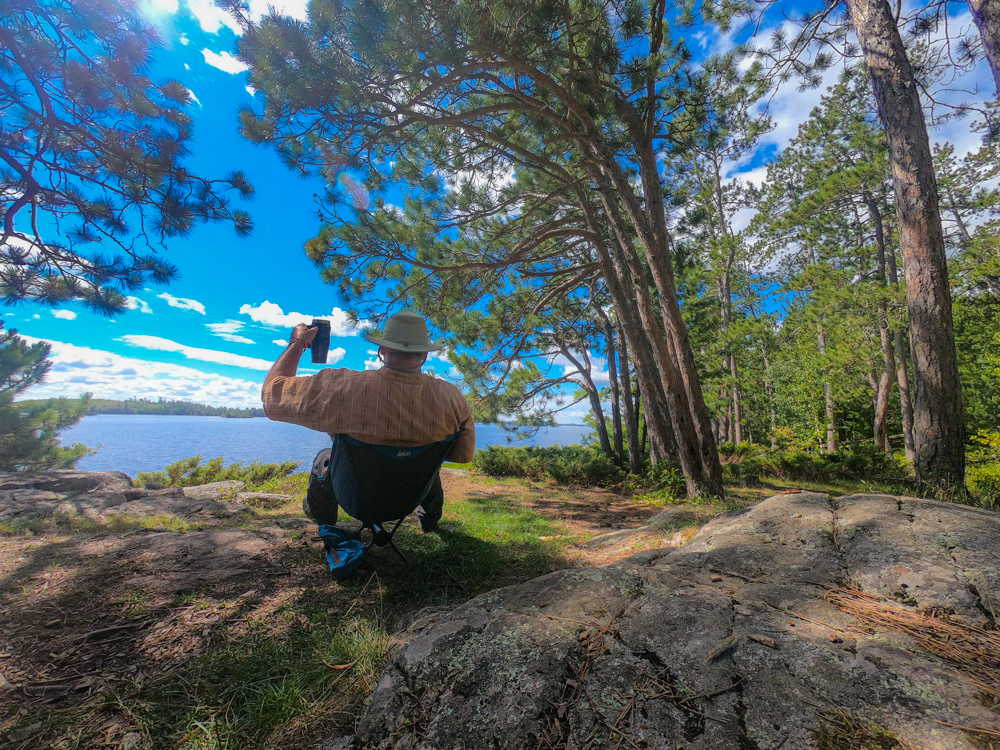 Enjoying some morning joe on Lake Saganaga on Horseshoe Island

That was over two decades ago, but the image of slaying smallies burned pleasantly in my memory. Thanks to that memory, Maraboeuf Lake was the focus of this trip.

Maraboeuf Lake along the Canadian Border a mini Kawnipi

Speaking of second choices, although I love the BWCA, Quetico is my preferred canoeing and fishing playground. Due to Covid-19, Canada is off limits to American adventurers thanks to our bungling national response. 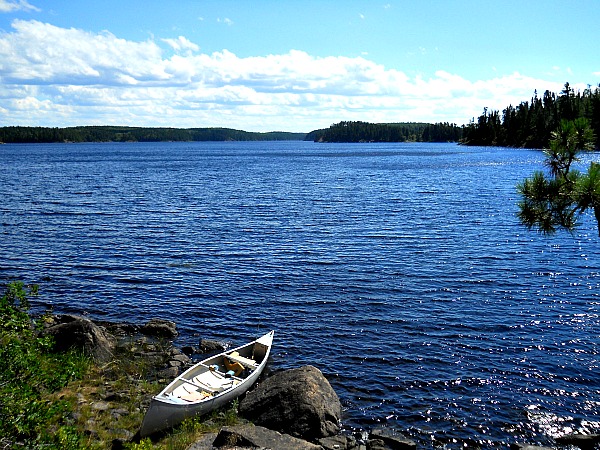 In the two decades since I paddled the BWCA, I have been on numerous Quetico expeditions. Kawnipi is one of my favorite places on Earth. Maraboeuf is like a mini Kawnipi, so I feel it was a good substitute. 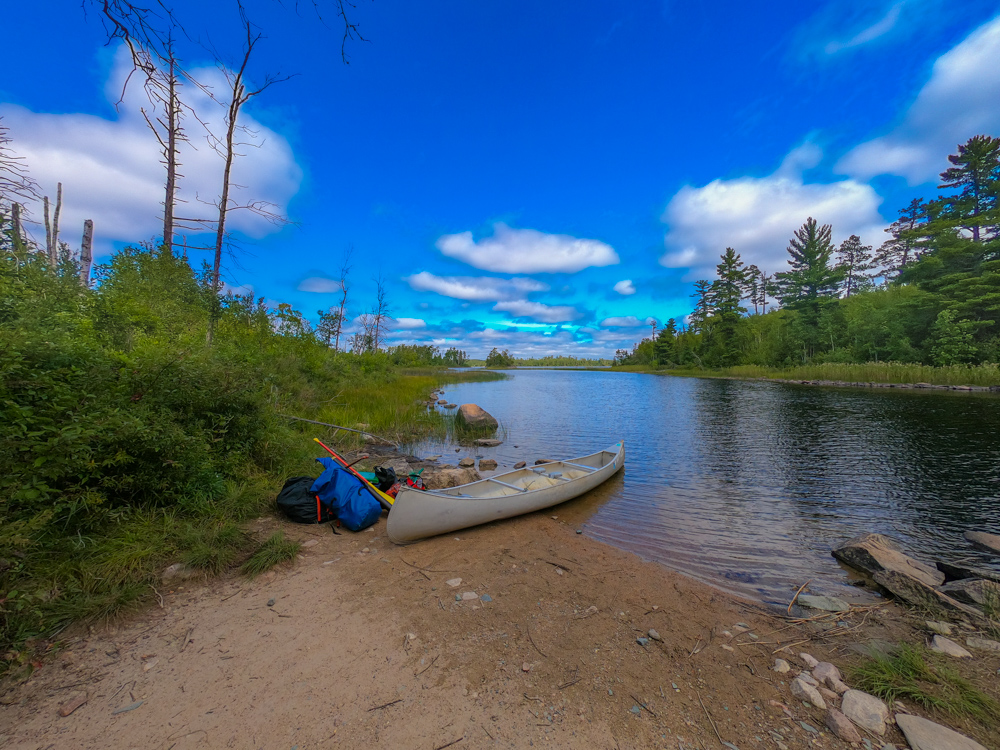 Maraboeuf is obviously not as remote as Kawnipi, but it is also very beautiful and structurally similar. Both of these slender lakes feature several large bays.

Related: No pain no gain to Kawnipi in Quetico

After two days on beautiful Horseshoe Island, I proceeded into Maraboeuf. The time of year was August. Water temperatures were more favorable to smallmouth than walleyes. 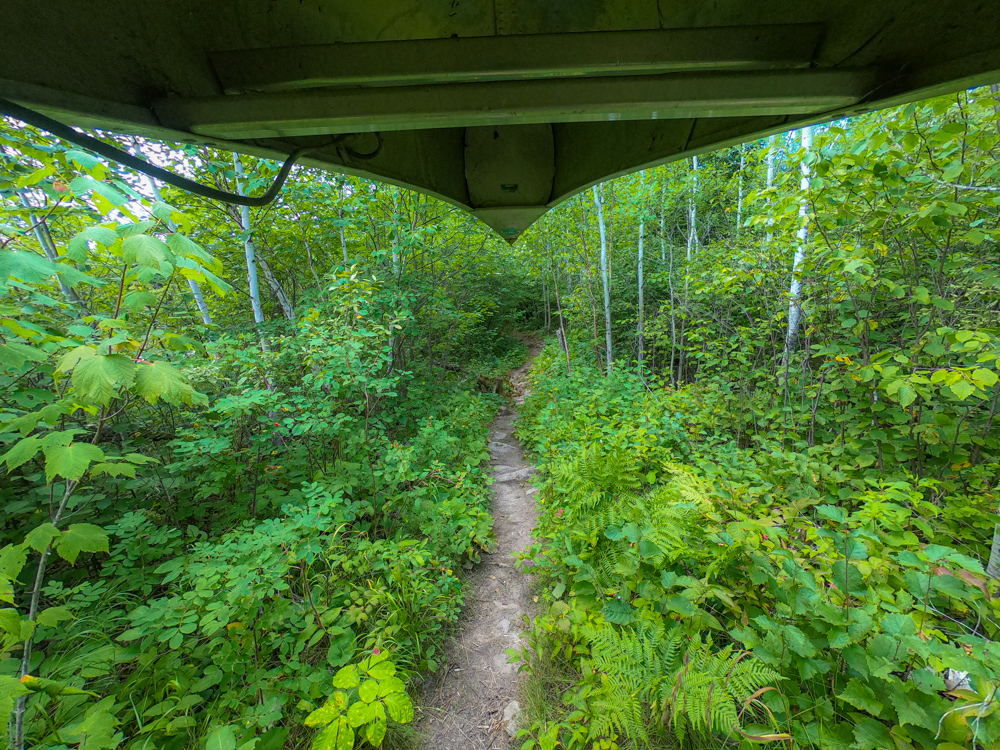 Fisherman most likely have better walleye success in early June or mid June. As summer progresses, the walleyes go deeper, but smallmouth and northern pike remain along the drop offs along the shoreline.

Once I navigated the two small portages at Sag Falls and Horseshoe Rapids, I proceeded to tie my lure on using a brown and orange mister twister with a 1/8 pound jig head. I was not using live bait or top water lures. 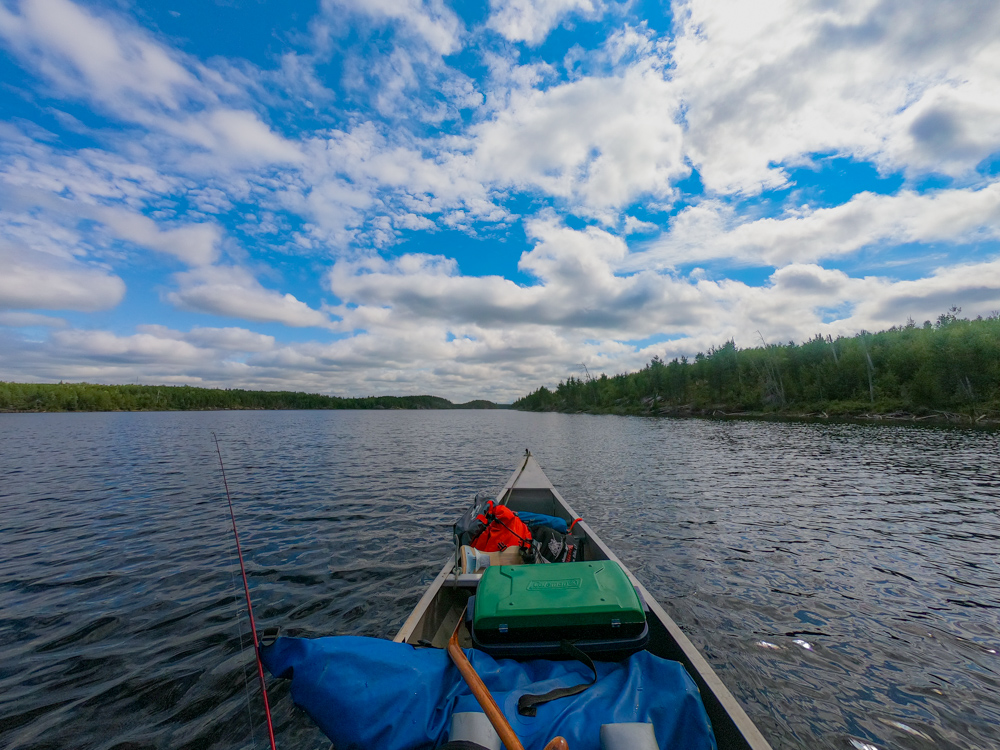 Maraboeuf is actually the border between the U.S. and Canada. Therefore, U.S. fisherman need to fish the western shore. The boundary through the lake actually goes vertical, so the U.S. shore is on the western side. 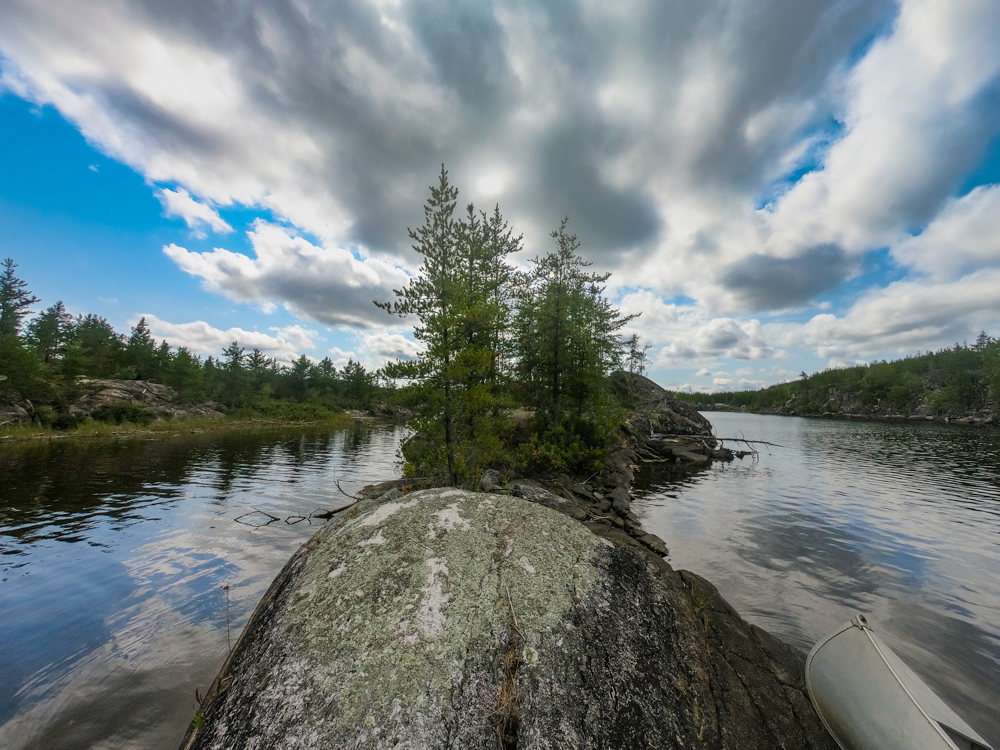 Humped back island on the first bay south of Horseshoe Rapids.

Maraboeuf features several shallow bays, and one of those presented itself as I paddled southwards. I noticed a humpback island as I trolled the shoreline. The memory of the family trip decades ago flashed in my mind. This was the same bay where I fished with my parents. 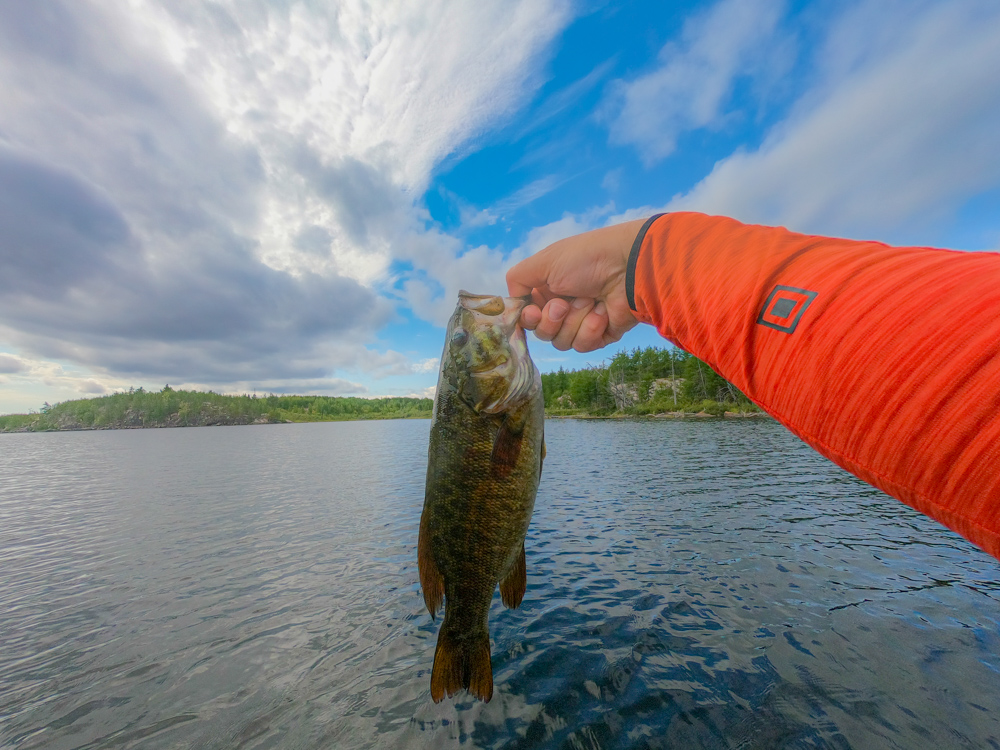 My first really nice smallmouth that would not be my last.

Almost immediately, my fishing pole bent almost in half towards the water. I picked up the pole and set the hook. Instantly, it was clear this fish had some girth to it.

I spent two days fishing around Horshoe Island with moderate success catching only 12 inch fish and smaller. It felt good to have a fight on my hands. The fish cleared the water before I reeled it in and netted it. It was a good three pounder. 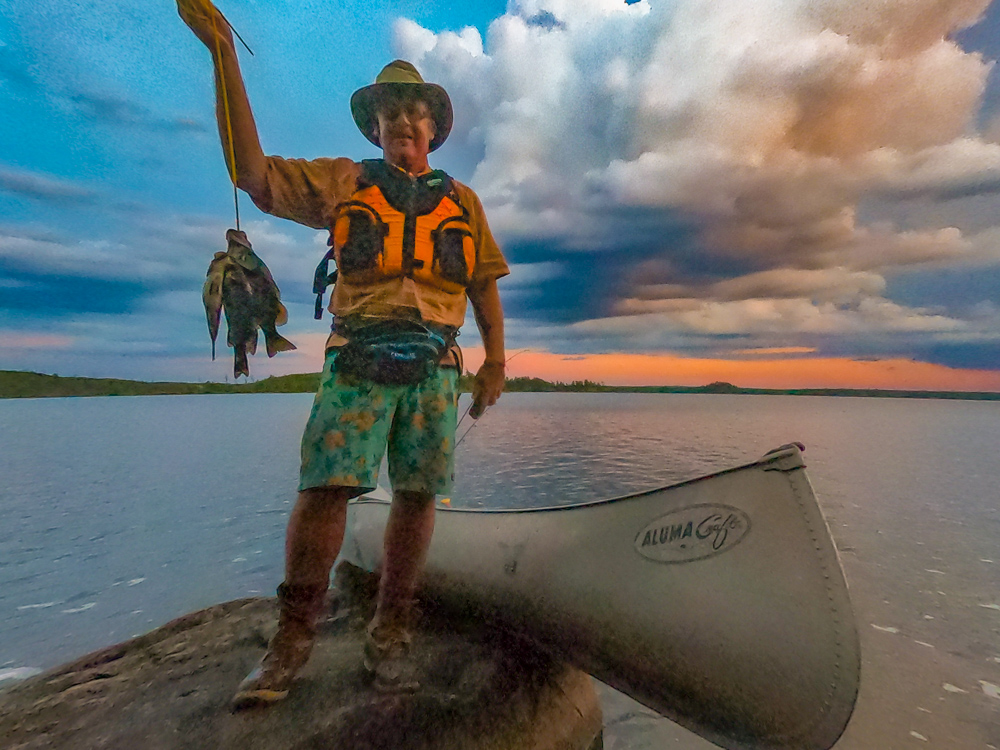 The camping spots on Maraboeuf were all about two or three miles south, so instead of staying in the bay. I continued fishing the shoreline until I reached the camp spot. I caught another decent one on the way. Once I arrived to the camping areas, I took the first open camp spot in the bay and proceeded to settle down and set up camp. 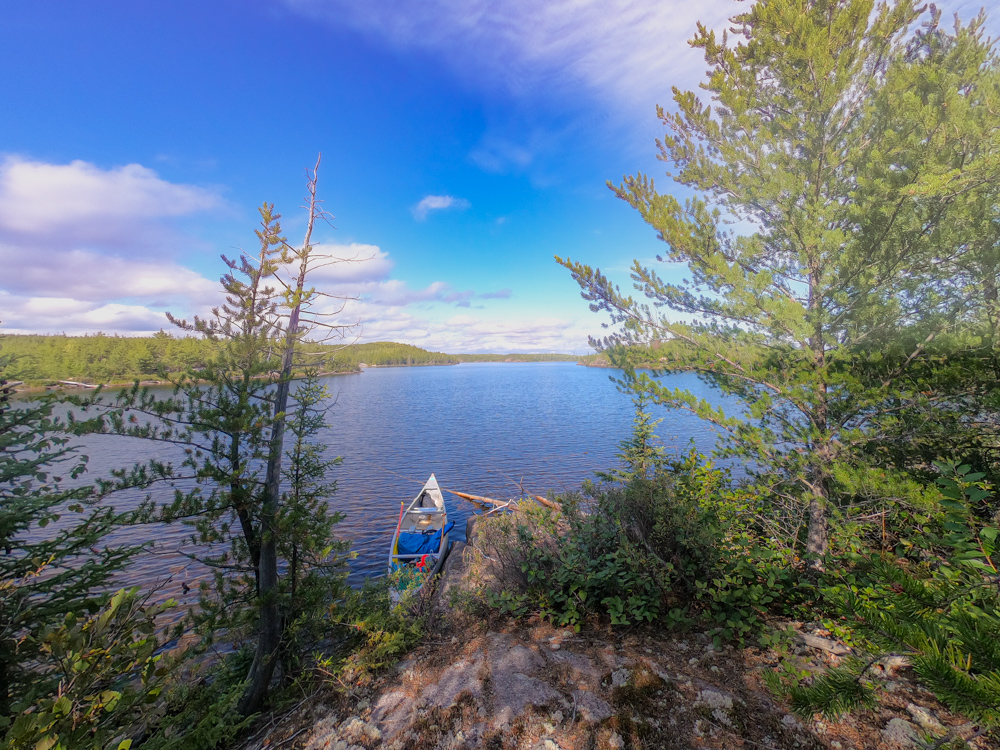 Return to the humpback island and the first bay

I spent three nights on Maraboeuf Lake. A pattern developed itself. I would paddle back north to the bay, fish for several hours, filet three or four fish on the island, paddle back to camp, enjoy a wonderful fish fry over the fire. Can you imagine a better way to spend your days? 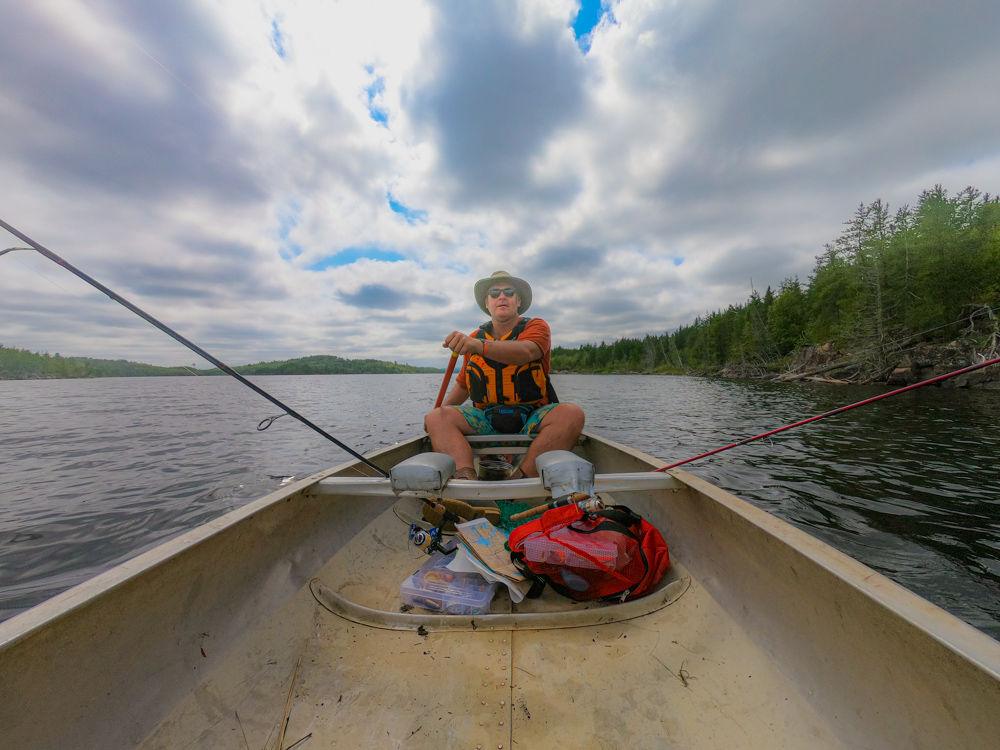 Paddling and trolling the shoreline to my honey hole.

The second day, I trolled the shoreline as I proceeded north, and I did not have much luck. Once I hit the bay, I once again enjoyed great success with sizable bass reeled in. Those went on the stringer, and I continued to fish catch and release style. Despite, warm water temps, the fishing was outstanding. 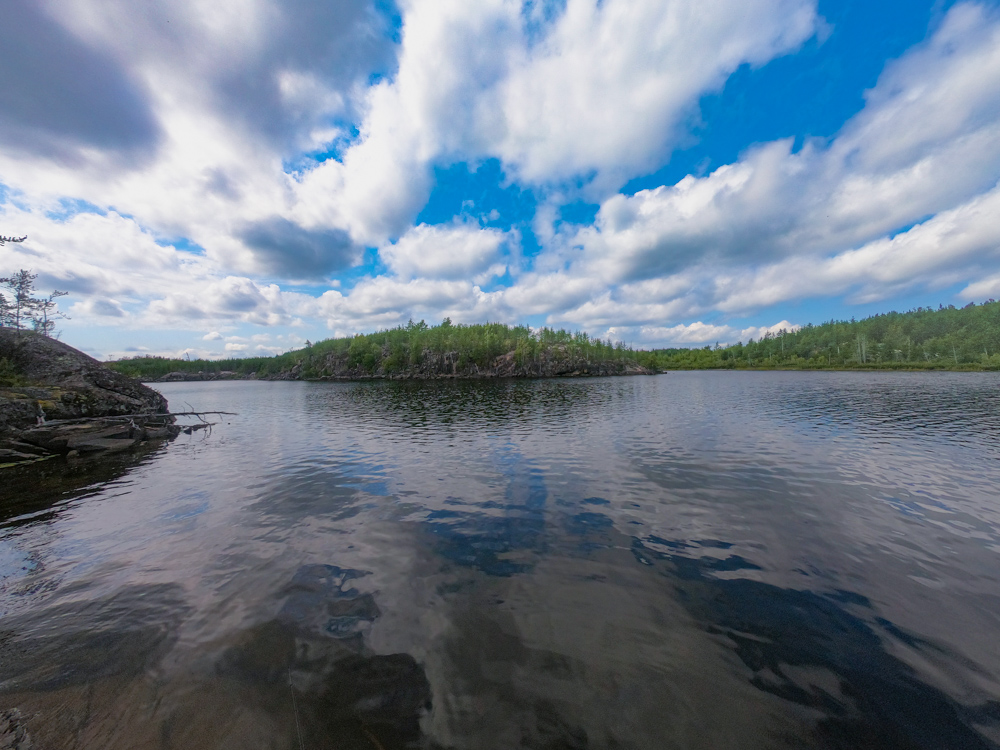 Here is the bay where all the action took place

Third day was the best fishing day of my life

At the end of the bay there was an almost circular or spoon shaped bay. A small stream emptied in from the marshland beyond. I did not fish this area the day before because I had so much success on the outer bay. 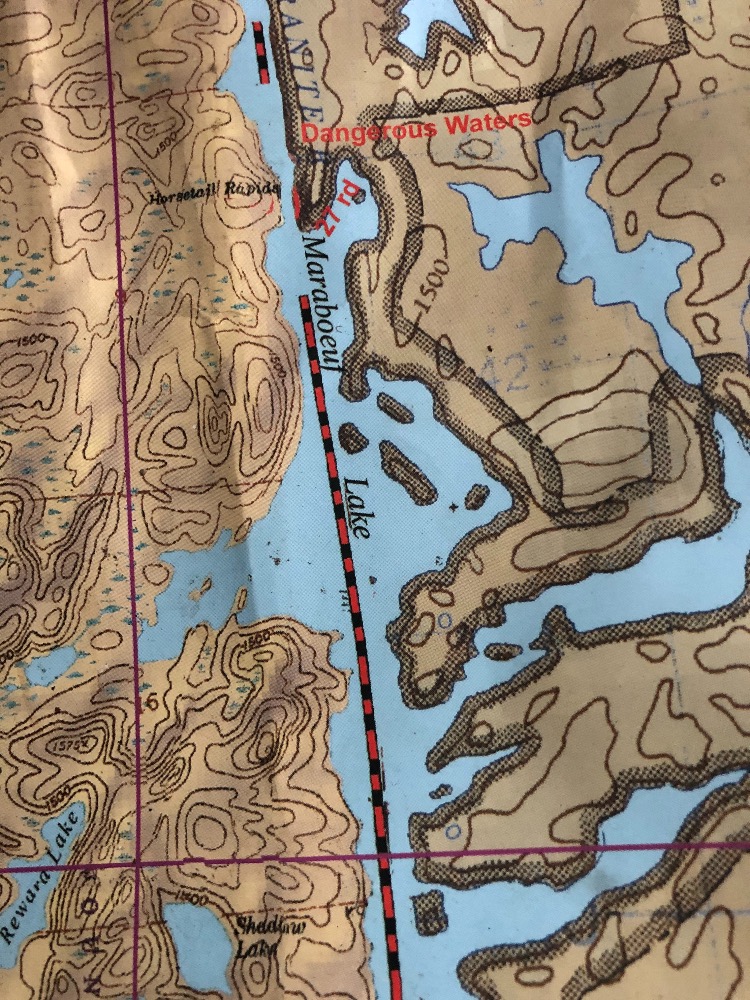 The first bay just south of Horseshoe Rapids was my honey hole. The farther back the better the action.

On my last day, I decided to explore a little further and penetrate the end of the bay. I am glad I did. As soon as my lure entered this part of the bay, boom, fish on.

A three or four pounder was soon on the stringer. The second cast ended with the same result. The fishing was so good, I knew something was askew with my lure if I did not quickly catch a fish. 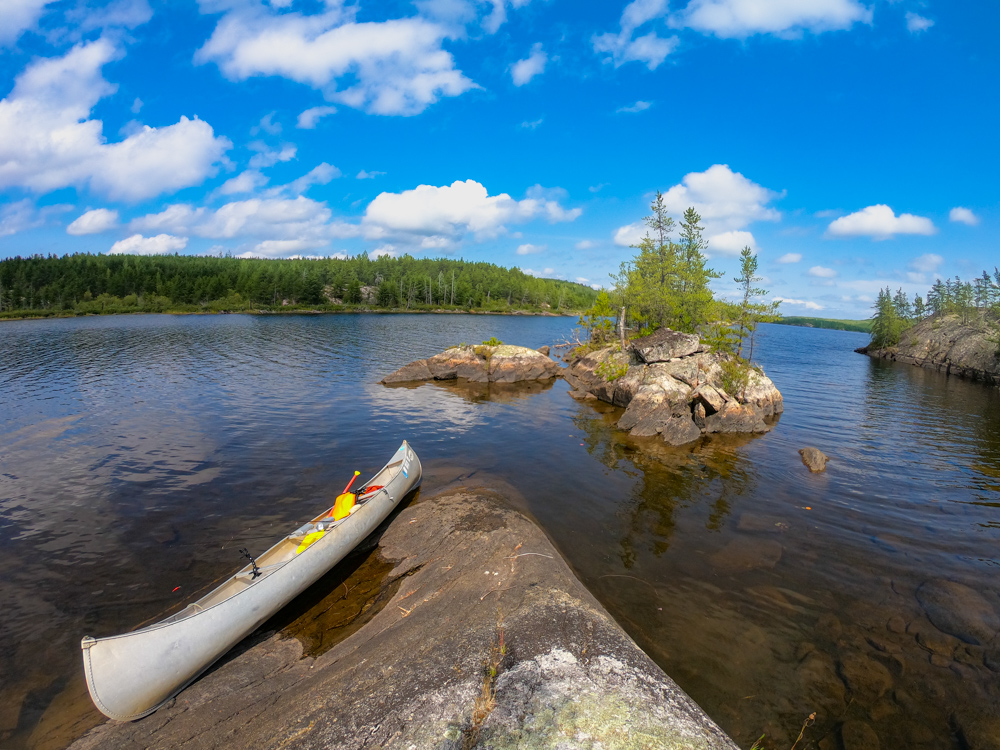 Maraboef Bay in the Boundary Waters

I must have caught seven smallmouth bass over three pounds. Overall, I caught 15 bass and one northern pike. This day capped off an already successful fishing trip. I wish I would have landed a walleye or two, but one cannot complain over nonstop smallmouth bass action. 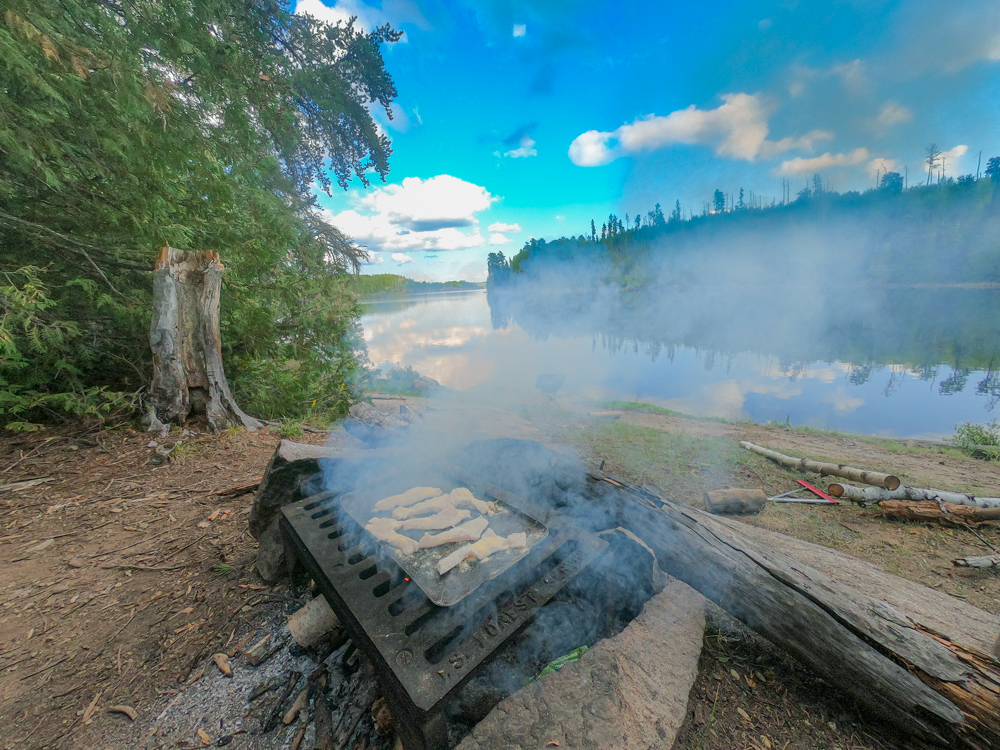 All my hard work paid off 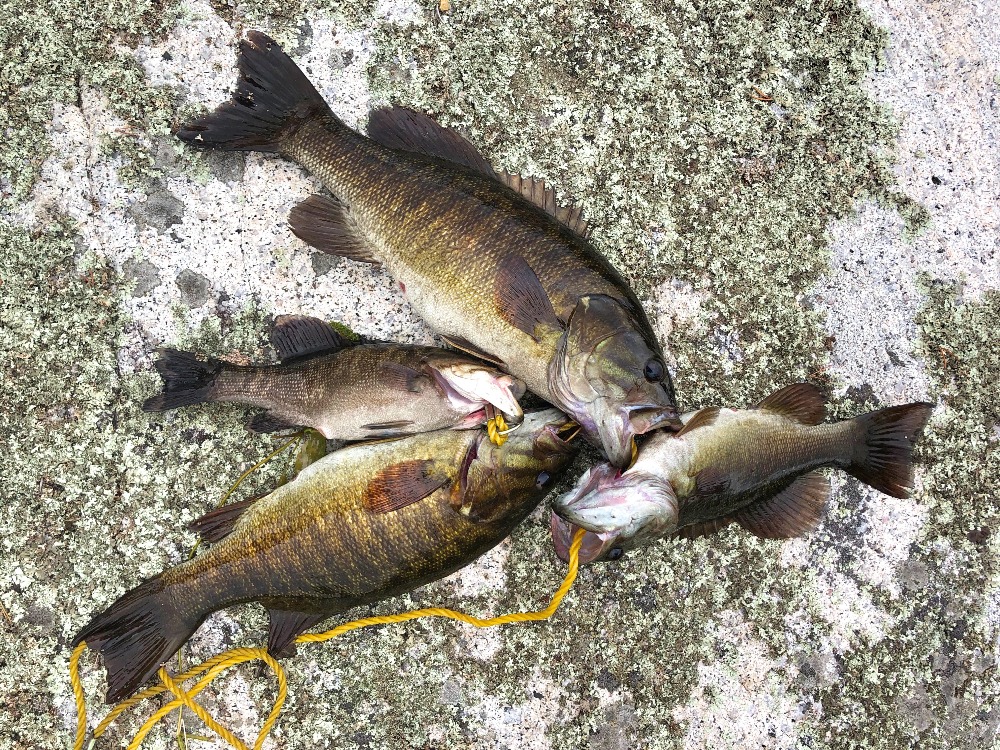 If you want to follow in my footsteps. Maraboeuf Lake is best accessed through the Gunflint Trail and Grand Marais. I highly recommend Voyageur Canoe Rental if you need any rentals, outfitting or a tow to Saganaga Falls.