When Chicago and Illinois went on lockdown during the stay at home order in March of 2020, Chicago area bird watchers were in a tight spot. This was especially true when Mayor Lori Lightfoot closed the Lake Michigan parks. This seemed to basically also close bird watching Chicago. 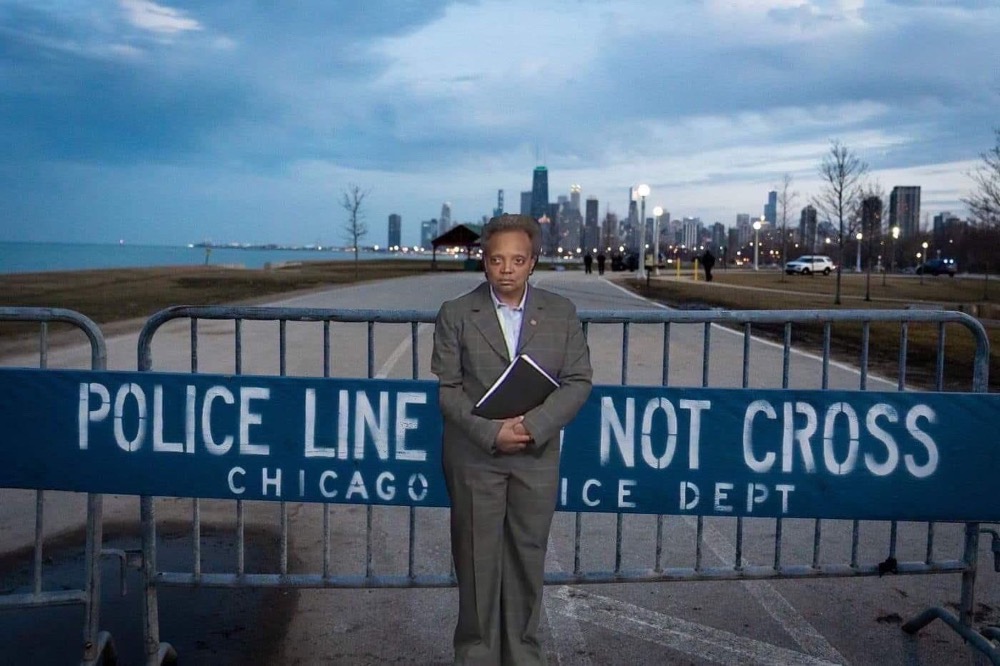 Lori Lightfoot closed down the lakefront parks to the detriment of Chicago area birdwatchers. A plan B had to be developed.

Mayor Lori Lightfoot then closed the Lake Michigan parks, which included birding hot spots Northerly Island, Montrose Point Bird Sanctuary and its magic hedge, and Jackson Park. This was just as snowy owls were moving out and an influx of migratory birds were starting to fly through Chicago. 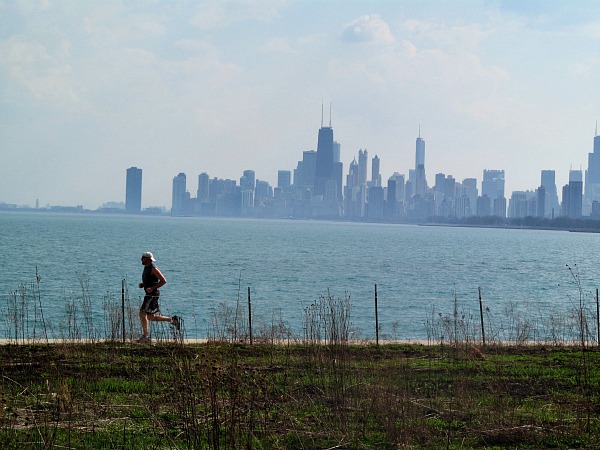 A view of the city from Montrose Harbor bird sanctuary

This left places like local forest preserves, parks along the Chicago River, and Lincoln Park as substitute options; however, I found another option. I started to observe birds out my window in Albany Park, Chicago. I live in an urban area, but I have a huge tree right in front of my window. Also, I live somewhat close to the Chicago River, so there is open water, and good bird habitat nearby. 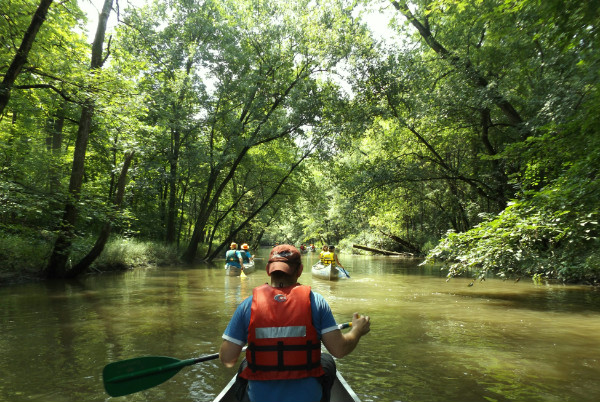 The North Branch of the Chicago River

With the world on pause, I sure had a lot of time on my hands since schools were closed, so I could not substitute teach. I spent a lot of time on my computer following the news on the global pandemic. I moved my desk to the living room right in the center of my bay windows looking out on Eastwood Ave. This meant I had four windows at different angles looking outside. 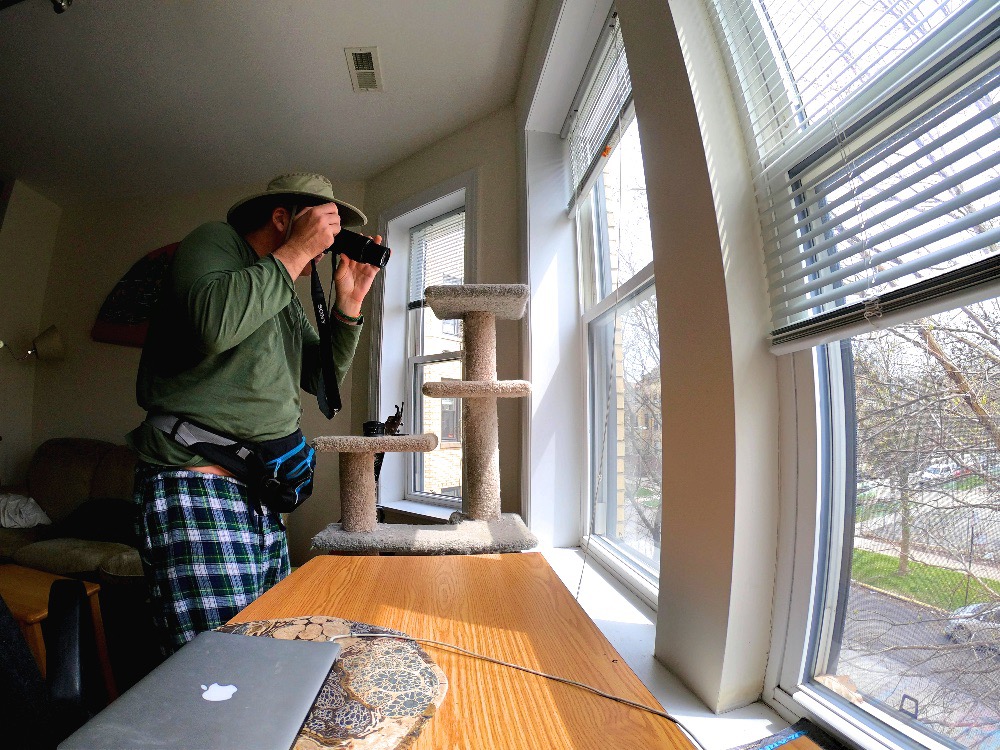 Most people would think that all you would see out a window in our urban environment would be robins, pigeons, house sparrows, and starlings. I did see these bird species, but I began to see a host of more interesting types as well. 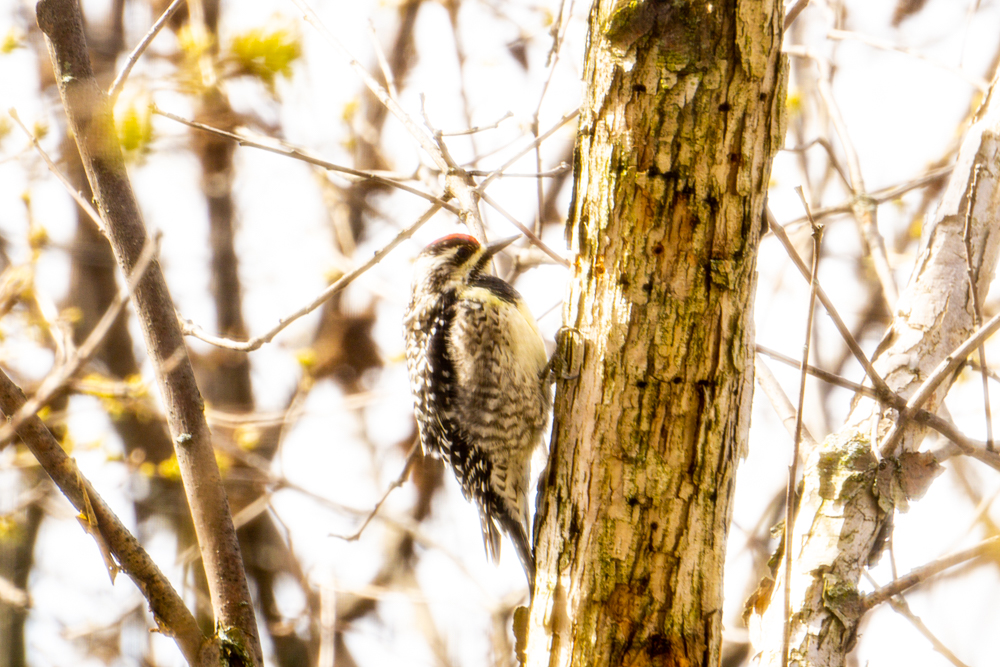 Downy woodpecker out my front window 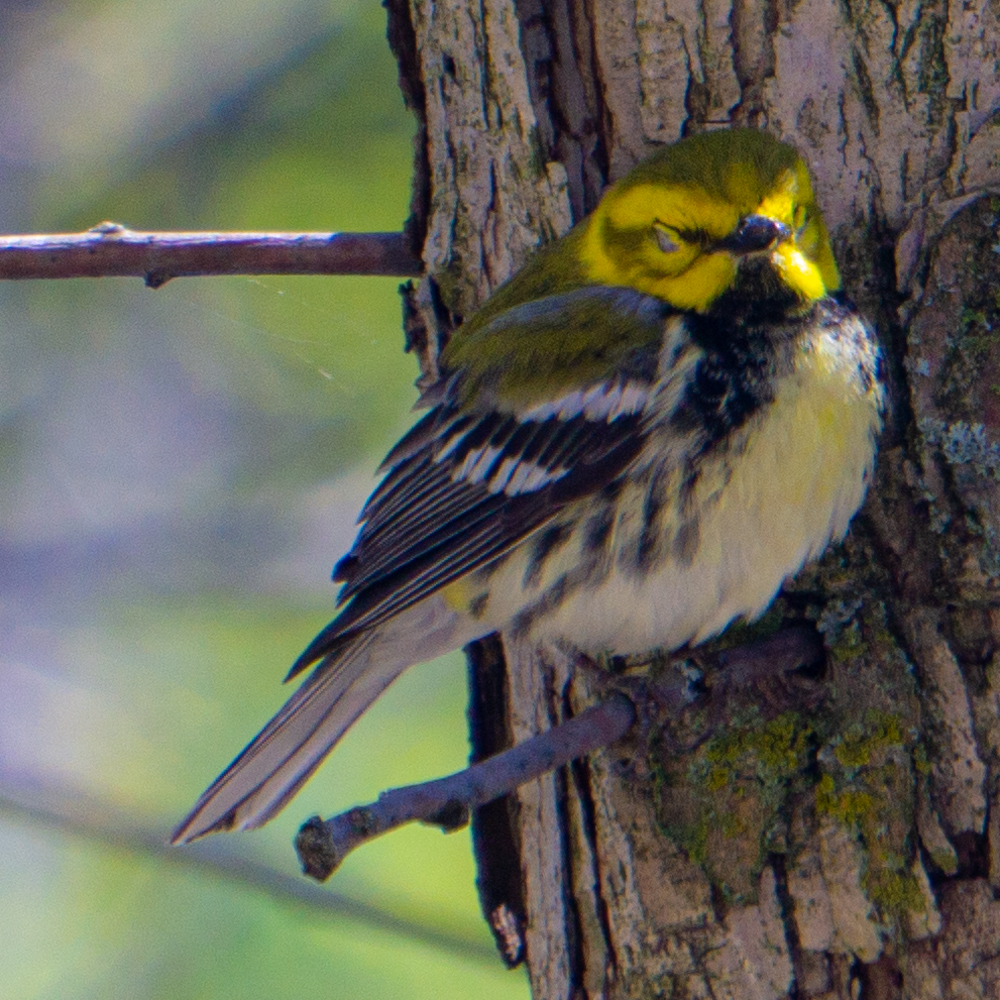 Soon after, I saw a beautiful yellow warbler. It did not stay long enough for a good picture, but it was either a magnolia warbler or perhaps a Canadian warbler. The first cool bird of interest that I saw and was able to photograph was a black-throated green warbler. 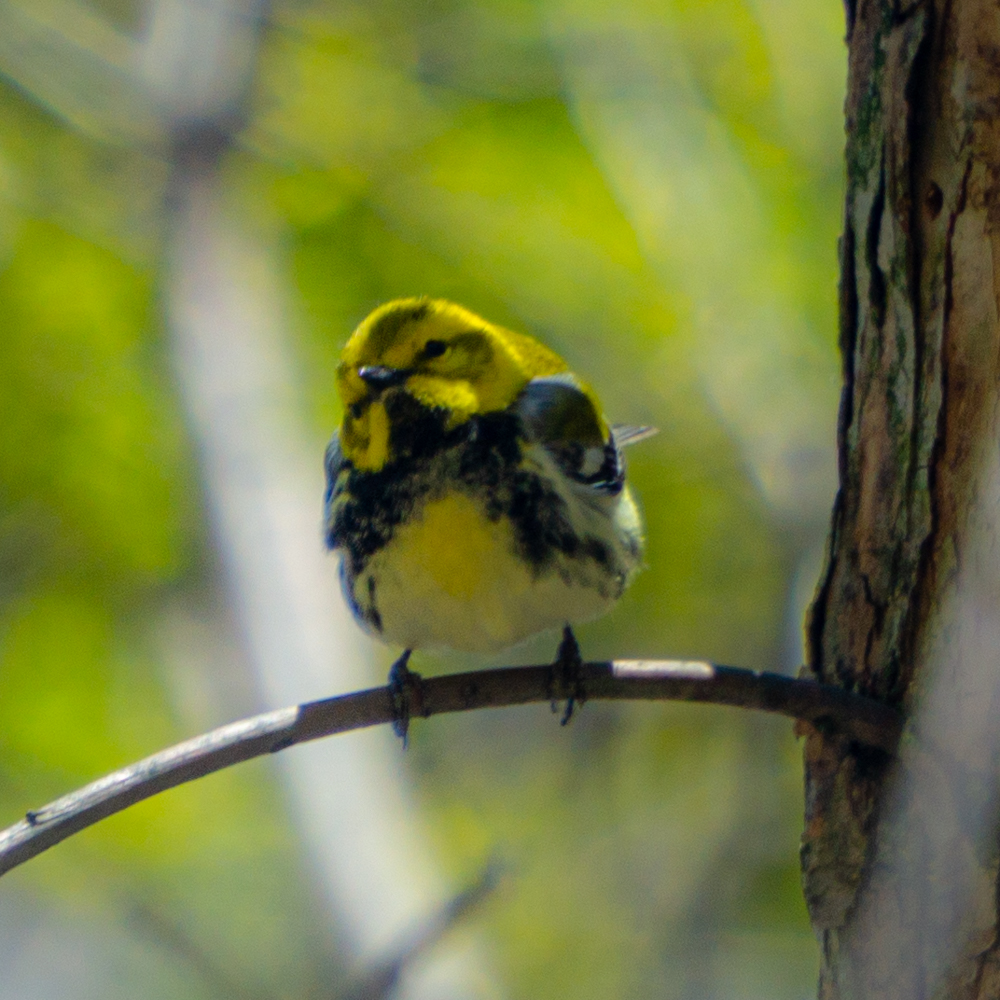 This bird was probably the easiest bird I have ever photographed. Warblers are notoriously difficult photograph subjects, but this one seemed to fall asleep on the branch outside my window. 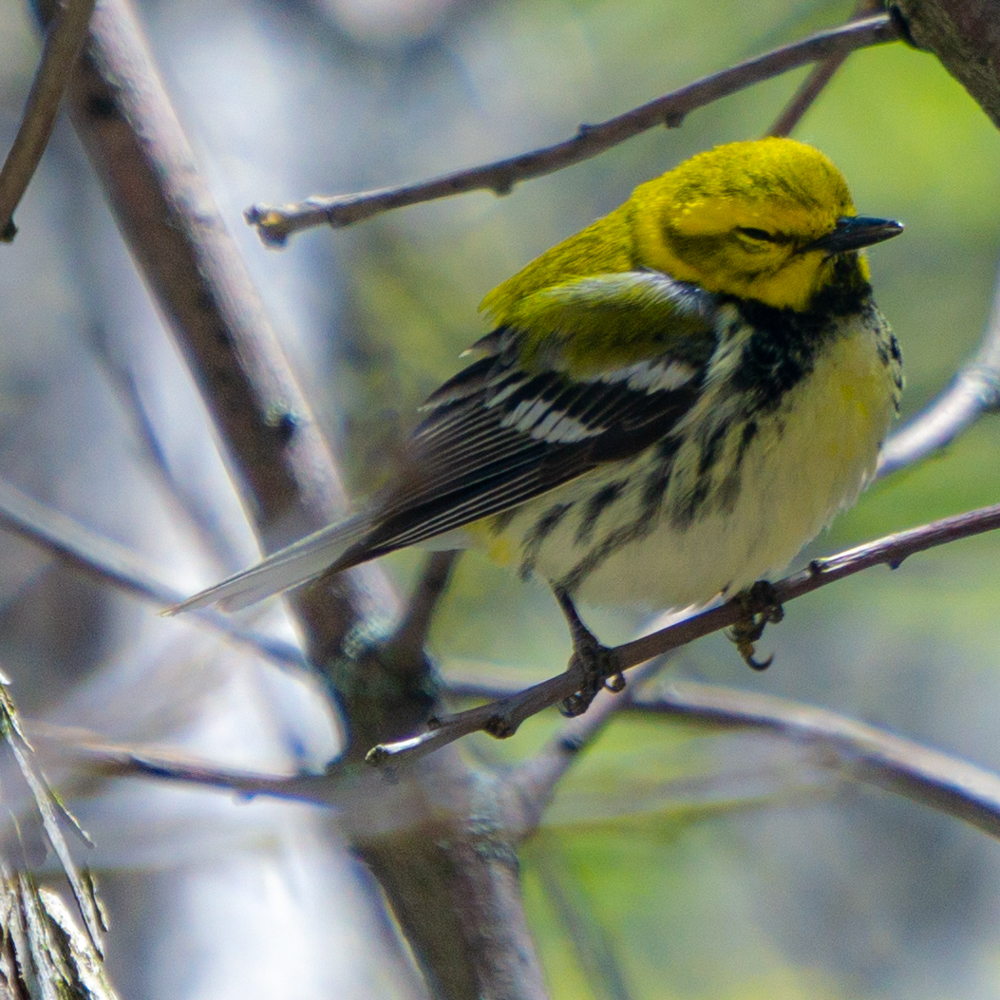 Another look at this beautiful warbler

Over the next month, there seemed to be at least one interesting bird come through my tree each day. Highlights included a blackburnian warbler, an American redstart, American goldfinch, cardinal, and a Canadian warbler. I could not believe how many interesting birds just floated past my window. There was never any wave of birds, but a consistent bird or two per day. 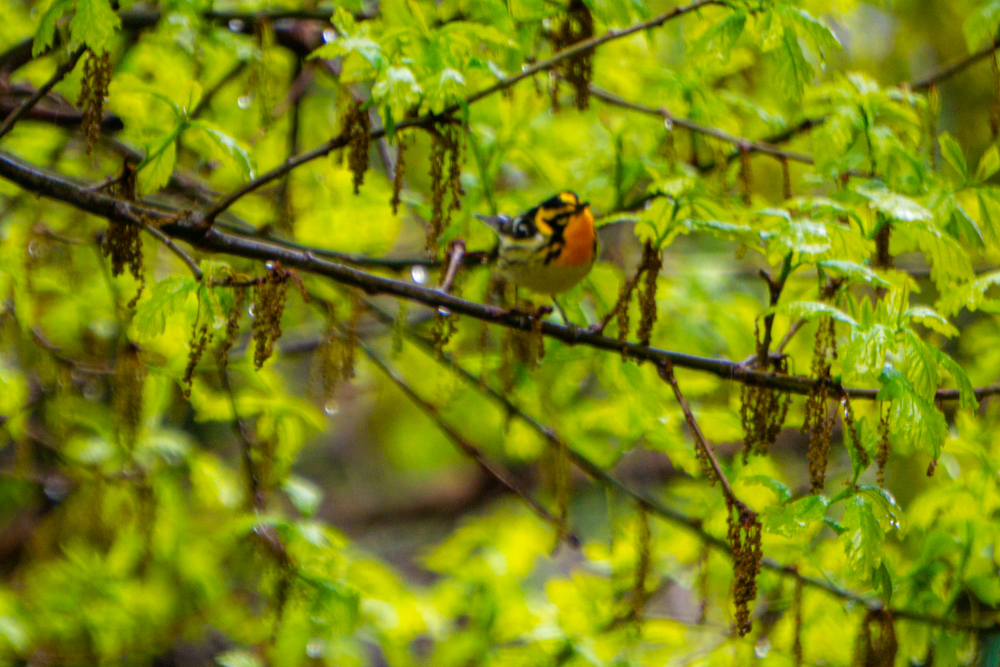 Canada Warbler sighting is the highlight

Besides looking out my window, I did make several trips to local forest preserves and to Midewin National Tallgrass Prairie. I saw many different kinds of migratory birds during these trips, but I never saw a Canada warbler. 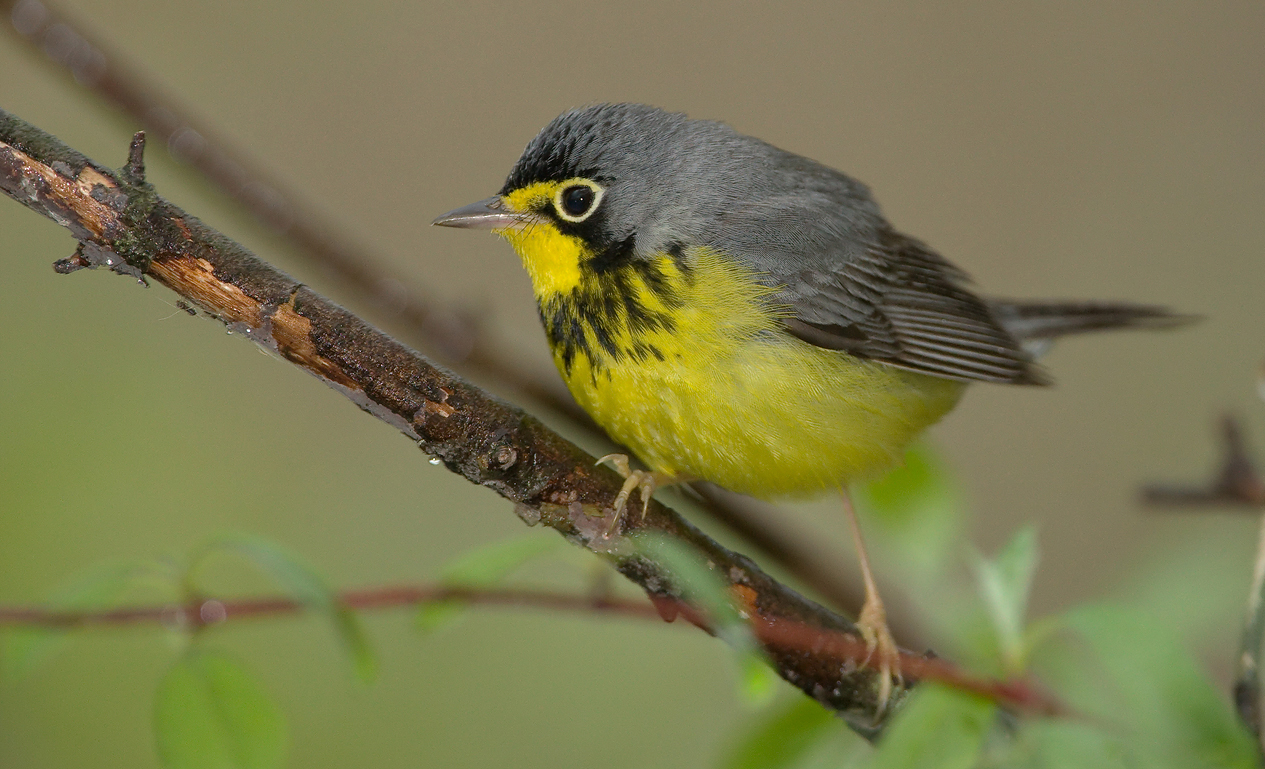 Grabbed this picture of a Canada warbler from Wikipedia – By William H. Majoros – Own work, CC BY-SA 3.0, https://commons.wikimedia.org/w/index.php?curid=16127252

I remember saying to myself that I wished I would have seen this bird this spring. Ten minutes later looking out of my window, a Canada warbler momentarily landed on the tree branch right out front. Unfortunately, it took off right away, so no photo opportunity. 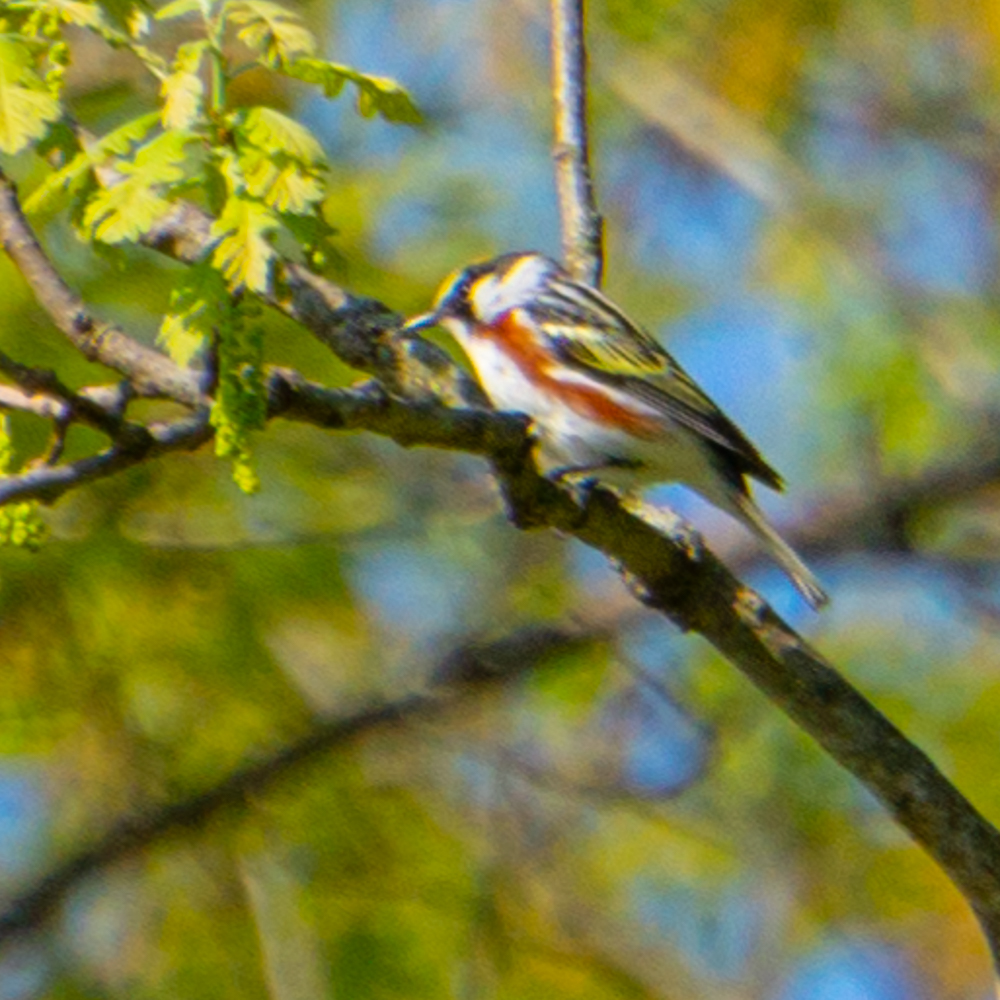 Chestnut-sided warbler (not seen out my window, but seen at Ryerson Woods)

I have to thank the Illinois Birding Network Facebook page for inspiration. The daily bird pictures posted by members was an inspiration and an education on all the variety of species that come through Chicago, spring and fall, each year. 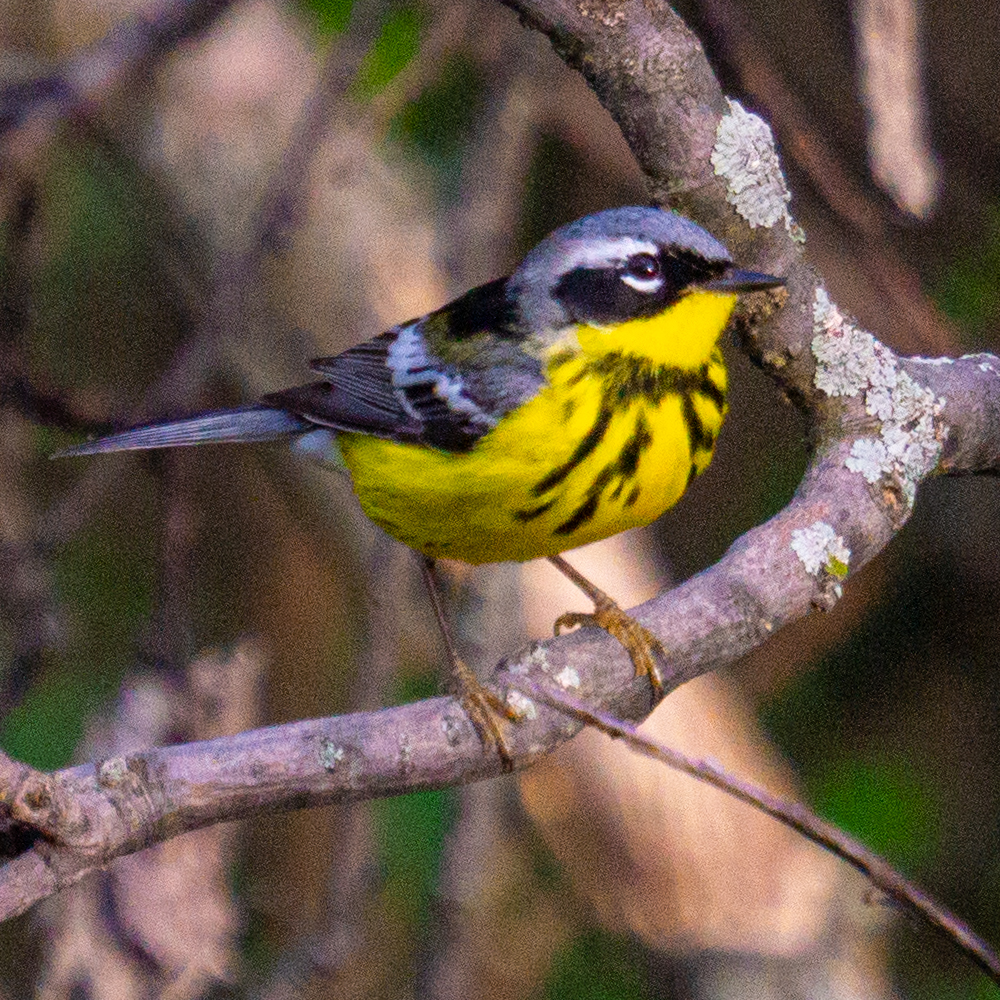 If you are interested in getting started birding, I would definitely do it in May. That is the best month. Also, be sure to follow the Illinois Birding Network on Facebook. The Chicago Park District also runs occasional birding walks. 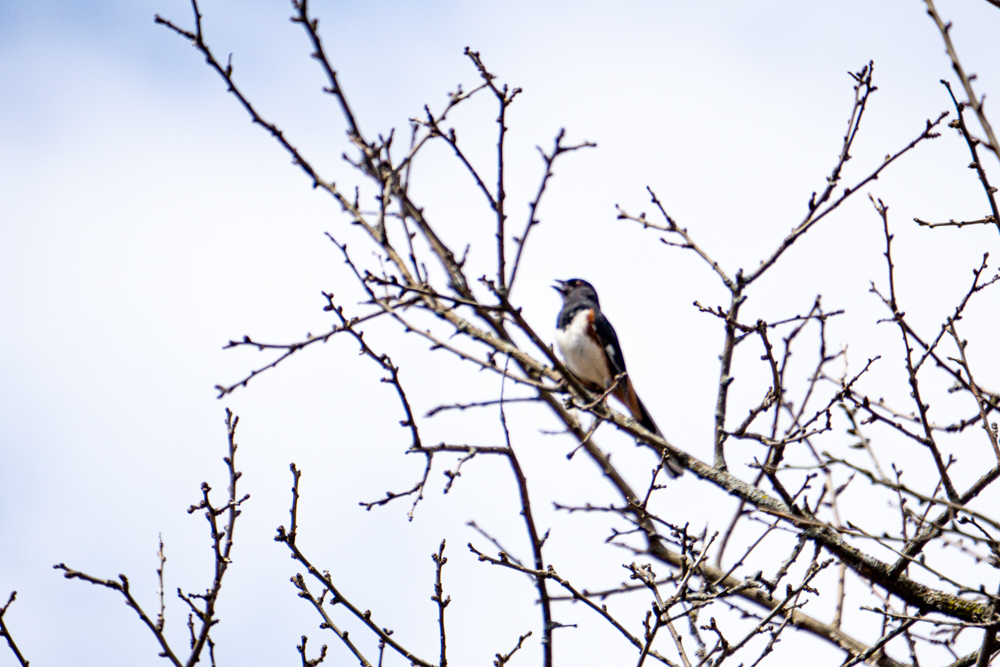 Illinois is actually a surprisingly great place to bird. You have Lake Michigan on one end, the Mississippi River on the west end, which are both crucial geographic features for birds. Inland you have prairies, rivers, and forests, so there is quite a variety of ecosystems meaning a variety of species, and this just explodes during migration. 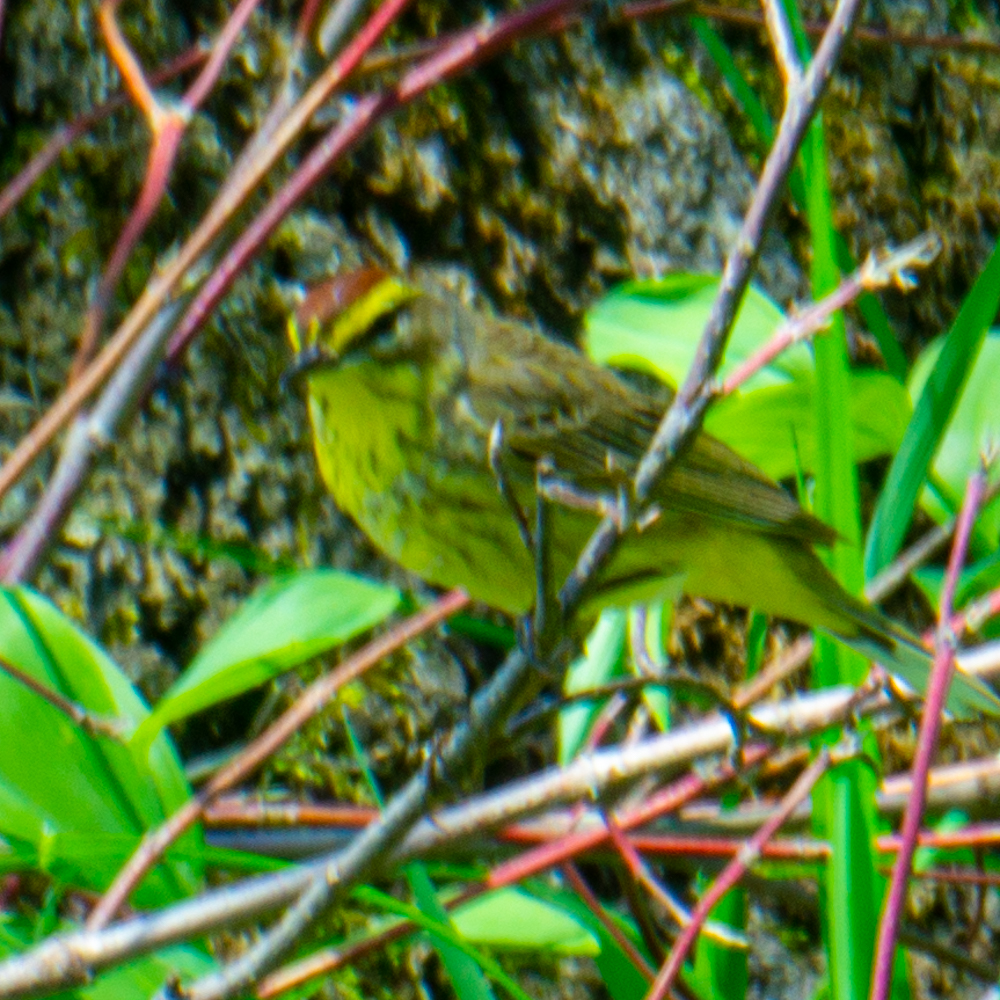 I would also recommend finding a good spot to observe and staying there. You appear a bigger threat to birds when you are walking around. If you stop and stand or sit in one place, birds will start to get used to you and even forget you are there. Then they will fly close to you and land in nearby trees. 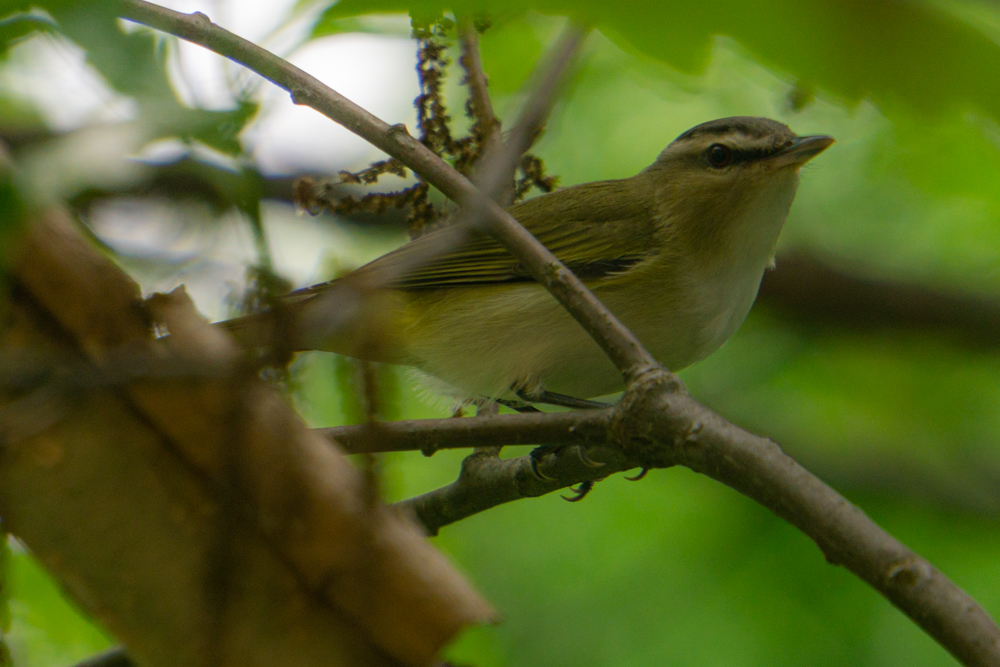 I was even challenged by the birds out my window. It took me pain staking research to identify this red-eyed vireo. Still not 100% sure of its identity.

Don’t forget a tick check especially in the spring

Spring is also the height of tick activity. I pulled three ticks off of me after visiting Ryerson Woods in late May. When you are in the woods in early spring, I would recommend taking a shower when getting home and doing a thorough tick check. 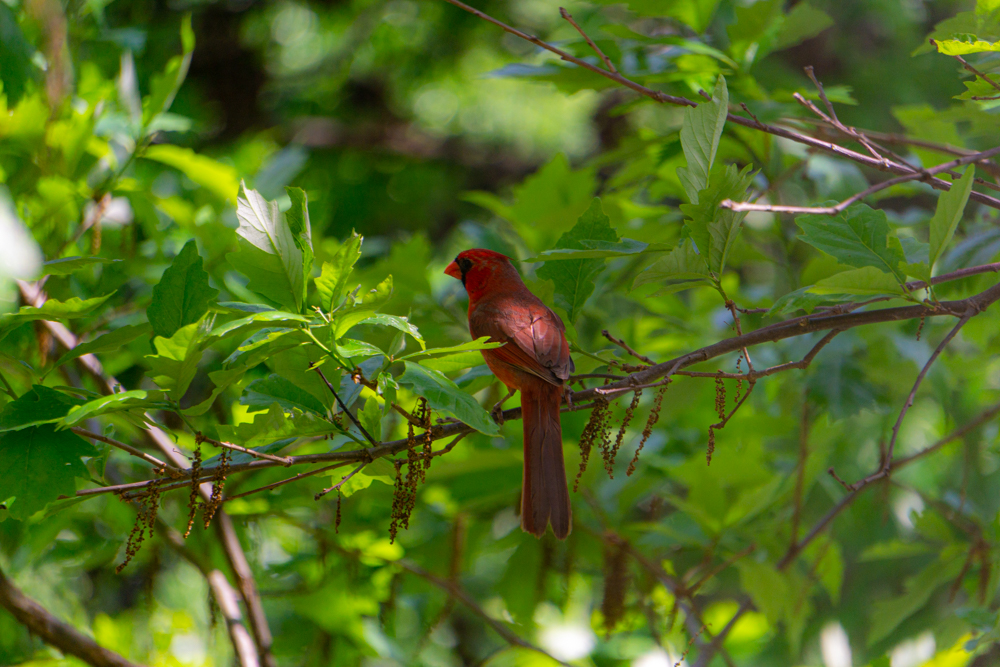 Never get tired of seeing the state bird

I recommend finding a birding area that is near water. It is easier to see birds where there is a break in the trees, and they tend to congregate near water because there is more food there. Another plus is you can find woodland birds at the edge of the water and see water birds like ducks, herons, egrets, and rails in the water area. 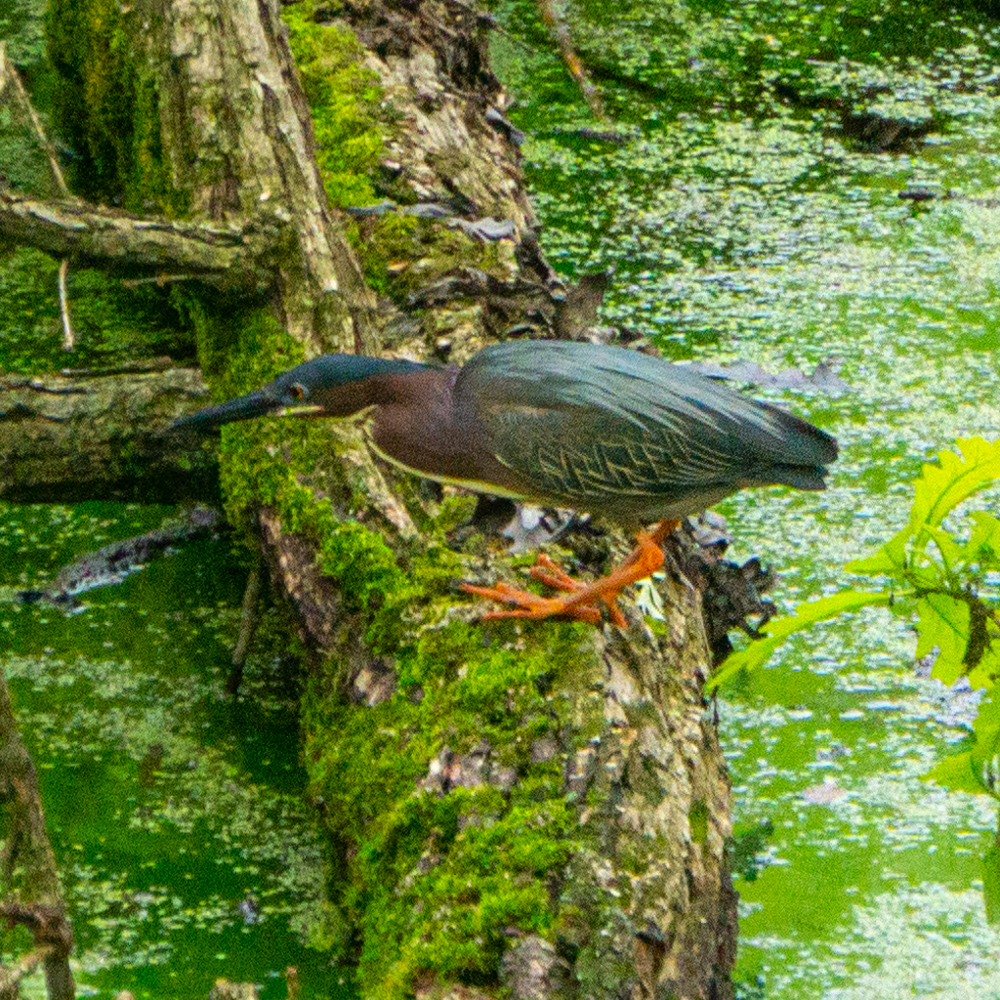 In Chicago this means Montrose Harbor Bird Sanctuary, River and Ronan Park along the Chicago River, LaBagh Woods, Humboldt Park, and Lincoln Park. I have also heard that the Graceland Cemetery on Clark is a good spot during migration. 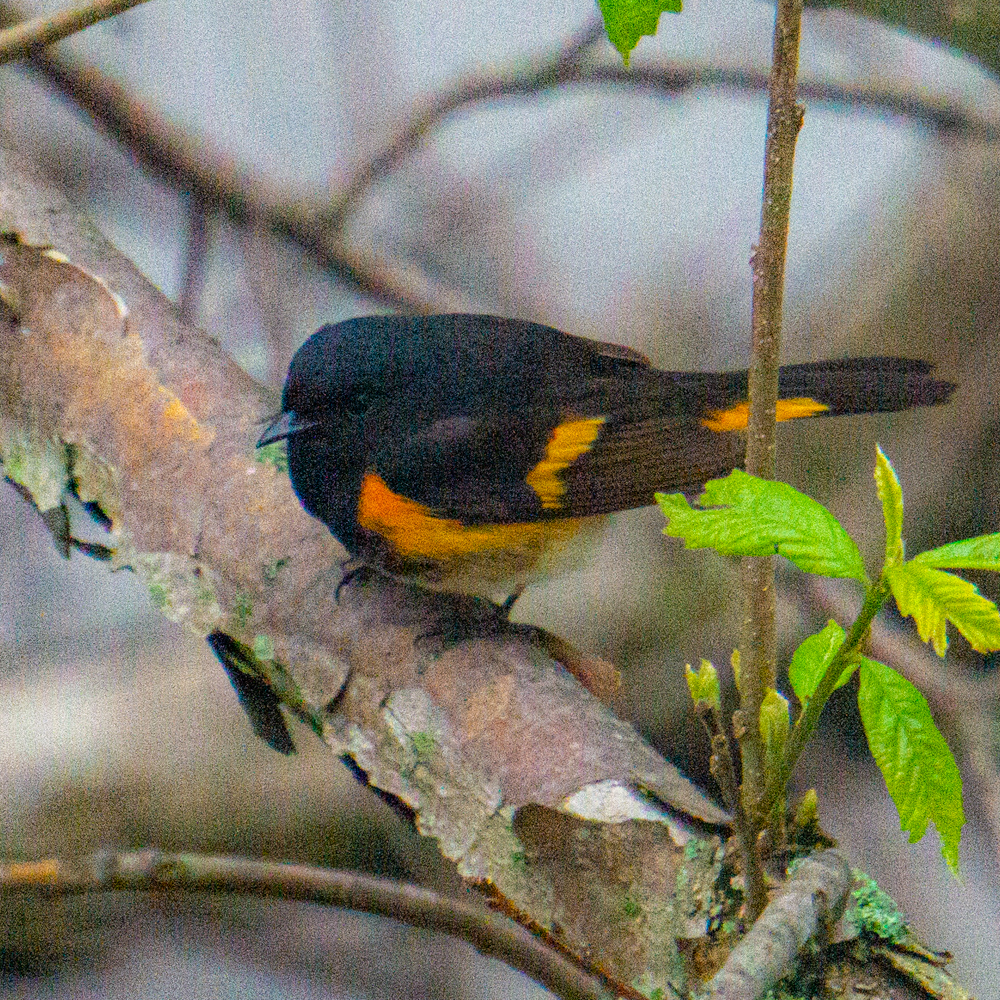 American redstart out my window

Some good spots outside of urban Chicago include forest preserves like Busse Woods, Moraine Hills State Park, Bakers Lake Nature Preserve, Ryerson Woods, and Midewin National Tallgrass Prairie. There are many good forest preserves in the south suburbs like Orland Grasslands and Ottawa Woods. Check out this comprehensive list from the Chicago Audubon Society.

Everywhere is a good place for birds

The key is to always keep your eyes open. Whether you are on a birding excursion or just sitting in lockdown and looking out your window. You never know what might stop by.