I thought I knew just about every canoeing trail in the state of Wisconsin. I have either paddled them myself or heard of them through Canoecopia, pictures on social media, or heard stories from the adventures of other canoeing friends. Therefore, it was a surprise to hear of three new streams off my radar from Bull Moose Patrol. After a Halls Creek canoeing adventure, I now have a favorite go to stream close to Chicago. 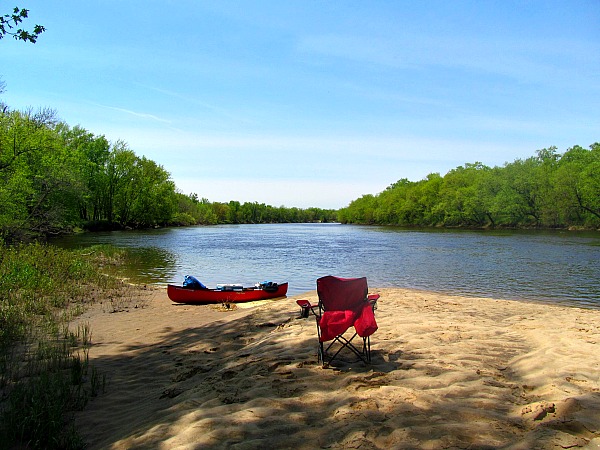 Scouting trips do leave me a little leery

I was a little leery in one sense though. Scouting trips can sometimes be pretty tough. I remember as a kid paddling with my dad on the Kickapoo when we were talked into paddling a section of the Kickapoo farther downstream from the traditional Ontario to LaFarge route. We scouted the section south to Reedstown, and it was a disaster. There was one logjam after another, and we did not get off the river until dark.

Fortunately, this trip did not turn into anything as extreme. We did experience some difficulties. The water was a little low, and we dragged bottom at times, and even had to portage a few unnavigable rapids. Despite the obstacles, it was a great day of canoe poling.

We settled on paddling Halls Creek after scouting a few put-ins and take-outs. Our adventure on Halls Creek started at the Garage Road bridge and ended at confluence with the Black River at Halls Landing. The put in at Garage Road had room for one or two cars and had a path down the hill to the landing spot. The take-out was much better. It had a boat landing and plenty of parking up the hill. A beautiful partially submerged sandbar marks the delta where Halls Creek flows into the Black.

A look up Halls Creek from the Black River

We left my car at the put-in and Scott’s truck at the take-out. We finally got on the river in the early afternoon. Scott was coming from Minneapolis, and I was coming from the Kickapoo River. We met around 10 a.m. at the famed Orange Moose and then did some scouting, so it took awhile to get on the river.

We were immediately smitten by the beautiful scenery. The river was mostly in a canyon with many huge pine trees reaching skyward. Limestone cliffs rose from shoreline as copper colored water flowed over gravel and sand bottom with occasional sandbar banks. Most of the day was spent outside the boundary of the Black River State Forest. We went under a bridge at County E, and this bridge was the border of the state forest. The last two miles went through state forest territory until we reached the Black River.

This picture perfectly sums up the Halls Creek canoeing adventure – Shallow water making me almost fall. You can see the depth of the river valley in the background with tall sky high pine trees

Despite not being in the state forest most of the day, it felt like we were. In fact, at times, we thought we were in a Canadian wilderness area. There were a couple of homes along the river, but most of the time, we could see no indication of civilization. There was development near the creek, but due to the depth of the canyon and the lush vegetation and forest along the river, we rarely saw signs of human presence. We also did not see another paddler the whole day.

Halls Creek canoeing – The fern life along the shoreline was ferntastic

Wisconsin has seen a lot of rain this spring and summer. The shoreline was thick with ferns and other green vegetation. It looked similar to a tropical rainforest at times when there was no rock outcroppings to gawk at.

Halls Creek canoeing – Pausing after a portage due to low water

There was a lot of small rapids, ledges, and rock gardens along the way. Most of them were in the class I and easier range, but a few were class II. Due to the water level, we could not run the bigger ledges near the end of the trip. We portaged two of the bigger ledges and lined the canoes down a third. We bounced off countless rocks, shoals, and ledges. The low water was enough of a nuisance to be a little aggravating, but not bad enough to ruin the trip. We learned the best time to run these creeks are in the spring and early summer.

Halls Creek canoeing – Another unnavigable rapids due to low water

The creek turned out to be an ideal spot for canoe poling. Again, it would be much better with a little more water. We each stumbled forward and backward a couple of times when bouncing off rocks and the bottom, but that is expected when standing in the canoe on a shallow fast moving creek.

Scott and I agreed that Halls Creek was one of the prettiest streams we have paddled and the remote feeling made it even better of an experience. We saw several deer and a few bald eagles as we approached the confluence with the Black.

Black River State Forest proves again it is a winner

No matter what your outdoor interest is, the Black River State Forest Area excels in that niche. Whether it is hiking, canoeing, fishing, camping, swimming, skiing, ATV, hunting, wildlife viewing, or just simply being outside in a beautiful area, you cannot go wrong in this part of the state.

What is great about the Black River State Forest is it is the closest area to Chicago that has that Wisconsin northwoods feel; yet, it does not have that Wisconsin northwoods drive. It is just under four hours from Chicago. In fact, it is close enough to do a day trip here either canoeing, hiking, or skiing, but there is so much to do here, it is better to say a couple of days.

Traveling Ted newsletter
Your information will *never* be shared or sold to a 3rd party.
10 shares