I am not sure what the proper name of these ski trails are called. They could be called a myriad of names. They are located in the Sylvania Wilderness area in the Ottawa National Forest. The trail system begins at the Sylvania Outfitters located in Watersmeet, Michigan.  Skinny Ski calls it the Watersmeet Ski Trails, so I will follow accordingly. 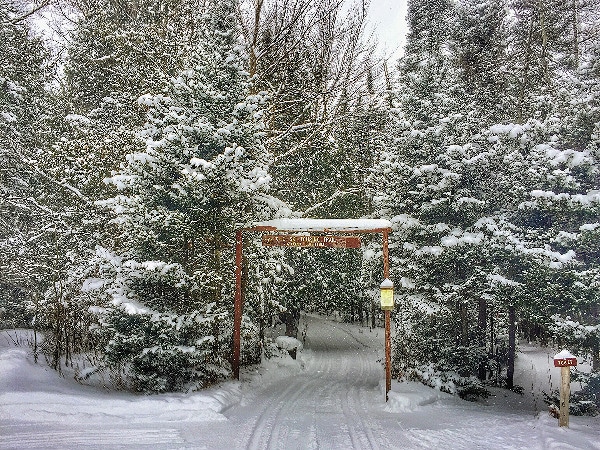 I drove up to Iron Mountain, Michigan the night before. A freezing rain storm washed away most of the snow in central and southern Wisconsin and northern Illinois. I chose to spend my New Year’s in Iron Mountain because that was pretty much the snow line. I made good time to Green Bay, but as soon as I hit Crivitz, Wisconsin it was a white out. The last hour to Iron Mountain took two hours. Bad driving conditions equal great cross-country skiing as the already quality snow in the area got about six more inches. 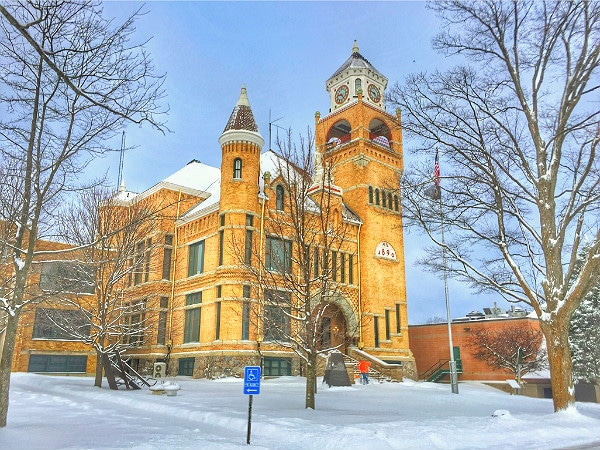 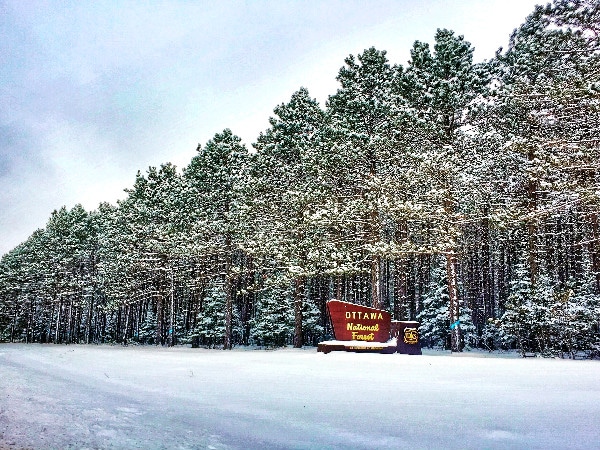 I absolutely love skiing the day after a storm. I knew that the already beautiful Upper Peninsula of Michigan would be pristine with a new blanket of snow. From Iron Mountain, the drive to Watersmeet was about an hour and a half. I went through picturesque towns like Iron River, Crystal Falls, and also drove through the Ottawa National Forest before finally making it to Watersmeet. 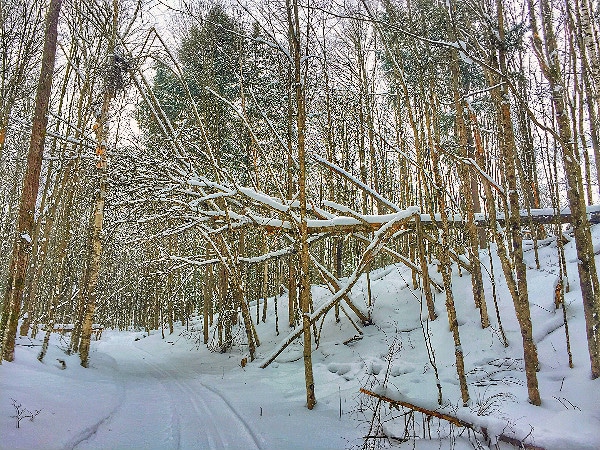 Down tree along the Watersmeet Ski Trails

Checking in at Sylvania Outfitters

I was the first car in the driveway and paid my $10.00 daily ski fee at Sylvania Outfitters. I was given a map and oriented on how the trails work. Some trails are two-way and some are one-way, so you have to pay attention to the signs and the map to avoid going the wrong way. 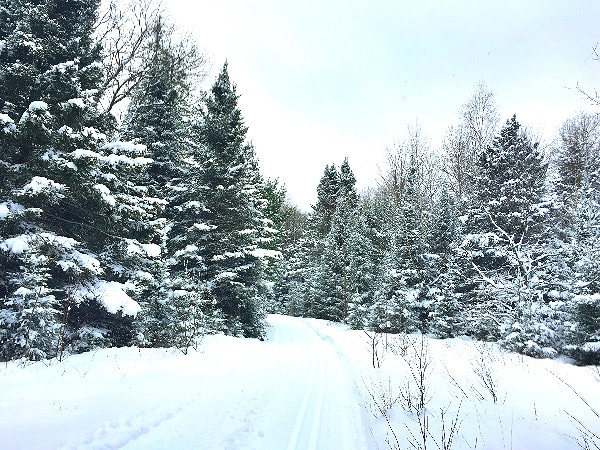 There is a little wooden archway that signify the beginning of the trails around back. I took a picture of the beginning and commenced skiing. There are a number of loops and trail junctions. I just kept hanging rights thinking this would get me to the end of the trails. I was told it was mainly uphill going out and downhill coming back.

The woods were absolutely gorgeous with a new batch of snow. The woods were a mixture of hardwood and coniferous. The pine trees were especially amazing. There were a couple of really scenic groves where the trail barely had enough room to squeeze through creating a pine tunnel. 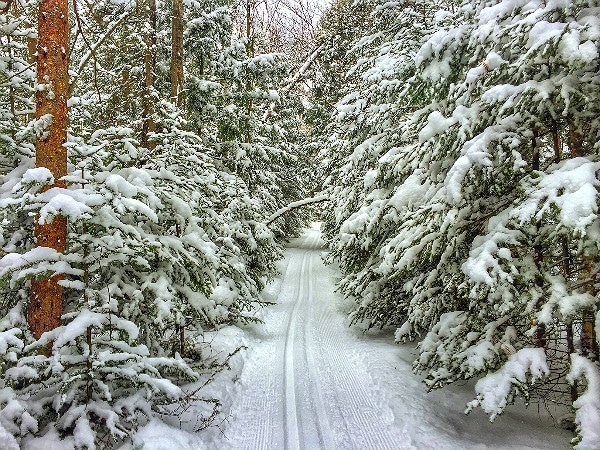 The terrain at the beginning is rather tame, but there are a couple of good downhill areas closer to the Outfitters. The loops at the end of the trail were even better. Once I got to the end of the trail system, I kept repeating the back end loops. The end of the trail is better for hills and for solitude. I saw only one skier for the majority of my time on the trails, and they veered away on another trail before I could pass them. The parking lot was empty when I arrived, but when I finished, there were about ten cars in the parking lot. I saw a few more skiers when I finished coming back, but I had the far southern trails almost to myself. 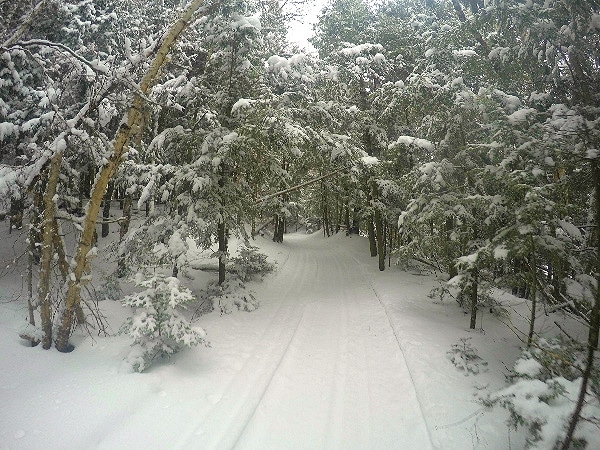 Usually when a new snow falls, it can take a day or two for the location to adequately groom the trails. It can make for some slow skiing with new snow. This was not the case here as they obviously did some grooming in the morning as most of the trails were in peak condition. The back end loops were not as well groomed yet, but after a few loops, the tracks that I set became faster and faster. 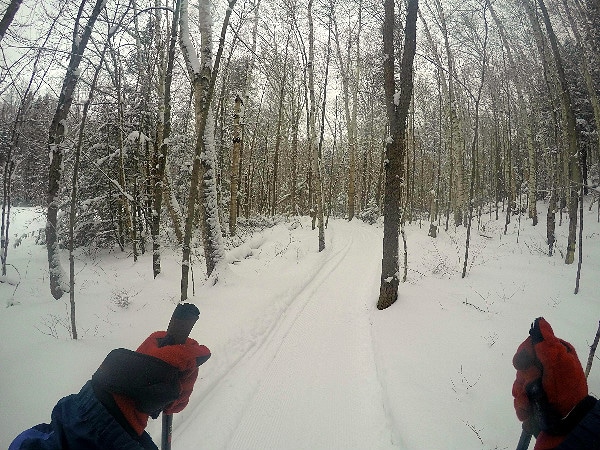 Skinny Ski did not let me down when they published reports from the Watersmeet Ski Area. Not only were the reports accurate, but they also led me to a new skiing area. I love finding new ski areas. You never can have enough options especially when the snow is not very good throughout most of Wisconsin. You can pretty much count on the Upper Peninsula to have snow when many areas do not, so I was glad to find that the Watersmeet Ski Trails had such quality trails and terrain. I definitely will be back. Sylvania Outfitters not only maintains the trails, but they also provide rentals. So give them a call if you need to rent skis.